Today NetApp launched the latest release of its data management software, NetApp ONTAP 9.9. On top of the new software launch, NetApp has also announced enhancements to its hybrid cloud portfolio. These include reductions in costs and complexity along with what they are claiming to be a simple, unified data management across on-premises and public cloud.

Today NetApp launched the latest release of its data management software, NetApp ONTAP 9.9. On top of the new software launch, NetApp has also announced enhancements to its hybrid cloud portfolio. These include reductions to costs and complexity along with what they are claiming to be a simple, unified data management across on-premises and public cloud.

Here at StorageReview, we’ve been talking about ONTAP for quite some time, particularly since the 9.0 update. It is no surprise as ONTAP 9 is the software base for most of NetApp’s hardware and the foundation for its hybrid cloud. NetApp has really gone out of its way to keep the software user-friendly and adapting along with the changes in the industry. ONTAP extended its reach beyond NetApp hardware a few updates ago when it was announced it works with Cisco FlexPods. As stated, it can be used with clouds as well through Cloud Volumes ONTAP.

This is where we would normally say, a lot has changed over the years, but recently the ONTAP updates are more of refining of the things that already work. From a simplification standpoint, the company states it has made automation easier, enhanced alerts, and this goes toward the automatic backup of on-prem data to StorageGRID and public clouds. ONTAP 9.9 has some more data protection with enhanced multilevel file security, remote access management, as well as continuous data availability and replication options for backup and DR.

The big selling point this go-round is all about performance. NetApp is claiming up to a 4x performance increase for a single LUN application such as VMware datastores.

ONTAP 9.9 comes with tighter integration with Cisco when it comes to FlexPod. The two companies are unveiling next-generation FlexPods that are designed to be a better foundation for hybrid clouds. 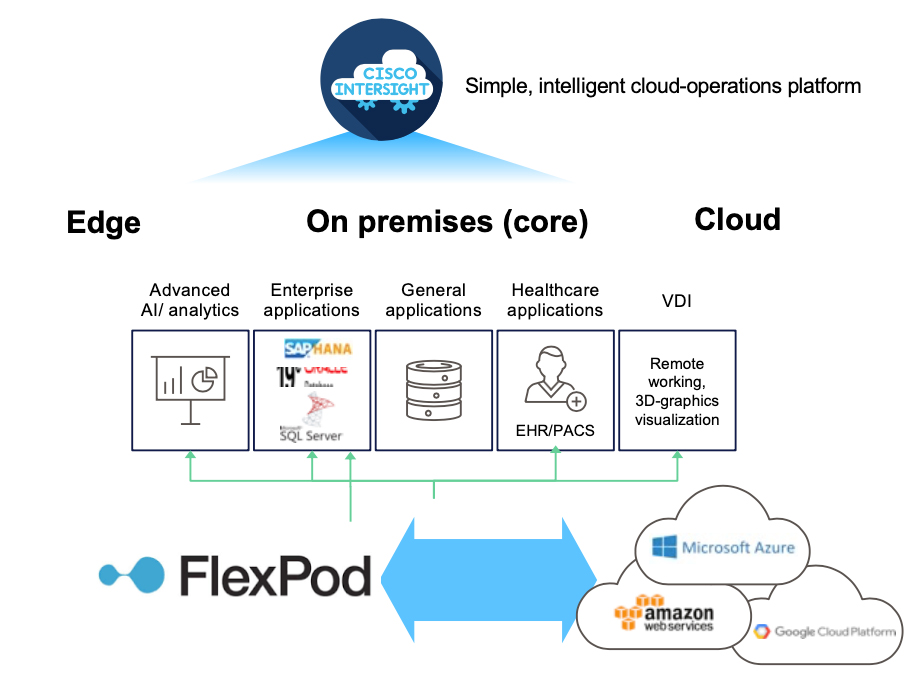 The new FlexPods come with intelligent application placement across on-prem and cloud along with automated hybrid cloud data workflows, and the ability to use FlexPod as a service. Users now have the ability to leverage Cisco Intersight to manage NetApp via integration with NetApp Unified Manager. FlexPods are also using the new blade/disaggregated USC X systems that we will have a write-up on in the next few days.

Continuing on the company’s push to be more cloud/aaS, NetApp is offering its Keystone Flex Subscription with Equinix. Users can access all the major cloud services (Azure, AWS, Google) without moving their data and all at low latency. Other benefits include: