Samsung has produced several high performing SSDs. Their 2.5”, mSATA, and M.2 all currently sit at the top of our leaderboard. Along with its high-performing and innovative SSDs, Samsung also updates its incredibly useful software suite including Samsung Data Migration (SDM) currently in version 3.0 and is Samsung Magician software (currently in version 4.9).

Samsung has produced several high performing SSDs. Their 2.5”, mSATA, and M.2 all currently sit at the top of our leaderboard. Along with its high-performing and innovative SSDs, Samsung also updates its incredibly useful software suite including Samsung Data Migration (SDM) currently in version 3.0 and is Samsung Magician software (currently in version 4.9).

While Data Migration is designed as a simple solution for users who need to upgrade from their existing drive to their new Samsung SSD, the Magician software is a management suite for optimizing, tuning, and keeping tabs on the health of the SSD. Essentially, Samsung's goal is to make the upgrade process as simple a transition as possible so that a novice or even a first-time upgrader can easily accomplish the task.

Samsung's Data Migration 3.0 is an extremely simple tool for transferring over all existing files and programs from a current HDD or SSD to a new Samsung drive. The process took us only about 20 seconds to set up. First, the SDM software scans the system for connected drives, and will show only the important partitions to the user. SDM then automatically adds the first partition, which generally contains a user's OS. Users can easily select other partitions by clicking on the graphics as necessary. SDM will also automatically adjust partition size, though users may adjust this according to their needs.

From there, SDM is ready to go. Once running, Samsung says it will take generally less than one hour to complete. In our case, SDM only took five minutes to complete as we cloned just under 40GB in a single partition – that yields a transfer rate of approximately 130MB/s. The process really was completely painless, and no doubt exists that a first-time upgrader could easily accomplish their task.

The previous version added custom cloning for customers with a larger capacity drive going to a smaller Samsung SSD. The software helped the user identify and exclude files that they didn't need. The latest version offers support for Windows 10, the option to exclude selected files from cloning, and improved cloning compatibility. In order for the new SDM to work the target drive must be one of the following:

Samsung Magician enables users to do simple tasks such as updating firmware, but it also provides more advanced features including the ability to set specific profiles according to which type of user you are. Users can select Maximum Performance, Maximum Capacity or Maximum Reliability. Samsung Magician went through a major update in 2013 giving the software a new GUI and some new features including RAPID mode, which utilizes up to 1GB of system DRAM as a cache for frequently-accessed data ("hot" data) to increase performance. The software has under gone nine other updates since the major 4.0 update, mostly smaller updates such as adding new supported drives. 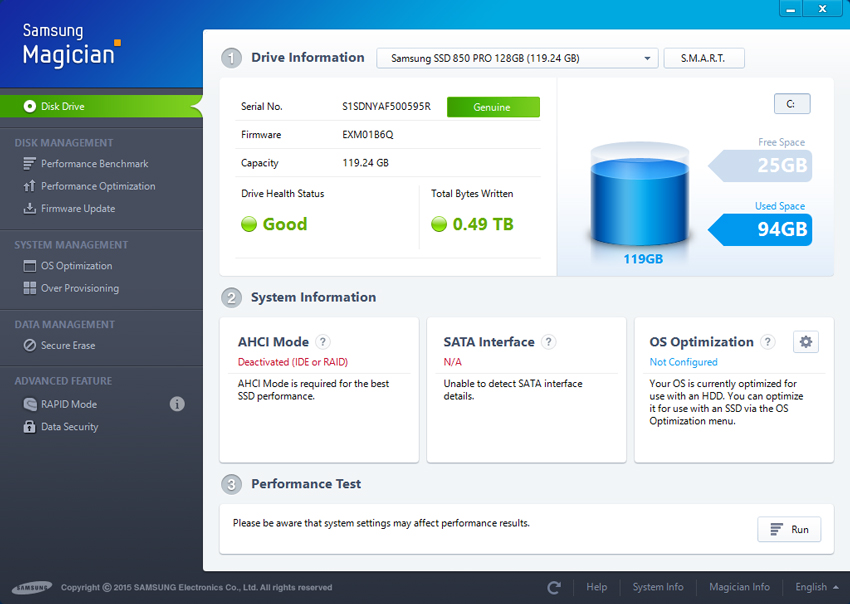 From the main screen users can also check the SMART data of their drive by clicking the tab marked “S.M.A.R.T.” in the upper right hand corner. 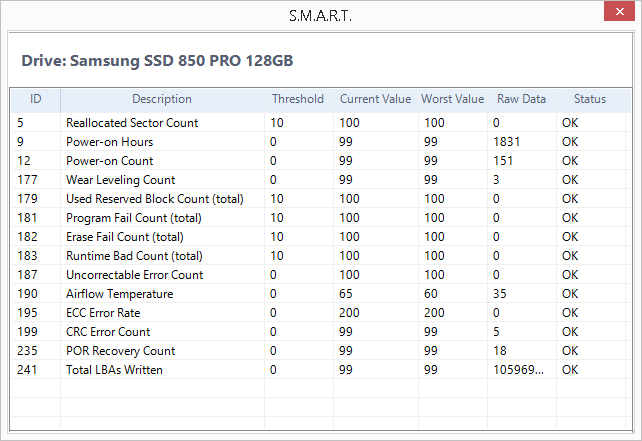 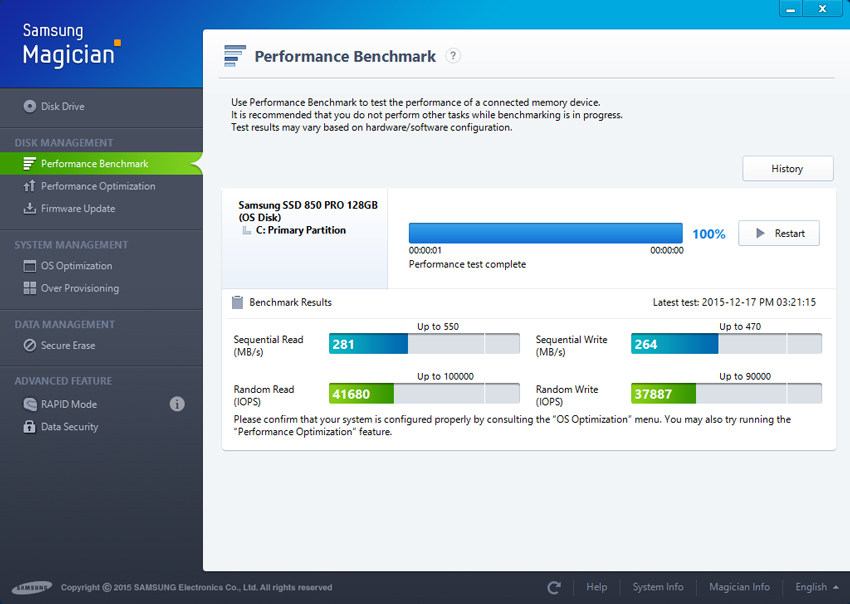 Along with testing performance, Magician enables users the ability to optimize the performance of the drive, assuming their system isn’t already using TRIM. If the computer has Windows 8 or up they won’t be able to optimize their performance through this tab. 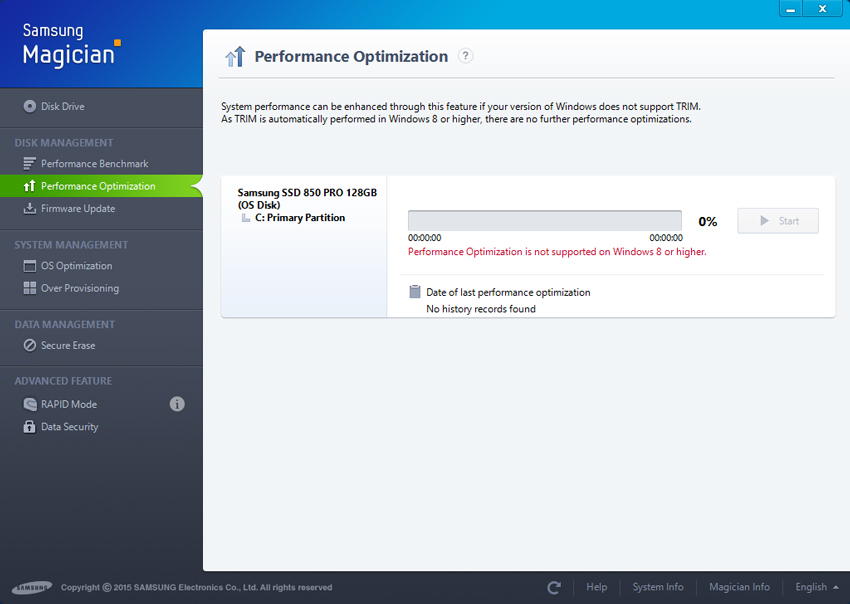 We actually cover firmware updates more in depth in our How to Upgrade Samsung SSD Firmware article. 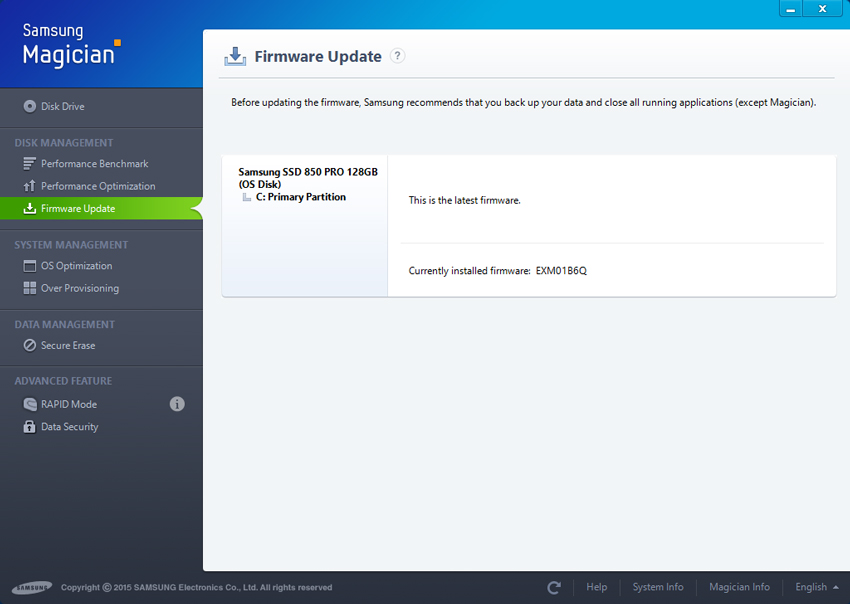 Magician gives users the ability to optimize their OS so that it will work better with Samsung SSDs. Users can apply aspects that maximize performance, capacity, or reliability or they can go through the advanced tab and manually adjust options. 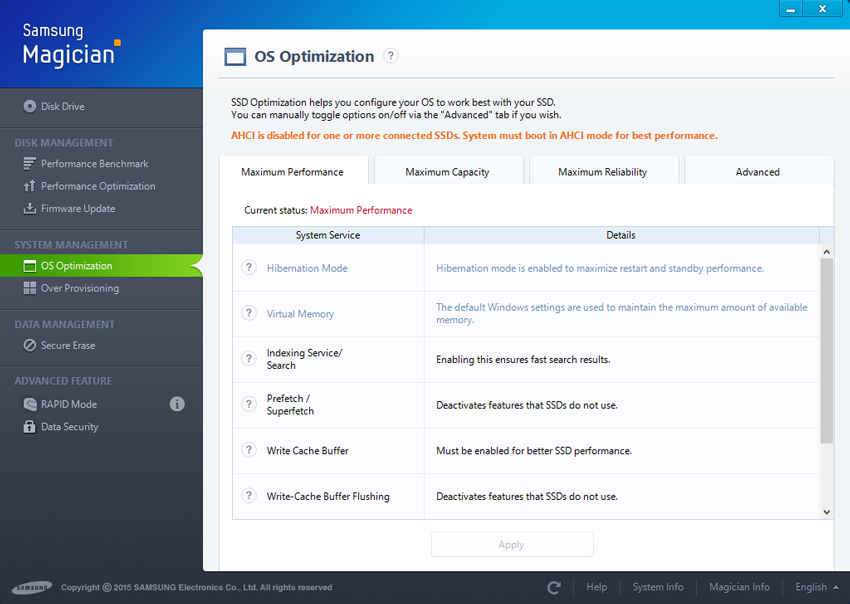 Another aspect of System management that will increase drive performance is Over Provisioning. Users can go with Samsung’s recommended allotment of over provisioning or set a custom amount. This will give a set free spot on the drive that helps the NAND cells wear evenly. 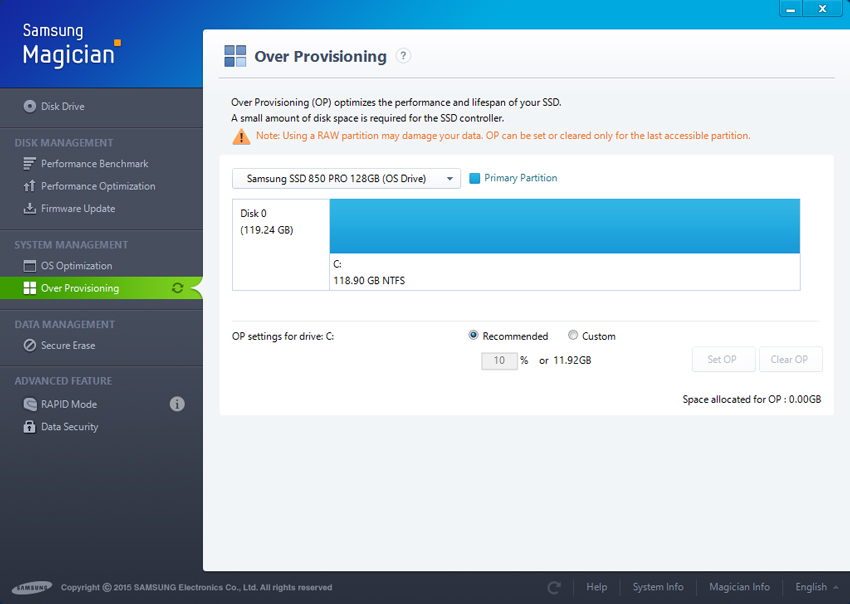 Magician also enables users to Secure Erase their drive (which wipes the SSD in under a minute) and to over-provision to a recommended or user-selected percentage. 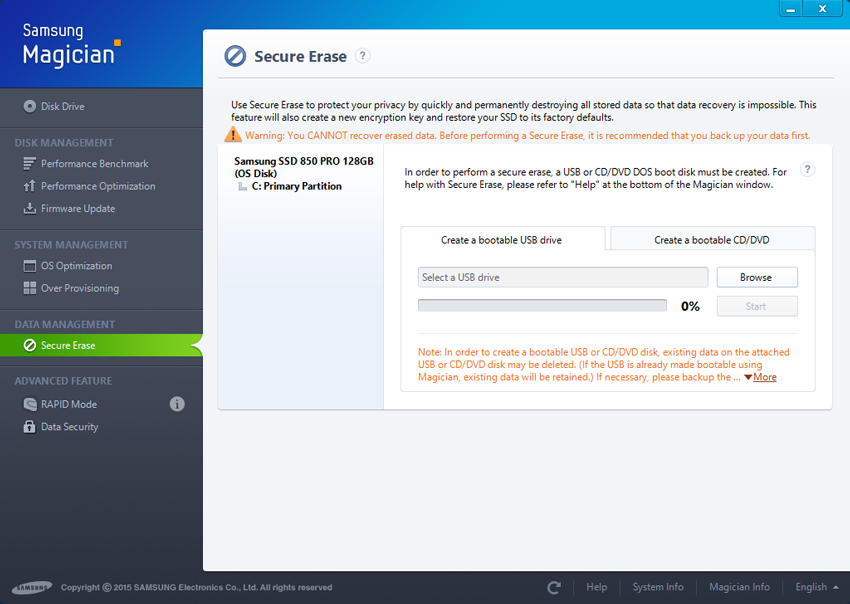 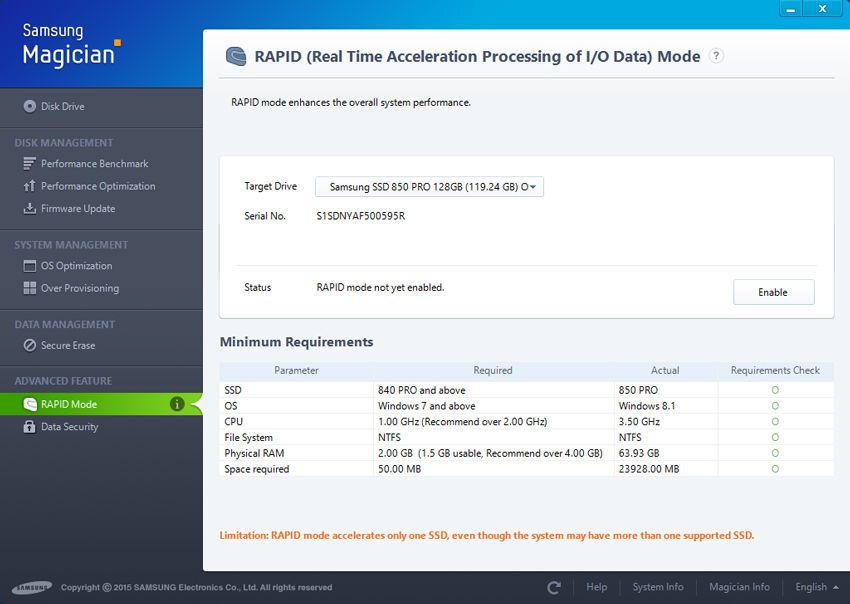 The Data Security tab shows which data security features are available for which drive and how to enable them. 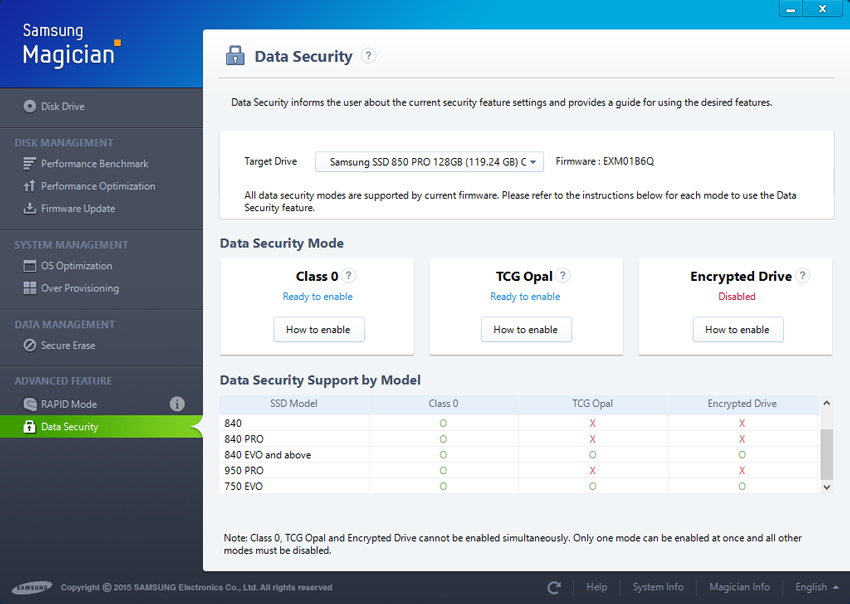 How to Upgrade Samsung SSD Firmware with Samsung Magician