The Acasis USB-C 10-in-1 hub with SSD enclosure (CM073) is an all-in-one solution built for professionals looking to increase connectivity, access to storage, and workflow. The Acasis hub offers a range of connectivity options for external devices along with the support of up to an 8TB SSD via a single M.2 bay. This hub can also support up to 10Gbps read and write, a [email protected] display, and deliver up to 80W of power output through a user-supplied power adapter.

The Acasis USB-C 10-in-1 hub with SSD enclosure (CM073) is an all-in-one solution built for professionals looking to increase connectivity, access to storage, and workflow. The Acasis hub offers a range of connectivity options for external devices along with the support of up to an 8TB SSD via a single M.2 bay. This hub can also support up to 10Gbps read and write, a [email protected] display, and deliver up to 80W of power output through a user-supplied power adapter. 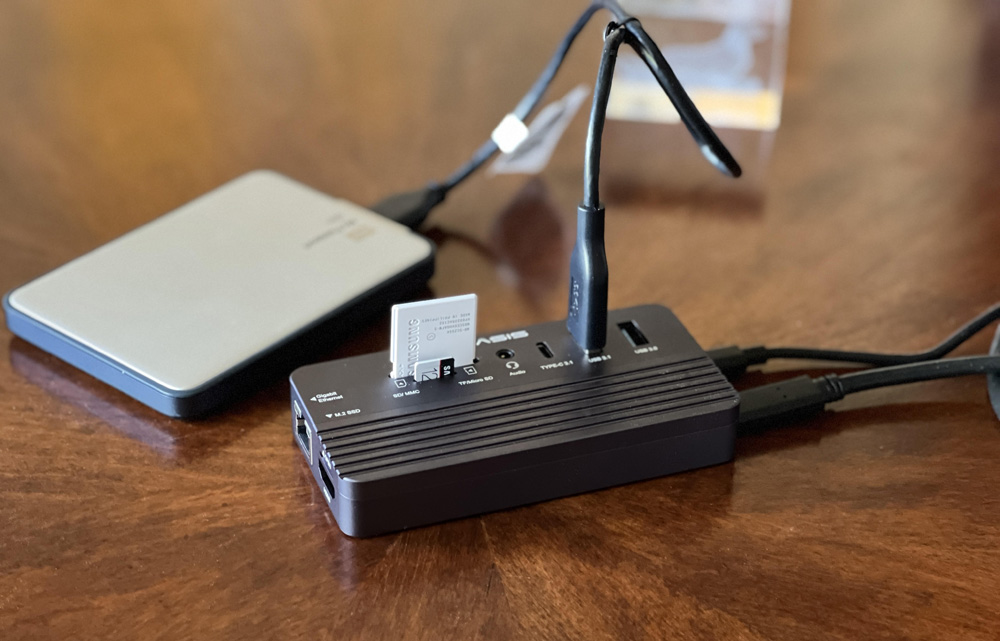 For those that aren’t entirely familiar with Acasis, they are a company that is known for producing a wide variety of end-user accessories, including capture cards, hubs, and cables. The USB-C hub that we are reviewing today was actually part of a 2021 Kickstarter and Indiegogo campaign started by Acasis to draw support for the product. The campaign had a total of 4641 backers. 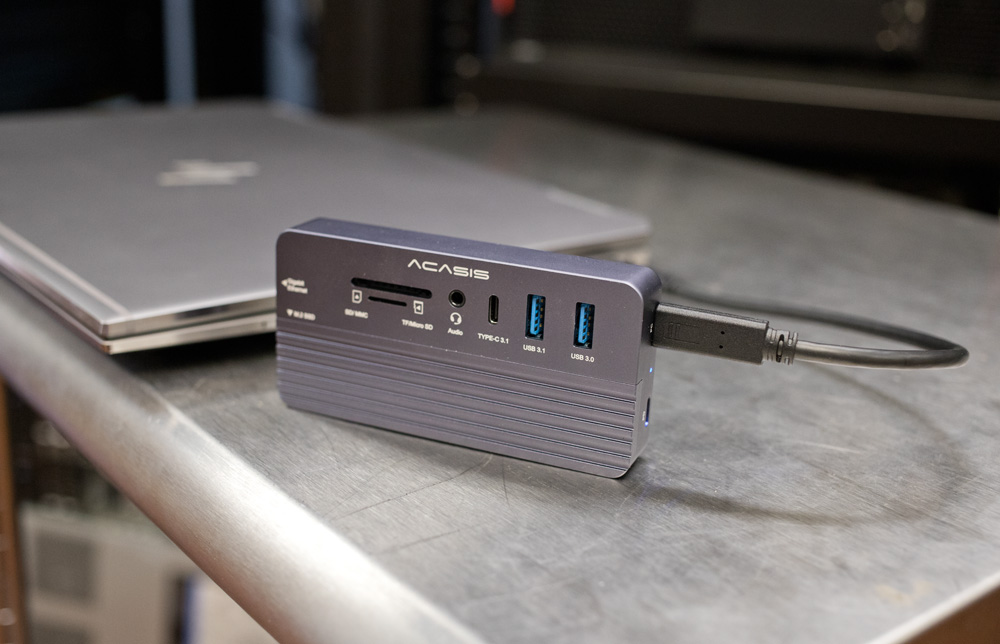 Since Acasis has engineered this 10-in-1 USB-C hub with versatility for any home office in mind, they have added support for NVMe (M Key) and SATA (B/B&M Key) along with support for 22*30/22*42/22*60/22*80mm. Because of this wide range of compatibility, users are able to put nearly any SSD that they might have into this hub. 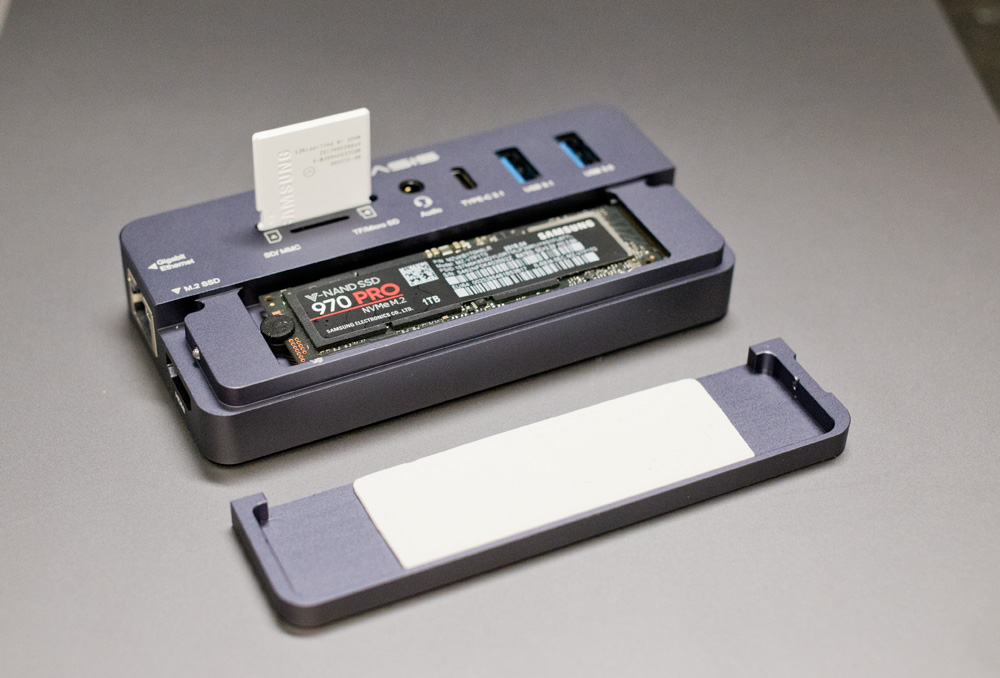 The hub supports Windows 10, Linux, and Mac OS 10.3 or higher. Since this hub supports Mac OS, it is great for Apple notebook users who are really limited by ports and/or storage. While not mentioned the hub is also supported by the Apple iPad Pro and Air that offer the USB-C connection. We tested it with an iPad Air 5th Gen, and saw support for all devices except the HDMI out. This was highly useful the SSD slot provided a ton of bulk storage and we could move media files around after a photoshoot with ease. With it being not much larger than most charging blocks, it was a nice surprise finding this supported. These parts all worked without supplying external power too, so you didn’t need to wire it up with an AC adapter.

The Acasis USB-C Hub with SSD Enclosure is quite a compact device, especially considering the extensive connectivity and M.2 NVMe slot. It measures in at 113mm x 56mm x 19mm (4.4in x 2.2in x 0.7in). The weight is reasonable at 145g (5.1oz), which isn’t especially heavy. This means the hub can go anywhere without users worrying about having to carry around a bulky, heavy device. 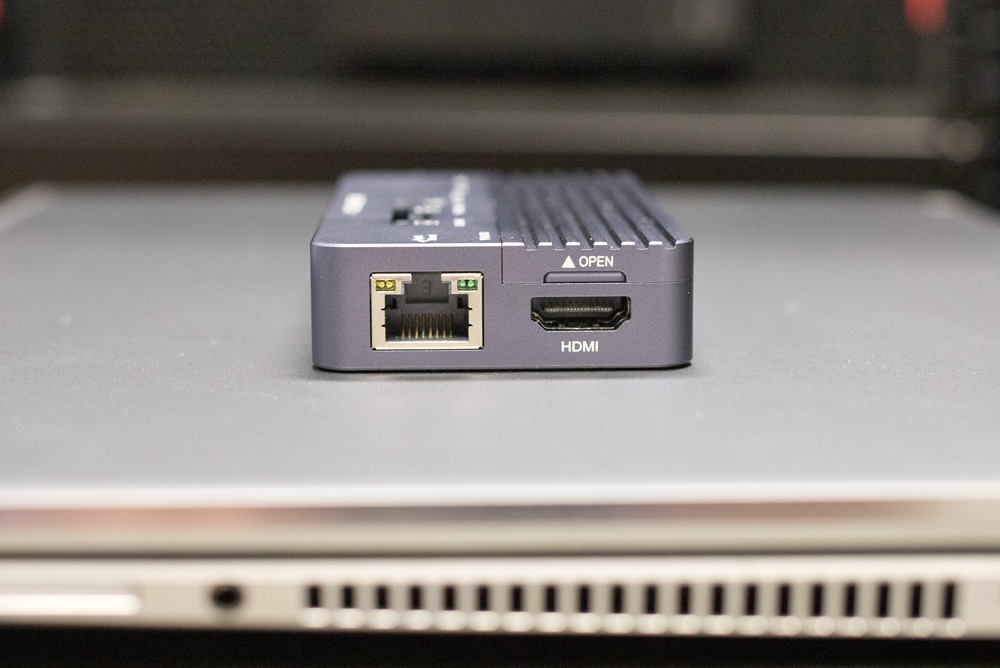 The outer shell of the Acasis hub is made of aluminum, similar to most other hubs. The aluminum acts as a heatsink as well,  it does tend to get warm with constant use. Acasis has also made the SSD enclosure snap shut, which is nice to see as some manufacturers make lids that screw shut. The lid being tool-free makes the product more versatile, since not everyone carries around a screwdriver. 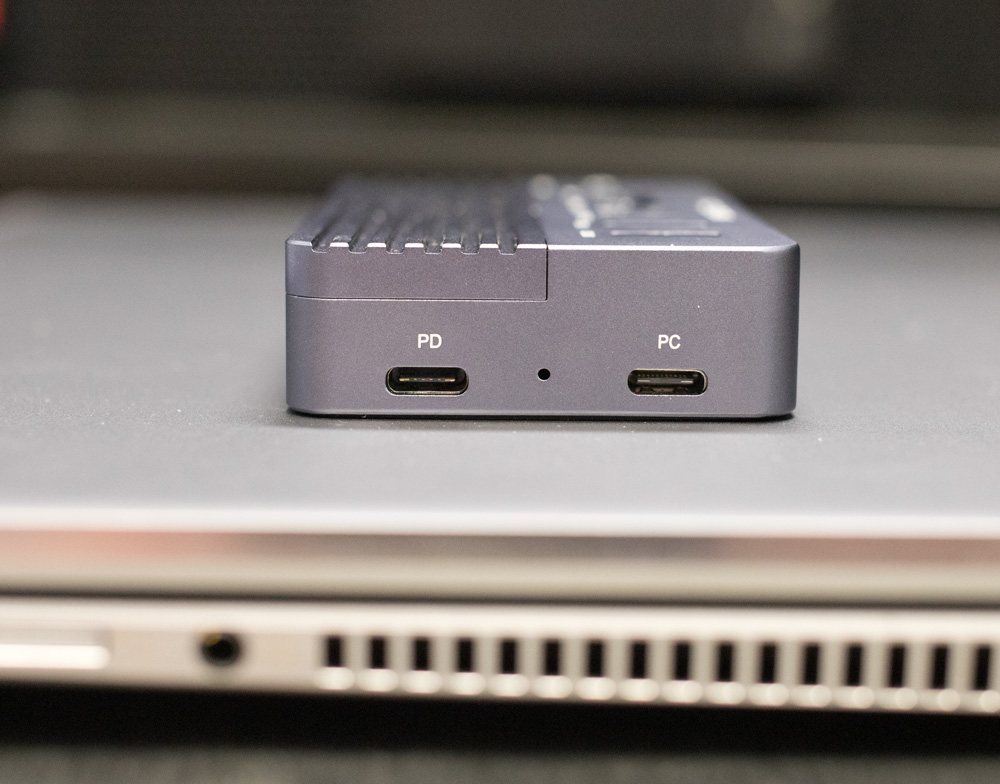 On the top of the Acasis hub is where nearly all the connectivity is located, including the SD/MMC reader,  MicroSD reader, audio jack, USB Type-C 3.1 port (10Gbps), USB Type-A 3.1 Gen2 port (10Gbps) and 3.0 port (5Gbps). Since these are the most used ports by consumers, having them right up front is great for people to quickly plug and play with this hub. The slot for the M.2 NVMe is also located on the top of the device secured by the snap lid.

Moving on to the side ports of the device, this is where users will find the more demanding ports. On the left side, there is the RJ45 Gigabit Ethernet port along with the HDMI [email protected] port. On the right side is where users will find where the main PC will be plugged into along with a power delivery 100W input port and an 80W output port.

Having these on the side allows users to make these the constant ports where these will most likely always be filled, and not have cables constantly going in and out. These ports also allow better cable management as these cables tend to be longer and more annoying to be in the way. Note that no power supply is included with the hub by default, meaning the power delivery rating may vary depending on what USB-C charger is used.

For our testing part of the review, we took the Acasis hub and benchmarked two different storage devices: the Samsung 970 Pro 1TB for the M.2 NVMe slot and the Lexar 1800x SD card.

Starting with the Blackmagic Design Disk Speed Test, the Samsung 970 Pro was able to attain 960MB/s write and 955MB/s read. This is obviously lower than when we tested it in our original review in a native NVMe slot, however, we are running it over a 10Gb USB-C cable to another device, essentially maxing out the interface. 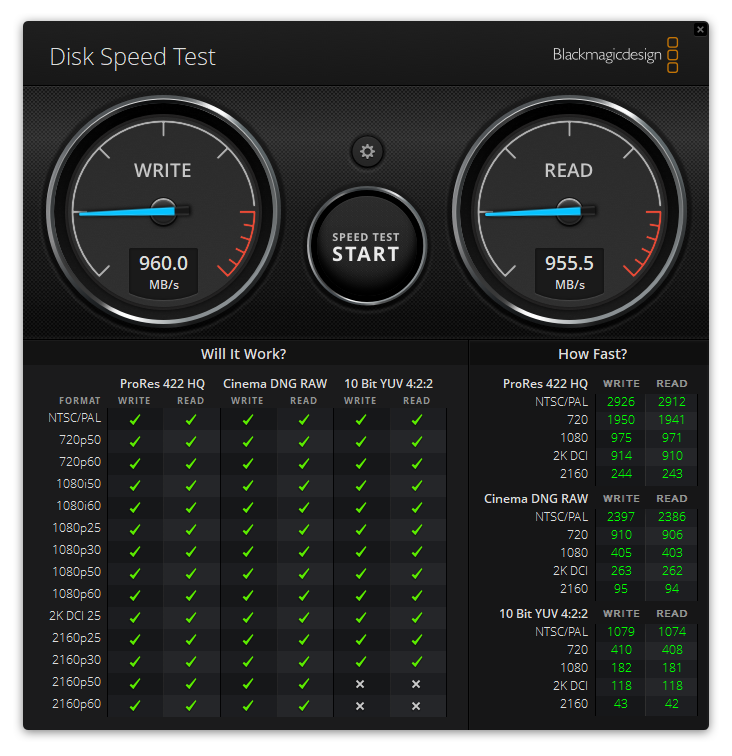 The next Blackmagic Design test is the one for the Lexar 1800x SD card. The Lexar 1800x was able to get 77MB/s write and 85MB/s read, also not doing as well as the original review, but this time we hoped for more. The reader doesn’t take full advantage of the pins on the Lexar, we should be much closer to 200MB/s reads. More mainstream SD cards will be okay though. 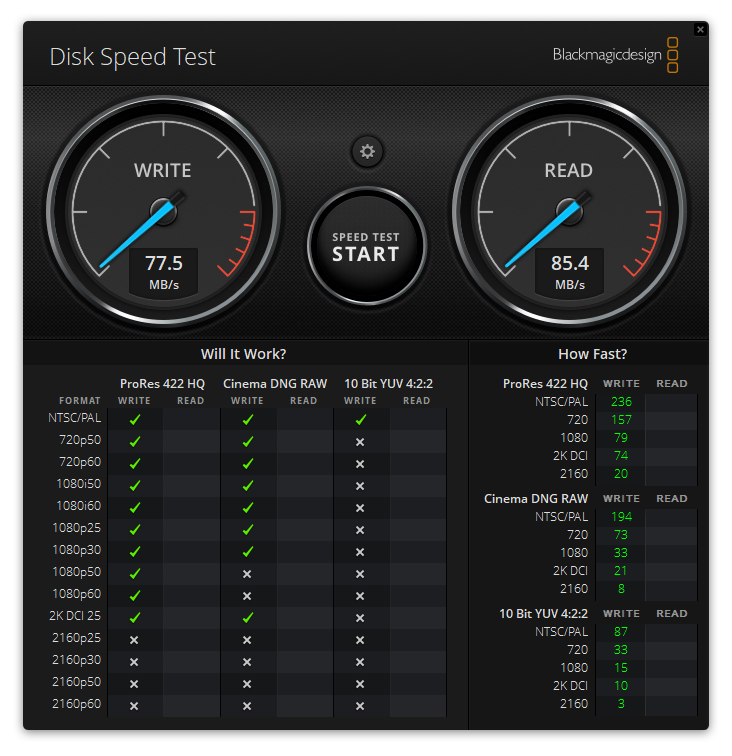 Overall, the Acasis is a solid hub with the ability to add in SSD storage, improving the versatility a good deal. It captures most of what a typical user may need, either in the office or on the go. Thankfully the dock is small enough to tote about and well-built enough to handle bumps and bruises from the road. 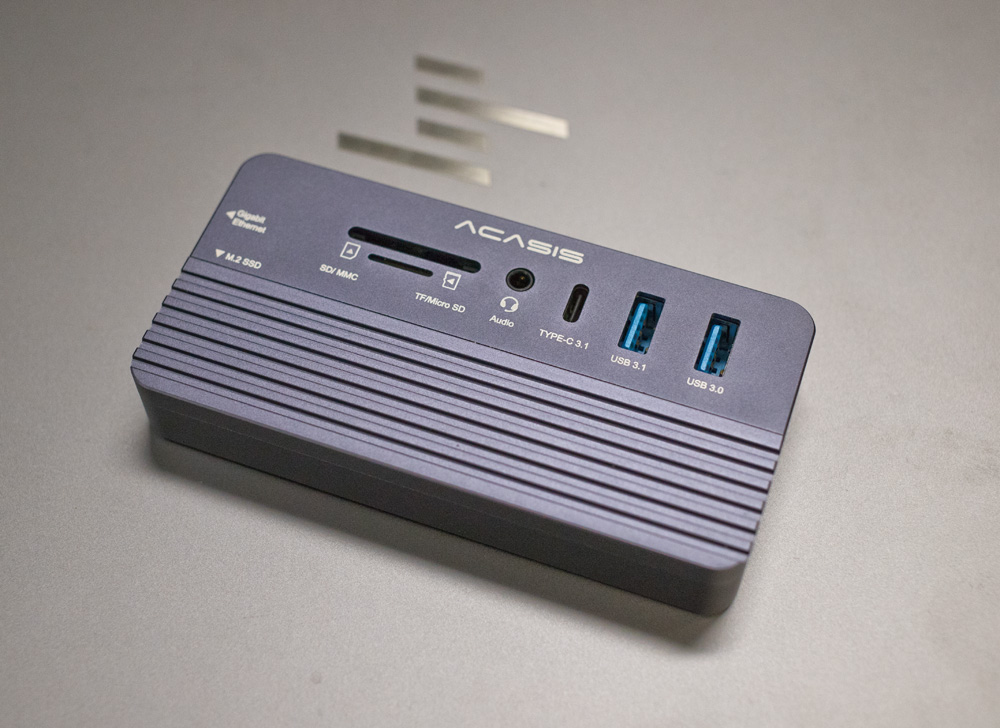 We were able to get solid performance from the Samsung 970 Pro 1TB and the Lexar 1800x SD, all things considered. The SSD is capped by the 10Gb USB-C interface, but we still saw the dock able to saturate that interface.  The SD card we used has an extra set of pins for full performance that this dock doesn’t support. The card still works, we just lose about half the read performance as a penalty. Mainstream cards worked out fine though and hit their expected numbers.

The Acasis USB-C Hub with SSD Enclosure is an ideal storage and connectivity assistant with a variety of expansion options for workstations either at the desk or on the road. A real treat was realizing it worked with our iPad Air 5th Gen as well, offering a ton of connection and storage options once connected. The only part that didn’t work on the iPad was the HDMI out.