The EBL Portable Power Station Voyager 1000 is a 1000W power station that has the ability to quick charge and is designed for those looking to power a variety of devices with the support of multiple charging modes. With its lightweight plastic design and bright orange color, the EBL Portable Power Station has the ability to be taken anywhere ranging from a mobile lab to a power center on the beach. 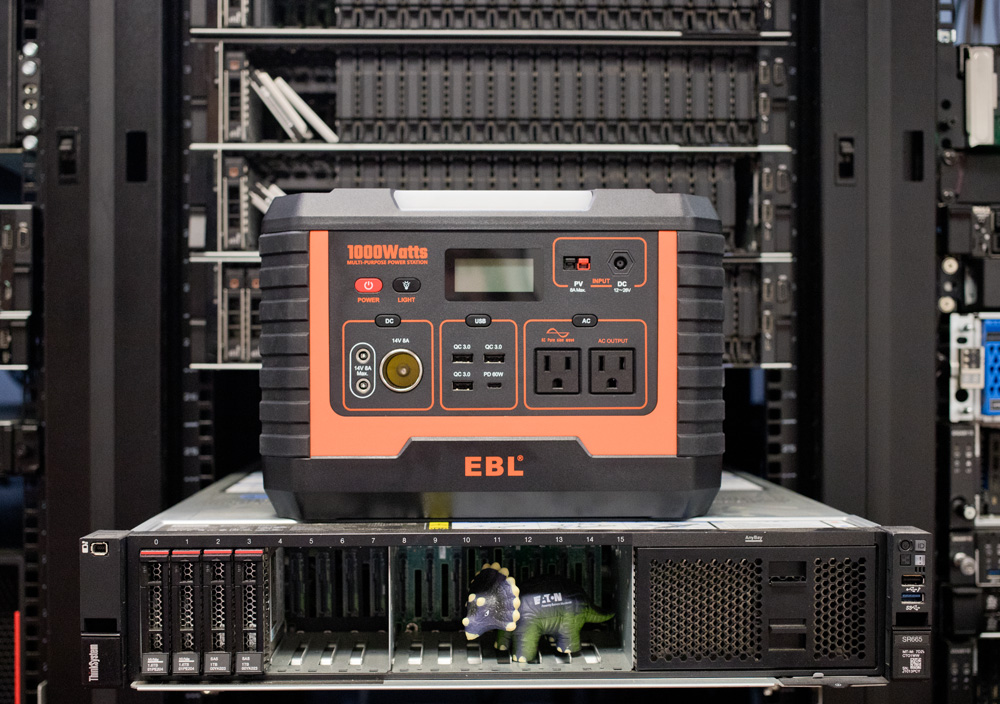 Since this is the first time we have taken a look at anything from EBL, for those that haven’t heard of this company or need a refresher, EBL is a brand known for batteries, chargers, flashlights, etc. Some of the more popular products that they sell are individual batteries, but they are moving up into the ever-growing portable power station market.

The EBL Portable Power station features a wide range of connectivity making it quite versatile. The 1000W power station comes with two 100V AC outlets, one USB-C PD Quick 60W port, and three Quick charge USB Type-A 3.0 ports, allowing for connectivity of all modern devices, powering them at the same time. All the main groups offer individual control, so you can limit which items are active at a given time. This is handy to limit parasitic power draw when power isn’t needed. 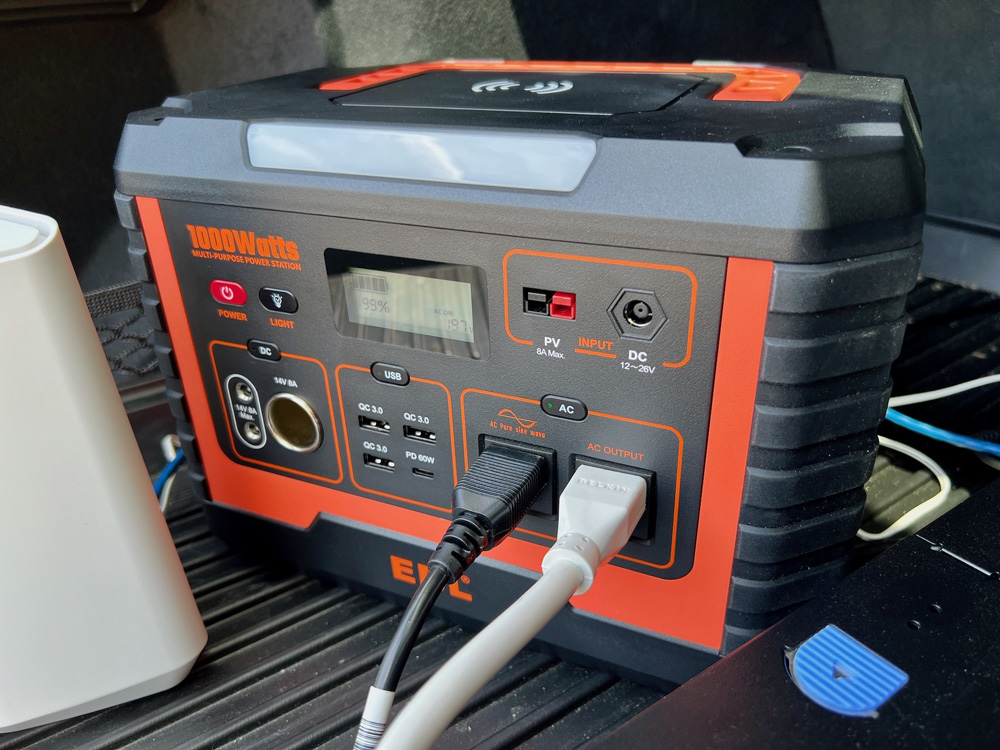 The 1000Watts power station also comes with a mini-LED screen to show the power left on the unit, input, and the AC/DC numbers. The real-time feedback is great for looking at how different devices are affecting the load on the power station and adjacent to that are the incoming and ongoing power indicators that let users track the usable charging available. 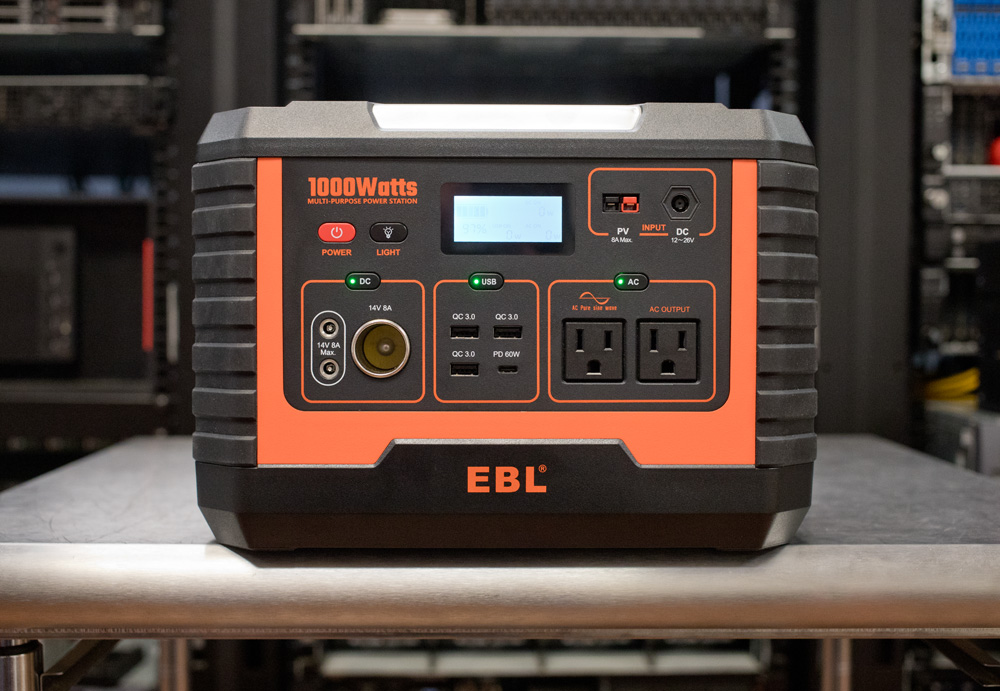 The EBL Power Station has an all-plastic design to cut down on the weight and cost of manufacturing. The orange color helps with visibility, making it easy to spot. From a design standpoint, the case also has large rubber feet which help soften the blow when placing it down on hard surfaces. The rubber on the corners and sides does improve the ability to take hits in environments that might be tough, and limit vibration and impact to the battery cells. The bottom also includes the spec sheet for the Power Station, offering quick highlights if the question pops up surrounding what its capabilities are in the field. At a quick glance you can see what the limits of all of its inputs or outputs are. 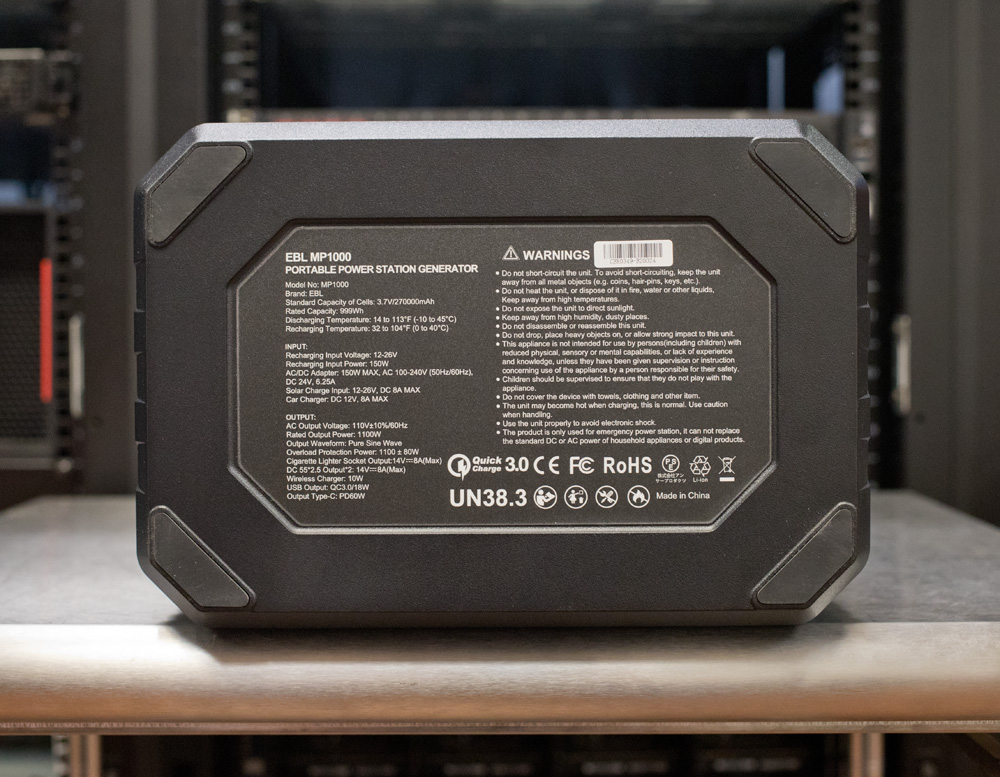 All connectivity mentioned is on the front of the device along with the buttons for power and the light. Since everything is found on one side of the device, it allows for the other sides to be used as ventilation to help with heat dissipation. The only part of the connectivity that isn’t found on the front is the wireless charging pad that is built into the device for the newer smartphones and devices.

The mini-flood light is a-fixed to the top bar of the device, providing some illumination on-site, although the direction it is facing is less than optimal. While it provided a lot of light, you end up needing to look directly at it to turn the light on or off. 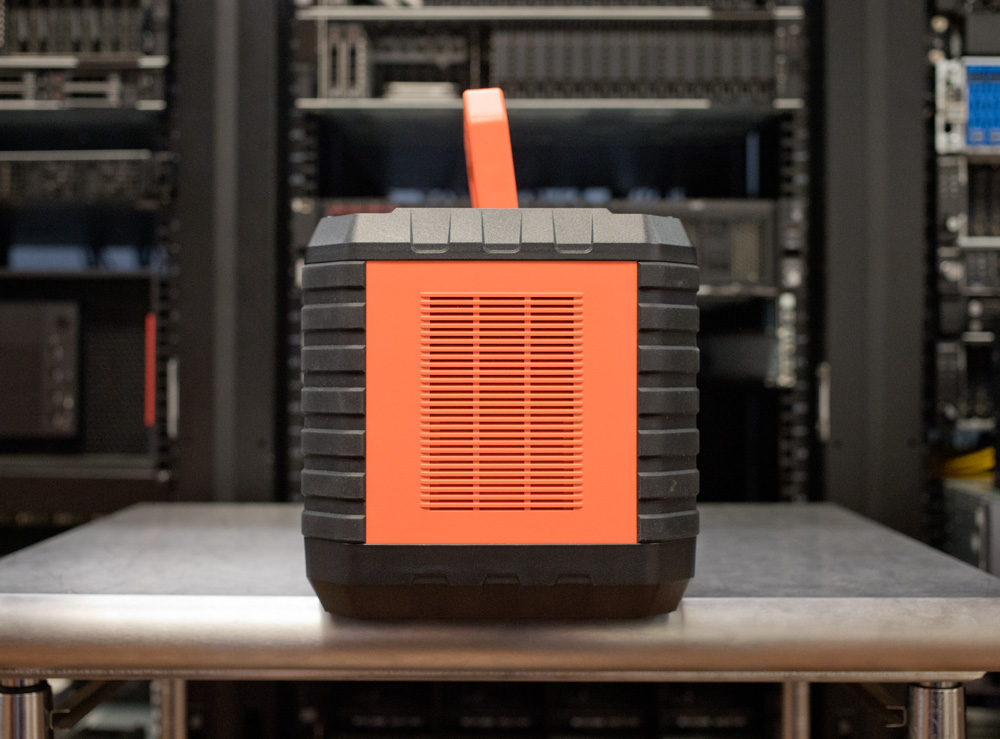 An aspect that is shared between various portable power stations is the ability to accept solar panels as a way to charge the power station. This EBL Power Station isn’t any different, one of the prominent aspects that EBL markets for this power station is that it works well with EBL Solar Apollo 100W solar panels. Supporting this is the one solar panel parallel adapter cable that comes included. For charging with line current, the system includes a

The EBL Portable Power Station is currently available from Amazon for $629.99 after the coupon.

The notion of “user results may vary” can’t be more true than for users of portable power systems. There is a large degree of variance that comes with what size loads you are running and how long those loads operate. Within a range of error though, if you know what your expected power consumption is, it’s not that difficult to narrow in on what your expected runtime may be.

To gauge the effective capacity of the EBL Portable Power Station 1000W, we used a Kill-A-Watt measuring the power needed to fully charge the battery from dead, and then the same Kill-A-Watt on the AC out which was driving a 500W load to measure how much power the Power Station was able to deliver.

We used a high-speed fan as our load device, which offered a consistently high power draw. EBL rates the Power Station 1000W as having a 999Wh battery, and we were able to measure a full charge as consuming 1070Wh. Accounting for some loss in the AC adapter through heat, this gets us pretty close to the rated capacity.

We then ran the full power-draw test and were able to measure the total output of 800Wh. Again this gets pretty close to the rated capacity and just a hair under their rated figure. EBL states to use an 85% efficiency figure when calculating expected runtimes, which in this case would put the unit at 849Wh versus the 800Wh we measured. Depending on the load size this figure could change. 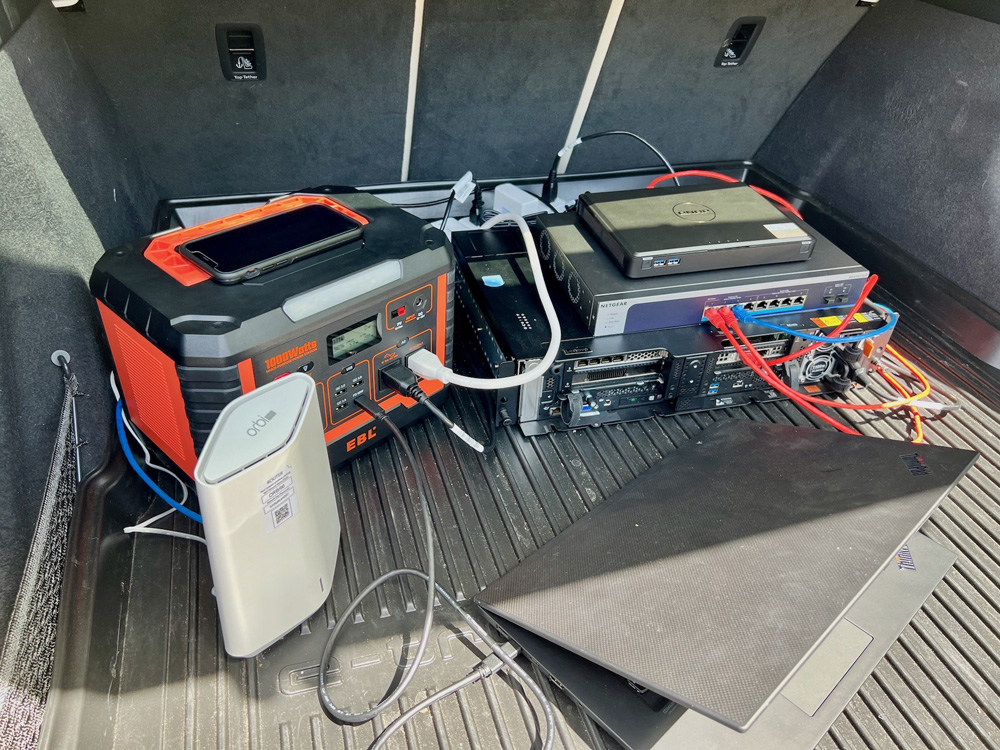 For a little bit of field tech testing, we slammed the EBL Portable Power Station Voyager 1000 in the back of a car, powering a ton of IT gear. The list included a Lenovo SE450 server, Netgear 10GbE switch, Netgear Orbi wireless access point, Lenovo ThinkPad, QNAP all-flash NAS, and for good measure, we tossed an iPhone on the wireless charger.

Under load, we might only make it a couple of hours or so, but there are many data gathering tasks at the remote edge where this would be sufficient. We could of course rightsize our portable infrastructure to better match the battery. For standing up equipment in the field though, having a 1000W inverter matched up with a 999Wh battery, you have a ton of power on tap for different situations.

We had a good deal of fun with the EBL Portable Power Station Voyager 1000, perhaps pushing it a little outside of its comfort zone. In all fairness to us though, we’re seeing more and more use cases where field techs and others need high-quality power, far from the nearest outlet. And if our own digital imaging technician Vince is to be believed, there are many times where sound pollution is an issue, so firing up a generator is a no-fly zone. There are also situations where power is needed before on-site power is available where Portable Power Stations give you that hour or two of runtime before switching over to a more permanent source.

We’d like to make a few design edits. The light bar can be blinding given its placement and the display could use a runtime countdown clock. But otherwise, it’s well-built, offers extensive runtime thanks to the large battery, and appears to deliver consistent high-quality power in our ad hoc testing.