The Asustor AS7110T is a SMB virtualization and storage NAS solution highlighted by its Intel Xeon 9th generation Quad-Core CPU. With its 10 drive-bays and highly customizable build, the AS7110T offers a range of different options for budgets of all kinds. As such, it can easily scale as your business grows for a total of 160TB in raw capacity (using 10 x 16TB HDDs), which can be upped to 352TB when using expansion units. Moreover, its online capacity expansion feature allows users to replace hard drives inside the NAS without downtime. The AS7110T also fully supports iSCSI/IP-SAN, NFS, virtualization and Docker apps, and is VMware, Citrix and Hyper-V ready.

The Asustor AS7110T is a SMB virtualization and storage NAS solution highlighted by its Intel Xeon 9th generation Quad-Core CPU. With its 10 drive-bays and highly customizable build, the AS7110T offers a range of different options for budgets of all kinds. As such, it can easily scale as your business grows for a total of 160TB in raw capacity (using 10 x 16TB HDDs), which can be upped to 352TB when using expansion units. Moreover, its online capacity expansion feature allows users to replace hard drives inside the NAS without downtime. The AS7110T also fully supports iSCSI/IP-SAN, NFS, virtualization and Docker apps, and is VMware, Citrix and Hyper-V ready. 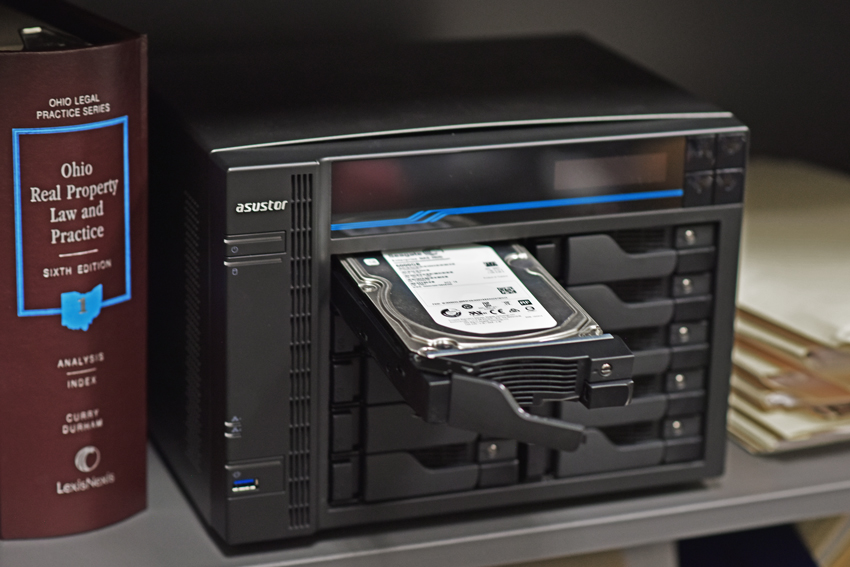 Under the hood, the Asustor AS7110T is powered by an Intel Xeon E-2224, a mid-range Quad Core 3.4GHz up to 4.6GHz CPU (via Intel Turbo Boost Technology) released in 2019 that features an x64 64-bit architecture, 8M cache. We recently saw this Intel CPU inside the Lenovo ThinkStation P330. The AS7110T also comes standard with 8GB of server-grade DDR4-2666 ECC memory (which can be increased up to 64GB via two 32GB sticks).The ECC memory can detect then correct the most common types of data corruption on the fly, which makes it ideal for NAS devices like these, as it helps promote system stability and prevent data loss due to unexpected power losses or surges. In addition, the AS7110T can be configured with two M.2 NVMe SSD ports for fast caching and features two USB 3.2 Gen 2 ports at the rear.

Backed by a nice 5-year warranty, the Asustor AS7110T starts around the $1,000 mark for the diskless model. Our configuration includes the standard 8GB of DDR4 RAM and eight 14TB WD Red HDDs.

Weighing in at over 15 pounds (diskless) and measuring 8.5 inches high and 11.5 inches in width, the AS7110T is a sizable NAS device. The AS7110T also features a nice, all-black front panel design. 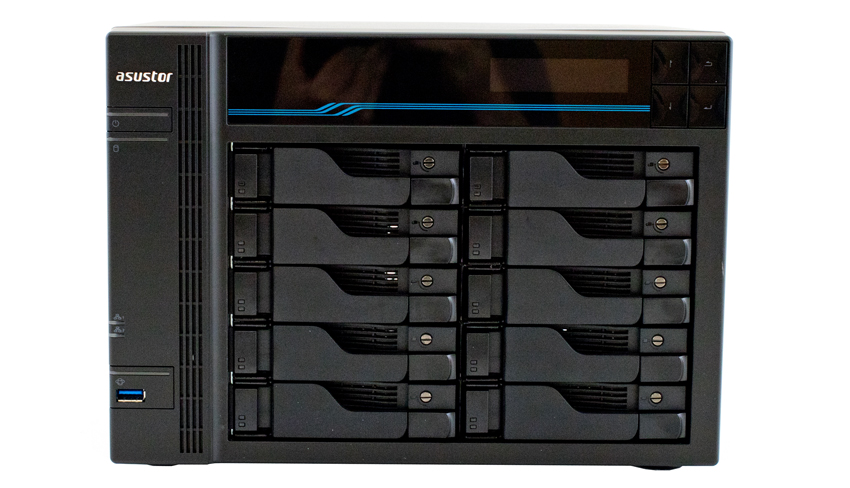 As for configurations, users can populate the AS7110T with 10 x SATA3 6Gb/s 3.5″ HDDs or 2.5″ SSDs. To install a drive, all we had to do is press the button on the lower part of the disk tray to release the latch, and then pull it out. This isn’t a tool-less NAS, so you will have the secure the drives with four screws.

The LCD display at the top right is very nice. The NAS name and IP address will display on the LCD panel after powering on the device and is used to configure NAS settings and check system information. To navigate the menus, the buttons are handily to right side of the LCD panel: Up, down, back and confirm buttons. Overall, navigating through the interface via these buttons is snappy.

Along the left side are the Power, system status, and network LED indicators with a USB 3.0 port below them. Each installed hard disk has a LED indicator as well, which lights green when ready (or flashing when data access is in progress). 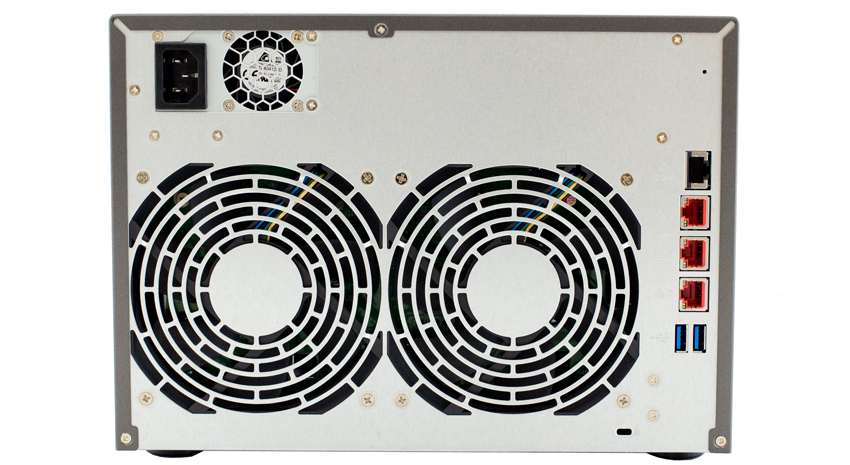 Turning the AS7110T reveals most of the connectivity, which surrounds the dual system fans:

In the first of our enterprise workloads, we measured a long sample of random 4K performance with 100% write and 100% read activity. Looking at IOPS, the best configuration for the Asustor AS7110T was under iSCSI connectivity, which recorded 2,300 IOPS write and 632 IOPS read. CIFS showed 2,229 IOPS write and 180 IOPS read.

When looking at the standard deviation of random 4K performance, the AS7110T recorded its best read and write performance in CIFS with 100ms and 145.4ms, respectively. Using iSCSI connectivity, it posted 280.6ms read and 188.4ms write.

Compared to the fixed 16 thread, 16 queue max workload we performed in the 100% 4K write test, our mixed workload profiles scale the performance across a wide range of thread/queue combinations. In these tests, we span workload intensity from 2 threads and 2 queue up to 16 threads and 16 queue. In throughput, iSCSI showed a range of 473 IOPS to 666 IOPS while CIFS recorded 233 IOPS and slowing down slight by the end with 230 IOPS. 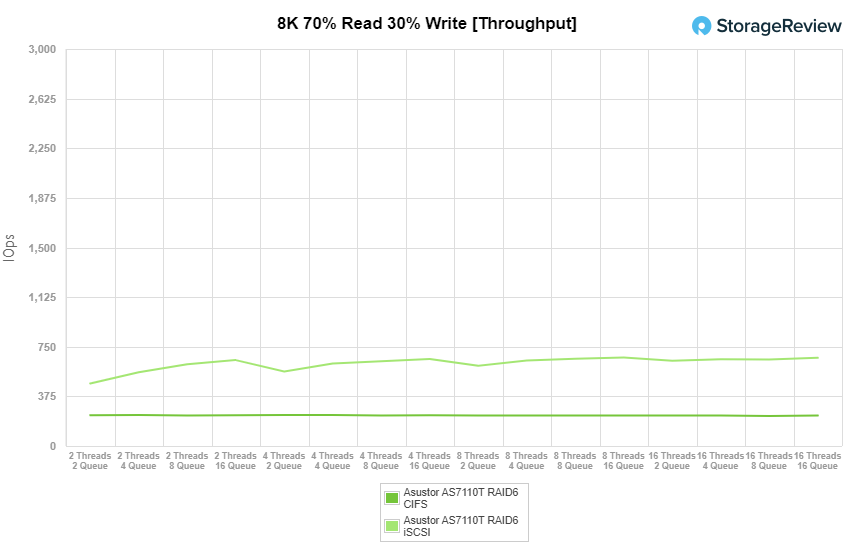 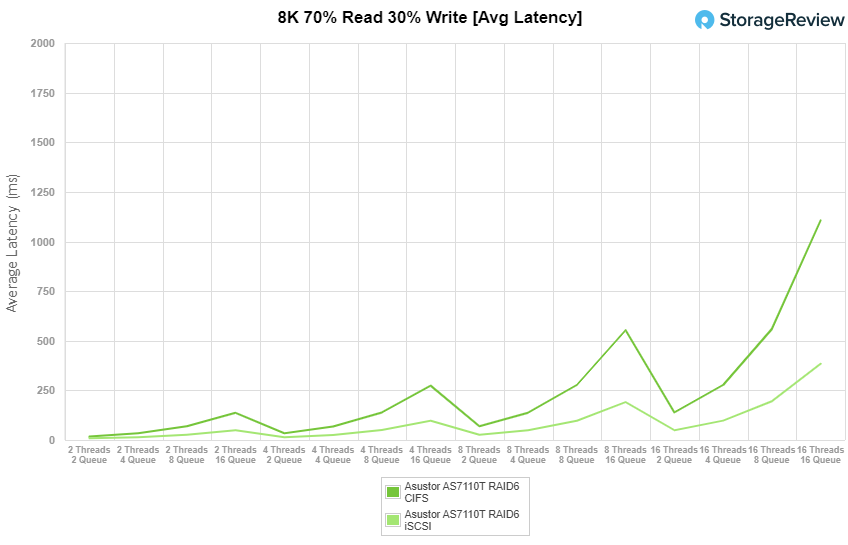 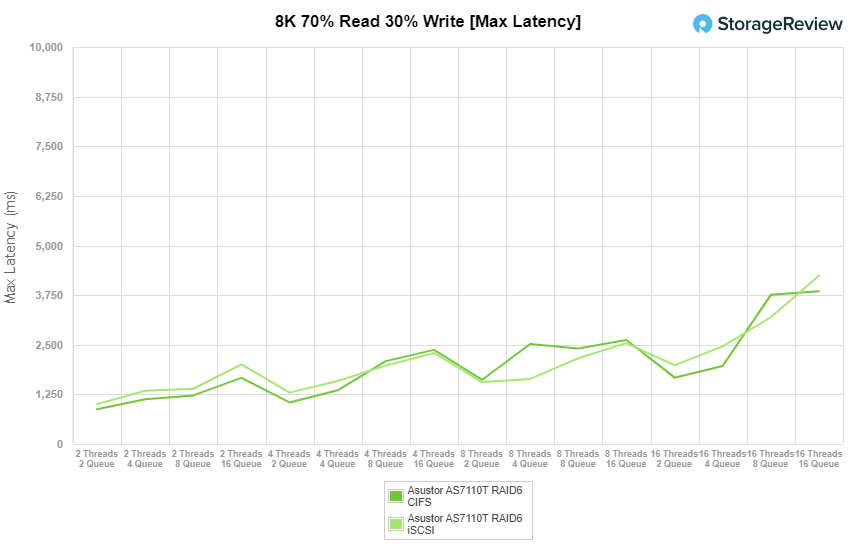 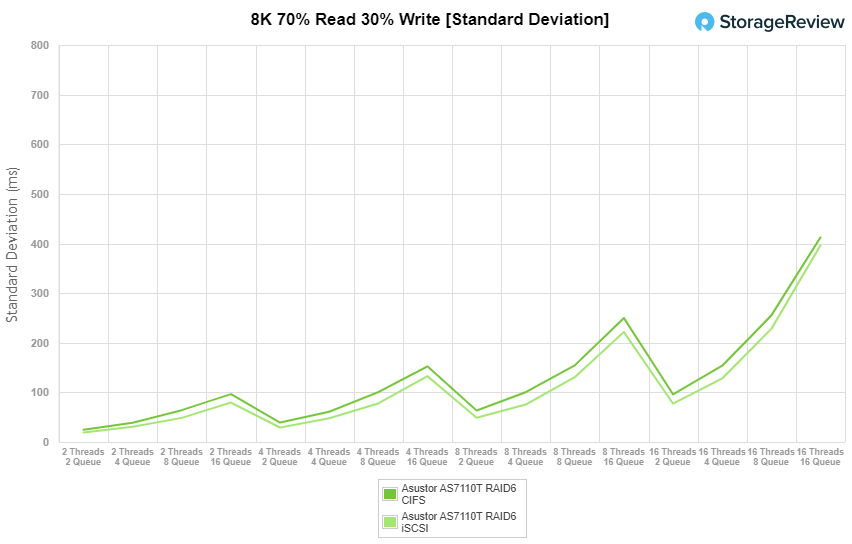 Our last test in our small NAS Synthetic Workload testing is the 128K test, which is a large block sequential test that shows the highest sequential transfer speed. When looking at the 128K performance of 100% write and 100% read activity, the best configuration for the AS7110T was under CIFS connectivity, which recorded 1.16GB/s read and 1.13GB/s write. iSCSI showed 231MB/s read and 1.12GB/s write.

Overall, the AS7110T a nice release from Asustor. The 10-bay NAS is highlighted by an Intel Xeon 9th generation Quad-Core CPU, up to 64GB of server-grade DDR4-2666 ECC memory, two M.2 NVMe SSD ports for caching, one 10-Gigabit Ethernet port, three 2.5-Gigabit ports and a USB 3.2 Gen2 connectivity. The AS7110T can be customized to fit a range of budgets, and can easily scale as a business grows or needs more storage; up to 160TB or 352TB via expansion units. Its online capacity expansion feature also means drive replacement won’t cause any downtime. In addition, the new Asustor NAS fully supports iSCSI/IP-SAN, NFS, virtualization and Docker apps, and is VMware, Citrix and Hyper-V ready.

It houses ten 3.5-inch drive bays that also supports 2.5-inch SSDs, allowing users to build a hybrid storage solution. They can also leverage both capacity and performance via the SSD caching slots.

If you’re looking up storage for your #PCbuild,

In our latest review, we take a look at @synology.

We have some really awesome stuff in the lab with

Does #WorkFromHome life have anybody else thinking

Overall, the @intel SSD 670p performs well for a Q