The Lenovo ThinkStation P330 is an entry-level tower workstation that can be configured to a fit a range of budgets, from builds under $1,500 to ones that can reach over $6,000. Though the P330 falls somewhere on the lower-end of the performance spectrum of workstations, it is highly customizable (which is par for the course with ThinkStation rigs), featuring the some of the latest-gen Intel Core vPro or Xeon CPUs, optional Optane memory and on-board M.2 storage support. Moreover, the Lenovo workstation is bundled with some pretty good security features, which includes Trusted Platform Module (TPM) data encryption and a lockable side panel.

The Lenovo ThinkStation P330 is an entry-level tower workstation that can be configured to a fit a range of budgets, from builds under $1,500 to ones that can reach over $6,000. Though the P330 falls somewhere on the lower-end of the performance spectrum of workstations, it is highly customizable (which is par for the course with ThinkStation rigs), featuring the some of the latest-gen Intel Core vPro or Xeon CPUs, optional Optane memory and on-board M.2 storage support. Moreover, the Lenovo workstation is bundled with some pretty good security features, which includes Trusted Platform Module (TPM) data encryption and a lockable side panel. 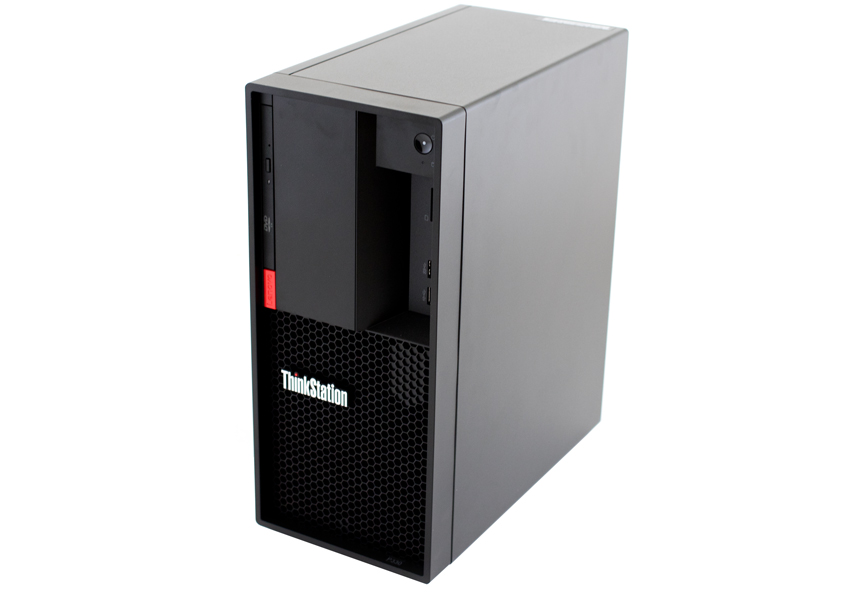 As for configuring the Lenovo ThinkStation P330, users can choose from a dozen different processor options including an Intel Core i5-9400 (2.90GHz, up to 4.10GHz with Turbo Boost, 6 Cores) or an Intel Xeon E-2244G (3.80GHz, up to 4.80GHz with Turbo Boost, 4 Cores) to the powerful Intel Core i9-9900 vPro (3.10GHz, up to 5.0GHz with Turbo Boost, 8 Cores). Users can also add up to Up to 64GB 2666MHz DDR4 RAM via its four UDIMM slots as well as a range professional graphics cards, including the entry-level NVIDIA Quadro P620 2GB to the higher-end NVIDIA Quadro P5000 16GB. Users also can simply use the integrated graphics card if they do not need GPU power. If users decide populate the Lenovo ThinkStation P330 with the P5000, they will have a “certified” low-cost virtual reality rig ready to go.

Weighing in at just under 24lbs (though it will get heavier has you add more components) and almost 15 inches tall, the Lenovo ThinkStation P330 is a small machine packing a big punch.

The front of the P330 consists of two parts: the hexagonal-shaped ventilation at the bottom and the connectivity at the top. The former covers the lower half of the panel, helping to keep the system cooling and running smoothly. It also displays the ThinkStation logo at the top left.

All the connectivity is located at the top, residing in a recessed panel roughly a few inches deep just above the power button. Here, the panel includes a microphone jack/combo audio jack, an optional 7-in-1 card reader, a USB-C port, two USB 3.1 Gen 1 ports, and two USB 3.1 Gen 2 ports. To the left of the panel is the optional slim DVD ROM. 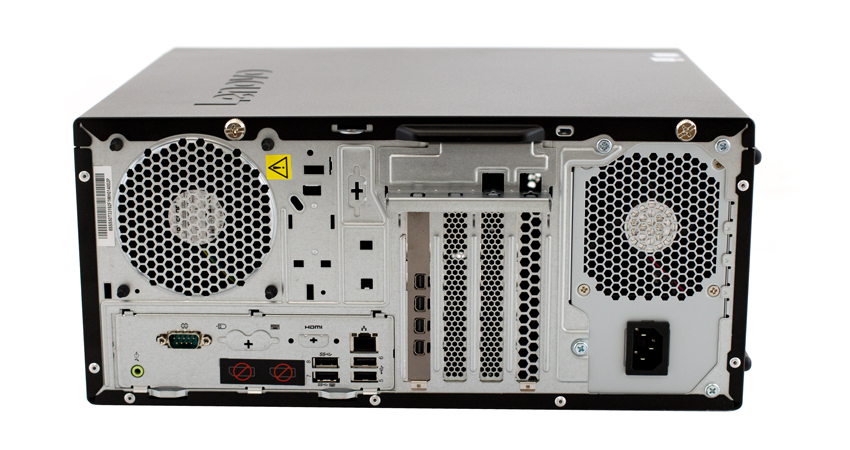 Turning the P330 to the rear reveals the rest of the connectivity, including:

We outfitted our Lenovo ThinkStation P330 review model with an NVIDIA Quadro P620 GPU. This lower/mid-range professional graphics card features a 512 CUDA core Pascal GPU, 2GB of GPU memory and a single-slot, low-profile form factor, the latter which makes it compatible with a range of workstations that have limited internal space to work with. It also supports for up to four 4K displays (4096×2160 @ 60 Hz) with HDR color, making it a decent option for creative professionals on a budget. 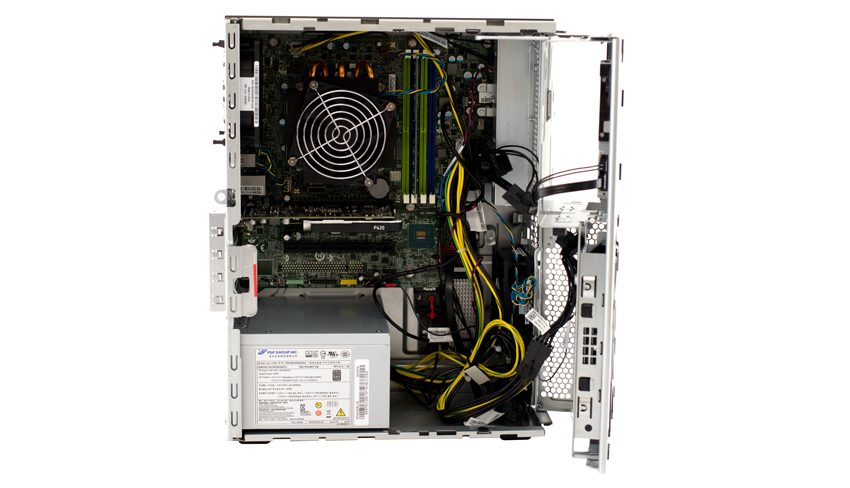 The side panel features a metal loop that can be secured with a padlock or anything similar. This is pretty useful for those needing to protect the interior of the workstation from tampering or theft.

To gauge the performance of the Lenovo ThinkStation P330 with our mid-range build, we put it through three resource-intensive tests. This will also give us a good indication of the capabilities of the NVIDIA Quadro P620. We also compared the P330 to the Lenovo ThinkStation P520, which features an Intel Xeon W-2145, NVIDIA Quadro P4000 8GB, 16GB RDIMM DDR4-2666 ECC RAM, and a 512GB M.2 PCIe NVMe Opal SSD.  Though this is certainly a much higher classed workstation, we wanted to demonstrate the differences between an entry-level tower and a performance-driven one.

As expected, the P330 was greatly out-performed by the P520 put up entry-level numbers with our configuration.

Moving on to the PCMark10 benchmark, which is a system benchmark for Windows PCs with a focus on modern office tasks, we look at range of workloads categorized into three groups. The Essentials group includes web browsing, video conferencing, and app start-up time. The Productivity group includes tests based on spreadsheets and writing. The Digital Content Creation group includes photo editing, video editing, and a rendering and visualization test. 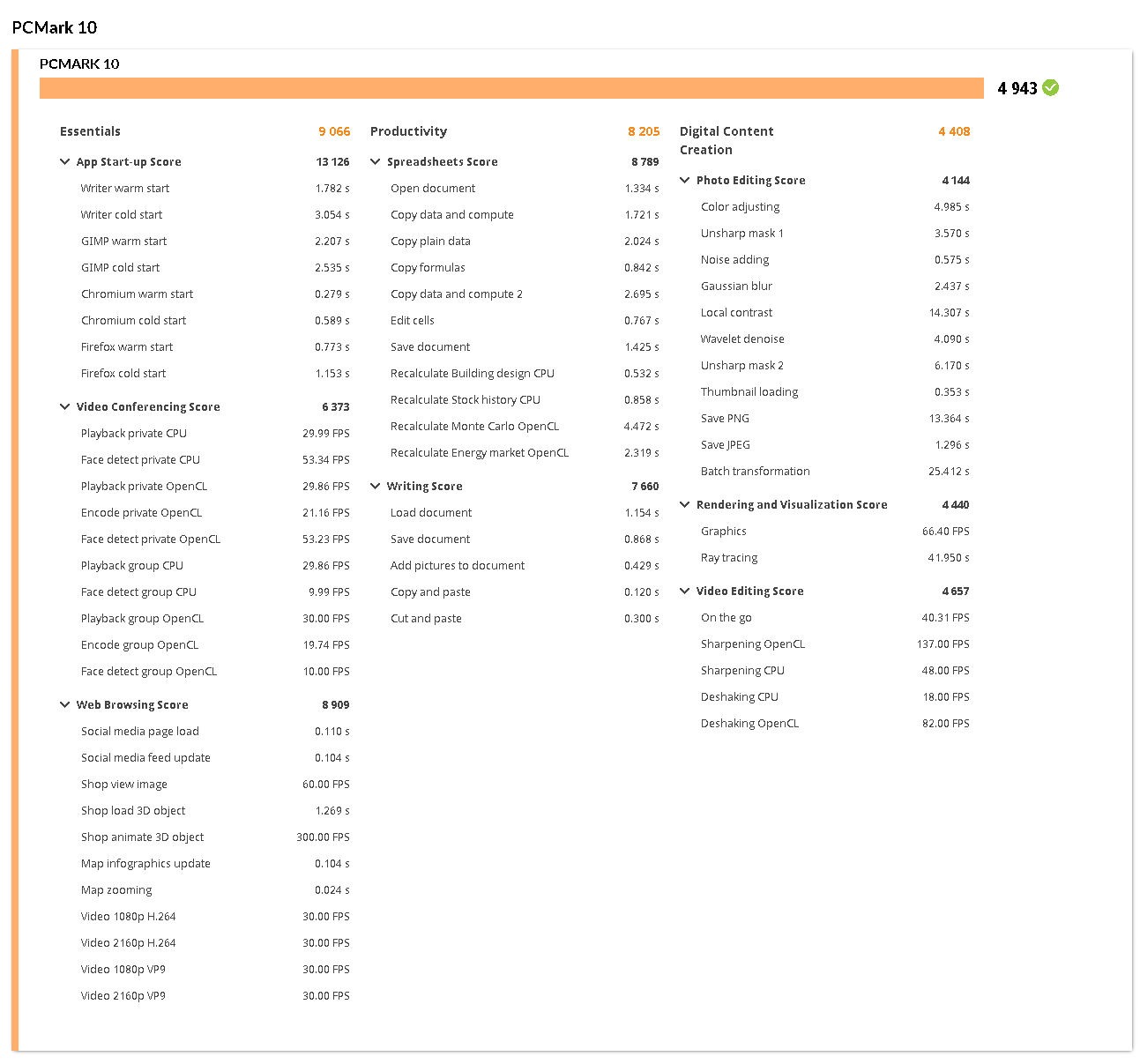 Here, the ThinkStation P330 put up some decent numbers in the Essentials (9,066) and Productivity (8,205) categories, though it slowed down quite a big in the Digital Content Creation column (4,408), which expected due to its GPU and RAM configuration.

Next up is SPECworkstation3. This is a test that specializes benchmark designed for testing all key aspects of workstation performance; it uses over 30 workloads to test CPU, graphics, I/O, and memory bandwidth. The workloads fall into broader categories such as Media and Entertainment, Financial Services, Product Development, Energy, Life Sciences, and General Operations. We are going to list the broad-category results for each, as opposed to the individual workloads. The results are an average of all the individual workloads in each category.

Though these scores were certainly in the low-range, the P330 fared quite well for its configuration, especially the general operations category.

Last up is the Environmental Systems Research Institute (Esri) benchmark. Esri is a supplier of Geographic Information System (GIS) software. Esri’s Performance Team designed their PerfTool add-in scripts to automatically launch the ArcGIS Pro. This application uses a “ZoomToBookmarks” function to browse various pre-defined bookmarks and create a log file with all the key data points required to predict the user experience. The script automatically loops the bookmarks three times to account for caching (memory and disk cache). In other words, this benchmark simulates heavy graphical use that one might see through Esri’s ArcGIS Pro software.

The tests consist of three main datasets: two are 3-D city views of Philadelphia, PA and Montreal, QC, which contain textured 3-D multipatch buildings draped on a terrain model and draped aerial images. The third dataset is a 2-D map view of the Portland, OR region. This data contains detailed information for roads, land use parcels, parks and schools, rivers, lakes, and hill shaded terrain.

The Lenovo ThinkStation P330 is a great entry-level workstation that can fit a range budgets due to its highly customizable build options. For high-end configurations, which reach as high as $6,000, users can equip the P330 with an Intel Core i9-9900 vPro (3.10GHz, 8 Cores, 16MB Cache) CPU, a Thunderbolt card, up to 64GB of RAM via its four 2666MHz UDIMMs, a NVIDIA Quadro P5000 16GB and two 1TB SSDs. Our review model was a bit on the lower end, however, with an Intel Xeon e-2224 (3.60GHz, Turbo Boost, 4 Cores, 8MB Cache), 16GB of RAM, NVIDIA Quadro P620 GPU, and an WDC SN730 512GB SSD. Though the higher-end Lenovo ThinkStation P330 configurations won’t be able to satisfy ultimate performance use cases, it certainly provides a ton of options for those who want an entry-level workstation all the way to mid-range needs.

For performance, we pitted the P330 against the higher-classed ThinkStation P520, where we ran our usual graphics heavy tests that include SPECviewperf 13, SPECworkstation3, and ESRI ArcGIS Pro. We also ran PCMark to gauge how workstation will function under basic workloads like essentials, productivity, and digital content creation.

Even though you can outfit the Lenovo ThinkStation P330 with some pretty good components, it is really aimed for lower-end to mid-range use cases. That said, this VR-ready workstation is a perfect entry-level solution for those on a budget as well as those who don’t have the need for best-of-class performance.