The Corsair Force LS SSD Series is designed to be a value-oriented alternative largely for global-market consumers wanting to upgrade their PCs or Notebook at a reasonable price. Though Corsair is mostly known for their excellent and quality-built memory modules, they were one of the first SSD manufacturers to enter the retail market and have ultimately earned a reputation as building some of the best SSDs available, as well as providing drives that cover the whole price and performance spectrum. The Force LS is placed on the lower part of this spectrum and is considered labeled as a budget SSD by Corsair.

The Corsair Force LS SSD Series is designed to be a value-oriented alternative largely for global-market consumers wanting to upgrade their PCs or Notebook at a reasonable price. Though Corsair is mostly known for their excellent and quality-built memory modules, they were one of the first SSD manufacturers to enter the retail market and have ultimately earned a reputation as building some of the best SSDs available, as well as providing drives that cover the whole price and performance spectrum. The Force LS is placed on the lower part of this spectrum and is considered labeled as a budget SSD by Corsair. 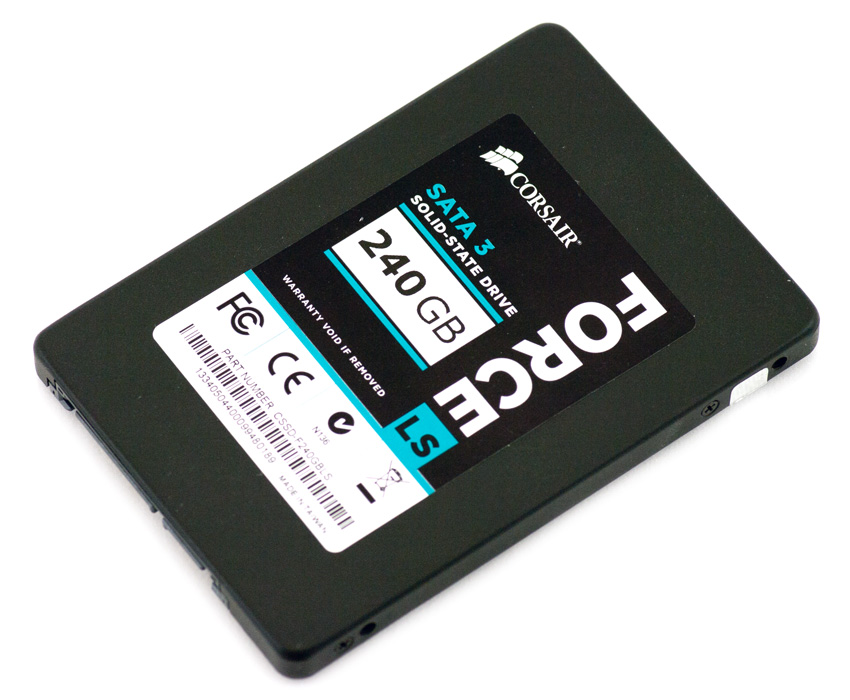 Corsair has released previous SSDs with a variety of controllers inside including SandForce, Marvell and LAMD. Proving themselves controller agnostic again, they have decided to partner with Phison for the LS. The Force LS was built to try and fit the mainstream performance at a reasonable price role. As the controller is a key cost point of any SSD, the selection of the Phison PS3108 controller, which is supposed to be an economical solution with respectable performance numbers, makes a good deal of sense.

The Corsair Force LS is available in capacities of 60 GB, 120 GB, and 240 GB. The unit we are reviewing is the 240GB, which is available for approximately $200 online. Unfortunately, the Force LS Series is not widely available in the US as it’s largely intended for global markets; though it may find sporadic distribution in North America.

The Force LS Series SSD is enclosed by an all-metal top casing, making it a durable drive that keeps the circuit board well-protected from the elements.  The top cover’s label comprises a nice combination of black, white and turquoise and is secured to the bottom cover with four small Phillips-head screws on each corner.

The drive conforms to the dimensions of a 2.5" form factor. The height of the Force LS Series SSD is only 7 mm, which makes it compatible with Ultrabooks. 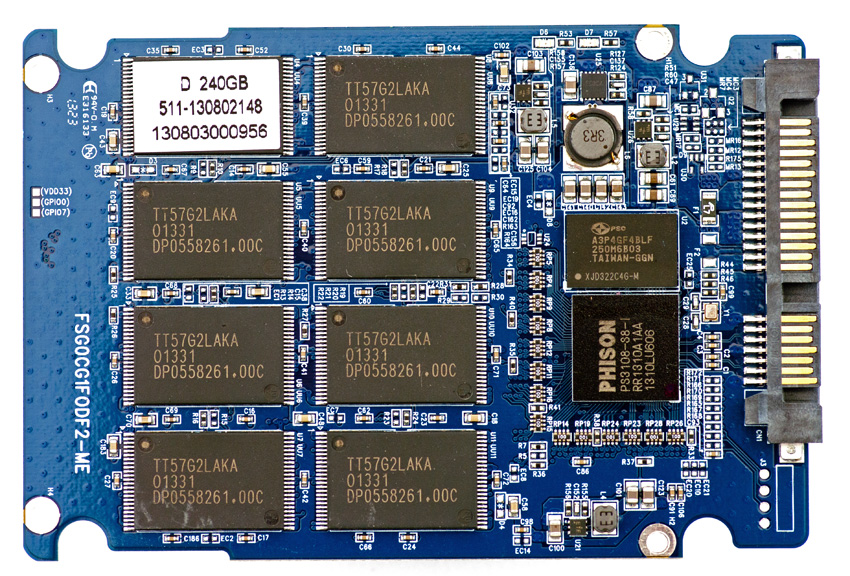 Like SSDs nowadays, the Force LS uses the SATA 6 Gbp/s interface. Though it is compatible with older SATA standards, it will function at a reduced performance. 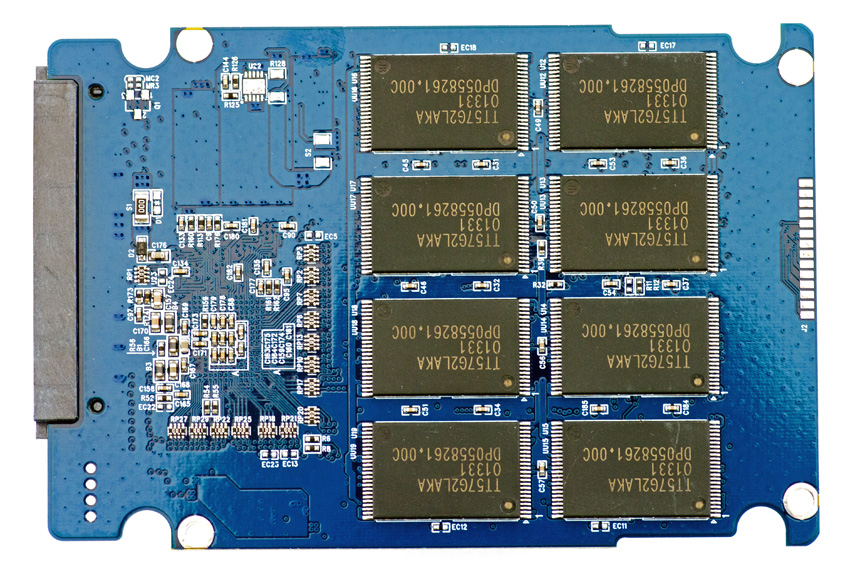 Removing the four Phillips-head screws reveals the Force LS, which consists of 16 NAND packages–eight channels per side. This works out to be 16GB per package with each package having two 8GB dies.

In our first test measuring 2MB sequential performance, the Force LS measured 509.8MB/s read and 381.8MB/s write, outperforming all of the competition in the read column, but coming in dead last by a noticeable margin in write activity performance.

In our next test looking at 2MB random transfer performance, the Force LS measured 396.6 MB/s read and 380.2MB/s write, which is right at the bottom of the pack.

Switching to smaller 4K random transfers, the Force LS only measured in at 5,885 IOPS read activity but came in top place in the write column with a blistering 21,198 IOPS write activity. 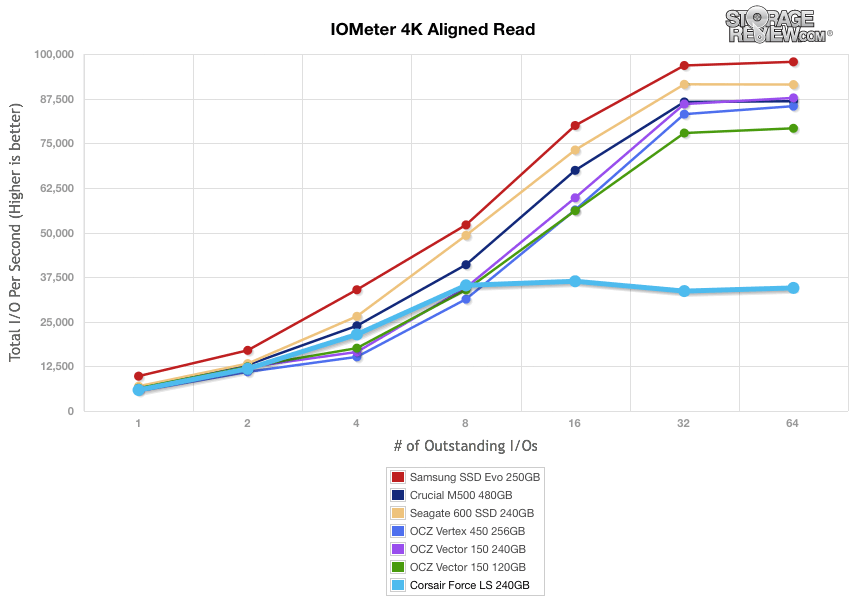 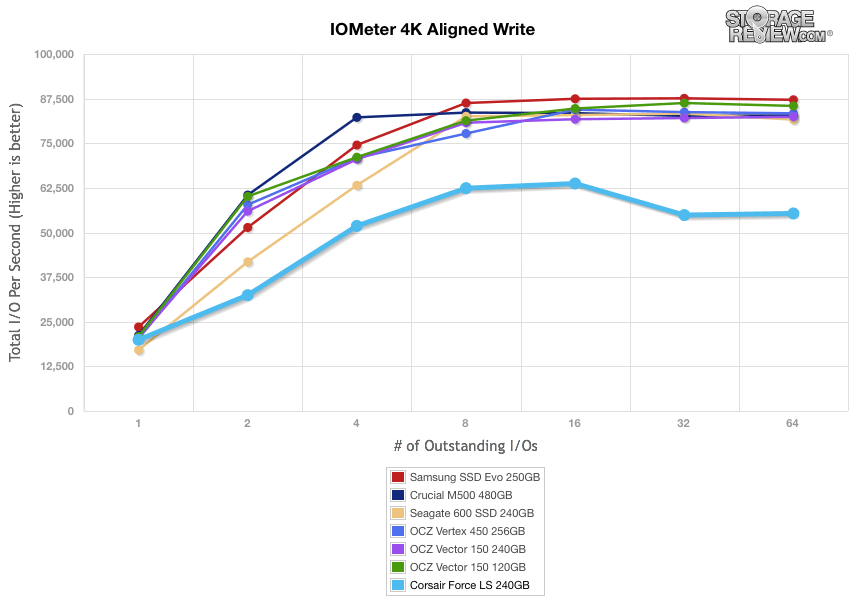 Comparing average write latency between each consumer SSD, the Force LS ranked at the top of the pack with a time of 0.047ms average latency with a peak latency of 3.352ms. 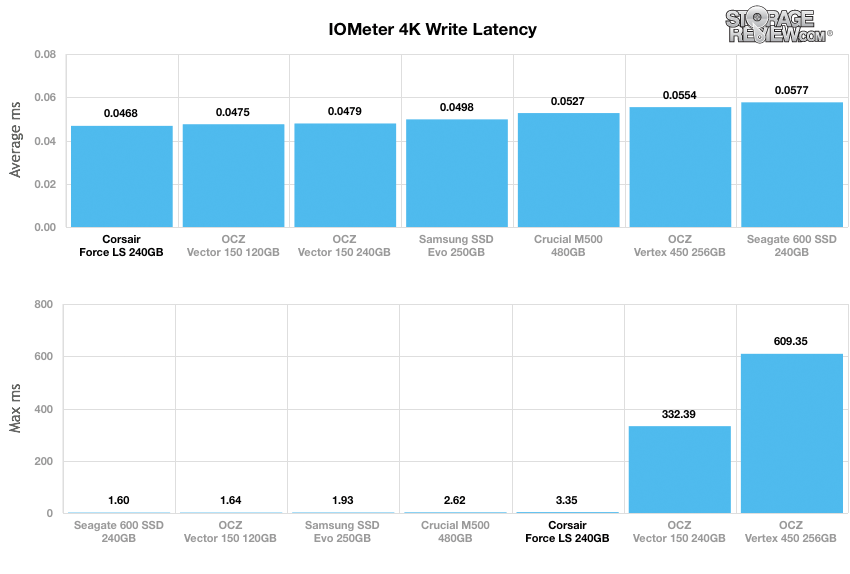 Our last series of synthetic benchmarks compare the hard drives in a series of server mixed-workloads with a queue depth of ranging from 1 to 128. Each of our server profile tests has a strong preference towards read activity, ranging from 67% read with our database profile to 100% read in our web server profile. In all of our mixed workloads, the LS Force ranked last in all of the profiles. 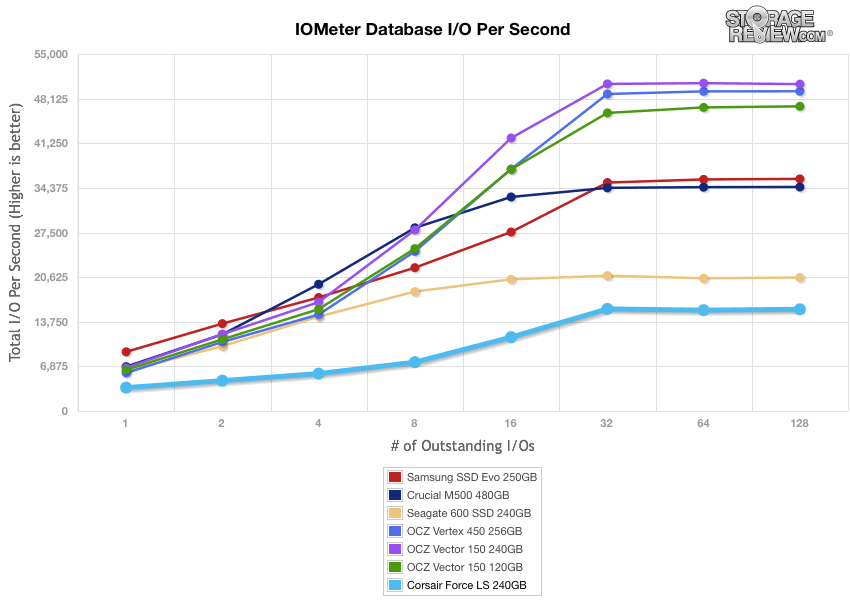 The next profile looks at a file server, with 80% read and 20% write workload spread out over multiple transfer sizes ranging from 512-byte to 64KB. The Corsair Force LS delivered Q1 throughput of 3,419 IOPS and 13,360 IOPS by Q128 trailing the other drives significantly 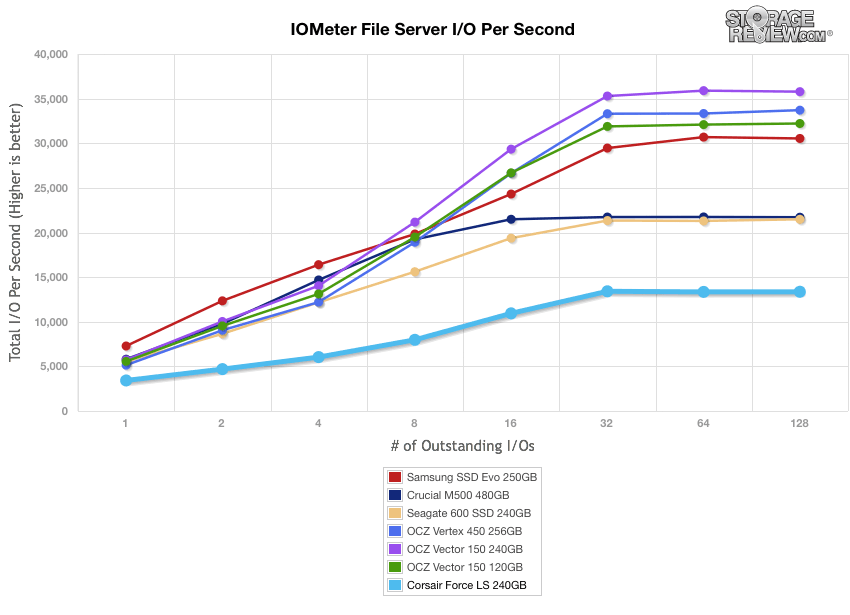 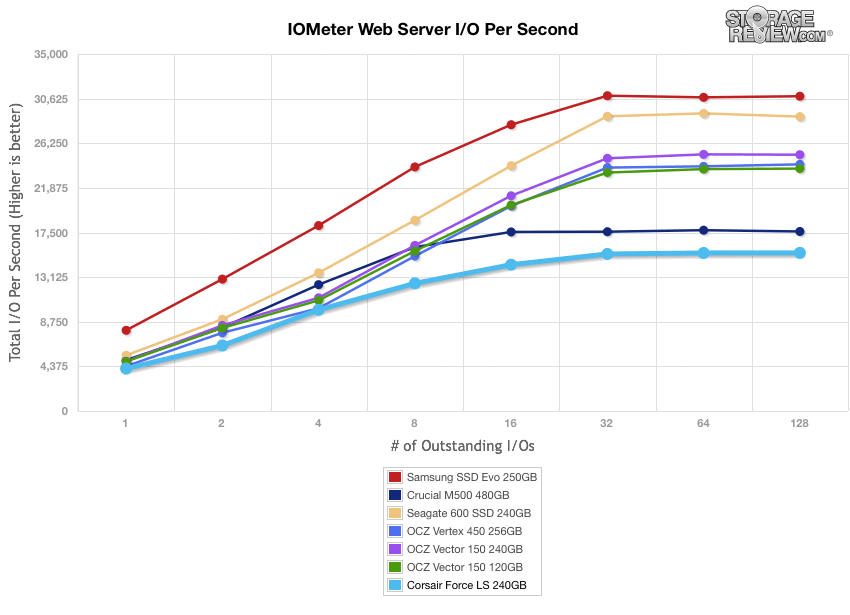 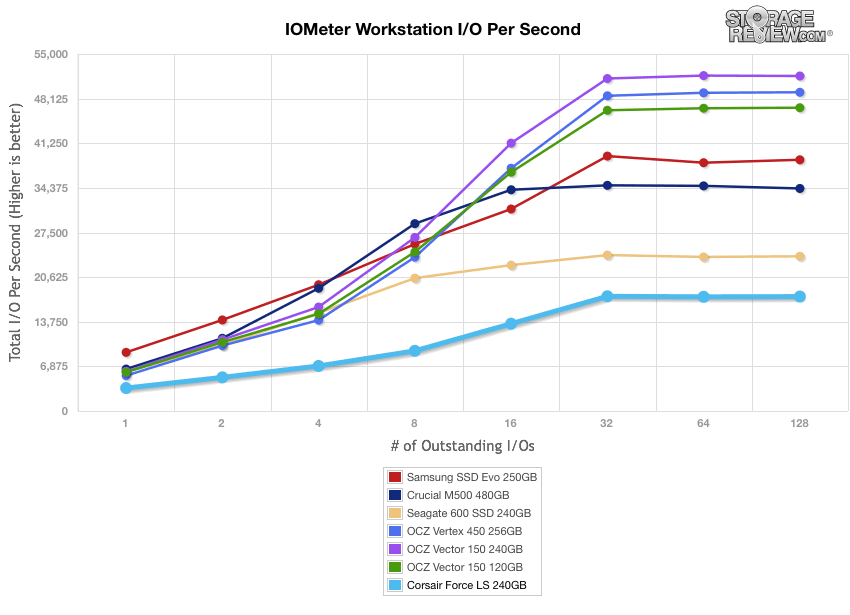 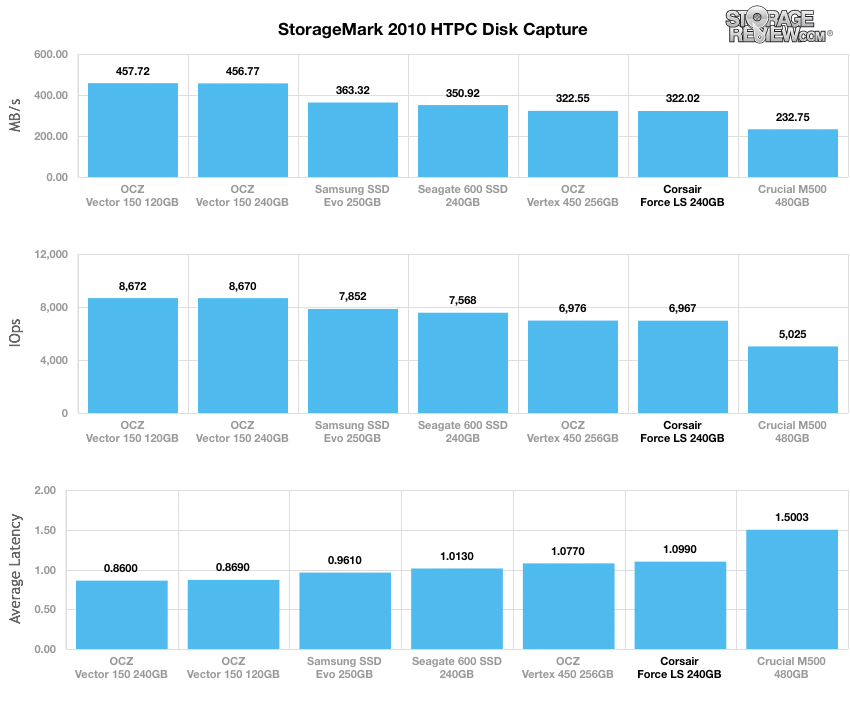 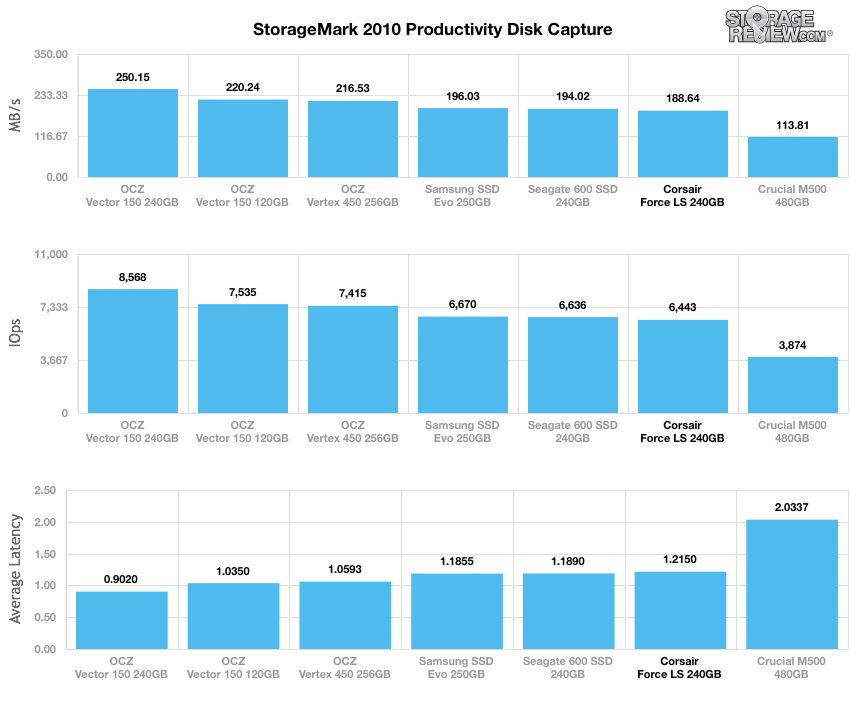 In our Productivity trace, the Force LS registered 188.6MB/s, which ranked 2nd last and just above the Crucial M500. 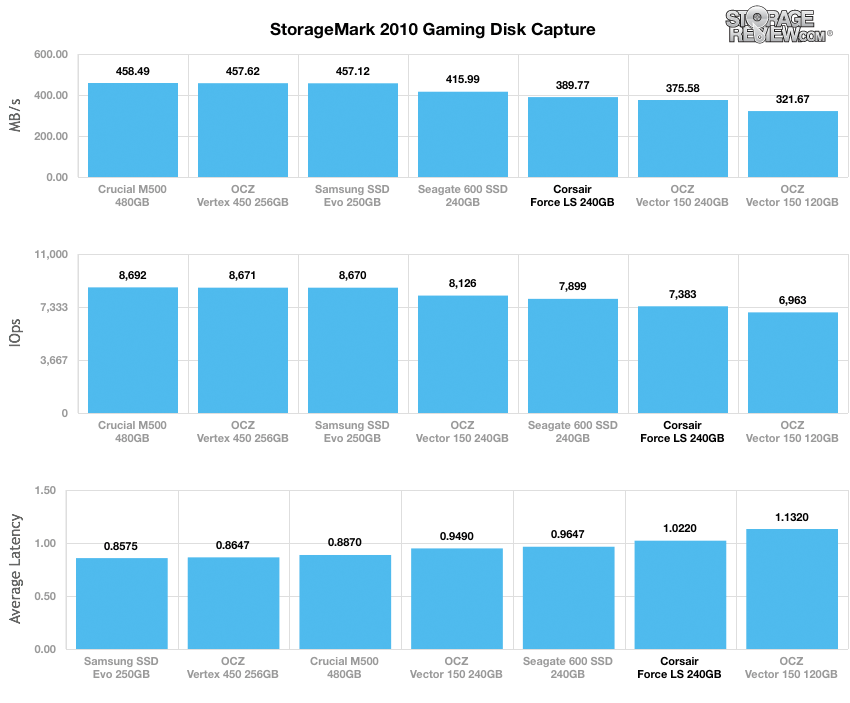 In our read-intensive Gaming trace, Force LS produced only 389.6MB/s but with a good average latency of 1.02ms.

In our tests, we measured idle power consumption from the Force LS at 0.30W as well as 4.58W and 2.36W during sequential write and read activity respectively.

The Corsair ships in 60 GB, 120 GB, and 240 GB capacities and is the company's first mid-range capacity, value-line SSD. As we predicted, the Corsair Force LS sometimes struggled performance-wise to compete with most of the high-end drive comparables with its Phison PS3108 controller, showing a vast difference in performance numbers in certain areas. However, it did perform surprisingly well in the sequential read column, beating its competition handily. The Corsair Force LS SSD is positioning itself into a competitive market, however it’s quite obvious that the Phison controller is starting to take big strides to catch up with the competition.

Although the overall performance of the Force LS wasn't on par with the higher-end units, it did do well for its category and while this SSD can be recommended to an average user, it must be cheaper (or priced similar to other budget drives like the 840 EVO) to warrant the purchase. Saving a few dollars really isn’t enough to merit the "budget" label on its own. With an international price of $200 for the 240GB version, it's not an inexpensive drive, especially when looking at performance per dollar or price per GB. Consumers can also sometimes find a good sale on some of the older generation higher-end drives that might end up less than the street price of the Corsair Force LS. This all being said, pricing is still a little difficult to evaluate since the Force Series LS SSDs are not yet even available in North America and are not even listed on the US Corsair website. Ultimately the buying decision is going to come down to price. If the LS can be had for significantly less than other current generation drives, the average user who's on a HDD now will be thrilled with the step up in performance. If it maintains price-parity with other leading SSDs, including the higher-end offerings from Corsair, buyers are best suited spending a little more for the better performing drive.

The Corsair LS comes from a trusted name in the SSD business and when priced materially less than other current generation SSDs, makes a lot of sense for buyers who want more out of their existing hard-drive based machines.