The Synology DiskStation DS713+ is a two-bay NAS designed for use cases that need plenty of power but don’t have high-capacity requirements. The DS713+ has a max internal capacity of 8TB (using 2 4TB HDD, one in each bay), a dual core 2.13GHz processor, 1GB of DDR3 memory, and Synology’s Disk Station Manager 4.3 software. The DS713+ comes with all types of connectivity, coming with USB 2.0, USB 3.0, Ethernet, and eSATA ports. Though it looks very similar to its predecessor, the DS712+, the DS713+ has two USB 3.0 ports and comes with a 20 IP camera capacity (the DS712+ had no USB 3.0 ports and only supported 16 IP cameras).

The Synology DiskStation DS713+ is a two-bay NAS designed for use cases that need plenty of power but don’t have high-capacity requirements. The DS713+ has a max internal capacity of 8TB (using 2 4TB HDD, one in each bay), a dual core 2.13GHz processor, 1GB of DDR3 memory, and Synology’s Disk Station Manager 4.3 software. The DS713+ comes with all types of connectivity, coming with USB 2.0, USB 3.0, Ethernet, and eSATA ports. Though it looks very similar to its predecessor, the DS712+, the DS713+ has two USB 3.0 ports and comes with a 20 IP camera capacity (the DS712+ had no USB 3.0 ports and only supported 16 IP cameras).

While the DS713+ works great as a starting place for home or small business storage, it is scalable with an expansion unit, so when you are ready to expand you can with no problem. Using the eSATA port, users can add a DX513 expansion unit. The DX513 offers users an additional 5 bays giving them 7 drives populating their DS713+ and DX513 units, or up to 28TB raw. The DS713+ supports both 2.5″ and 3.5″ drives giving users the flexibility to use a range of drives to meet capacity, performance and budget goals.

The Synology DiskStation DS713+ has a street price of $500.00 with a three-year limited warranty.

The design of the DS713+ is very similar to the design of Synology’s previous dual-bay server, DiskStation DS712+. The unit is composed mainly of black metal, though the drive trays and buttons are plastic. The front of the unit has LED display lights for activity on the right side. On the bottom right side is the power button. Above the power button is a USB 2.0 port for a quick back up of USB devices such as a thumbdrive. Right above the USB port is a quick copy button. 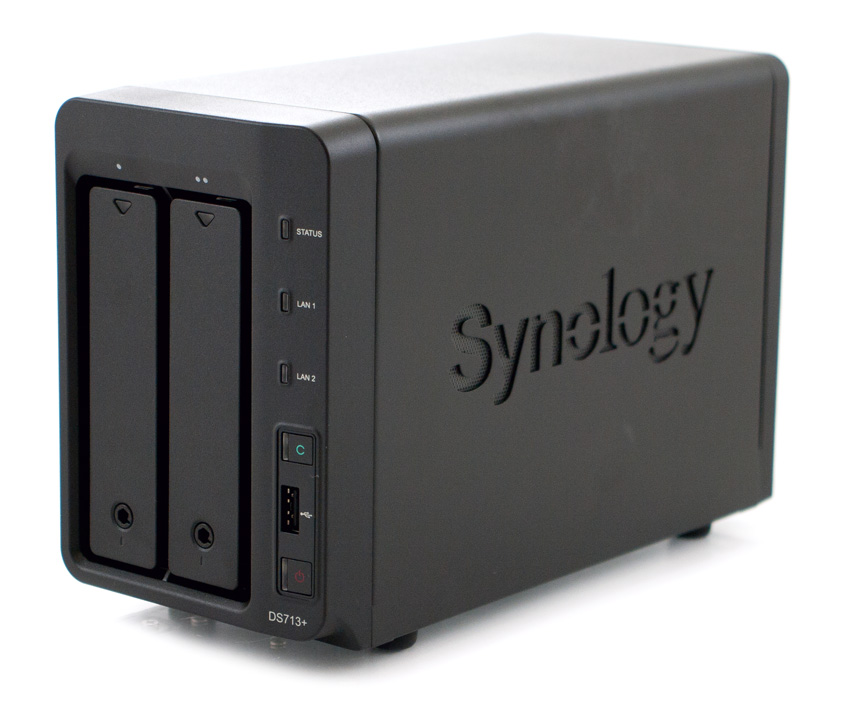 The drives can easily be loaded through the front of the unit. Each bay can also be locked to prevent accidental drive removal. Unlike other new Synology models, the trays inside the DS713+ are the old style that require screws versus the new tool-less design. The side of the DiskStation has the Synology branding. 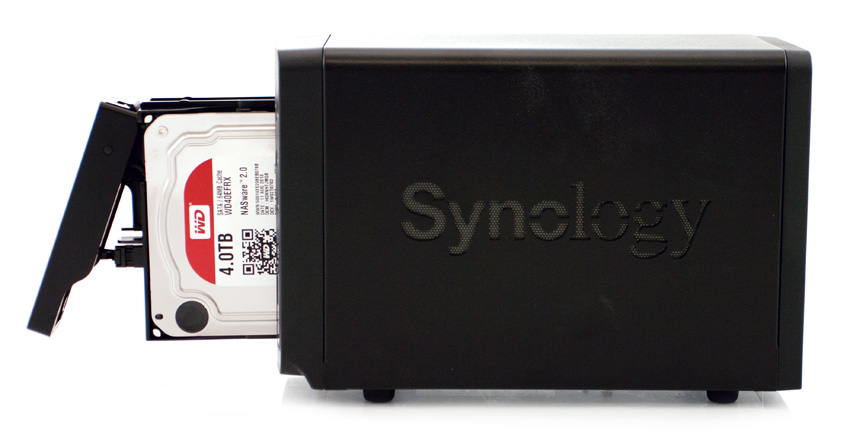 The rear of the DS713+ has a 92mm fan taking up the top part of the unit, keeping the system cool without creating much noise in the process. On the bottom left side, above the power cord, are 2x Ethernet 1GbE ports. The bottom center has 2x USB 3.0 ports. And on the bottom right is an eSATA port. 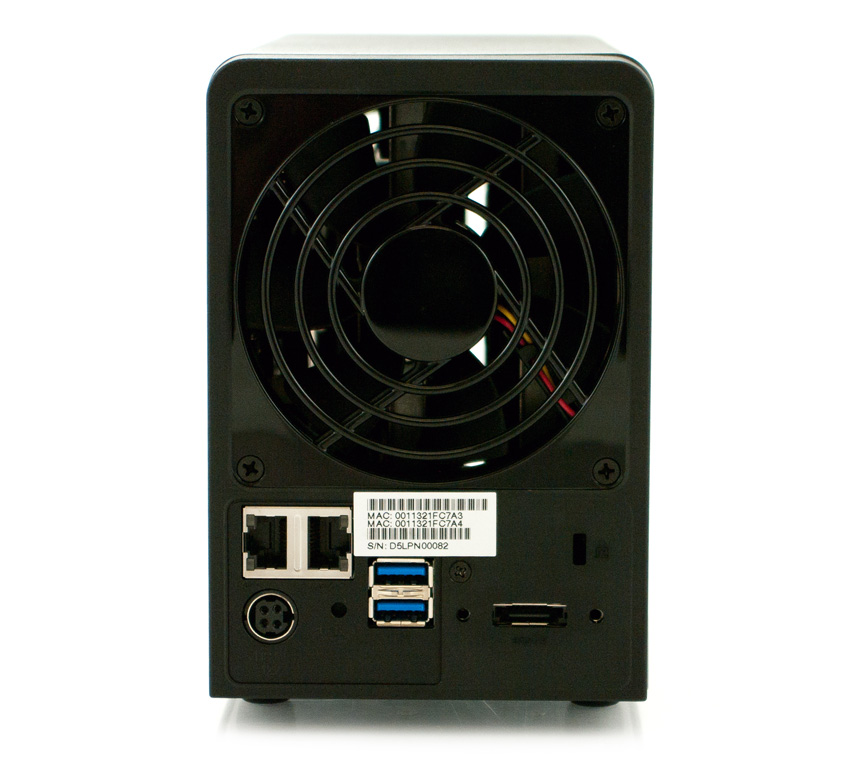 We tested both CIFS and iSCSI performance using RAID1 configurations of three popular 3.5″ 7,200RPM and 5,400RPM hard drives: the WD Red, WD Se and Seagate NAS, all 4TB. All three of the drives are suited to operate in NAS environments.

In order to fairly evaluate the performance of the Synology DiskStation DS713+, we need an environment that ensures that the DS713+ is the I/O bottleneck rather than the network. Therefore this review employs a Lenovo ThinkServer RD240 running multiple Windows Server 2012 VMs in an ESXi 5.1 environment connected via a quad-port Intel i350-T4 NIC through a Netgear ProSafe GS752TXS switch.

In the first of our enterprise workloads, we measured a long sample of random 4k performance with 100% write and 100% read activity to get our main results. The WD Se 4TB RAID1 iSCSI provided the greatest throughput in read activity at 497 IOPS (though the WD Red was neck and neck with 496 IOPS), while the best for write activity was also delivered from the WD Se RAID1 SMB at 477 IOPS passing the other by a good margin.

In our main average latency segment with a load of 16T/16Q, the WD Se 4TB iSCSI again came out ahead with the lowest read latency of 513.97ms (barely beating out the WD Red 4TB iSCSI) with the WD Se 4TB RAID1 SMB reading the lowest write response time with 536.18ms.

Our next benchmark measures 100% 8K sequential throughput with a 16T/16Q load in 100% read and 100% write operations. The WD Se 4TB RAID1 SMB had both the highest throughput read and write activity with 18,725 IOPS and 14,183 IOPS respectively, being closely followed by the WD Red 4TB SMB.

Compared to the fixed 16 thread, 16 queue max workload we performed in the 100% 4k write test, our mixed workload profiles scale the performance across a wide range of thread/queue combinations. In these tests, we span workload intensity from 2 threads and 2 queue up to 16 threads and 16 queue. In the expanded 8k 70/30 test, the WD Se 4TB iSCSI provided the greatest throughput for a throughout the test. 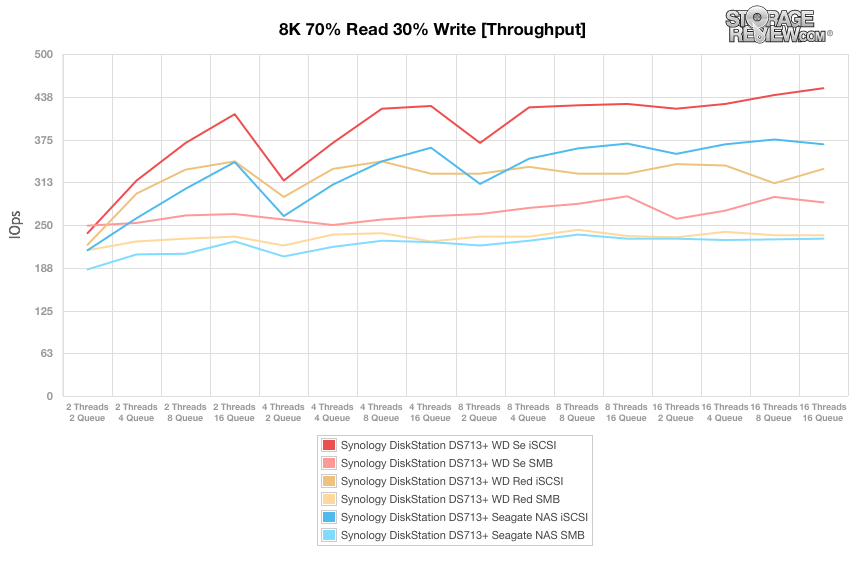 With the 8k 70/30 average response times, the WD Se 4TB iSCSI had the lowest peak overall average latency at nearly 567.53ms, beating out the others tested with the next lowest being the Seagate NAS 4TB iSCSI at 693.35ms. 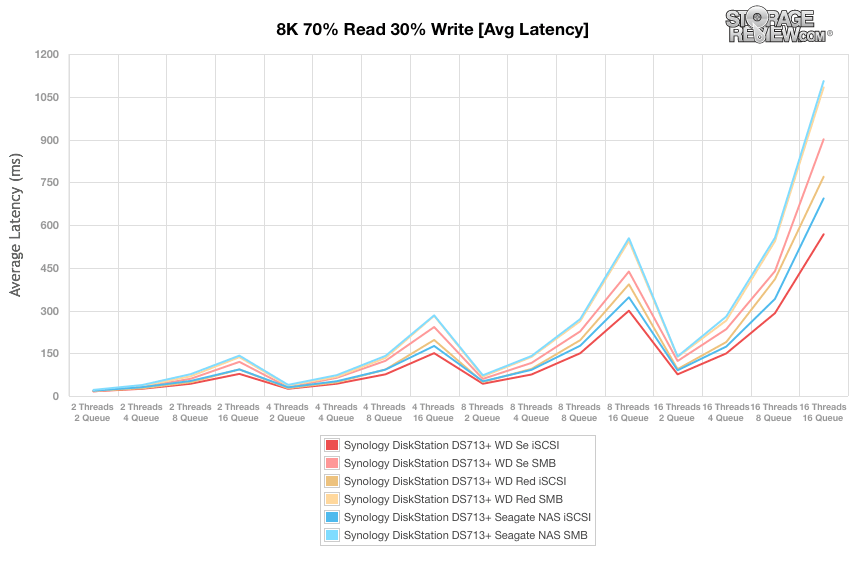 Over the duration of our primary tests at varying thread and queue depth levels, the WD Se 4TB iSCSI again had a lower max latency than the other drives at 2035.81ms. Just barely above it, the WD Red 4TB iSCSI also placed well at 2522.22ms. 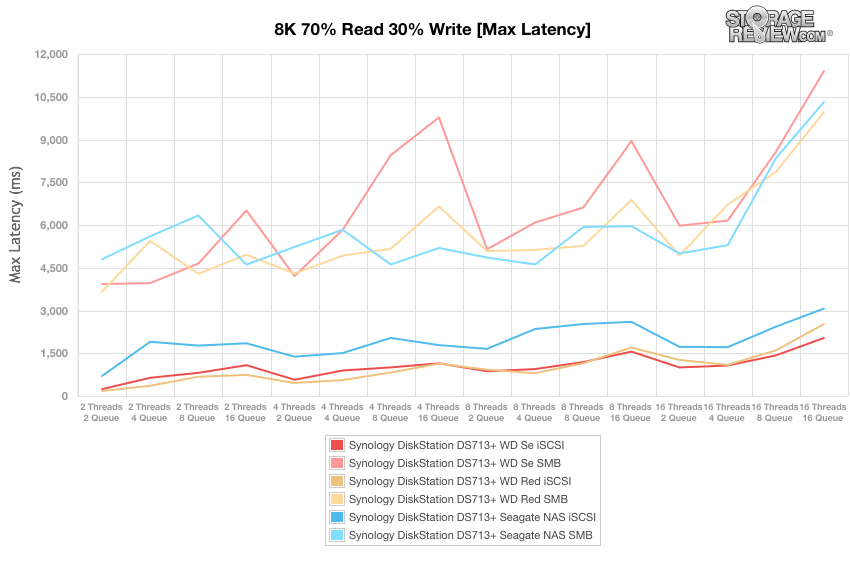 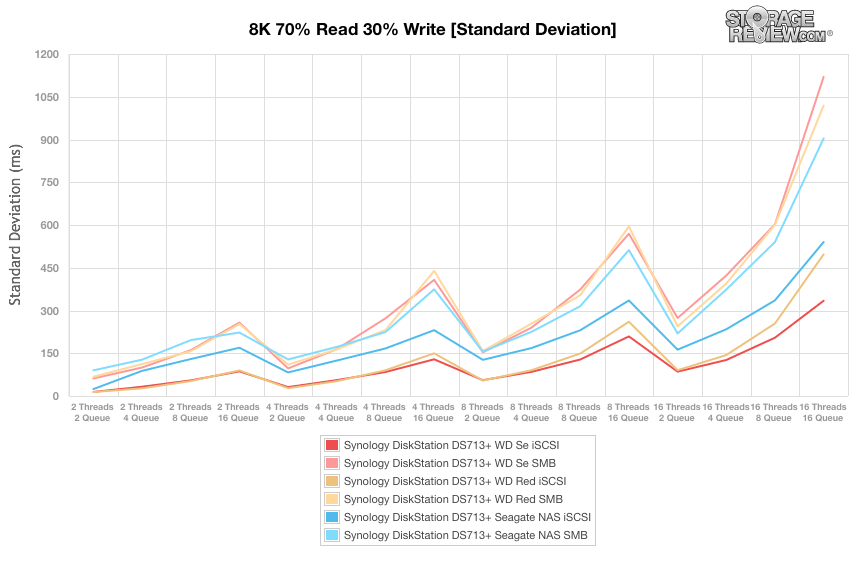 The last test in our Enterprise Synthetic Workload testing is the 128k test which is a large block sequential test that shows the highest sequential transfer speed for a platter drive. Looking at the 128k performance of 100% write and 100% read activity, the WD Red 4TB SMB and the WD Se 4TB SMB were virtually tied delivering the greatest throughput for read activity at 231,186KB/s for the WD Red and 231,185KB/s for the WD Se, while the WD Se 4TB SMB delivered the greatest write activity mark by a large margin at 183,317KB/s.

The DiskStation DS713+ is Synology’s high-performance 2-bay NAS that provides up to 8TB of raw capacity with 4TB HDDs, which can be expanded to 28TB through the add-on 5-bay DX513 expansion unit. The compact DS713+ now provides the same 2.13GHz processor found in larger 5-bay and 8-bay models, although unlike larger models the RAM is not upgradable. Upgrades from the previous DS712+ include the addition of USB 3.0 ports for faster performance from external storage, as well as support more simultaneous HD camera streams thanks to its faster processor.

We measured the performance of the Synology DiskStation DS713+ using popular Western Digital and Seagate 4TB hard drives optimized for use in NAS platforms. In our tests with the 7,200RPM WD Se, we found random 4K access performance to top at 497 IOPS read and 274 IOPS write while large-block sequential speed topped out at 231MB/s read and 183MB/s write. The most cost-effective 5,400RPM WD Red measured 496 IOPS read and 191 IOPS write, with sequential read performance still peaking at 231MB/s read, although write speed dipped to 105MB/s.

Overall the DS713+ offers enthusiast buyers and SMB shoppers a lower cost of entry for the upper-tier 2.13GHz processor, with the limitation of two 3.5″ HDD bays and half the 1GbE ports of the 5-bay DS1513+ or the 8-bay DS1813+. Synology does offer a path to increase capacity through the 5-bay DX513, which boosts the RAID group size to 7 disks on the DS713+, or 28TB raw.  The DS713+ can save buyers $300 compared to the street cost of the 5-bay DS1513+ for users that don’t need additional storage capacity at the start. That savings can quickly disappear though if buyers need to purchase the expansion unit to meet growing storage requirements, instead of buying the larger 5 or 8-bay model at the onset.

The Synology DiskStation DS713+ offers a lot power in a little box, and provides flexibility to businesses that don’t need a lot of storage at first but may like to upgrade easily in the future.