The Corsair MP400 is a consumer-grade NVMe PCIe M.2 SSD that leverages the Gen3 interface. Because Corsair uses 3D QLC NAND with this new line of drives, they lean more towards the high capacity and cost-effective category versus drives that use other types that are solely focused on performance. This allows the MP400 to offer a wide range of models from 1TB to a massive 8TB, which is one of the highest capacities we’ve seen for a consumer SSD. Nonetheless, it has been quite a while since we’ve had a Corsair drive in the test lab, so it will be interesting to see how it stacks up against other recent Gen3 SSDs.

The Corsair MP400 is a consumer-grade NVMe PCIe M.2 SSD that leverages the Gen3 interface. Because Corsair uses 3D QLC NAND with this new line of drives, they lean more towards the high capacity and cost-effective category versus drives that use other types that are solely focused on performance. This allows the MP400 to offer a wide range of models from 1TB to a massive 8TB, which is one of the highest capacities we’ve seen for a consumer SSD. Nonetheless, it has been quite a while since we’ve had a Corsair drive in the test lab, so it will be interesting to see how it stacks up against other recent Gen3 SSDs. 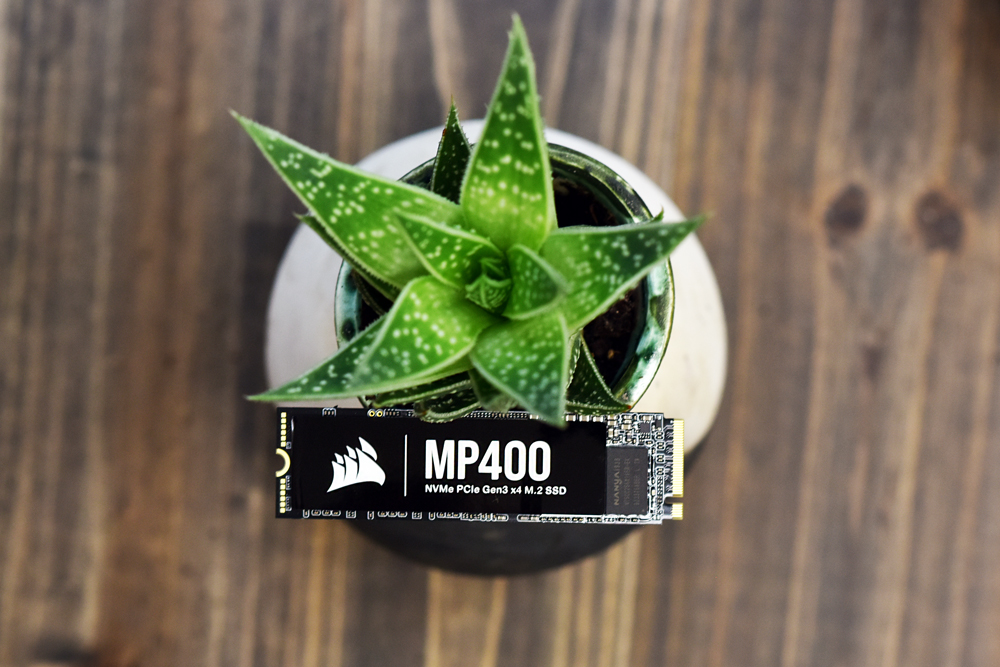 There are no real surprises here for quoted performance, as the MP400 is expected to deliver the usual numbers for a consumer-grade Gen3 NVMe SSD. Corsair indicates that their drive can reach speeds up to 3,480MB/s read and 3,000MB/s write in sequential activity, while random 4K performance is expected to hit up to 560,000 IOPS write and 380,000 IOPS read. 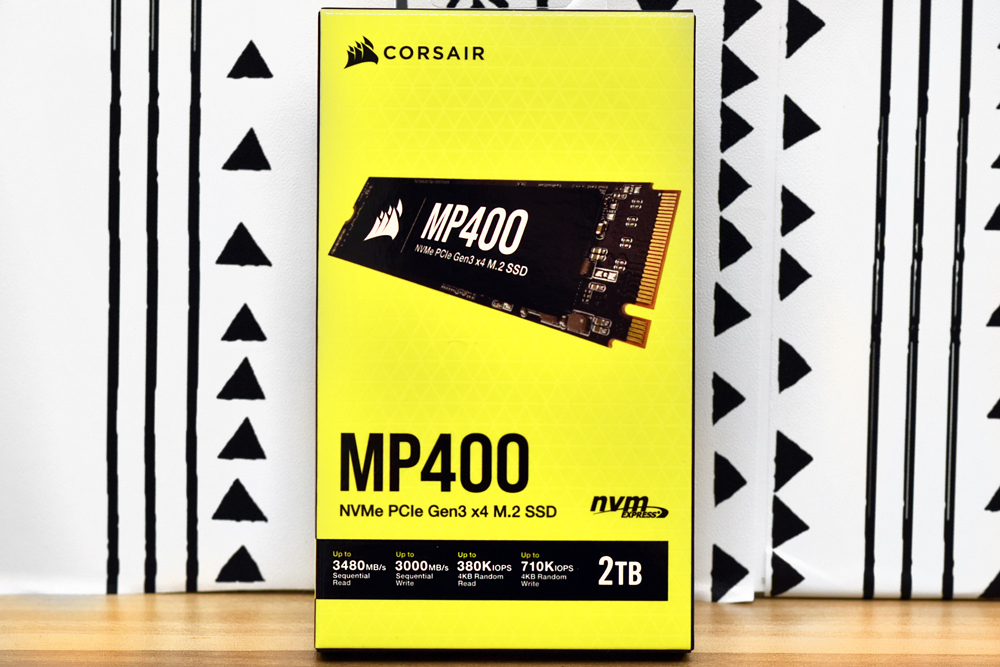 The MP400 is managed and monitored by the Corsair SSD Toolbox software, which gives users easy access to features like secure erase, firmware updates, and SMART drive functionality. The MP400 also features up to 400TBW and up to 1,800,000 hours for MTBF, and features the standard AES 256-bit Encryption technology with an average of 5.5W for active power consumption.

The Corsair MP400 features a nice minimalist design. The company logo is located on the left while the product name on the right in big bold white font via a slick-looking, black vinyl sticker. 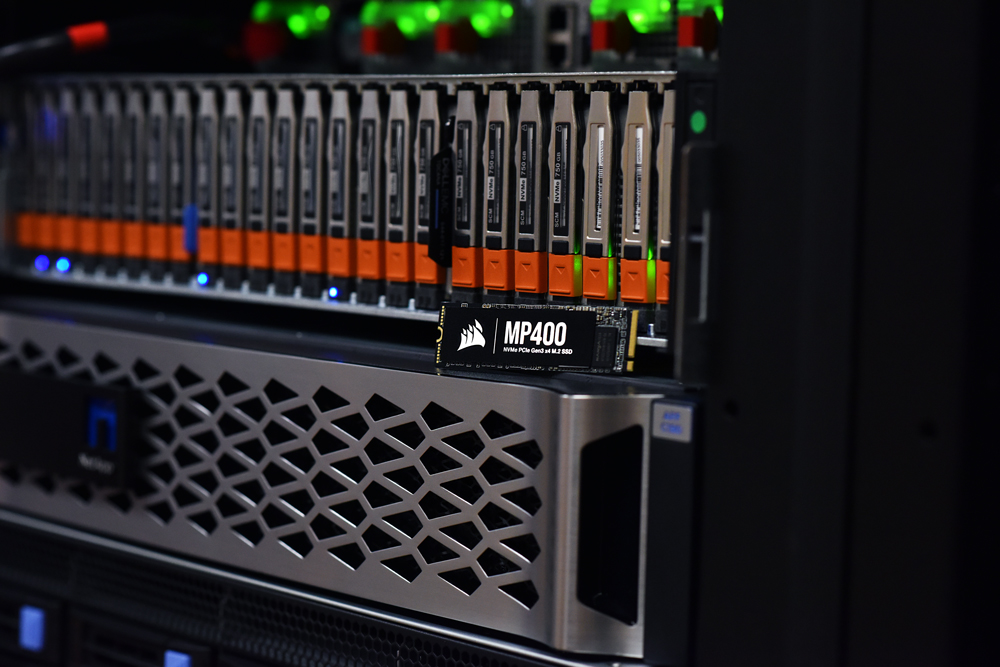 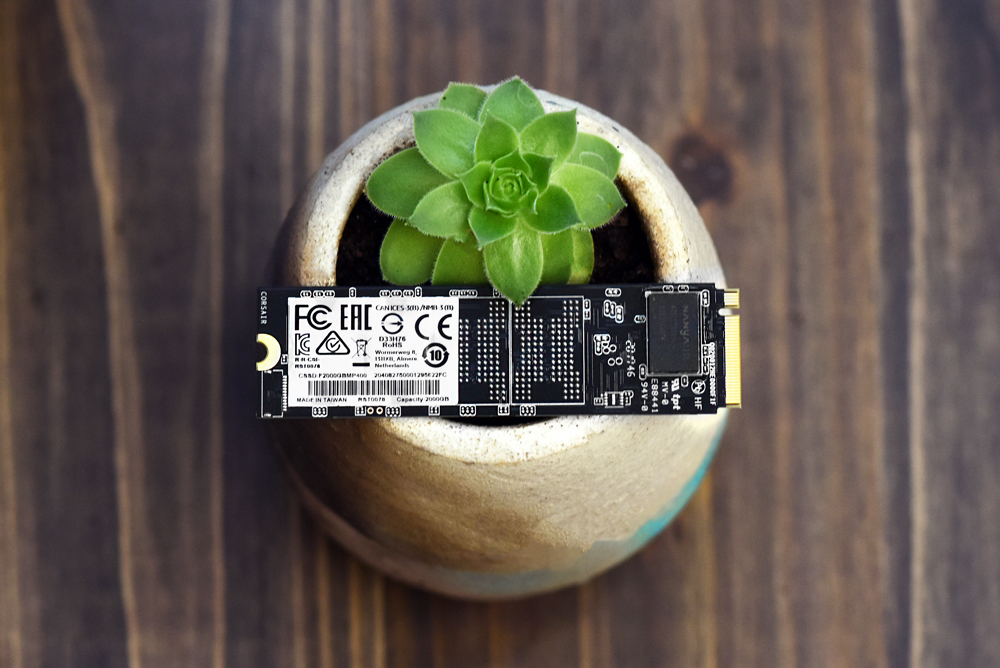 Our SSD reviews leverage a Lenovo ThinkSystem SR850 for application tests (Note: we had to use an adapter card instead of a front bay slot due to a compatibility issue) and a Dell PowerEdge R740xd for synthetic benchmarks. The ThinkSystem SR850 is a well-equipped quad-CPU platform, offering CPU power well in excess of what’s needed to stress high-performance local storage. Synthetic tests that don’t require a lot of CPU resources use the more traditional dual-processor server. In both cases, the intent is to showcase local storage in the best light possible that aligns with storage vendor maximum drive specs.

The Corsair MP400 showed 9ms in average latency. As you can see, the MP400 is very unique compared to previous QLC drives we’ve tested, as it’s the first one to handle the test/dev SQL Server workload without skyrocketing latency. 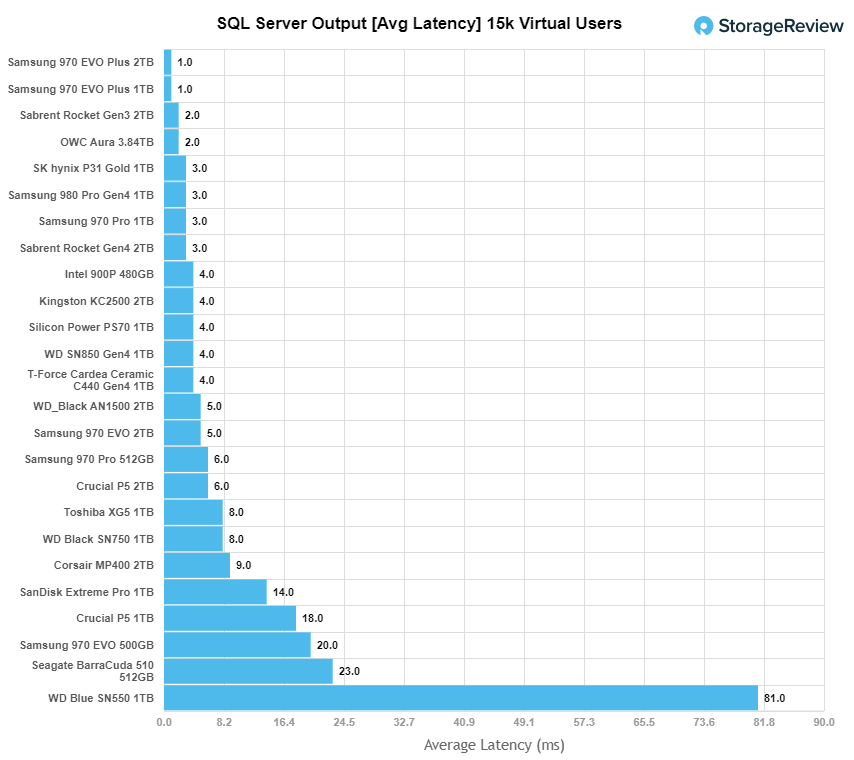 These workloads offer a range of different testing profiles ranging from “four corners” tests, common database transfer size tests, to trace captures from different VDI environments. All of these tests leverage the common vdBench workload generator, with a scripting engine to automate and capture results over a large compute testing cluster. This allows us to repeat the same workloads across a wide range of storage devices, including flash arrays and individual storage devices.

Our testing process for QLC partitions a drive section equal to 1% of the drive capacity to simulate how the drive might respond to application workloads. This is different than full entropy tests which use 100% of the drive and take them into a steady state. As a result, these figures will reflect higher-sustained write speeds.

For random 4K read, the Corsair MP400 showed consistent performance with a solid peak score of 364,345 IOPS at a latency of 350.2µs, narrowly behind the Crucial P1 at the end.

Next, we looked at our VDI benchmarks, which are designed to tax the drives even further. These tests include Boot, Initial Login, and Monday Login. Looking at the Boot test, the Corsair MP400 showed mid-range performance, peaking at 88,750 IOPS with a latency of 352.9µs before experiencing a spike in IOPS at the end (though still leaps and bounds better than the other drives).

VDI Initial Login, the MP400 suffered some serious performance spikes towards the end of the test, peaking at 38,105 IOPS with a latency of 783.7µs.

The next generation of PCIe is here, but that doesn’t stop companies from bringing quality (and still higher-in-demand) Gen3 drives to the market. The MP400 is no exception, as Corsair has created a solid PCIe 3.0 NVMe SSD that is a great choice for those looking to both upgrade and add to their current system.

Its range of high-capacity models (including a massive 8TB) also allows this QLC-based SSD to fit a variety of budgets, though that means users who need smaller capacities will have to look elsewhere since 1TB is as low as it goes. Nonetheless, the MP400 is a speedy drive that features up to 400TBW, 1,800,000 MTBF, AES 256-bit Encryption, and an average of 5.5W for active power consumption. 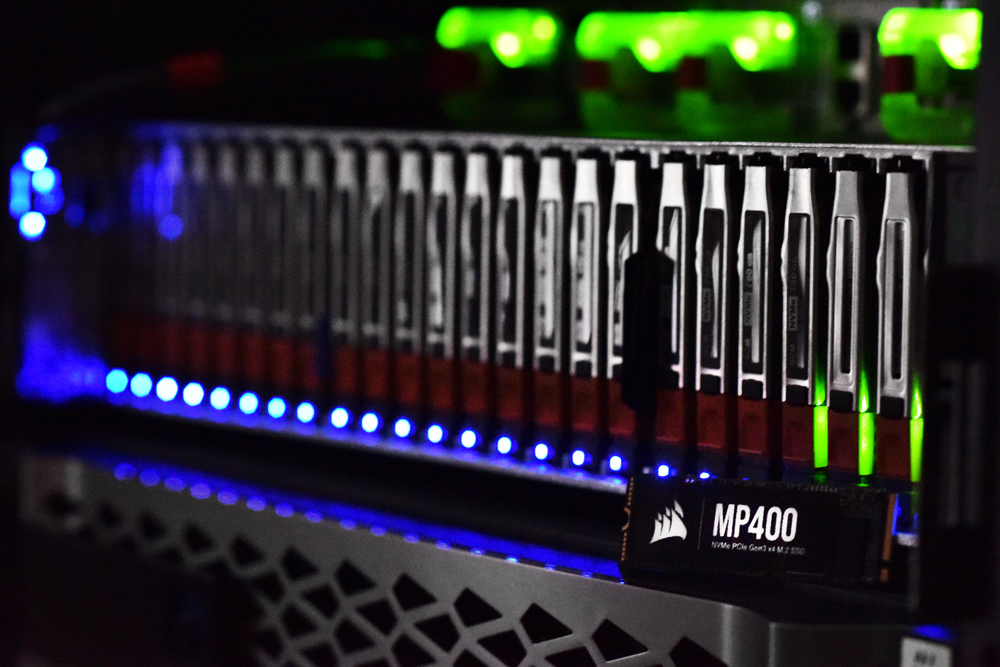 Ultimately, the biggest advantage of the MP400 is its application flexibility due to its wide range of high-capacity models. From consumers looking for an affordable, performance-driven drive to run on their operation system, to professionals who need a massive (yet pricey) capacity point for their workstation, the MP400 has them covered.

As far as its price tag goes, there’s a lot to like here as well. The 1TB and 2TB capacities go for $120 and $255, respectively, which is only about $15/$30 dollars more than the much slower (and much older) Crucial P1 QLC-based SSD. The Intel SSD is priced similarly as well, which the MP400 also handily beat in most of our tests. Coupling all this with its comprehensive 5-year warranty makes the MP400 a great release by Corsair.

How To: Raspberry Pi as a vSAN Witness