When it comes to small business and home lab IT decisions, sometimes thinking outside the box helps to create cost-effective and high-performance solutions. Crucial just released the new 4TB capacity of the long-standing MX500 SATA SSD, which may just be a perfect price and performance mix for a low-cost all-flash storage setup. We installed eight of these SSDs in one of our Dell EMC R740xd servers and measured performance using hardware RAID and Windows Storage Spaces.

When it comes to small business and home lab IT decisions, sometimes thinking outside the box helps to create cost-effective and high-performance solutions. Crucial just released the new 4TB capacity of the long-standing MX500 SATA SSD, which may just be a perfect price and performance mix for a low-cost all-flash storage setup. We installed eight of these SSDs in one of our Dell EMC R740xd servers and measured performance using hardware RAID and Windows Storage Spaces. 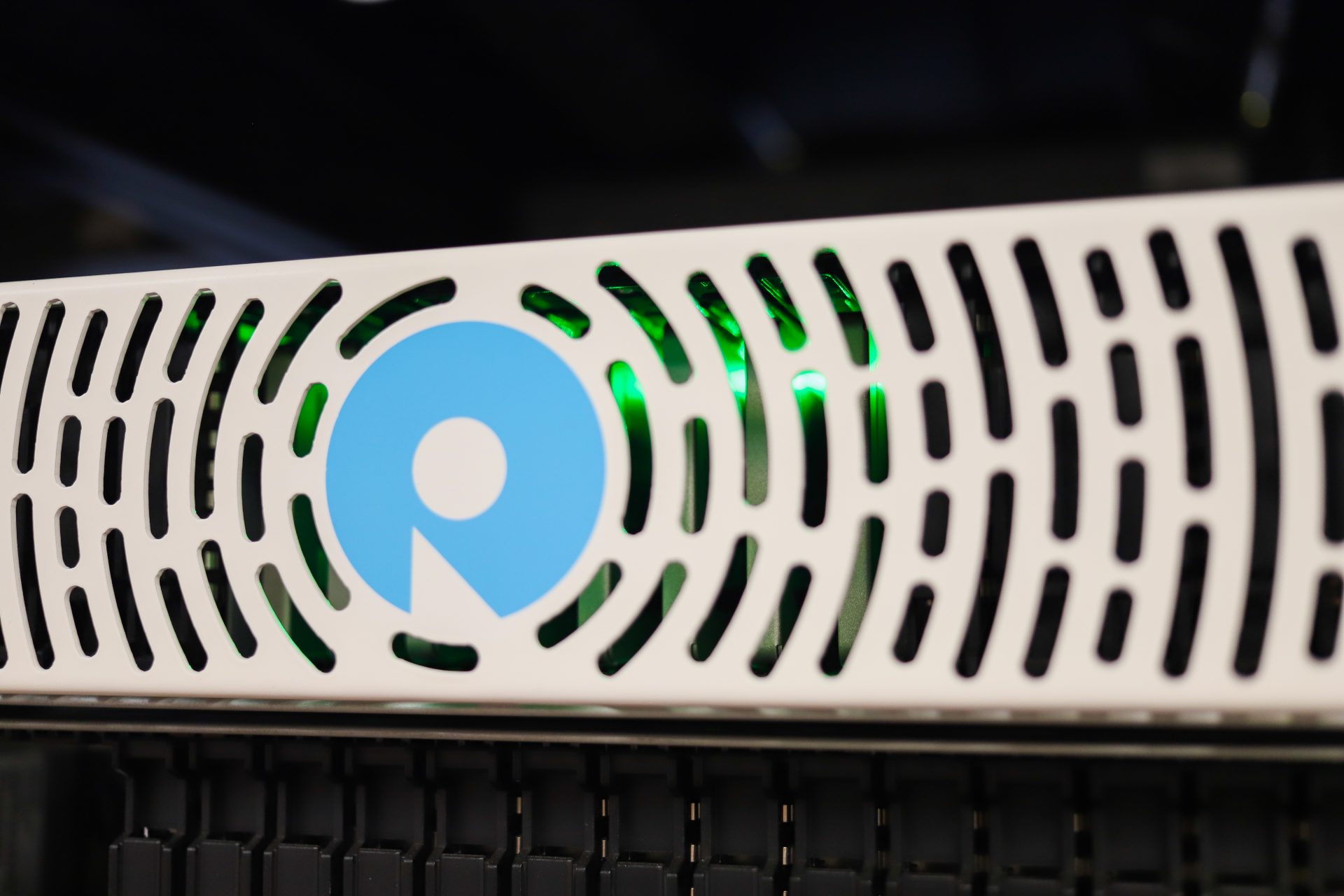 A simple way to improve server performance is to replace those slow hard disk drives (HDD) with high-capacity solid-state drives (SDD). SSDs can provide maximum performance at a lower cost than replacing existing servers, and Crucial Technology has an affordable solution to make the decision easier. 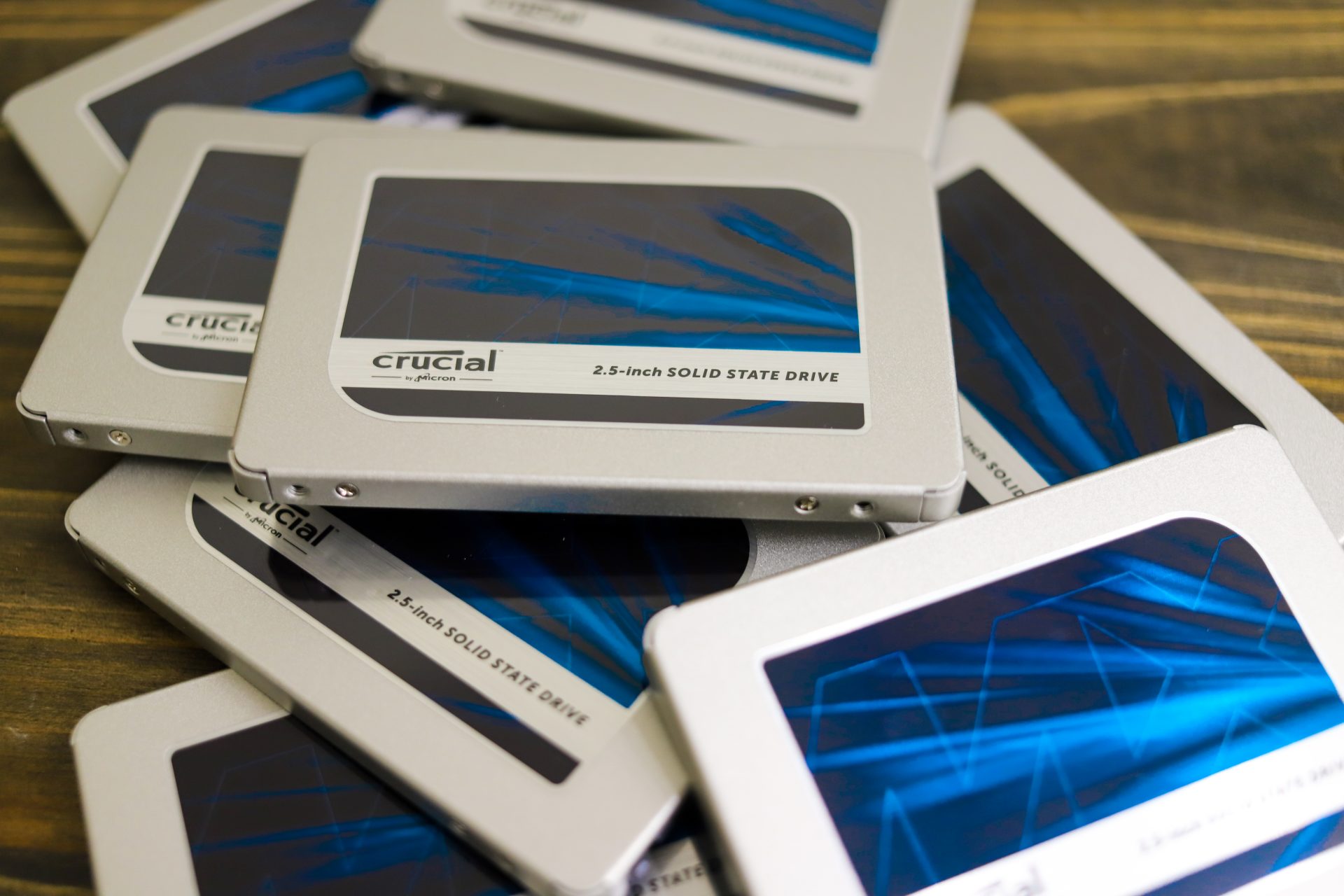 Crucial, part of Micron Technology, announced the MX500 SSD series in 2018, boasting capacities up to 2TB in a 2.5-inch and mSATA form factor. Recently, Crucial added a cost-effective 4TB drive to the MX500 line-up making this the perfect time to consider upgrading those spinning disks.

Why Flash at the Edge?

A lot of system integrators and SMBs on a budget still prefer to use hard drives. HDDs are pretty reliable, have high capacity, and have a low cost per TB. Hard drives have been around for years but have not kept up with the advancements in computing power when it comes to performance.

In a small business scenario or remote edge use case, there are other concerns. Hard drives are noisy, heat-generating, power-hungry devices susceptible to failure due to vibration, shock, and file corruption. For sites with limited IT personnel, maintenance can be a concern. But don’t discard those hard drives just yet. Hard drives are great for long-term data archiving, so consider repurposing those for backup.

Solid-state drives are available in a variety of architectures addressing speed and capacity. At the low end of the SSD spectra are SATA SSDs, typically considered budget solid-state storage components. However, the SATA technology has been around for 20+ years and still operates just fine in both new and older systems. In many respects, attempting to upgrade to anything faster than SATA would probably be overkill if the server or workload happens to be the bottleneck.

Solid-state drives can be a cost-effective alternative to replacing older servers. While going all Gen4 NVMe might drive some incredible performance, in many environments budgets just don’t exist for that kind of overhaul. While NVMe is taking over, SATA still can provide value. A typical 7200 RPM HDD can deliver read/write speeds of between 80 to 160MB/s compared to SATA SSDs delivering read/write speeds of 200 to 550MB/s. That is a massive performance boost for an aging system.

Speed and performance mean a higher price tag, so it’s essential to weigh the cost versus the need for added performance. For example, the Crucial MX500 SSD 4TB drive is priced around $349, while a Crucial 2TB P5 NVMe drive is just under $300. 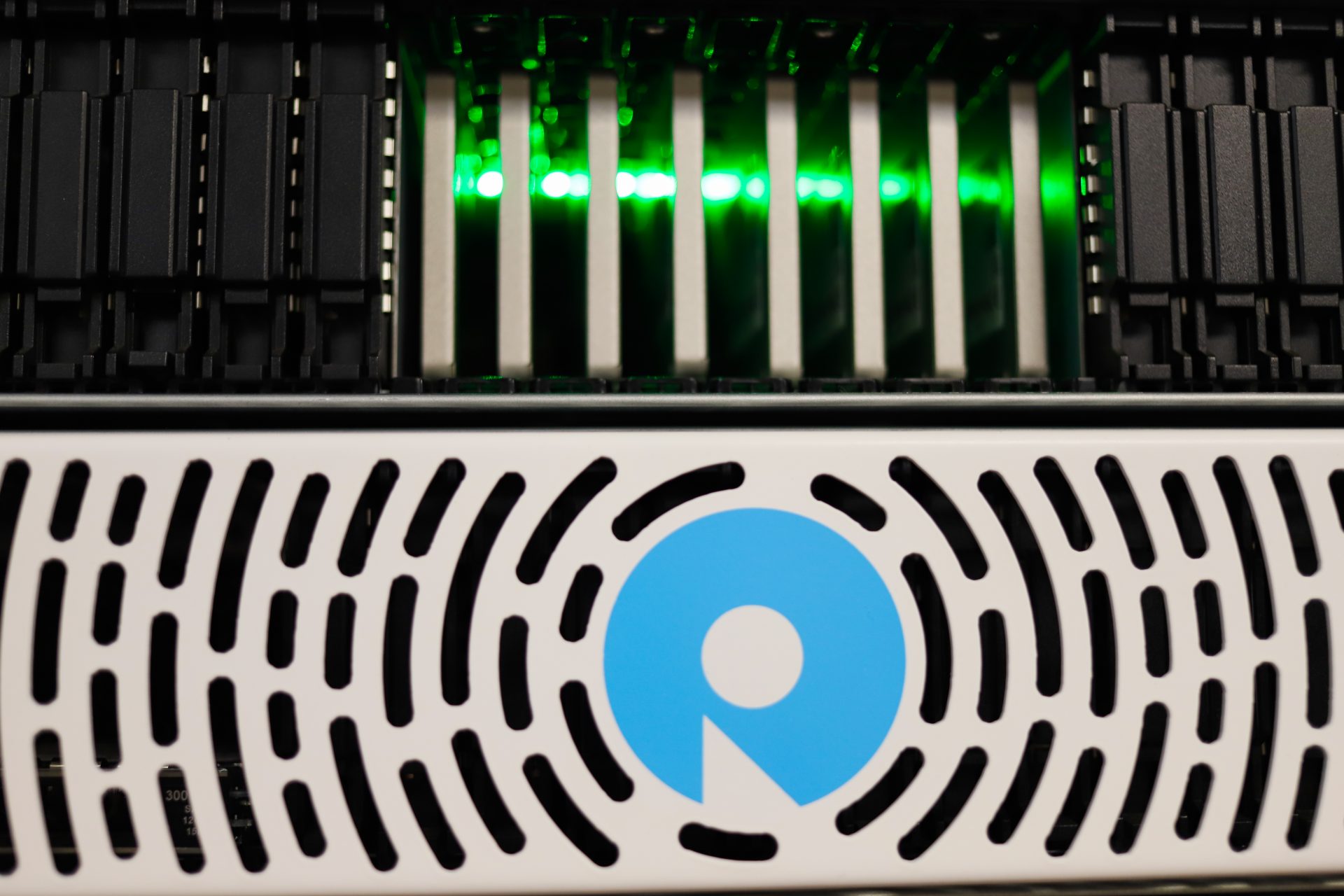 A significant benefit of solid-state drives is their durability, and they are not subject to damage caused by vibration or shock. However, they are susceptible to age and write limitations, although those factors continue to improve as technology evolves. SSD longevity is based on the overall endurance of the device. Most vendors will provide maximum associated writes for the solid-state drives, stated in maximum terabytes written (TBW).

In this case, the Crucial MX500 4TB SSD offers a 1,000 TBW, pretty reasonable for the task at hand. Crucial also backs the drive with a five-year warranty.

Our first test looks at peak throughput with a small-block 4K random workload. Comparing hardware RAID versus software RAID, there are some interesting strengths and weaknesses. First is software RAID offered much higher I/O performance for read, and in the case of RAID0, higher write performance as well. When leveraging parity data though, in RAID5, the hardware RAID card offered substantially higher throughput at 11k IOPS, versus 509 IOPS in Storage Spaces.

Looking at average read latency in our budget all-flash setup, across the board we had very low latency. We had sub-2ms latency in almost all areas, with SW RAID coming un below 1ms in a few areas. Write latency in RAID5 are the areas that stand out, with hardware RAID measuring in at just under 23ms and storage spaces with a hefty 503ms.

Max latency stayed pretty calm across the board, with most figures staying under 200ms. Storage Spaces software RAID had the highest figures, with write latency coming in under 1000ms in RAID0 and peaking at almost 1400ms in RAID5.

Again in standard deviation latency in our 4K profile, things are pretty calm across the board, where RAID5 software RAID is the standout. Parity data performance is an area where hardware RAID has had a massive benefit, so if you want to get the most out of your SATA or SAS flash, opting for that hardware RAID card would be a good option.

Moving to an 8K blocksize but a sequential data pattern, we see pretty consistent performance from the two hardware RAID configurations, which measure up to 146k IOPS read and 150k IOPS write in RAID0. Storage Spaces by comparison in RIAD0 came in at a higher 333k IOPS read and 298k IOPS write, but still couldn’t keep up with SW RAID5 read performance. While its read performance was strong, SW RAID5 had the lowest 8K sequential write speed though, at 23k IOPS.

Finally, as we look at bandwidth across our four configurations, we find the leaders all top out around 4GB/s. This is pretty good since if you look at this in terms of shared file storage (or scratch space with RAID0) you could easily saturate a 10Gb or 25Gb LAN connection. Write performance on both HW and SW RAID0 configurations came in around 3.2GB/s, while HW RAID5 dropped to 2GB/s. Software RAID5 took the biggest read and write hit, coming in at under 1GB/s read and 272MB/s write.

In a true enterprise application, it’s a bit silly to even consider SATA SSDs. Even though the very first enterprise all-flash arrays used client SATA SSDs, the market has moved quickly. Gen4 NVMe SSDs provide an order of magnitude more performance and PCIe Gen5 SSDs will blow away today’s standard as early as next year. That said, there are many use cases when the cost is critical, along with the inherent benefits SSDs provide over HDD-based systems. Any small office that needs a quick file server that also needs to be quiet because it sits in an open space can benefit from flash. 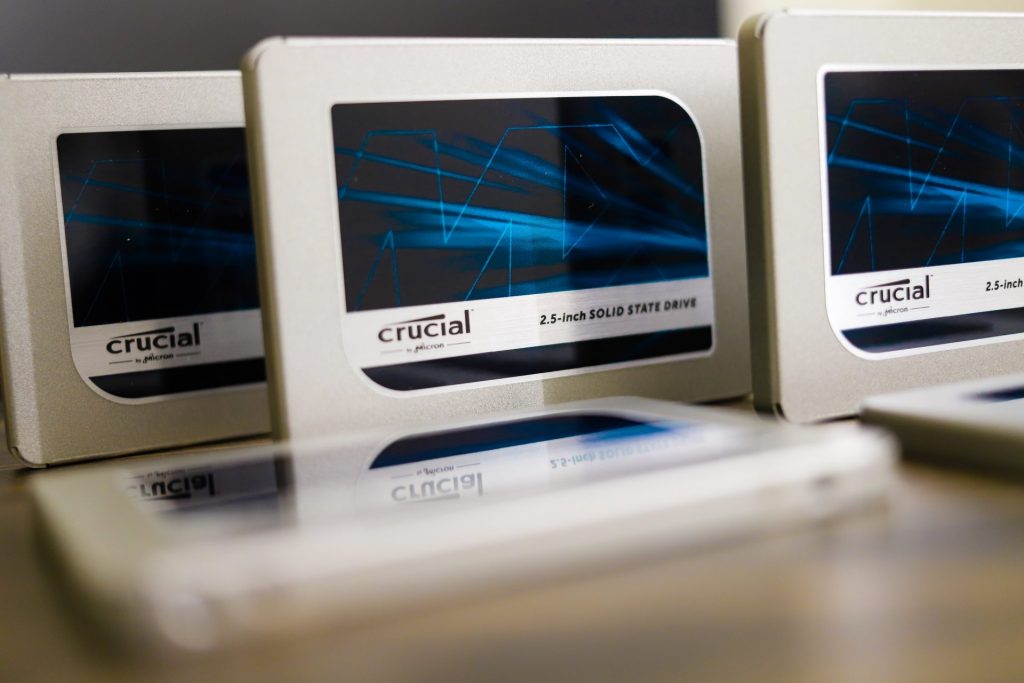 As such, we took eight of Crucials’ newly launched MX500 in the 2.5″ 4TB form factor and put them in an R740xd to see what can be done. We checkout out both hardware RAID via Dell’s card, and software RAID via Windows Storage Spaces. Overall the results are pretty strong when you look at it as unmodified drives in a pretty intensive workload barrage.

We didn’t adjust over-provisioning levels, and from each RAID group, we tested a 1TB footprint of storage. Manually over-provisioning the drives before going into their respective RAID configurations would yield higher and more consistent write performance, and help with endurance long term. While the focus of this isn’t saying that consumer SSDs will replace enterprise SSDs, it is showing that you can achieve some impressive results on a smaller budget.