The Dell OptiPlex 7000 Micro is a business desktop small enough to mount behind a monitor or under a desk yet packs a good punch for everyday use, thanks to Intel’s 12th generation “Alder Lake” Core processors, 64GB of RAM, and two Gen4 NVMe storage drives. It’s a viable small-form-factor option for office, retail, and anywhere space is at a premium.

The Dell OptiPlex 7000 Micro is a business desktop small enough to mount behind a monitor or under a desk yet packs a good punch for everyday use, thanks to Intel’s 12th generation “Alder Lake” Core processors, 64GB of RAM, and two Gen4 NVMe storage drives. It’s a viable small-form-factor option for office, retail, and anywhere space is at a premium.

The OptiPlex 7000 Micro is Dell’s smallest business desktop PC. It fits where traditional desktops don’t, making it an excellent option for retail and other space-constrained environments. We’ll look more at its design in the next section.

This mini-desktop is based on Intel “Alder Lake” Core-class processors with either a 35-or a 65-watt base power rating. As such, the OptiPlex 7000 Micro won’t be a monster performer like desktops equipped with 125-watt K-class chips, but it will easily handle everyday tasks. (See our Core i9-12900K review for an Alder Lake primer.)

The top CPU is the 16-core Core i9-12900, which has a 2.4GHz base clock and a 5.1GHz Turbo. Compare that to the 35-watt Core i9-12900T, with its lower 1.4GHz base but still impressive 4.9GHz turbo. 35-watt configurations use DDR4 RAM while 65-watt models jump to DDR5; 64GB is the maximum supported either way. This desktop also supports two Gen4 storage drives with either CPU class.

Most of the CPUs offered in the OptiPlex 7000 Micro are Intel vPro capable. This business platform offers remote management and security features not found in consumer PCs. The OptiPlex 7000 Micro specifically offers vPro Enterprise, the highest tier of vPro, which includes Intel Active Management Technology. 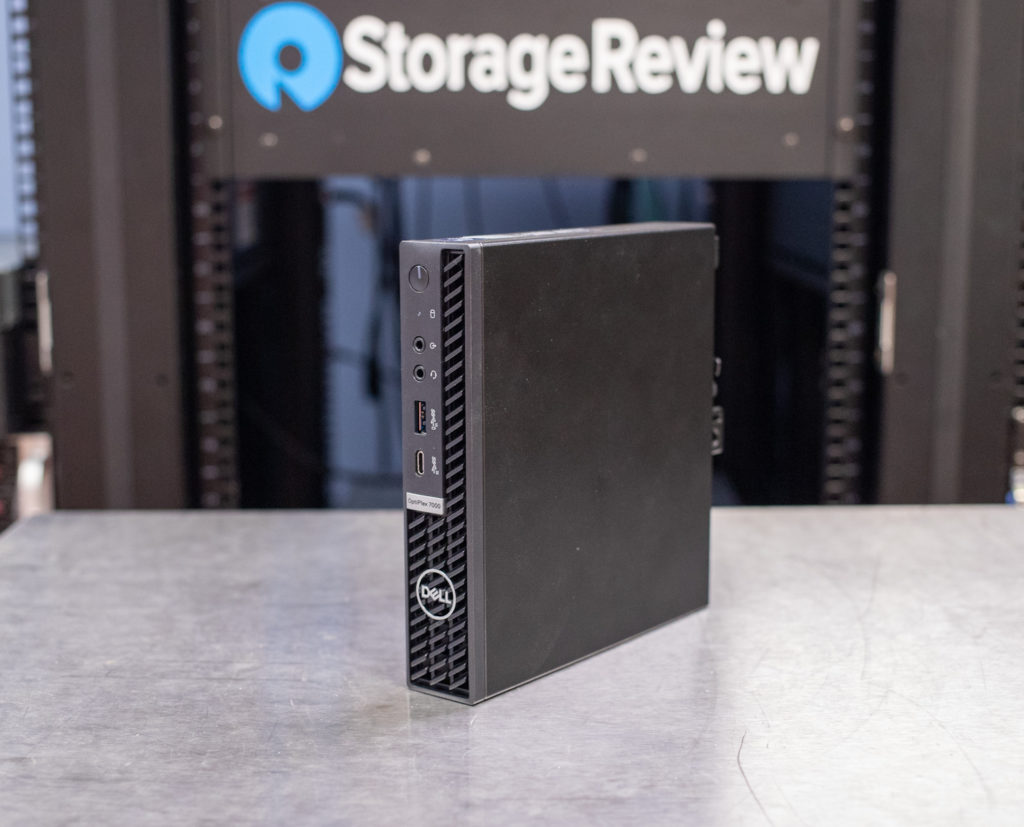 Something for which the OptiPlex 7000 Micro is not suited is running VMWare; its built-in Intel Ethernet card is not officially supported. Even if it was, Alder Lake CPUs that sport a mix of Performance- and Efficient cores – namely, the Core i7 and i9 – would still present a compatibility issue. (Fortunately, the Core i5 chips offered in this tower lack E-cores.)

The OptiPlex Micro 7000’s full specifications are as follows:

Micro is an understatement describing the OptiPlex 7000 Micro – it’s barely wider than an SD card. It’s Dell’s smallest business desktop at just 7.2 by 1.4 by 7 inches (HWD) and a mere 2.1 pounds. 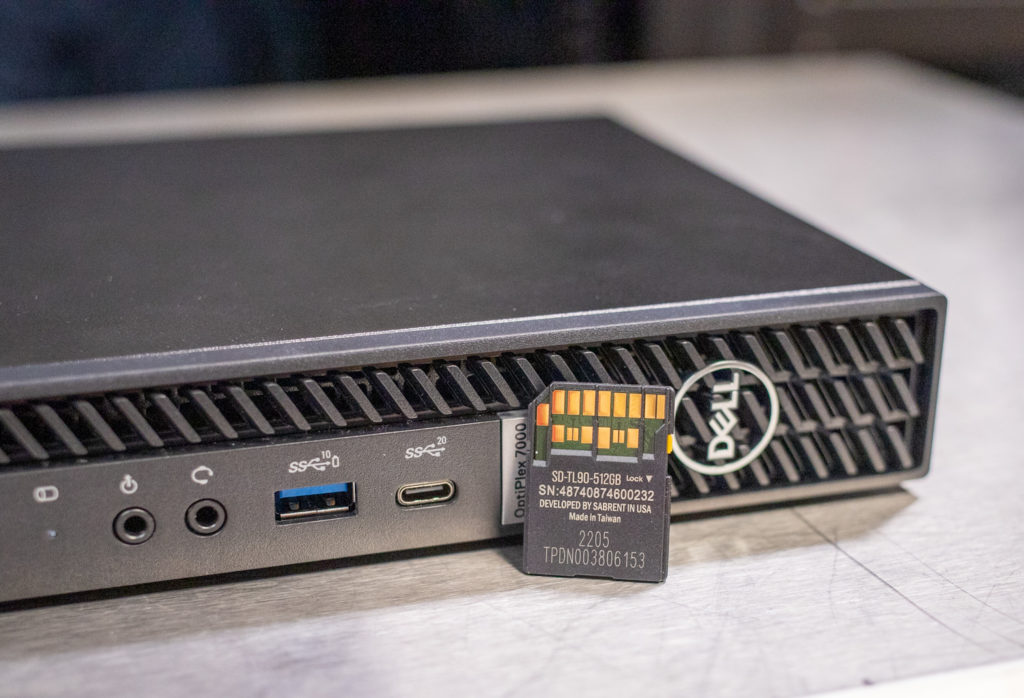 It can sit on a desk upright or horizontal. In addition, Dell offers a VESA mount so it can hide behind a monitor, an under-desk mount, and even an “all-in-one” stand which has a caddy for the desktop and a VESA mount for a monitor. The OptiPlex 7000 Micro is so small that it doesn’t have an internal power supply, resorting to an external laptop-style adapter. Fortunately, Dell offers a sleeve that lets you mount it out of the way.

Front-panel selection includes one USB-A 3.2 Gen2 (10Gbps) port, one USB-C 3.2 Gen2x2 (20Gbps) port, a line-in/line-out audio jack, and a universal audio jack (headphone/microphone). The USB-C port doesn’t offer the bandwidth of a Thunderbolt 4 port but is plenty fast for this desktop’s intended usage. The power button and a drive activity light are also present. There’s no media card reader. 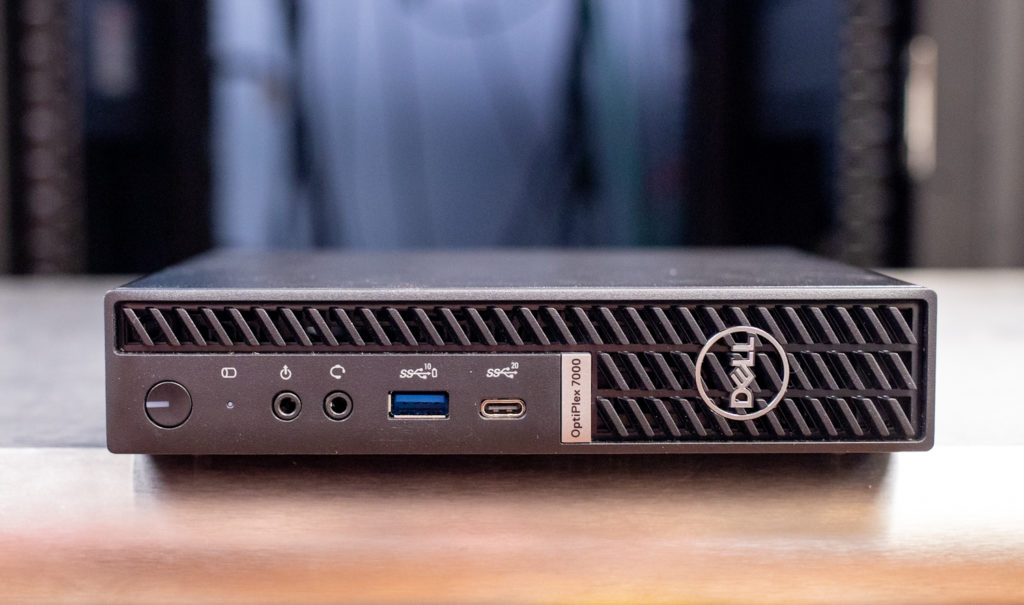 The backplane of our 65-watt model has three USB-A 3.2 Gen2 ports, three DisplayPort video outputs, and Ethernet. The plastic piece at the right is the optional wireless card’s antenna; also note the DC cable clip above the USB ports. Security features include a Kensington lock slot and a padlock ring. It also has a chassis intrusion switch. 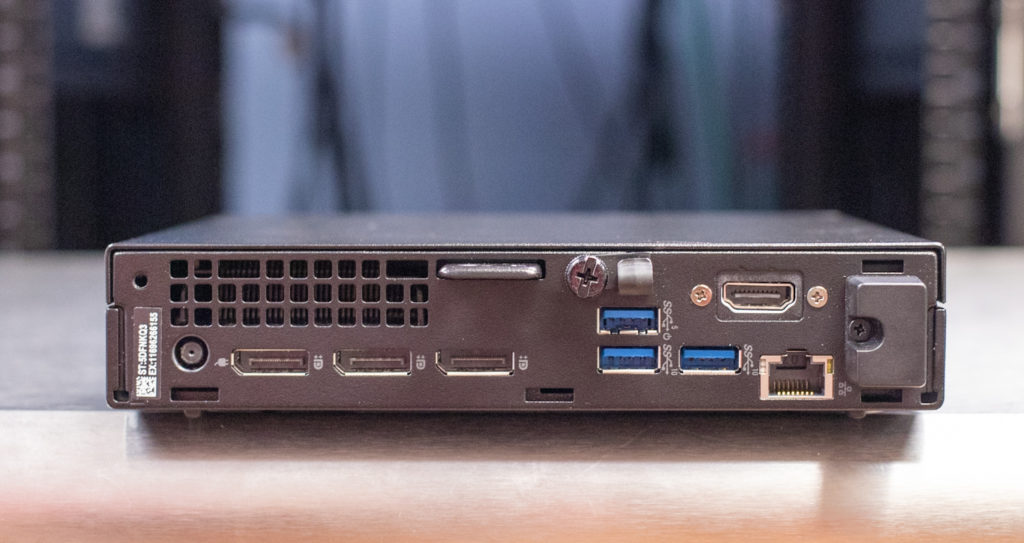 Our unit has an optional HDMI 2.0b port; the slot could alternatively hold a Serial, PS/2, VGA, DisplayPort, or another USB-C port. Equipped as we have it, the OptiPlex 7000 Micro supports four [email protected] monitors. It could support one [email protected] monitor if DisplayPort or USB-C (which supports DisplayPort over USB-C) are in the optional port. Configurations with a 35-watt CPU have one less built-in DisplayPort connector, reducing the maximum external monitor support to three. However, the 35-watt configurations get an extra USB-A port (for a total of four). We have videos on Instagram or YouTube with more depth on the video config.

Servicing the OptiPlex 7000 Micro is simple; the top panel releases after removing a thumbscrew. 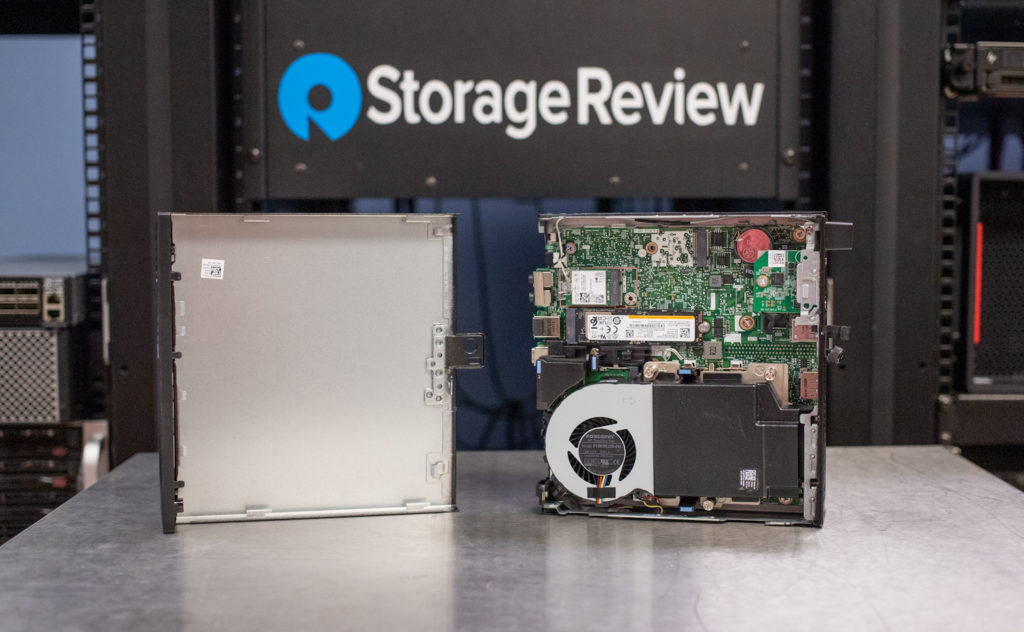 Below you can see the CPU fan and shroud removed – it comes off without tools, like most everything else inside. Under it are the aluminum CPU heatsink and the two So-DIMM slots. 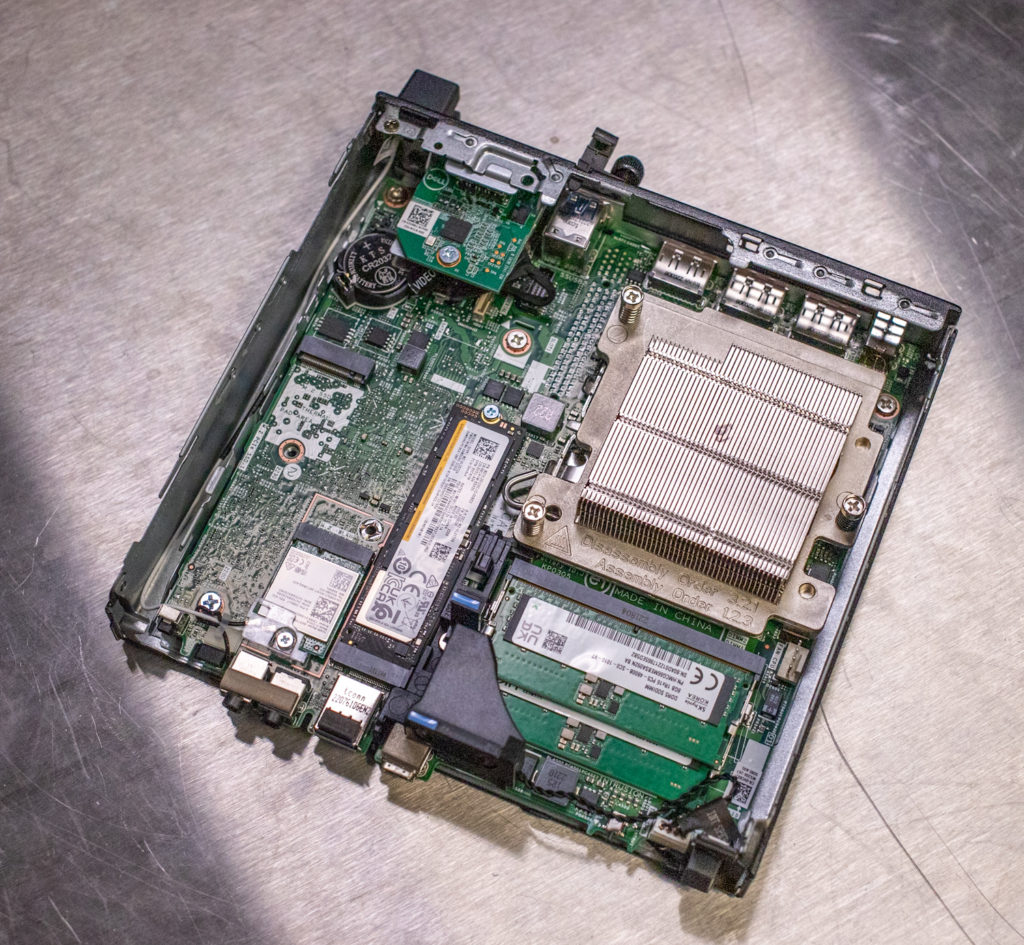 The other side has two M.2 2280 Gen4 slots for storage drives. The M.2 2230 slot between them has the optional Intel AX211 wireless card in our unit. I would have liked to have seen a heatsink on the M.2 storage drive. Shown below, the M.2-like device at the top left is the optional HDMI port. 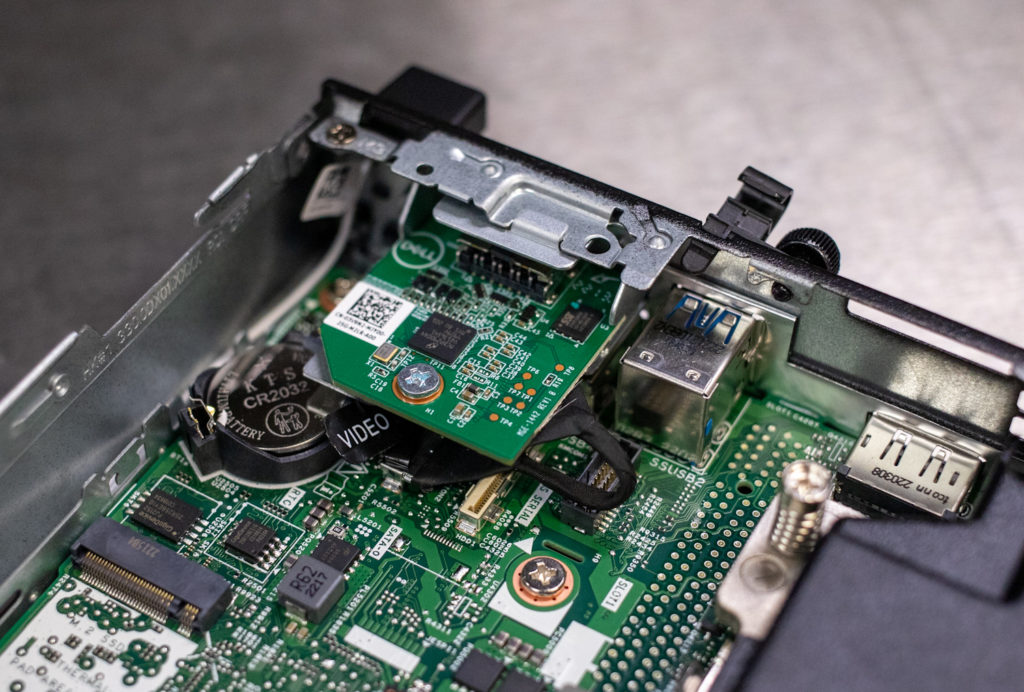 With the lid popped off, you can see a lot of that heat is captured by the heatsink and forced out the rear exhaust vent. With the 12900K CPU being available as one step above the 12700K, we do expect that version to run slightly hotter. With the cooling system being larger in this system than that of a notebook there really shouldn’t be a concern. 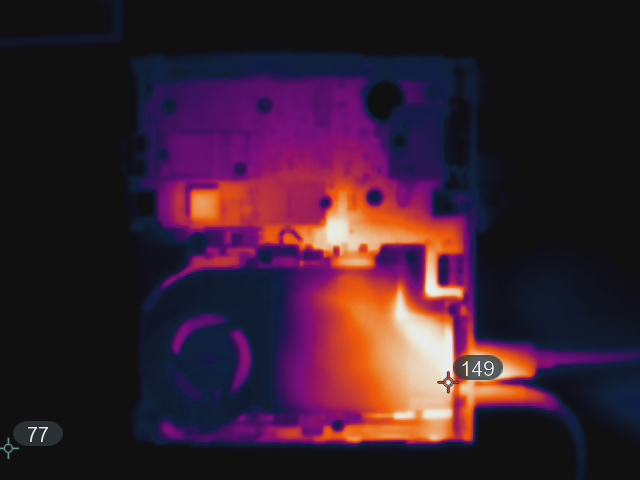 Our review unit is configured as follows:

This upper-level configuration went for $1,404 direct from Dell at review time. It’s well-balanced for general productivity. The maximum configuration is a 16-core Core i9-12900, 64GB of RAM, and a 2TB Gen4 storage drive. It supports a second SSD, though it doesn’t offer dedicated graphics.

For competition, the OptiPlex 7000 Micro faces the HP Elite Mini 600 G9 and the Lenovo ThinkCentre M80q.  They’re nearly the same size as the Dell (to within tenths of an inch) and offer similar processing power, expansion, ports, and Intel vPro Enterprise. Unlike Dell, they notably accept a 2.5-inch drive in addition to their two M.2 slots, but the Dell is the only one that officially lists Linux as a supported operating system.

Although far from apples-to-apples comparable, the OptiPlex 7000 Micro will face the HP Z2 Mini G9 mini-workstation in our testing, being one of the only other mini-PCs we’ve tested.

First up is SPECworkstation 3, which is a specialized test designed for benchmarking the key aspects of workstation performance by using over 30 workloads to test CPU, graphics, I/O, and memory bandwidth. The workloads fall into seven broad categories: Media and Entertainment, Product Development, Life Sciences, Energy, Financial Services, General Operations, and GPU Compute. We listed the broad-category results which represent an average for all the individual workloads in each category.

The OptiPlex 7000 Micro is the slower of the two, of course, but it still produced decent numbers. It didn’t complete the GPU Compute test; its integrated graphics just aren’t designed for that workload. The HP also didn’t complete that test, but likely for different reasons.

The excellent 7-Zip file archive tool has a handy built-in compression benchmark. We ran 10 passes using a 128MB dictionary size. Higher numbers are better. The HP continued to dominate, but the OptiPlex 7000 Micro held its own.

Our last test is the popular SiSoftware Sandra 2021 suite. Higher numbers are better in all subtests. I only have numbers for the OptiPlex 7000 Micro since this test has only recently been added to our benchmarking regimen. Its memory bandwidth isn’t impressive, but its cache & memory latency and cache & memory bandwidth are acceptable for DDR5 So-DIMMs.

The Dell OptiPlex 7000 Micro is a tiny yet feature-packed desktop. Dell’s versatile mounting options allow it to fit almost anywhere, including behind a monitor or under a desk. Performance, serviceability, and security also impress, with a 12th generation Intel Core processor up to 65 watts, 64GB of memory, and two Gen4 SSDs, and Intel vPro Enterprise support.

We also like that Linux is a factory option. This little desktop even supports up to four 4K monitors despite lacking dedicated graphics. All told, the OptiPlex 7000 Micro has a lot to offer in its compact chassis and earns our “Best of 2022” award for mini business desktop PCs.