The Precision 5550 is Dell’s latest addition to the premium line of mobile workstations. The 5550 (which is the 15-inch model of the 5000 series) is powered by (up to) a 10th Gen Intel Core or Xeon vPro processors, has a 4K display, and NVIDIA Quadro professional graphics. Dell’s mobile workstation is meant for businesses or professionals that need a portable, performance-driven solution as well as with manageability and security features. It’s ideal for those who use resource-intensive software like CAD and Adobe Creative Cloud Suite.

The Precision 5550 is Dell’s latest addition to the premium line of mobile workstations. The 5550 (which is the 15-inch model of the 5000 series) is powered by (up to) a 10th Gen Intel Core or Xeon vPro processors, has a 4K display, and NVIDIA Quadro professional graphics. Dell’s mobile workstation is meant for businesses or professionals that need a portable, performance-driven solution as well as with manageability and security features. It’s ideal for those who use resource-intensive software like CAD and Adobe Creative Cloud Suite. 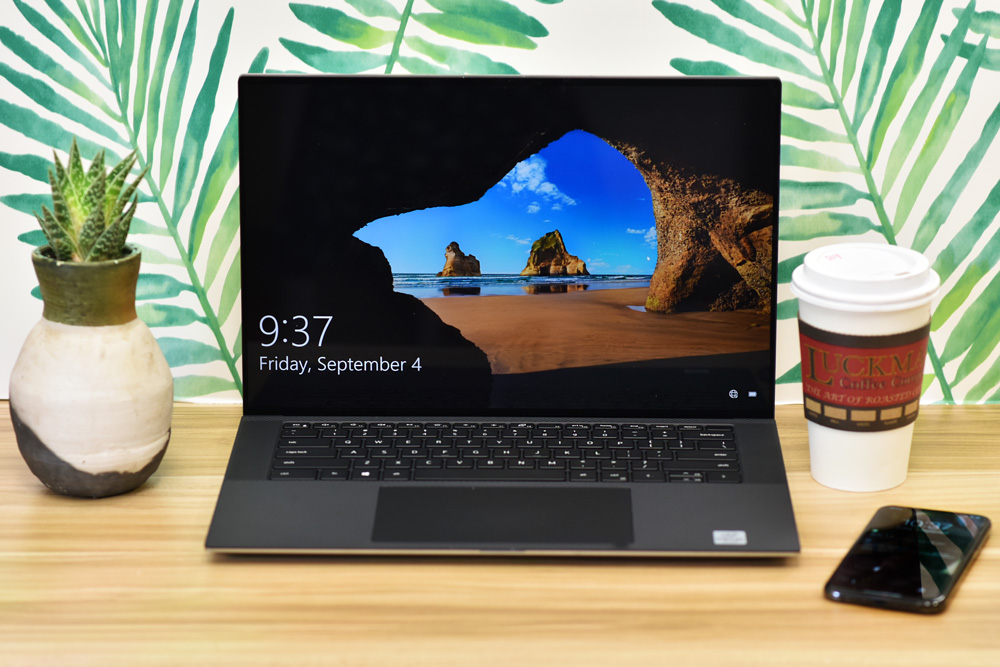 Like all Precision models, the 5550 can be customized with both entry-level and high-end components, allowing it to fit a range of different budgets. Though it isn’t the most powerful workstation, the 5550 can still be well-equipped to handle most needs.

The low-ender components include an Intel Core Processor i5-10400H, onboard Intel UHD 630 graphics, 8GB of DDR4 RAM, and smaller capacity/class SSDs. Budget-friendly builds like these can reach low as $1,600. Users also have the option between Windows Home edition or the Pro version, as well as the choice between UltraSharp FHD+ 1920×1200 or UHD+ HDR400 3840×2400 touch displays.

Those on the go will find Dell’s ExpressCharge feature very useful. This technology leverages AI to increase battery performance by adapting to users’ power consumption and charge patterns. With ExpressCharge Boost, Dell claims that you will get an extra 35% charge in roughly 20 minutes, while an hour will automatically give 80%. Those who don’t have time for charging will still be able to see improvements, as it will automatically adjust settings to help increase battery life, including dimming screens and turning off Bluetooth when it’s not being used.

One of the biggest highlights of the 5550 is heat management technology, as Dell seems pretty excited when describing its capabilities. Its advanced thermal designs include dual fans and dual heat pipes to hidden exhaust hot air through the hinge, helping to keep the mobile workstation running cool and quietly during intensive workloads.

At under a half-inch thick for the base, and just over 13 inches in width, the Precision 5550 is a very thin mobile workstation, as Dell indicates a 6% reduction in size compared to the previous generation. It’s also fairly light for a mid-range, performance-driven mobile workstation, starting at just a hair over 4 pounds. It won’t get too much heavier when adding other components, so it’s certainly a great option for professionals on the go.

The quality of the build is what you usually expect from the Precision line, featuring a slick-looking aluminum, “titan gray” design. It’s not a bulky workstation by any means, but it still has a pretty strong chassis feel to it. The surface area around the keyboard and trackpad is smooth but with a textured look. 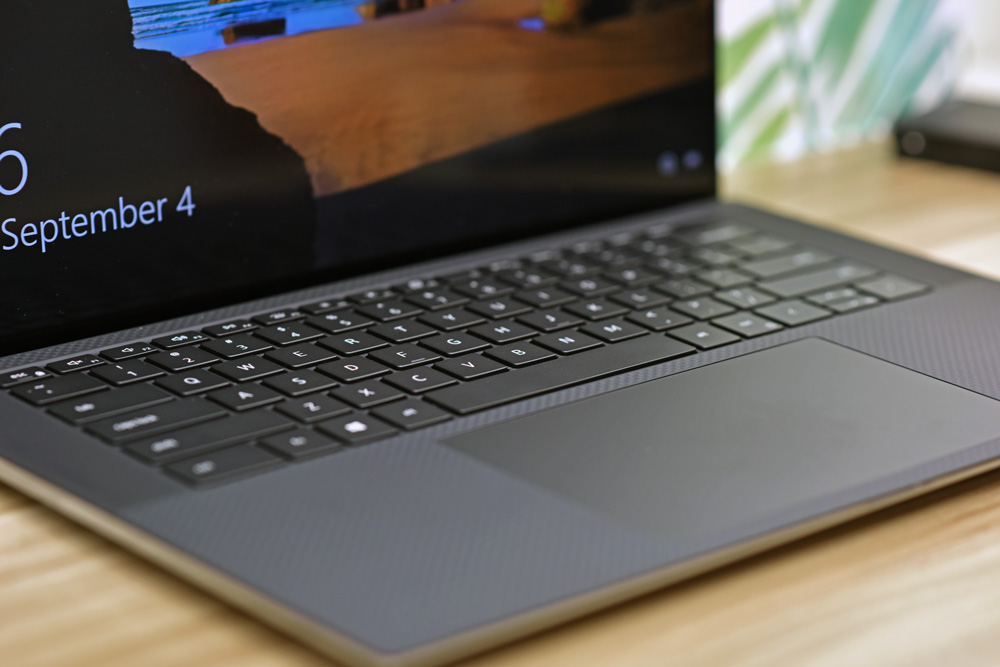 The trackpad is larger than most workstations we’ve seen. Though some people might enjoy the extra space, those who are used to desktop keyboards will likely find it a bit jarring and awkward, as you have to reach over the trackpad to type.

As far as the display goes, Dell has put a noticeable focus on a comfortable viewing experience with 5550. It features a 92% display-to-body for a modern look and easy viewing. You can also choose to use the optional TUV-certified low blue light panels, which helps to reduce eye strain. In addition, we noticed that the screen resolution is taller than most, its vertical height is x2400 versus the x2160 resolution that most 4K panels use. This extra real estate was certainly noticeable (and appreciated) during our usage.

All the connectivity is located on the sides of the Precision workstation. On the left are the USB 3.2 Gen 2 Type-C, an SD card slot, and a universal audio port. On the right is the lock slot and two USB 3.2 Gen 2 Type-C port with Thunderbolt 3 ports. All three USB ports can be used to power the 5550, which makes it very useful for cord management when you want to change up where you set up the workstation. 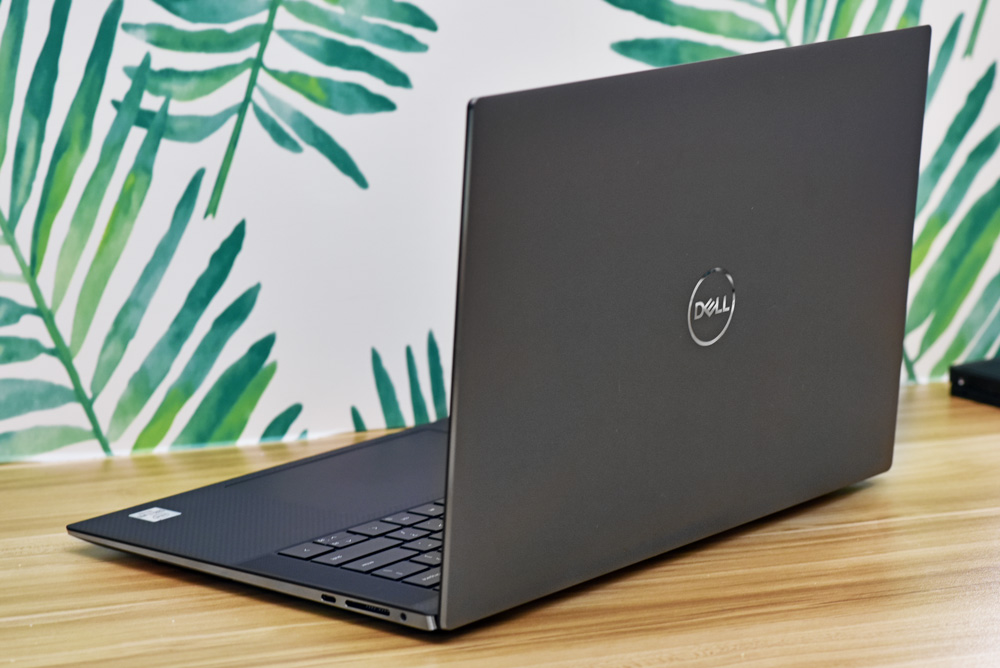 We outfitted the 5550 with an NVIDIA Quadro T2000, a lower to mid-range professional graphics card that features 4GB GDDR6 GPU memory, 1,024 processing cores, and 128 Gbps in memory bandwidth.

To gauge its performance, we put the Precision 5550 mobile workstation through four resource-intensive tests, allowing us to see what this system can do when outfitted with an Intel Core Processor i7-10875H, an NVIDIA Quadro T2000 (4GB GDDR6 GPU), 32GB of DDR4 RAM, and one M.2 1TB PCIe NVMe Class 50 SSD. We also compared it to the Dell Precision 7740, a higher-class model (though older) from the Precision family, which is equipped with a 9th Gen Intel Core i9-9980HK CPU, NVIDIA Quadro RTX 5000 (16GB GDDR6 GPU),  32GB non-ECC RAM, and 512GB M.2 NVMe PCIe Class 50 SSD storage. The biggest difference here is the GPU, which certainly shows in the results. We just wanted to demonstrate the difference between higher-end and mid-class Precision models so you can get an idea of what is best suited for your needs.

The Precision 5550 showed good results for its class (overall score of 5,326), including essentials (9,369), productivity (7,514), and digital content (5,826). It did get a little bogged down in the latter score, specifically in the ray-tracing area (as expected) and some of the video editing, which is certainly due to the limitations of the graphics card. 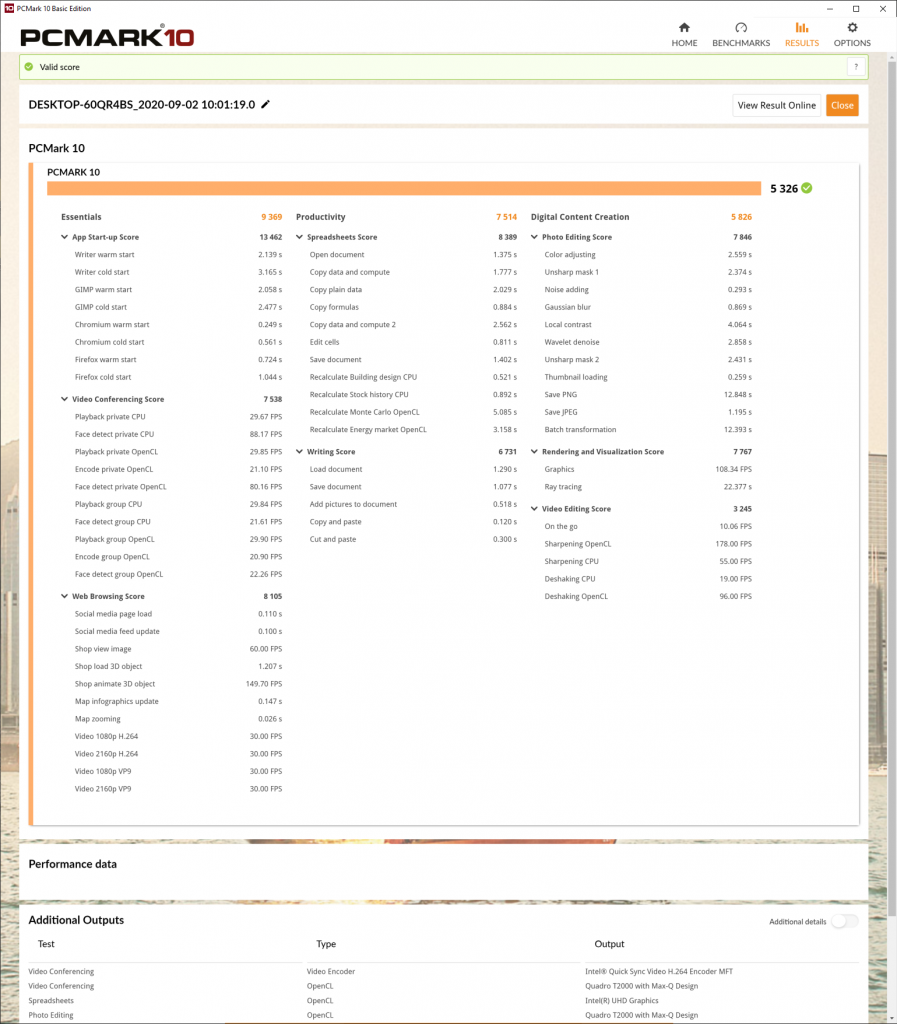 The next test is the SPECviewperf 13 benchmark, the worldwide standard for measuring graphics performance based on professional applications. SPECviewperf runs 9 benchmarks called “viewsets,” which represent graphics content and behavior from actual applications and include categories such as 3D Max, CATIA, Creo, Energy, Maya, Medical, Showcase, Siemens NX, and Solidworks.

As you can see, the higher-end Precision 7740 scored roughly twice as good (with some exceptions like Solidworks where it was much closer). Overall though, the Precision 5550 demonstrated solid results for its class.

We also ran SPECworkstation3, a test that is designed for testing all key aspects of workstation performance; it uses over 30 workloads to test CPU, graphics, I/O, and memory bandwidth. The workloads fall into broader categories such as Media and Entertainment, Financial Services, Product Development, Energy, Life Sciences, and General Operations. We are going to list the broad-category results for each, as opposed to the individual workloads. The results are an average of all the individual workloads in each category.

In the SPECworkstation3 test, results were much closer to the 7740 numbers with the exception of (unsurprisingly) the GPU Computer category, as the RTX 5000 is a vastly superior graphics card with quadruple the amount of memory (16GB vs 4GB).

Next up is the Environmental Systems Research Institute (Esri) benchmark. Esri is a supplier of Geographic Information System (GIS) software. Esri’s Performance Team designed their PerfTool add-in scripts to automatically launch the ArcGIS Pro. This application uses a “ZoomToBookmarks” function to browse various pre-defined bookmarks and create a log file with all the key data points required to predict the user experience. The script automatically loops the bookmarks three times to account for caching (memory and disk cache). In other words, this benchmark simulates heavy graphical use that one might see through Esri’s ArcGIS Pro software. The tests consist of three main datasets. Two are 3-D city views of Philadelphia, PA, and Montreal, QC. These city views contain textured 3-D multipatch buildings draped on a terrain model and draped aerial images. The third dataset is a 2-D map view of the Portland, OR region. This data contains detailed information for roads, land use parcels, parks and schools, rivers, lakes, and hill shaded terrain.

The Precision 5550 is a lightweight mobile workstation that boasts solid performance for its class. Though available components aren’t as powerful as some of the other Precision lines, you can still outfit the 5550 to create a decent mid-class mobile workstation experience that can easily run resource-intensive professional software. This includes a half-dozen 10th gen intel CPUs such as an i9-10885H (8 Core, 16MB Cache, up to 5.30GHz Turbo) up to 64 GB DDR4 2933 MHz ECC SDRAM, two 2TB NVMe SSDs, and a beautiful 15.6-inch UHD+ 4K (3840 x 2400) display. There are only a few graphics card options (two onboard Intel options and NVIDIA Quadro T1000/T2000); however, this is normal for workstations of this class, as some only have a single option to choose from. That said, top builds cost just over $4,000 such as our review model, which seems to be a reasonable price these days.

To gauge the overall performance of the Precision 5550 in both resource-intensive and casual workloads, we put it through a gauntlet of different benchmarks starting with the PCMark10 benchmark. This is a Windows PC test that focuses on modern office tasks. Here, the 5550 recorded 9,369 in essentials and 7,514 in productivity and 5,326 in digital content. The last score suffered a bit in the ray-tracing area (expected) and some of the video editing due to the limitations of its graphics card. The overall score of 5,326 was pretty solid and expected. In our SPECworkstation3 test, which specializes in benchmarks designed for testing all key aspects of the system including CPU, graphics, I/O, and memory bandwidth, the 5550 showed solid results.

Though users can’t outfit the Precision 5550 with components some of Dell’s higher-end models offer (and boast the top-class performance that comes with it), this mobile workstation showed the results we expected. It demonstrated that it was able to handle itself well enough in our performance tests, checking all the right boxes for its intended use case. The Precision 5550 is also an exceptionally portable device (a hair over 4 pounds), which is often something that takes precedence over performance for many professionals.