Dell’s Precision 7560 is its most powerful 15.6-inch mobile workstation. This model’s component loadout includes Intel’s 11th generation Xeon and Core processors, NVIDIA workstation-grade GPUs up to the 16GB RTX A5000, up to 128GB of ECC memory, and space for three NVMe drives. Its top screen option sports a UHD (3840×2160) resolution and a 100% Adobe RGB color rating.

Dell’s Precision 7560 is its most powerful 15.6-inch mobile workstation. This model’s component loadout includes Intel’s 11th generation Xeon and Core processors, NVIDIA workstation-grade GPUs up to the 16GB RTX A5000, up to 128GB of ECC memory, and space for three NVMe drives. Its top screen option sports a UHD (3840×2160) resolution and a 100% Adobe RGB color rating.

The 7560 also has top-notch security options; Windows, Ubuntu, and Red Hat operating systems options; and a standard three-year warranty. Overall, the Precision 7560 is a worthy alternative to its chief rivals, the Lenovo ThinkPad P15 Gen 2 and the HP ZBook Fury 15 G8. It won’t be cheap even if you have access to corporate or fleet discounts, but if you’re looking for the most performance you can get in a 15.6-inch form factor, the Precision 7560 won’t steer you wrong.

Let’s check the Precision 7560’s stats. (Skip to the end of this section for the condensed version.)

The Precision 7560 offers nearly the same selection of processors, graphics cards, memory, and storage options as the HP ZBook Fury 15 G8 and the Lenovo ThinkPad P15 Gen 2. The HP has one more M.2 slot (for a total of four) and is the only one that offers AMD Radeon Pro cards and a privacy screen.

Meanwhile, Lenovo is the only one to offer a display with active pen input. The Precision 7560’s niche advantage is offering slightly faster DDR4-3466 non-ECC memory than the usual DDR4-3200. Overall, however, the on-paper differences between the three are slight; this is a highly competitive field, one in which these three have been competing for many years.

True to a top-end business laptop, the Precision 7560 has a metal construction and a tank-like feel. Though not a rugged laptop, it’s designed for travel and can withstand not being treated like royalty. 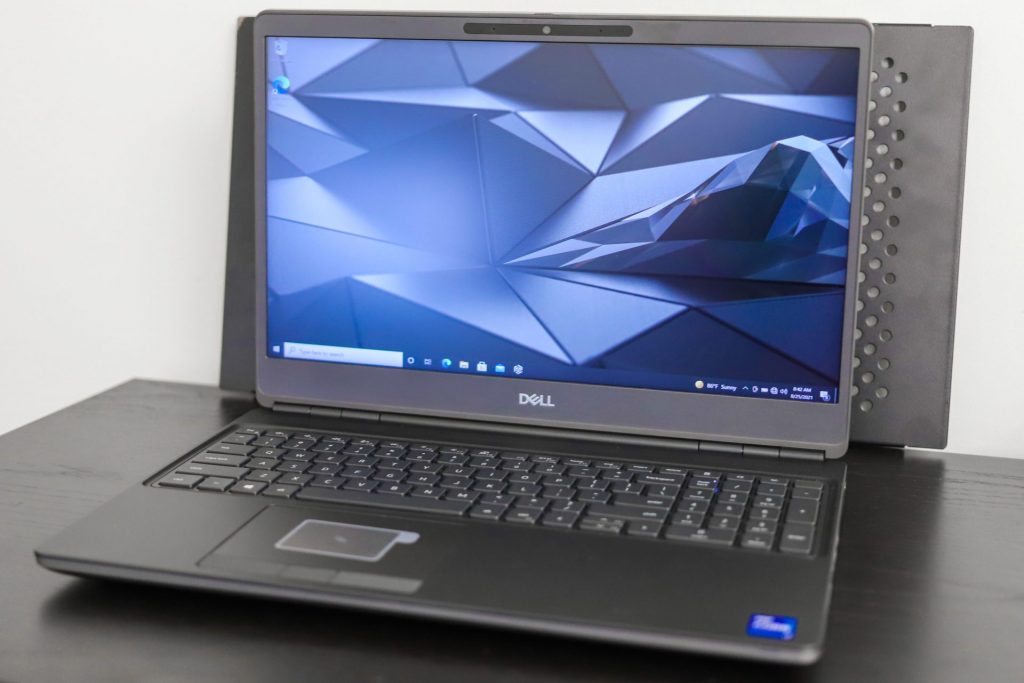 The design is professional without being overly sterile. Its silver edges and lid contrast nicely with its black palm rest. 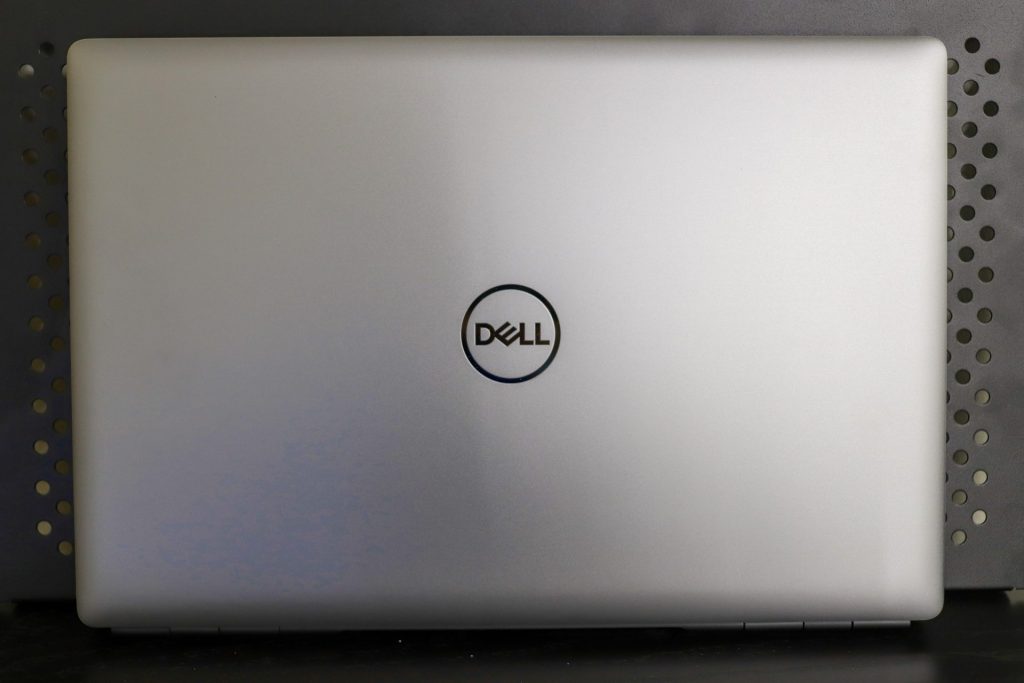 The Precision 7560 is 14.17 inches wide, 9.53 inches deep, and varies in height from 0.98 inches at the front to 1.08 inches at the rear. It’s relatively chunky next to a typical consumer 15.6-inch laptop, but this is a powerful workstation, and its dimensions and starting weight of 5.42 pounds are acceptable. 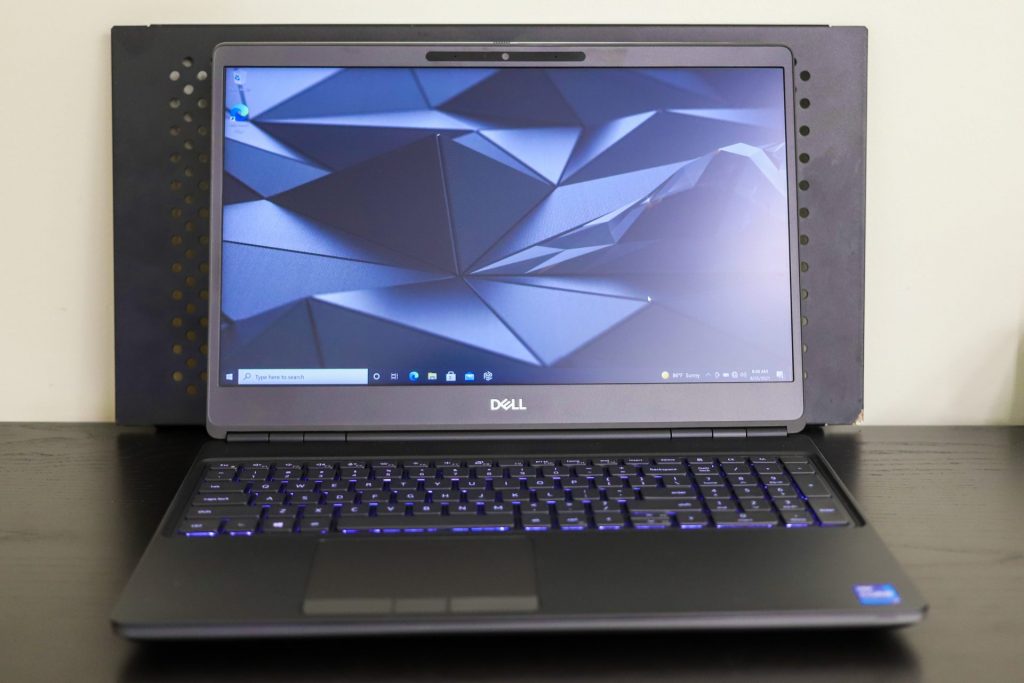 Though factory calibrated, professionals will want to invest in a calibration device. This display also comes with an IR camera for Windows Hello facial recognition. It has a sliding privacy shutter. 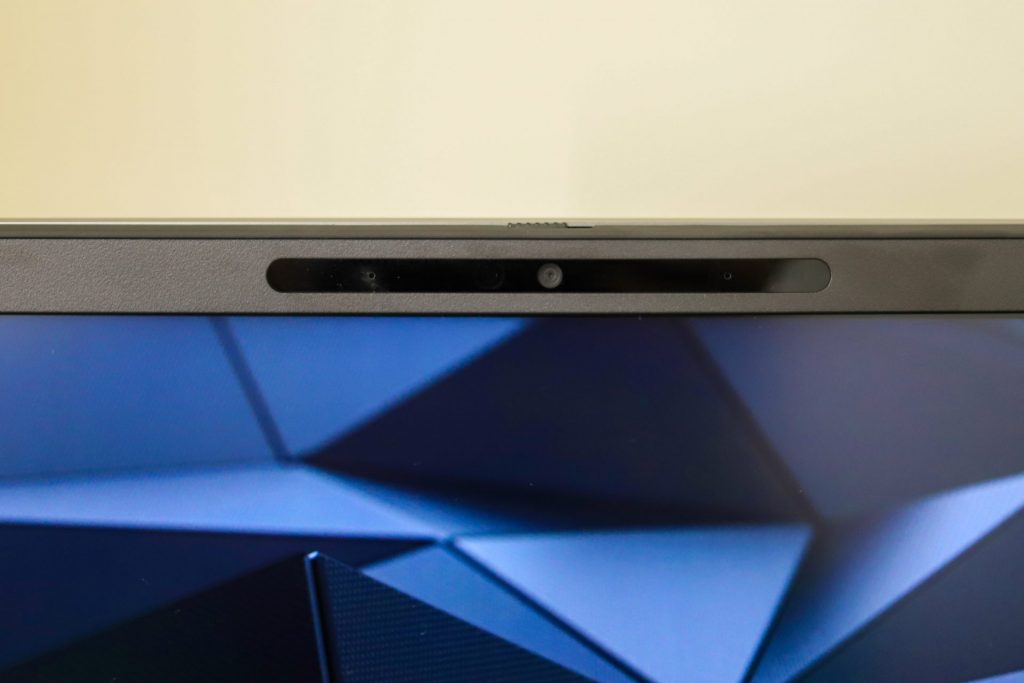 Dell also offers three FHD (1920×1080) screen options. The base non-touchscreen is rated for just 220 nits and 45% NTSC coverage. An upgrade to a 500-nit panel with 100% DCI-P3 coverage is inexpensive ($39 per Dell’s online configurator). It can be had with touch capability for a little more. The UHD screen on our review unit is only available as non-touch with an anti-glare surface.

The keyboard keys have a comfortable 1.65mm key travel distance for good tactile feedback. The number pad is full-size, though the half-height up and down arrow keys take some adjustment; ideally, they would all be the same size for consistency. 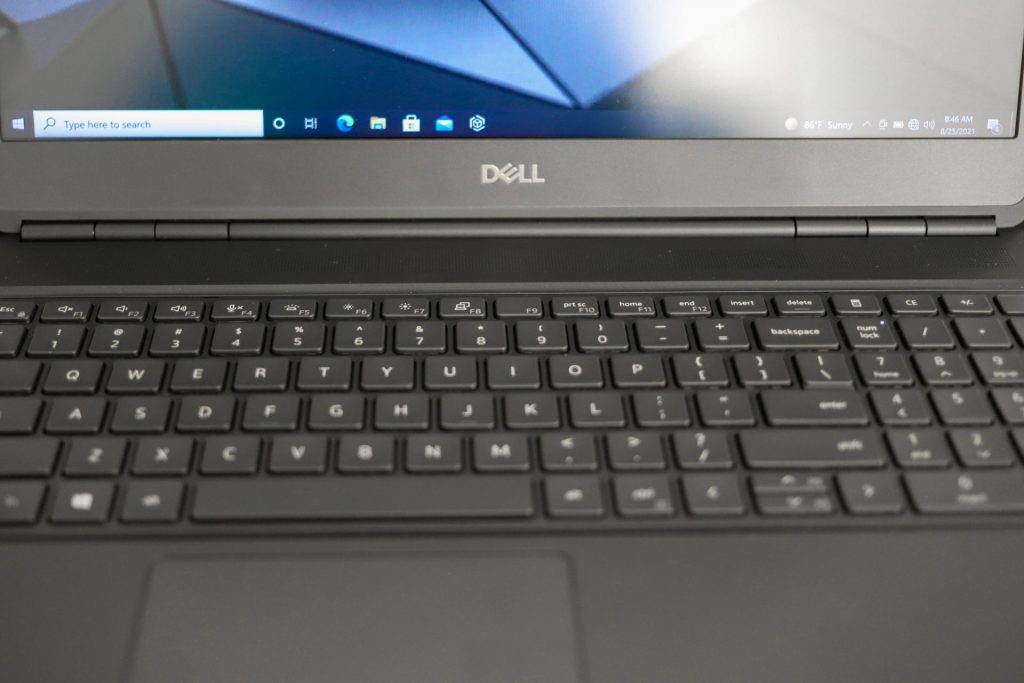 Strangely, the white backlighting on our test model is not a standard feature. 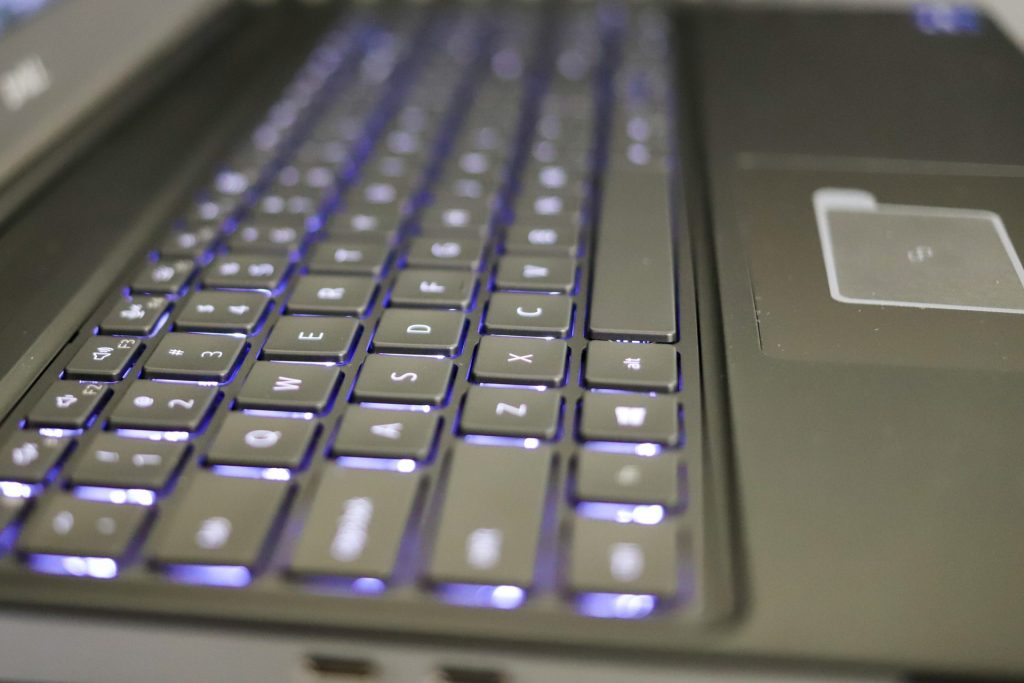 The Precision 7560’s connectivity starts on its left edge with a pair of Thunderbolt 4 (USB Type-C) ports and the optional SmartCard reader. 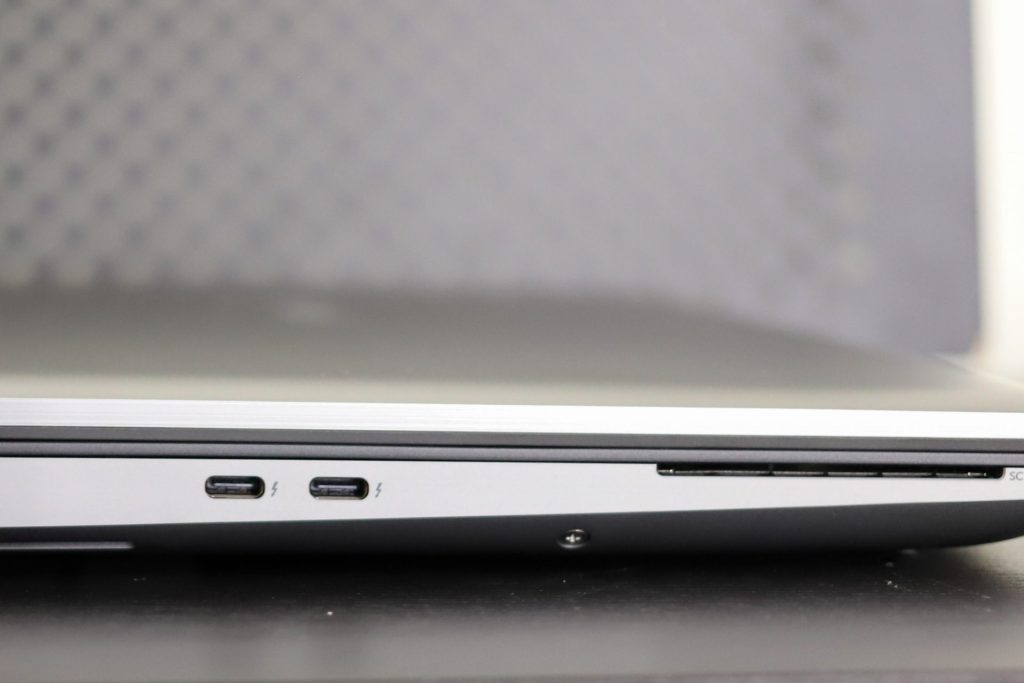 Right-edge connectivity includes a full-size SD card slot, a universal audio jack, a pair of USB 3.2 Gen 1 Type-A ports (5Gbps), and a cable lock slot. One of the Type-A ports has PowerShare to allow device charging while the notebook is turned off. 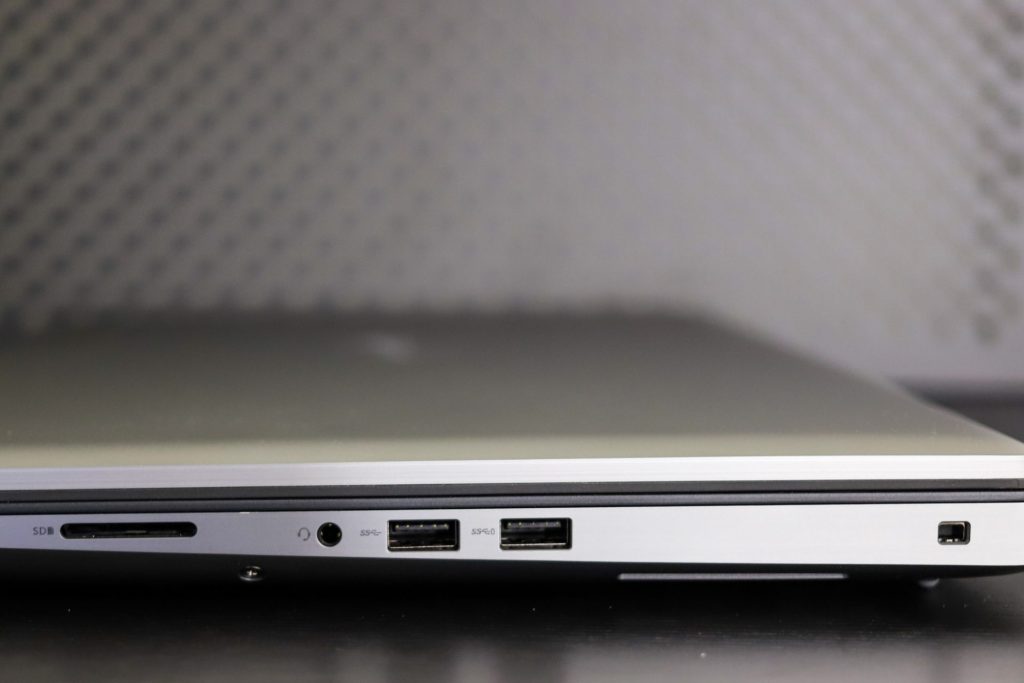 The remaining ports are on the back; they include mini-DisplayPort 1.4 and HDMI 2.1 video outputs and a Gigabit Ethernet jack. The power adapter also connects back here, which is smartly placed since it keeps the cable from protruding from one of the notebook’s sides. Internally, the Precision 7560 has an Intel Wi-Fi 6E AX210 card with Bluetooth 5.2. 5G mobile broadband is optional, though our review unit is not so equipped. 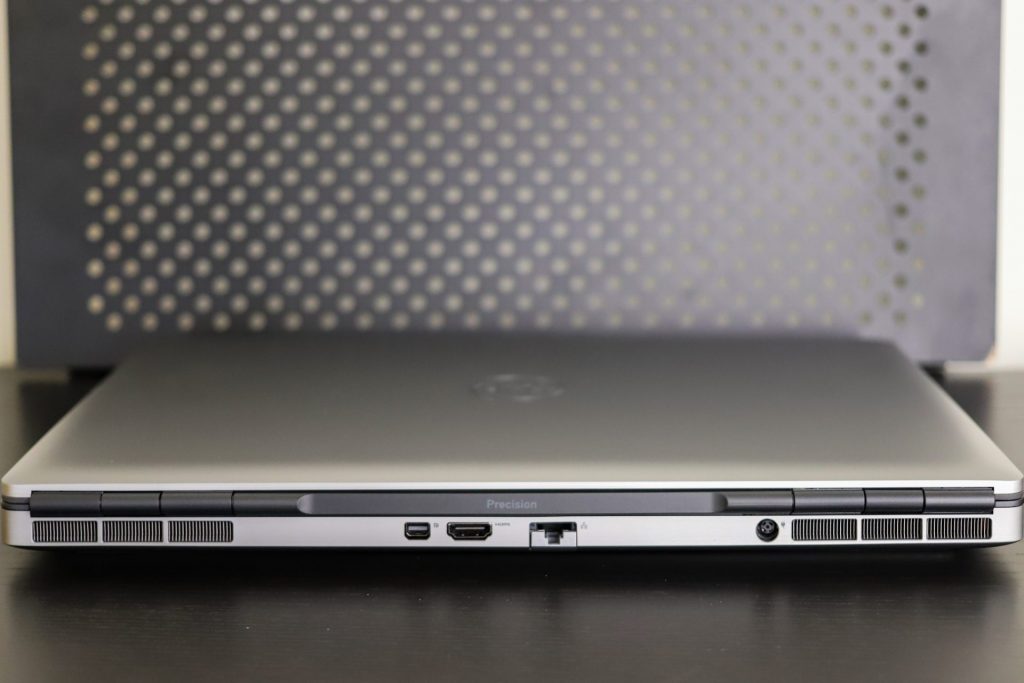 The laptop’s two cooling fans send their air out the back edge, a good design since it keeps the heat away from your hands. Below, our thermal camera shows that under load, the Precision 7560 concentrates most of its heat towards the center-right of the keyboard. 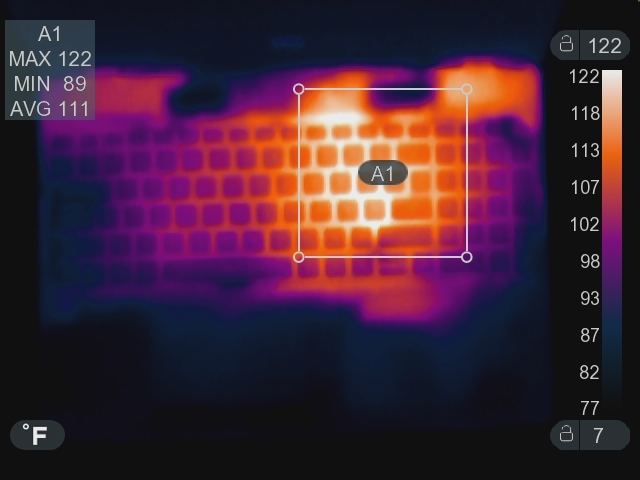 End-user upgradeability is a strength for the Precision 7560. On some models, one M.2 Type-2280 slot resides in a dedicated access panel on the bottom cover, making it unnecessary to remove the cover just to install an SSD. Removing the bottom cover gives you access to all three M.2 Type-2280 slots plus two of the SODIMM slots for memory upgrades. Getting to the other two SODIMM slots requires removing the keyboard. 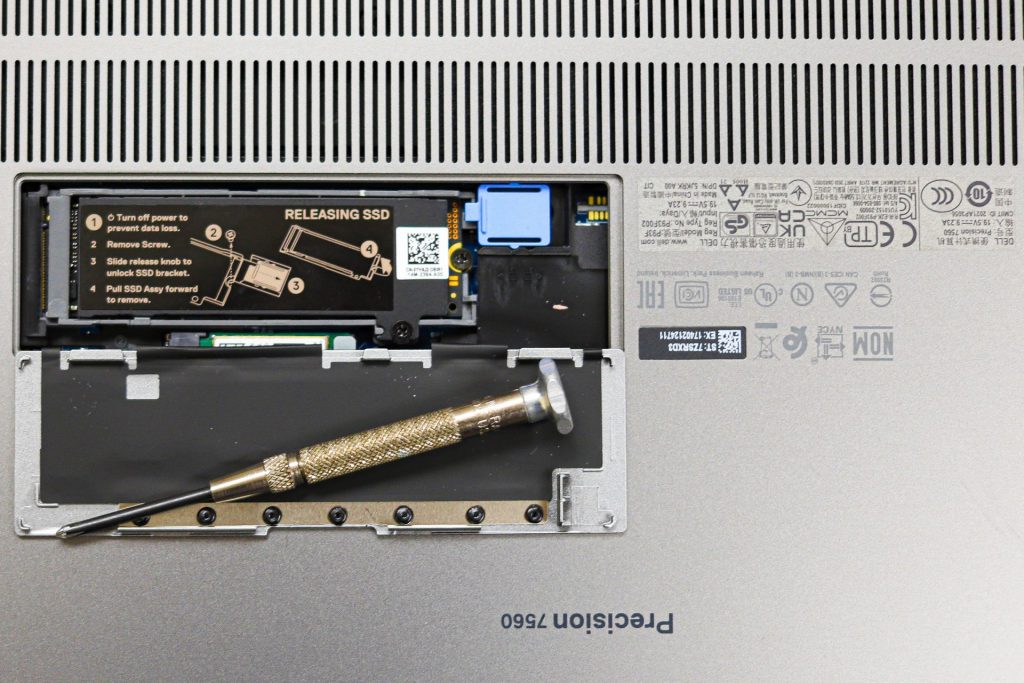 The battery is also under the bottom panel. The 95WHr long life cycle version in our review unit notably carries a three-year warranty like the rest of the notebook. (Typically, batteries are only covered for one year regardless of the total warranty coverage.) A 95WHr ExpressCharge battery is also available if you prioritize quick charging time. Either 95WHr battery is a required upgrade over the base 68WHr battery with our review unit’s powerful RTX A4000 graphics card.

We put our Precision 7560 review unit through our resource-intensive benchmarking regimen to gauge its performance. Our review unit is equipped as follows:

This is a potent configuration even though it’s not entirely top-shelf – for instance, a slightly faster CPU is available (a Core i9-11950H or Xeon W-11955M, both of which can reach 5.0GHz) as well as a formidable RTX A5000 16GB graphics card and up to four times the DDR4 memory (128GB).

However, with hardware a peg or two down from the top, our review unit balances high performance with a relatively reasonable price. It goes for $5,039 on Dell’s site at this writing, but that number can change with corporate or fleet discounts.

Depending on the test, we will compare the Precision 7560 to other workstation notebooks including the ThinkPad P15 Gen 2. Let’s get on with the testing.

The Dell’s numbers seem small next to the ThinkPad’s, but that is because its UHD screen has four times the pixels of the ThinkPad’s FHD (1920×1080) panel. The Dell also uses a GPU that’s one notch down. Nonetheless, its numbers are healthy enough to suggest it can handle demanding creative applications.

Next, we ran SPECworkstation3, a test that specializes in benchmarks designed for testing all key aspects of workstation performance; it uses over 30 workloads to test CPU, graphics, I/O, and memory bandwidth. The workloads fall into broader categories such as Media and Entertainment, Financial Services, Product Development, Energy, Life Sciences, and General Operations. We are going to list the broad-category results for each, as opposed to the individual workloads.

The results are an average of all the individual workloads in each category. The Precision 7560 did well next to the ThinkPad P15 Gen 2 again considering it uses a slightly lesser processor and graphics card.

Starting off is the Montreal model where the Precision 7560 produced 111.1 average and 44.2 minimum FPS. Its numbers are lower than the ThinkPad’s again due to its higher screen resolution.

The Philly model is last; the Precision 7560’s numbers were similar to what it produced in the Montreal model but with a slightly higher minimum FPS.

Next up is the ubiquitous Blender, an open-source 3D modeling application. This benchmark was run using the Blender Benchmark utility (OptiX enabled), which measures in seconds (lower is better). The Precision 7560 performed as follows:

The Precision 7560 did well, predictably a bit behind the ThinkPad P15 Gen 2 with its more powerful GPU.

Lastly, we look OctaneBench, a benchmarking utility for OctaneRender, which is another 3D renderer with RTX support that is similar to V-Ray. 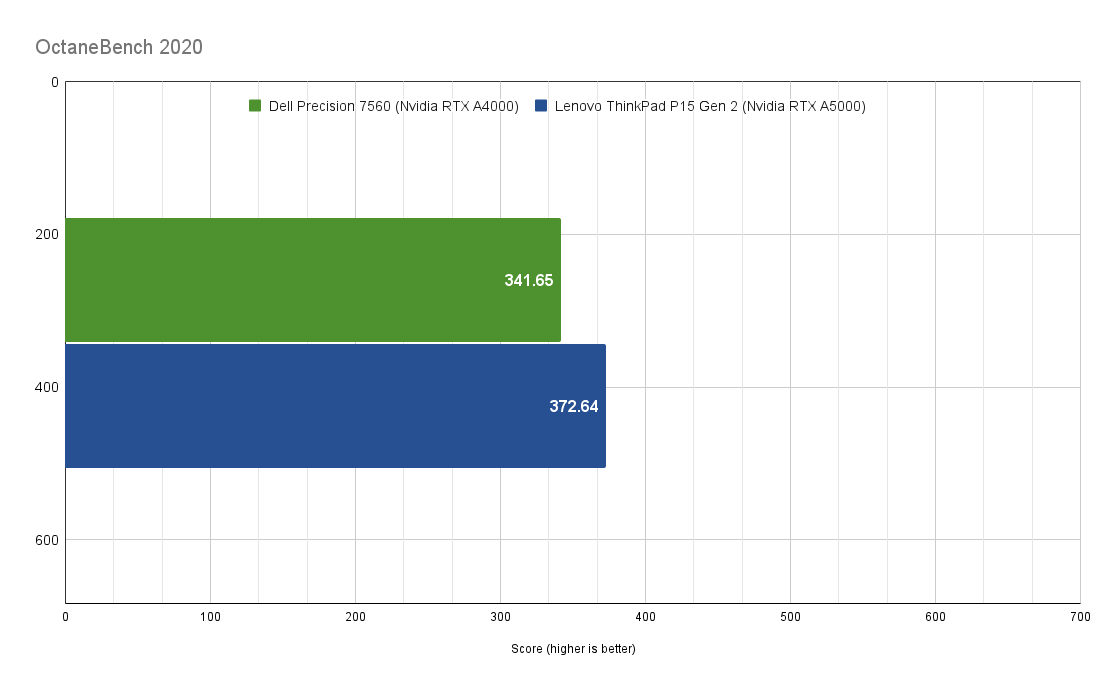 The Precision 7560 delivers formidable workstation capabilities and performance on the go, scoring well throughout our testing thanks to its 11th generation Core i7 processor and Nvidia RTX-class graphics. With up to an eight-core Core or Xeon processor, 128GB of ECC memory, and three storage drives, the Precision 7560 can easily rival a desktop workstation in overall performance. Its available UHD (3840×2160) screen with full Adobe RGB coverage can also make it unnecessary to get a professional external monitor for color-sensitive work. 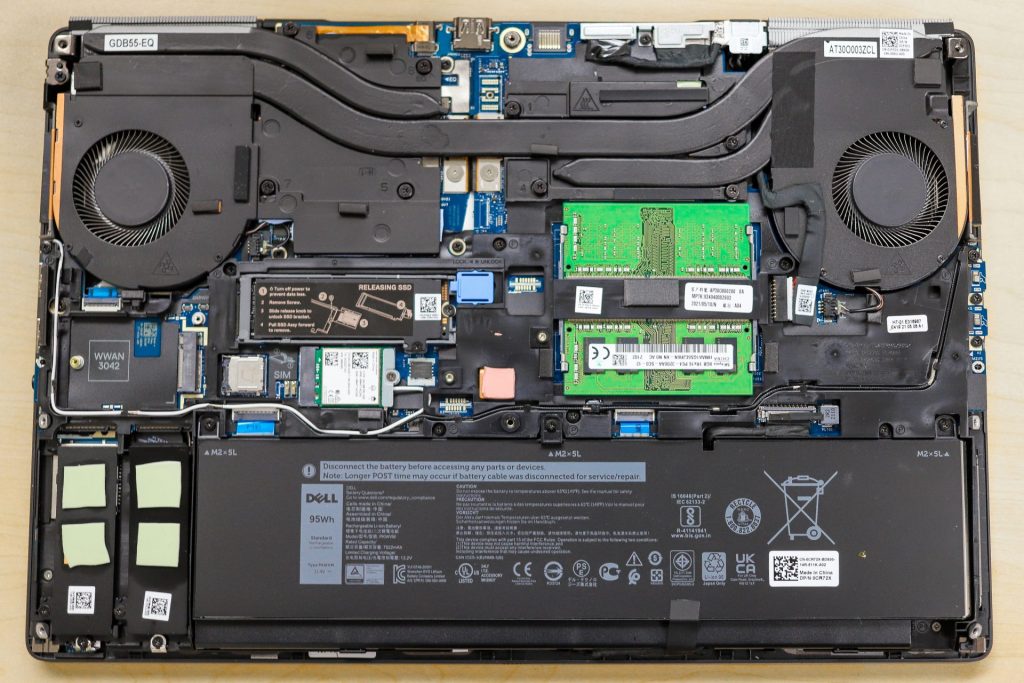 Excellent build quality, comprehensive security features, available 5G mobile broadband, and a standard three-year warranty round out the Precision 7560’s appeal. Inexpensive it isn’t, but it is competitively priced with the HP ZBook Fury 15 G8 and the Lenovo ThinkPad P15 Gen 2. We’d really like to see this config gain with the A5000 and i9, just to see how the top-spec 7560 would hang.  Overall though, the Precision 7560 earns a place among top-shelf mobile workstations.