The Dell UltraSharp U3023E is a 30-inch 2560×1660 monitor with USB Type-C connectivity requiring just a single Type-C cable to support power, display, and audio. The U3023E is built for professionals looking to increase productivity in the workplace. It features a thin bezel, while also having a full range of mobility for any viewing angle.

The Dell UltraSharp U3023E is a 30-inch 2560×1660 monitor with USB Type-C connectivity requiring just a single Type-C cable to support power, display, and audio. The U3023E is built for professionals looking to increase productivity in the workplace. It features a thin bezel, while also having a full range of mobility for any viewing angle. 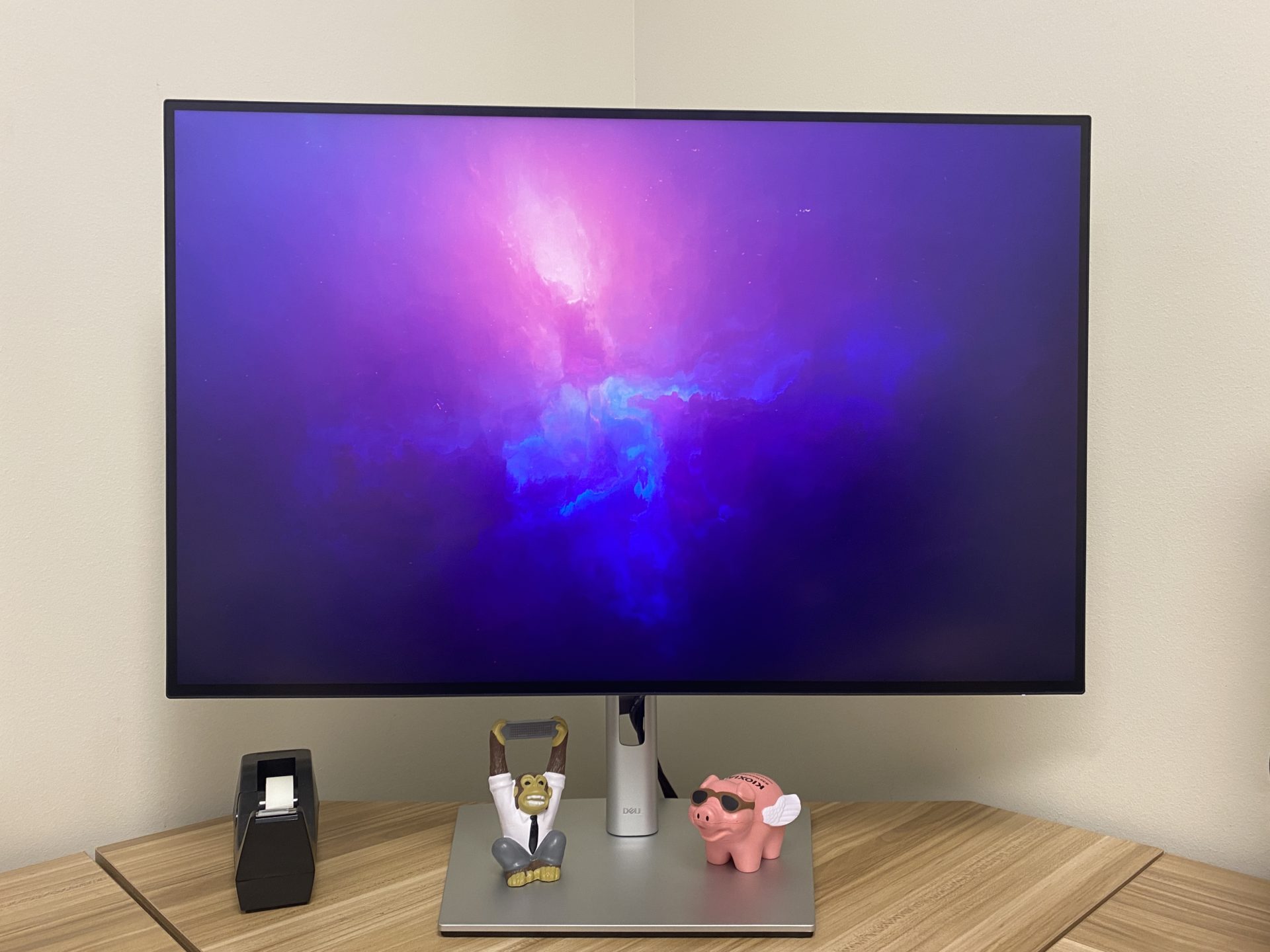 The Dell UltraSharp U3023E features a wide variety of connectivity including an HDMI port, DisplayPort in, DisplayPort out, a USB-C port, USB-C upstream port, four SuperSpeed USB 10Gbps (USB 3.2 Gen2), an RJ45 Ethernet connector, and more. With all this connectivity and more, it makes it quite easy to see how this monitor can be turned into a productivity hub for any professional. 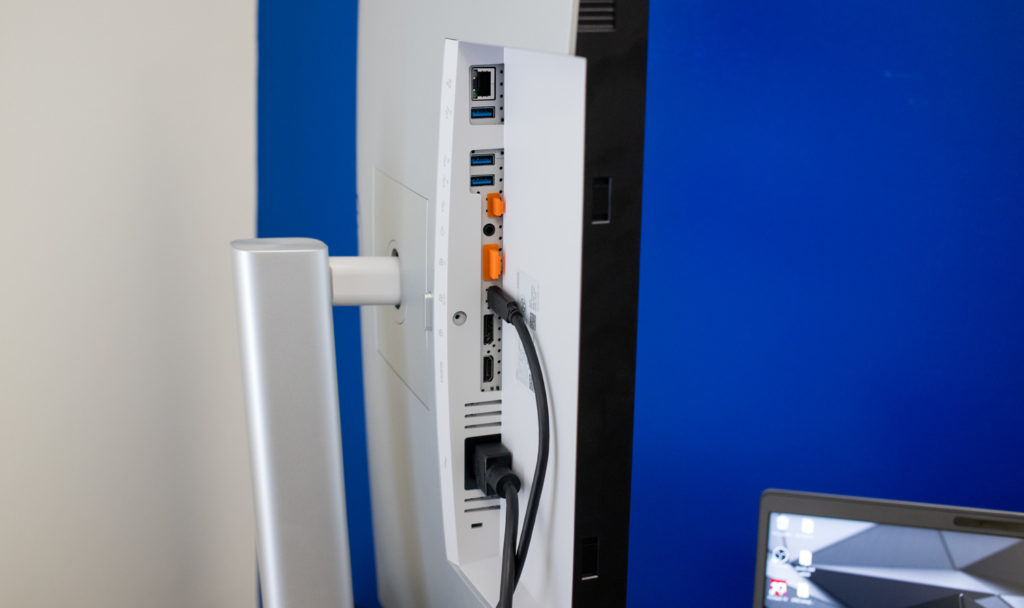 Viewing comfort was a big must for Dell as they were engineering this monitor as they built in their ComfortView Plus. This newly optimized technology from Dell features a built-in low blue light screen which reduces the harmful blue light that users tend to stare at all day long. The U3023E also leverages Dell’s True color technology that allows users to see 1.07 billion colors across a wide spectrum with 95% DCI-P3 and 100% sRGB color coverage. 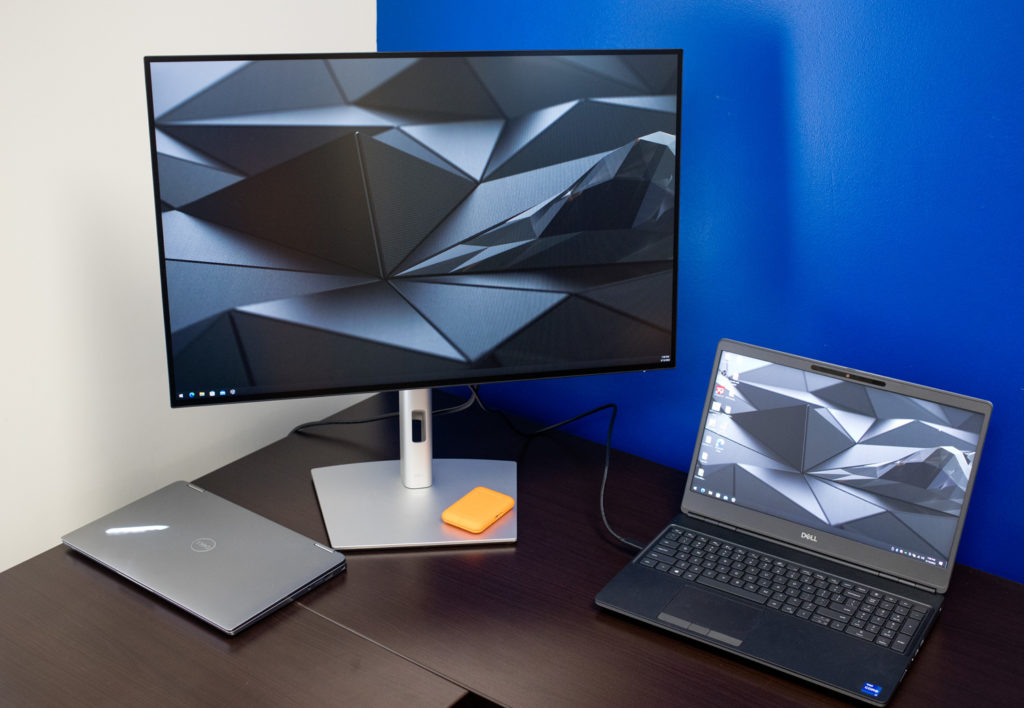 Dell has also continued the process of sustainably making their monitors, as the U3023QE continues in their lineup. The U3023QE is made of 85% of post-consumer recyclable plastic and is able to meet the latest environmental standards including ENERGY STAR®, and TCO Certified Edge, and is EPEAT® Gold7 registered. The box and packaging that the monitor comes in are also 100% made of recyclable cardboard packaging.

The  U3023E is a well-built, well-designed 30-inch monitor. The U3023E features a sleek curved matte silver finish across the back, matching the stand arm and base. The top, bottom, and sides show off the thin bezel that blends right in with the design and isn’t distracting to users. The U3023E stand offers a relatively small footprint proportional to the 30-inch screen and the design falls in line with many other Dell monitors. 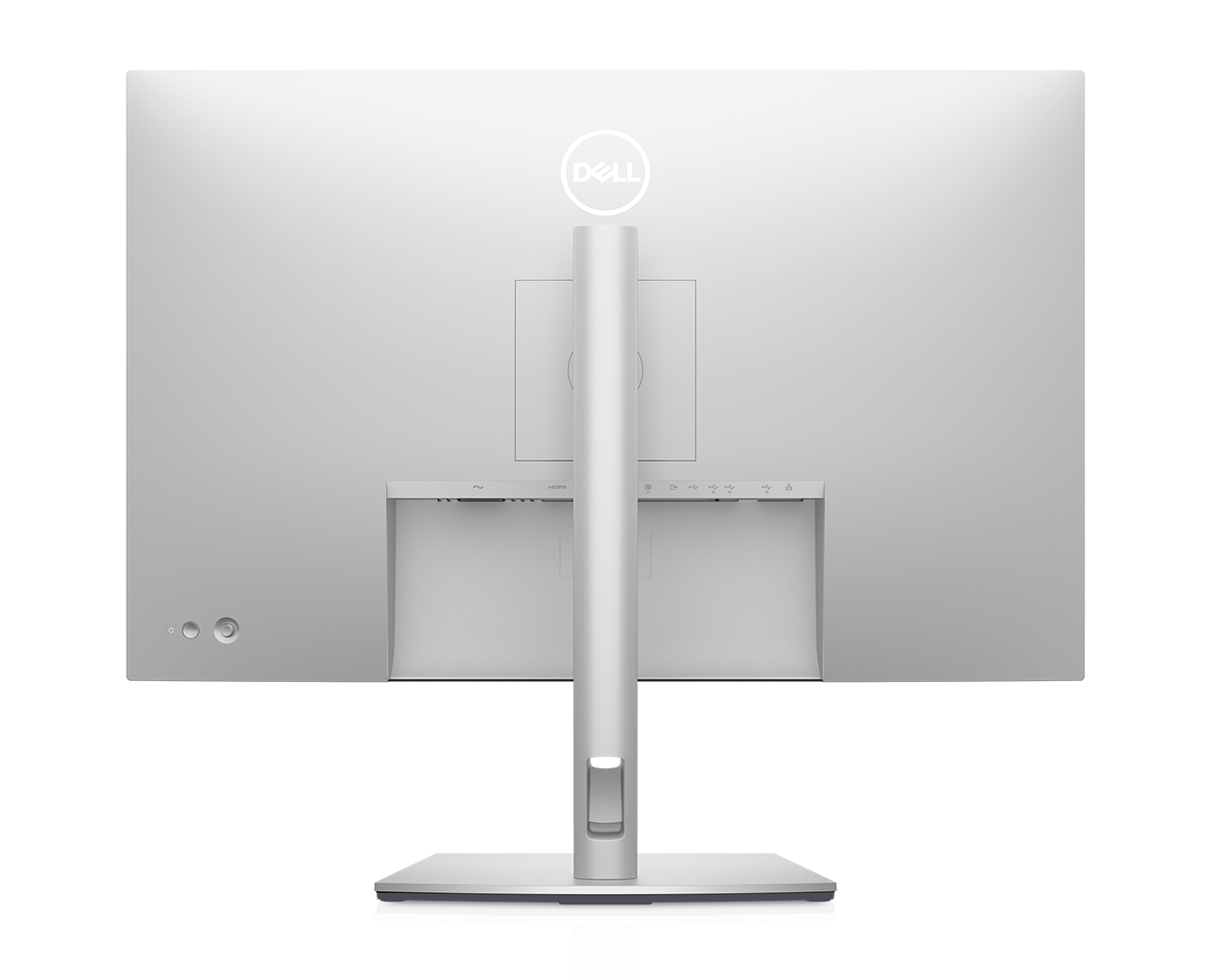 Attaching the monitor to the monitor stand is quite easy as right out of the box, there are three pieces. Users attach the arm to the stand with a screw from the bottom and then the arm snaps into place on the back of the monitor, and the setup is complete.

Adjuting the U3023E is quite easy with the wide range of motion that it is. With its height adjustment, tilt, swivel, and ability to pivot, we were able to get the most optimal viewing angle for our comfort.

All the connectivity on the Dell UltraSharp U3023E can be found on the rear of the monitor being split between two different areas. Most of the connectivity options on the U3023E are located right near each other; from left to right there is a security lock, power connector, HDMI port, DisplayPort in, USB-C port, DP out, audio line-out port, USB-C upstream port, three SuperSpeed USB 10Gbps (USB 3.2 Gen2), and an RJ45 port.

The cable management hole running through the stand arm also makes quick work of the cables that we have running off of the U3023E. This cable management aspect is nice to see from Dell as it aids in helping clean up the clutter on workstations. 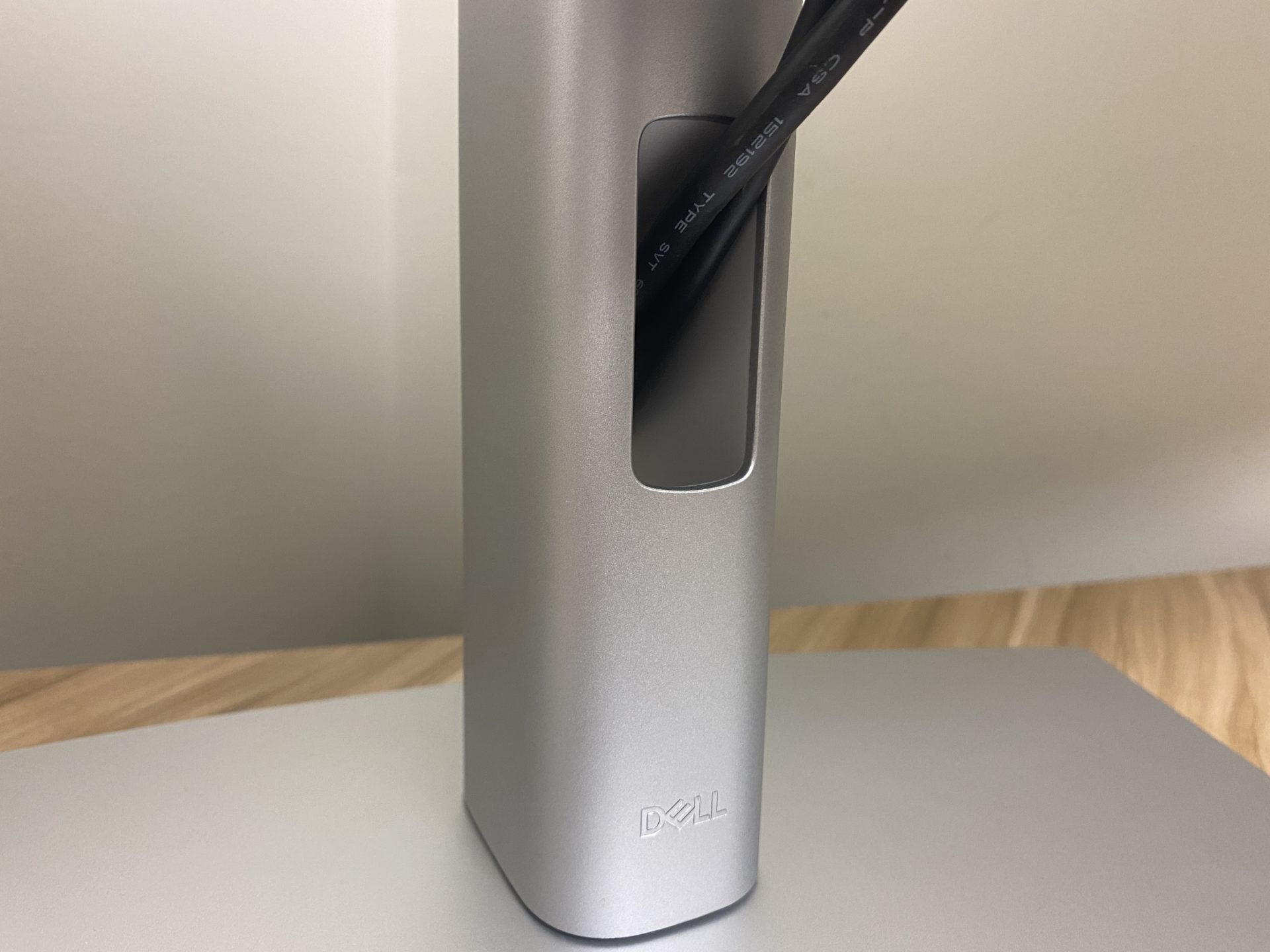 The U3023E is completely managed by the joystick that is able to navigate all system settings and on-screen menus. There is a gap between users in which some people prefer the single joystick to control everything and some prefer the buttons for navigation. However, what we have found is that we had no problem using or setting up the monitor with the joystick and have found that in some cases it might be easier to use. This is because with buttons, most of the time, it is a must to keep track of which button to use for what, as with a joystick, it is all in one place. The power and menu buttons are similar enough that with their close placement, it’s easy to hit the power by accident.

The U3023E is made for those that want a large screen to help increase productivity in the workplace or home. Being a 30″ WQXGA (2560×1660) 16:10 monitor, the U3023E is great for those that are looking to stretch productivity on screen. With a thin bezel, setting two of these up side-by-side will create a virtually borderless setup. Although this monitor is 2560×1660, it is limited to 60Hz, users should expect to use this monitor for a professional environment rather than a gaming one.

For professional tasks and programs in the professional workspace, the U3023E would be able to tackle any task and do it well. The U3023E gives users a ton of screen space with up to 38 preset window partitions and the ability to personalize up to five windows allowing for any type of multitasking needs.

Once connected to a laptop or workstation via USB Type-C, the monitor can also provide power, making for a quick setup. The U3023E also features the ability to connect two different input sources, seamlessly transitioning between the two allows for more versatility. 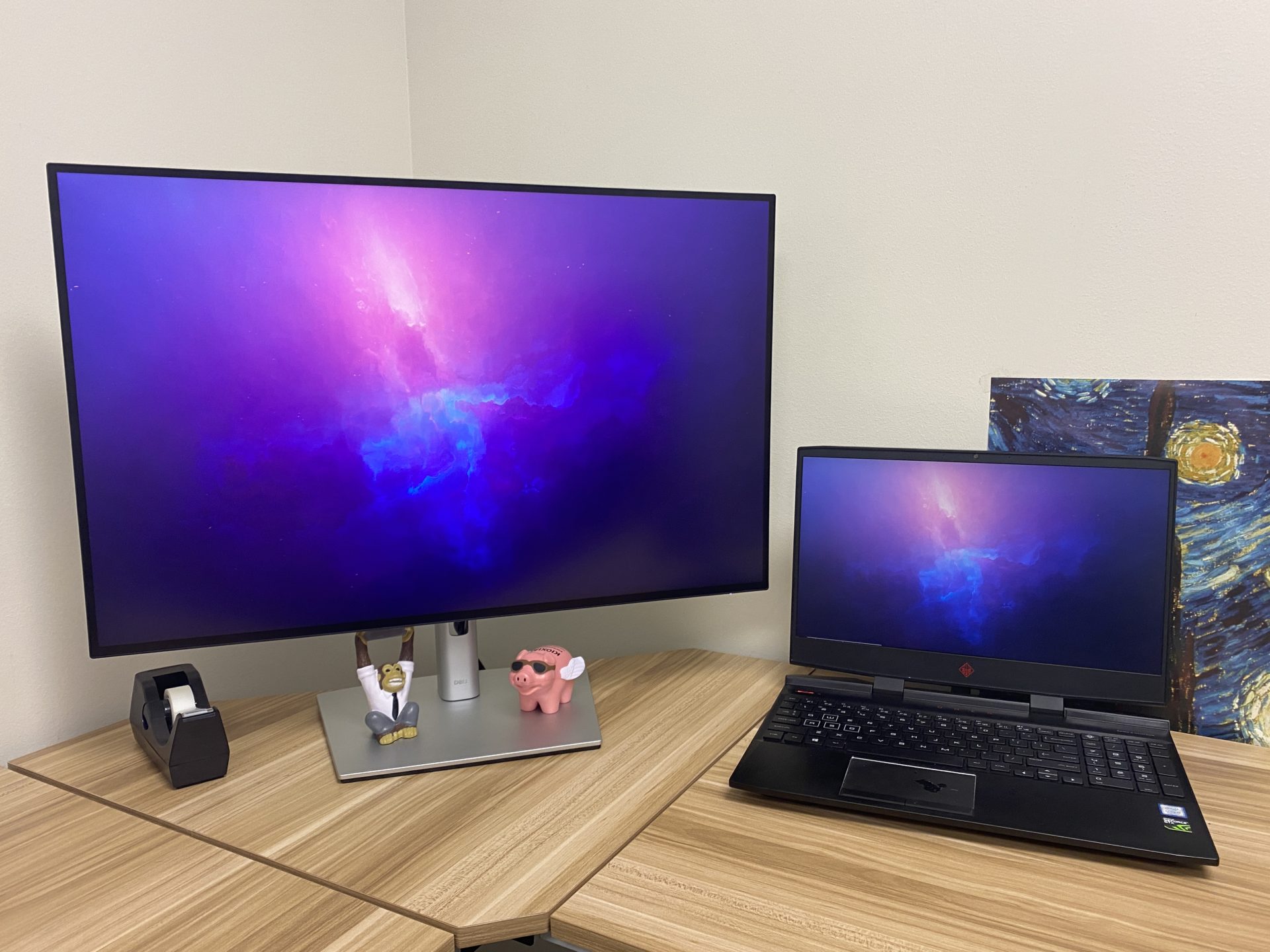 In our use, we mainly used the U3023E for workflow improvements, i.e., having more windows/tabs open than just the one or two that a laptop is able to handle and effectively display. The 30-inch screen does make easy work of having multiple windows and even though there are some larger screens out there, a setup of two of these next to each other would make for a very good workspace

We also found that the use of a single cord is great for cable management and easy to set up without worrying about which cables are going where. With fewer cords to navigate and manage, the U3023E can give users the peace of mind of a cleaner setup, and as we know, when a workspace is organized and clean, it increases productivity.

Overall, we did enjoy using the Dell UltraSharp U3023E 30-inch USB-C hub monitor, making it another good productivity monitor in Dell’s extensive monitor lineup. While having super large monitors can be good for some people in the professional or home workplace, such as the 38-inch UltraSharp U3821DW, the 30 inches that the U3023E does have is more than enough space for us. That said, the U3023E does have a price tag of around $800, so those that want this monitor really have to need it. 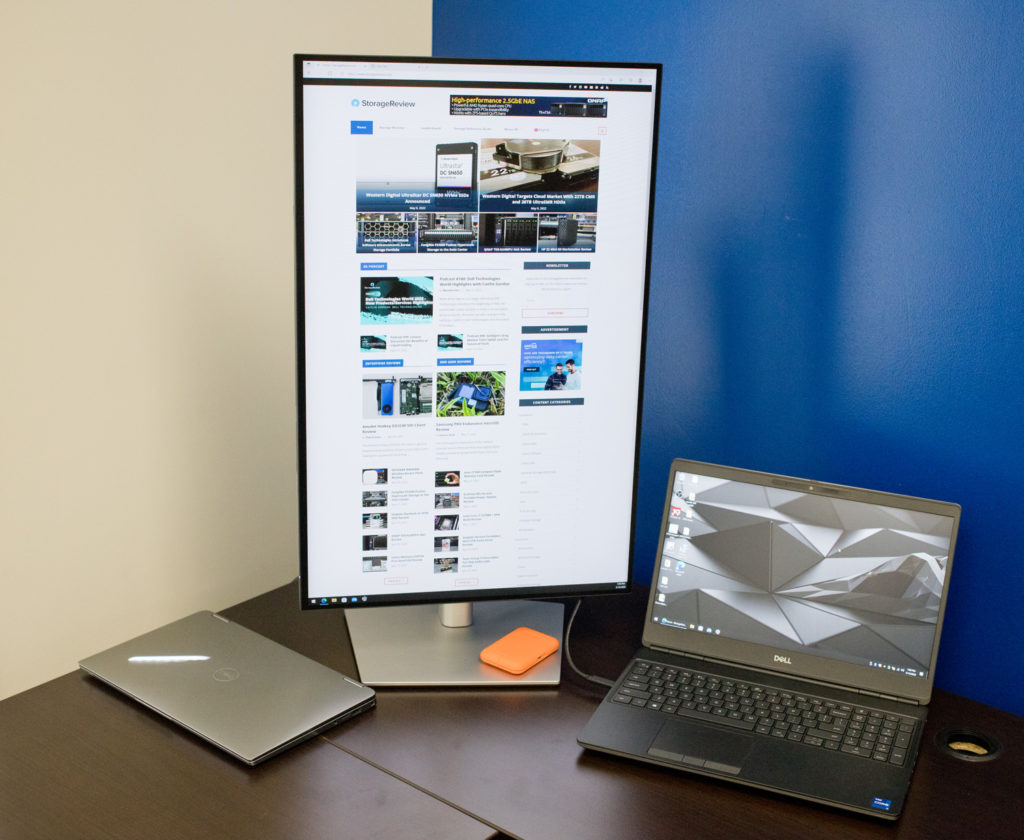 The U3023E is made for those who need a large display for multiple productivity tasks. Although it might not be universal when it comes to different casual tasks like gaming and is more or less for workplace tasks, it makes up for that use in the various uses of the multiple points of connectivity such as the four USB Type-A ports or even the RJ45 Ethernet connector. The tilt, swivel, and pivot functionality just adds to the wide range of deployment points that the U3023E can have, making it available for anyone in any type of setup.

The other aspect of the U3023E that many users will find a use for is the power delivery and display over the USB Type-C cable. The target audience is laptop and workstation users and is certainly made for those users that need a good display while eliminating cable clutter. The ComfortView Plus technology that Dell has also integrated allows users to look at the U3023E for extended periods of time without worrying about the harmful blue light. Overall it’s another great large display from Dell, that should may any workstation more enjoyable and productive.