Dot Hill has long made storage controllers and systems that were capable of handling both traditional disk and SSD volumes. In November they released a major software update though that amongst other things, optimizes their 4004 controller architecture for hybrid configuration. The 4004 is what's inside the Dot Hill AssuredSAN Ultra48 that we reviewed previously, and turning our HDD configuration into a hybrid just means swapping out HDDs for SSDs. The SSDs can be used as a real time tiering configuration or in a cache mode as an extension of the storage controller cache.

Dot Hill has long made storage controllers and systems that were capable of handling both traditional disk and SSD volumes. In November they released a major software update though that amongst other things, optimizes their 4004 controller architecture for hybrid configuration. The 4004 is what's inside the Dot Hill AssuredSAN Ultra48 that we reviewed previously, and turning our HDD configuration into a hybrid just means swapping out HDDs for SSDs. The SSDs can be used as a real time tiering configuration or in a cache mode as an extension of the storage controller cache.

As mentioned, Dot Hill had recently updated their RealStor software. The two updated features that really make a difference in the Ultra48 array, especially a hybrid array, are the RealTier and RealCache. RealTier is software for automatic real-time tiering for both HDDs and SSDs. What is does is it takes frequently used or “hot” spots and moves the data to the best tier. The best tier can be the SSD tier in a hybrid model or an HDD tier that has faster spinning disks. Say a company has an urgent project that several people are working on RealTier would move the data to the best tier for much higher overall performance. At the same time RealTier moves less frequently used or "cold" data over to a slower, less expensive tier. The automatic migration of data makes RealTier a money/capacity saver. RealCache dramatically increases read performance by automatically activating an SSD to become an extension of the controller cache.

RealStor software has many other features that will be beneficial to customers of a hybrid array. RealStor uses a streamlined user interface to boost performance in any sized organization. We mentioned the RealTier and RealCache above, the first improving performance in real-time as the needs demand and the second boosting read-intensive performance by extending the controller cache. RealStor has a thin provisioning feature, RealThin, which allows IT managers to respond to data growth as needed by streamlining, provisioning, and modifying volumes. A LUN pinning feature allowing certain applications to be pinned to the high performance tier. An automatic pooling feature called RealPool. RealQuick, a rapid RAID rebuild feature that works by only rebuilding the sectors that contain actual data, which results in a faster rebuild as the unnecessary sectors are skipped over. RealSnap is a feature that allows up to 1,024 virtualized snapshots to be taken at a time without impacting storage performance. All of the new features are managed through RealStor's Storage Management Console, that not only provides support for managing, configuring, and monitoring RealStor's virtualization features, it can also manage legacy DMS software. For those that prefer it, RAIDar 2.0 is still available.

Our review configuration adds 4 x 400GB HGST SAS SSDs to our Ultra48 and since the SSDs help with hot-data movement we removed 16 HDDs from our old build that we didn't need for capacity or performance. The RealStor license is $2600, no additional licenses are needed. The total cost for the new configuration used in our review, including the 4 SSDs and the 32 HDDs is $113,158.

Since we are using the same array, the main difference being the addition of SSDs to the existing setup, the design and build are the same as the Dot Hill AssuredSAN Ultra48 Review. Adding the SSDs into the chassis is a simple process with the pullout trays and the quick-release drive bays. Since we upgraded the Ultra48 firmware at the same time, we started with a clean slate vs migrating data between the old LUN layout and the new one that is able to offer read/write cache with a faster storage tier. The four SSDs may be inserted into any slots within the Ultra48 chassis.

DotHill's new software that enabled SSD read/write cache also brings with it a completely updated management interface. Most of the functionality is the same with a much cleaner and polished look. Another improvement is the GUI offers real-time performance data for each controller, as well as showing what each storage tier is doing across both controllers. It also shows storage utilization, including how much of your SSD tier is being leveraged. These features are incredibly useful since when customers eventually grow into their array, knowing when you might need to add additional cache (or if you even have to add more) can help with long-term planning. 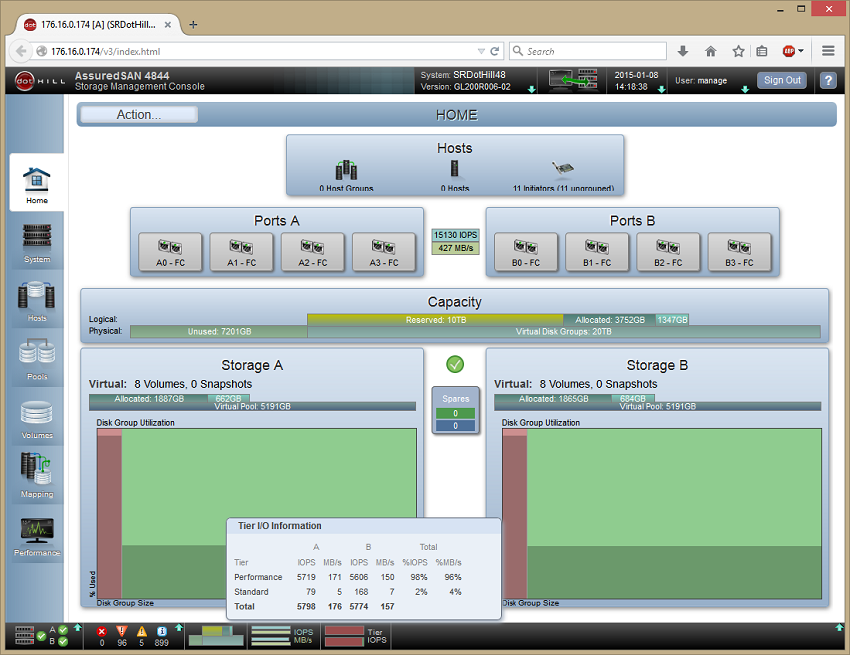 With each platform we test, it is very important to understand how each vendor configures the unit for different workloads as well as the networking interface used for testing. The amount of flash used is just as important as the underlying caching or tiering process when it comes to how well it will perform in a given workload. The following list shows the amount of flash and HDD, how much is usable in our specific configuration and what networking interconnects were leveraged:

Our first two benchmarks of the Dot Hill AssuredSAN Ultra48 are the VMware VMmark Virtualization Benchmark and the Microsoft SQL Server OLTP Benchmark which both simulate application workloads similar to those which the Ultra48 and its comparables are designed to serve.

The StorageReview VMmark protocol utilizes an array of sub-tests based on common virtualization workloads and administrative tasks with results measured using a tile-based unit. Tiles measure the ability of the system to perform a variety of virtual workloads such as cloning and deploying of VMs, automatic VM load balancing across a datacenter, VM live migration (vMotion) and dynamic datastore relocation (storage vMotion). The Dot Hill Ultra48 with SSD cache is the most capable hybrid array we've evaluated thus far. It managed to reach as high as 18 tiles which happens to be the upper limit of our testing infrastructure. The improvement over the disk-only configuration is immense. Where the disk array started to struggle at 8 tiles, the hybrid configuration trucked along to 18 without issue which is even more impressive given how small the flash pool is. 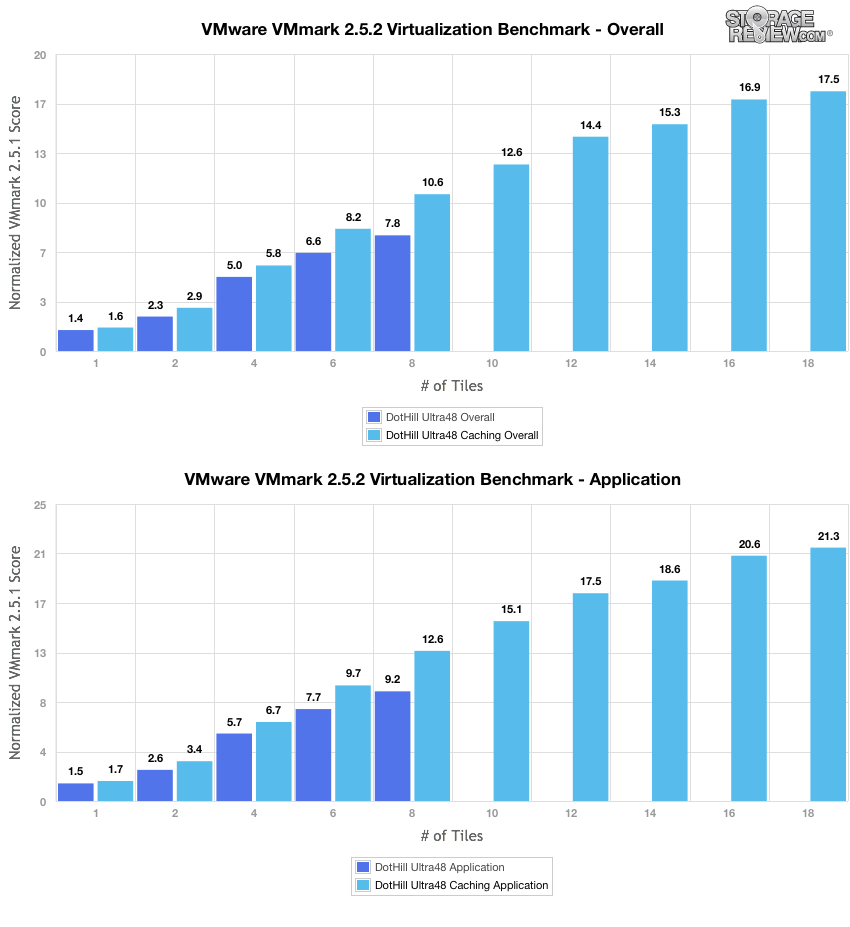 The Ultra48 performed at 6,169 TPS when configured at RAID10 with SSD cache putting it at second overall behind the AMI StorTrends 3500i, which barely beat the Ultra48 posting 6,272 TPS or only 103 TPS better. The hybrid Ultra48 with SSD cache performed nearly twice as many TPS as the non-hybrid RAID10 configuration and over six times as many TPS as the RAID50 configuration.

The results of the average latency benchmark had similar placing but this time the AMI StorTrends 3500i had almost three times lower latency at 41ms where the Ultra48 configured at RAID10 with SSD cache had a latency of 121ms, however it had dramatically lower latency than its non-hybrid configurations.

This synthetic analysis incorporates two profiles which are widely used in manufacturer specifications and benchmarks:

In the average latency tests, the Ultra48 with SSD cache landing about in the middle once for with speeds of 4.48ms read and 8.77ms write. The HP StoreVirtual 4335 had the lowest read latency at 1.81ms and the AMI StorTrends 3500i had the lowest write latency at 5.89ms. Again we see a dramatic reduction in latency with the hybrid configuration.

Looking at maximum latency we see the Ultra48 with SSD cache really shine. It had the lowest latency overall in both read and write with a read performance at 25.22ms and a write performance of 29.16ms much lower than all other arrays.

In our standard deviation tests the Ultra48 with SSD cache again performed well having the lowest latency in write at 3.02ms but was just nudged out by the HP StoreVirtual 4335 in read, with latencies at 1.44ms and .93ms respectively.

Moving on to our 70% read 30% write random workload, The Ultra48 with SSD cache run in the middle to top. It peaked at 39,226 IOPS. The overall top performer was the AMI StorTrends 3500i 53,687 IOPS though it did take the entire run for it to get to these higher numbers. 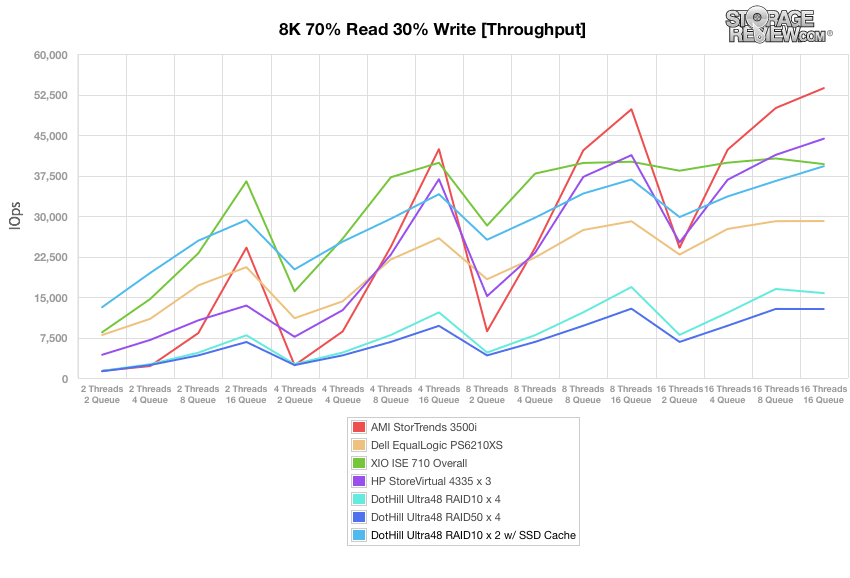 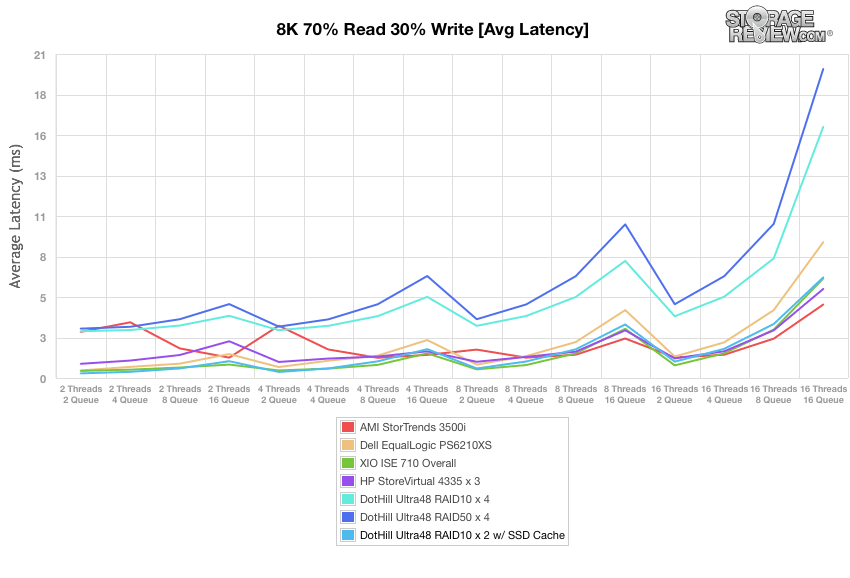 With max latency, the Ultra48 with SSD cache kept a fairly consistent low latency throughout making it the top performer. 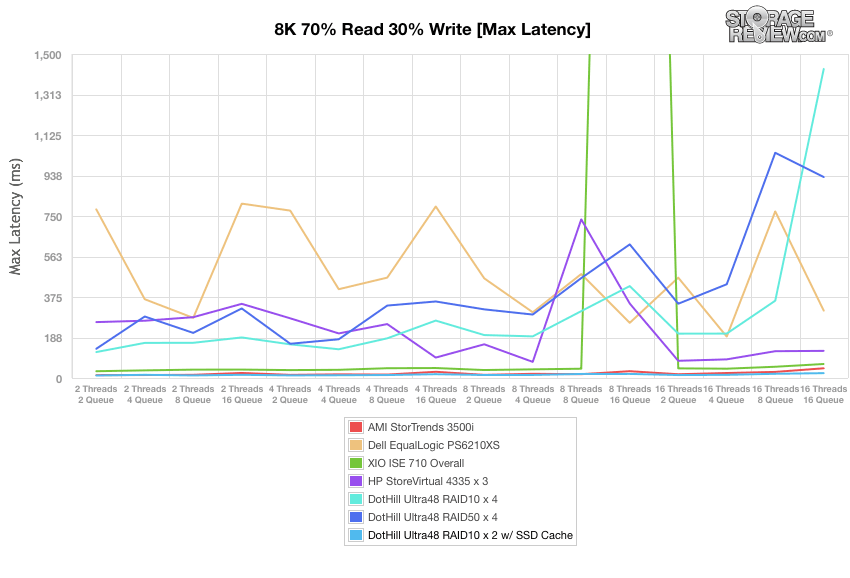 The standard deviation test showed similar to the above. The Ultra48 with SSD cache again kept a consistent very low latency throughout the test, once again coming out at the top performer. 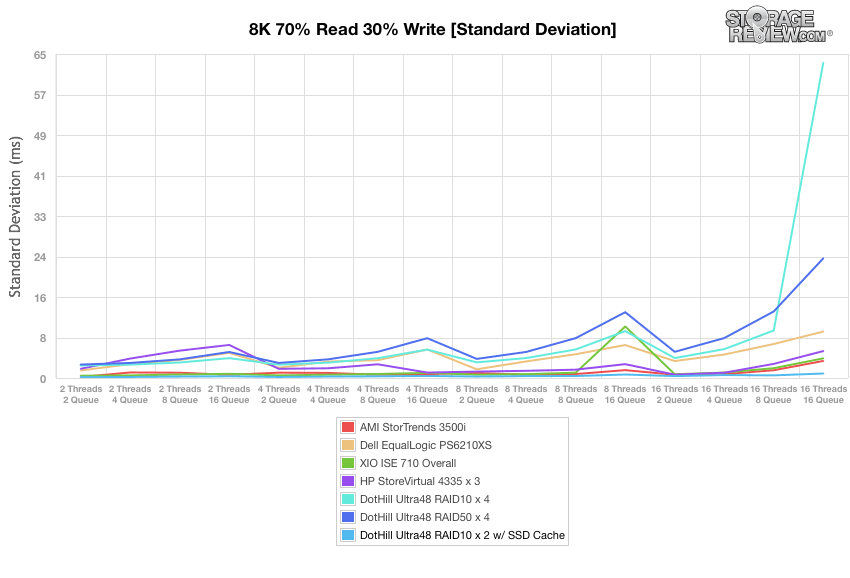 Our final synthetic benchmark is based on sequential 128k transfers with 100% read and 100% write operations. Like our 8k test above we compared the hybrid Ultra48 to the non-hybrid model. This time we saw the hybrid perform much better in the read performance with three times greater performance than the RAID50 non-hybrid, the read throughput was 2,206,924KB/s in the hybrid and 684,368KB/s in the RAID50. On the flip side the hybrid didn’t perform as well with write throughput, they hybrid had a write performance of 1,997,209KB/s while the RAID10 had a write performance almost twice as high at 3,759,308KB/s.

Dot Hill has greatly expanded the functionality and productive reach of their 4004 storage controllers and the systems they reside in like the Ultra48 in our lab. By adding just a few SSDs customers have the opportunity to post impressive performance gains from existing hardware. For new deployments, the hybrid option should be a slam dunk for many who want the most out of the ultra-dense Dot Hill chassis. In addition to the hybrid features, Dot Hill also added in several other new features in RealStor 2.0 like automatic, real-time tiering to increase performance, extending the controller cache through the SSDs to dramatically improve read times, LUN pinning allowing applications to be pinned to the high performance tier, automatic pooling, thing provisioning, and a virtualized snapshot features that allows up to 1,024 snapshots to be taken at a time without affecting performance.

What you get with Dot Hill is a veteran storage controller that has not only been around the block, but has seen significant investment in terms of new features and performance enhancements as we've seen here. With just four SSDs, very good SSDs in fact, the all-disk Ultra48 transitioned into a high-performance hybrid array that held its own against other leading hybrid solutions. The newfound performance boost combined with the incredible density of the Ultra48 platform makes for an interesting opportunity. Of course the hybrid benefits cross the entire portfolio that uses the 4004 controllers, so more standard form factors also see the benefits if high-density isn't a core concern.

The Dot Hill Ultra48 Hybrid has the same blend of controller quality, chassis capacity and cost benefit in a 2U form factor with the added benefit of much better performance and new features thanks to SSDs and updated software.