HGST has expanded their line of Deskstar NAS HDDs to include a 6TB model, which is optimized for small enterprise, SOHO, or consumer environments leveraging up to 8-bay NAS systems. HGST has promised both reliability and performance from these 7,200RPM 3.5" drives, maintaining 1 million hours of use between failures and delivering seek times of less than 12ms. The new 6TB offering is a boost in capacity of 50% compared to HGST's previous top of the line 4TB drives.

HGST has expanded their line of Deskstar NAS HDDs to include a 6TB model, which is optimized for small enterprise, SOHO, or consumer environments leveraging up to 8-bay NAS systems. HGST has promised both reliability and performance from these 7,200RPM 3.5" drives, maintaining 1 million hours of use between failures and delivering seek times of less than 12ms. The new 6TB offering is a boost in capacity of 50% compared to HGST's previous top of the line 4TB drives. 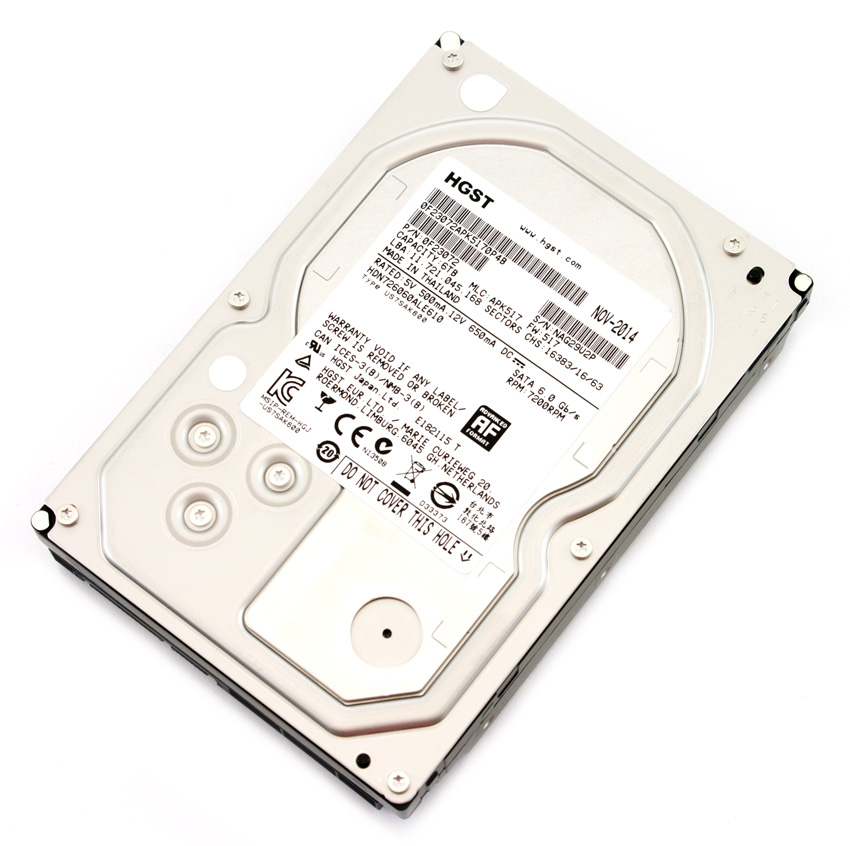 The hallmark of the Deskstar NAS line is its Rotational Vibration Safeguard (RVS), which takes into consideration whole-system vibration. Each drive accounts for subtle vibrations caused by neighboring HDDs (which would usually cause superfluous re-transfers) keeping the spindle on the right track, optimizing performance and prolonging drive life. This makes the drives ideally suited for the multi-drive environments found within NAS. While primarily rated for smaller tower form factor NAS, the drives will also do well in smaller rack-mount form factors.

HGST Deskstar NAS HDDs have a street price of $299.99 and carry a 3-year warranty. This review includes 8x of the 6TB capacity.

The HGST Deskstar NAS is built on the established Deskstar line of consumer hard drives, its casing reveals no significant departures from its sibling drives. 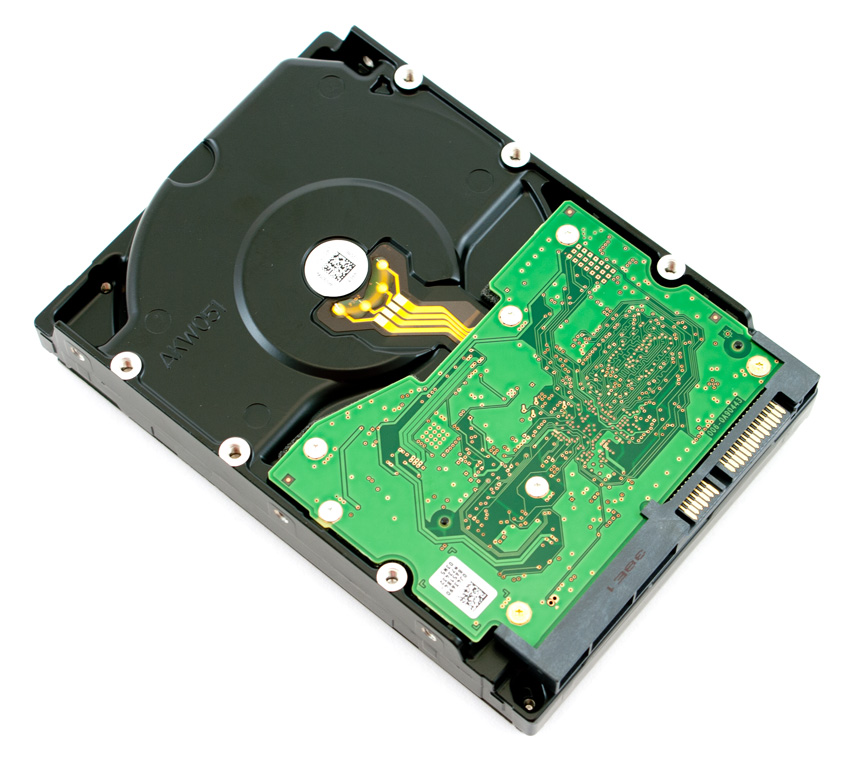 A closer look at the Deskstar NAS controller PCB reveals an LSI controller as well as Samsung DRAM cache alongside a Smooth motor driver. 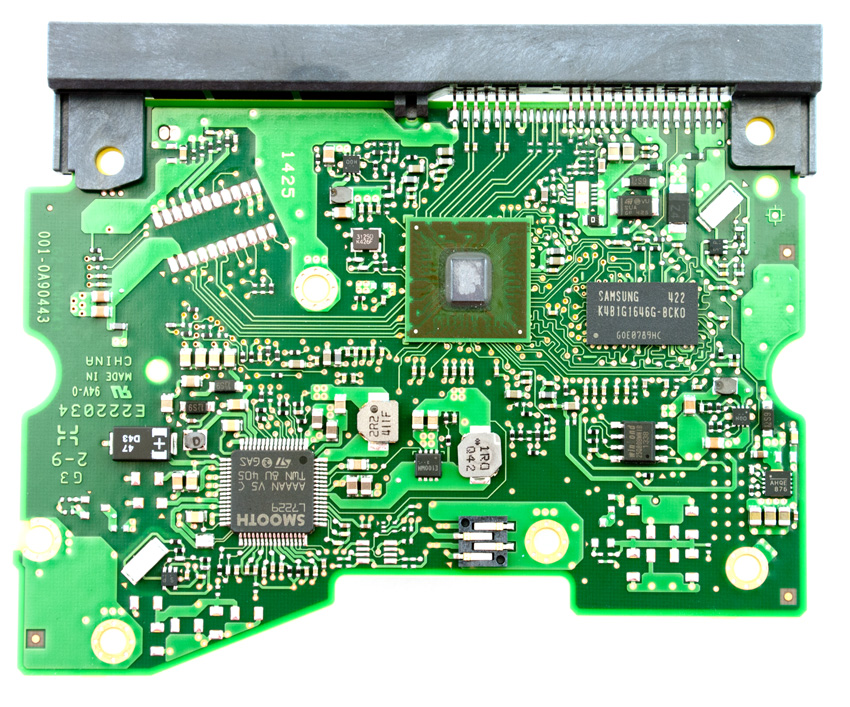 Our NAS hard drive benchmark process preconditions each drive into steady-state with the same workload the device will be tested with under a heavy load of 16 threads with an outstanding queue of 16 per thread, and then tested in set intervals in multiple thread/queue depth profiles to show performance under light and heavy usage. Since hard drives reach their rated performance level very quickly, we only graph out the main sections of each test.

Our NAS Synthetic Workload Analysis includes four profiles based on real-world tasks. These profiles have been developed to make it easier to compare to our past benchmarks as well as widely-published values such as max 4k read and write speed and 8k 70/30, which is commonly used for NAS drives.

In the following section of this review, we will show the performance of both iSCSI and CIFS configurations of the HGST 6TB Deskstar NAS HDD. HGST supplied StorageReview with eight samples of their new HDDs, which we configured in RAID10 in a Synology DiskStation DS1815+.

The following drives are used as comparables in the same DS1815+ configuration:

In our first test measuring 4K random performance (CIFS), the HGST drive had the lowest write activity with 958 IOPS, but was the top performer in read functions with 618 IOPS. The WD Red Pro had the best performance in write functions with 2,382 IOPS.

The iSCSI throughput benchmark revealed the HGST HDD as the slowest in terms of write (850 IOPS), although it performed fairly well in terms of read (2,849 IOPS), placing second. The Seagate Enterprise HDD was the top performer in both read and write with 3,267 IOPS and 1,709 IOPS, respectively.

The results of the average latency benchmark (CIFS) were reflective of the throughput results; the HGST HDD had the fastest read performance (414.23ms) but the slowest write performance (267.08ms), while the WD Red Pro posted the best write numbers (107.42ms).

Average latency in iSCSI was similar to the results seen in the throughput benchmark; the HGST drive was the slowest in terms of write functions with 301.10ms, though it had a competitive read performance (89.83ms). The Seagate Enterprise HDD showed the best results in both read and write with 78.33ms and 149.81ms, respectively.

The notable standings for the max latency benchmark (CIFS) were identical to those of average latency; the HGST HDD performed the best in read functions (2,273.1ms) yet the highest in write functions (2,162.7ms). The WD Red Pro had the best write performance (914.01ms).

The HGST Deskstar NAS posted average results in the iSCSI configuration of the max latency benchmark, with 899.81ms and 1,504.4ms in read and write, respectively. The top performer for read functions was the WD Red Pro with 793.07ms, and the top drive in write was the Seagate Enterprise HDD with 1,271.5ms.

Our next test shifts focus from a pure 4K random read or write scenario to a mixed 8K 70/30 workload where we will show how performance scales in a setting from 2T/2Q up to 16T/16Q. In CIFS, the Seagate Enterprise HDD had the highest throughput, whereas the HGST drive ran at the rear of the pack through the duration of the benchmark. 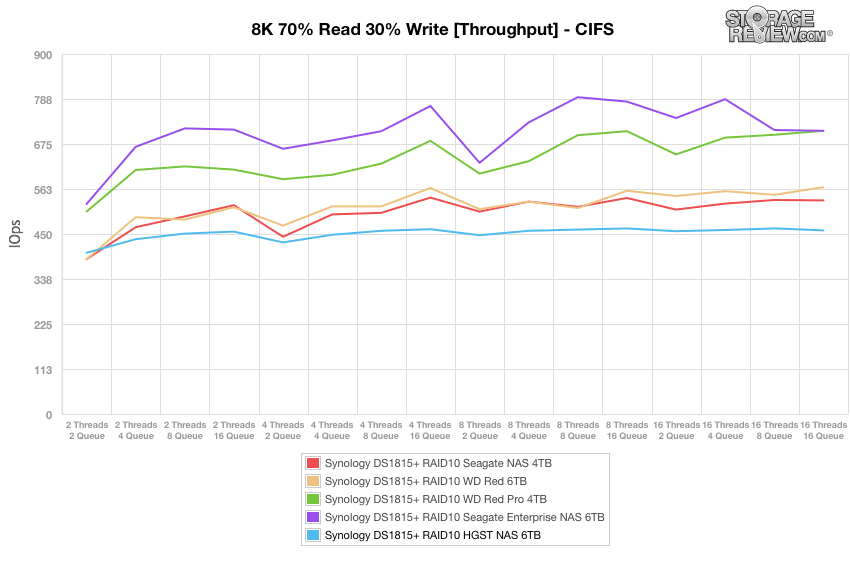 Although the HGST Deskstar NAS HDD started out in the top two (iSCSI), it finished out the benchmark as the third-fastest drive after the WD Red Pro HDD (second) and Seagate Enterprise NAS HDD (first). The Seagate NAS HDD was the slowest drive tested. 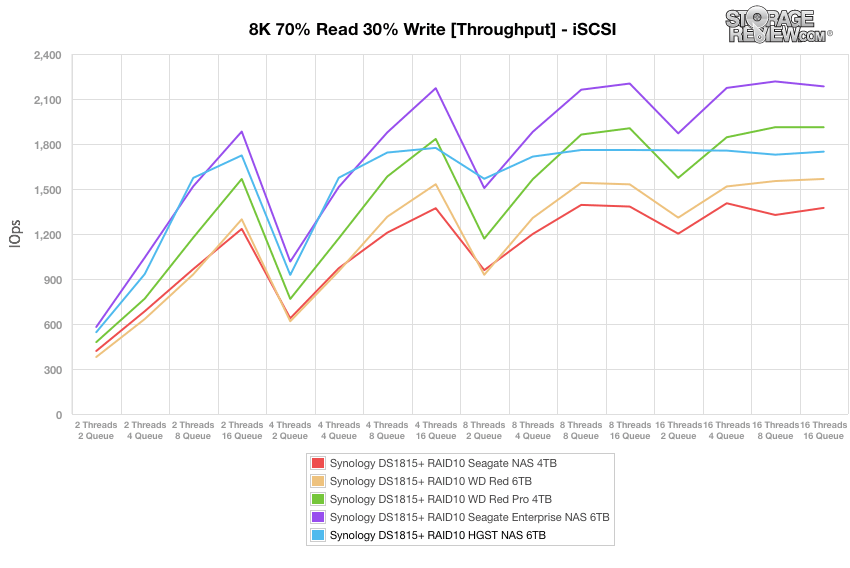 The Seagate Enterprise HDD was the top performer again in the CIFS configuration of the average latency benchmark, while the HGST Deskstar NAS drive had the highest latency. 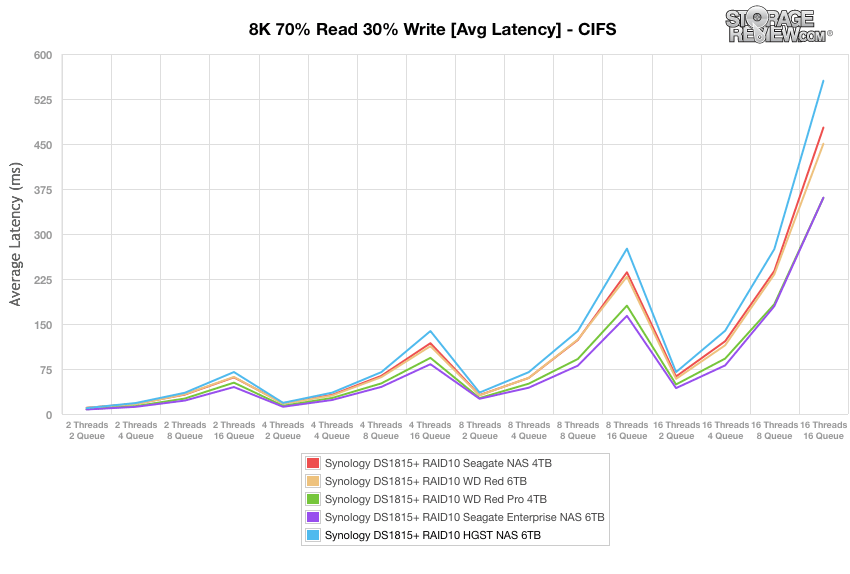 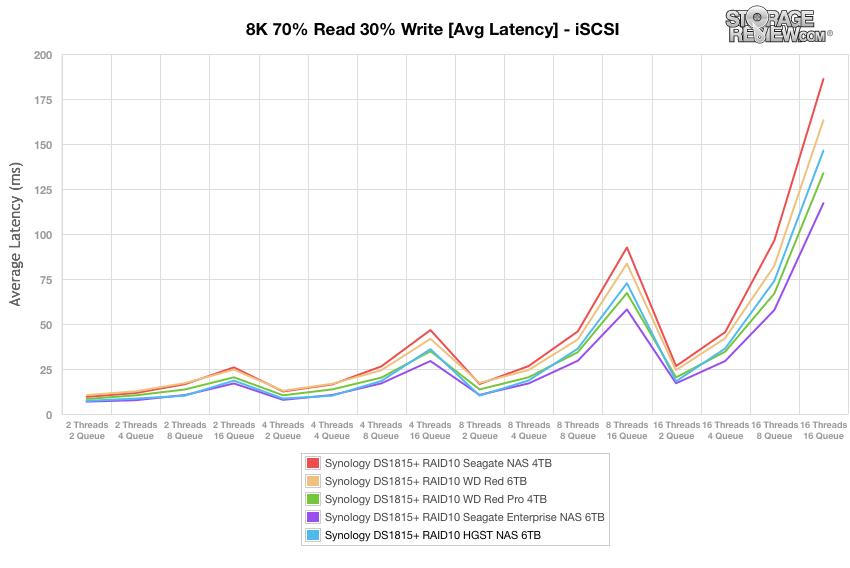 The results of the maximum latency benchmark (CIFS) were less straightforward than those of average latency, and the standings were notably different; the HGST Deskstar NAS HDD had both the lowest latency and the most consistent performance, while the Seagate Enterprise drive fell to second place. The Seagate NAS HDD and WD Red HDD were neck-and-neck for last place, but the latter ended up finishing the test as the slowest drive. 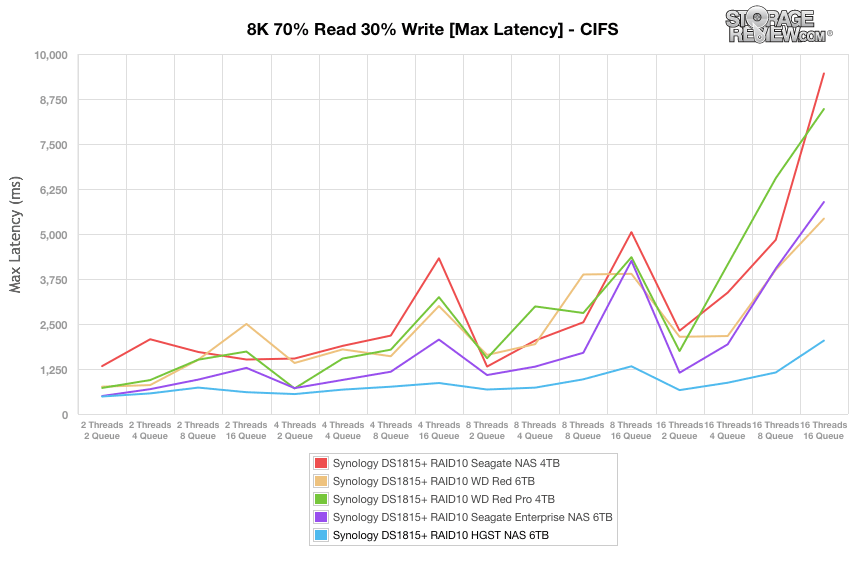 The iSCSI configuration of the maximum latency benchmark had erratic results, with the WD Red Pro HDD ultimately finishing out with the lowest latency, followed by the Seagate Enterprise NAS HDD. The HGST Deskstar NAS drive had the second-highest latency, and the Seagate NAS HDD had the overall highest latency (including a 18,000ms spike at 4 threads and 2 queue). 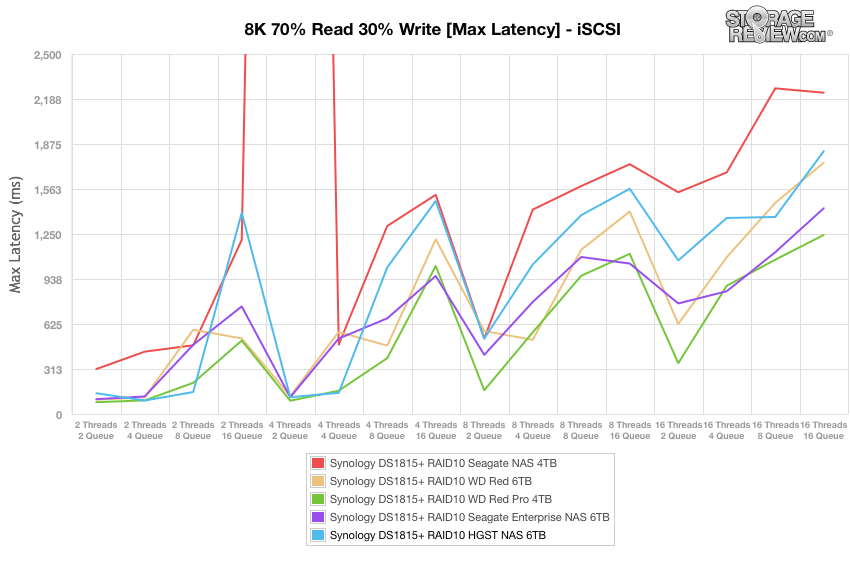 The standings of the standard deviation benchmark (CIFS) were very similar to the results of the max latency test; the HGST NAS HDD was the top performer followed by the Seagate Enterprise NAS HDD, and the Seagate NAS HDD and WD Red Pro HDD were last and second-to-last, respectively (although the WD Red Pro and WD Red were neck-and-neck through the majority of the benchmark). 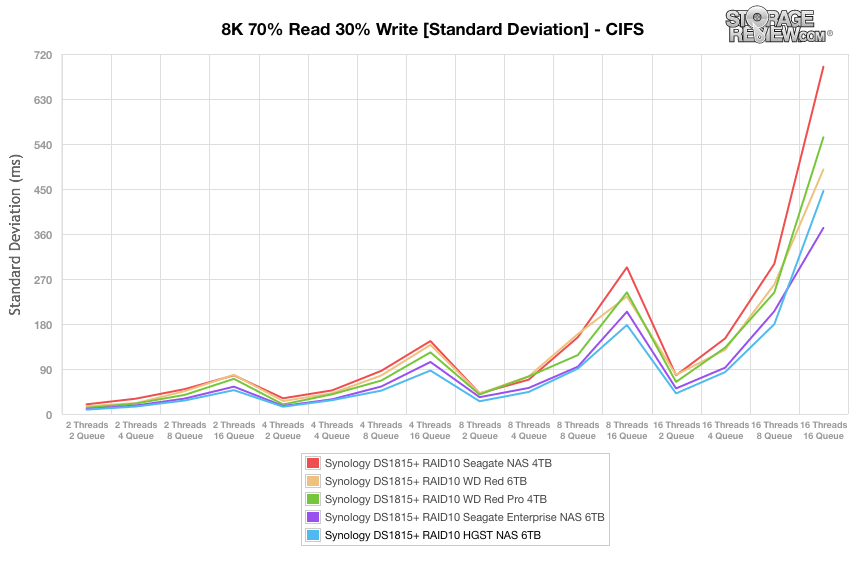 The WD Red Pro HDD and Seagate Enterprise NAS HDD were again the main contenders in the iSCSI configuration of the standard deviation benchmark. The WD Red HDD and HGST NAS HDD ended with similar standard deviations, and the Seagate NAS HDD was well defined as the least consistent drive tested. 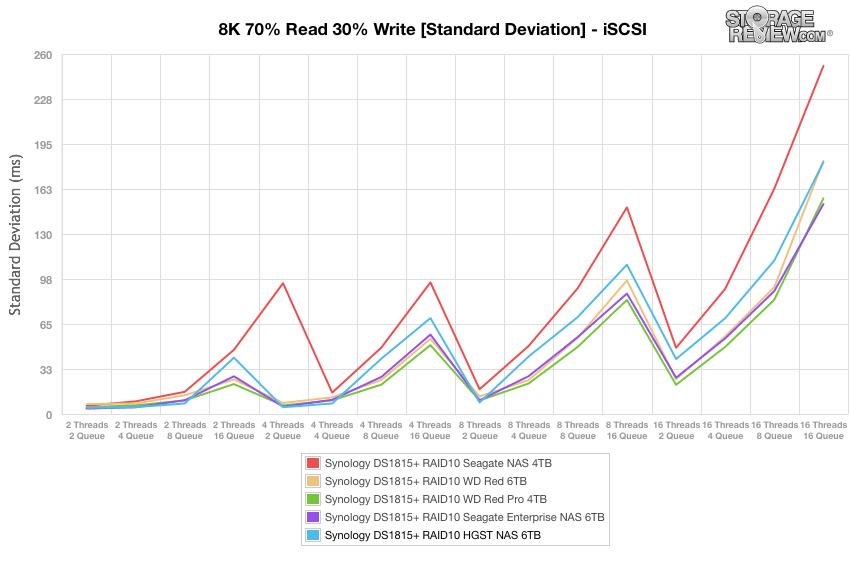 While the first part of the workload comparison focused on random workload performance, our second half measures small and large-block sequential transfer speeds. In our CIFS file-level test of the 8k 100% read/write benchmark, the HGST posted the highest numbers in both read and write functions with 52,326 IOPS and 45,148 IOPS, respectively. The next-best read performer was the Seagate NAS HDD (51,623 IOPS), and the next-best write performer was the WD Red HDD (44,441 IOPS).

The iSCSI configuration of the 8k sequential workload benchmark showed larger margins between drives. The HGST NAS HDD had a write performance of 23,455 IOPS but posted the lowest read speed with 4,490 IOPS. The Seagate Enterprise NAS HDD had the highest numbers in both read and write with 9,324 IOPS and 26,056 IOPS, respectively.

Our last test is the 128k benchmark, which is a large block sequential test that shows the highest sequential transfer speed. The results were inconclusive for the most part in the CIFS configuration of the large block benchmark; at most, the drives varied by less than 50KB/s in read functions and 8,000KB/s in write functions. That being said, the HGST Deskstar NAS HDD had the highest read (462,871KB/s) and an average write bandwidth (441,976KB/s). The top drive for write functions was the WD Red with 445,813KB/s.

The iSCSI configuration of the 128k test had more significant margins for write functions, but small margins for read functions. The HGST Deskstar NAS HDD posted a competitive performance in both read and write with 184,434KB/s and 342,289KB/s, respectively putting it in the middle of the pack. The WD Red had the highest write bandwidth with 383,843KB/s and the Seagate Enterprise NAS HDD had the highest read bandwidth with 193,920KB/s.

HGST's newest installment of their Deskstar NAS line expands their maximum capacity for NAS drives to 6TB, a welcome gain over the prior 4TB cap. HGST maintained the line's 7,200RPM spindle speed and vibration sensor (RVS), which was included to optimize operation despite peripheral vibrations from neighboring drives. These drives could be utilized well in small enterprise, SOHO, or consumer environments in which up to eight drive bays are being used.

The 6TB NAS drive posted good numbers for the most part, excelling in 4k read functions, mixed 8k latency and consistency, and sequential 8k (CIFS). It also posted fairly good numbers in the large block benchmark, though it struggled with the sequential 8k and most of the mixed 8k tests configured in iSCSI. It also fell behind in write functions in most of the 4k tests. It seems to be better suited for CIFS environments except for some specific scenarios. In most small footprint NAS environments these differences won't be felt, but for workgroups or larger user counts the performance delta may be more noticeable.

The new 6TB HGST Deskstar NAS HDD provides stability in multi-bay NAS systems, providing 2TB more than their prior top-capacity offering. The drives post competitive numbers when configured in CIFS and are well-suited to the needs of small NAS environments where capacity needs trump most else.