The EcoFlow DELTA 2 portable power station is a highly capable and powerful solution for those who need reliable backup power on the go. With a battery capacity of 1024Wh and peak inverter output of up to 1800W, the DELTA 2 can power a variety of IT hardware and small clusters for a period of time. One of the biggest changes though for the 2nd generation DELTA series is the move to LiFePO4 battery technology, which has a much longer lifespan than prior chemistries.

The EcoFlow DELTA 2 portable power station is a highly capable and powerful solution for those who need reliable backup power on the go. With a battery capacity of 1024Wh and peak inverter output of up to 1800W, the DELTA 2 can power a variety of IT hardware and small clusters for a period of time. One of the biggest changes though for the 2nd generation DELTA series is the move to LiFePO4 battery technology, which has a much longer lifespan than prior chemistries. 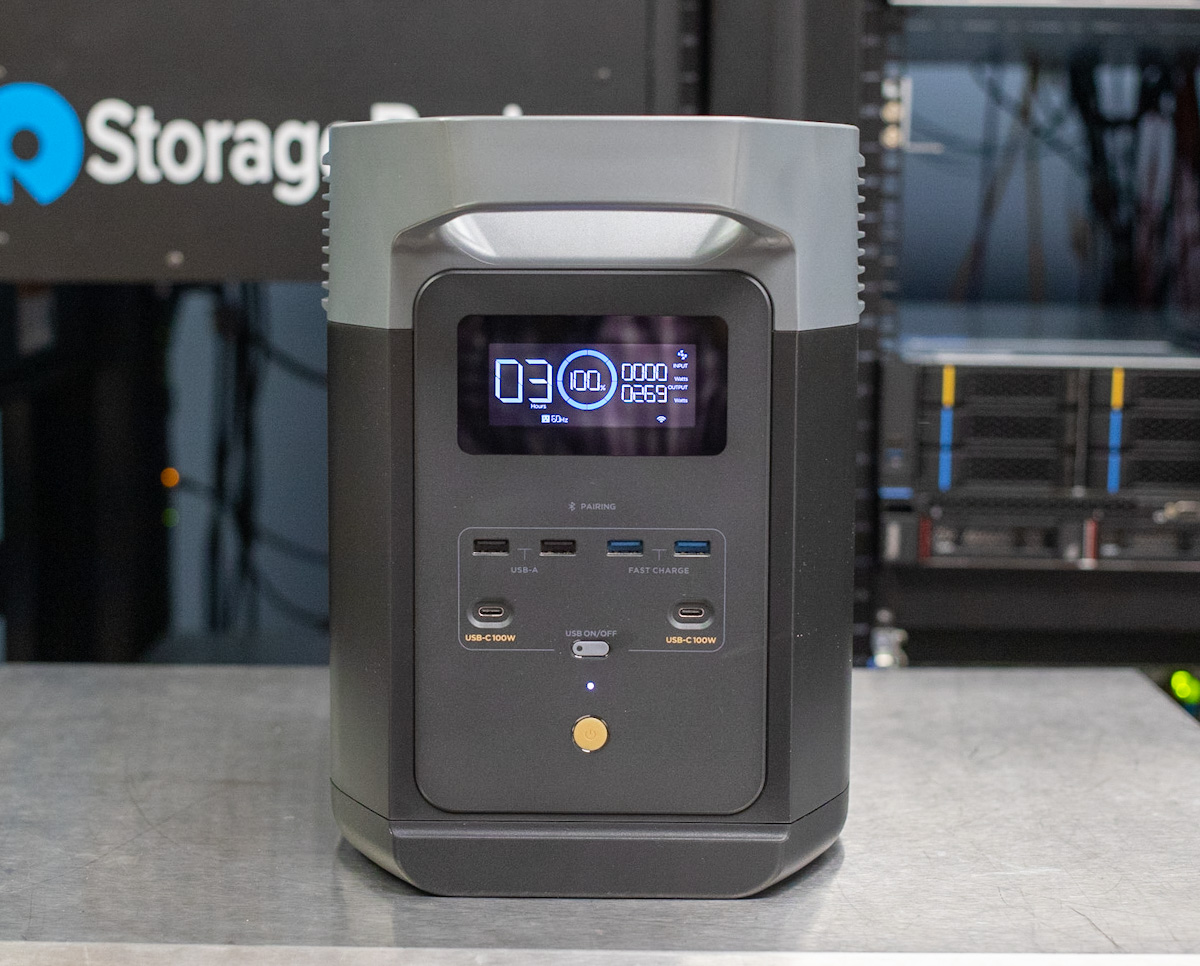 The DELTA 2 can be charged in a variety of ways, including AC charging at 1200W, solar charging at up to 500W, and car charging at up to 8A. It also supports DC charging at 1100W through EcoFlow’s Smart Generator. Another standout feature of the DELTA 2 is its ability to support an extra DELTA 2 or DELTA Max battery, allowing users to extend its runtime even further. This enables longer backup capabilities as an emergency power supply in case of grid outages or unstable power service. With its ability to auto-switch to battery power, the DELTA 2 allows devices will continue to run during inclement weather or other emergency situations. 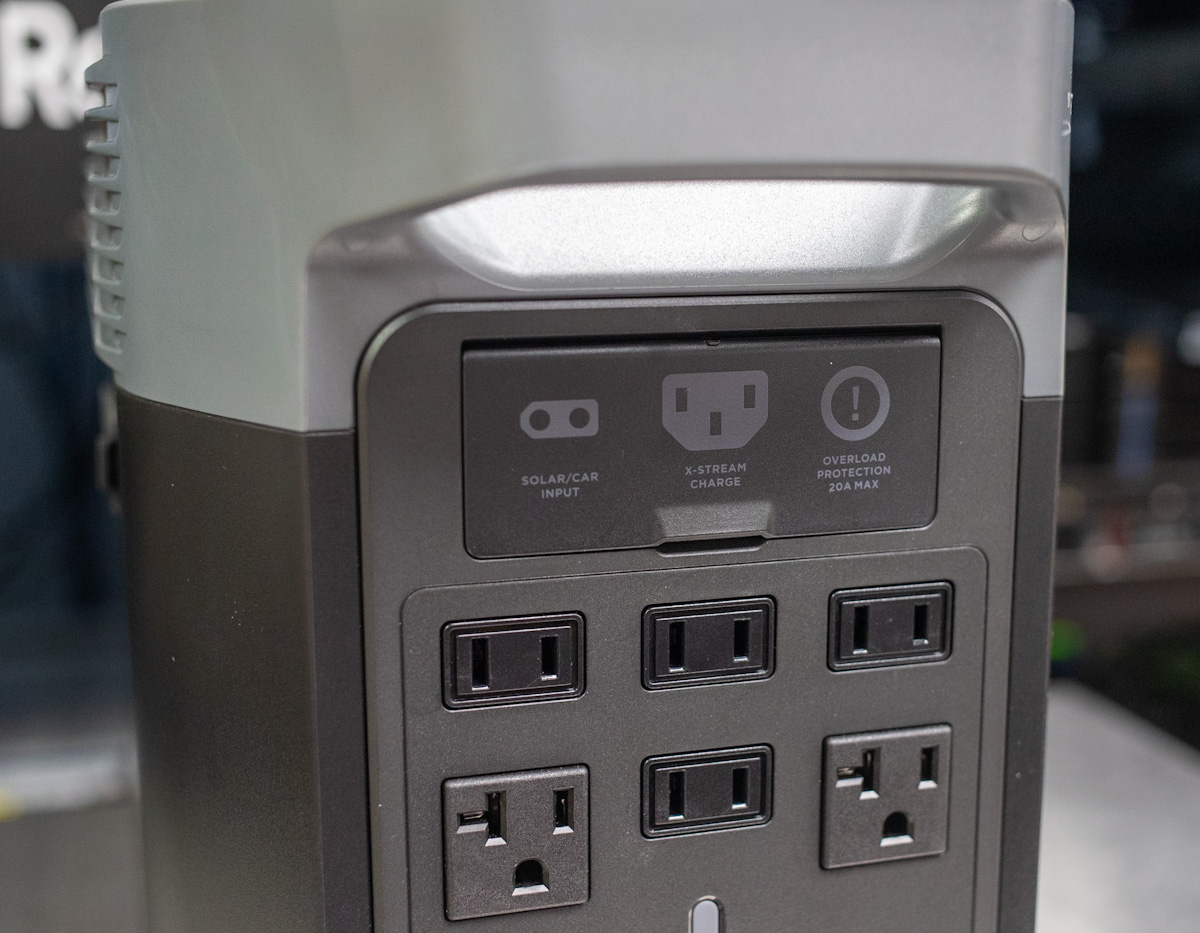 In terms of charging capabilities, the EcoFlow DELTA 2 (as well as other EcoFlow models) do it right with onboard AC chargers. It keeps miscellaneous accessories to a minimum when you are bringing hardware with you in the field and also has advantages for charging speed. 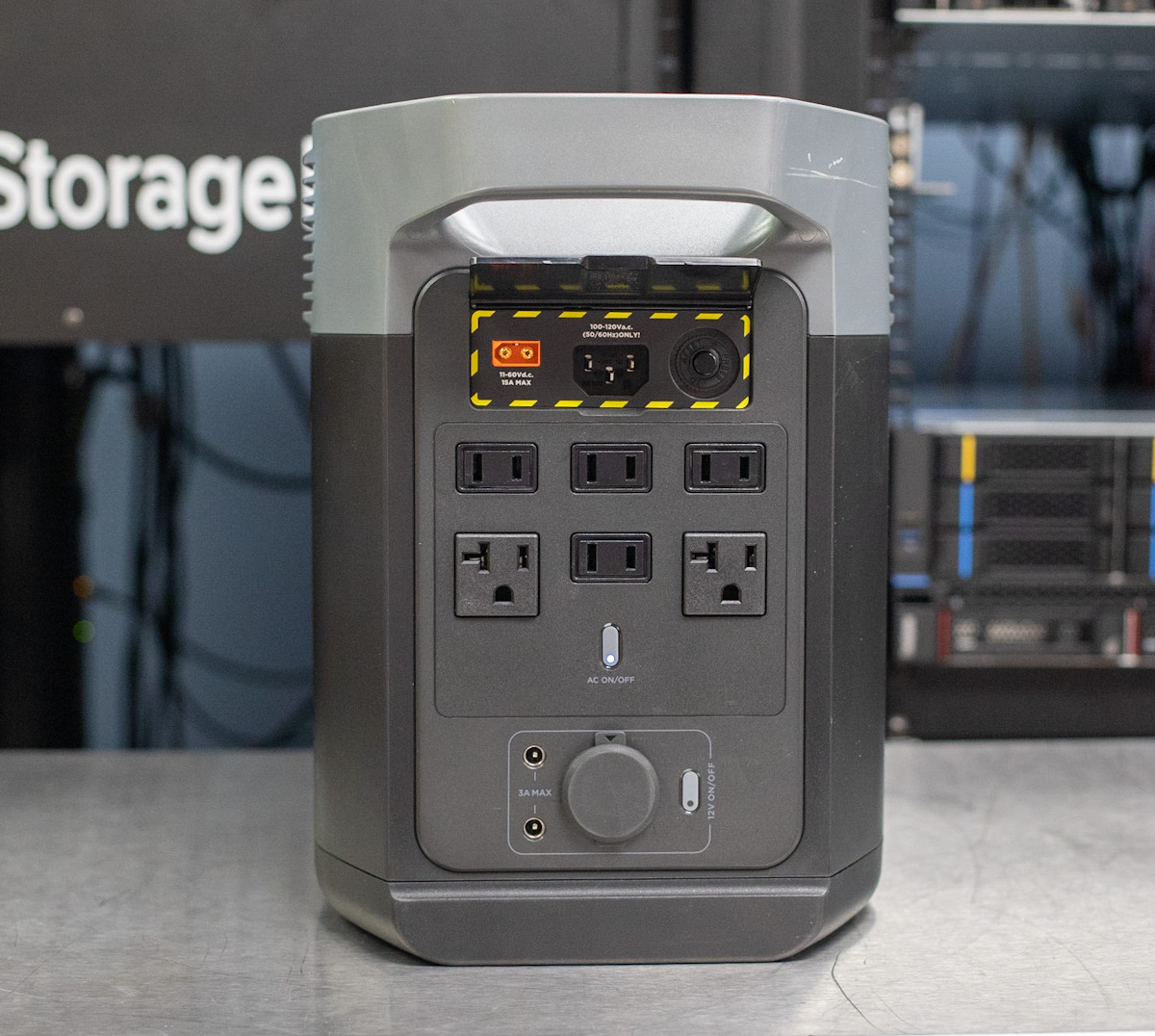 The DELTA 2 can draw 1200W from the wall, which minimizes the time needed to recharge. It also uses the standard C13 power plug which is one used commonly with computer hardware, versus a proprietary connector. The advantage here is if you lose the cable that shipped with the unit, you can just share it with another device that uses the same connection.

In terms of power capabilities, the DELTA 2 has a wide range of AC output options, with six outlets that can handle up to 1800W of power (with a surge capacity of 2700W). This means it can power multiple devices at once, including high-powered devices like servers, workstations, or power tools. Plus, with the X-Boost function, users can boost the power output up to 2200W to support even more demanding devices.

In addition to its AC output, the DELTA 2 also supports charging USB-connected hardware. There are two standard USB-A ports, as well as two USB-A Fast Charge ports that support faster charging speeds for compatible devices. There are two USB-C ports with a maximum output of 100W to charge notebooks without needing to activate the AC power inverter.

The EcoFlow DELTA 2 is shipping now with a street price of $899 at Amazon.

A key difference between NCM and iron phosphate batteries is their energy density. NCM batteries have a higher energy density, meaning that they can store more energy in a given volume or weight. This makes them more suitable for applications that require a high amount of energy in a small space. LiFePO4 batteries, on the other hand, have a lower energy density, although they trade that with certain advantages.

LiFePO4 batteries are also considered to be safer than their NCM counterparts. This is because iron phosphate batteries have a lower operating temperature, which reduces the risk of overheating and thermal runaway. Additionally, iron phosphate batteries are less likely to catch fire if they are damaged or mishandled, making them a safer choice for applications where safety is a concern. One of the biggest advantages though is lifespan, where the recharge cycles of a newer LiFePO4 can be 3,000 or more cycles, compared to 800 cycles from NCM.

Overall, NCM and iron phosphate batteries are both useful for different applications, although in terms of the portable power station market many vendors are switching to LiFePO4 for greater durability. This is seen as a huge win for customers where the rated lifespan is significantly increased and we’re seeing longer warranties offered as a result.

A big benefit of the EcoFlow ecosystem is the well-designed app offered for both iOS and Android. It allows users to monitor and manage the status of their portable power stations and related equipment in real time. This includes information such as the current battery level, the amount of power being drawn from the station, and or even the temperature of the battery.

Another benefit of the EcoFlow iOS app is that it provides users with the ability to customize the settings of their equipment. This includes setting the charging mode, adjusting the power output, and or even adjusting charge/discharge ranges. The DELTA 2 itself has gotten a bit of a makeover in the app with its graphical presentation, although the same information presented on the older DELTA series is still brought forward, as well as the same settings.

We did trouble updating the firmware on the Delta 2 in our lab, although Bluetooth connectivity for direct access worked quite well. Moving the Delta 2 to a different location resolved the update problem and allowed it to proceed, meaning it could have been a DNS issue. After the unit was up to the current firmware the WiFi interaction speed improved dramatically. The local controls on the unit itself were also nice, instead of focusing on touchscreen-only controls for turning on DC, USB, or AC power ports.

The EcoFlow DELTA 2 can support loads up to 1800W, making it ideal for powering high-powered equipment such as servers, networking switches, and crash carts. While the battery capacity is limited to just over 1kWh, the unit can be expanded with an additional battery for added runtime. This makes it a valuable tool for use in a lab setting, where it can provide a reliable source of power in the event of an outage or moving hardware around while still keeping equipment online. 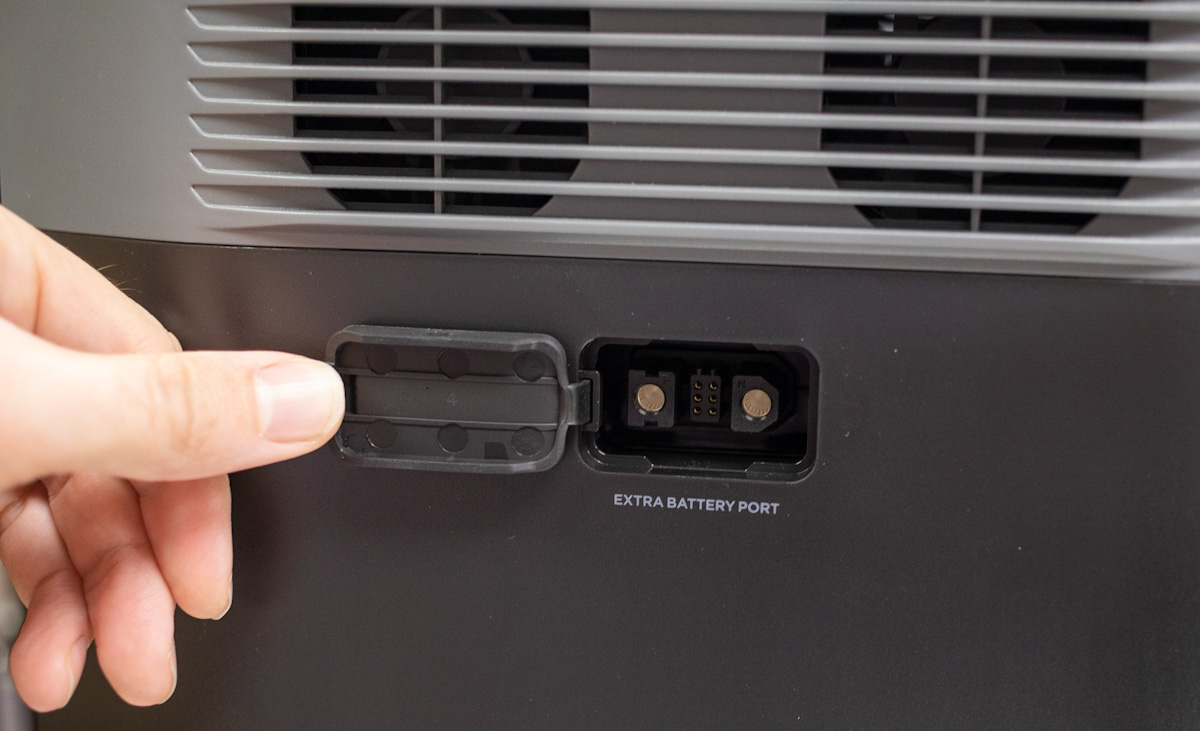 Measuring the actual capacity of the EcoFlow DELTA 2, we put it through a charge and discharge test. In our discharge test with a 270W load applied to the DELTA 2, we measured a total power output of 0.85kWh. In this case, the efficiency of the EcoFlow DELTA 2 would be 83.3% (850 / 1024). This means that out of the total energy that the battery is capable of storing, 83.3% of it can be used to power devices. When bringing the DELTA 2 back up to 100% when fully depleted, it used 1.22kWh of power.

To put the discharge measurement a little differently, we’ve also measured the power needed to both cook a pizza and make a cup of coffee in the StorageReview lab. With an electric pizza oven, we’ve previously recorded that the amount of power needed to bring a standard pizza from refrigerated to crispy needs 0.2kWh of energy. Comparing this to the DELTA 2 in our lab, we’d be able to cook just over 4 pizzas (or make 4 extra crispy). Another metric is the power needed to make a cup of coffee with a single-serve Keurig coffee maker. Here we needed 0.03kWh of power, meaning the EcoFlow DELTA 2 is able to make just over 28 cups of coffee.

One factor that can affect the efficiency of a portable power station is the use of its AC inverter. This is the component that converts DC power from a battery into AC power. However, this conversion process is not 100% efficient, and some of the energy from the battery is lost during the conversion. Leveraging the USB-C ports or DC output from the portable power station would yield better results since it doesn’t have the overhead associated with the AC inverter. 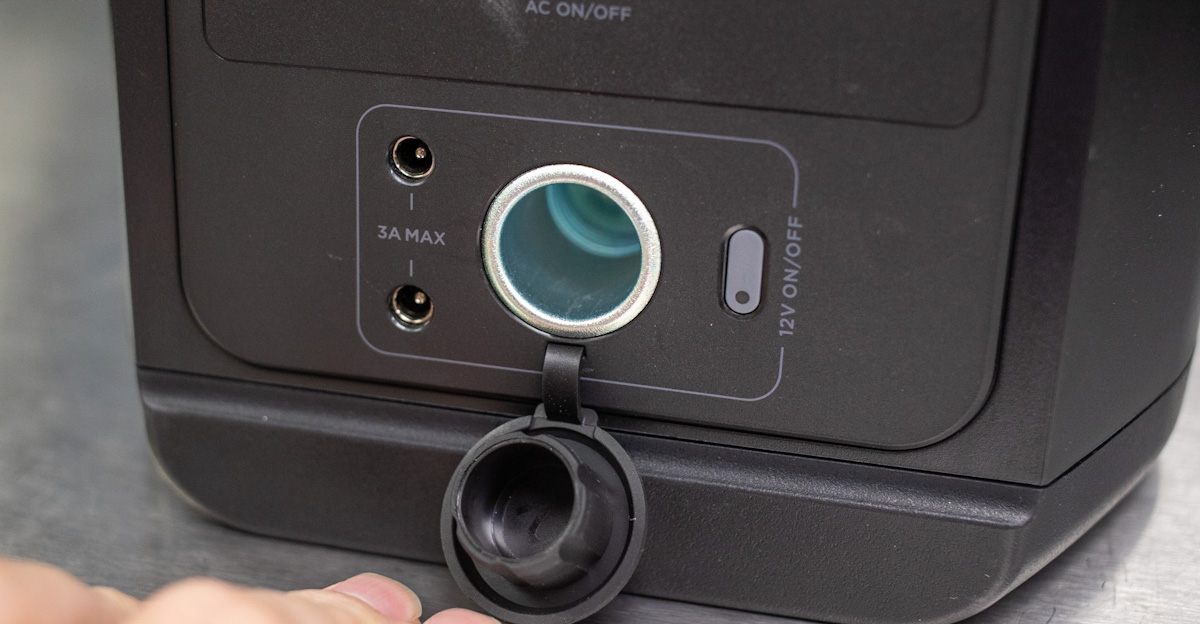 With the car power plug and associated bullet connectors, the DELTA 2 also offers additional ways to tap into DC power directly. Having direct DC outputs for 12V hardware allows you to connect devices that run on 12V power directly to the portable power station without the need for additional power adapters or transformers. This can be useful in the field as carrying a connection cable can be dramatically more compact than a power adapter to step down 120V AC power.

The EcoFlow DELTA 2 is a portable power station designed for reliable backup power on the go. With a battery capacity of 1024Wh and peak inverter output of up to 1800W, the DELTA 2 can power a variety of IT hardware for an extended period of time. It uses LiFePO4 battery technology, which has a longer lifespan than other chemistries and is safer, with a lower risk of thermal runaway.

The DELTA 2 can be charged in several ways, including AC, solar, and car charging, and supports DC charging through EcoFlow’s Smart Generator. It also has the ability to support an extra DELTA 2 or DELTA Max battery, allowing users to extend its runtime even further. The DELTA 2 has a wide range of AC output options and can charge USB-connected hardware. 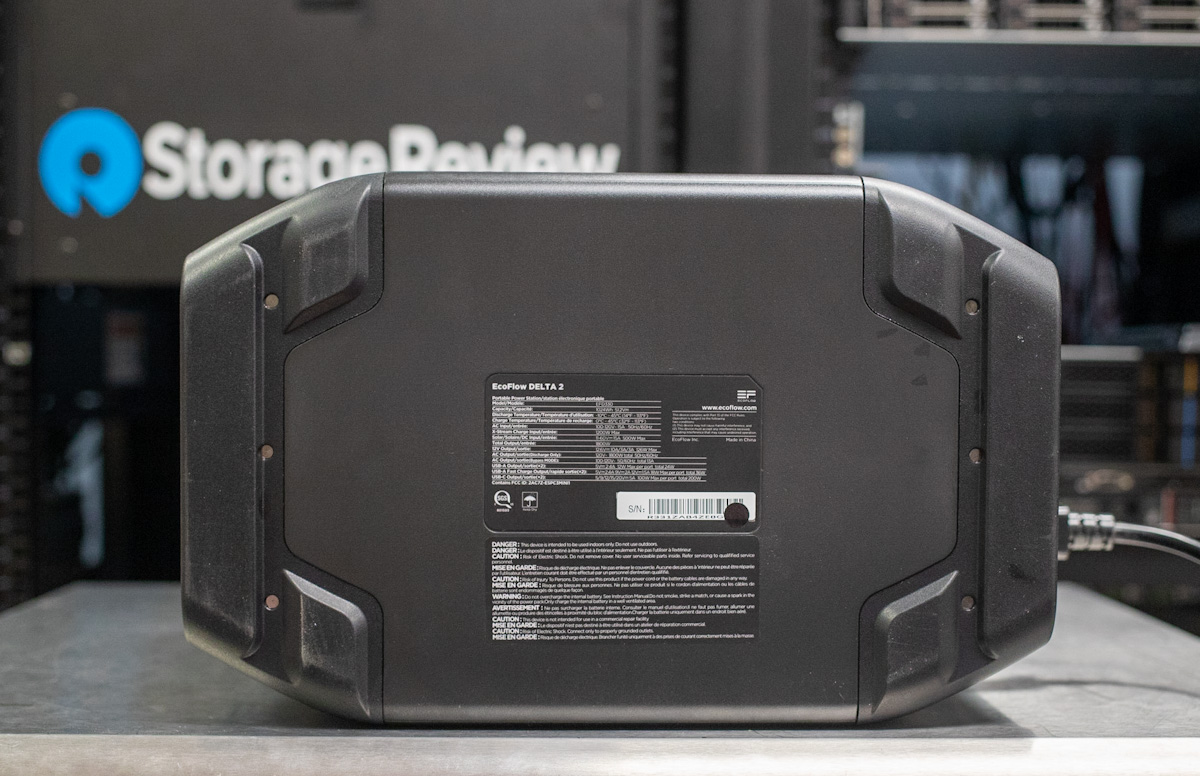 In our discharge test with a 270W load applied to the DELTA 2, we measured a total power output of 0.85kWh. In this case, the efficiency of the EcoFlow DELTA 2 would be 83.3%. Charging back to 100% when fully depleted, it used 1.22kWh of power.

Overall EcoFlow continues to make great products with an app integration that works well and adds value, something that’s not always the case in this category. While we don’t wish for power outages in the lab or during some of our remote testing, knowing we have kit like this around, for even impromptu needs, is a nice feeling.