The GIGABYTE R282-Z92 Server is a new 2U dual-socket server that leverages the 2nd generation AMD EPYC processors. Being dual-socket, meaning that users can leverage up to 128 cores (64 per socket) with two EPYC CPUs. AMD EPYC processors also lend the added benefit of PCIe 4.0 devices which increase options for faster storage, FPGAs, and GPUs. The server comes with two open PCIe 4.0 expansion slots to support add-on items.

The GIGABYTE R282-Z92 Server is a new 2U dual-socket server that leverages the 2nd generation AMD EPYC processors. Being dual-socket, meaning that users can leverage up to 128 cores (64 per socket) with two EPYC CPUs. AMD EPYC processors also lend the added benefit of PCIe 4.0 devices which increase options for faster storage, FPGAs, and GPUs. The server comes with two open PCIe 4.0 expansion slots to support add-on items. 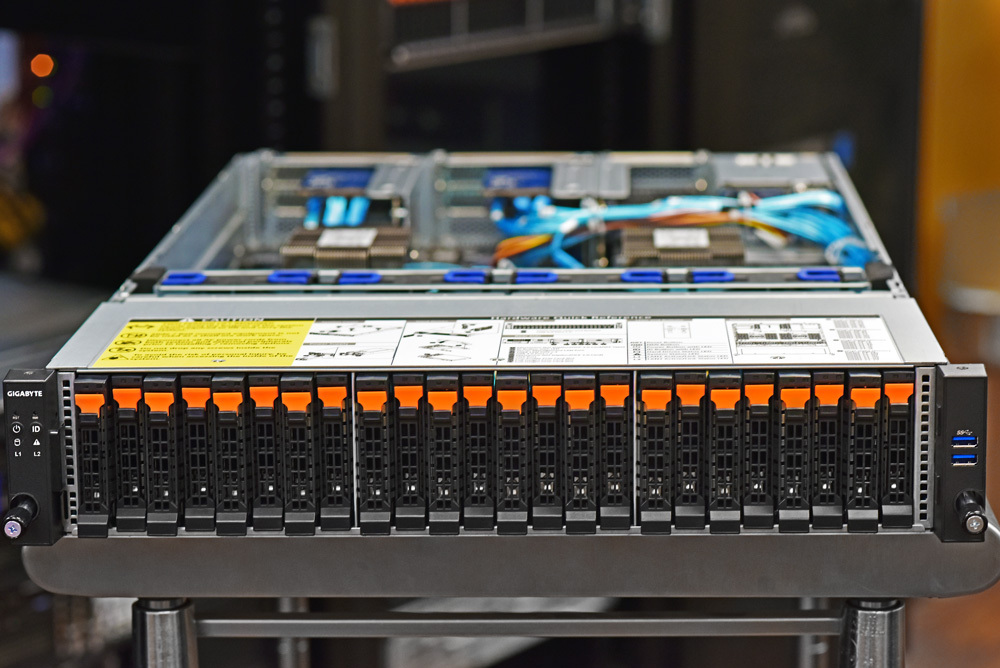 Further building off of the new AMD EPYC processors, the GIGABYTE R282-Z92 Server supports over 4TB of DDR4 memory with speeds up to 3200MHz. It can hit this through 16 DIMMs per CPU with module support up to 128GB apiece. While the server supports NVMe storage via 24 hot-swappable bays across the front (not to mention two more bays in the back for SATA/SAS storage), it doesn’t support PCIe 4.0 in the front bays.

Other notable hardware features are an onboard M.2 slot as well as more M.2 capacity through a riser card. The server comes with two 1GbE LAN ports but plenty of expansion for faster networking, including an OCP card slot. Power management is done through two hot-swappable PSUs as well as GIGABYTE’s intelligent power management features that both makes the server more efficient in terms of power usage and retain power in the case of a failure.

The R282-Z92 leverages its own GSM for management, here is a deeper dive into the GUI. GSM comes with a VMware plugin allowing users to use vCenter for both remote monitoring and management.

The GIGABYTE R282-Z92 is a 2U server that has a very similar appearance to other GIGABYTE servers (metal frame, black drive bays with orange highlights, black front). Across the front of the device are the twenty-four 2.5” PCIe Gen3 bays that take up most of the front. On the left side is the power button, ID button, reset button, NMI button, and LEDs (System status, HDD activity, and LAN activity). On the right side are the two USB 3.0 ports. 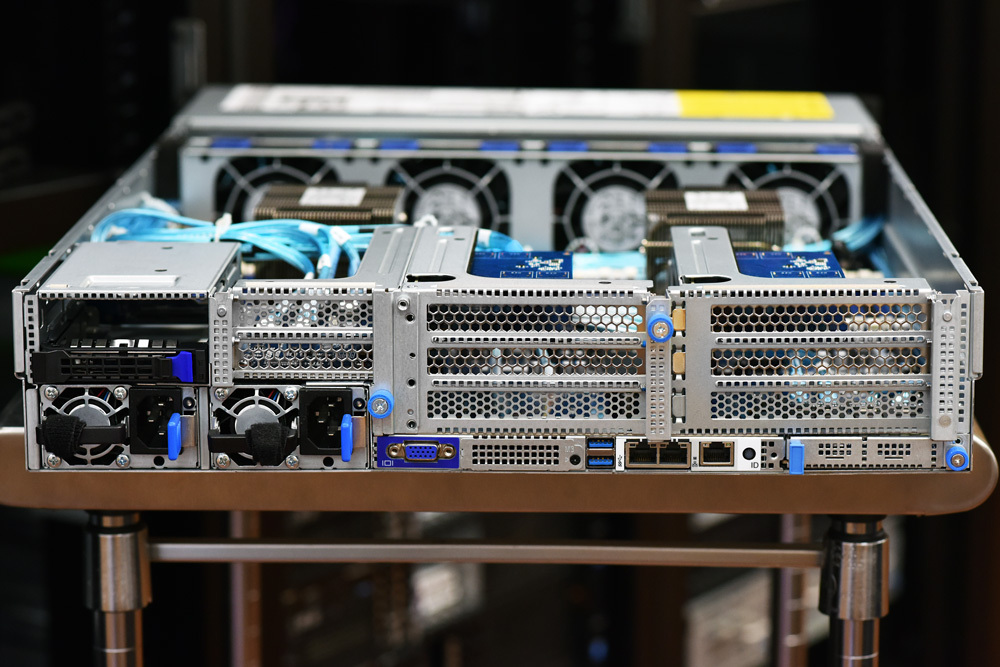 On the rear, we see two more 2.5” hot-swap bays (for either SATA or SAS, HDD/SSD) on the left upper corner and two PSU beneath. Eight expansion slots take up a majority of the rest. Running across the bottom are two USB 3.0 ports, two 1GbE LAN ports, and one MLAN port. 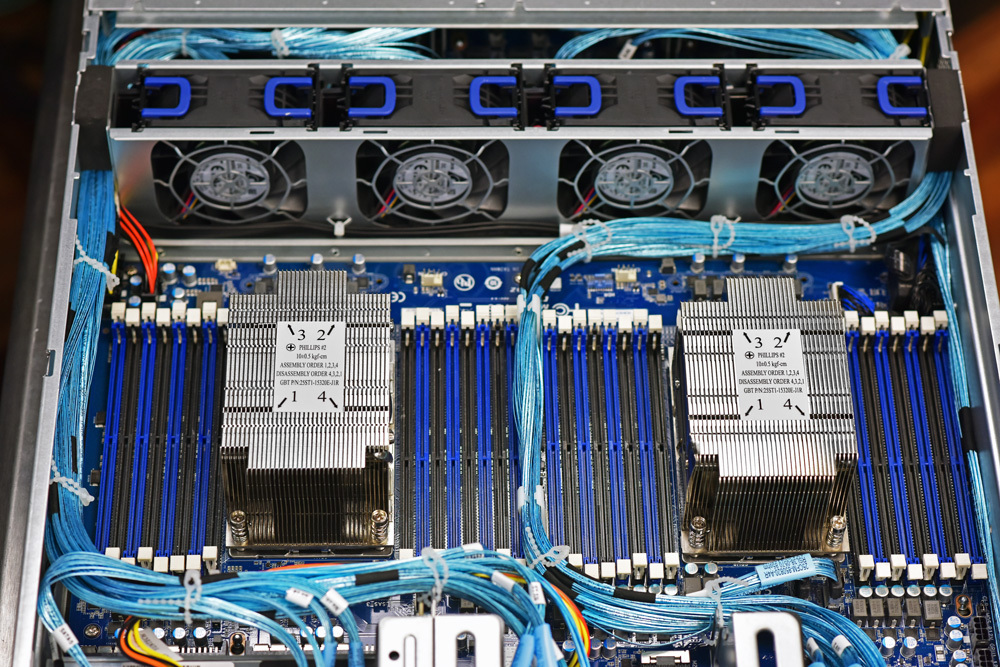 Popping off the top we can see the fans near the front followed by the CPUs and the RAM slots. Near the back is the M.2 slot for boot duty.

For 64K write the server started at 65µs and stayed under 1ms until it went close to peak that was about 255K IOPS or 15.9GB/s at 739µs before dropping off some.

The GIGABYTE R282-Z92 is a dual-socket, 2U server that leverages the second-generation AMD EPYC processors and most of the benefits that come with them. Outfitting the server with two 64-core CPUs gives users up to 128 cores total. On top of that, one can leverage over 4TB of DDR4 RAM with speeds up to 3200MHz (16 DIMMS per CPU for a total of 32 with support for up to 128GB per slot). The EPYC lends PCIe 4.0 support for new storage options, FPGAs, GPUs, and OCP 3.0. For capacity storage, the server has 24 2.5” NVMe Gen3 bays across the front, two 2.5” SAS/SATA bays on the back, and an onboard M.2 slot. In terms of expansion, our configuration leaves two PCIe Gen4 slots open, along with the OCP slot. The rest of the PCIe slots are used for the adapter cards to support the NVMe drive bays in front.

Overall the GIGABYTE R282-Z92 is a robust platform with impressive storage density, leveraging 24 bays in the front, two in the back, and an onboard M.2 slot for boot. There are two letdowns primarily from a storage perspective. First is that GIGABYTE uses up five of the expansion slots for NVMe cards, which limits expansion options. Second, they don’t support PCIe Gen4 in the front bays. There are two Gen4 slots open in the back still, which allows for a little bit of I/O, storage, or GPU expansion if needed. On the Gen4 SSD front, there aren’t a lot of options there yet, but Gen4 is the future and a worthy investment, so we’d be happier to see it supported here, but if you really need the latest SSDs, then you’re not considering this particular server anyway. That said, the system screams as-is.

What we have in this platform is an amazing amount of computational power in 2U. We saw a really nice performance profile, with just 12 NVMe SSDs, and we only capped CPU in a single workload, meaning there’s more to give. Even so, we hit some nice hero numbers of 7 million 4K IOPS and 40GB/s 64K read. AMD has done a really great job with their second-generation EPYC CPUs and this platform does well to harness those 128 cores.