The Synology DiskStation DS1520+ is a 5-bay NAS designed for small offices, enthusiasts, or home users looking for a data management solution. The DS1520+ is highlighted by dual internal M.2 SSD slots so users can leverage Synology’s SSD Cache technology, which will significantly improve overall system I/O and application performance. Synology’s new DiskStation also scales as storage needs grow, allowing users to increase its capacity via the Synology DX517 (adding up to ten additional bays) for a maximum raw capacity of 240TB (or 108TB maximum single volume size). This makes the DS1520+ an ideal personal cloud solution for those with a growing data need.

The Synology DiskStation DS1520+ is a 5-bay NAS designed for small offices, enthusiasts, or home users looking for a data management solution. The DS1520+ is highlighted by dual internal M.2 SSD slots so users can leverage Synology’s SSD Cache technology, which will significantly improve overall system I/O and application performance. Synology’s new DiskStation also scales as storage needs grow, allowing users to increase its capacity via the Synology DX517 (adding up to ten additional bays) for a maximum raw capacity of 240TB (or 108TB maximum single volume size). This makes the DS1520+ an ideal personal cloud solution for those with a growing data need. 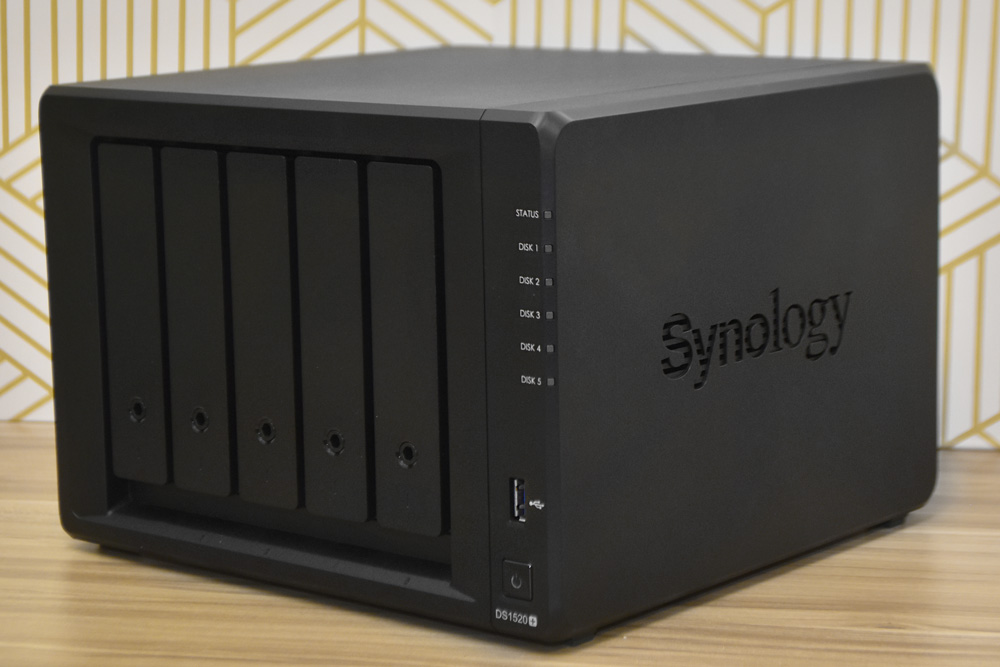 Backed by a 3-year warranty (which can be extended to 5 years in select regions), the diskless version of the Synology DiskStation DS1520+ goes for roughly $700.

The Synology DiskStation DS1520+ is a medium-sized home office NAS that is meant to sit next to a workstation or somewhere nearby. It sports the usual black design from Synology’s Plus series, with the five 3.5” drive bays taking up a front panel’s real estate. On the right side are the indicator lights, USB 3.0 port, and power button. The sides of the NAS have Synology branding, which is also used as ventilation. 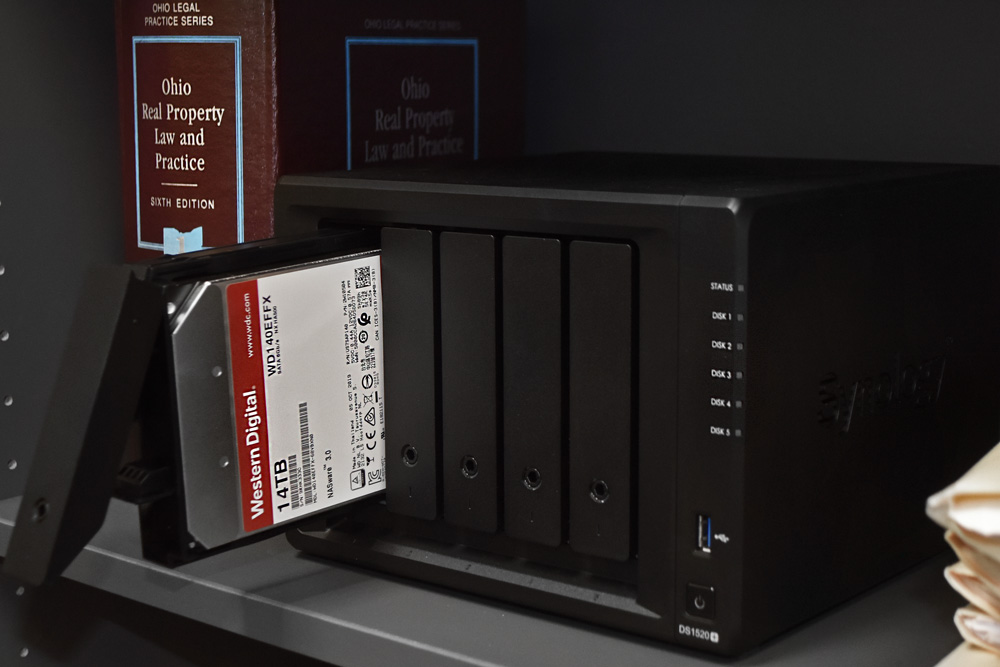 Turning the NAS around to the back panel reveals the dual system fans, which run along the top, taking up about two-thirds of available real estate. Below is the rest of the connectivity and functionality: four 1GbE RJ-45 ports, a reset button, two eSATA ports, the power port, a USB 3.0 port, and the Kensington Security slot. Sadly, this is where features found on the previous model vanish.

The DS1517+ offered an integrated power supply, whereas the new DS1520+ uses a large power brick. Another high-performance item missing is the optional PCIe slot, which in prior years could be leveraged to add 10GbE support. With the DS1520+, you gain NVMe SSD slots for the cache but are limited to 400MB/s in and out of the box with the quad 1GbE as the limiting factor. 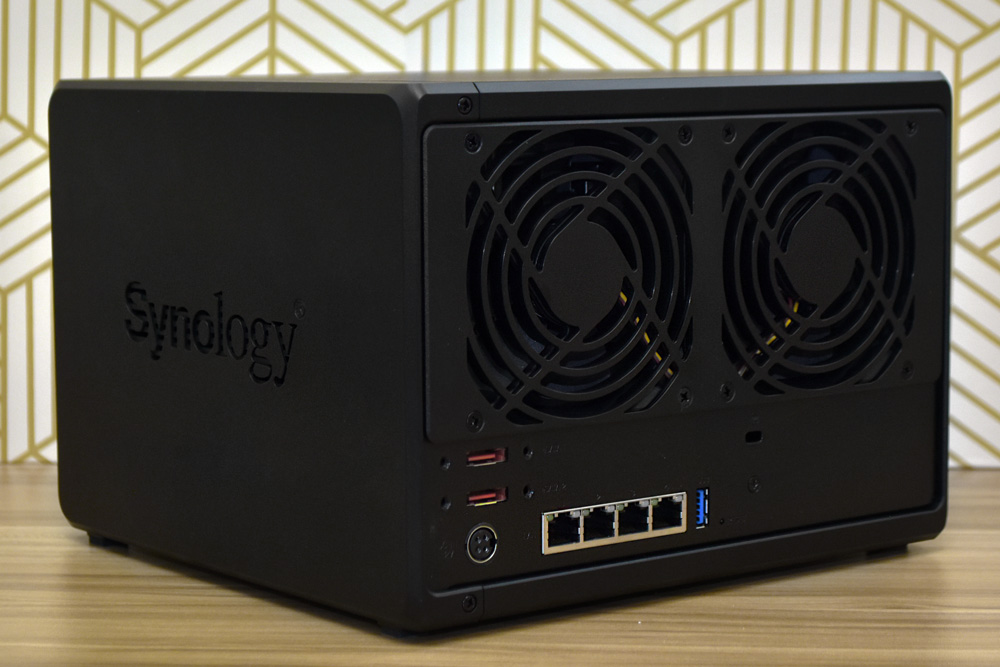 Accessing the dual M.2 NVMe SSDs was fairly simple. Simply flip it so the bottom is up, pop out the two covers, and slide the SSDs in. This platform supports the standard 80mm drive length. 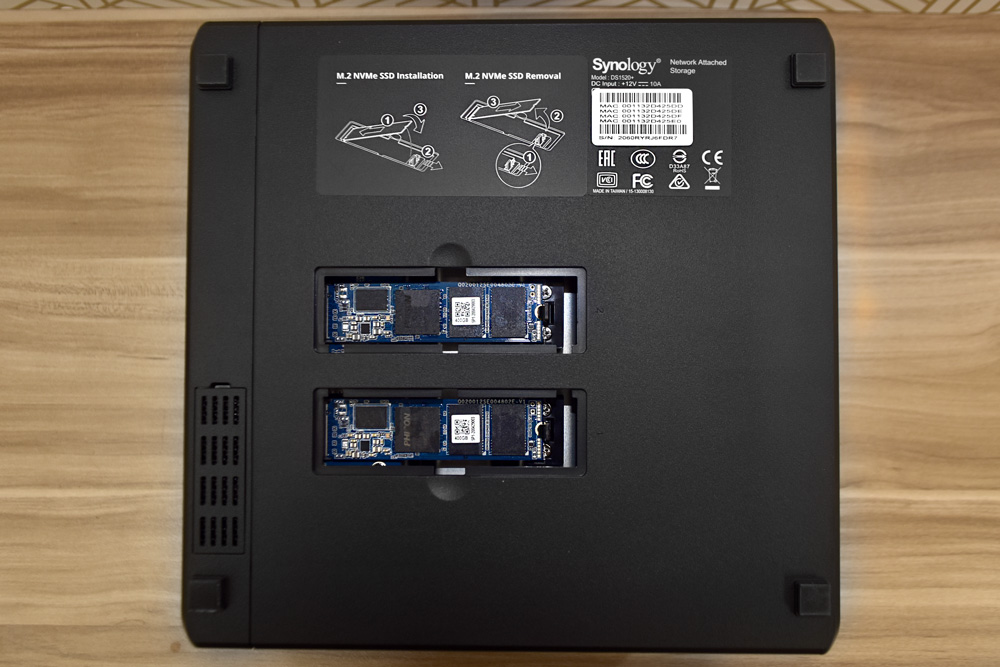 For our testing, we configured the Synology DiskStation DS1520+ in RAID6 using five WD Red 14TB HDDs. For the cache, we used Synology’s SNV3400-400G SSDs. 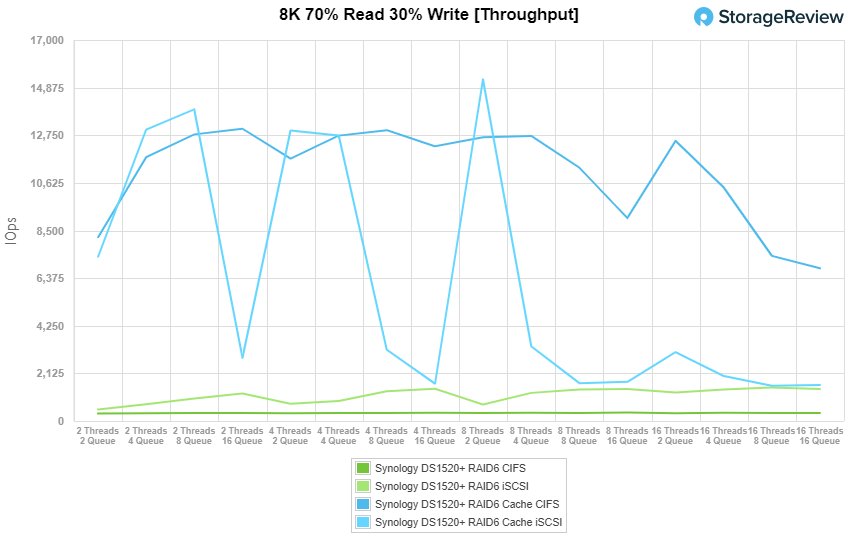 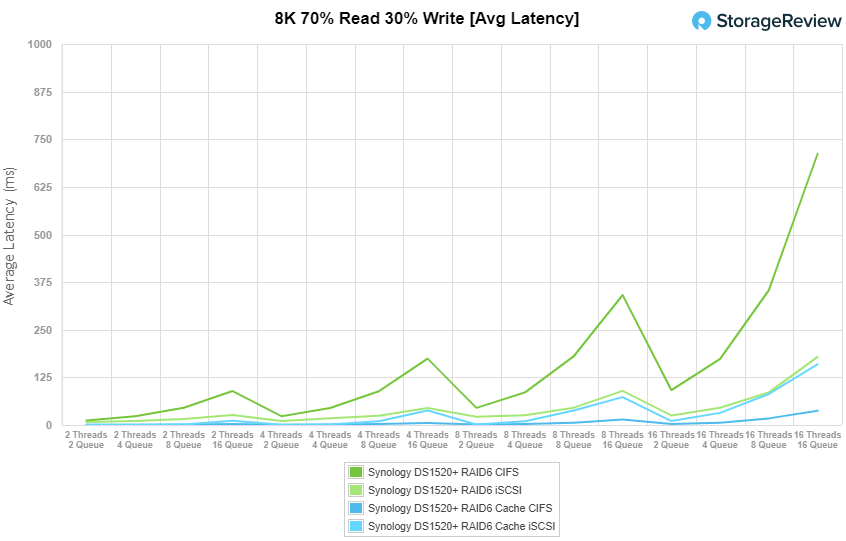 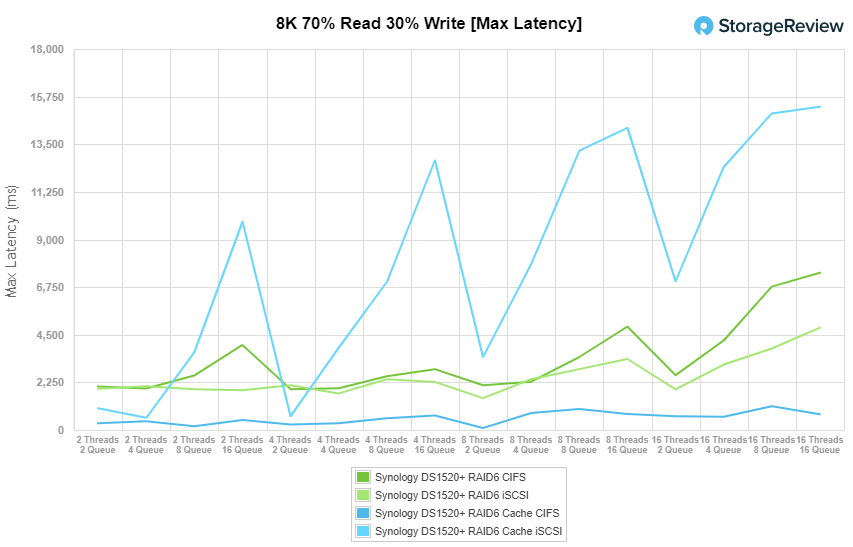 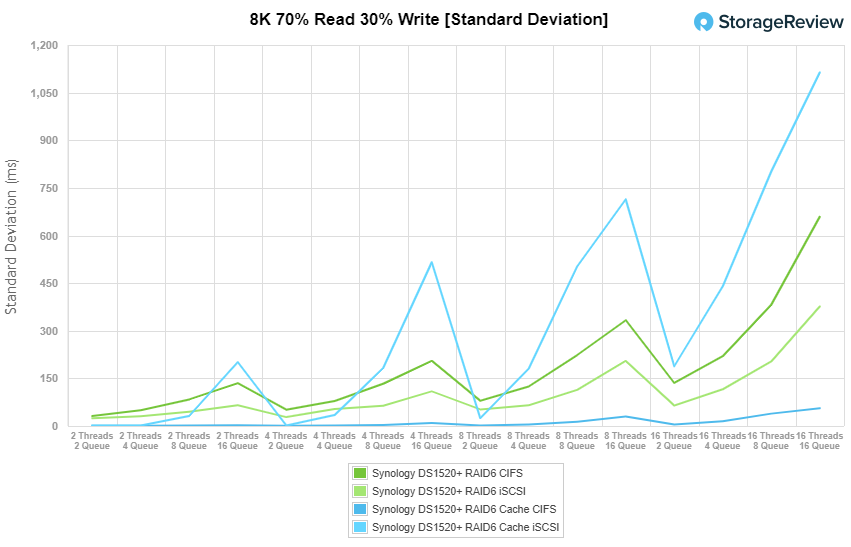 The DS1520+ is another addition to Synology’s Plus series of SMB/SOHO NAS solutions. This 5-bay NAS is highlighted by its dual M.2 SSD caching bays, which adds notable performance flexibility as demonstrated in our charts above. It also comes equipped with an Intel Celeron J4124 4-core CPU, up to 8GB of DDR4 RAM, supports the company’s DX517 expansion bays (for scalability as your data needs grow), and four 1GbE ports. Like all Synology devices, the DS1520+ is managed by the comprehensive DiskStation Manager OS, which features a vast range of multimedia and file management applications.

The DS1520+ seems to have had a lot of cost-cutting performed on it, compared to the DS1517+ it replaces. Gone is the internal power supply in favor of a large transformer block. Worse yet, the open PCIe slot used for adding 10GbE support is missing, leaving users with NVMe SSDs for cache, but nothing more than 4 1GbE ports to move data in and out of the box. Lastly while not a feature lost, we are still surprised that Synology hasn’t been able to add tiering support to the NAS lineup over caching only. In this review and others, we see certain limitations of cache under load (not to mention missing the benefits of pinning data) that wouldn’t be a problem with an all-flash tier.

For users looking to add a NAS that scales as they grow, the Synology DiskStation DS1520+ fits the bill, so long as performance isn’t a major concern. M.2 NVMe SSD caching support was added from the DS1517+, but the I/O is limited by the 4x 1GbE ports. Further, the PCI slot has been removed, so there’s no fixing that problem. As a result, the DS1520+ kind of sits in an odd space where 10GbE would be really nice to have since the cache support is there. To get that though, users have to go to something like the DS1819+ and add the 10GbE/SSD combo card or step way up to the DS1621xs+ for instance. The DS1520+ will surely do a great job, it’s just important for buyers to understand what they’re getting with this particular configuration.