In a previous article, we looked at Dell Technologies’ new midrange storage line – PowerStore. We discussed the reasons why Dell released this new line of storage and then did a hands-on investigation of what it takes to set up a PowerStore storage appliance and migrate a database to it. In this article, we will give a quick recap of the line and create a PowerStore cluster by adding a PowerStore 7000T system to our existing PowerStore 5000T system.

In a previous article, we looked at Dell Technologies’ new midrange storage line – PowerStore. We discussed the reasons why Dell released this new line of storage and then did a hands-on investigation of what it takes to set up a PowerStore storage appliance and migrate a database to it. In this article, we will give a quick recap of the line and create a PowerStore cluster by adding a PowerStore 7000T system to our existing PowerStore 5000T system.

In short, Dell created the PowerStore line of storage appliances to consolidate the current Dell EMC midrange storage lines: Dell EMC Unity XT, Compellent (SC), XtremIO, and EqualLogic (PS). Dell kept many of the existing features of these well-regarded lines but designed PowerStore from a fresh sheet of paper. By taking this approach, they were able to retain the aspects of their legacy storage products that people loved most while ridding themselves of the legacy aspects. This allowed Dell to create an innovative line of storage appliances with true scale-up and scale-out architecture.

The PowerStore line is currently composed of six different models –  PowerStore 500, 1000, 3000, 5000, 7000, and 9000 – each with different performance characteristics. What these models share in common is that they are all 2U appliances with four Intel processors, and they were designed from the ground up to leverage the performance of NVMe drives. Dell has embraced the latest software technologies with this product line, including container-based architecture and AI features. Here is the full spec sheet on the PowerStore family.

A PowerStore appliance starts with a 2U base enclosure that has two active-active nodes and 21 drive slots with four additional slots used for NVRAM modules. An appliance can be configured with as few as six drives and scaled up, with single-drive granularity, until the slots in the base enclosure have been consumed. 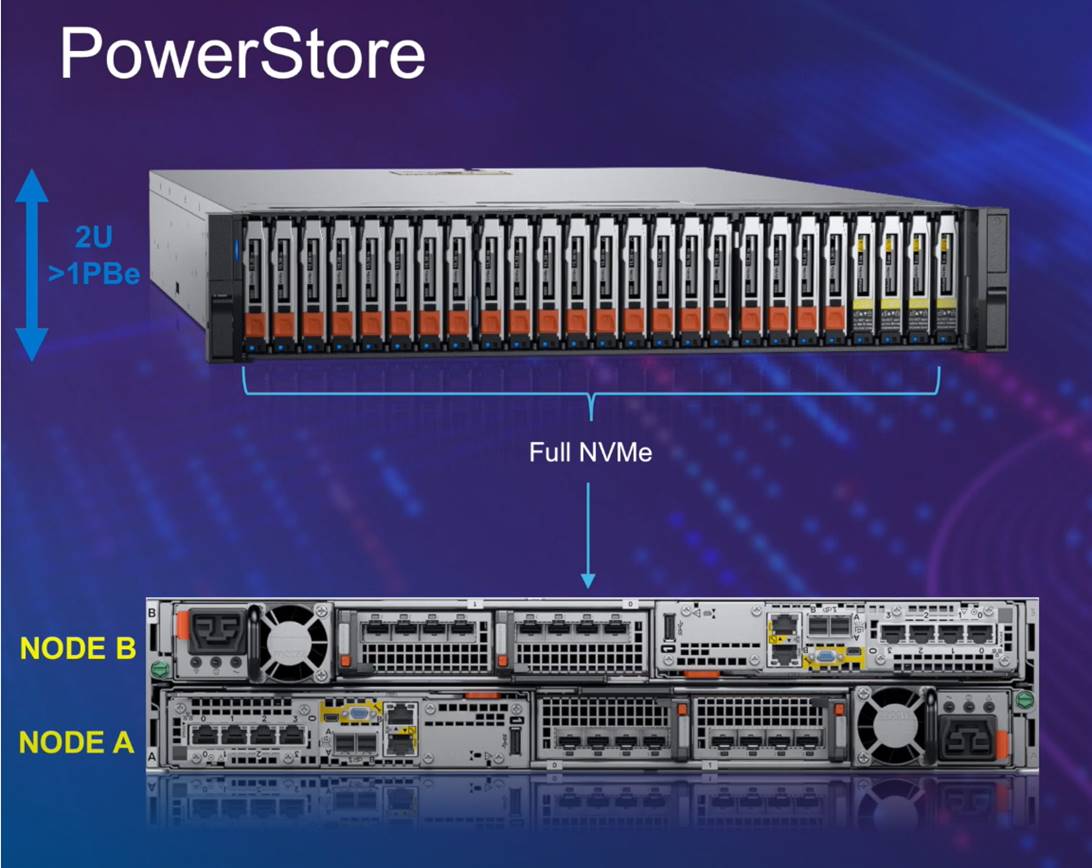 The drives consuming the slots are NVMe flash and range in capacity from 1.92TB to 15.36TB. By using larger-capacity drives, a single PowerStore appliance can have an effective capacity of 1PB in 2U of rack space. PowerStore can also take advantage of Intel Optane SCM drives as well. These can be leveraged for low-latency storage or as a metadata cache.

A PowerStore appliance can be scaled up by adding up to three additional 25 drive shelves, for a total drive count of 100 for 2.8PB of effective capacity. 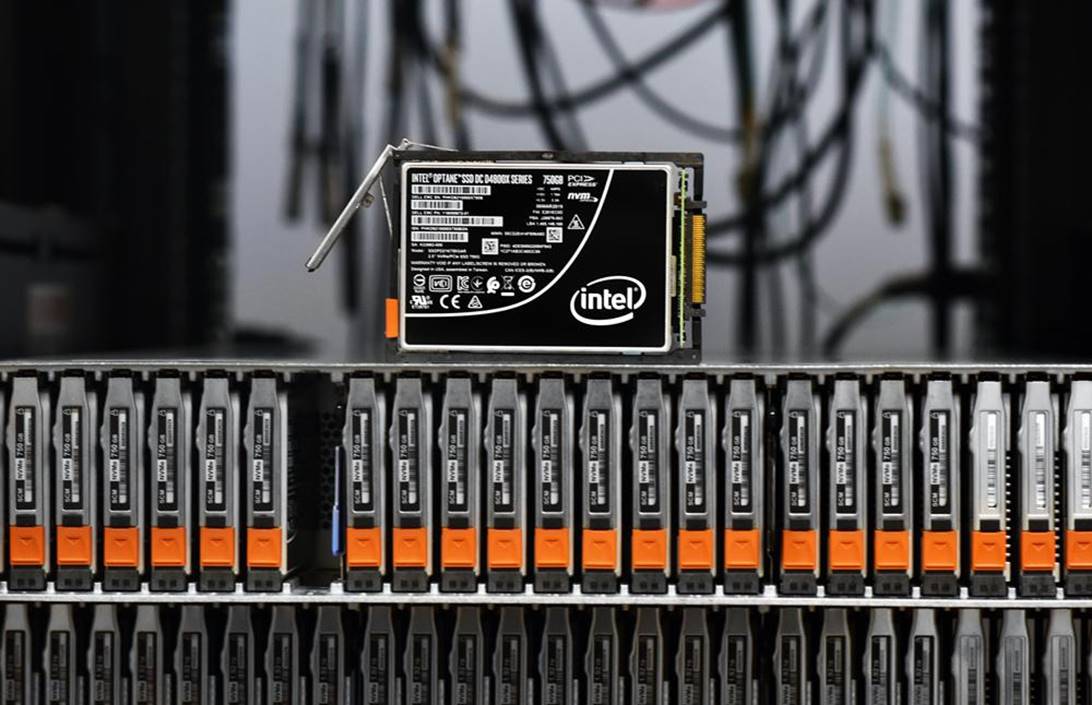 PowerStore was designed for scale-out as well as scale-up architecture. To support scale-out architecture, three additional PowerStore appliances can be added to the initial appliance to create a four-appliance cluster. One of the unique features of PowerStore is that the storage cluster does not need to be homogeneous as long as they are in the same family (PowerStore X or PowerStore T) any of the models can be added to it, effectively giving architects and planners greater flexibility with regards to storage deployment.

When fully configured, a four-appliance PowerStore cluster can have an effective capacity of up to 11.3PB. The nodes are interconnected via a standard switch for management and migration purposes, and an expensive interconnect switch is not required.

The entire cluster is managed from a single pane of glass, and the storage is aggregated into a single pool. PowerStore has an AI engine that helps with selecting which appliance to use for a given workload and offers recommendations for rebalancing storage as well as other common administrator tasks.

If the storage needs any organizational changes, PowerStore supports scaling down the number of appliances by evacuating the storage from the appliance and consolidating them to the other appliances in the cluster.

One interesting facet of PowerStore is that it allows storage to scale down and up by introducing a more performant PowerStore appliance (scale-up) into a cluster and then consolidating the workloads from the less performant appliance onto it. A company can then repurpose the unused appliances (scale-down). It is easy to see how such a scheme would allow a company to continually grow its storage environment in a non-disruptive, holistic manner by scaling its environments out, up, and back as needed on an ongoing basis. 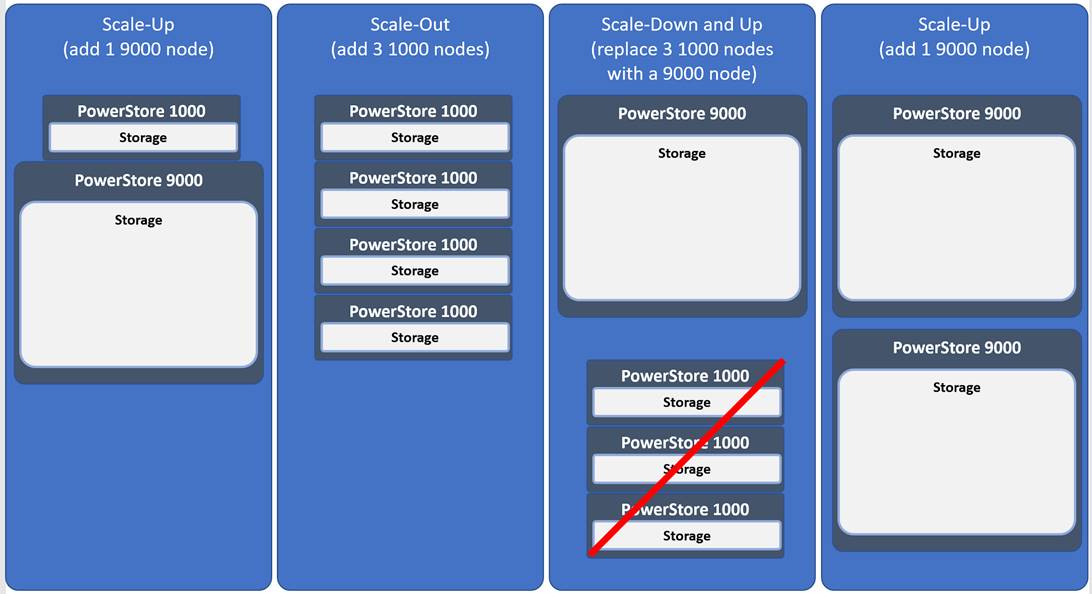 To get a feel for what it takes to create a PowerStore cluster we will be adding a 7000T to our existing 5000T.

After unboxing and plugging the 7000T into our power and network we logged onto our PowerStore Manager and clicked Add.

As the 7000T appliance was on the same subnet it was automatically discovered.

We selected it and then clicked Next.

We were notified that the new appliance would need to be rebooted to add it to our cluster.

About five minutes later we were notified that the reboot had completed and would be added to the cluster.

It took about ten minutes for the new appliance to be added to the cluster. Once it was added we were able to see it on the dashboard.

At this point, we were able to create new storage on the cluster, including storage for containers.

We originally had 10.8TB of capacity, but now, with the 7000T added we had an additional 28.3TB of capacity, for a total of 39.1 total capacity. We could parcel it out for NAS, SAN, vVol, or storage container.

The addition of the data was reflected in the Historical Usage widget.

At this point, we realized that we should change the name of the cluster from PowerStore5000T to PowerStore as it contained both 5000T and 7000T storage appliances.

This was accomplished from the Settings tab under Properties.

The top of the PowerStore Manager now reflected the name change.

Overall, it took us about 20 minutes to scale out our storage by adding a second storage appliance to it. This gave us an additional 28.3TB of capacity. The process was painless as the new storage appliance was automatically detected and it only took a couple of clicks and three IP addresses to add it.

The ability to scale up as well as out using PowerStore appliances is somewhat unique among midrange storage lines but it gives IT departments choices to right-sizing their storage and does not force them into a one-size-fits-all model.

The ease of management, monitoring, and expandability in Dell’s new PowerStore line of storage appliances shows the thought that Dell put into making this line of midrange appliances.

In our next piece on the PowerStore line, we will look at one of its features, and something we believe is unique in the storage world – the ability to run virtual machines using VMware’s hypervisor (ESXi) on Dell’s X line of PowerStore storage appliances. The ability for computational storage could be a seismic shift for the storage industry and we will see what it takes to set it up and explore the value it can bring to the data center.

If you want some hands-on time with PowerStore, Dell has set up a Hands-on Lab and Interactive demo for it. Dell has a website that has more information about PowerStore systems.

Learn more about PowerStore in an Infographic!