The Supermicro 1024US-TRT is a 1U server from the company’s A+ Ultra family. The server is ideal for organizations who need a performance-driven solution that can excel in dense compute use cases. Coupled with its extensive networking options, the 1024US-TRT features an H12DSU-iN motherboard inside the SC819UTS-R1K02P-A chassis, the former which is highlighted by its dual-socket support for AMD EPYC (Milan) series processors, upwards of 8TB of ECC DDR4 3200MHz SDRAM using 32 DIMM slots, and PCI Gen4 expansion slots.

The Supermicro 1024US-TRT is a 1U server from the company’s A+ Ultra family. The server is ideal for organizations who need a performance-driven solution that can excel in dense compute use cases. Coupled with its extensive networking options, the 1024US-TRT features an H12DSU-iN motherboard inside the SC819UTS-R1K02P-A chassis, the former which is highlighted by its dual-socket support for AMD EPYC (Milan) series processors, upwards of 8TB of ECC DDR4 3200MHz SDRAM using 32 DIMM slots, and PCI Gen4 expansion slots. 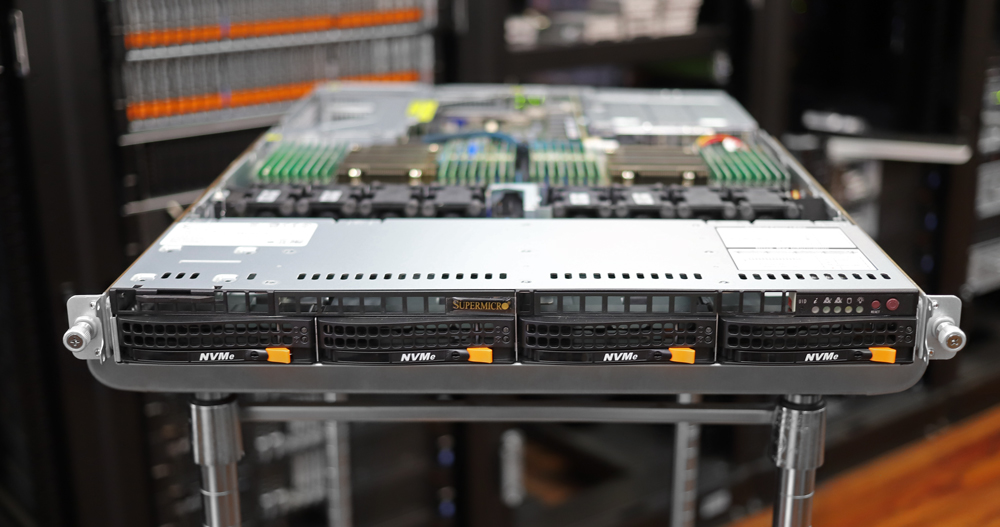 Just earlier this year, we reviewed a very similar version of this server in the 1023US-TR4.  The 1023US leveraged the EPYC 7002 family, code-named AMD Rome. With the 1024US, Supermicro of course now supports EPYC 7003 CPUs, commonly dubbed AMD Milan. AMD’s new line of processors is a significant upgrade from the previous generation.

Despite being 1U, the Supermicro 1024US-TRT supports a 280W TDP, meaning it is able to leverage the breadth of the AMD family. This includes the top-line 64 core EPYC 7763, or perhaps some of the more VMware licensing-friendly 32-core CPUs like the EPYC 75F3. 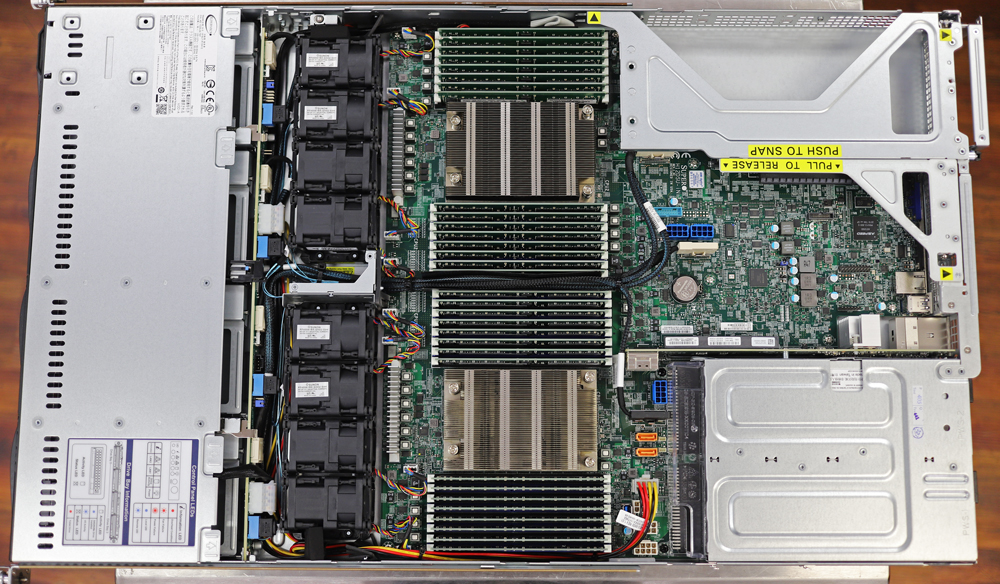 For storage, the Supermicro 1024US-TRT features the same configuration options as the 1023-TR4 (3.5″ hot-swap drive bays that can be populated with SATA, SAS, or NVMe SSDs). Supermicro continues with its unique mixture of 3.5″ bays and NVMe to give users as much flexibility for system builds as they can. This particular 4-bay config assumes that the server itself will largely be leveraging shared storage to bring its AMD cores to bear. That said, if CPU proximity is an issue, the bays can leverage a decent data footprint with high-capacity NVMe SSDs or, gasp, HDDs.

The 1024US-TRT uses a tool-less rail system design like most other Supermicro systems. We had no trouble mounting the system, as each end of the rail is equipped with square pegs that easily fit into the rack.

The control panel is located on the right side of the front panel and consists of a power on/off button, a reset button, and six status LEDs: Power, HDD, 2x NIC, information status, and UID indicators. Taking up the rest of the front panel’s real estate, and running along the bottom, are the four hot-swap 3.5-inch bays for SATA, NVME, and SAS drives. You can also add an optical drive to the right of the service/asset tag if needed.

All of the connectivity is located on the back panel of the chassis, in addition to the redundant power supply modules. From left to right are two 10GBase-T ports, two USB 3.0 ports, a dedicated LAN port for IPMI, a serial port, a UID indicator and button (which toggle the UID indicators), a VGA port, and three x16 PCI expansion slots (one PCI-E low profile slot and two PCI-E full height, 9.5″ length slots). 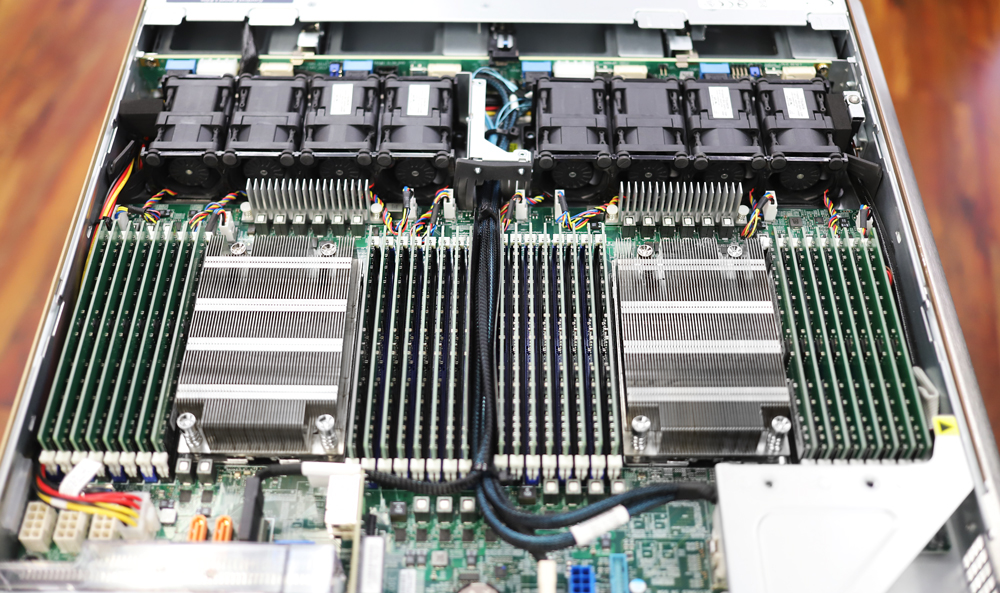 To access the internal components of the H12DSU-iN motherboard, simply remove the top cover by pressing the two release buttons and then sliding the cover off (pushing towards the back of the server).  Like servers from the A+ line, the 1024US-TRT has an intelligently laid-out design with plenty of space for airflow.

At the front, you will see the eight heavy-duty PWM fans (with optimal fan speed control), which help keep the system running smoothly. Next to the system fans are the 32 DIMMs, which support up to DDR4 3200 MHz Registered ECC of RAM and surround the dual EPYC 7200 series CPUs (7003 Series processor require an update to BIOS version 2.0 or newer for drop-in support). Toward the back of the motherboard are the redundant 800W/1000W titanium level PSUs.

For SQL Server average latency, the Supermicro 1024US-TRT saw an average of 1.5ms with 8VMs.

For our worst-case scenario latency (99th percentile), the Supermicro server had aggregate scores of 19.41ms for 8VMs and 31.67ms for 16VMs.

For random 4K write, the server began 184,623 IOPS with 23μs. It showed very stable latency throughout, until it reached roughly the 1.6 million IOPS mark where it finally spiked and peaked at 1.72 million IOPS at 990.4μs. You’ll also notice a slight dip in performance and latency at the very end.

In 64K sequential write, the 1024US-TRT showed sub-millisecond latency throughout until it approached the 120K IOPS mark. It then peaked at 125,819 IOPS (or 7.86GB/s) with 1,719μs in latency before taking a hit in performance at the very end.

Next, we switched over to our VDI clone test, Full and Linked. For VDI Full Clone (FC) Boot, the Supermicro 1024US-TRT peaked at 738,270 IOPS at a latency of 172.5μs before taking a slight hit in performance at the very end.

The Supermicro SuperStorage 1024US-TRT is a very impressive server that is designed to excel in dense compute use cases. To accomplish this, the server can be outfitted with a range of performance-driven components, including up to dual-socket AMD EPYC 7003 series processors, 8TB Registered ECC DDR4 3200MHz SDRAM via its 32 DIMM slots and four NVMe/SAS/SATA drives via its four 3.5″ bays.

The 1024US-TRT can also be equipped with PCIe Gen4 cards via the expansion slots on the back panel (one low profile slot and two full height, 9.5″ length slots). For networking, the 1023US-TR4 features dual 10GBase-T LAN ports and an RJ45-dedicated IPMI LAN port.

With our VDBench Workload Analysis, the server was populated with four Intel P5510 3.84 PCIe Gen 4 NVMe SSDs, which are specifically designed for data center workloads and similar environments. Here the Supermicro 1024US-TRT showed some pretty impressive results with peak highlights that include 2.8 million IOPS for 4K read, 1.6 million IOPS for 4K write, 24.2GB/s for 64k sequential read, and 7.86GB/s for 64k sequential write.

The Supermicro 1024US-TRT showed us great performance and a ton of flexibility for a 1U server during our tests. You might have noticed that results were very similar to the 1023-TR4; however, the 1024-TRT was delivering these numbers with lower clock speed cores. So if you’re looking for greater performance, you will certainly find it by outfitting the server with higher-end AMD Milan (EPYC 7003) models. That said, it clearly demonstrates to us that the progression of AMD’s new processors looks pretty good considering they deliver the same performance as the top-of-the-line Rome models (EPYC 7002).

Though 1024US-TRT offers a decent amount of storage with high-capacity NVMe SSDs or HDDs, those looking for a denser solution should look for Supermicro’s larger options. Overall, however, the Supermicro server takes full advantage of its new technology and will certainly deliver the performance needed in a range of enterprise and SMB environments.