The HP Thunderbolt Dock G4 is a multi-port dock solution to help increase security, productivity, and connectivity. The dock is ideal for professionals that simply need more ports and organization at a home or office workspace. The Thunderbolt G4 supports multiple OSs and up to four different 4K displays for those needing crisp details.

The HP Thunderbolt Dock G4 is a multi-port dock solution to help increase security, productivity, and connectivity. The dock is ideal for professionals that simply need more ports and organization at a home or office workspace. The Thunderbolt G4 supports multiple OSs and up to four different 4K displays for those needing crisp details. 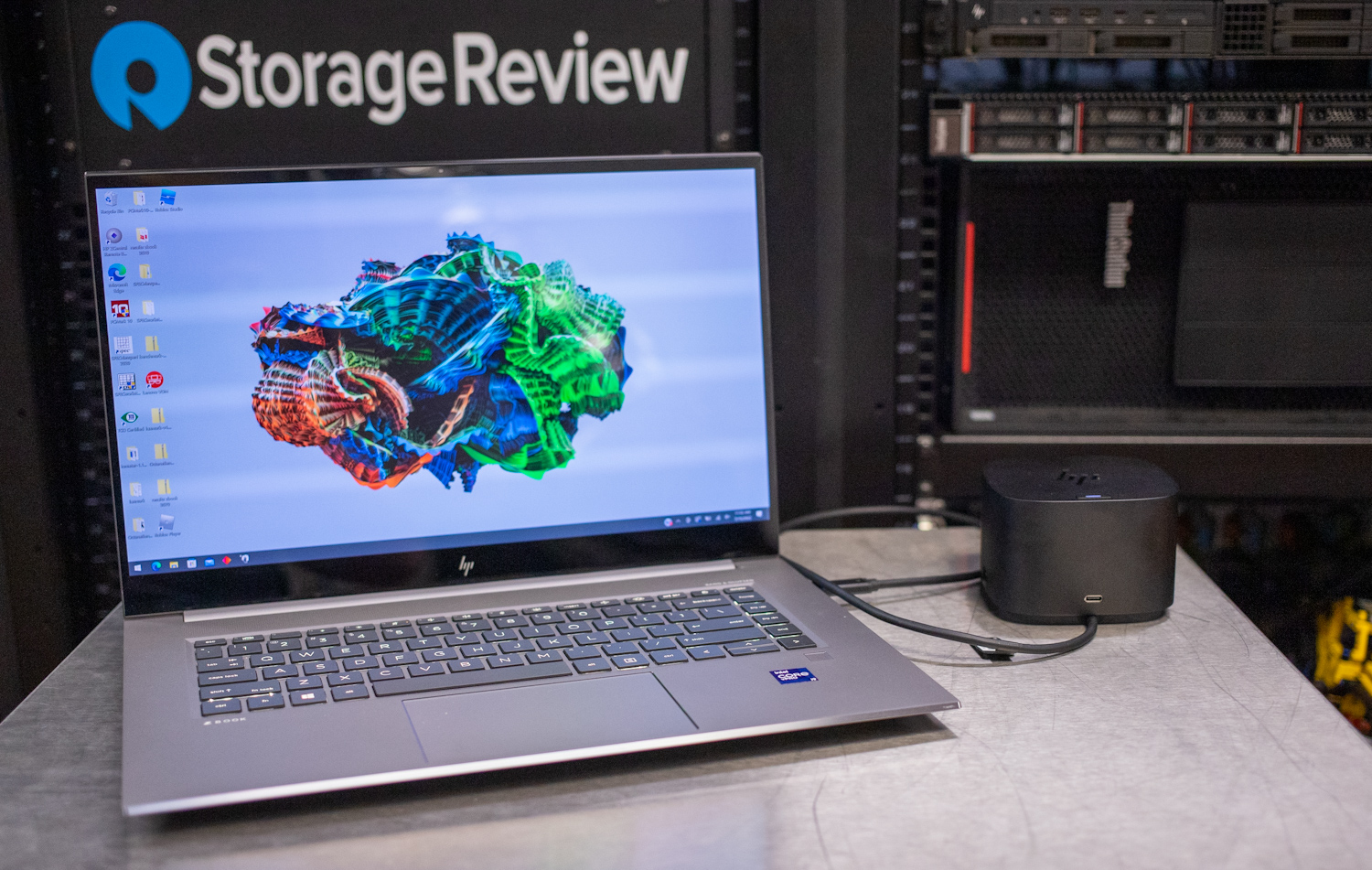 Connectivity-wise, the HP Thunderbolt Dock G4 features a wide variety of ports for any type of connection that might be needed. The rear has two USB-A 3.2 Gen2 ports, a USB Type-C Alt Mode Port (video, data, power), and a USB Type-C Thunderbolt 4 port. There are also two DisplayPort 1.4 connections, one HDMI 2.0 port, an RJ45 port, and lastly, the 4.5mm power adapter port. 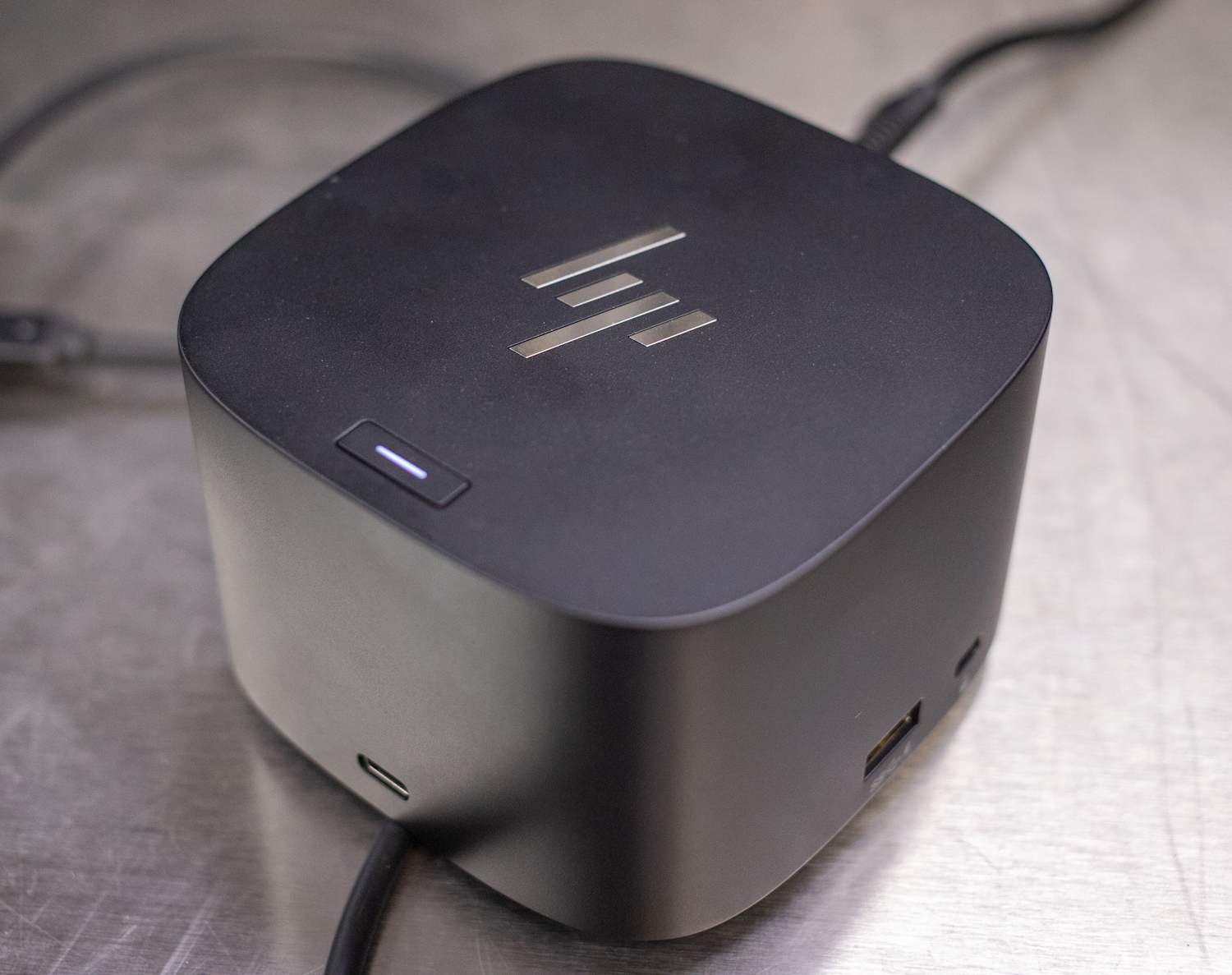 On the sides and front, there are also two USB-A 3.2 Gen2, a USB Type-C 3.2 Gen2 port (power and data), and a lock slot. This range of connectivity will most notably be for laptop users as most notebooks and Macbooks have such limited ports.

As mentioned before, there is a 100W power delivery port on the rear, delivered through the USB-C port. This power delivery port is able to charge any type of smaller device such as Apple or Android phones and tablets. However, the main reason for this port is to charge large devices such as laptops as it gives users the ability to everything connected via one device.

Since the Thunderbolt Dock G4 is Thunderbolt based, it natively passes monitor DisplayPort/HDMI signals, which means anything you can do on the host laptop display, you can do on an output display connected to the dock, this includes gaming. This makes it quite easy for users to continue to use the settings they have set up on their host devices as compared to some docks that can support 4K, however, what some dock devices have is a DisplayLink driver that mimics the display rather than passes through.

All docking stations are different, each dock comes in a different shape and size depending on the home/office needs. The HP Thunderbolt Dock G4 measures 3.9 inches x 3.9 inches x 2.7 inches and weighs 1.6lbs, making it compact but solid for a docking station. This is great for work spaces that have a little less room. Some other docks opt for a flat design that occupies more square inches on the work surface. 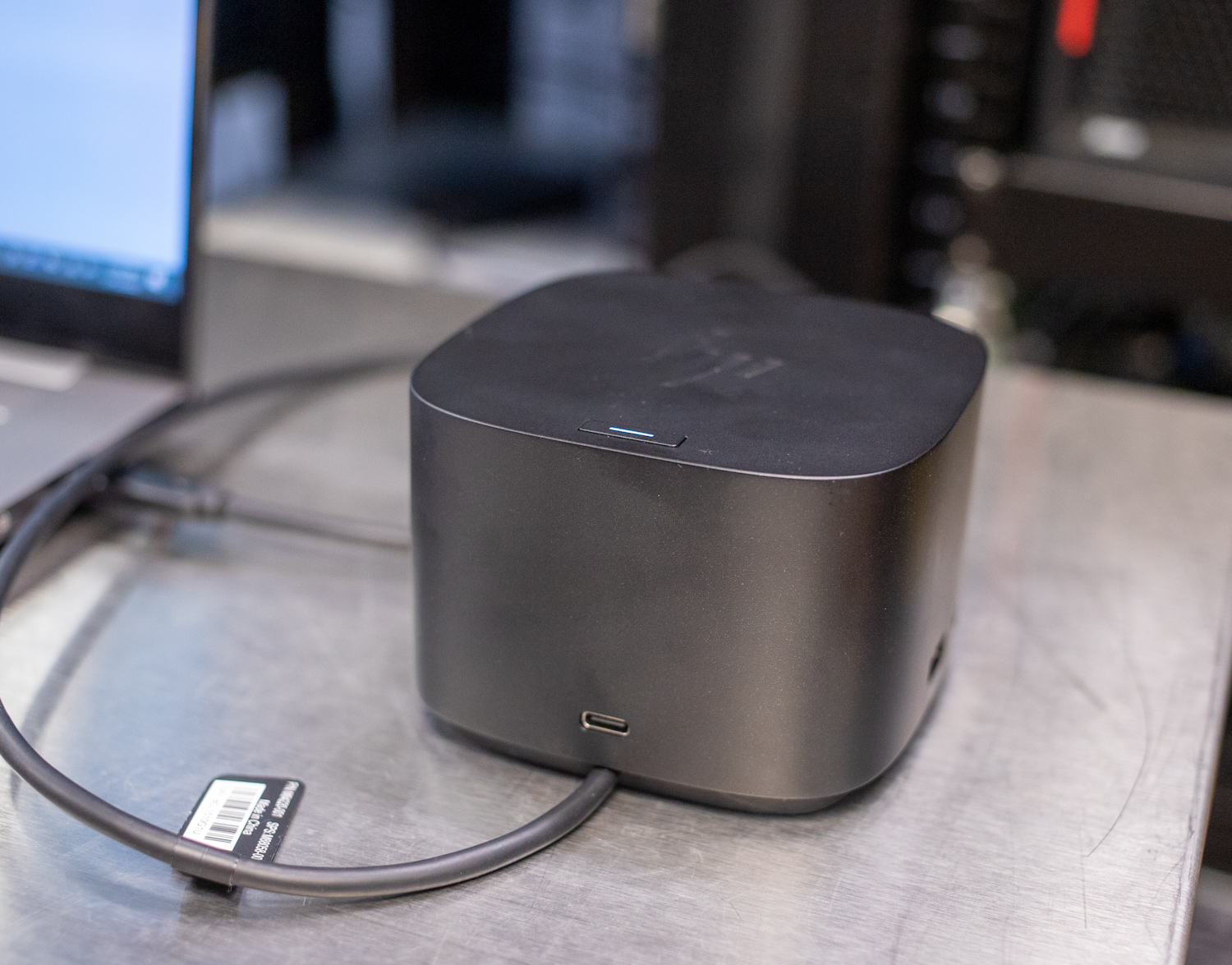 On the top of the Thunderbolt G4, the slick HP logo is shown with a chrome finish. Right underneath that is the power button shown by a solid white LED that glows when the device is on. A minimalist design overall on the top can draw attention away from the rest of the device when there are cables plugged in the rear.

The front of the Thunderbolt G4 features a smooth black finish along with one port on the bottom that is a USB-C that offers data transfer as well as offering a power out option. This would be ideal for those that might need a quick charge to a personal device such as a phone or tablet. 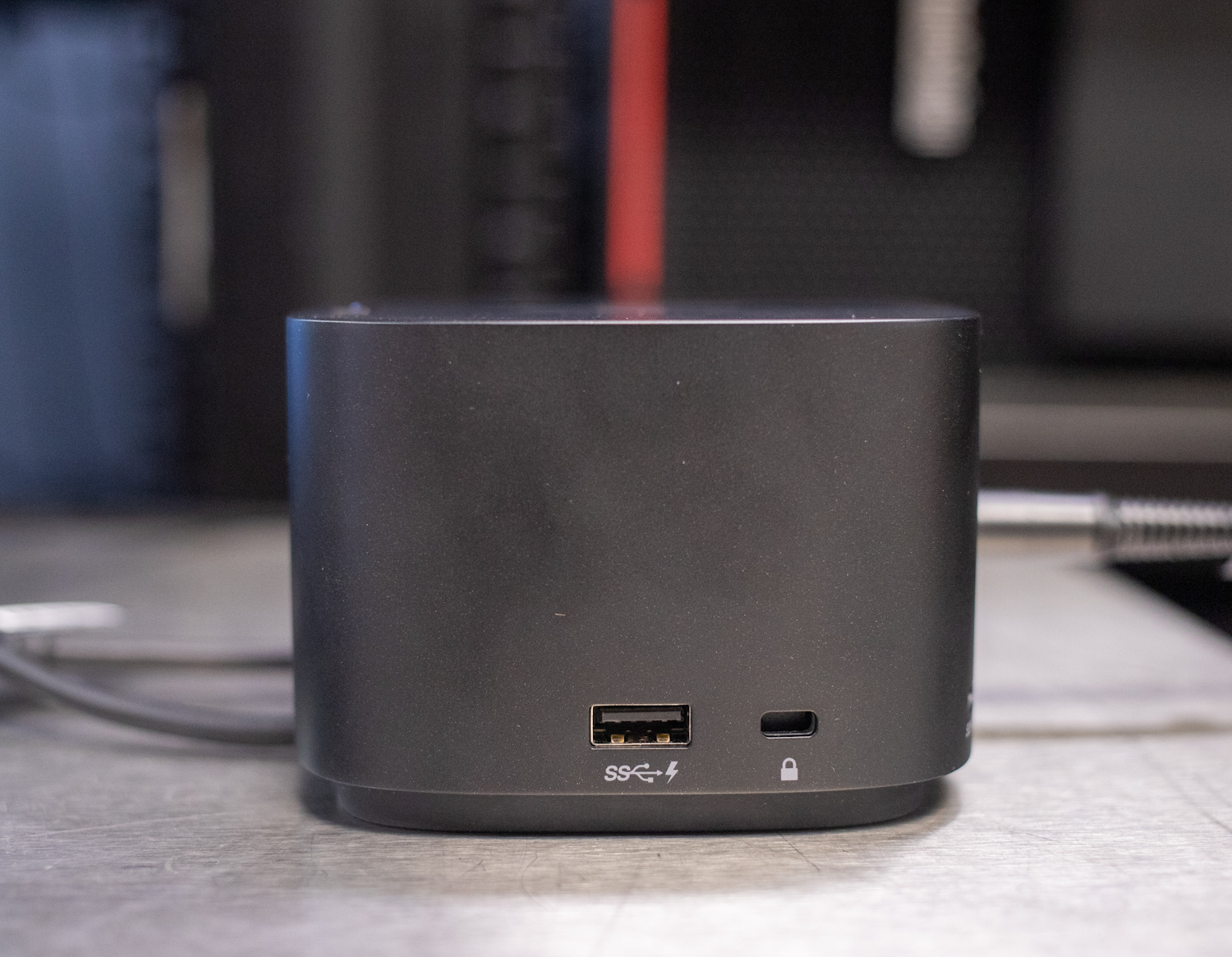 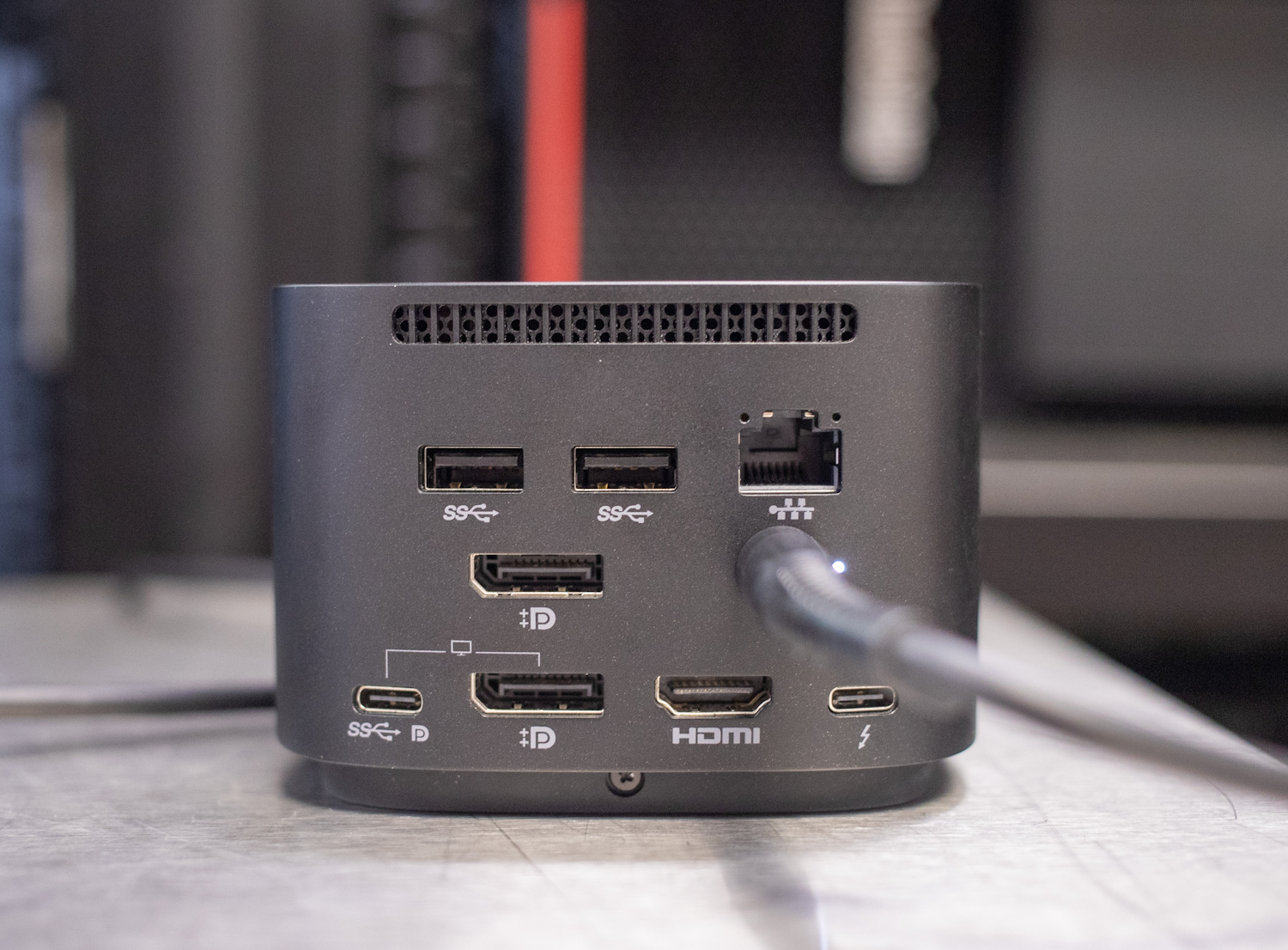 On the rear of the Thunderbolt G4 is where all the main connectivity of the device can be found. Starting at the top, there is a small vent slit that offers ideal air cooling if the device were to warm up when there are multiple devices attached. The first row of ports offers two USB-A 3.2 Gen 1 charging ports when docked along with an RJ45 port for network connectivity. The second row has one of the DisplayPort 1.4 ports along with the power adapter port. The third/last row shows off an HDMI 2.0 port, another DisplayPort 1.4 port, one USB-C DP alt mode port, and the Thunderbolt 4 port. 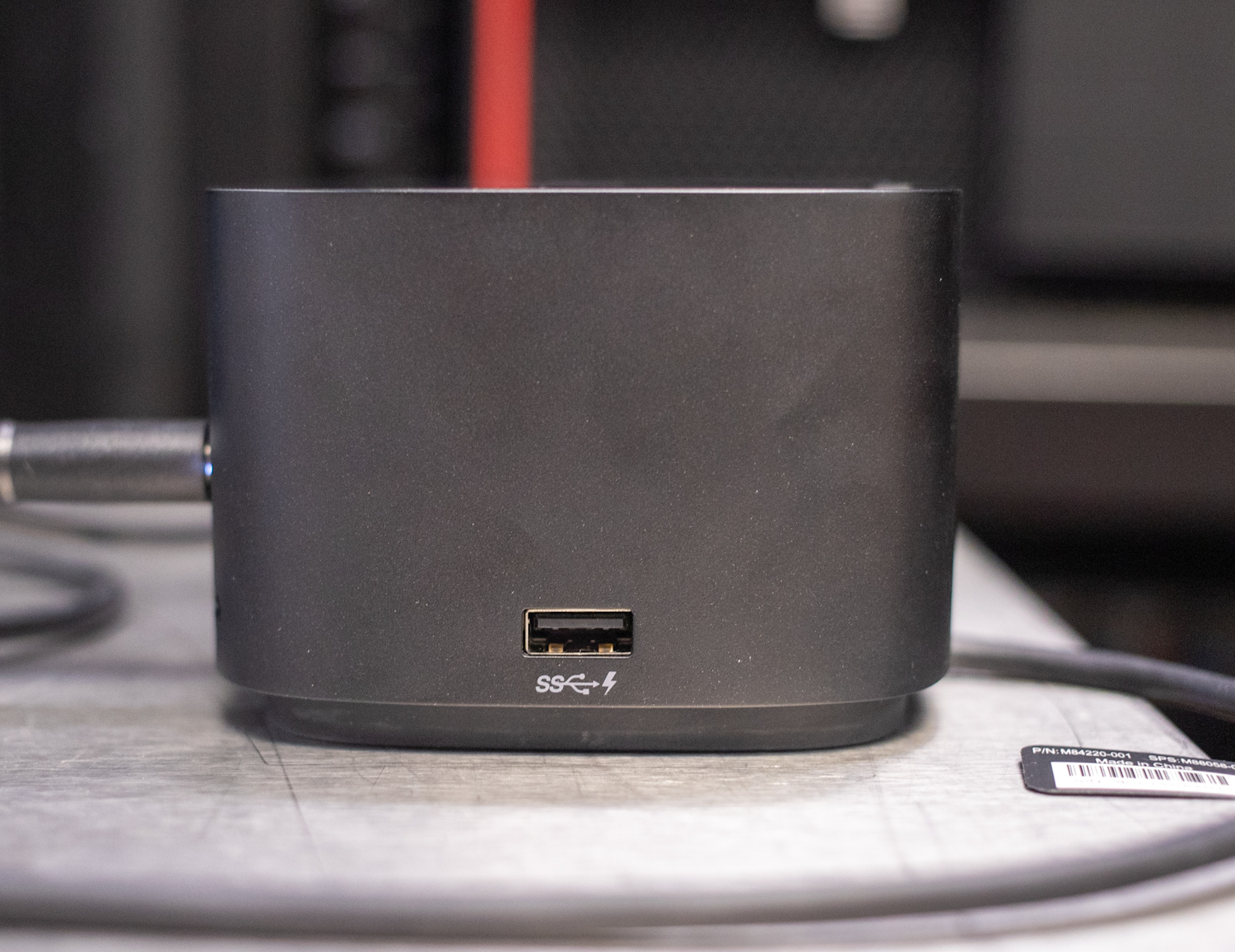 We paired up the dock with several machines, HP and others. All worked as expected, and having Thunderbolt as the primary connection to the laptop means it’s possible to get true 4K out to monitors. We also like the tiny footprint and the unit itself feels well-built.

The main negative of the design is the lack of card readers. It would have been nice to have an SD reader at least. We also would prefer if the power adaptor plug was in a lower corner on the dock so it’s a bit more out of the way.

Depending on your needs, the Thunderbolt G4 dock can be very useful as it offers a wide range of connectivity and functionality, especially for those that are looking to increase their number of screens to aid in productivity. This HP dock can be really useful for notebooks thanks to the dock’s ability to charge devices with the 100W PD port.

As with any dock on the market, there are some limitations that come with the Thunderbolt G4, the first being the lack of SD card ports and a 3.5mm jack port. For video editors, having the ability to use a dock for SD cards is a nice thing, however, this dock doesn’t allow that and users would either have to look at a different dock or buy another hub if the host device doesn’t have an SD slot.

All-in-all, for users that are looking to increase productivity and increase the number of displays available to one device, this might be the dock for you. At $300, it’s not inexpensive, but we’ve had many of the prior generations of HP docks in the office and they’re all still going, so there’s something to be said for the high-quality build.

Scale Computing: Unboxing to Up and Running in No Time