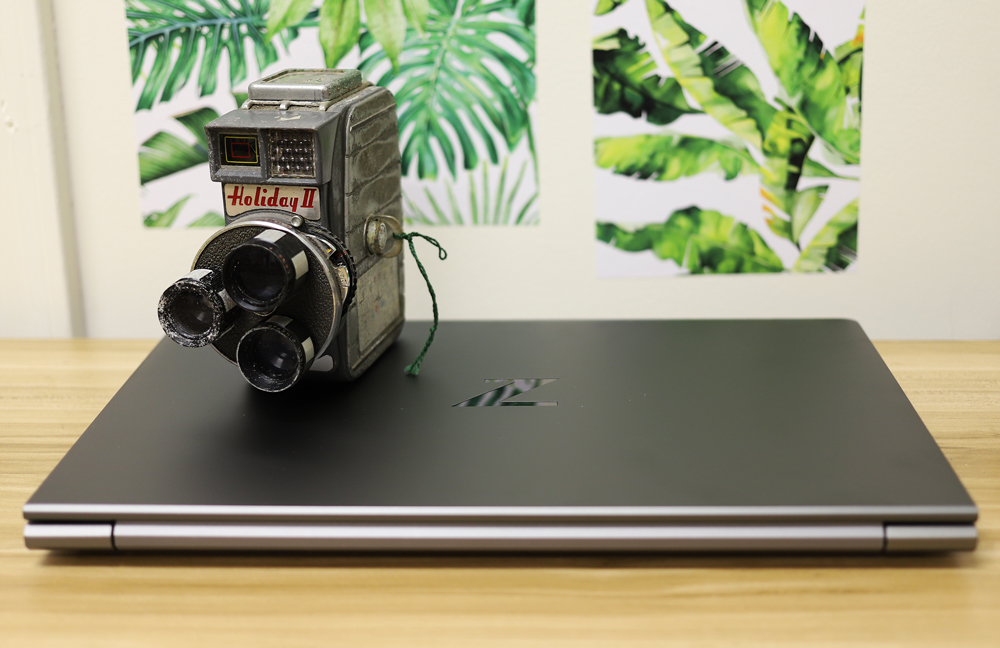 So, let’s get the elephant in the room out of the way. Why is this a hands-on and not a full-fledged review? Simple. HP provided us with some pre-production units so we could get our hands on them early. It is good that they got here early. It could be a bit problematic to run performance as they are not exactly what you will be able to order next month. So instead of providing the readers with information that may not be fully accurate, we are doing a hands-on approach instead.

It is no big secret that more people are working from home now. These remote workers that are doing the run-of-the-mill office tasks will be fine with their notebooks or thin clients. Power users, however, need workstations. HP’s refresh comes at an opportune time for the company and for those looking to upgrade.

Let’s first dig into the hardware, then looking at benefits, specs, and then we’ll get a bit more hands-on for feelings and our thoughts on it. With hardware, the HP ZBook Power G8 comes with 11th gen Intel Core i5, i7, or i9 CPUs with a top end of 8 cores and 2.6GHz base frequency. Along with that, the user can have up to 64GB of 3200MTs RAM and up to an NVIDIA T600 GPU.

You can have up to 2TB of PCIe Gen4 storage internally, though there is an optional configuration of up to 4TB of PCIe Gen4 NVMe storage. Of course, adding these components begin to take you out of the affordability category. The laptop comes with a 15.6” screen and you can get that in up to 4K. A neat thing about this workstation is that it comes with a full keyboard, nice for those of us that need a numeric keypad frequently. The above makes this workstation a good choice for several professional use cases. 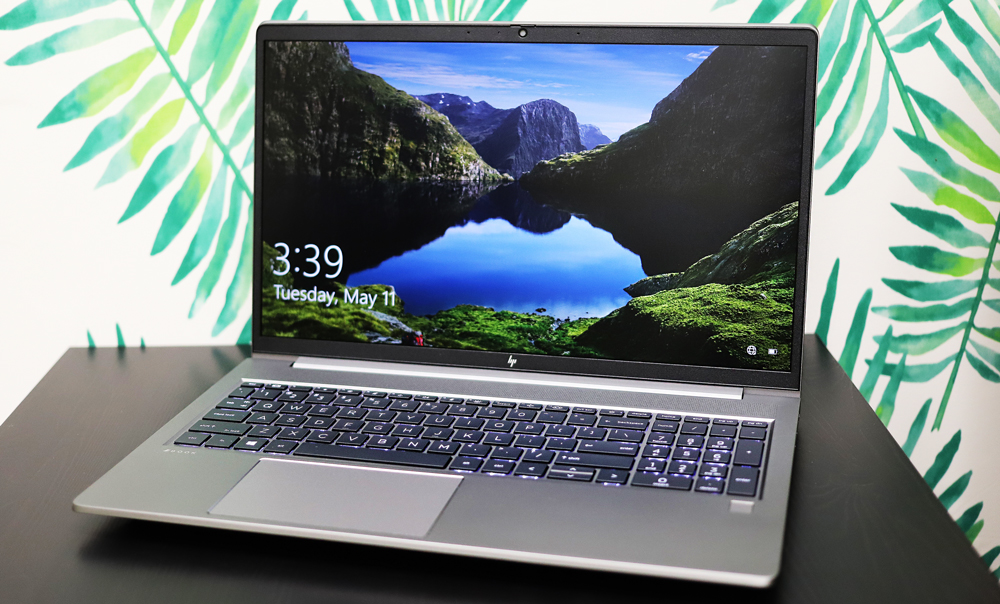 On top of powerful, the workstation is secure. With a large chunk of the population working remotely and ransomware attacks popping up all over, it is good to get your power users a secure system. HP has added security benefits to all of their new ZBooks that came out today. The two new security features with the G8 workstations are tamper lock: An intrusion detection system. There are sensors in the bottom of the unit that detects if it has been removed from the chassis to be tampered with. From here users can determine what happens next through a policy: power down the unit, just give an alert, BIOS lock, or the TPM, and BitLocker can completely lock down the system.

The other new feature is the Tile feature. The Tile is embedded with Intel. The service Tile provides will allow users to detect and find their missing laptop. Tile is wireless Bluetooth making it easier to locate. You will need a Tile subscription service.

Aside from being secure, the workstation is also durable with an all-aluminum chassis and MIL-STD durability. While it can take a few bumps and bangs, you should still be careful with it. If remote working starts winding down, it should be able to travel back and forth to the office with no problem.

One of the downsides to remote work is the toll it takes on collaboration. While this issue is often cited it seemed to be up for debate as some studies show a negative impact and others show the use of technology to communicate instead of face-to-face to be more beneficial. If leveraging technology is what is needed for collaboration, HP does install its ZCentral Remote Boost software on all its computers. Tom gave us a fairly in-depth look at how it works and what to expect here.

Overall, the HP ZBook Power G8 is a notebook that, while larger than the 13” I’m used to, still doesn’t feel overly large. It is darkish gray aluminum and it is slightly wider and about twice as thick as the MacBook Pro I’m writing this article on. When closed, it has the HP ZBook Z on top.

On the left is the collapsible network port, a USB port, and an HDMI port. Up near the hinge is a Kensington Lock.

On the right side, there is an audio port for headphones, two USB ports, and a Thunderbolt 4 (40Gbps) port. The power is also on this side.

The bottom has model information and speakers. There are some short feet that run the length of the computer to keep it a bit off of the desk.

Opening it up it is nice to see a full keyboard on a laptop. There is a fingerprint reader in the bottom right for those looking for extra security. The notebook sits up a bit higher than I’m used to, but I bet I would adapt after a few days of use. I feel like the trackpad is directly under my left hand which I don’t care for, but I’m a heavy-handed typist, learning how-to on the old manual typewriters back in the day. 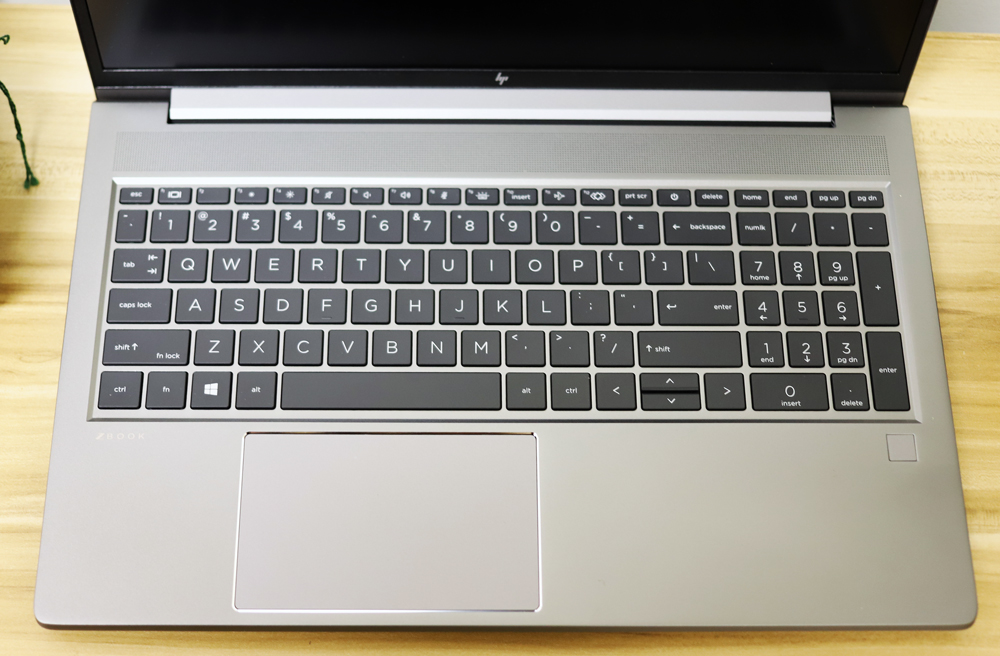 The screen is larger than I’m used to, which is actually nice in this case. Not having the best eyes in the world, it is always better to easily read things. There is a very thin bezel on either side maximizing how much space you have to work with.

The overall feel of it is sturdy but not so heavy that it is awkward. I’m used to frequently holding a notebook in one hand and moving them around a lot. The HP ZBook Power G8 can be moved in such a manner quite easily. It would be a bit bulkier on a plane but nice to have the extra screen space.

The HP ZBook Power G8 power up fairly quick (though the initial setup takes too long, I think this is a Windows 10 issue). The display is vibrant and lovely, we are using the 4K model. The keyboard and trackpad are fast and responsive. Aside from the location of the trackpad, I feel like this would be a very good workstation to use on the go.

HP has refreshed their ZBooks with the new G8. The company has rolled out the new HP ZBook Fury G8, HP ZBook Studio G8, and what we are looking at here, the HP ZBook Power G8. The HP ZBook Power G8 is more of the entry-level flavor, billed as the most affordable mobile workstation. We don’t have a price, so maybe. The new workstation comes with the 11th generation Intel Core i5, i7, and i9 processors, with the top end being the i9 11950H. Users can have up to 64GB of DDR4 3200MTs RAM and there is an option to have up to 4TB of PCIe Gen4 storage. The notebook comes with a 15.6” screen and a full keyboard.

The HP ZBook Power G8 hits all the performance and security buttons, but it is also a nice experience to use. It comes with a full keyboard, which is nice for those of us that miss the numeric keypad. The keyboard and trackpad are responsive and comfortable, though I would like the trackpad to be somewhere other than under my left palm. The 4K model offers a beautiful picture and the screen is wide enough to put up a couple of windows to work side by side.

Overall, with all the options, the HP ZBook Power G8 is a good choice for those that need some of the advantages of a workstation without the normal cost of one.

Get an extra 15% off business desktops and workstations: code DTSMB15