The Inspur NF5266M6 is a 2U dual-socket rackmount server designed for high-density storage, supporting up to 26 3.5-inch drives—24 in the front with a unique tray-load system and an additional 2 in the back. It’s not lacking for performance, thanks to Intel’s “Ice Lake” Xeon processors, and offers ample expansion with up to seven PCIe slots, including OCP 3.0. Overall, we found the NF5266M6 a versatile storage server that checks the boxes that buyers in this segment require.

The Inspur NF5266M6 is a 2U dual-socket rackmount server designed for high-density storage, supporting up to 26 3.5-inch drives—24 in the front with a unique tray-load system and an additional 2 in the back. It’s not lacking for performance, thanks to Intel’s “Ice Lake” Xeon processors, and offers ample expansion with up to seven PCIe slots, including OCP 3.0. Overall, we found the NF5266M6 a versatile storage server that checks the boxes that buyers in this segment require.

The NF5266M6 is one of Inspur’s six offerings in its rackmount M6 server family. In addition to 24 3.5-inch hot-swappable front bays, it also supports a variety of drive options around the back, including a bank of E1.S ruler SSDs. Its seven PCIe slots include up to two OCP 3.0 slots. This server supports two third-generation Intel “Ice Lake” Xeon Scalable CPUs and 16 DIMM slots (eight per CPU) for up to 2TB of RAM.

The NF5266M6’s competition includes the HPE Apollo 4200 Gen10, which also offers 24 hot-swappable 3.5-inch bays and 16 DIMM slots. For the most part, there are few systems that offer this much 3.5″ density within a 2U form factor.

Inspur also offers its SuperX storage in hyper-converged infrastructure (HCI) via Inspur Rail. Multiple NF5266M6 servers can work together for superior performance. In Inspur’s testing, it configured three NF5266M6s with two Intel Xeon Gold 6330 CPUs, 128GB of RAM, two NVMe caching drives, and one 4TB SAS storage drive, and connected them through a 100Gbps TCP network. Performance in that scenario is up to 830,000 IOPS in 4K sequential read and 740,000 IOPS in 4K sequential write, according to Inspur. 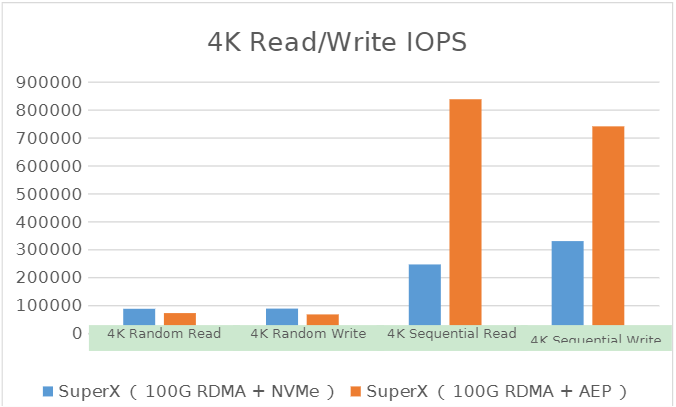 The NF5266M6’s full specifications are as follows:

The NF5266M6 has normal 2U rackmount measurements of 19 by 3.4 by 35 inches (including mounting ears). The front of the server has a different look than you’d expect, however, as no individual drive bays are visible.  Instead, the 24 hot-swappable front bays are uniquely divided into three trays of eight drives. (See our demonstration on TikTok.)

The drives sit in caddies with a unique handle that allows you to simply lift them out, almost like a mini-shopping basket. (We also demonstrated this on TikTok.) 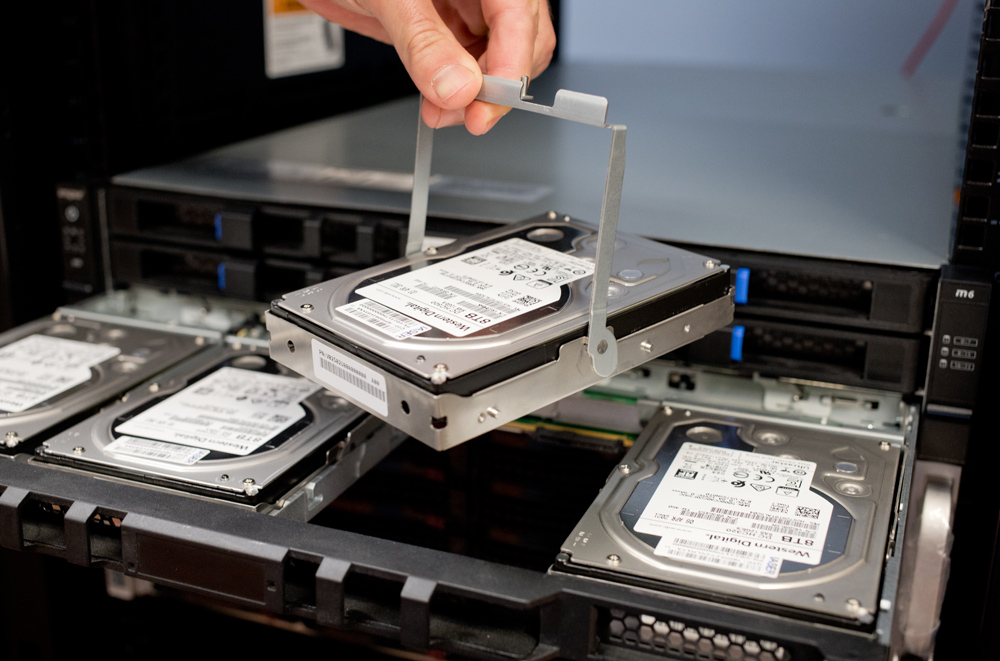 This server can be configured in numerous ways. There are up to seven PCIe slots, which include five slimline x8. Two 3.5-inch or eight drives can be installed around back. As seen below, our configuration has four 2.5-inch drives, two SATA and two NVMe. Interestingly, Inspur also offers an option with eight E1.S NVMe SSDs. This configuration opens a lot of doors with the HDDs inside. SDS players will love having access to so much flash and capacity in one box.

The NF5266M6 supports two Intel Ice Lake Xeon CPUs. We’re testing it with two 205-watt chips, though up to 225-watt chips are supported. This server’s cooling comes from six 6038 or 6056 mid-chassis fans, which you can see here. 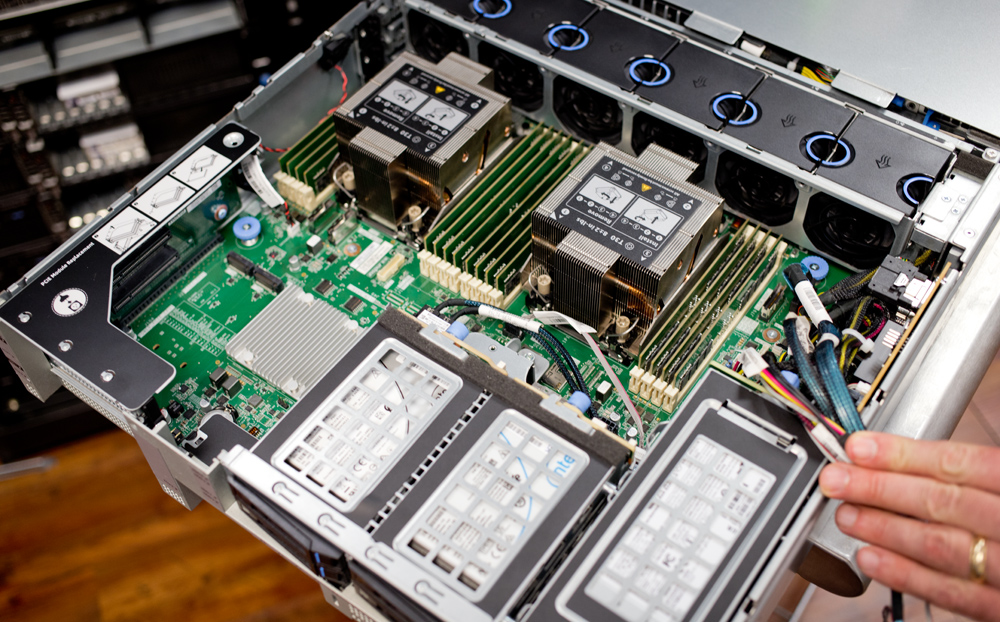 The airflow is well-positioned to pass through the CPU heatsinks and surrounding memory DIMMS. Each CPU gets eight DIMMs. The 1+1 redundant power supplies, visible at the bottom right, are either 1300W or 1600W and carry 80 Plus Platinum (94% efficiency) ratings. Titanium gold power supplies (96% efficiency) are also supported.

Here you can see the motherboard’s twin M.2 slots in our configuration. These are nice to have, as some servers omit them and force you to use a drive bay or PCIe slot for boot storage. 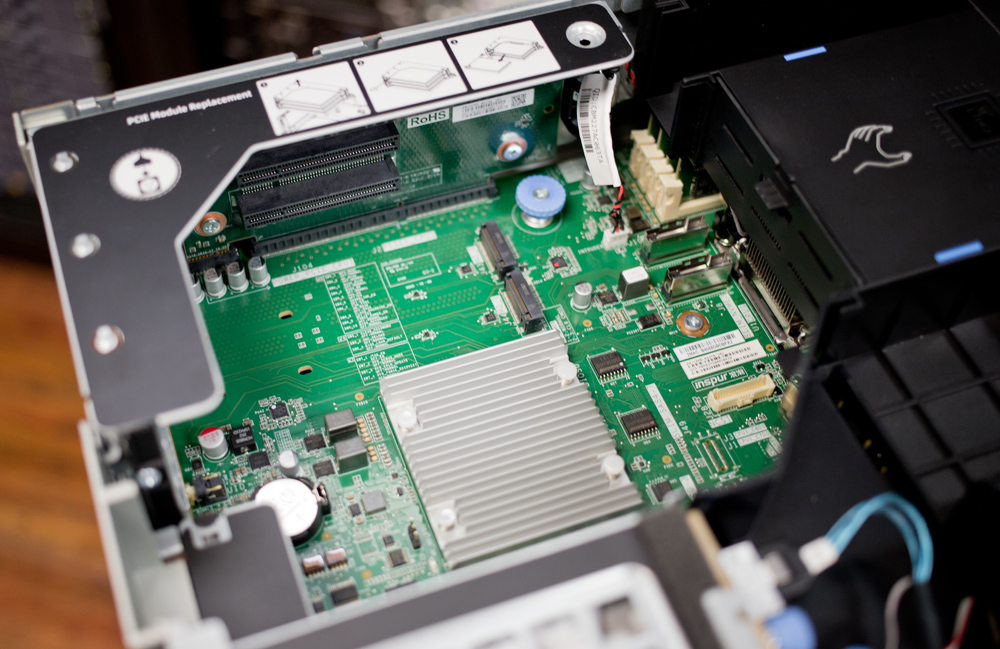 We are testing the NF5266M6 configured as follows:

Most of our testing will be done with the SSDs. We focused on synthetic workloads based on the configuration supplied. That said, with the hard drives, we did install TrueNAS CORE on the NF5266M6 just to demonstrate that it works. Configured in RAIDZ2, our 24-drive setup started and ran without a hitch. If you were to leverage 20TB hard drives, you could get nearly half a petabyte of storage out of this platform, with room for NVMe storage for cache or a flash tier. 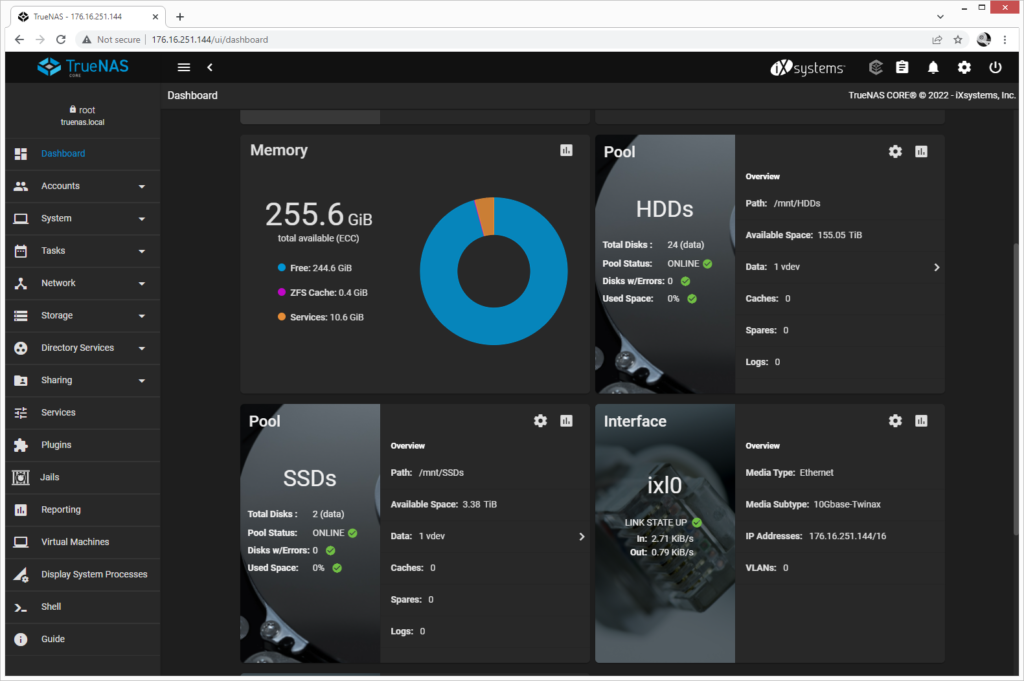 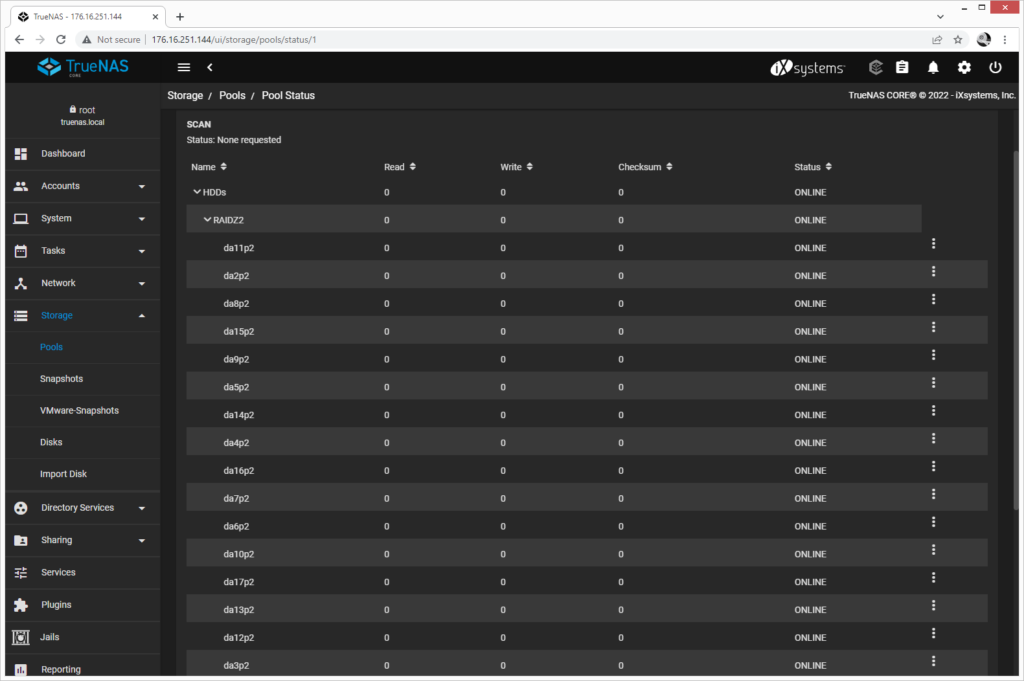 Next up is 64K sequential testing. Starting with read performance, the NF5266M6 ended at 9,882MB/s at 404µs latency, a respectable showing given we’re only leveraging two NVMe drives.

Continuing onto our Oracle workloads, the NF5266M6 exhibited similar behavior as it did in the SQL tests, with latencies starting low and gradually increasing with no surprises. In our first test, Oracle workload, we saw a starting latency of 79µs with 48,677 IOPS and a finish at 129µs with 491,131 IOPS.

Our final test series is VDI clone test, of which we run Full and Linked. Starting with VDI Full Clone (FC) boot, the NF5266M6 performed predictably until the end of the test. It achieved 368,948 IOPS at 173µs before regressing to 358,679 IOPS at 178µs to finish the test.

Next is VDI FC Initial Login, where the NF5266M6 started stable but showed instability past 150,000 IOPS where latencies spiked. It finished the test with 177,721 IOPS with 285µs latency.

We also saw spikes in VDI FC Monday Login towards the end, though not too bad. The last result was 177,877 IOPS at 176µs latency.

The Inspur NF5266M6 is a compelling high-density storage platform. This 2U two-socket server is based on Intel’s third-generation Xeon Scalable processors (Ice Lake) for good performance. Its memory ceiling is constrained by its 16 DIMM slots, so though this server can be used for other workloads, high-density storage is its strength. Inspur’s NF5266M6 server line is more suitable for application workloads, with higher memory ceilings and NVMe drives for tiering/caching.

Highlights for the NF5266M6 include its unique tray-load drive approach, which makes swapping out multiple drives a breeze. It can also be configured with an additional two 3.5-inch bays or four or eight 2.5-inch bays, depending on how many PCIe slots you need (there are seven, including up to two OCP 3.0). We also like that the NF5266M6 offers two onboard M.2 slots so you don’t have to give up PCIe expansion or NVMe drives for boot volumes.

Overall, the Inspur NF5266M6 is a capable high-density storage server with as many bays as you’d expect from a much larger server in just 2U, good expansion, wide configuration options, and stable performance for its intended applications. Toss in some NVMe in the back for flash acceleration or a large flash volume with eight E1.S SSDs and this Inspur M6 has tremendous potential.