The Micron 7400 Pro NVMe SSD is the company’s most recently shipping enterprise PCIe Gen4 SSD,  highlighted by new comprehensive security features and a range of form factors and capacities. Micron indicates their drive is ideal for demanding data center workloads and for those looking to transition to next-generation server architecture. The 7400 Pro also features a mixed-use “MAX” model, which is more suitable for use cases that require higher endurance.

The Micron 7400 Pro NVMe SSD is the company’s most recently shipping enterprise PCIe Gen4 SSD,  highlighted by new comprehensive security features and a range of form factors and capacities. Micron indicates their drive is ideal for demanding data center workloads and for those looking to transition to next-generation server architecture. The 7400 Pro also features a mixed-use “MAX” model, which is more suitable for use cases that require higher endurance. 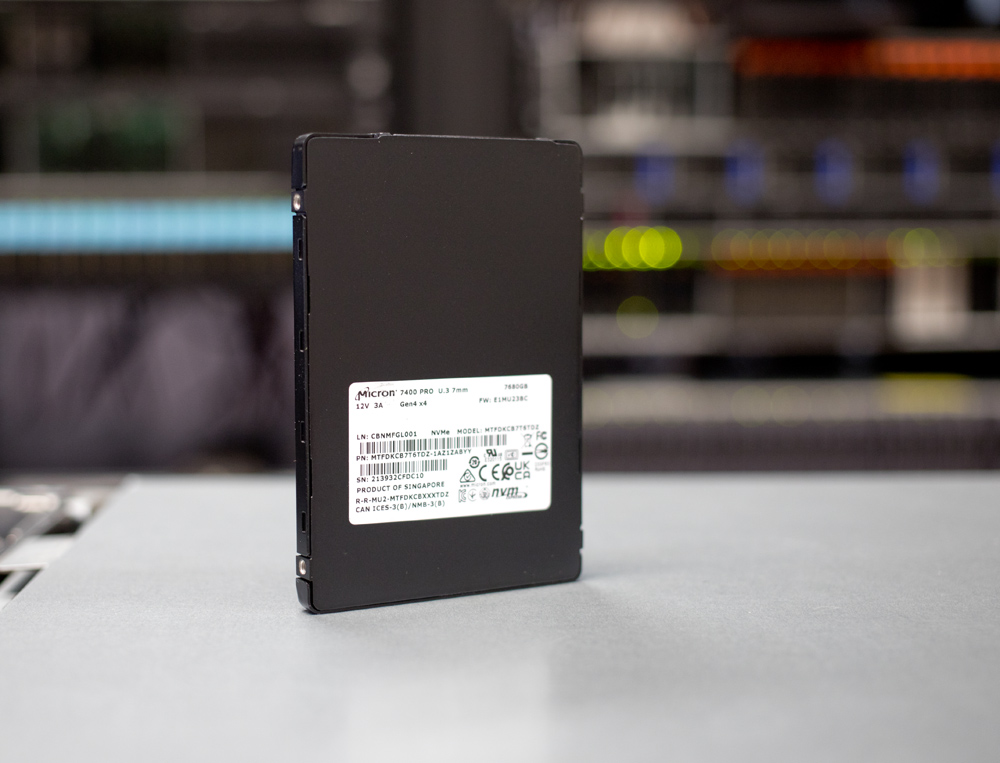 Prior to the 7400 Pro, Micron’s recent enterprise drives have been Memblaze SSDs branded under the Micron logo. As such, we are happy to get our hands on this new non-Memblaze drive to see what it is capable of.

Micron’s 7400 Pro is available in three drive types, each of which is comprised of different form-factor sizes and capacity models. This is certainly ideal for the ever-evolving data centers, an area that always has to cope with the exponential growth of data.

The U.3 models come in both 7mm and 15mm sizes (a market first for the PCIe Gen4 U.3 form factor) and are available in capacities from 800GB all the way up to 7.68TB. Because U.3 supports NVMe, SAS, and SAS host controllers, field support will be much more seamless. For performance, sequential reads and writes are quoted to deliver up to 6.6GB/s and 5.4GB/s for the highest capacities models, respectively, while random 4k performance is expected to hit upwards of 1 million IOPS read and 190K IOPS write.

The M.2 models are available in 22 x 80mm and 22 x 110mm sizes with capacities ranging from 400GB to 3.84TB. The PCIe Gen4 M.2 22 x 80mm form factor is designed for server boot use, and is currently the only of its kind to feature power loss protection. The benefits of the 7400 Pro M.2 version are its easy integration into existing architectures and low power draws. For performance, it is expected to reach up to 4.4GB/s and 2GB/s in sequential reads and writes, while random performance is quoted at 650K IOPS read and 105K IOPS write.

The E1.S models are available in 5.9mm, 15mm, and 25mm sizes in capacities ranging from 800GB to 3.84TB. This is the most interesting form factor of the bunch. As we indicated in our article on how the E1.S ruler is going mainstream, the  E1.S form factor (i.e., 15mm variant) will bring bar-setting performance with 25W+ support of the PCIe Gen5 SSDs that are right around the corner. Looking at the present, it offers greater density, flash-optimized performance, and improved power and integrated cooling options. As for performance,  Micron quotes their shorruler to reach up to 6.6GB/s read and 3.5GB/s write, while random performance is expected to hit the 800K IOPS read and 150K IOPS write mark.

As you can see, Micron’s comprehensive 7400 Pro line will be able to satisfy a range of data center use cases, no matter the power, capacity, footprint constraint, and thermal requirements a server environment might have.

Security seems like a big focus for Micron with their new release, offering seven new security features focused on protecting data being virtualized, moved to the cloud, or containerized. This includes a secure execution environment, which features dedicated security processing hardware with physical isolation; and asymmetric roots of trust, which grants authenticated revocation of root keys.

Here’s a quick rundown of the other new security features of the Micron 7400 Pro:

For our SQL Server transactional benchmark, the Micron 7400 Pro was placed in the middle part of the leaderboard with 12,648 TPS.

With Sysbench average latency, the Micron 7400 Pro posted 11. 19ms, which was good enough for 3rd and slightly behind the Samsung PM9A3 and Memblaze drives.

In our first VDBench Workload Analysis, Random 4K Read, the Micron 7400 Pro had a peak performance of 1.01 million IOPS at a latency of 502.9µs, placing 3rd among the tested drives.

For VDI Linked Clone (LC) Boot, the Micron 7400 Pro performance took a huge spike in latency (similar to the Samsung PM9A3), though it leveled out around 38K IOPS. It eventually peaked at 80,173 IOPS with 197.7µs.

For VDI LC Monday Login, the Micron 7400 Pro continued its struggles, showing a huge spike in latency around the 20K IOPS mark, eventually ending at 12,664 IOPS at 1,260µs in latency.

Overall, the Micron 7400 Pro series is a solid entry into the company’s PCIe Gen4 enterprise SSD portfolio, featuring capacities up to 7.68TB, three different form factors, the company’s own 96-layer 3D TLC NAND, and their own controller. Micron indicates that these drives are ideal for organizations who want to migrate their content from their older data center technology to NVMe and flash-optimized form factors. Besides the read-intensive Pro model, the new 7400 line is also available in a “mixed-use” version dubbed “MAX”, making it more suitable for harsher workloads due to its higher much higher endurance rating. 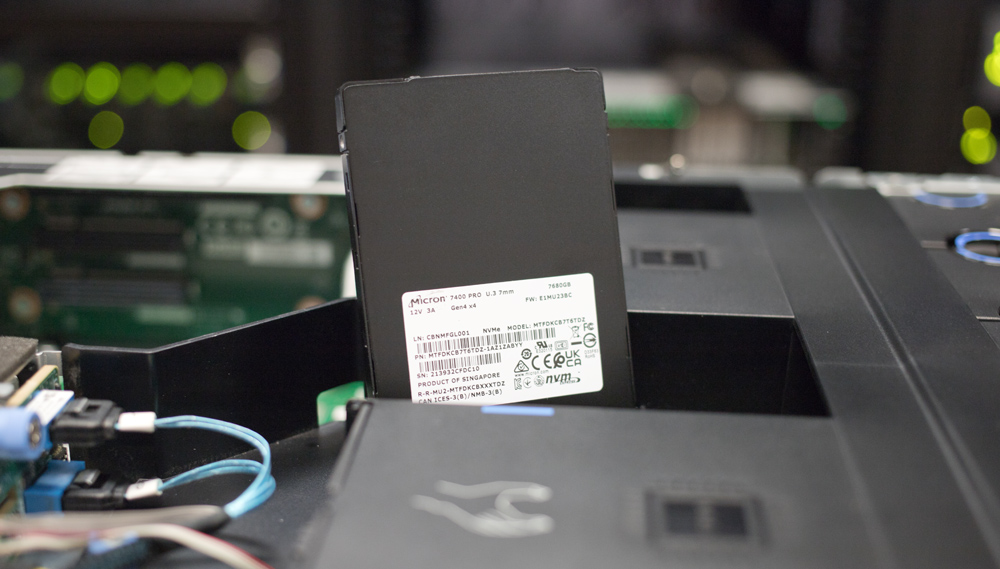 For performance, the 7400 Pro had a strong overall showing during our benchmarks. We tested the new Micron drive against four other PCIe Gen4 enterprise 7.68TB SSDs with similar specifications and intended use cases: the KIOXIA CD6, Samsung PM9A3, Memblaze 6920, and Solidyme P5510. We looked at both application workload analysis and VDBench workloads.

In our Sysbench tests, we saw the 7400 Pro performed in the upper part of the leaderboard with aggregate scores of 10,744 TPS, 11.19ms in average latency, and 22.05ms in a worst-case scenario; all of which took the top spot. Results were similar during our SQL Server transactional benchmark, posting 12,648 TPS and an average latency of 3.5ms.

Next up were our VDI Clone tests, Full and Linked, where its performance was uneven. In Full Clone, we saw 196K IOPS in boot, 128K IOPS in Initial Login, and 91K IOPS in Monday Login. In Linked Clone, the new Micron drive really struggled, showing a peak of 80K IOPS in boot and just 7K IOPS in Monday Login. Initial Login continued this trend, showing a huge spike in latency at the 20K IOPS mark, eventually ending at 12K IOPS.

The Micron 7400 Pro is a solid-performing drive with excellent security features, making it quite clear that Micron is back in the SSD innovation game.