Intel Pro 2500 Series are SSDs designed largely for enterprise client solutions (desktops, notebooks) that require reliability, power-efficient performance, enhanced data security, and remote manageability. While the Intel 730 SSDs are catered towards enthusiasts and the Intel 530's demographic is more mainstream consumer, the Pro 2500 series (and the Pro 1500 Series before it) are specifically architected for businesses who need to deploy a large number of drives into their organization. Intel's new Pro 2500 Series features quoted throughput up to 540MB/s and a random IOPs up to 80,000, all the while offering low-power modes to extend battery life and improve the mobility of the drives. For example, when the new Pro 2500 Series SSDs are combined with the Intel Core vPro Platform, Intel states that power consumption can be reduced by substantially: from milliwatts to microwatts.

Intel Pro 2500 Series are SSDs designed largely for enterprise client solutions (desktops, notebooks) that require reliability, power-efficient performance, enhanced data security, and remote manageability. While the Intel 730 SSDs are catered towards enthusiasts and the Intel 530's demographic is more mainstream consumer, the Pro 2500 series (and the Pro 1500 Series before it) are specifically architected for businesses who need to deploy a large number of drives into their organization. Intel's new Pro 2500 Series features quoted throughput up to 540MB/s and a random IOPs up to 80,000, all the while offering low-power modes to extend battery life and improve the mobility of the drives. For example, when the new Pro 2500 Series SSDs are combined with the Intel Core vPro Platform, Intel states that power consumption can be reduced by substantially: from milliwatts to microwatts. 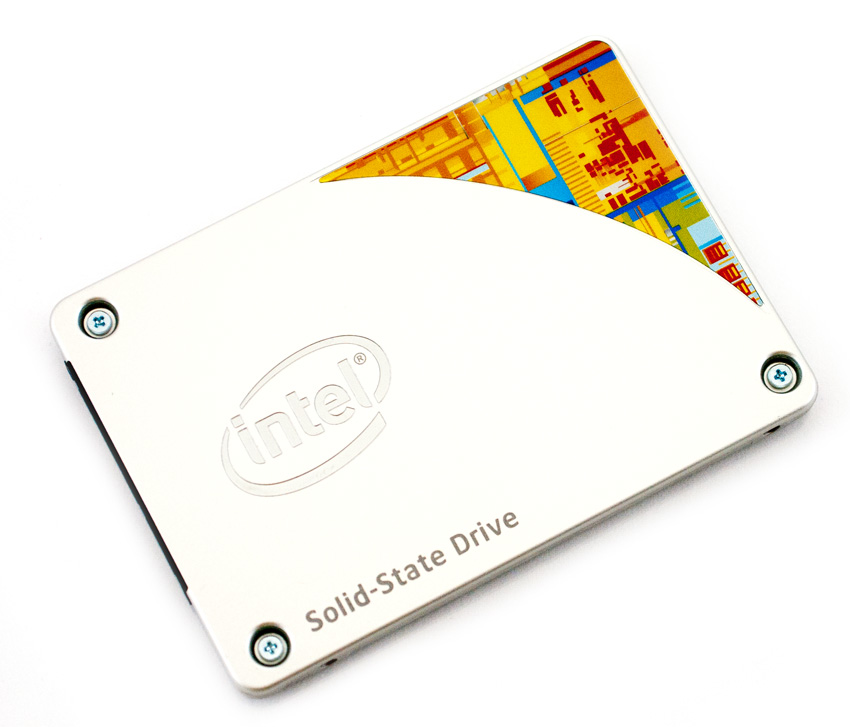 The Intel SSD Pro 2500 Series uses hardware-based 256-bit AES encryption engine that encrypts and decrypts data without surrendering performance. To allow users to have policy-based control of this encryption, the Intel SSD Pro 2500 SSDs are compatible with TCG’s Opal version 2.0 features and they also support Microsoft eDrive. Another major feature of the new Intel line is the ability to combine Intel vPro Technology, Intel Setup and Configuration Software, and security software, to enable the drive with remote manageability. This enables IT administrators to monitor and report the drive’s health, track assets, and remedy faults, which are incredibly useful features clients.

Like it did with the design of its consumer-branded SSDs last year, Intel has put its focus on a much nicer design for its enterprise-grade SSDs.  That said, Intel Solid-State Drive Pro 2500 Series have a very sleek, modern look with its greyish-silver, all metal enclosure. As is the case with its other SSDs, the faux silicon wafer sticker is also a nice touch. 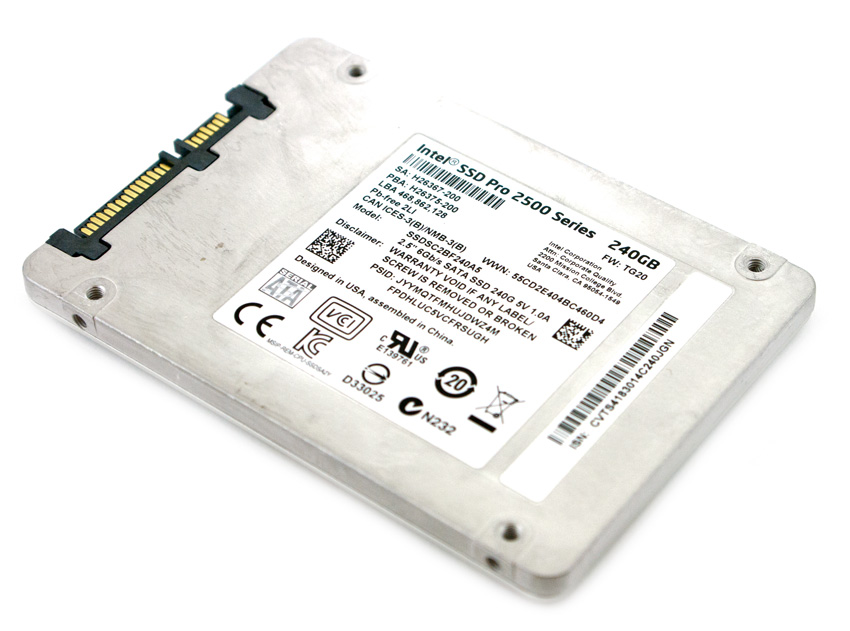 Its 7mm z-height allows it to support thinner notebook designs and other systems needing the smaller form factor. The Pro 2500 Series can be easily mounted with the two screw holes on each side of the drive.

The Intel Solid-State Drive Pro 2500 Series has the standard power and Serial ATA connectors, which is SATA3 (6Gb/s) and is backwards compatible with SATA, though with a bandwidth limitation. The inside of the drive is easily accessed by removing the four Phillips head screws on the top of the drive. Under the hood, you will see that the Intel Pro 2500 makes use SK Hynix NAND as well as a SandForce controller. The use of Hynix NAND is of course interesting as Intel still has ownership of a NAND fab in cooperation with Micron. The back side of board has 8 additional NAND packages, which makes a grand total of 16.

Our first test measures 2MB sequential performance. Both the Intel Pro 2500 repeating and random configurations performed towards more or less in the middle of the pack, posting read and write speeds of 502.2/497.3MB/s and 469.9MB/s and 268.8MB/s respectively. The 850 PRO 1TB was the top performer in the read column, while the Samsung SSD Evo took top spot in writes. Looking at our 2MB random transfer performance tests, the Intel Pro 2500 (repeating) scored an impressive, top-performing 500MB/s for reads read and 465.1MB/s write, while the random configuration posted a respectable 485.9MB/s read; however, it again fell short in the write column with 274.2MB/s write. 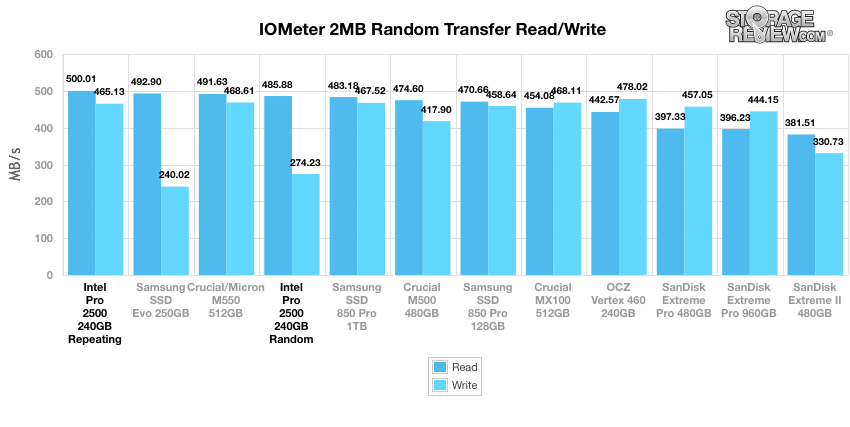 When measuring IOPS, the Intel Pro 2500 showed similar rankings near the bottom in the read column, though it performed a bit better in write performance.

Comparing write latency, the Intel Pro 2500 repeating and random configurations ranked at near the middle and at the top of the leaderboard for average latency, respectively, but both at the bottom for max latency as shown in our charts below. 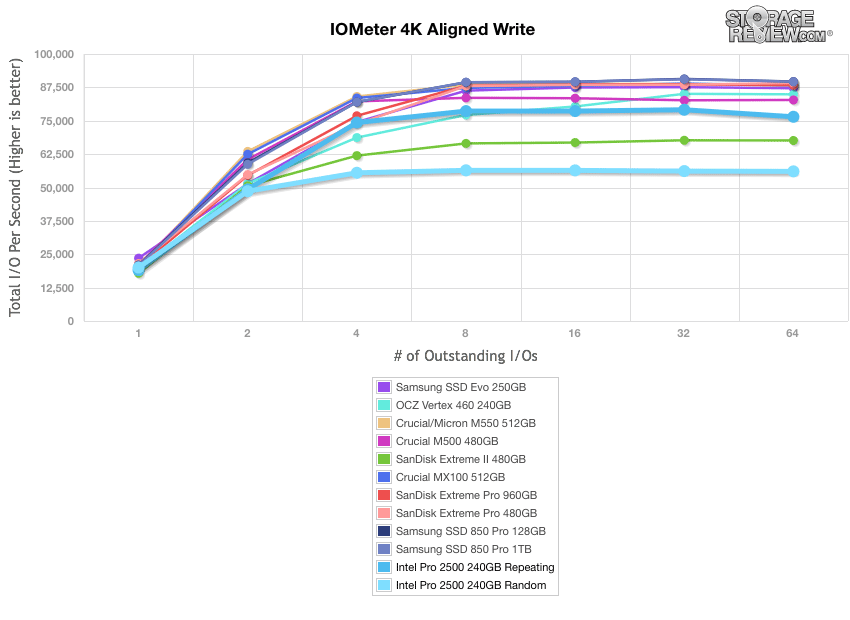 The first is our database profile, which consists of 67% read and 33% write workload mix primarily centered on 8K transfer sizes. In this benchmark, the Intel Pro 2500 repeating and random posted Q128 results of 37,272 and 21,912 IOPS respectively, which were ranked in the upper middle and bottom of the pack. The web server profile is read-only, with transfer sizes ranging from 512B to 512KB. The Intel Pro 2500 repeating and random posted throughput that ranked in the middle and bottom of the pack, respectively. In our file server profile, which has 80% read and 20% write workload spread out over multiple transfer sizes ranging from 512-byte to 64KB, the Intel Pro 2500 repeating configuration picked up a bit with an IOPS of 30,964. The last profile looks at workstation activity, with a 20% write and 80% read mixture using 8K transfers. By Q128, the Intel Pro 2500 repeating came in near the upper middle of the pack while the random configuration took second last place. While the results of synthetic benchmarks are important to identify the key strengths and weaknesses of a drive, performance in these tests does not always translate directly into real-world situations. To get a more detailed idea on how the Intel Pro 2500 line will perform in the field, we will chart StorageMark 2010 HTPC, Productivity, and Gaming traces against comparable drives. Higher IOPS and MB/s rates with lower latency times are preferred.

In our HTPC profile, the Intel Pro 2500 boasted some very impressive results, ranking at the very top of the leaderboard by a noticeable margin in all of our tests with 9,775 IOPS, 451.2MB/s and an average latency of only 0.776ms. In our Productivity trace, Intel Pro 2500 trailed only the Samsung Pro drives, with another impressive performance at 10314 IOPS, 301.7MB/s and an average latency of 0.76ms. In our gaming profile, the Intel Pro 2500 performed on par or better with all of the other comparables, with the exception of the Samsung Pro drives, which were the only SSDs that set themselves apart from the pack. The Intel Pro 2500 line of SSDs is the 2nd entry in its family and successor to the Pro 1500 Series. And like the Pro 1500 Series, it ships in an abundance of mid-range capacities and in two different form factors: 120GB, 180GB, 240GB, 360GB, and, 480GB for 2.5 inch, and 180GB, 240GB, and 360GB in M.2. When it comes down to it, however, the 240GB model that we reviewed was somewhat of a mixed bag performance-wise, as it was very impressive in some categories and dead last in others. This is largely due to the aged SandForce controller which has always been great with compressible data but has since been surpassed in many areas by more modern SSD controller technologies.

Diving into the details of the performance, the Intel Pro 2500 SSDs showed mixed results during our consumer synthetic workloads, ranking usually near bottom half of the leaderboard including in our 4K random transfer tests; however, our larger 2MB benchmarks told a different story boasting some very good results, particularly in random transfers. In the other synthetic benchmarks, which compare the SSDs in a series of server mixed-workloads, the Pro 2500 series posted mediocre results especially when testing with fully incompressible data (random). Its performance picked up significantly in our in our real-world benchmarks. In our real world traces though, the drive boasted very good performance with recorded numbers ranking in the top of the pack.

Overall the drive is a good addition to Intel's Pro series, but without new controller technology it's starting to show its age as others surpass Intel purely on a performance scale. Buyers of the Pro series aren't just in it for throughput though. For large IT departments Intel offers a lot of manageability and control for this enterprise client target market, making it easy to deploy and monitor en masse. Reliability and management trump performance in this market, so lagging performance in some scenarios isn't a huge deal, given these drives are likely replacing hard drives or much older, lower capacity SSDs.

The Intel Pro 2500 Series line of SSDs provides IT departments with a drive that's easy to deploy and manage with a reasonable performance and cost profile, while still offering Intel's pedigree in reliability and support.