The Synology DiskStation DS414slim is a direct replacement for the DiskStation DS411slim that we reviewed about three years ago. It is a 1.2GHz 4-bay SOHO NAS optimized to be as compact as possible while still providing ample storage and modern features. It houses 2.5" drives and can accommodate a maximum of 6TB through four 1.5TB SSDs. At first glance it is almost identical to the DS411slim; it has the same dimensions and general layout. However, users can look forward to new USB 3.0 connectivity and a few new features.

The Synology DiskStation DS414slim is a direct replacement for the DiskStation DS411slim that we reviewed about three years ago. It is a 1.2GHz 4-bay SOHO NAS optimized to be as compact as possible while still providing ample storage and modern features. It houses 2.5" drives and can accommodate a maximum of 6TB through four 1.5TB SSDs. At first glance it is almost identical to the DS411slim; it has the same dimensions and general layout. However, users can look forward to new USB 3.0 connectivity and a few new features. 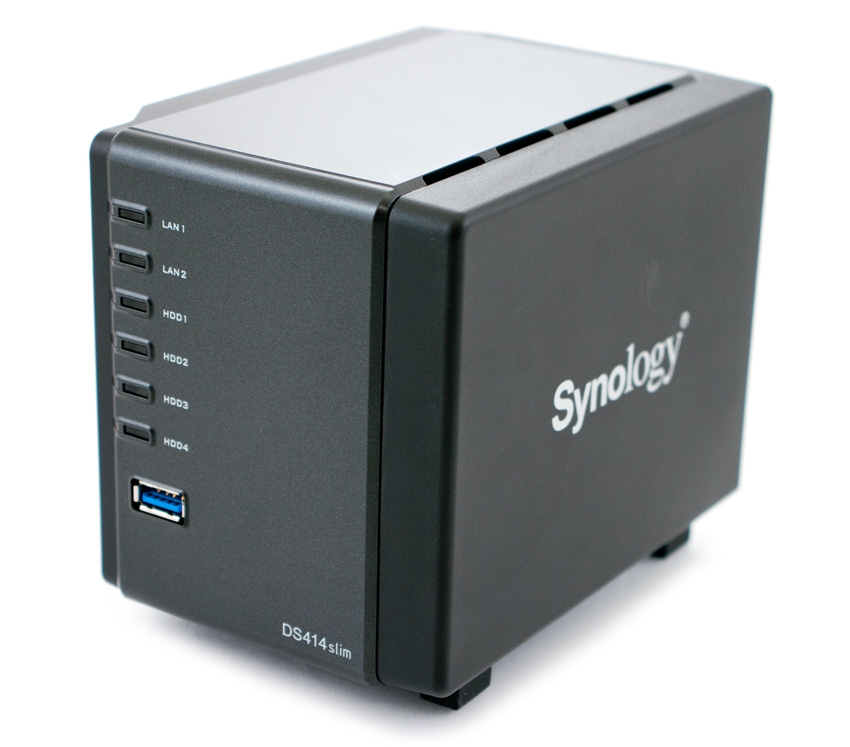 As with other Synology NAS systems, users can manage files across Windows, Mac and Linux operating systems through its award-winning DiskStation Manager. Users can also access and manage their DS414slim with mobile devices (including iOS and Android) via Cloud Station. It comes with Photo Station, Audio Station, and Video Station, all of which facilitate the management of media and easily connect users to social media. The DS414slim can also be bundled with backup solutions like the Synology Data Replicator and Apple Time Machine (both of which are free) for PC and Mac users, respectively.

The DS414slim is roughly identical in appearance to the previously reviewed DS411slim; it is a small black 4-bay console. The face of the device has six LED lights corresponding to the two LAN inputs and the four drives (top to bottom), as well as one USB 3.0 port. 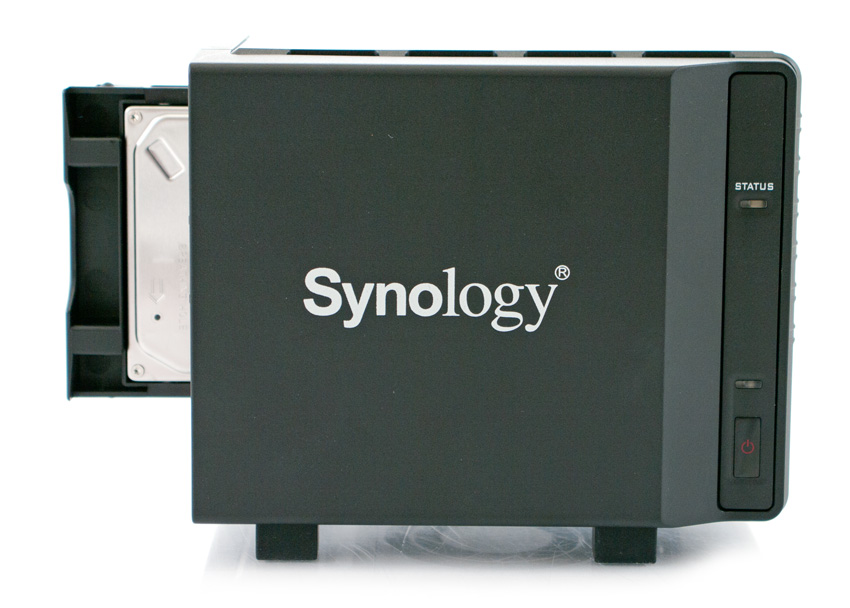 Both of the sides of the device have branding, but the left side has two LED lights corresponding to the status of the system and the power, as well as a power button (top to bottom). 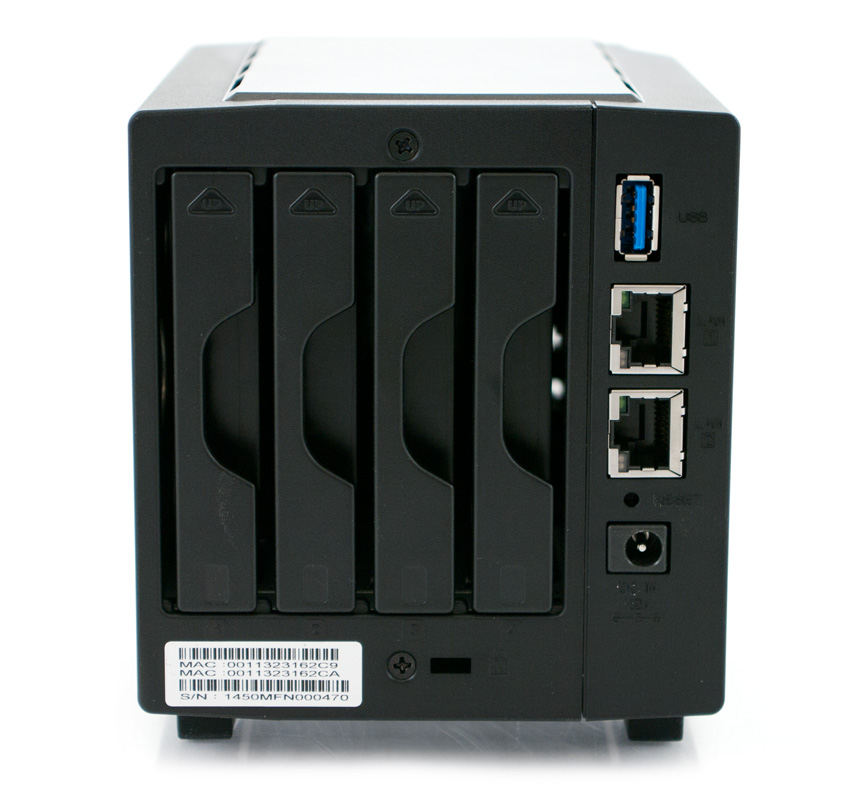 The back of the device is where the user can access the actual drives; it has a standard 4-drive bay system with the drives configured vertically and a tool-less installation. To the right of the drives is a USB 3.0 port, two LAN inputs, a reset button, and the AC power adaptor (top to bottom).

We tested both CIFS and iSCSI performance using WD Red 2.5" drives, which are popular hard drives suited for operation in NAS environments.

In order to fairly evaluate the performance of the Synology DiskStation DS414slim we need an environment that ensures that the NAS is the I/O bottleneck rather than the network. Therefore this review employs a Lenovo ThinkServer RD240 running multiple Windows Server 2012 VMs in an ESXi 5.1 environment connected via a quad-port Intel i350-T4 NIC through a Netgear ProSafe GS752TXS switch.

Our shared storage benchmark process preconditions each NAS/SAN into steady-state with the same workload the device will be tested with under a heavy load of 16 threads with an outstanding queue of 16 per thread, and then tested in set intervals in multiple thread/queue depth profiles to show performance under light and heavy usage. Since HDD-based shared storage reaches its rated performance level very quickly, we only graph out the main sections of each test.

Our next benchmark measures 100% 8K sequential throughput with a 16T/16Q load in 100% read and 100% write operations. The Toshiba 1TB configured in iSCSI was by far the worst drive for this test, scoring 1,463IOPS and 43IOPS for read and write, respectively. Both of the SMB configured drives performed very well; they were neck and neck in both read and write functions, with only a small margin differentiating either.

Compared to the fixed 16 thread, 16 queue max workload we performed in the 100% 4k write test, our mixed workload profiles scale the performance across a wide range of thread/queue combinations. In these tests, we span workload intensity from 2 threads and 2 queue up to 16 threads and 16 queue. The WD Red 1TB configured in iSCSI dominated for the duration of the expanded 8k 70/30 test, peaking at around 570IOPS. The SMB configured drives were the slowest drives for most of this benchmark. 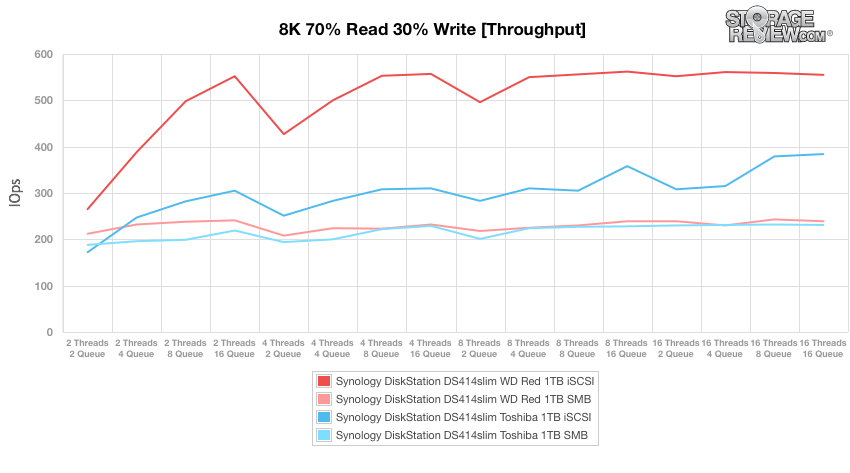 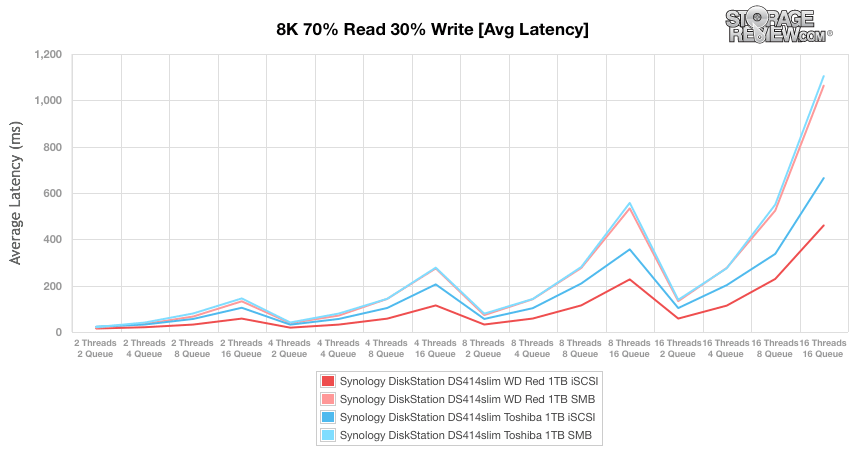 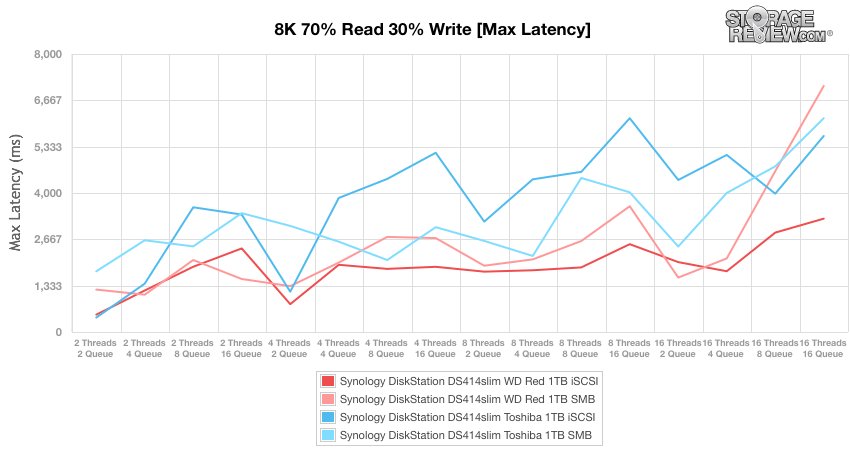 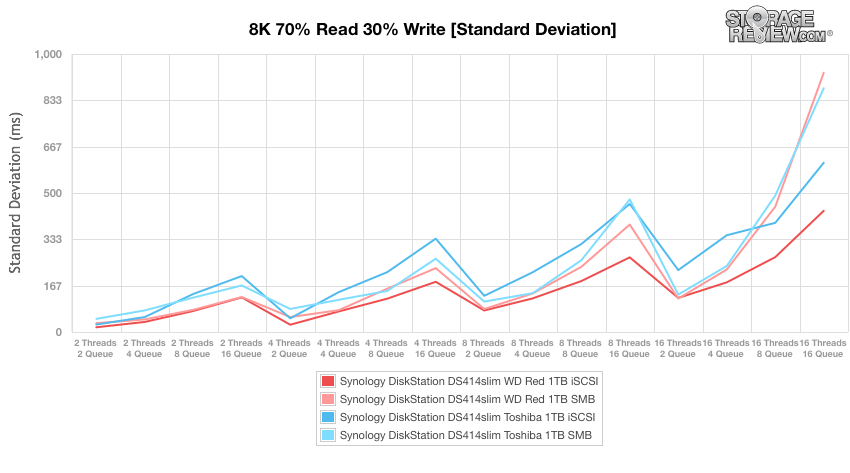 The last test in our Enterprise Synthetic Workload testing is the 128k test, which is a large block sequential test that shows the highest sequential transfer speed for a platter drive. Looking at the 128k performance of 100% write and 100% read activity, the SMB configured drives were the top performers by far in both read and write functions; they reached ~157kIOPS for read and ~120kIOPS for write whereas the iSCSI configured drives didn't exceed 61kIOPS read or 76kIOPS write.

The Synology DiskStation DS414slim is an updated version of the DS411slim; it carries with it the ability to achieve much faster transfer speeds and it allows users to make use of USB 3.0 connectivity for even faster physical transfers. Physically it is very similar to the DS411slim; it is very sleek and minimalistic in design and takes up very little space. It comes with the customary DiskStation Manager and can be used with popular backup solutions like Synology's Data Replicator, Apple's Time Machine and dozens of third party applications.

In terms of performance the DS414slim performed pretty well with generally slower 5400RPM 2.5" HDDs that its form-factor limits it to. Depending on the workload requirements, both iSCSI and CIFS/SMB had weaknesses and strengths. For more sequential loads like file sharing or using the system as a backup target CIFS/SMB offered the best performance. For more random workloads though iSCSI was the leader, which might cover a volume used as scratch space or perhaps using the DS414slim for a small database or VM in a small business environment. We were impressed though that our sequential transfer tests in RAID10 measured much higher than Synology's own figures for this model. The real magic through is form factor, buyers for this unit are more impressed by the compact footprint than the performance numbers.

The DS414slim is a great option for any user that wants a small SOHO NAS with a full feature-set and pretty good performance given the reliance on small form factor drives.