The Intel SSD 520 is targeted at the client user, but with the backing of the Intel brand and the quality of engineering that went into this SSD, it’s definitely going to creep into the enterprise as well. As seen in our client Intel SSD 520 review, the SandForce-based SSD drives great performance, while offering co-developed custom firmware and Intel’s best NAND. Within the enterprise, the SSD 520 will find its way not just into workstations and other PC duty, but into servers and other environments where speedy storage in largely read-oriented scenarios can really shine.

The Intel SSD 520 is targeted at the client user that, but with the backing of the Intel brand and the quality of engineering that went into this SSD, it’s definitely going to creep into the enterprise as well. As seen in our client Intel SSD 520 review, the SandForce-based SSD drives great performance, while offering co-developed custom firmware and Intel’s best NAND. Within the enterprise, the SSD 520 will find its way not just into workstations and other PC duty, but into servers and other environments where speedy storage in largely read-oriented scenarios can really shine.

One of the most obvious concerns in the enterprise, especially when letting a MLC SSD work its way into the ecosystem, is reliability. There’s a certain willingness in some cases to trade off endurance from an eMLC or SLC-SSD in exchange for a lower-priced SSD, but the drive still needs to be stable. To that end, as discussed in detail in the client SSD 520 review, Intel has done over a year’s worth of validation on the hardware, including the SandForce processor. Intel has also run the 520 through over 5,000 unique tests in the validation process and verified enterprise compatibility in over 150 host systems.

The enterprise user doesn’t have to give up all the endurance benefit of traditional eMLC and SLC enterprise SSDs with the 520 though. The SSD 520 can be over provisioned, to both provide increased endurance (TBW) and significantly improved performance. Over-provisioning is just a fancy term for reducing the amount of available storage space for the system, reserving more NAND for the controller to perform background maintenance. You give the controller enough reserved NAND to handle garbage collection processes during constant activity without slowing things down as much, which can significantly improve performance and boost the lifespan of the drive. The downside though is when using increased OP is a linear reduction in drive capacity, therefore enterprise users need to carefully balance price, performance, and longevity with their specific workloads and requirements. 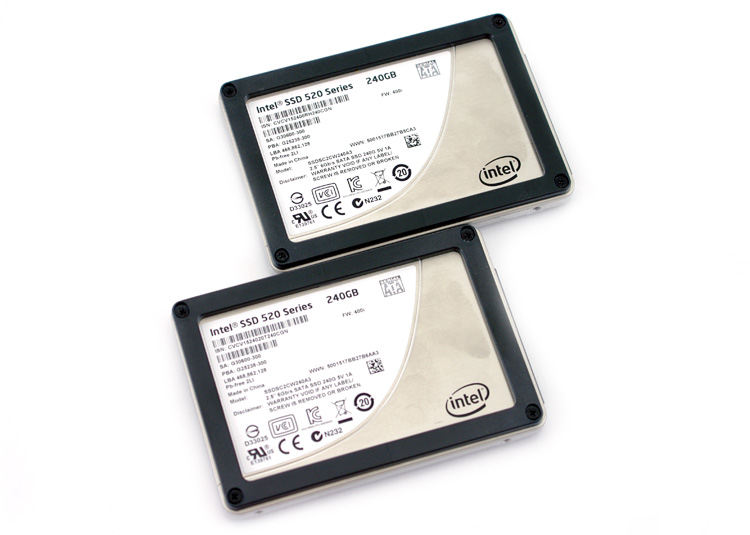 When StorageReview evaluates SSDs from an enterprise perspective, the focus is entirely on steady state performance, or how the drive will perform when hammered at with a specific workload 24/7. With the Intel SSD 520, we benchmarked performance in steady-state with stock over provisioning as well as 20% over-provisioning.  At the 20% OP state, the 240GB Intel SSD 520 turns into a 192GB SSD. To level the playing field, we over-provisioned each primary drive we tested in this review, including the Intel SSD 520, OCZ Vertex 3 Max IOPS as well as the enterprise-targeted eMLC-based Intel SSD 710.

Flash media for the enterprise needs to be tested in a different manner than standard platter drives and even client-based SSDs. Flash performance changes the longer you write to a drive and speeds taper down until the drive hits its steady state speed. In an enterprise setting, initial burst is hardly relevant if after one hour of use the drive will never see that speed again. This is where steady state benchmarking comes in, showing how the drive performs when under a 24/7 load. For this reason, all of the following benchmarks were pre-conditioned and recorded in a steady-state mode.

We used our StorageReview Enterprise Testing Environment to benchmark the SSD 520; accurately representing its capabilities in an enterprise environment. The enterprise testing platform is based around a Lenovo ThinkServer RD240, equipped with dual Intel Xeon X5650 processors, running Windows Server 2008 R2. For single-drive benchmarks we connect each SSD through an LSI SAS 9211-8i HBA to measure performance without any influence of caching. All IOMeter figures are represented as binary figures for MB/s speeds.

We dive straight into our mixed-workload tests to compare the Intel SSD 520 and OCZ Vertex 3 Max IOPS against the Intel SSD 320, SSD 510, and SSD 710 in a series of server workloads with a static queue depth of 32. All tests are performed in steady-state. Each of our server profile tests has a strong preference towards read activity, ranging from 67% read with our database profile to 100% read in our web server profile. 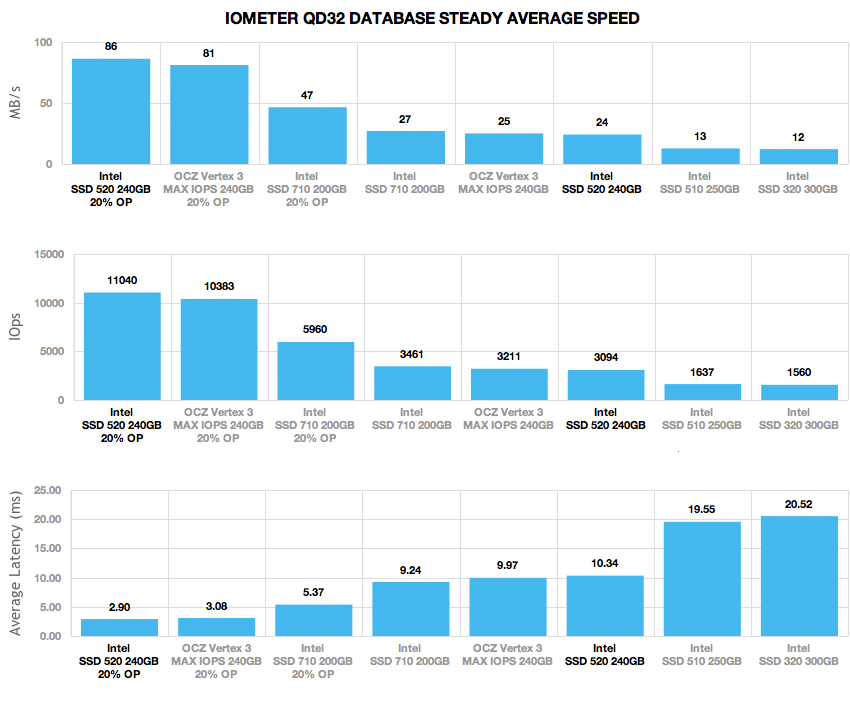 Looking at stock performance in our Database profile, the Intel SSD 520 averaged 3,094 IOPS in steady-state versus 3,211 from the OCZ Vertex 3 Max IOPS. Out of each of these drives in stock configuration the eMLC-based Intel SSD 710 gave the highest score of 3,461 IOPS. 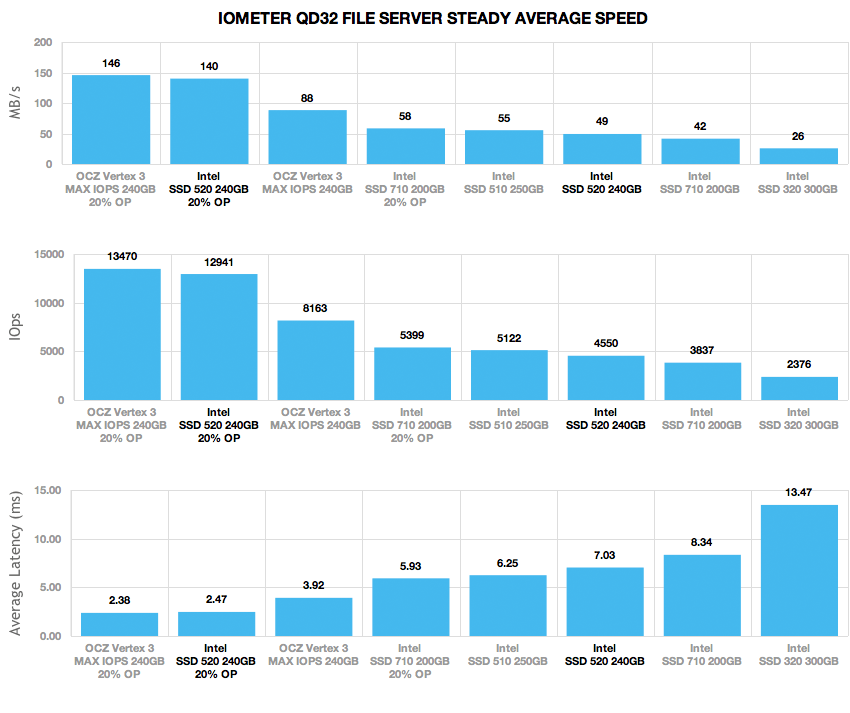 In our File Server profile, the Toggle NAND inside the OCZ Vertex 3 MI showed a clear strength, measuring the highest out of the drives in stock configuration with a speed of 8,163 IOPS compared to 4,550 IOPS from the Intel SSD 520. 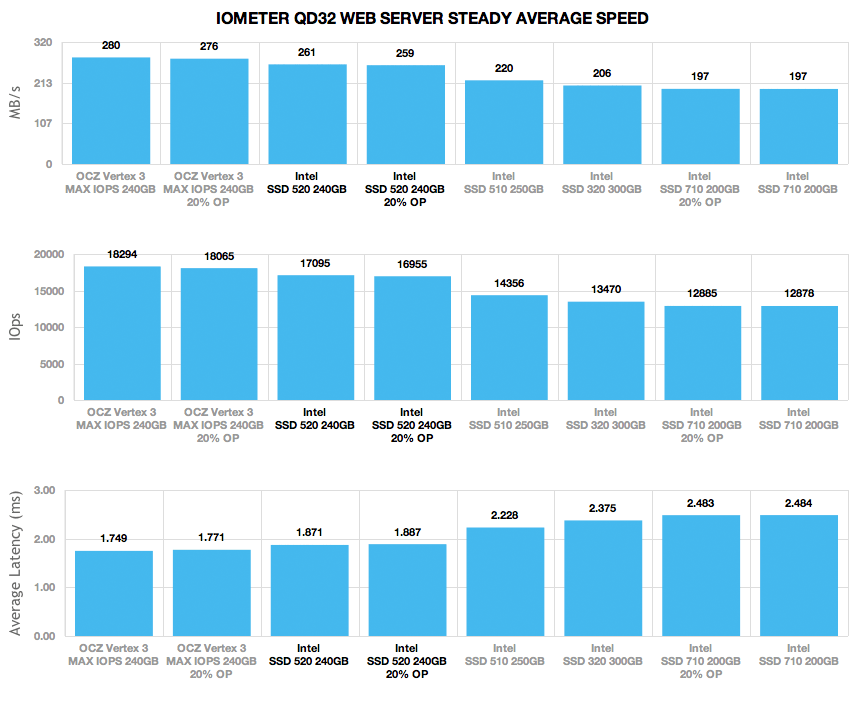 In our Webserver profile the Intel SSD 520 measured 17,095 IOPS in stock configuration compared to 18,294 IOPS from the OCZ Vertex 3 Max IOPS. With exceptionally strong read-performance from the SandForce SF-2200 processor, these drives offered a clear advantage over the previous generation Intel SSD 510 as well as the SATA 3.0Gb/s Intel SSD 320 and SSD 710.

Out of all of our server profiles, the Webserver is unique in that it is 100% read-only. This means that over-provisioning for improved write speeds in this scenario actually hurts read performance by restricting the amount of available NAND for the processor to work with on the faster SSDs. In this case the 20% over-provisioned Intel SSD 510 dropped from 17,095 to 16,955 IOPS, the Vertex 3 MI dropped from 18,294 to 18,065 IOPS. The Intel SSD 710 stayed relatively flat, changing from 12,878 to 12,885 IOPS. 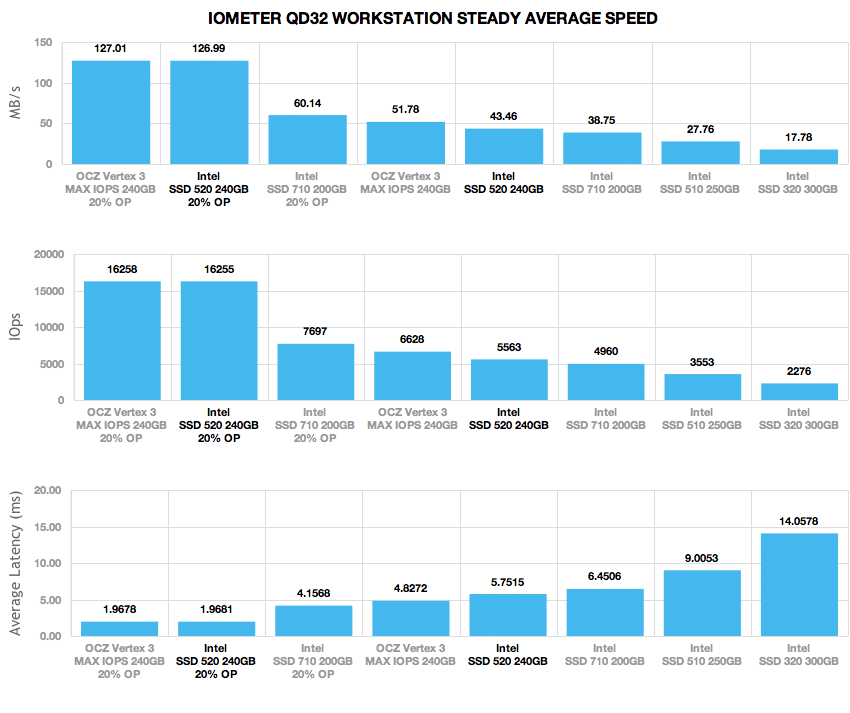 The Intel SSD 520 offers very good steady state performance, offering near parity with the Toggle NAND-based Vertex 3 Max IOPS throughout and generally leading Intel’s SSD 320 and SSD 710 offerings. The strength of the SandForce SF-2200 processor makes sense in many enterprise conditions, given the SATA 6.0Gb/s saturating read speeds and strong write speeds when the SSD has enough reserved space for background activity with over-provisioning. This can be clearly seen in our benchmarks, where performance substantially improves over stock-configuration.

While not compared directly in this review, the Intel SSD 520 with 20% over-provisioning starts to compete at the performance level of some of the industry-leading eMLC and SLC-based enterprise SSDs on the market. The reason we don’t compare these drives head to head is the endurance of MLC compared to eMLC or SLC NAND is vastly different. What this means is that under extremely write-heavy conditions, an SSD equipped with MLC NAND would be exhausted rapidly, when compared to an enterprise-grade SSD. Under the right conditions though, with a light to medium workload, an MLC SSD makes sense for enterprise conditions, offering more impressive TCO than eMLC or SLC alternatives.

The Intel SSD 520 is industry-leading fast and offers the reliability enterprises require for both workstation and light enterprise SSD use. With over provisioning users can tweak the 520 for even better performance and endurance. While not living up to eMLC and SLC SSD endurance, the cost savings are meaningful, making the SSD 520 an interesting alternative where enterprise-specific SSDs are overkill.