The datAshur SD is the world’s first and only PIN authenticated, hardware encrypted USB drive that is designed to securely use iStorage’s MicroSD cards. With the datAshur SD, the ability to quickly and efficiently encrypt an iStorage microSD is now easier than ever. With this PIN-activated device, users and admins will no longer have to worry about the physical exchange of data being stolen. The datAshur offers protection against brute-force hacking and in terms of speeds, states up to 100MB/s read and 95MB/s.

The datAshur SD is the world’s first and only PIN authenticated, hardware encrypted USB drive that is designed to securely use iStorage’s MicroSD cards. With the datAshur SD, the ability to quickly and efficiently encrypt an iStorage microSD is now easier than ever. With this PIN-activated device, users and admins will no longer have to worry about the physical exchange of data being stolen. The datAshur offers protection against brute-force hacking and in terms of speeds, states up to 100MB/s read and 95MB/s. 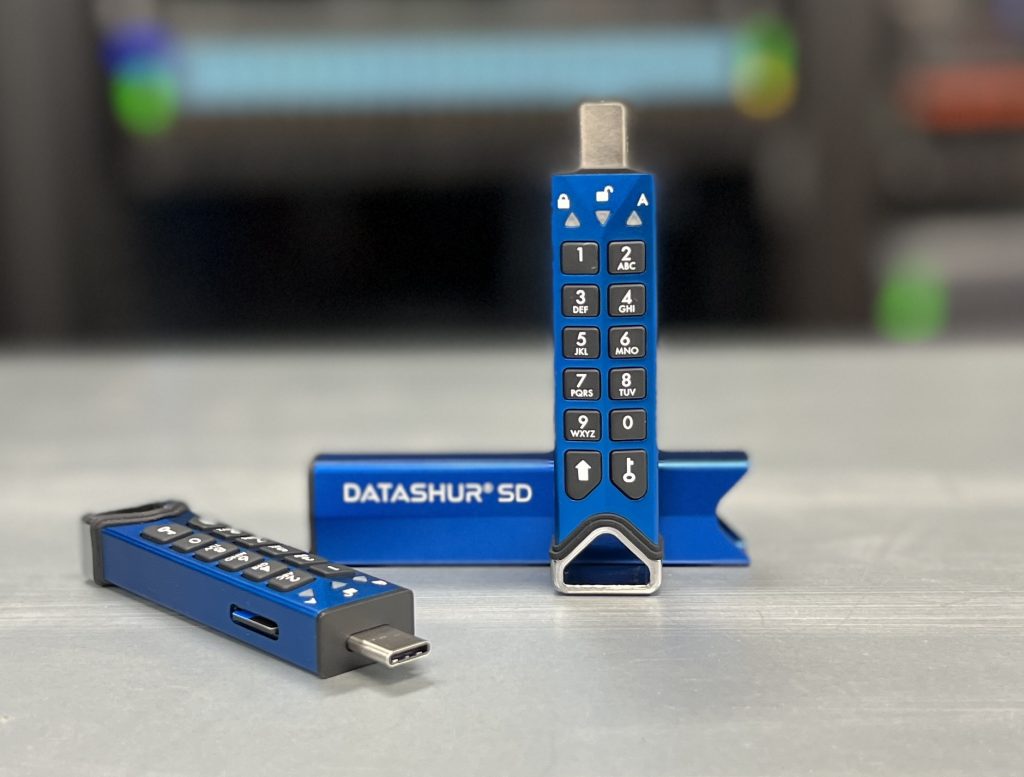 Why the iStorage datAshur SD?

Powering the datAshur is iStorage’s Common Criteria EAL5+ secure microprocessor. This microprocessor is built to protect against hackers and defend against tampering with features including True Random Number Generator, active shield, enhanced protection object, glitch and slope detectors, parity checks, and much more. With this microprocessor, at the helm of this device, it ensures no type of data entry will be gained from unauthorized users. 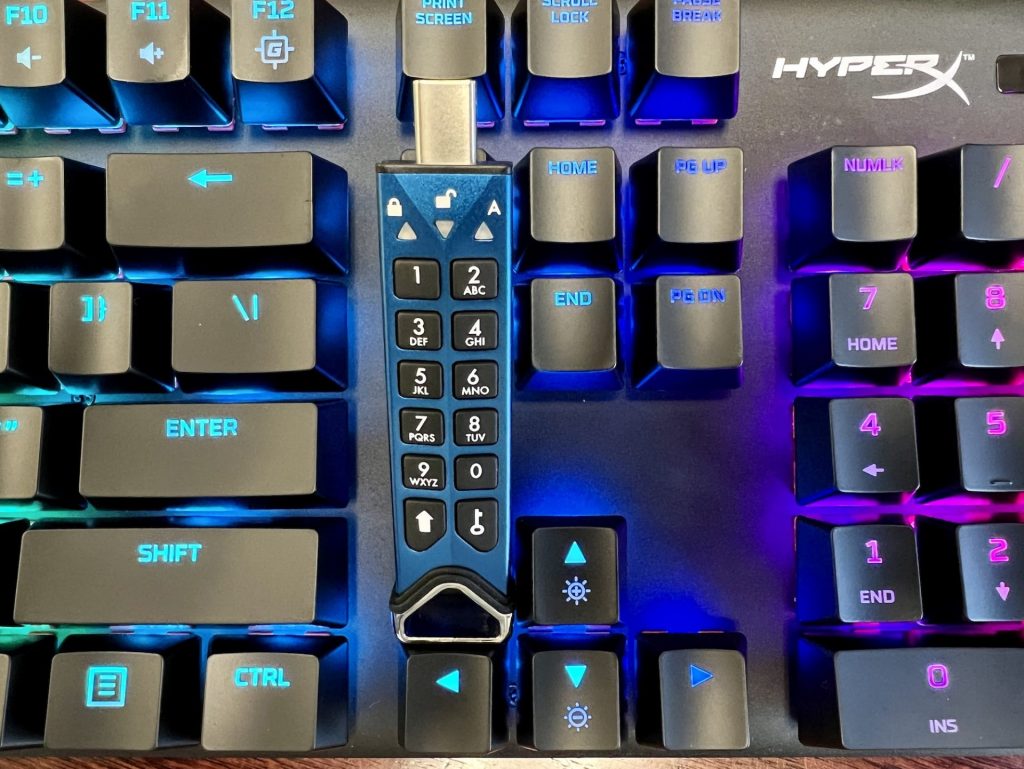 Right out of the box, the datAshur is packaged nice and neat, which does give a more professional feel as upon opening, anyone can see that it wasn’t moving around and there isn’t a risk of it breaking during delivery. In our case, iStorage has sent over a dual pack of them, which gives us a little more versatility to do a review on and talk about showing the various use cases. 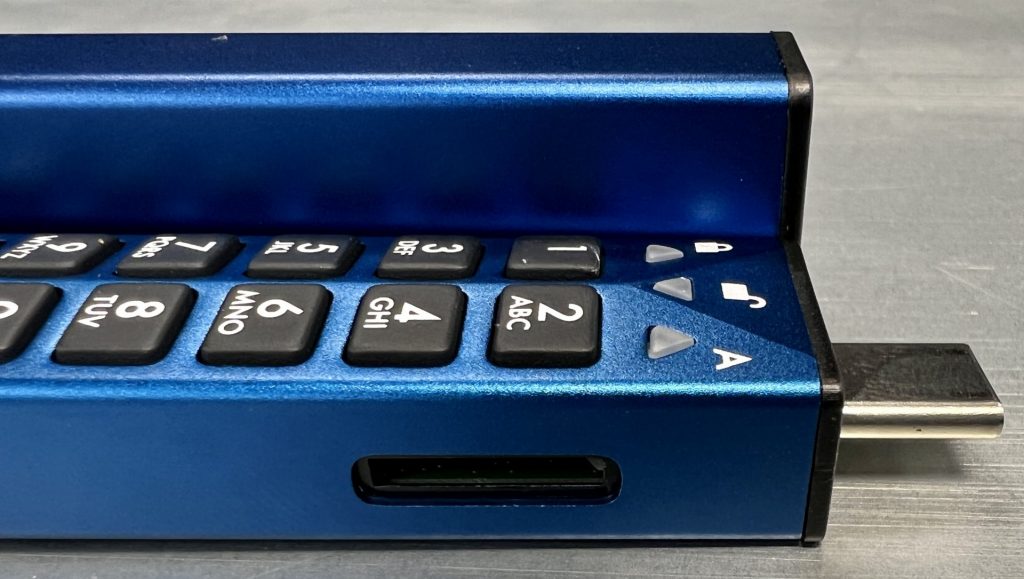 There is also going to be a quick start guide that tells how to unlock and set the admin PIN on the datAshur so it can be used along with how to get through the initial setup steps of formatting and accessing the SD card once inserted.  Lastly, there is the Type-C to Type-A adapter in case a machine doesn’t have Type-C port access.

The physical build on the datAshur is mostly made of aluminum. This aluminum build and case protecting the datAshur SD offers some decent physical protection for the device. The datAshur has been tested to get rugged, shockproof, and crushproof. These simple engineered features are really nice to have as it ensures that if a company hands them out, they can withstand many types of people beating them up.

The build of the datAshur also ensures the device is IP68 certified water and dust-resistant. Part of this is due to the case that the datAshur fits inside of, which has a snug but reasonable fit. iStorage states that the datAshur is also able to withstand extreme weather conditions. 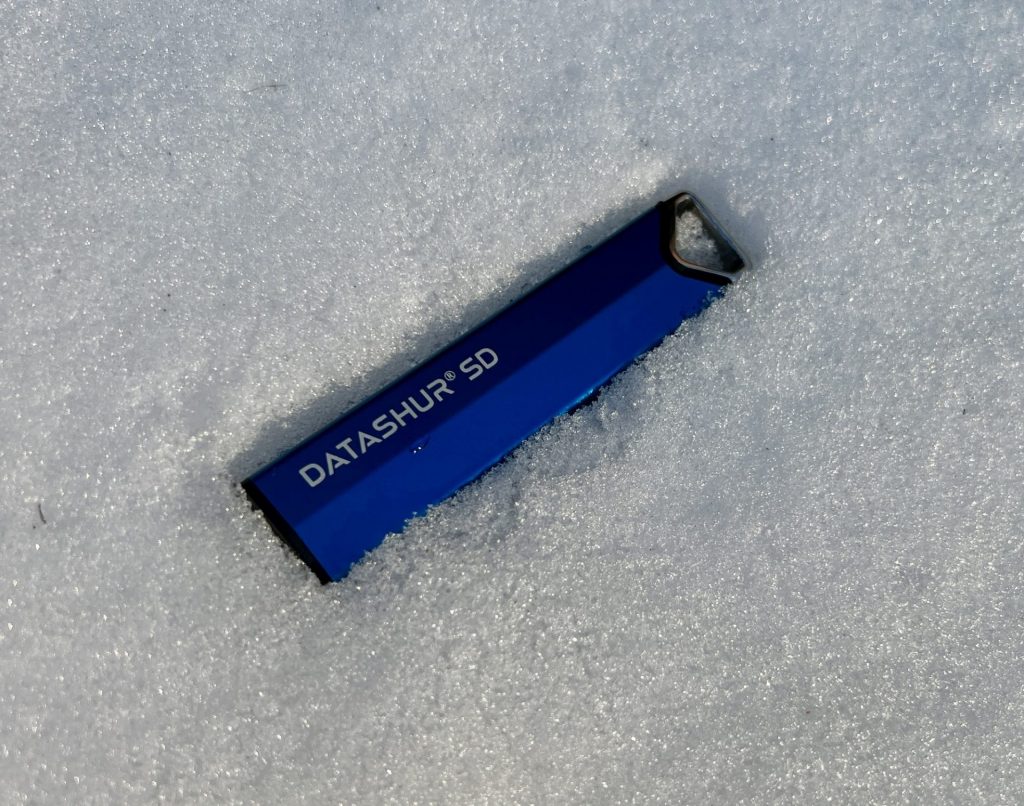 The final part of this build is the Type-C adapter. Usually, when people think of USB size sticks, Type-A is the stereotype, however, to make the performance of the SD card its best, iStorage has put a Type-C port. There is, however, a Type-A port adapter if a device doesn’t have a Type-C port. 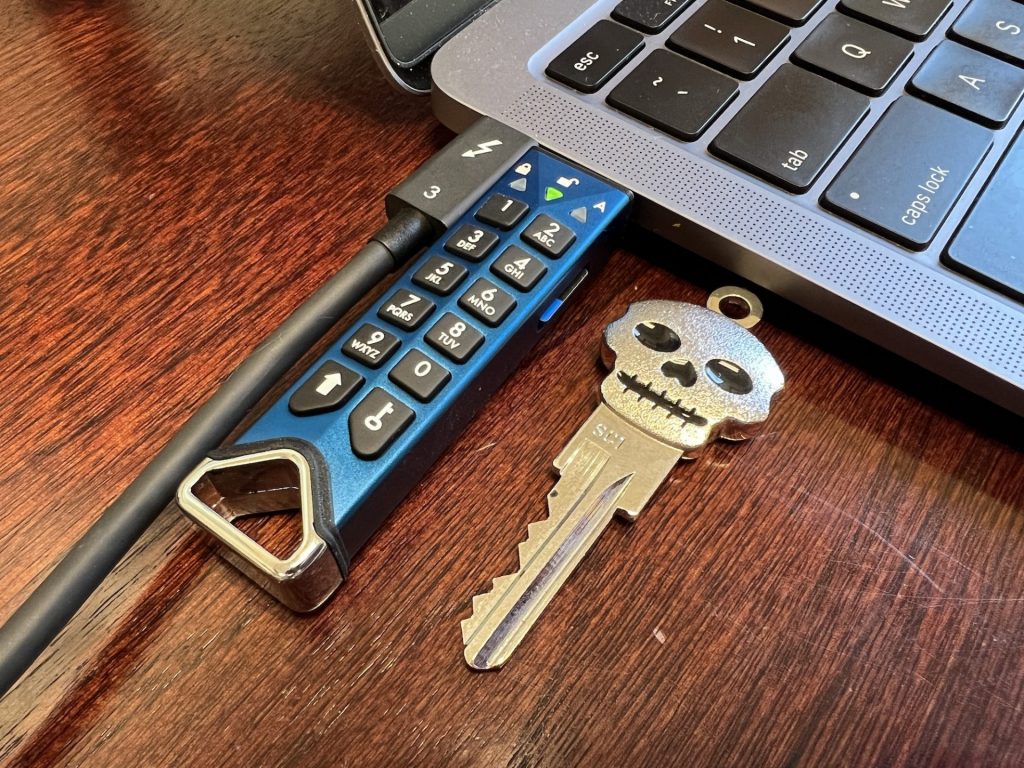 Shifting to the internals of the iStorage datAshur SD, this device offers protection to combat nearly all forms of hacking or breaking into the device. The first feature that iStorage is proud of is the real-time military-grade AES-XTS 256-bit hardware encryption with FIPS PUB 197 validated encryption engine. This type of encryption ensures that physically no one is going to be able to break into this device even if they knew what they were up against. Along with the encryption, the datAshur is FIPS 140-3 Level 3 compliant (pending Q2 2022), meaning that it is currently being tested to prove that governments would be able to use this device to protect against attacks.

With the encryption standard it has, that should be enough for some people, however, iStorage has also made the datAshur SD fight brute force attacks and key logger attacks. iStorage has engineered the datAshur SD to solely use the onboard alphanumeric keyboard which allows the datAshur to use zero software or host involvement making it not vulnerable to brute force or logger attacks. If someone wants to break into an SD card with this device, to also protect against brute force attacks, iStorage has integrated an incorrect PIN timeout. If there are 10 consecutive incorrect PIN entries, the device will lock and only be unlocked with the Admin PIN or recovery PIN if enabled. Following suit, if the Admin PIN is entered incorrectly more than 10 times, all data, PINs, encrypted encryption key will be deleted and lost.

Another feature the datAshur offers are auto-lock, which is an integrated feature that locks the datAshur when it is unplugged from a host device, loses power, or even when IDLE for too long. A self-destruct option that will completely erase all the PINs that are stored on the device along with the encryption key, which once gone will be unable to decrypt any data coming from an iStorage microSD card.

A complete drive reset, will erase all PINs and the encryption key, however, it will randomly generate a new encrypted key, and this process can be repeated as many times as necessary. Even with the ability to whitelist networks; being configured with unique serial number and barcode along with VID/PID, the datAshur SD allows for easy integration on networks and software management.

Now, the performance of this drive isn’t the main selling point, however iStorage still claimed that the datAshur SD and card could reach speeds of up to 100MB/s read and 95MB/s. We performed two simple tests on this device, the first is the Blackmagic Disk Speed Test. On this test, we saw speeds of 84.7MB/s write and 82.6MB/s read, pretty close to those reported by iStorage. 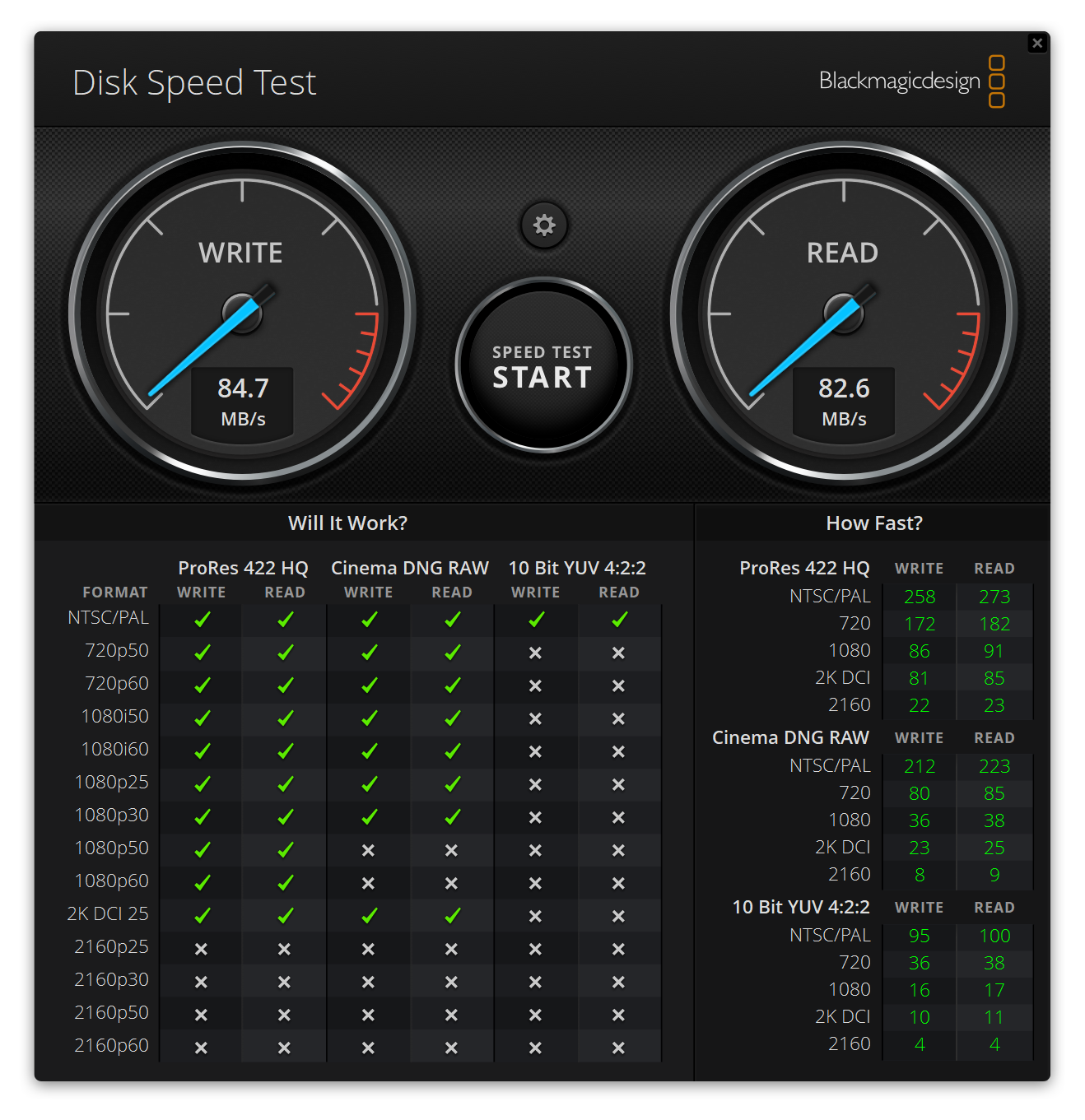 Overall, the datAshur SD is one of the most interesting physical security devices that we have seen. Although it has to be combined with iStorage SD cards, the datAshur SD has some of the best defense mechanisms in terms of stopping and defending data on the SD card. With its military-grade encryption, time-out settings, and government complaint, this device can stop even the best from cracking it. 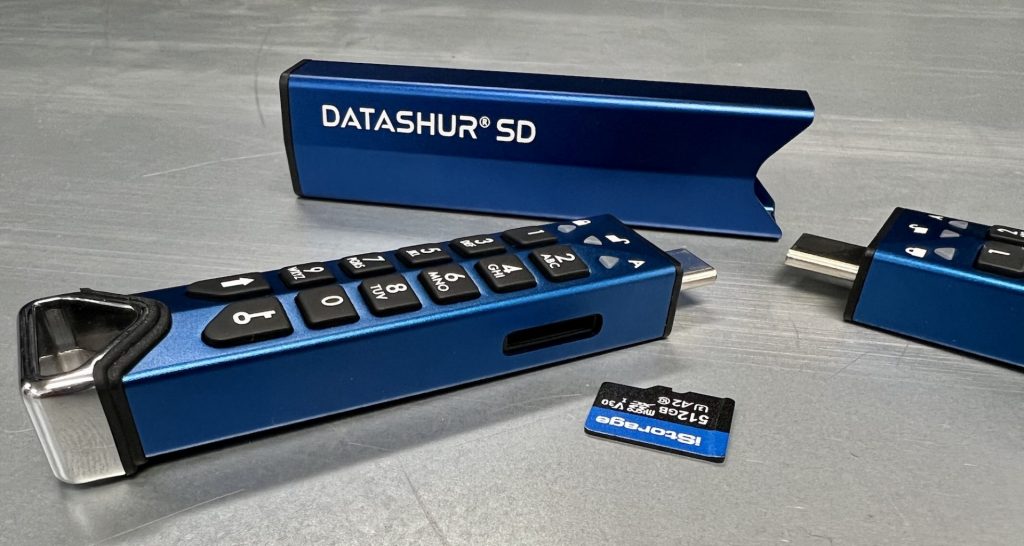 In terms of performance, we saw speeds close to what iStorage reported, however, this device is designed to transfer documents, not download the newest Triple-A title. The speeds for documents will be just fine, and if it does become a problem, you could always ZIP a folder.

With a price tag of £69, or $93 for a single drive (before microSD cost), the iStorage datAshur SD isn’t for everyone. There are however many use cases where a company or end-user needs a device like this where physical data protection is of the utmost importance. For those distinguished secure data needs, this device is going to be a perfect companion.