DDR5 memory is now available in mainstream PCs thanks to Intel’s 12th generation Core and AMD’s Ryzen 6000 chips. In this review, we look at a high-performance Kingston Fury Beast DDR5 desktop memory kit rated to run at 5200MHz, comparing it to other DDR5-5200 kits and benchmarking it at DDR5-4800 to see whether DDR5-5200 is worth extra money.

DDR5 memory is now available in mainstream PCs thanks to Intel’s 12th generation Core and AMD’s Ryzen 6000 chips. In this review, we look at a high-performance Kingston Fury Beast DDR5 desktop memory kit rated to run at 5200MHz, comparing it to other DDR5-5200 kits and benchmarking it at DDR5-4800 to see whether DDR5-5200 is worth extra money.

DDR5 debuted in 2021 as the replacement for DDR4, which had been the mainstream standard since 2015. Higher performance is one of DDR5’s largest advantages; frequencies start at DDR5-4800 next to DDR4’s official maximum of DDR4-3200 for a 50% increase in bandwidth. DDR5 also promises lower power consumption, requiring 1.1V down from DDR4’s 1.2V. 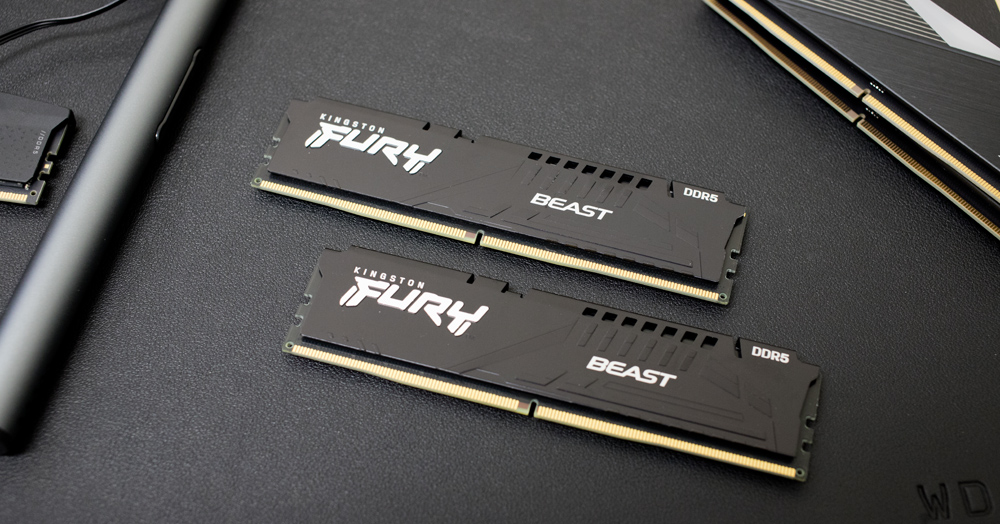 The Kingston Fury Beast DDR5-5200 desktop memory kit under review here is for high-performance applications, including gaming. The 32GB kit we’re reviewing includes two 16GB DIMMs. It goes for $303 on Amazon and was hard to find elsewhere; DDR5 isn’t being produced in huge quantities just yet. Nonetheless, it’s competitively priced with Corsair Vengeance ($343 on Newegg) and XPG Lancer ($327). The price will still come as a shock if you’re used to DDR4 prices; a 32GB DDR4-3200 kit can be had for around $120.

The Fury Beast modules themselves have an aggressive yet not unprofessional look. The 288-pin DIMMs are covered in black anodized aluminum heat spreaders to keep them cool. They feel well-made and are just as easy to install as DDR4 modules. 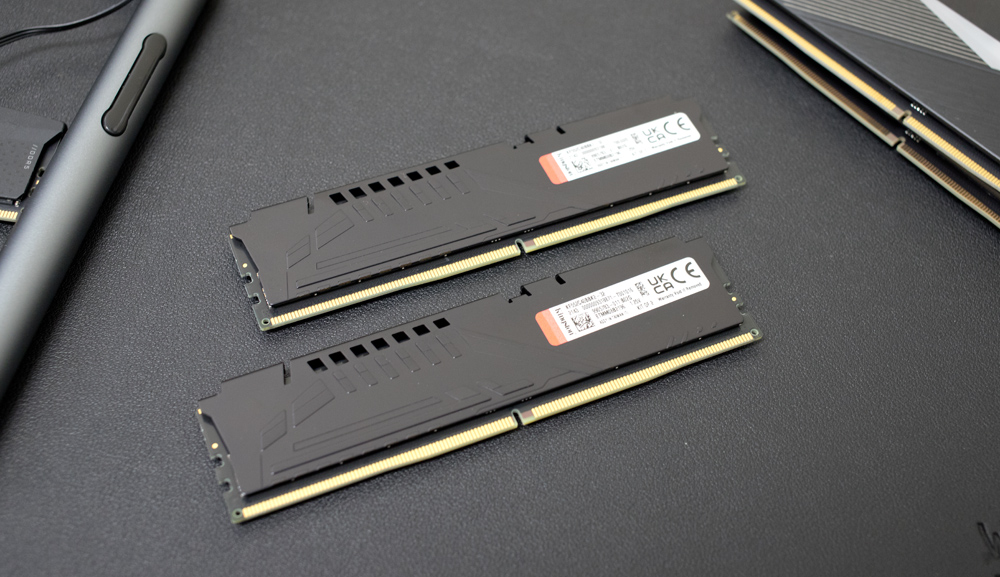 These modules don’t have RGB lighting. Though Kingston offered RGB-infused DDR4 memory, it doesn’t yet offer DDR5 with RGB. This doesn’t really make us sad, but worth noting for those who are into the aesthetic.

The full specifications of the Kingston Fury Beast DDR5 are as follows.

We use our self-built StorageReview desktop to test DDR5 memory; its specifications are as follows:

The Kingston Fury Beast DDR5-5200 kit under review is two 16GB modules (32GB total). For perspective, we benchmarked it at DDR5-4800 and DDR5-5200, with and without the XMP II profile engaged, using the following settings:

The XMP II timings at DDR5-5200 are slightly looser than they are at our motherboard’s default settings. That said, the timings are essentially the same between DDR5-4800 and DDR5-5200, so the effective latency should go down while operating at the higher frequency.

We are comparing the Kingston Fury Beast DDR5-5200 memory to the following kits and settings:

It’s not exactly apples to apples, since we’re using different memory sizes and DIMM configurations. The Team Group T-Force Delta RGB memory shares our Kingston kit’s timings; the XPG Lancer RGB kit runs a little tighter. As for the Corsair Vengeance kit, it refused to boot at its rated DDR5-4400 speed without XMP II, so the base benchmarks for that kit are at a lowly DDR5-4000. Let’s start the testing.

We start with the popular SiSoftware Sandra 2021 suite. Higher numbers are better in all subtests. First, we’ll look at the kits running at DDR5-5200, with and without XMP II profiles engaged. The Corsair kit is excluded from this group since it can’t run at DDR5-5200.

The Kingston Fury Beast memory appears to perform better without XMP II off the bat, something that also happened with the XPG Lancer RGB kit, though we’ll see in the next test, 7-Zip, that that’s not a universal takeaway. Unsurprisingly, the Kingston Fury Beast and the Team Group T-Force Delta RGB kits performed even keel running at DDR5-5200 with XMP II.

Now for the Kingston Fury Beast’s performance running at the standard DDR5-4800 speeds and DDR5-4400 for the Corsair kit.

At DDR5-4800, the Kingston Fury Beast kit enjoys a healthy performance boost and lower effective latency versus the Corsair kit running at DDR5-4400, especially with XMP II engaged. That said, the Kingston kit runs even better at DDR5-5200 in XMP II where it has better memory bandwidth (61.811GB/s versus 58.801GB/s) and still-lower latency (32.9ns versus 34.6ns).

The excellent 7-Zip file archive tool has a handy built-in compression benchmark. We ran 10 passes using a 128MB dictionary size and all 24 CPU threads of our Core i9-12900K; higher numbers are better. As with SiSoftware Sandra, we’ll look at the Kingston Fury Beast DDR5-5200 kit against the other DDR5-5200 kits first.

The differences in Total Ratings are so small (about one percent, at best) that it’s hard to declare a winner. The Kingston Fury Beast kit performs marginally better with XMP II engaged than without, though the opposite is true of the Team Group and XPG kits. That said, XMP II profiles are worth engaging if your memory supports them for stability reasons.

The Kingston Fury Beast kit performed marginally better than the Corsair kit overall, though the compression numbers show a larger difference than the decompression numbers; for instance, the Kingston kit at DDR5-4800 (no XMP) had a resulting rating of 93.468 GIPS, 6% higher than the Corsair’s 87.978 GIPS running at DDR4-4000 (no XMP). This is also true for the Kingston kit when it runs at higher frequencies; with XMP II enabled, its compression rating jumps just over 4% from 93.905 GIPS in DDR5-4800 to 97.934 GIPS in DDR5-5200.

The Kingston Fury Beast DDR5-5200 memory kit easily satisfied performance expectations. Though it wasn’t definitively faster than the DDR5-5200 kits we tested from Team Group and XPG (and we didn’t expect it to be since it’s not a low-latency kit), it does show performance advantages over the DDR5-4800 standard, especially in 7-Zip’s compression benchmark, and that’s enough to justify the DDR5-5200 kit’s increased cost versus the DDR5-4800 kit. 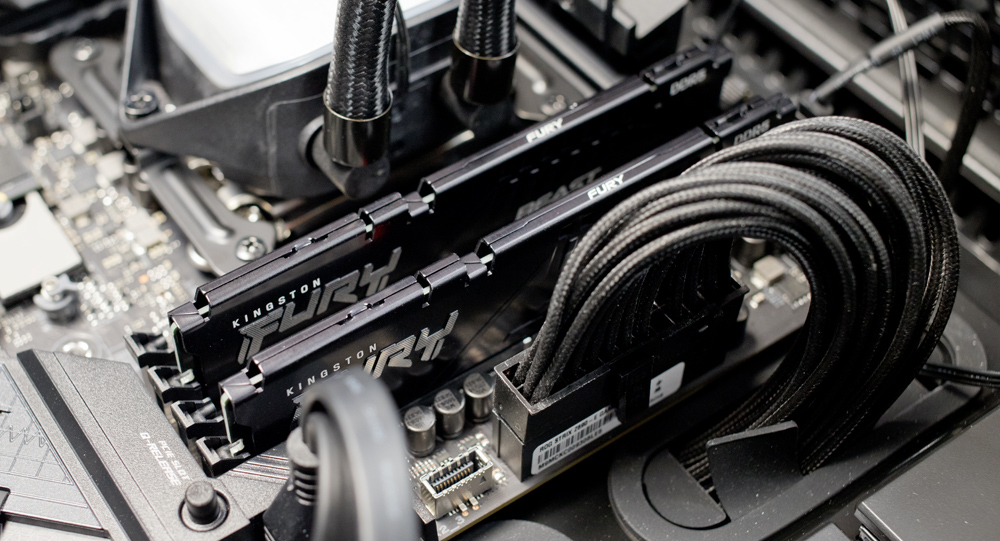 Kingston makes achieving DDR5-5200 easy thanks to its built-in Intel XMP profiles. We also like its aggressive aluminum heat spreaders. Overall, the Kingston Fury Beast DDR5-5200 memory kit gets our recommendation for use in a high-performance PC.