The ThinkPad X1 Extreme Gen 2 is a thin, lightweight mobile workstation that focuses on a balance between power and portability. Featuring 9th Generation Intel Core processor and NVIDIA GeForce GTX graphics, this 15-inch laptop is designed for a range of different use cases including IT and content creators looking for less expensive options compared to the company’s other options like the Lenovo P73.

The ThinkPad X1 Extreme Gen 2 is a thin, lightweight mobile workstation that focuses on a balance between power and portability. Featuring 9th Generation Intel Core processor and NVIDIA GeForce GTX graphics, this 15-inch laptop is designed for a range of different use cases including IT and content creators looking for less expensive options compared to the company’s other options like the Lenovo P73. 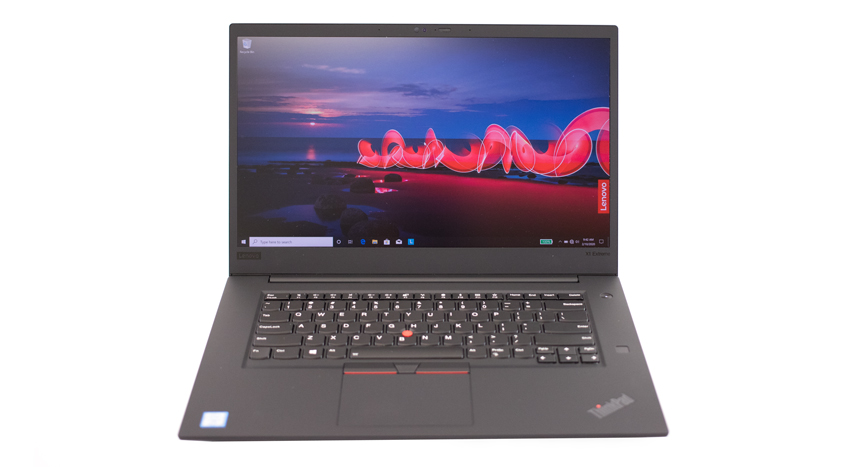 One of the X1’s most important highlights is Lenovo’s claim of a 14-hour battery life, which is very extremely high and thus very attractive to the mobile professional. Moreover, its Rapid Charge technology allows you to get an 80% battery boost in just an hour, which equals to an additional 12 hours of light usage.

At less than an inch thick and weighing at under 4lbs (starting at 3.76lbs), the ThinkPad X1 Extreme is a very portable device. In comparison, Lenovo’s power-drive P73 mobile workstation is over 7 pounds with a 17-inch monitor, which sacrificed portability for power.

The overall build quality of the new Lenovo workstation is quite good. While doing day-to-day work, it didn’t get loud or hot. In addition, the hinge designed is good quality and we don’t see it being damaged easily. It also feels very solid for a super lightweight laptop. 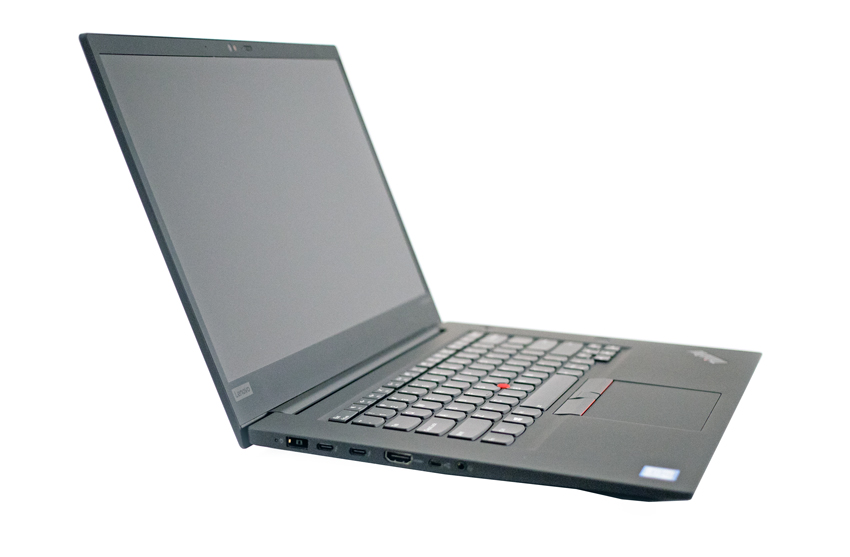 All connectivity resides on the sides of the laptop. On the right are the power input, USB-C Thunderbolt, HDMI 2.0, RJ45 Ethernet dongle and headphone/mic combo ports. On the left is the smart card reader (optional) and SD card reader as well as two USB-A 3.1 Gen ports (one always on) and a Kensington lock slot. 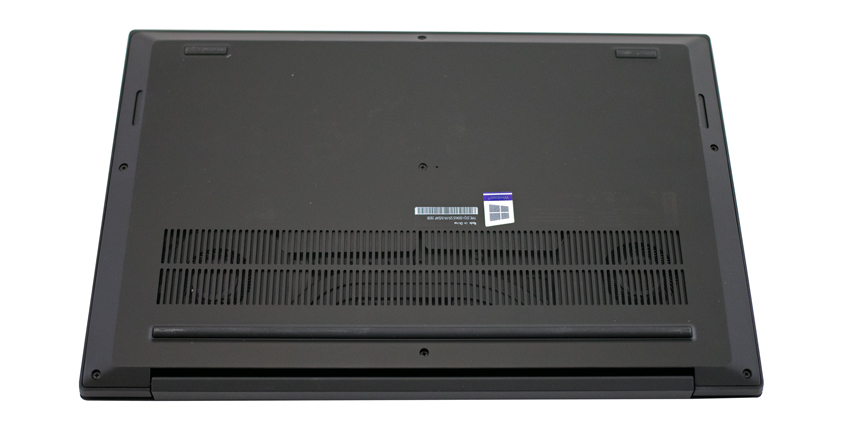 For graphics, we are using the lower-to-mid-range NVIDIA GeForce GTX 1650 Max-Q 4GB (the only option Lenovo offers for this workstation) professional graphics card, which is powered by the NVIDIA Turing architecture and is designed more to handle gaming use cases. It combines point and integer operations, adaptive shading technology, and a new unified memory architecture while featuring twice the cache of its predecessor. 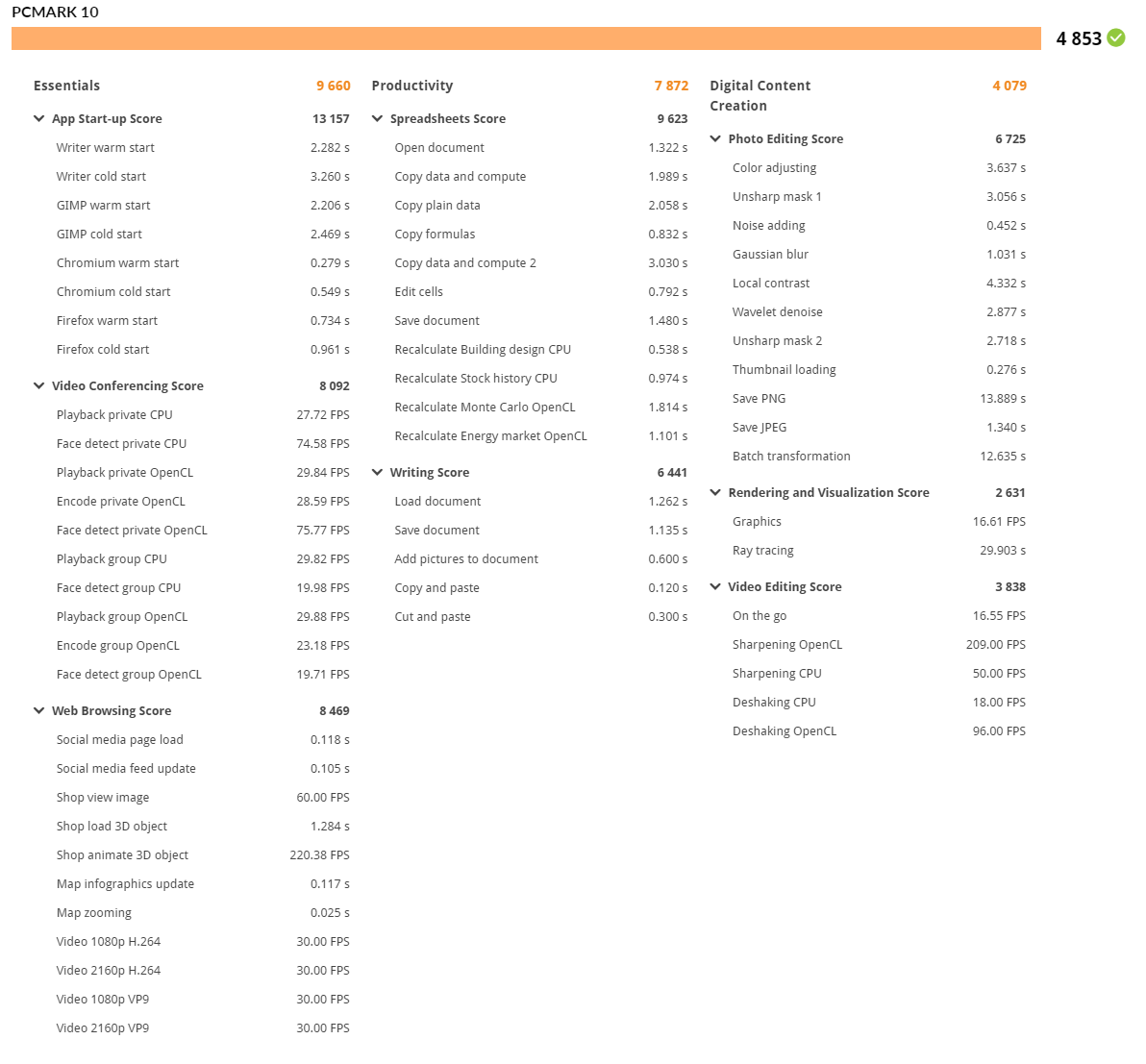 The first test is the PCMark10 benchmark, which is a system benchmark for Windows PCs with a focus on modern office tasks. It offers a variety of workloads categorized into three groups. The Essentials group includes web browsing, video conferencing, and app start-up time. The Productivity group includes tests based on spreadsheets and writing. The Digital Content Creation group includes photo editing, video editing, and a rendering and visualization test.

The Lenovo workstation some pretty good results for its class, including essentials (9,660) and productivity (7,872), digital content (4,073), the latter score being bogged down by the graphics and ray tracing tests. The overall score of 4,853 is right on target.

The next test is the SPECviewperf 13 benchmark, which is the worldwide standard for measuring graphics performance based on professional applications. SPECviewperf runs 9 benchmarks called “viewsets,” which represent graphics content and behavior from actual applications and include categories such as 3D Max, CATIA, Creo, Energy, Maya, Medical, Showcase, Siemens NX, and Solidworks.

The X1 showed some pretty solid results for its class in most of the tested areas. It outperformed the HP ZBook x2 G4 in categories like 3dsmax, maya, showcase, and medical (though it fell well behind in sw and snx).

In the SPECworkstation3 test, the Lenovo X1 showed some pretty solid scores, easily out-performing the ZBook x360 in every category.

Next up is the Environmental Systems Research Institute (Esri) benchmark. Esri is a supplier of Geographic Information System (GIS) software. Esri’s Performance Team designed their PerfTool add-in scripts to automatically launch the ArcGIS Pro. This application uses a “ZoomToBookmarks” function to browse various pre-defined bookmarks and create a log file with all the key data points required to predict the user experience. The script automatically loops the bookmarks three times to account for caching (memory and disk cache). In other words, this benchmark simulates heavy graphical use that one might see through Esri’s ArcGIS Pro software. The tests consist of three main datasets. Two are 3-D city views of Philadelphia, PA and Montreal, QC. These city views contain textured 3-D multipatch buildings draped on a terrain model and draped aerial images. The third dataset is a 2-D map view of the Portland, OR region. This data contains detailed information for roads, landuse parcels, parks and schools, rivers, lakes, and hillshaded terrain.

The new Lenovo ThinkPad X1 Extreme Gen 2 is a lightweight, ultra-portable mobile workstation and an overall solid performer for its class. Though not as customizable as other laptops we’ve seen, users still have a few options to choose from when building their X1, including several CPUs of the 9th Generation Intel Core i5-9000H processor line, up to 64GB of DDR4 2666 MHz RAM, 1TB of NVMe SSD storage, and a beautiful 15.6″ UHD (4K, 3840 x 2160) OLED display. The NVIDIA GeForce GTX 1650 is the only GPU available for the X1; this is a decent mid-range professional graphics card with 4GB of memory. That said, top builds cost just over $3,000, which is very reasonable for those on a workstation budget.

To analyze the overall performance of the Lenovo X1 Extreme during both resource-intensive and casual workloads, we it through a range of different benchmarks. Overall, the new ThinkPad showed strong results for its class. We started with the PCMark10 benchmark, which is a system benchmark for Windows PCs with a focus on modern office tasks. Here, the X1 showed a score of 9,660 in essentials and 7,872 in productivity and 4,073 in digital content. The last score was to a hit in the graphics and ray tracing tests (unsurprisingly), but the overall score of 4,853 is pretty much right where it should be.

We also ran SPECviewperf 13, which specializes in benchmarks designed for testing all key aspects of workstation performance. Specifically, it uses over 30 workloads to test CPU, graphics, I/O, and memory bandwidth. The X1 showed some very solid results again, outperforming the similarly-classed HP ZBook x2 G4 in all categories by a noticeable margin.

For graphics-intensive benchmarks, we ran SPECviewperf 13, the worldwide standard for measuring graphics performance based on professional applications, and the Esri benchmark. In SPECviewperf the X1 pretty good results with 3dsmax (74.71), Creo (70.63), Energy (5.9), Maya (89.88), Medical (24.84), and Showcase (37.85); though it lacked in CATIA (57.25), Siemens NX (21.03), and Solidworks (53.85) categories. The Esri benchmark performance ends our performance testing on a high note. The X1 showed decent results in the Philly and Montreal test, hovering around the 145 and 60 mark for average and minimum FPS, respectively, while Portland hit 315 FPS (average) and 57 FPS (minimum).

Though it certainly doesn’t boast the raw power of Lenovo’s recent P73, the Lenovo ThinkPad X1 Extreme Gen 2 is a great option for professionals looking for an affordable solution that can effectively handle most heavy workloads. This is also an extremely portable device (around 4 pounds) compared to others in its class, which is something that many users will put ahead of top-class performance.