The Lenovo ThinkStation P360 Ultra is a workstation mini-PC. Despite its size, it supports 125-watt Intel processors, 128GB of DDR5 RAM, and two PCIe Gen4 SSDs. Graphics come from Nvidia’s RTX A-class mobile cards. For its size, it’s hard to beat the power in this little workstation.

The Lenovo ThinkStation P360 Ultra is a workstation mini-PC. Despite its size, it supports 125-watt Intel processors, 128GB of DDR5 RAM, and two PCIe Gen4 SSDs. Graphics come from Nvidia’s RTX A-class mobile cards. For its size, it’s hard to beat the power in this little workstation.

The ThinkStation P360 Ultra is aimed at space-conscious professionals who don’t need the power or expansion of a mid- or full-size tower. It’s based around Intel’s “Alder Lake” Core series processors and uses the workstation-class W680 chipset. Core i3 through Core i9 processors are available.

Dedicated graphics options start with the Nvidia RTX A2000 and scale to the RTX A5000. Note this is the mobile (laptop) graphics and thus won’t have the performance of the number-equivalent desktop card, but that’s understandable given the P360 Ultra’s dimensions. The standard graphics card is the Intel UHD 770 Graphics silicon built into the processor, but to support the P360 Ultra’s maximum of eight monitors, you’ll need dedicated graphics.

Intriguingly, the P360 has four instead of the expected two SODIMM slots and supports up to 128GB of DDR5 RAM (four 32GB modules). Both non-ECC and ECC options are available. You also get two M.2 2280 PCIe Gen 4 slots and a 2.5-inch bay.

The full specifications of the ThinkStation P360 Ultra are as follows:

The ThinkStation P360 Ultra is one tiny PC. Its 3.4 x 8.7 x 7.9-inch case (WDH) comes out to just 3.9 liters or a tenth of the volume of a typical mid-tower. It fits just about anywhere. Its starting weight is 3.96 pounds but it can weigh almost eight pounds fully configured. 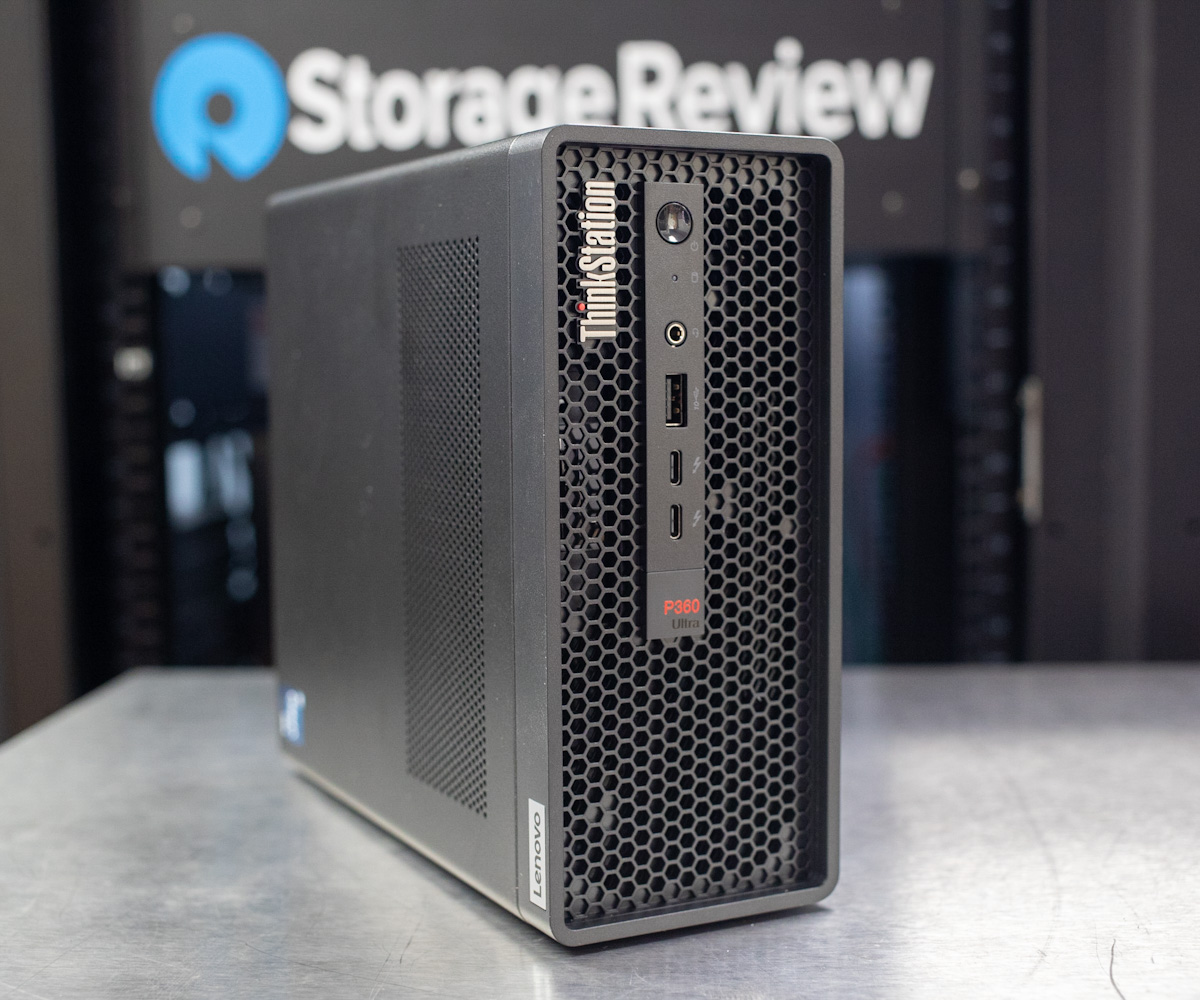 The P360 Ultra is well built; Lenovo puts it through 12 military-grade tests. The case is nearly all metal. The front airflow grate is plastic. Front-panel connectivity includes one USB 3.2 Gen 2 Type-A port, two Thunderbolt 4 ports, and an audio combo jack. 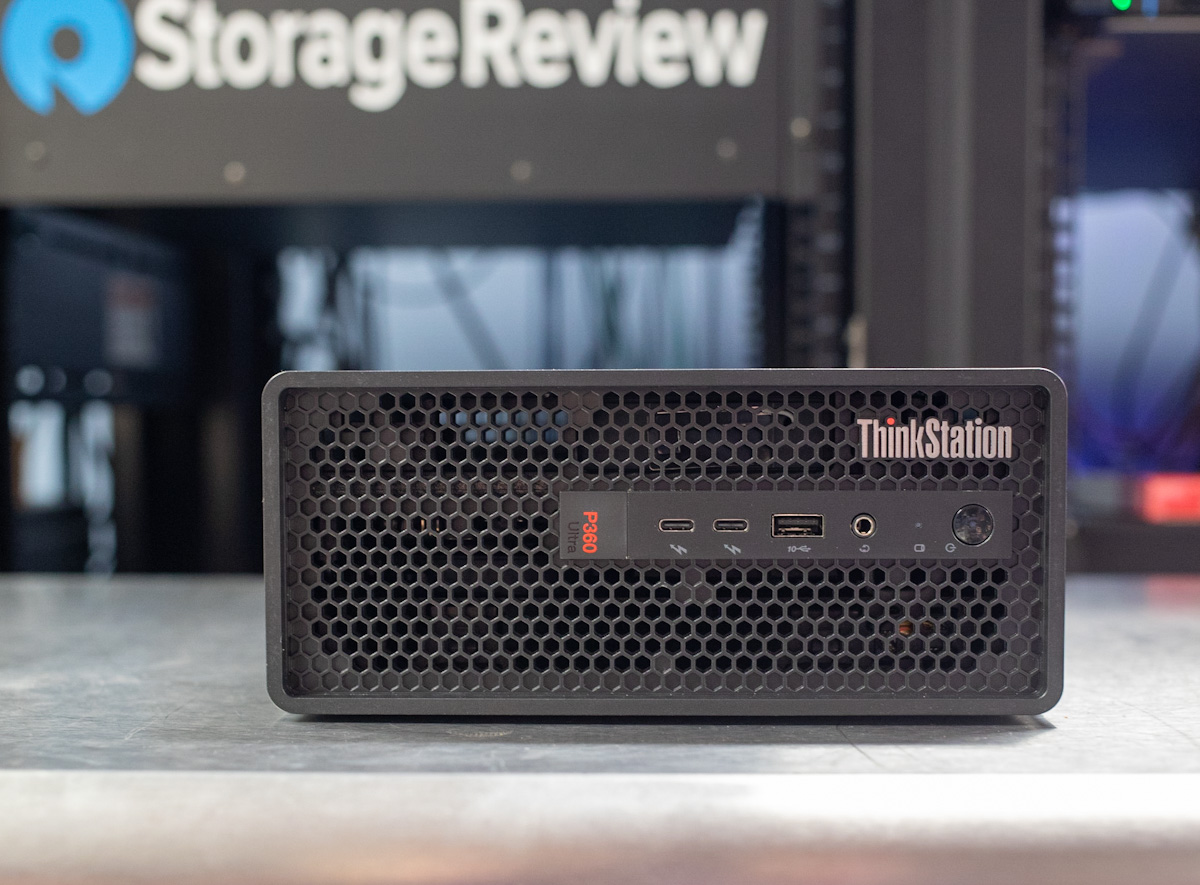 The P360 Ultra uses an external laptop-style power adapter, which isn’t uncommon for a mini-PC. You’ll also find a Kensington-style lock slot on the back, an important feature on a mini-PC that’s going to be used in public or semi-public places.

The top of the case slides off for interior access. This underside view shows the cooling solution for the Nvidia RTX A5000 graphics card and two of the SODIMM slots.

The other half of the chassis shows more cooling; notice the shrouds over the heatsinks. Fan noise was minimal during normal use, although expect to hear things ratchet up if you push the CPU and GPU to their limits. The other two SODIMM slots are accessible here. 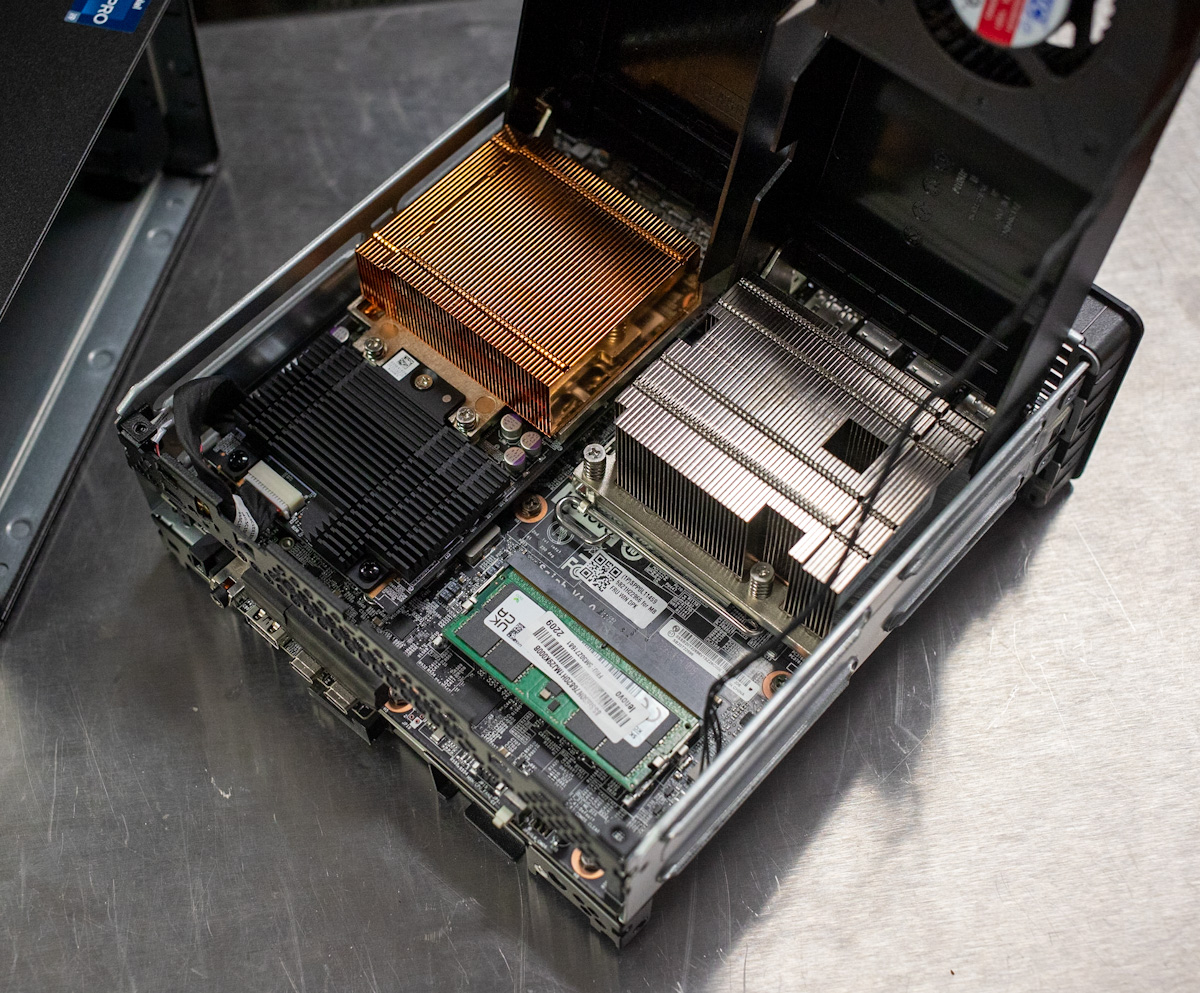 Our ThinkStation P360 Ultra review unit has the following specifications:

The base model starts at $1,699 but this one is over $4,000. The most expensive upgrades are the Core i9 processor and the Nvidia RTX A5000 graphics. The P360 Ultra is also available with Intel K-class CPUs (125 watts base power), but those limit your graphics card selection since those CPUs require extra cooling.

Our first test is SPECworkstation3, which specializes in benchmarks designed for testing all key aspects of workstation performance. It uses over 30 workloads to test CPU, graphics, I/O, and memory bandwidth. The workloads fall into broader categories such as Media and Entertainment, Financial Services, Product Development, Energy, Life Sciences, and General Operations. We are going to list the broad-category results for each, as opposed to the individual workloads. The results are an average of all the individual workloads in each category.

Our next test is SPECviewperf 2020, the worldwide standard for measuring graphics performance of professional applications under the OpenGL and Direct X application programming interfaces. The viewsets (or benchmarks) represent graphics content and behavior from actual applications, without having to install the applications themselves. The newest version of this benchmark went through major updates late last year, including new viewsets taken from traces of the latest versions of 3ds Max, Catia, Maya, and Solidworks applications. In addition, they added support within all viewsets for both 2K and 4K resolution displays.

The P360 Ultra continues showing strong performance, trading places with the NUC 12 Extreme. The Z2 Mini G9’s RTX A2000 is a much weaker GPU, and its numbers reflect that.

The scores usually aren’t radically different between the P360 Ultra and the NUC 12 Extreme, which makes sense since they use the same Core i9-12900 processor. The Z2 Mini G9’s Core i9-12900K shows its strength.

Next up is Blender, an open-source 3D modeling application. This benchmark was run using the Blender Benchmark utility. NVIDIA OptiX was the chosen render method. The score is in samples per minute, with higher being better.

The story is similar to what we saw in SPECviewperf, the P360 Ultra and the NUC 12 Extreme scoring closely.

Now we’ll try LuxMark, an OpenCL GPU benchmarking utility. The P360 Ultra actually edges out the NUC 12 Extreme kit in both tests. We don’t have results for the Z2 Mini G9.

OctaneBench is a benchmarking utility for OctaneRender, which is a 3D renderer with RTX support that is similar to V-Ray. Like Luxmark, OctaneBench is large GPU-dependent.

It’s becoming clear that the P360 Ultra’s RTX A5000 mobile card is a bit stronger than the NUC 12 Extreme’s desktop RTX A4000, which is remarkable.

We also run the popular SiSoftware Sandra 2021 suite. Higher numbers are better in all subtests.

The P360 Ultra is well behind the NUC 12 Extreme here. (We don’t have numbers for the Z2 Mini G9.) The unit Lenovo sent us unfortunately uses single-channel memory, which is probably what hampers its performance in this test. 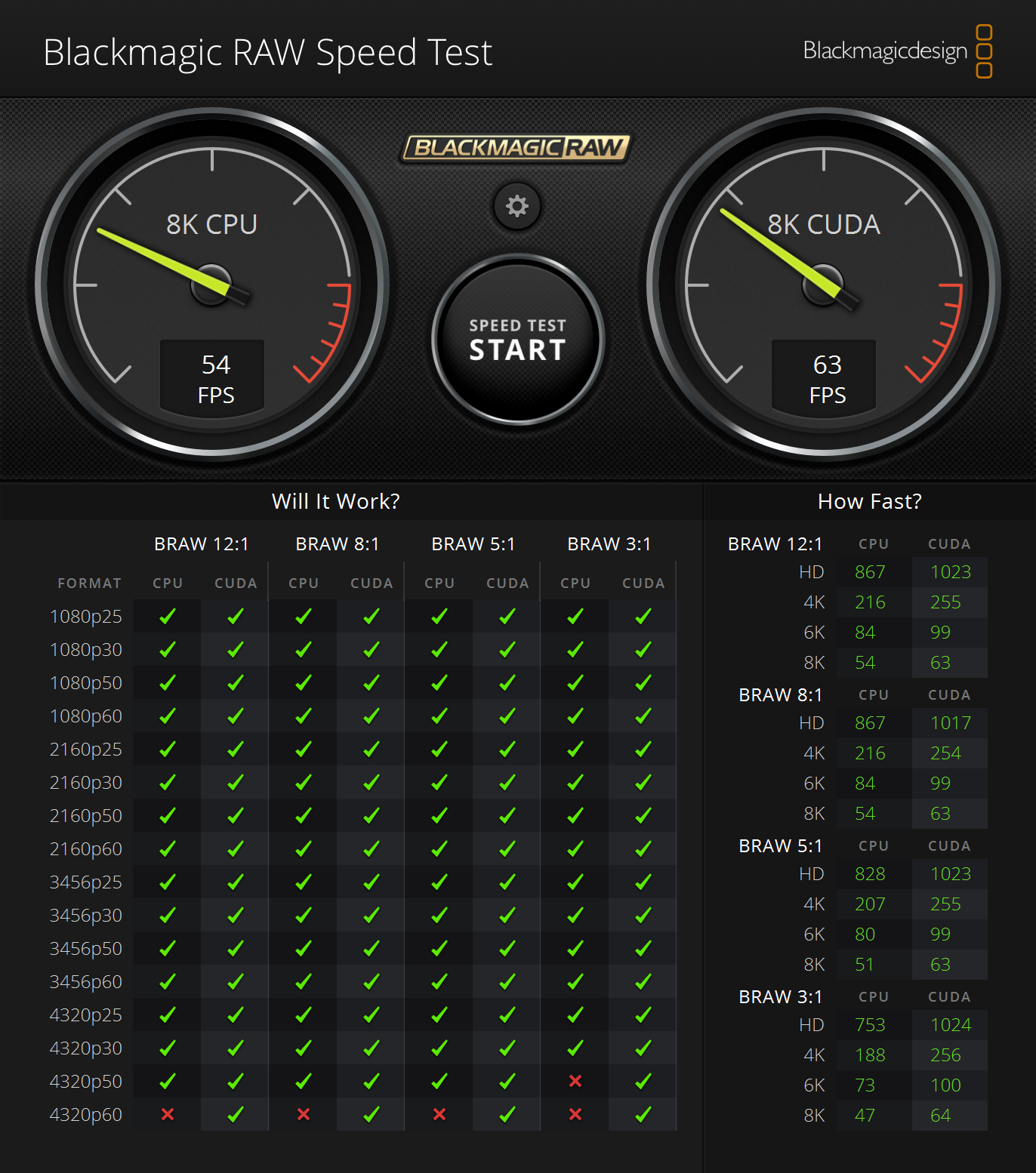 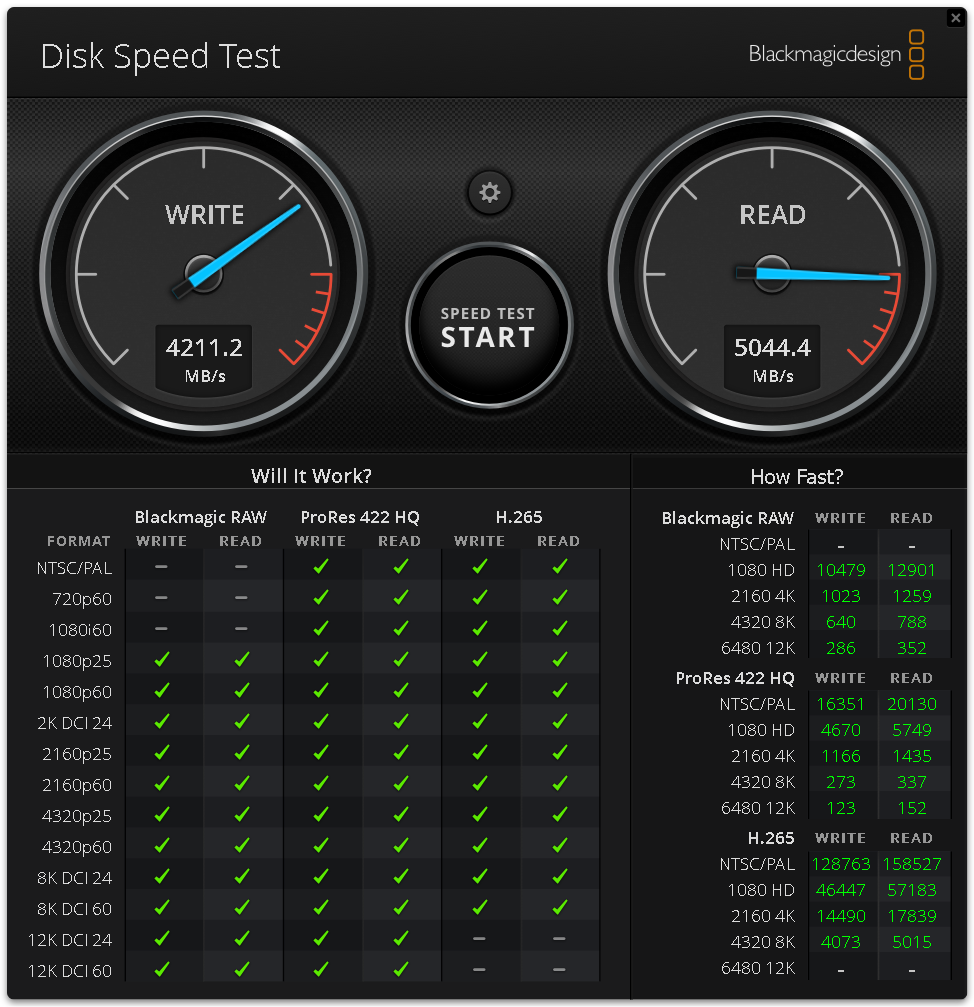 The ThinkStation P360 Ultra performs extremely well for a mini-PC workstation. Our test unit, equipped with a Core i9-12900 and an Nvidia RTX A5000 mobile GPU, performed similarly to an Intel NUC 12 Extreme with the same CPU but an RTX A4000 desktop card, and that’s impressive.

This mini-PC’s main limitation as a workstation is expansion, but that’s a given for a PC that’s a tenth of the size of a typical mid-tower. Lenovo still managed to fit four SODIMM slots supporting 128GB of RAM, two M.2 PCIe Gen4 slots, and a 2.5-inch bay for storage. There are also two Thunderbolt 4 ports for fast external connections.

The P360 Ultra’s main competition is the HP Z2 Mini G9. The P360 Ultra generally outperformed it in our GPU-sensitive testing because of its stronger (albeit mobile) graphics card, though HP’s Intel K-class CPU gave it the edge in our CPU benchmarks. The P360 Ultra can also be had with K-class chips, though you won’t be able to get the top GPU options.

The P360 Ultra’s pricing seems steep (over $4,000 as tested) but that’s the price of going so small with so much capability. The only other major downside we see with this little PC is GPU upgradeability; it’s not like a traditional desktop where you can simply switch out the card for the latest model. But if that limitation doesn’t bother you and you don’t need (or want) the expansion of a full-size tower, the ThinkStation P360 Ultra is a sensible workstation pick. It gets our recommendation.