We have reviewed many different Next Unit of Computing (NUC) systems over the years. These range from a low-powered NUC 7 system that we currently use as a VDI client to a powerful NUC 9 Pro that we use as an ESXi server. We even had a chance to review a Simply NUC Ruby R8 which comes with an AMD processor.

We have reviewed many different Next Unit of Computing (NUC) systems over the years. These range from a low-powered NUC 7 system that we currently use as a VDI client to a powerful NUC 9 Pro that we use as an ESXi server. We even had a chance to review a Simply NUC Ruby R8 which comes with an AMD processor.

We were excited when we got the latest NUC from Intel – a NUC 12 Extreme, code-named Dragon Canyon. This system is positioned heavily toward gamers, although it has many other uses with its high-performance components. We feel others may use them for graphic workstations and content creation. 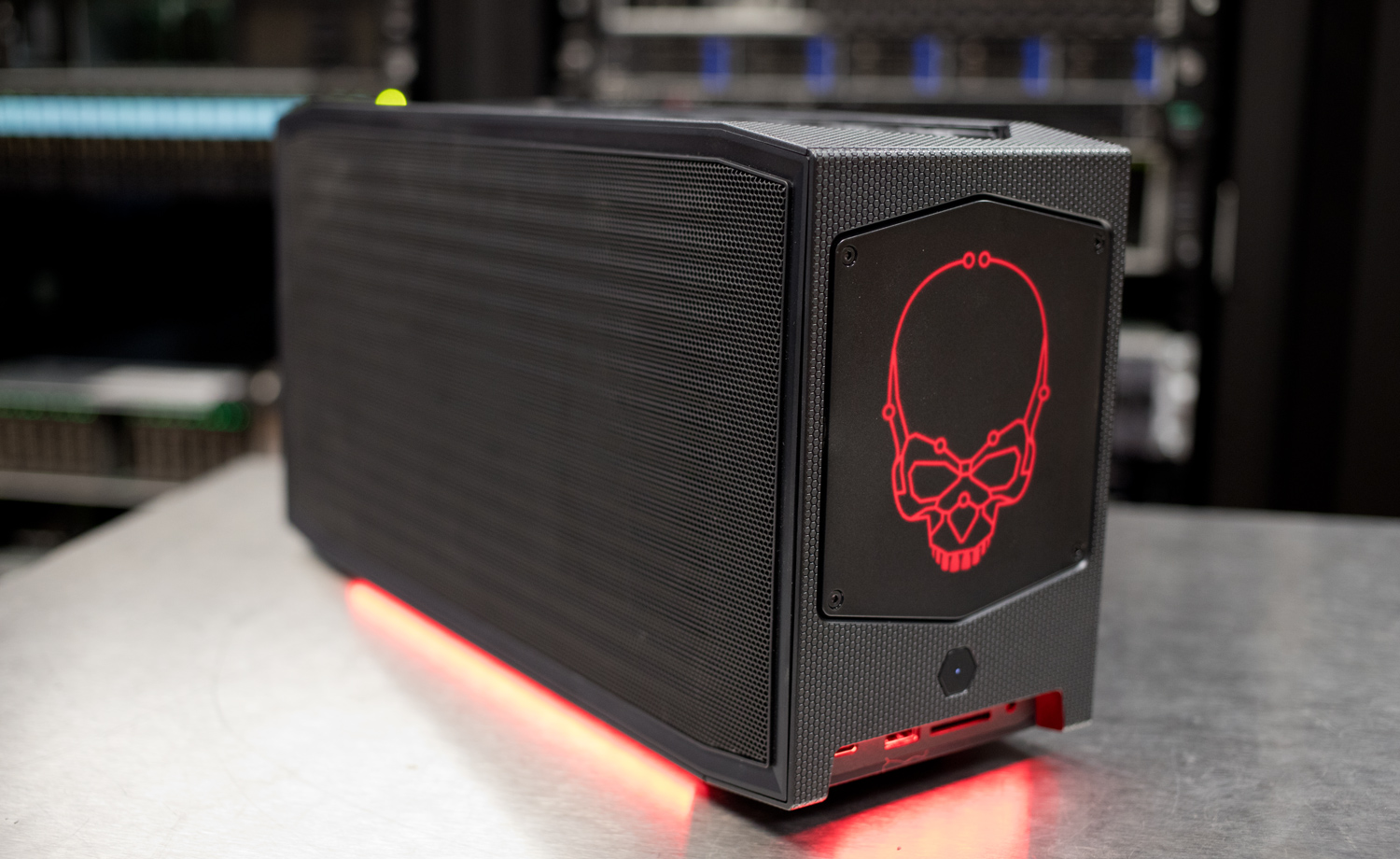 The version summary page shows that the NUC 12 comes in an Extreme version and a Pro X version with either a Core-i9 or a Core-i7 processor. NUC 12 systems ship without memory, storage, or a discrete GPU.

The system that we received was an Intel NUC 12 Extreme (NUC12DCMi9) which is powered by an Intel Core i9-12900 desktop processor.

The NUC came in a large (14” x 11” x 7”) heavy cardboard box, with the device itself being nested between two black foam blocks and wrapped in an electrostatic plastic bag. The box also contains a region-specific power cord, an M.2 offset screw, and quick start, regulatory, and safety guides. An unboxing video can be seen on our social media – Instagram or TikTok. 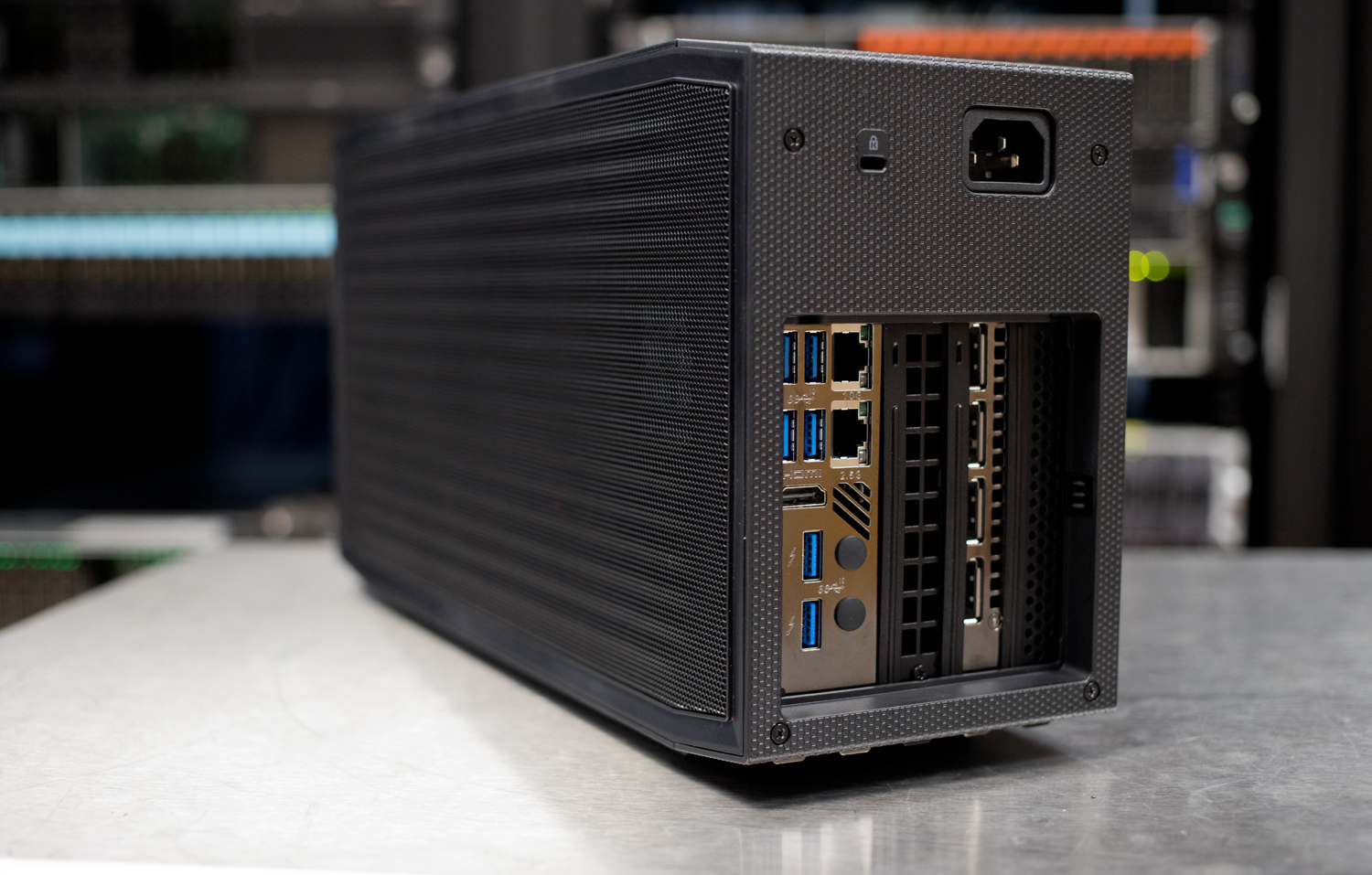 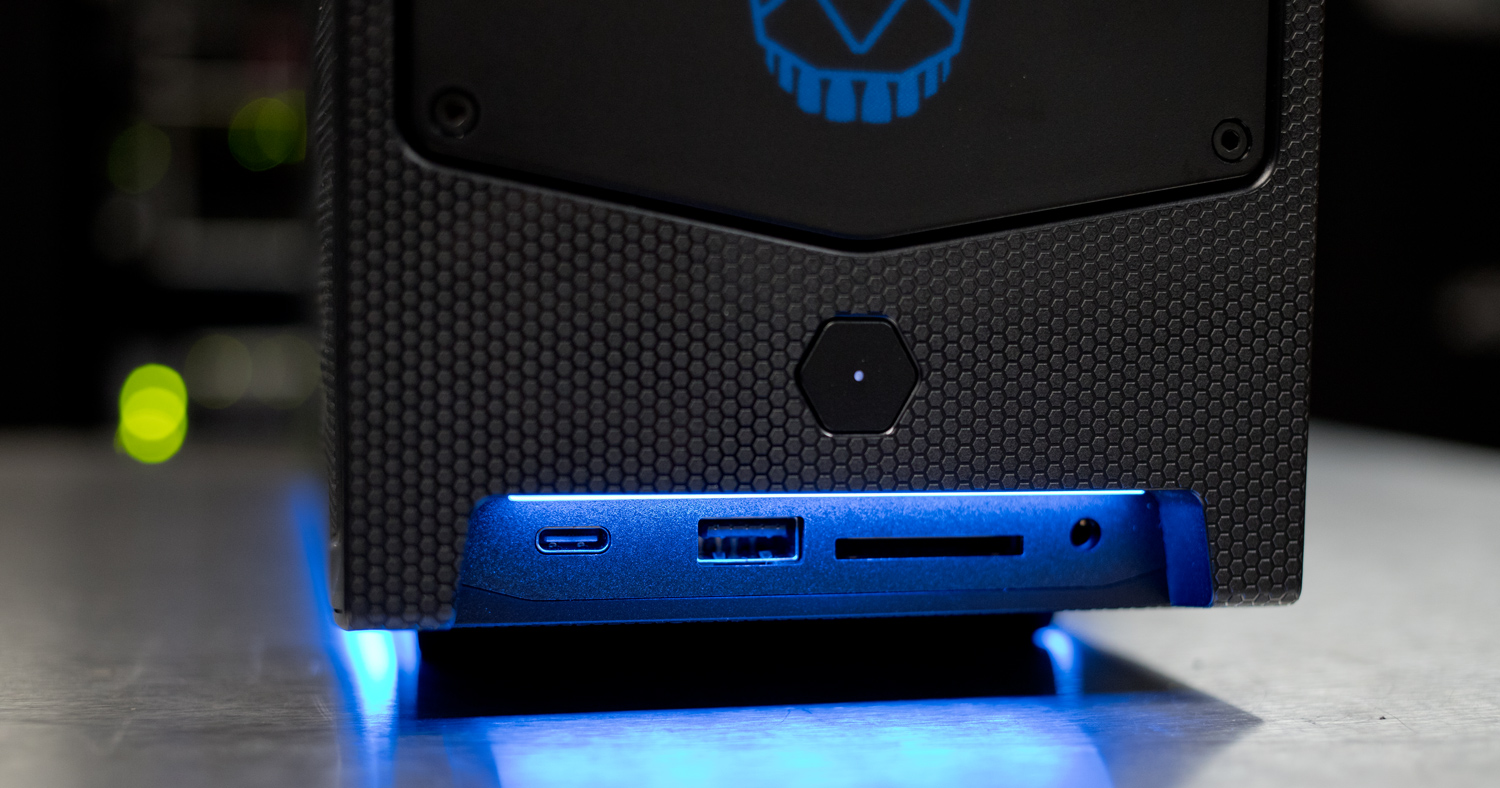 The top and bottom of the device’s case are made of strong plastic with ventilation slots. The two sides are made of corrugated metal with perforated holes. Overall, the case is attractive and very durable; it should hold up well in a home, office, or data center. 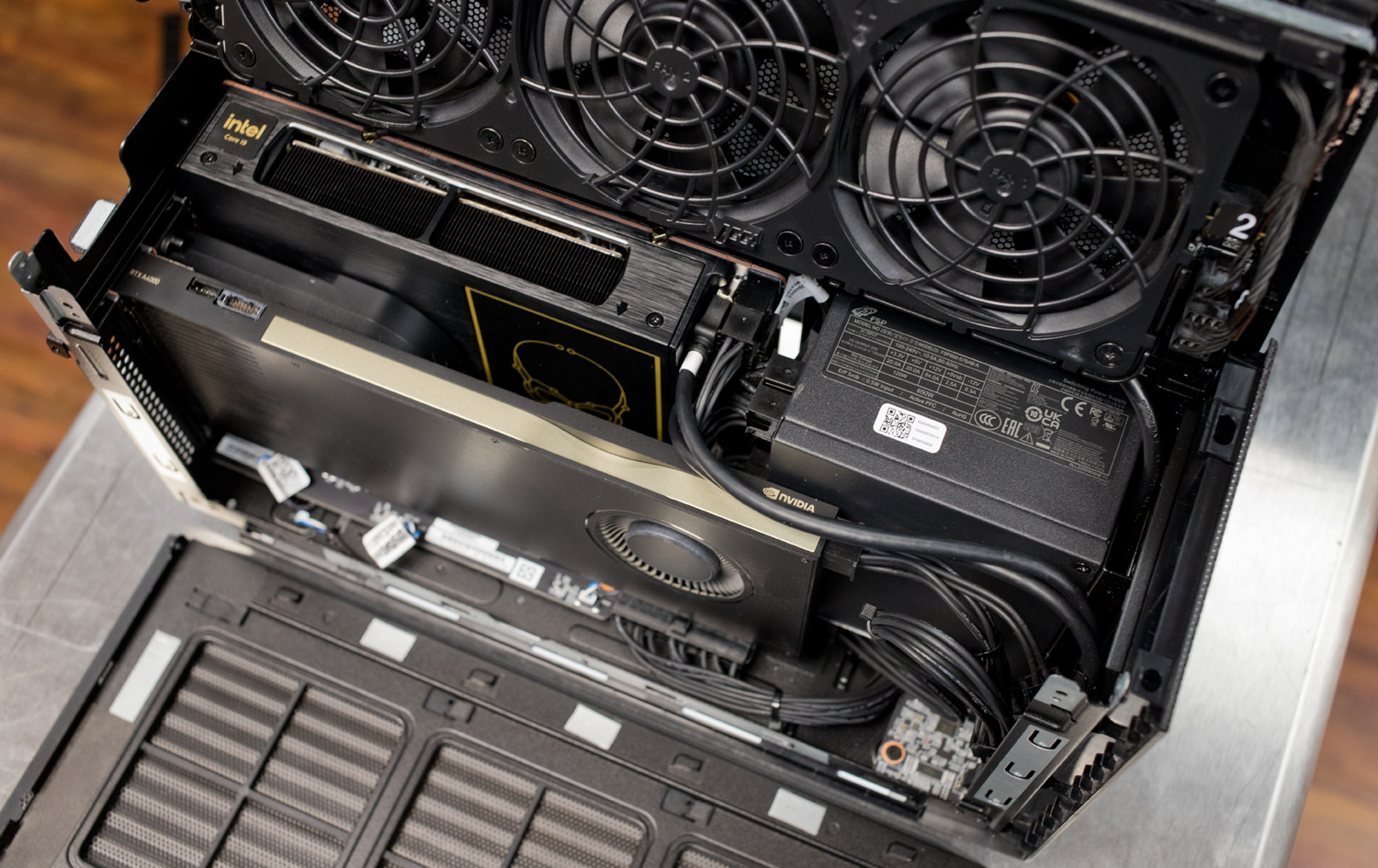 If you look at the feature summary for this device you will see the board form factor is PCIe as it uses a Compute Element rather than a discrete socket mounted or soldered-on CPU. The other side of the case shows a well-constructed board that the components are plugged into. 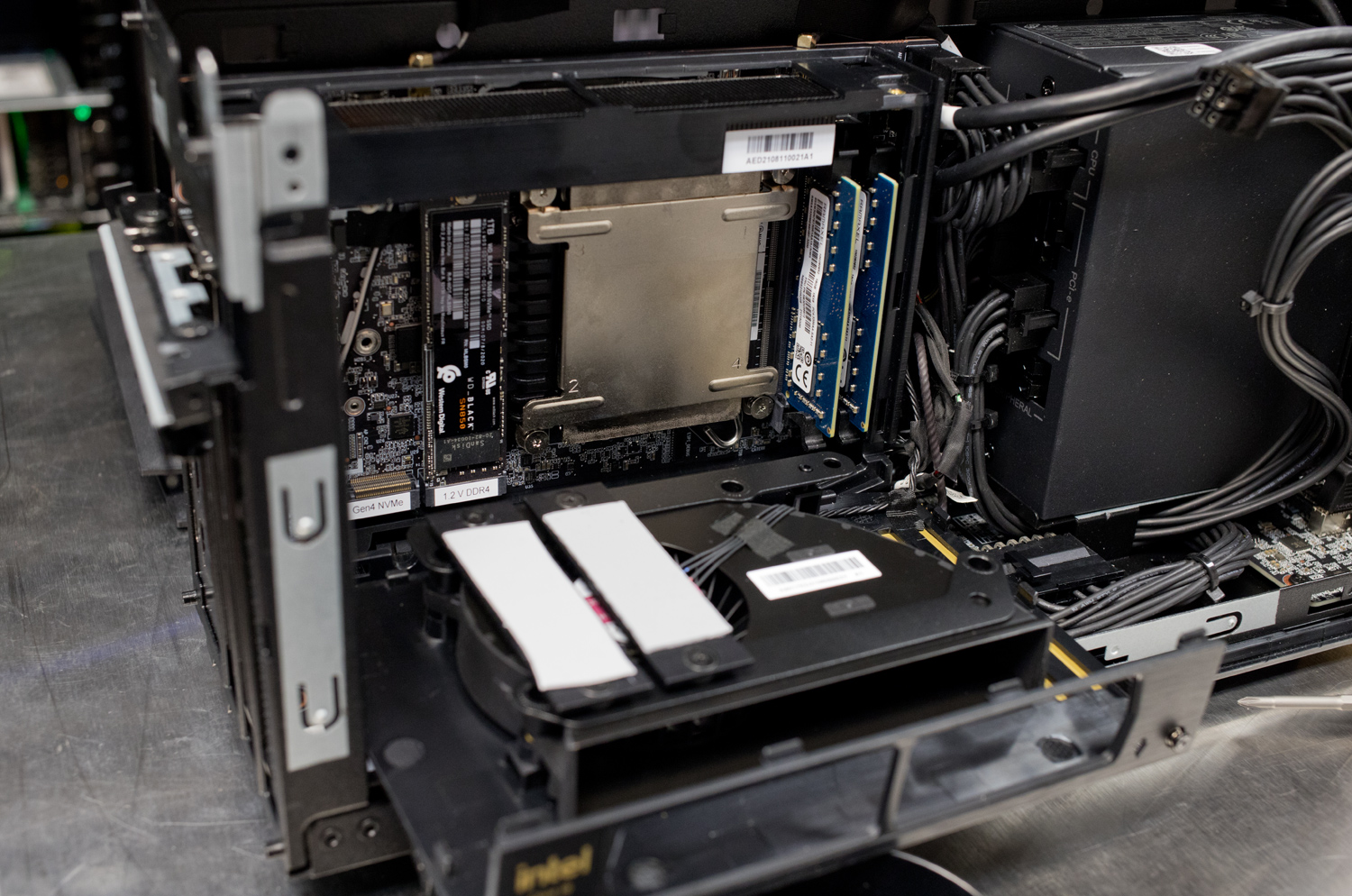 As the computer did not come with memory or storage we placed two 16GB 3200 DDR4 SODIMMs in it and a 1TB WD SN850 SSD in the NVMe M.2 slot on the Compute Element. It’s important to note that the RAM inside the Dragon Canyon has a big performance trade-off that comes with its physical footprint. On a desktop that leverages the same Intel Core i9-12900K processor, you’d have access to faster DDR5 memory, as well as faster DDR4 RAM kits. Currently, the Dragon Canyon NUC tops out at supporting 3200Mhz DRAM, while desktops can easily reach 5200Mhz on DDR5 kits. This subtle difference greatly impacts some benchmarks, which we focus on later on in this review.

To add the RAM, storage and GPU we needed to remove the back and side of the case and flip up the top cover. This process must be done in a specific order and is detailed in the user guide. 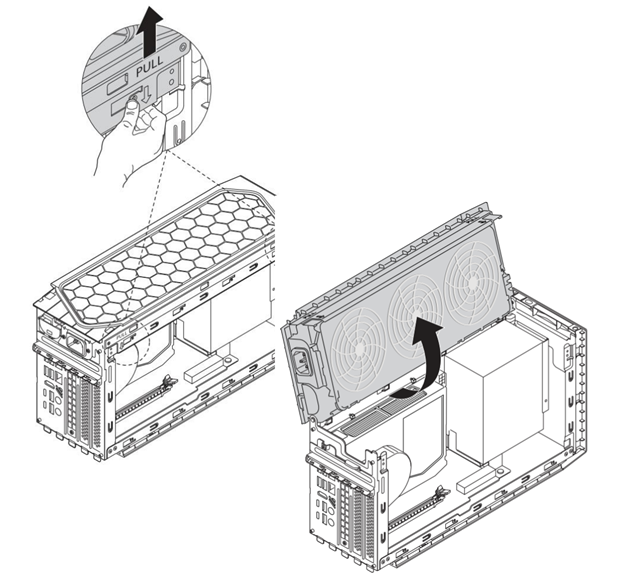 The device is tightly packed, and it took some effort and time to add the storage, RAM, and GPU into it. The M.2 NVMe slots and RAM slots are located directly on the Compute Element. 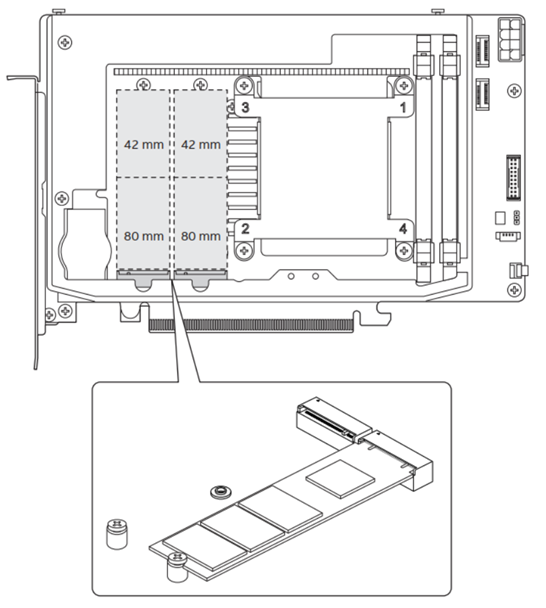 The block diagram of the device shows its connectivity and expandability. It should be noted that all six of the rear USB 3.2 devices go through the same USB connection to the chipset and the 10GbE NIC has a PCIe x4 connection. 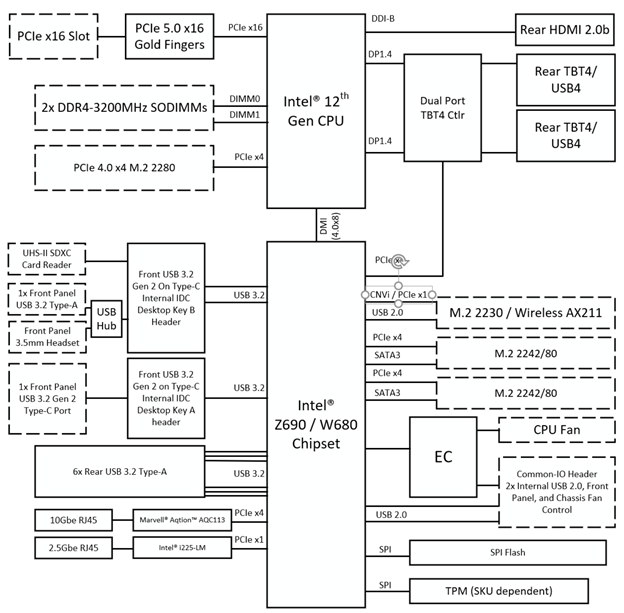 The heart of the system is a NUC 12 Extreme Compute Element (NUC12EDBi9). The Compute Element is basically a PCI Express card that contains a CPU and the major motherboard components; it allows the system to have a smaller footprint and easier upgradability.

The Compute Element in our device has a single Intel Core i9-12900 (Alder Lake) processor. This CPU is a 64-bit 16-core, 24 thread desktop-class x86 microprocessor. It has eight performance cores and eight efficient cores. Only the performance cores support hyperthreading. This is unique and you can read more about this architecture here. The CPU has 30 MB of Intel Smart Cache and 14 MB of L2 cache. It is rated with a Thermal Design Power (TDP) of 65W and 241W when in Turbo mode.

The CPU has an integrated Intel UHD Graphics 770 processor which operates at 300 MHz with a burst frequency of 1.55 GHz. The 770 has 32 Execution Units (EUs) and supports up to four displays. The TDP and RAM are shared between the CPU and GPU.

For the initial boot and testing of the device, we connected it to a Lenovo 4K monitor via DisplayPort. We installed Windows 11 Pro onto the system for all of our testing.

To evaluate the device’s performance, we ran various benchmarking tests on it and compared them to the Intel-based NUC 10, NUC 11 CE, NUC 11 Pro, NUC 9 Pro, and the AMD-based Simple NUC Ruby 8. We also compared it to our own consumer test rig, leveraging the same Intel i9-12900K CPU in a larger desktop form-factor. While these systems each have their own specific advantages in regards to footprint or performance capabilities, we wanted to show the full picture of how these would compare.

SPECworkstation 3 is a specialized test designed for benchmarking the key aspects of workstation performance by using over 30 workloads to test CPU, graphics, I/O, and memory bandwidth. The workloads fall into seven broad categories: Media and Entertainment, Product Development, Life Sciences, Energy, Financial Services, General Operations, and GPU Compute. We listed the broad-category results which represent an average for all the individual workloads in each category.

The results from our tests indicate that the NUC 12 with its 16-core processor and discrete GPU had significantly higher performance than that of its nearest competitor the NUC 9 Pro. This was not surprising due to its fast, high core count CPU and powerful discrete GPU.

SPECviewperf is considered to be the worldwide standard for measuring graphics performance based on professional applications. SPECviewperf runs 9 benchmarks called viewsets, which represent graphics content and behavior from actual applications, and include applications including 3D Max, CATIA, Creo, Energy, Maya, Medical, Showcase, Siemens NX, and Solidworks.

Below is a comparison of the key hardware components of the NUC systems in these benchmarks.

Comparison of RAM in i9 systems

The comparison of NUC systems was interesting but what is more enlightening is the comparison of the NUC 12 with its DDR4 memory to a system that we recently tested with DDR5 memory, Both of these systems are powered by Intel’s 12th generation i9 Core processors (Alder Lake). Both of these systems have discrete GPUs, but the NUC 12 is limited to DDR4 RAM with a maximum speed of 3200MT/s, while the other system supports DDR5 RAM with a speed of 5200MT/s. In the benchmarks below we focused on processes and tests that stressed the RAM. More information on the StorageReview i9 Test Rig that we used in these tests can be found here.

The SiSoftware Sandra 2021 suite is a system analyzer, diagnostic and reporting tool. Higher numbers are better in all subtests.

The 7-Zip file archive tool has a built-in compression benchmark. We ran 10 passes using a 128MB dictionary size and all 24 CPU threads of our systems. Higher numbers are better.

The Environmental Systems Research Institute (Esri) Performance Team designed their PerfTool add-in scripts to automatically launch the ArcGIS Pro. This application uses a “ZoomToBookmarks” function to browse various predefined bookmarks and create a log file with all the key data points required to predict the user experience. The script automatically loops the bookmarks three times to account for caching (memory and disk cache). In other words, this benchmark simulates heavy graphical use that one might see through Esri’s ArcGIS Pro software.

Blender is an open-source 3D modeling application. This benchmark was run using the Blender Benchmark utility. The score is samples per minute. Higher numbers are better.

LuxMark is an OpenCL GPU benchmarking utility. This is a test where the CPU isn’t a major factor, the load mostly falling on the GPU. Thus, our rig’s and the ThinkStation P620’s numbers are similar. Higher numbers are better.

OctaneBench is a benchmarking utility for OctaneRender, which is a 3D renderer with RTX support that is similar to V-Ray. Like Luxmark, OctaneBench is large GPU-dependent, so the differences are slight between our rig and the workstation. The similarity bodes well for the Core i9 systems; if your workload is GPU-dependent, spending all-out for a heavily threaded workstation CPU isn’t necessarily required. Higher scores are better.

Comparing the StorageReview i9 Test Rig to the NUC 9 we found that in testing that stressed the RAM that the Test Rig with its DDR5 memory outperformed the NUC 12 with its DDR4 memory. This was not surprising due to the speed difference between the types and sizes of memory. The full desktop can leverage DIMMs while the NUC is limited to smaller SO-DIMM modules. However, DDR5 is a leading-edge component, is hard to come by, comes with a hefty price premium and very few systems support it. We also found that the Test Rig with its RTX 6000 GPU outperformed the NUC 12 with its A4000 GPU in graphics-intensive workloads which did not surprise us as the 6000 is a higher performance GPU. 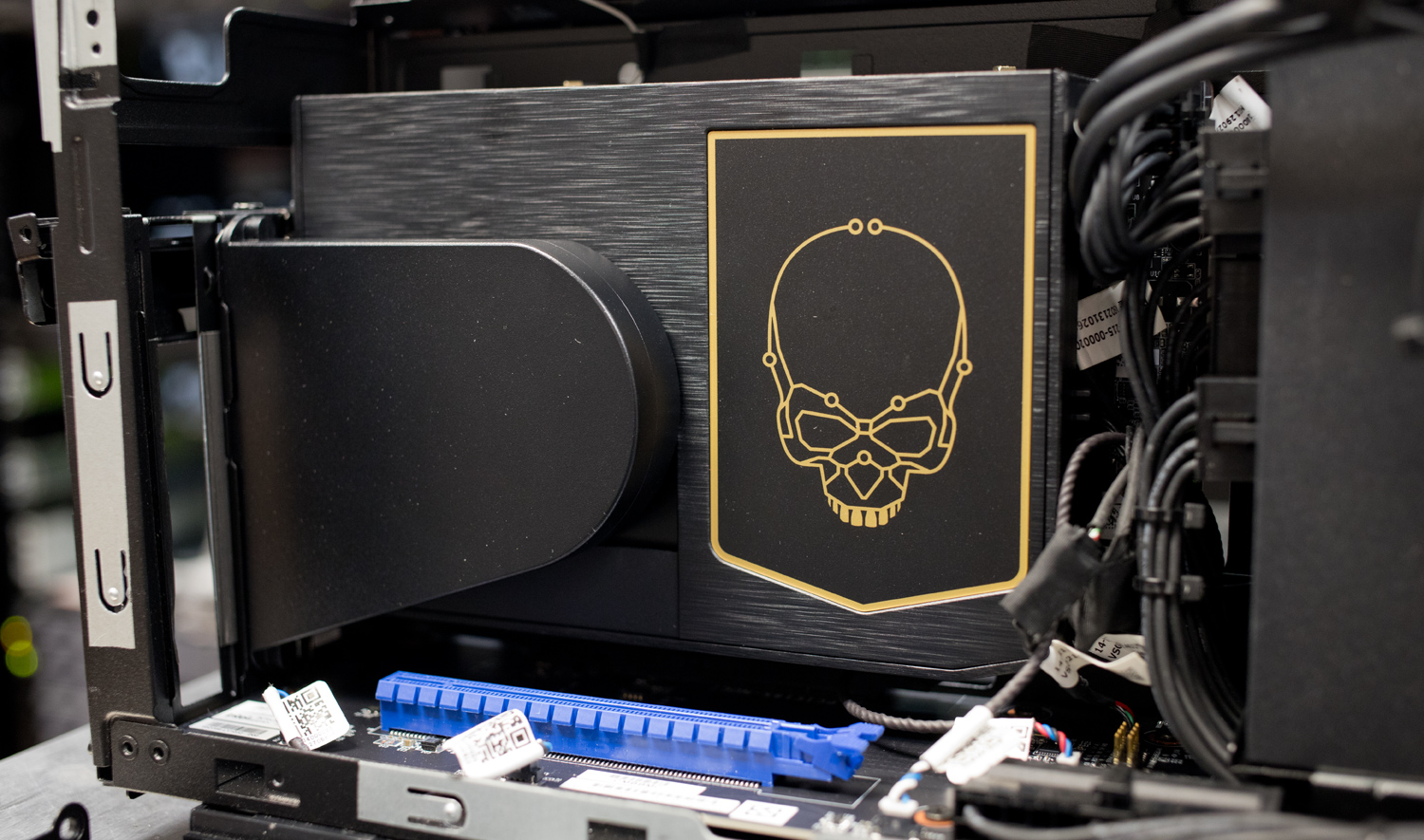 For the homelabber’s we were able to run ESXi on the NUC 9 Pro but ESXi is not supported on this system as the Alder Lake CPU with its hybrid CPU architecture is not recognized by ESXi and the 10GbE NIC does not have an ESXi driver.

The Intel NUC 12 Extreme was designed for gamers, and this shows with its space for a discrete GPU, multiple ports, 10GbE and 2.5GbE wired networking, and a powerful desktop processor, which is a first for an Intel NUC. Intel is wise in selling the NUC 12 in a kit format as gamers will want to outfit it with their preferred GPU, storage, and RAM. However, it does have some limitations such as only support for DDR4 rather than DDR5 RAM, a locked CPU and limited space and expandability for more than two sticks of RAM, and limited storage.

We do feel though, and our benchmarking proved out, this would also make a good system for content creators, CAD/CAM engineers, and others that are looking for a powerful workstation with lots of ports for connectivity that takes up a minimal amount of space.

More information on the NUC 12 Extreme is located here.

A listing of our other reviews on NUC systems can be found here.