Lenovo added another workstation to its ThinkStation family with the introduction of the Lenovo ThinkStation P620 last year. This isn’t just another new weapon in the arsenal of workstations the company rolls out, the P620 was the first professional workstation powered by AMD’s brand-new Ryzen Threadripper PRO processor. This AMD CPU brings 64 cores to single-socket workstations for new performance and flexibility.

Lenovo added another workstation to its ThinkStation family with the introduction of the Lenovo ThinkStation P620 last year. This isn’t just another new weapon in the arsenal of workstations the company rolls out, the P620 was the first professional workstation powered by AMD’s brand-new Ryzen Threadripper PRO processor. This AMD CPU brings 64 cores to single-socket workstations for new performance and flexibility. 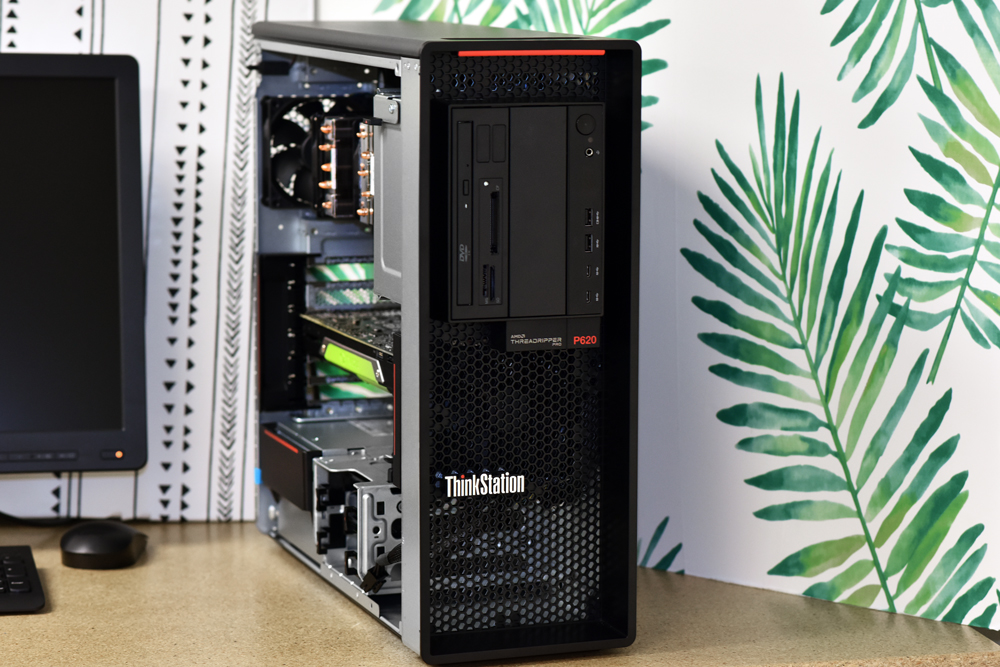 Looking at the Ryzen Threadripper PRO processor, it’s 64 cores, and why the P620 is a big deal for professionals and performance enthusiasts. Before this processor came along, the max single-socket core count was 18, with dual-processor Xeon systems being able to hit 56. The P620 offers a reasonably large jump, rivaling the core count in dual-socket systems with the single AMD CPU.

The AMD Threadripper PRO also has clock speeds up to 4.0GHz (with the 3945WX), core counts up to 64 (with the 3995WX), 128 lanes of PCIe 4.0 bandwidth, and 8-channel memory support. This performance-oriented CPU brings increased thermal requirements along with it though. AMD and Lenovo worked hand in hand for a custom-designed heat sink to handle the new requirements.

The P620 has other interesting hardware that helps boost up the power and potential. This includes up to 1TB of 3200MHz of memory. When it comes to storage, Lenovo claims users can pack up to 20TB but with four 3.5” bays, it can fit quite a bit more. The workstation supports PCIe Gen4, which we have seen can bring new levels of performance with the latest SSDs. The P620 can support up to two NVIDIA Quadro RTX 8000 or four RTX 4000 graphics cards satisfying most professional graphics needs.

This system lends its use pretty well to several types of power users. The ones Lenovo calls out are M&E: 3D animation, compositing, editing, creative finishing, or rendering, architecture, engineering, construction, manufacturing, product development, healthcare, financial services, and artificial intelligence. The potential performance offered by the P620 would help all of the above get through their complex jobs even faster. This is largely thanks to the Gen4 SSD support and of course the dedicated GPUs.

All of the above fields have concerns about security. To that end, the P620 comes with several advanced security features. This includes secure boot at the silicon level. On the Lenovo side, the workstation comes with Smart USB protection, self-healing BIOS, and ThinkShield security solutions. On the AMD side, the P620 features AMD Secure Processor that needs a validating code before it is executed. The partner company also has AMD Memory Guard which enables full memory encryption.

For the most part, the outside of the Lenovo ThinkStation P620 looks like the rest of their tower form factor workstations, dark gray to black with red highlights. The front of the tower is mainly taken up by ventilation. There is ThinkStation branding in the mid to bottom range.

Near the top is the front I/O including the power button and headphone jack. The workstation has four USB ports, two type-A, and two type-C. Our particular build has an optical drive and card readers. 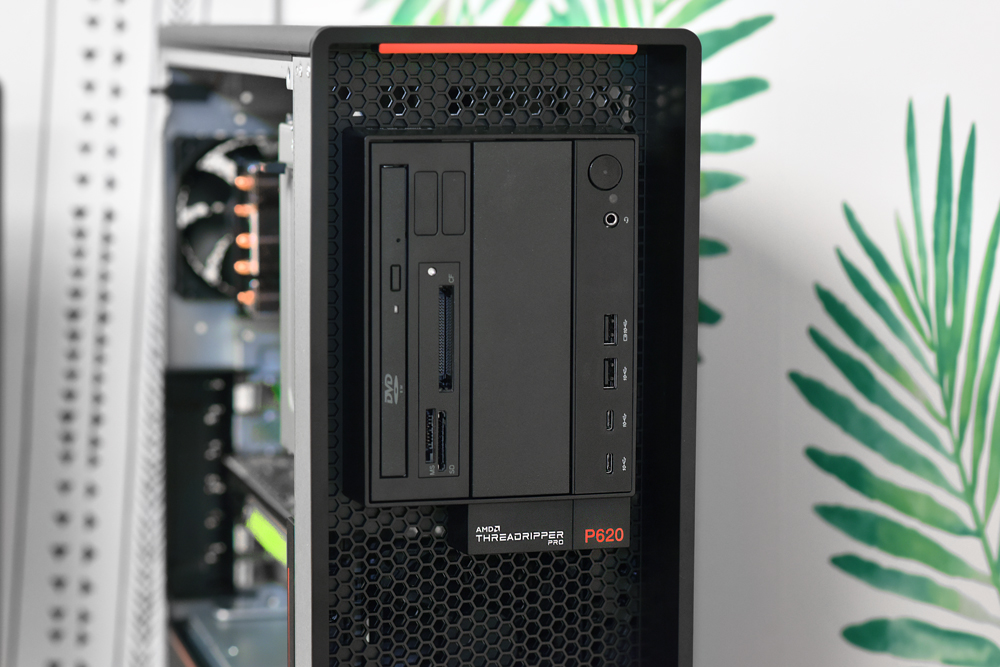 The rear of the workstation has a fan taking up a big chunk on the right. Here we see a 10GbE port, 6 USB ports, four gen3.2 ports, and two gen2 ports, a mouse and keyboard port, and three audio ports. 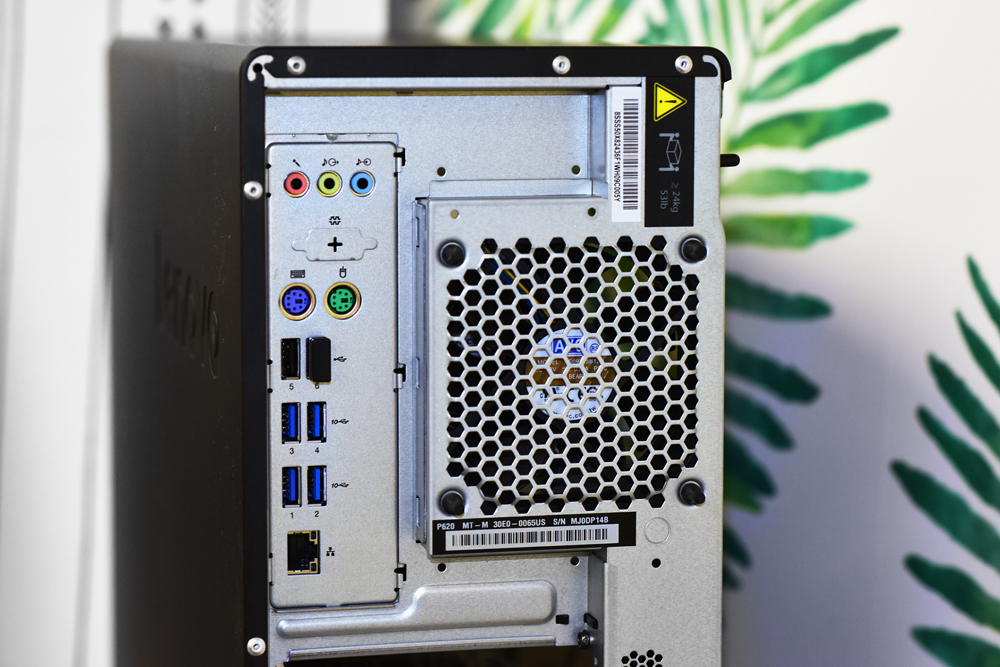 The rest of the rear is the PCIe expansion slots and the power at the bottom. 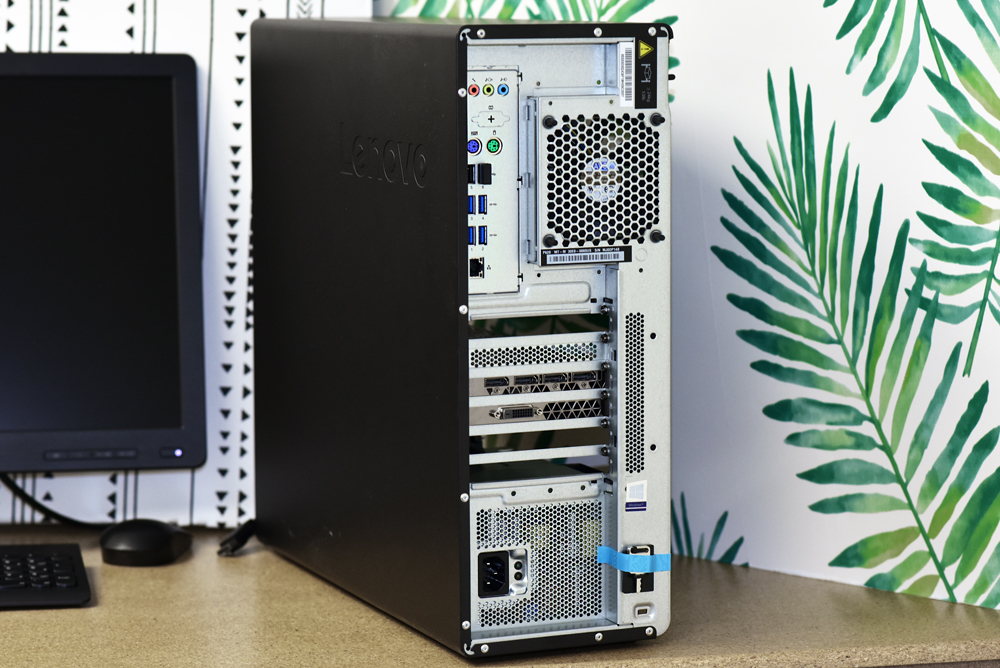 The front and back are fine and it is good to know where everything is, but what everyone cares about with this guy is what’s on the inside. With all things Lenovo, they make it very easy to get inside, poke around and upgrade as needed. Taking off the side cover we can easily see all the core components and get to them with ease. 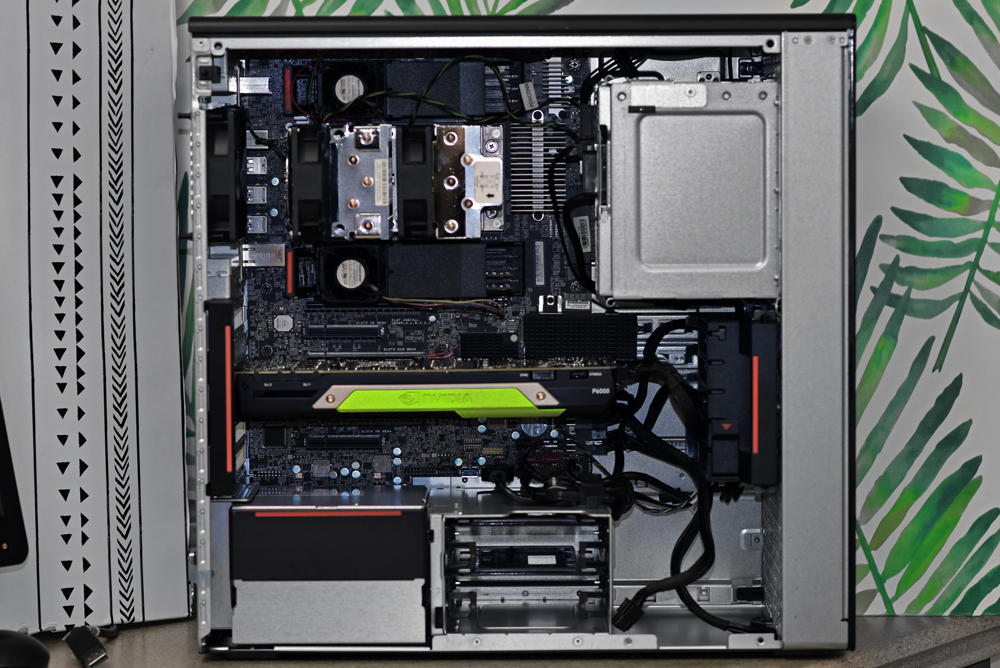 What’s cool to point out here is that the RAM slots have their own dedicated fans. While the CPU is crazy powerful, it does generate a lot of heat, and Lenovo and AMD have some nifty design tricks to help beat down any issues this may cause. 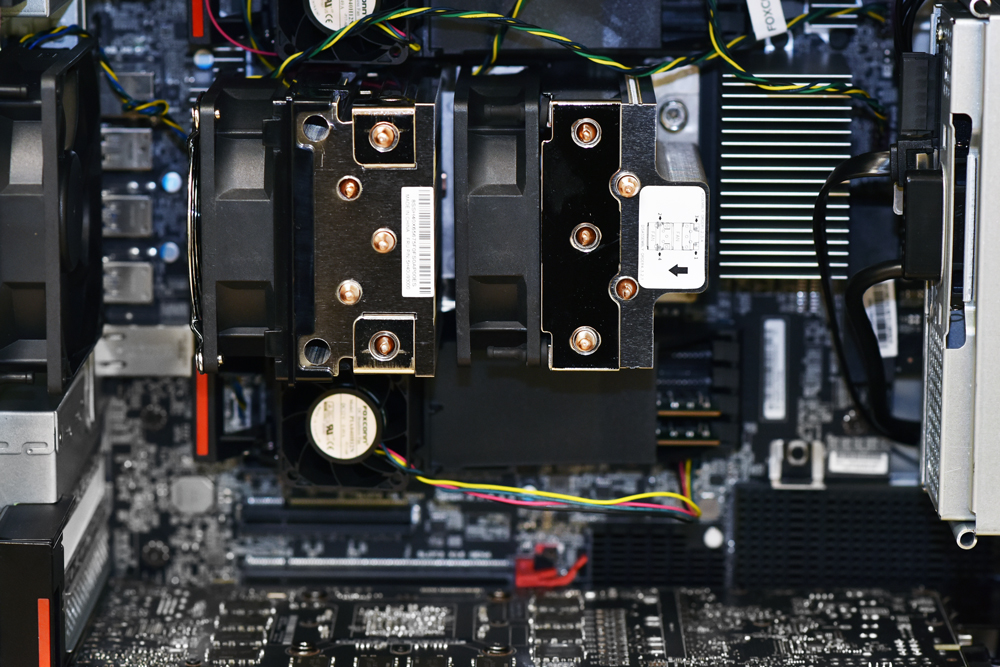 To see what the Lenovo ThinkStation P620 can do, we put it through a series of resource-intensive tests when outfitted with an AMD Ryzen Threadripper PRO 3995WX 64-Core processor, 4 x SK hynix 16GB DDR 3200MHz, a 1TB PM981 for storage, an NVIDIA Quadro P6000 and an NVIDIA Quadro RTX 8000. When it comes to processing power, it’s incredible to look at just how much compute power the 3995WX packs. At 2.7GHz across 64 cores, that works out to 185.6GHz of processing power. That is more than a top of the line dual-processor Intel-based server utilizing dual Xeon 8280 CPUs, each with 28 cores at 2.7GHz, totaling 151.2GHz.

We are also comparing it to the Lenovo ThinkStation P520, a similar configuration. For the P520 we reran our newer tests with the NVIDIA RTX 8000 to really see the difference in the CPUs. 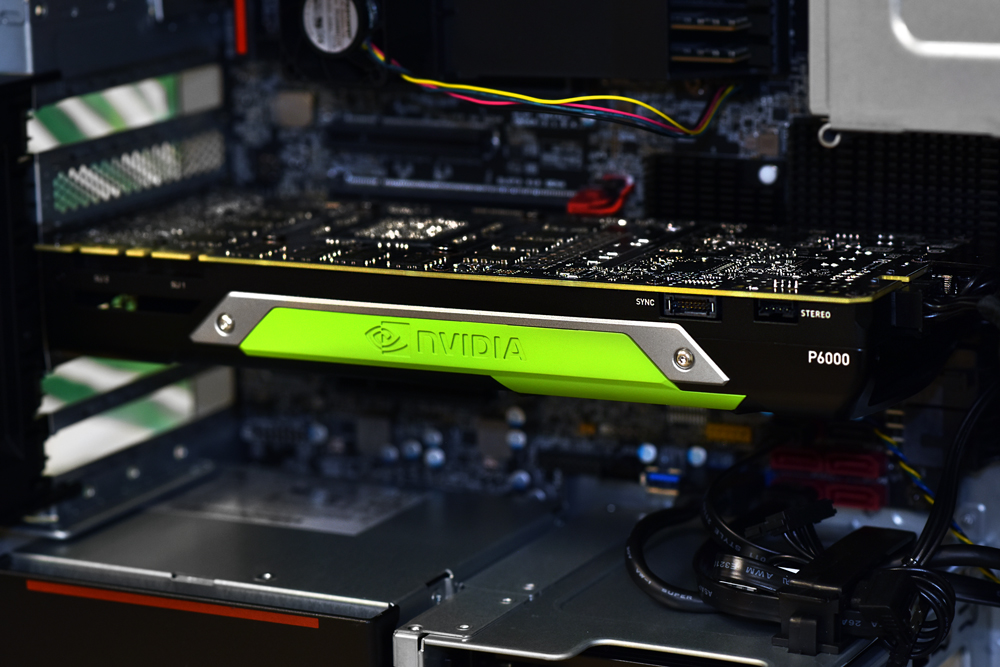 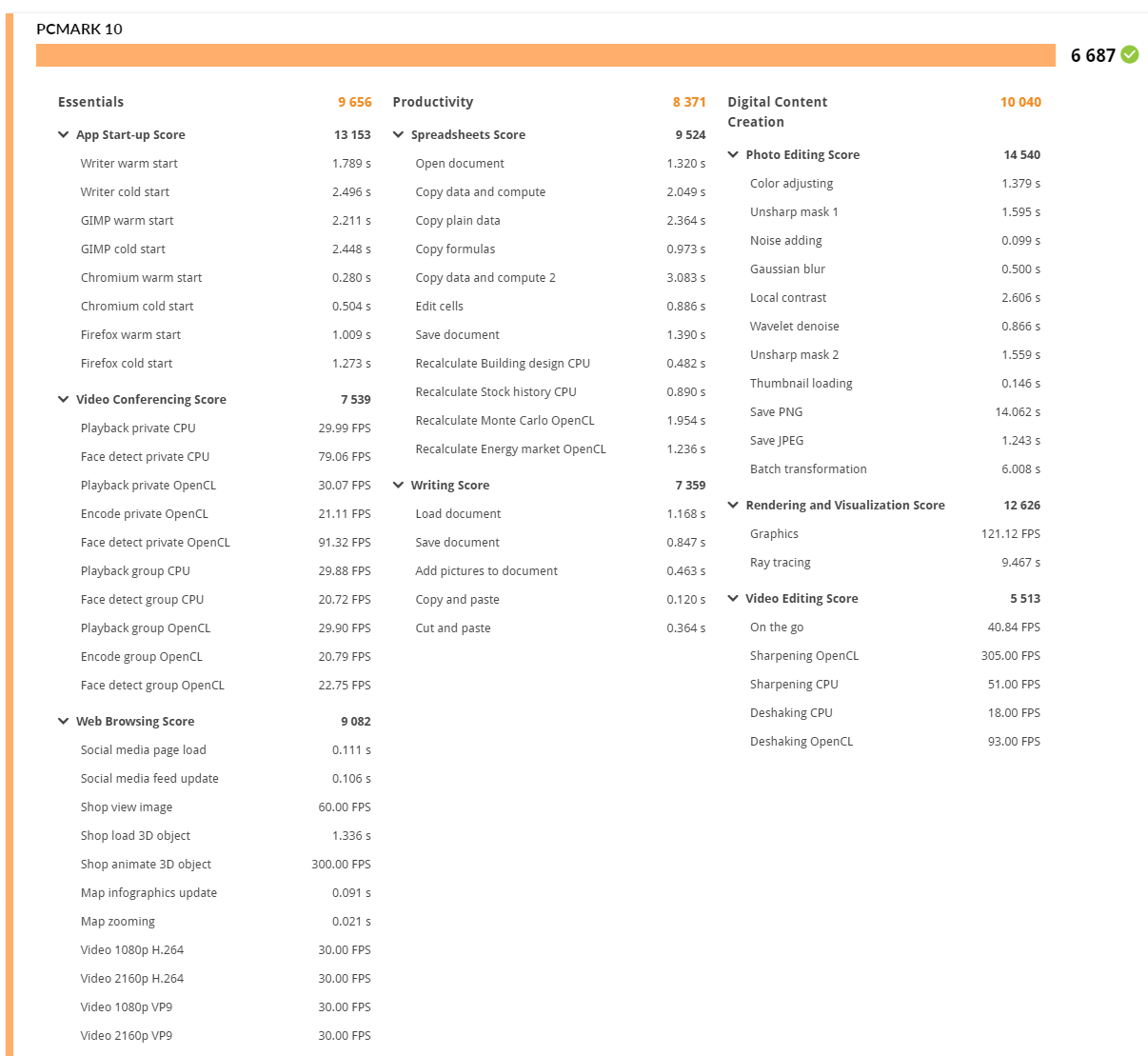 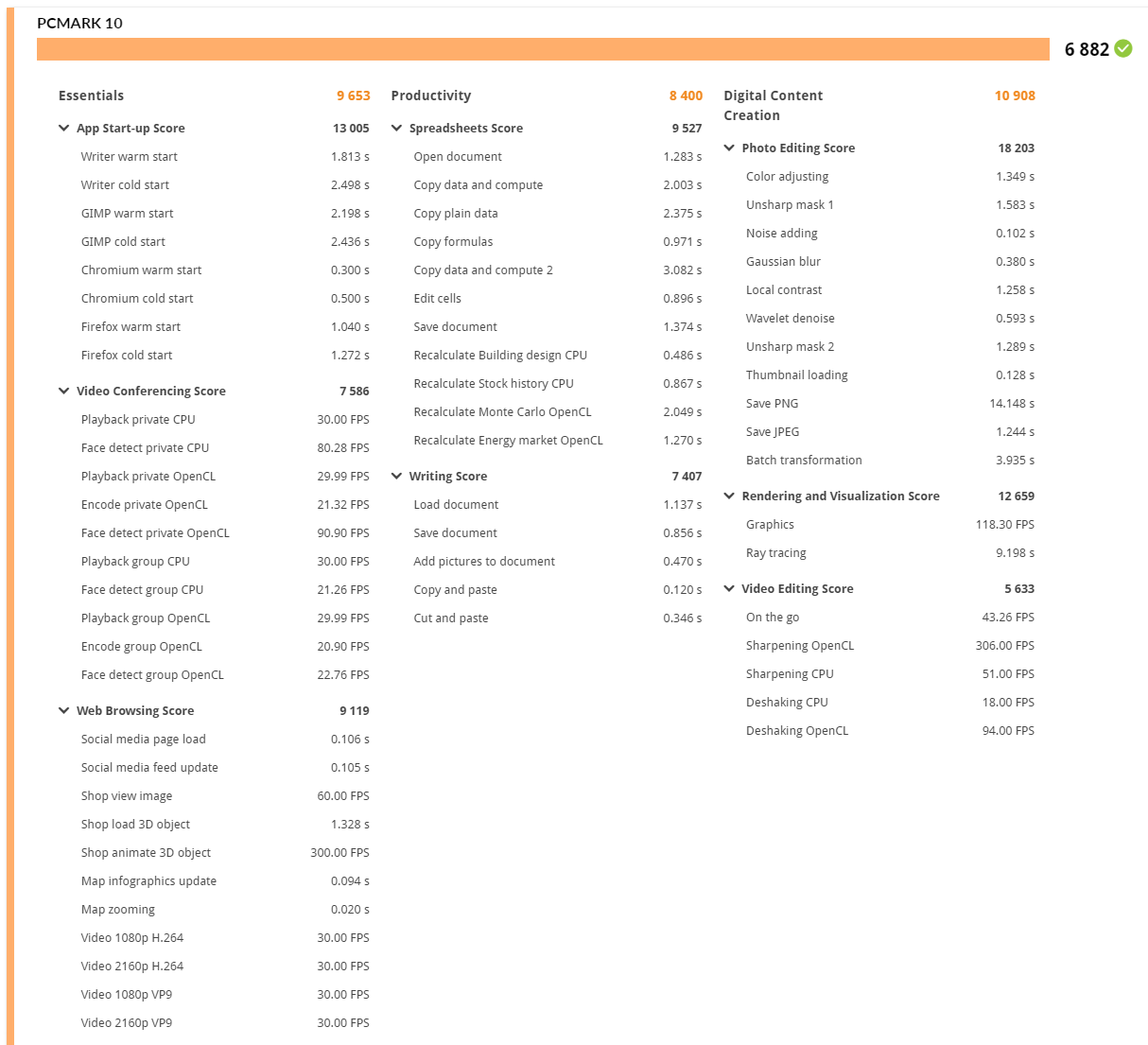 No real shock that the RTX 8000 outperformed the P6000. It should be noted, however, that both sets of results are impressive. Since this is mainly a graphical test, it is also no real surprise that the RTX 8000 in the P520 still brought impressive results, better than the P620 in a few cases.

It is really something to look at the P620 with its new processor versus the P520 with its Intel Xeon W-2145 CPU. In several instances, the performance is doubled or more. Quite impressive overall.

Our last test is the Environmental Systems Research Institute (Esri) benchmark. Esri is a supplier of Geographic Information System (GIS) software. Esri’s Performance Team designed their PerfTool add-in scripts to automatically launch the ArcGIS Pro. This application uses a “ZoomToBookmarks” function to browse various pre-defined bookmarks and create a log file with all the key data points required to predict the user experience. The script automatically loops the bookmarks three times to account for caching (memory and disk cache). In other words, this benchmark simulates heavy graphical use that one might see through Esri’s ArcGIS Pro software.

The tests consist of three main datasets: two are 3-D city views of Philadelphia, PA and Montreal, QC, which contain textured 3-D multipatch buildings draped on a terrain model and draped aerial images. The third dataset is a 2-D map view of the Portland, OR region. This data contains detailed information for roads, landuse parcels, parks and schools, rivers, lakes, and hillshaded terrain.

The Lenovo ThinkStation P620 is a tower form factor workstation and quite the powerhouse thanks to the AMD Ryzen Threadripper PRO processor. This CPU has up to 64 cores with the 3995WX, and that is with only one processor; this high level of core count is something one would normally see in a server. The CPU can hit 4.0GHz, has 128 lanes of PCIe 4.0 bandwidth and supports 8-channel memory support with up to a 1TB DRAM footprint. Since the workstation is aimed at power users, it can also house up to two ultra-high-end GPUs or up to four high-end GPUs. The workstation supports SATA and M.2 NVMe storage, but the expansion slots can be used to add more. 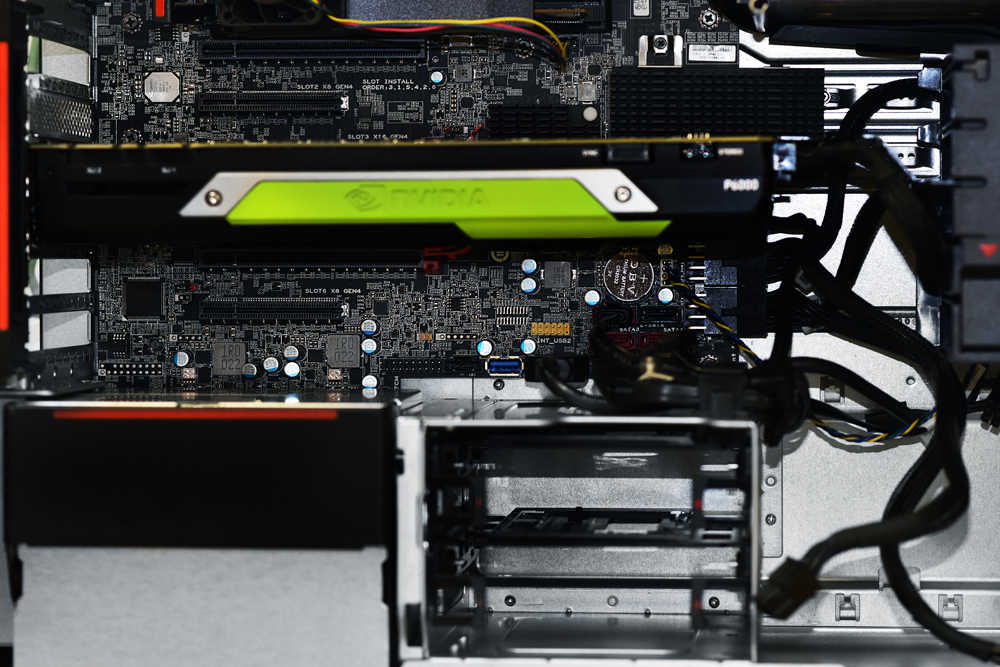 For system performance, we ran our normal barrage of graphics-based tests with a few that look at overall workstation performance. We ran both the NVIDIA Quadro P6000 and RTX 8000 in the P620. We also compared it to the Lenovo ThinkStation P520 to give readers a good idea of where the CPU can make a difference.

In PCMark 10 the new workstation performed higher but not by a massive amount. SPECworkstation3 on the other hand showed a day and night difference with the P620 at times doubling the P520’s performance. The graphic tests were similar. SPECviewperf 2020 didn’t really show a vast difference between the two workstations. On the other hand, ArcGIS, showed a nice improvement in the RTX 8000 comparisons.

To cut this off before we hear it on Reddit, no we didn’t specifically look at storage. I know someone in their best Comic Book Guy voice will say, I didn’t know this was WorkstationReview, worst review ever. However, we have another review in the works to look at how the new CPU effects storage, so hold tight, we’ll have it up soon.

The Lenovo ThinkStation P620, with the AMD Ryzen Threadripper PRO processor, brings a huge performance increase to a workstation, with a single socket no less. To compete with this with an Intel platform, you’d need to jump to a dual-socket platform at a much higher system cost. Overall the workstation market is dramatically changing with the AMD Threadripper PRO CPU bringing massive compute power and PCIe Gen4 to the workstation market. The Lenovo P620 is a perfect vessel for this new tech and should be high on the wish list of any high-end professional.