The Lenovo ThinkSystem ST250 V2 is a single-socket server for small businesses supporting on-premise setups. It’s ideal for office tasks, especially filesharing and surveillance because of its highly versatile storage options. Configurations can include 16 2.5-inch, eight 2.5-inch, or a mix of 2.5- and 3.5-inch drives which support simple or hot-swapping. Despite its budget positioning, the ST250 V2 has enterprise-grade remote management features and is easy to service and upgrade.

The Lenovo ThinkSystem ST250 V2 is a single-socket server for small businesses supporting on-premise setups. It’s ideal for office tasks, especially filesharing and surveillance because of its highly versatile storage options. Configurations can include 16 2.5-inch, eight 2.5-inch, or a mix of 2.5- and 3.5-inch drives which support simple or hot-swapping. Despite its budget positioning, the ST250 V2 has enterprise-grade remote management features and is easy to service and upgrade.

The ThinkSystem ST250 V2 is a single-socket tower server that can also work as a 4U rackmount server. Its processing power comes from a single Intel Xeon or Core chip, topping out at an eight-core Intel Xeon E-2200. The memory ceiling is 128GB of DDR4 via four DIMM slots. 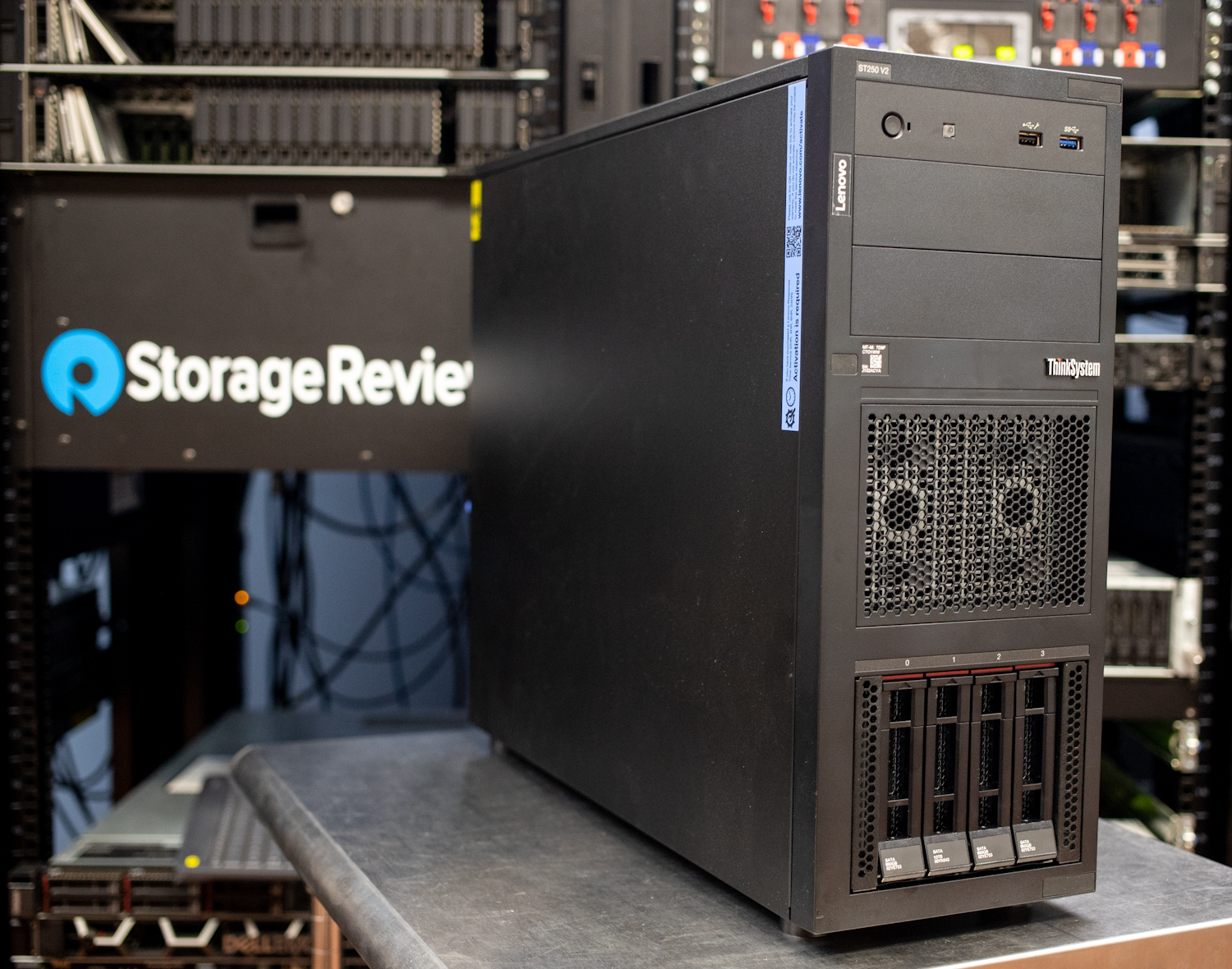 Storage options are where this server excels, which is impressive for an entry-level server. The front panel offers your choice of 16 2.5-inch or eight 3.5-inch SATA/SAS drives which support simple or hot swapping. You can mix and match drive sizes, such as eight 2.5-inch and four 3.5-inch.

There are also two 5.25-inch bays for devices such as tape drives or optical drives. Further expansion comes from four PCIe slots, which can be used for RAID adapters, Ethernet, Fibre Channel or SAS/RAID adapters, and even low-power GPUs for AI inference. Power options start at a fixed 250-watt power supply and scale to hot-swap 550-watt models.

The ThinkSystem ST250 V2 comes standard with an attractive three-year warranty with next-business-day service. Its full specifications are as follows.

The ST250 V2 as a tower looks much like a large desktop PC, and that’s part of its appeal for small businesses. This system doesn’t require a server room or a special operating environment. In fact, it would work fine under a desk. In tower form, it measures 6.9 by 17.5 by 22.8 inches (WDH) and weighs 51.94 pounds fully configured. Rack-mounting requires ordering the optional rackmount kit.

Our unit doesn’t have it, but the ThinkSystem ST250 V2 is orderable with a lockable front panel for security. Our unit doesn’t have any 5.25-inch bay devices, but they’re simple to add later. Our storage drive configuration is four 3.5-inch drives in the lower drive bay and nothing in the top drive bay. Each 3.5-inch drive has its own caddy and a finger loop for swapping out. 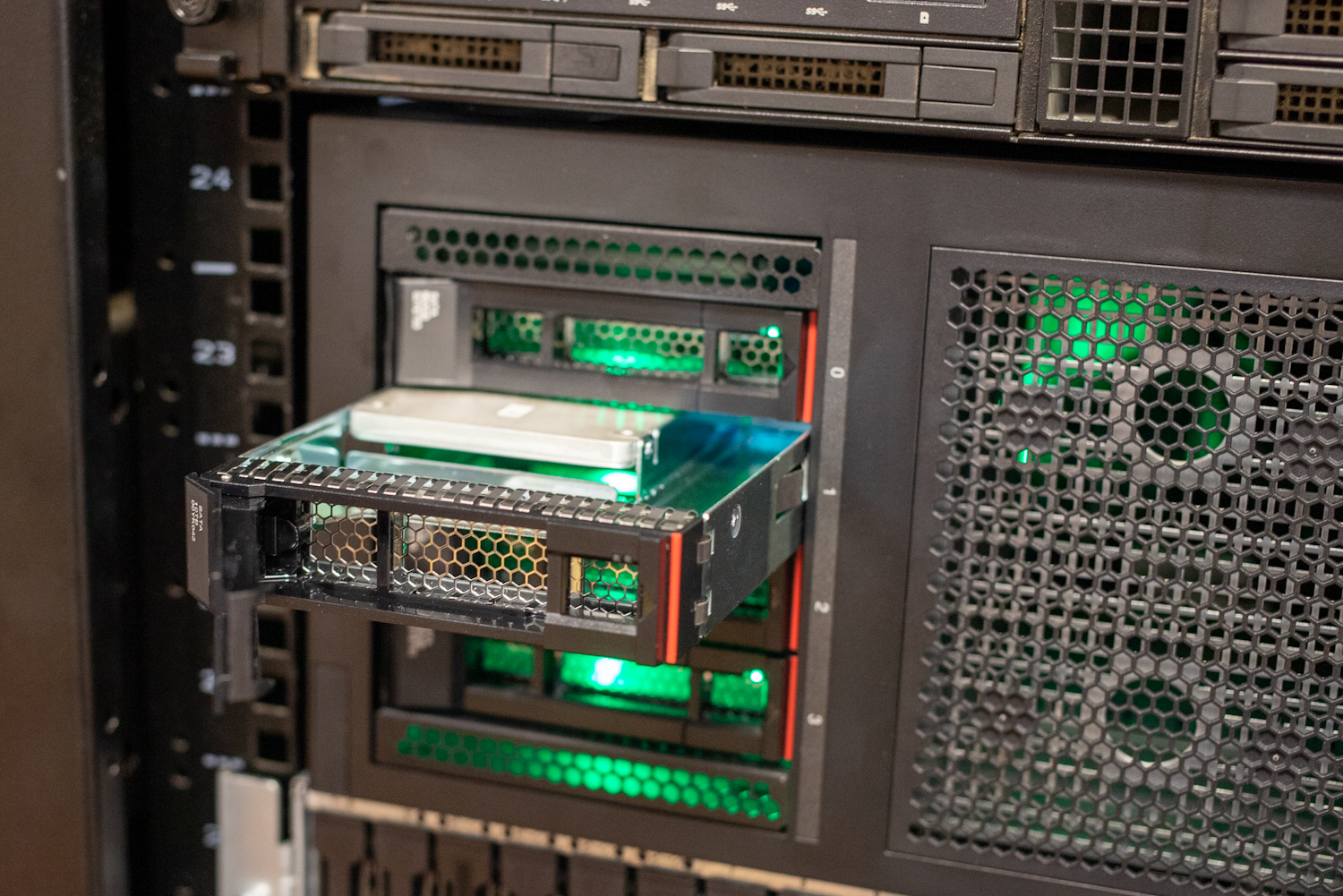 Front ports include a USB-A 3.1 Gen 1 and a USB 2.0, the latter supporting Lenovo’s XClarity Mobile devices. Using the XClarity mobile app, you can plug a mobile device into this port and manage the server just like Lenovo’s enterprise-grade ThinkSystem servers. 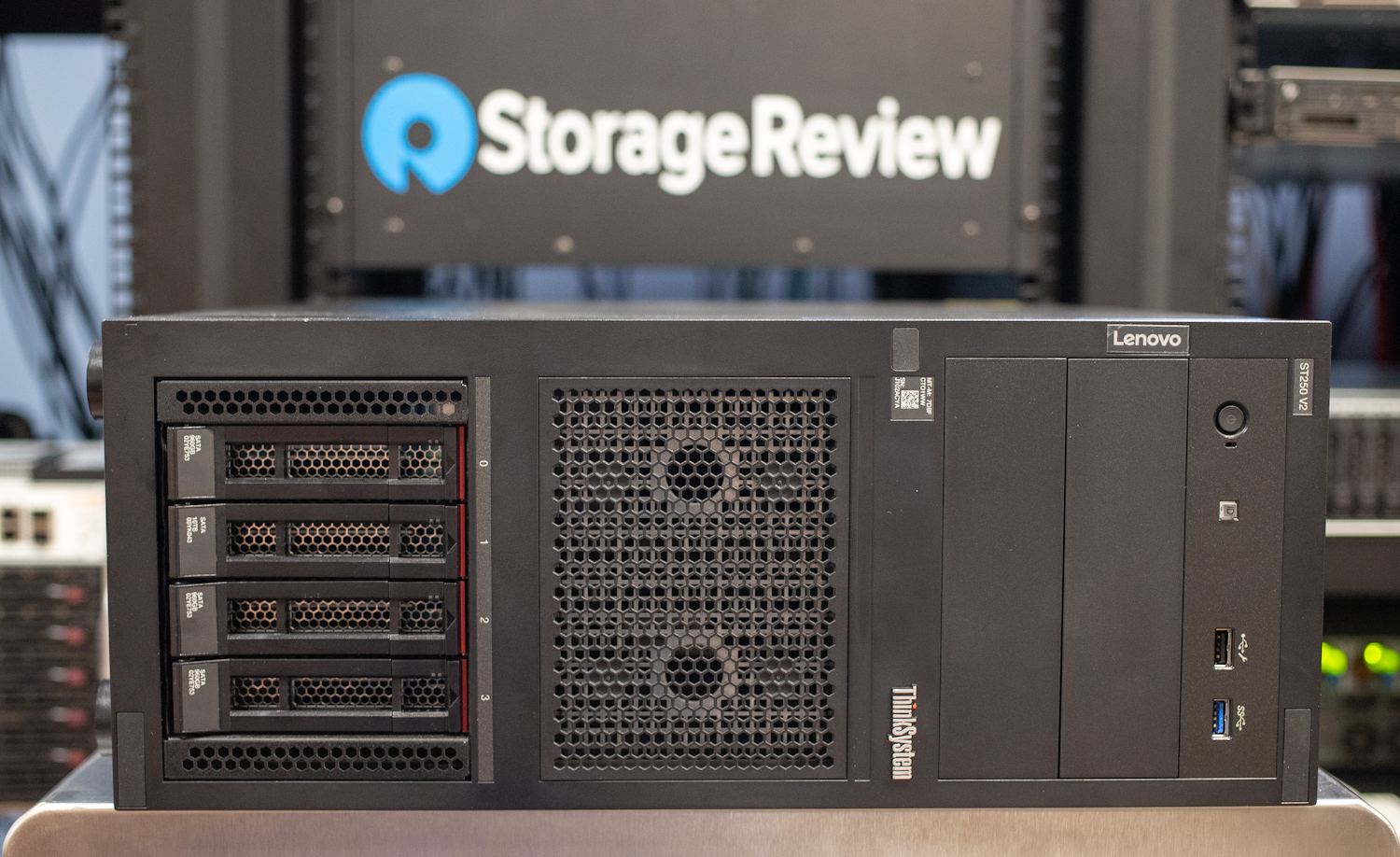 There are also LEDs here for power, drive, and network activity, plus an error LED. A system ID LED is useful for identifying this server in a crowded environment; it can be turned on remotely via XClarity. 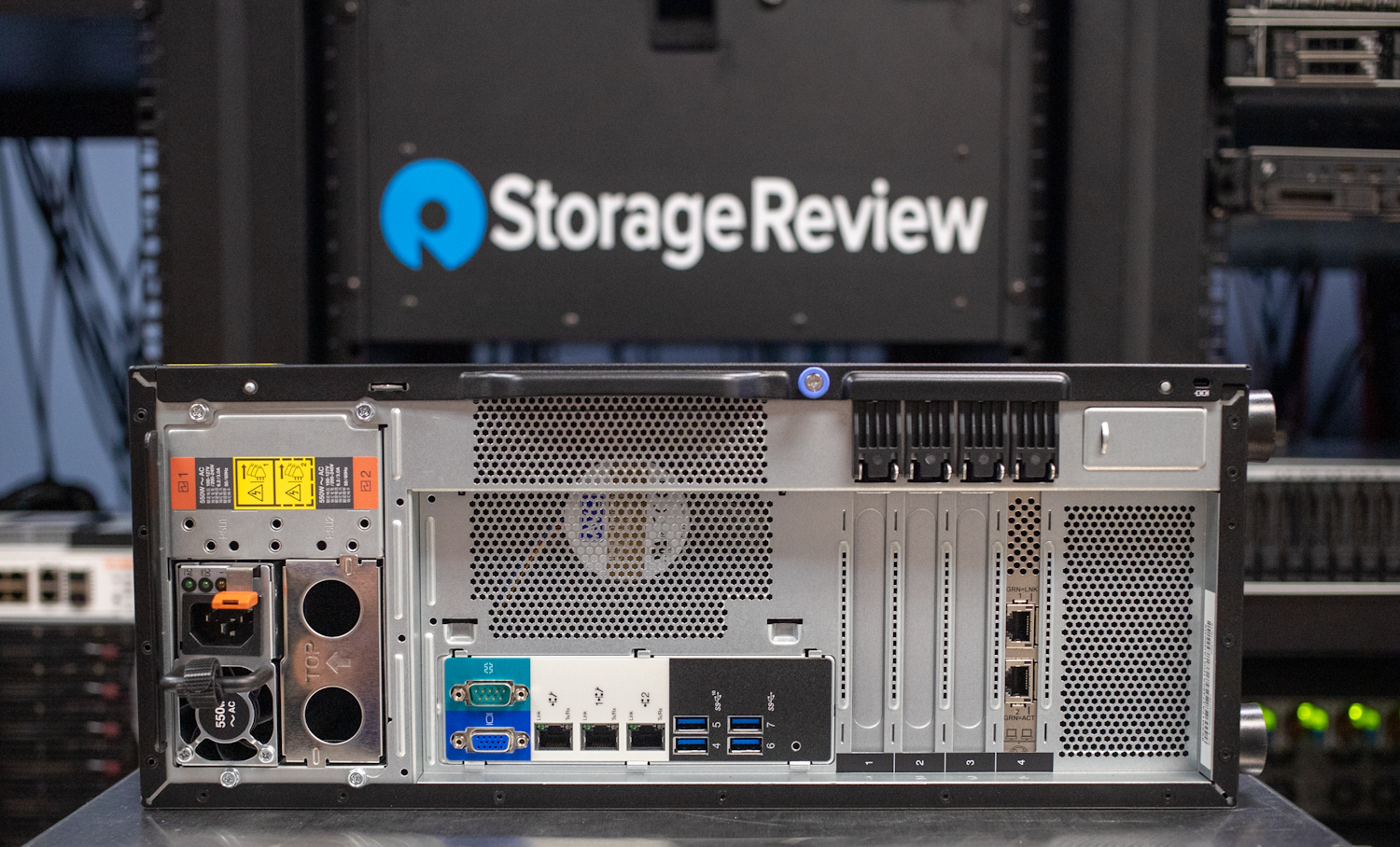 Motherboard connectivity includes VGA-out, Serial, two USB-A 3.2 Gen 2 ports, and a USB-A 3.2 Gen 1 port. The Ethernet port next to the VGA port is for XClarity support, and the other two are Gigabit. Just above the motherboard is the exhaust vent for the single cooling fan. You can also see the top-mounted power supply(s); our unit has one modular power supply, though if you don’t need hot-swap capability or lots of power, you can save money with the base fixed 250-watt power supply.

The right door slides off after removing a thumbscrew. It has an old-fashioned padlock loop if you want to secure it that way in addition to a Kensington-style slot. There is an intrusion switch much like a higher-end server. 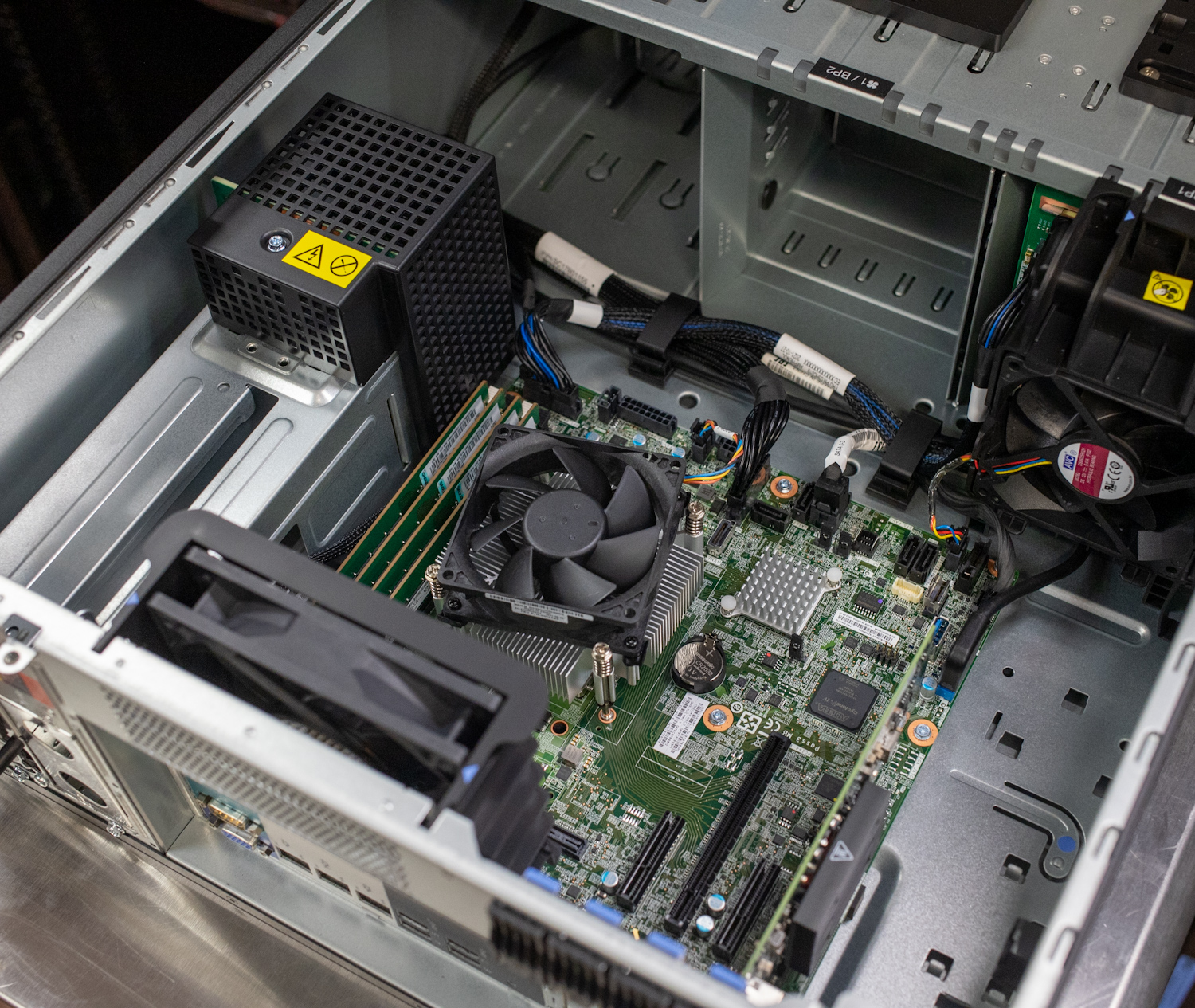 The inside is neatly laid out as expected from a ThinkSystem. Servicing is simple; blue symbols indicate how components can be removed. The inside of the access door also has a handy motherboard diagram. The motherboard has an M.2 SSD slot so you don’t need to sacrifice a drive bay for the boot OS. 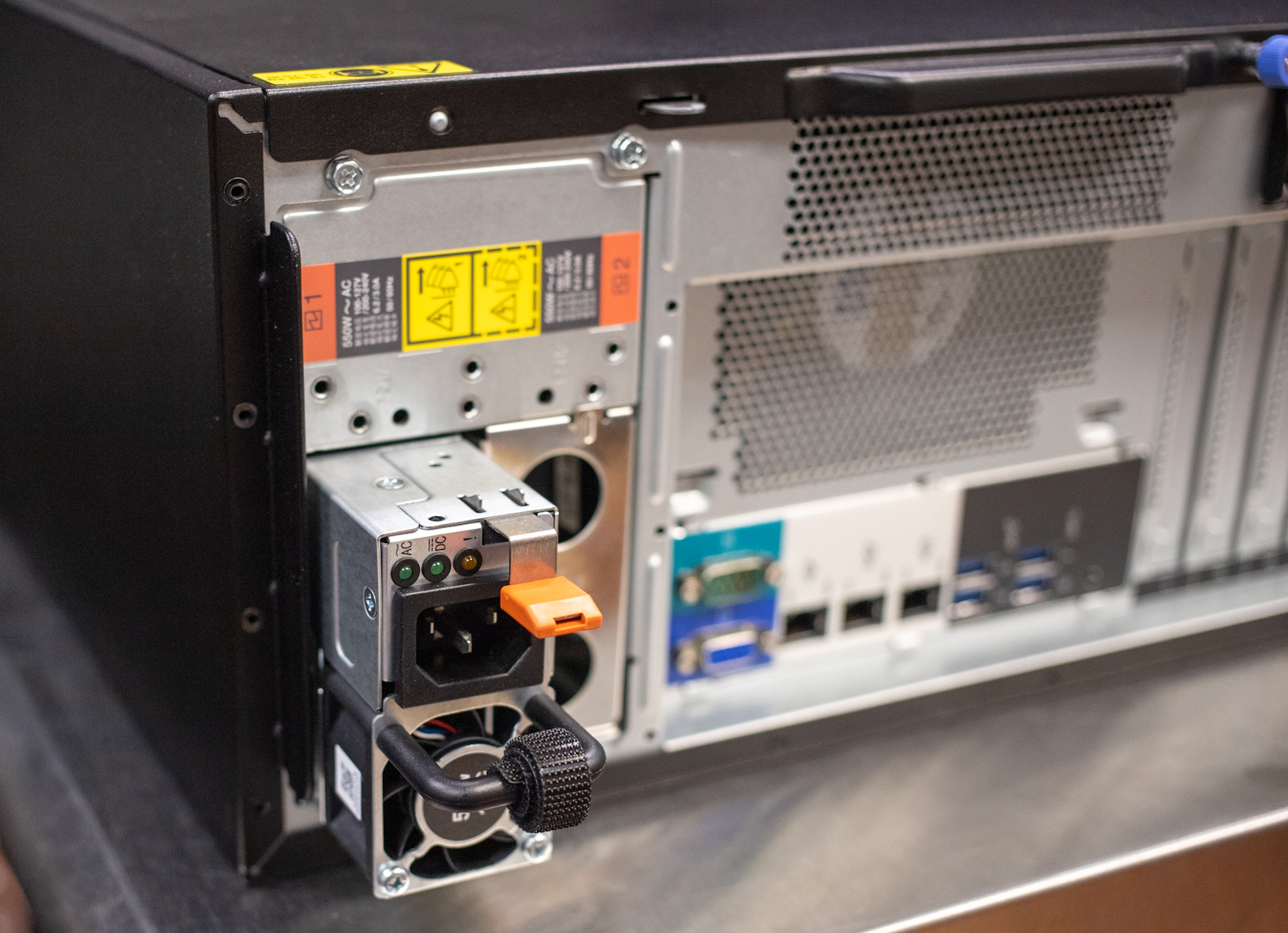 Cooling is front to back; there are one or two front system fans and a rear exhaust fan. Lenovo says the ThinkSystem ST250 V2 is very quiet, just 31db since the fans are large and don’t have to spin quickly.

We installed Windows Server 2022 on the ThinkSystem ST250 V2. We had to change the SATA mode from RAID to AHCI to make this happen. 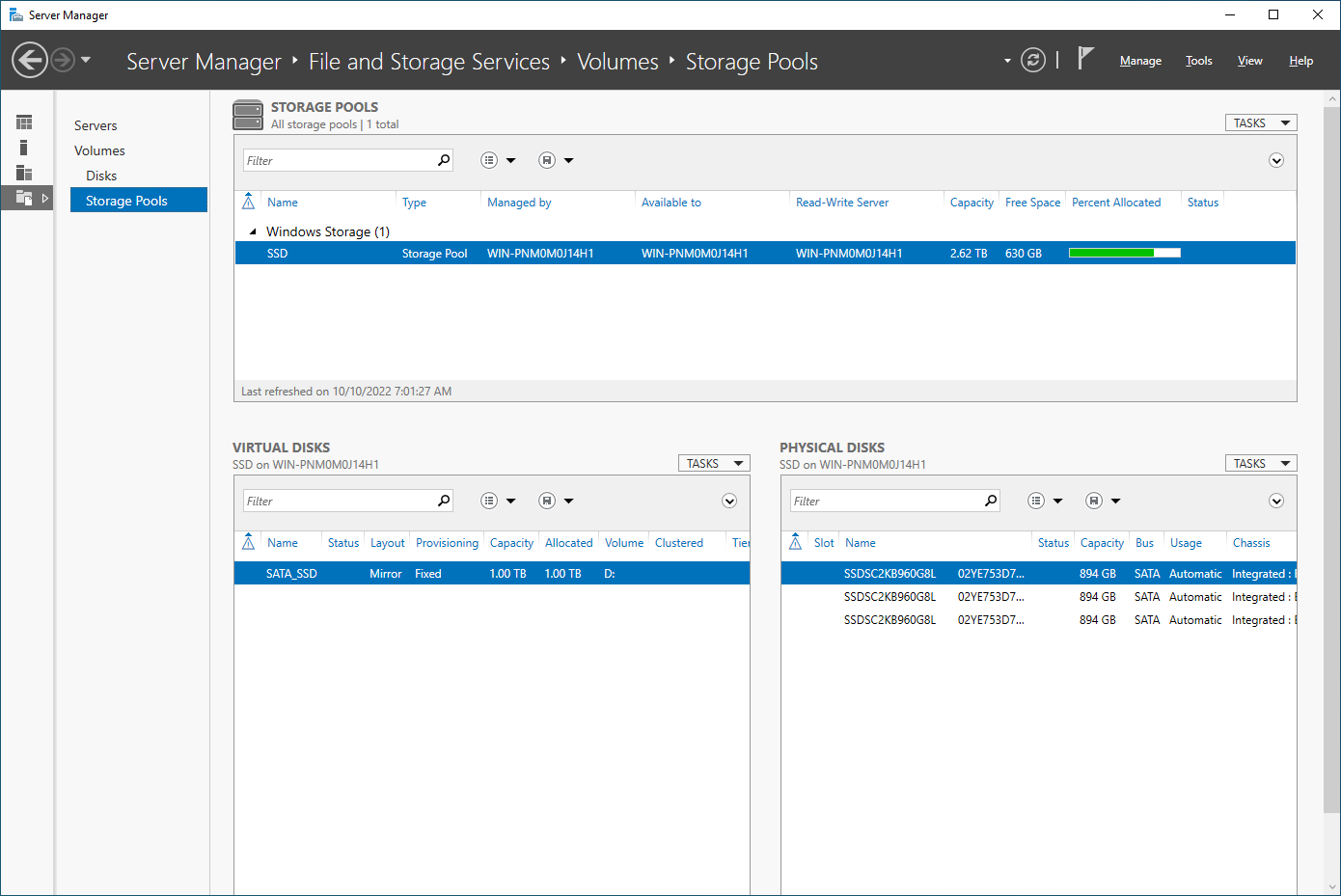 Creating a storage pool from the four 960GB SSDs in our review unit went smoothly. 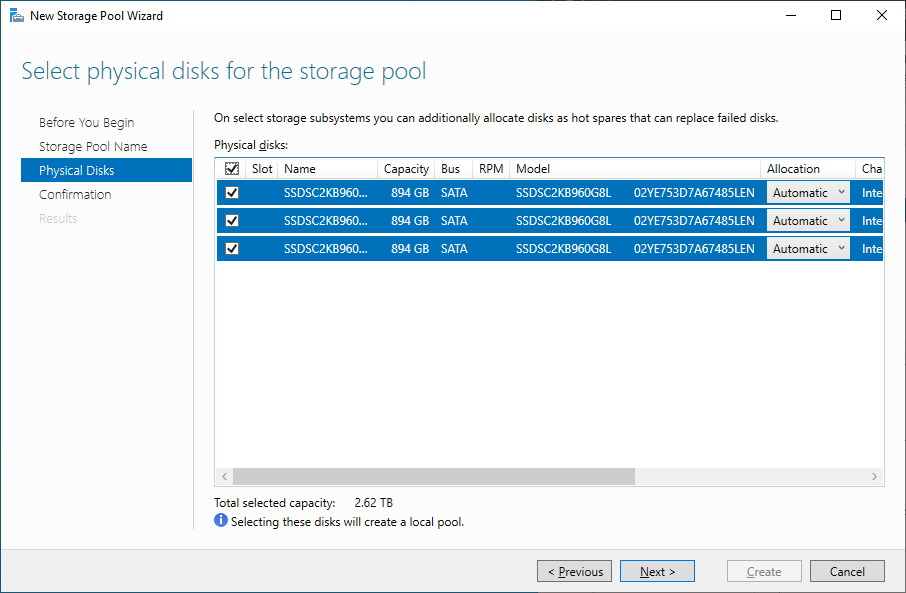 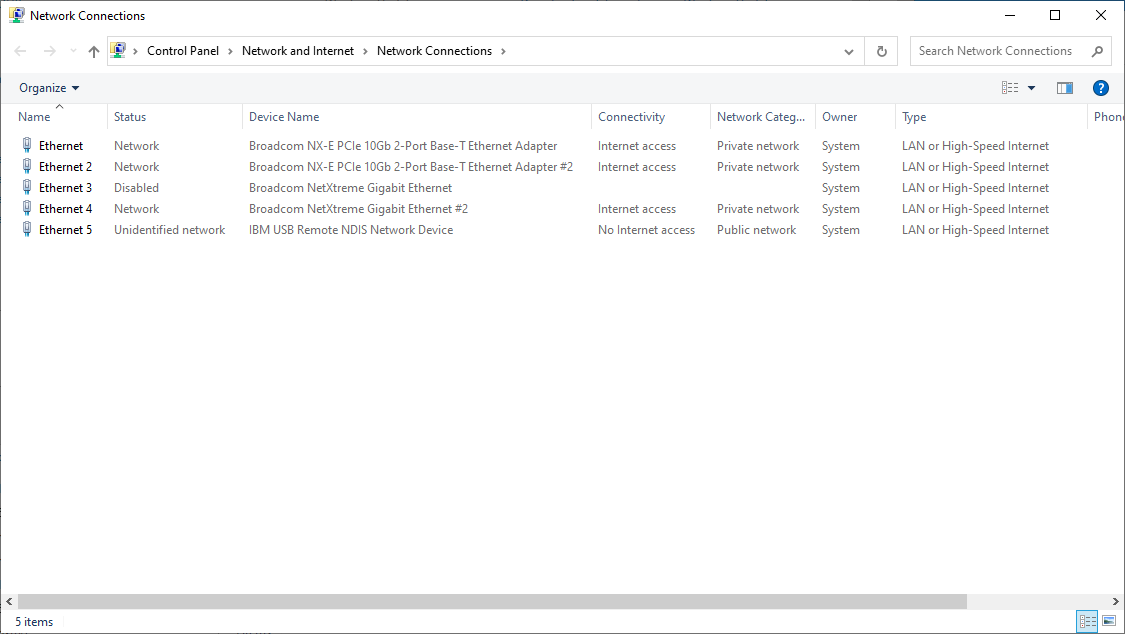 We limited our testing to IOMeter because of our very basic review configuration. We ran the test in 1-thread and 4-thread modes, the latter being more demanding. It performed as expected for four SATA drives.

The Lenovo ThinkSystem ST250 V2 is a solid server for home offices and small businesses desiring a multipurpose on-premise server. Processing power isn’t its forte, with a single Intel CPU with up to eight cores, but it has a reasonable memory ceiling (128GB) and offers four PCIe expansion slots. It can even accept low-power GPUs.

Storage configurations are where this server shines, accepting up to 16 2.5-inch drives or eight 3.5-inch drives, or a combination of two. SAS/SATA drives and hot swapping are supported. This server also goes above and beyond with its management features, which include XClarity remote management through IPMI or a mobile device with the XClarity app.

Those on a budget will also be glad the standard warranty is three years and includes onsite service. Overall, the ThinkSystem ST250 V2 is well-rounded and should serve its target audience well.