The Precision 7670 is Dell’s flagship 16-inch mobile workstation. It aims for desktop-like performance, thanks to Intel’s new Core HX-class processors and Dell CAMM memory, which scales to 128GB. It also features a 16:10 OLED screen, three Gen 4 NVMe storage drives, and excellent build quality. For mobile productivity, the Precision 7670 is an asset.

The Precision 7670 is Dell’s flagship 16-inch mobile workstation. It aims for desktop-like performance, thanks to Intel’s new Core HX-class processors and Dell CAMM memory, which scales to 128GB. It also features a 16:10 OLED screen, three Gen 4 NVMe storage drives, and excellent build quality. For mobile productivity, the Precision 7670 is an asset. 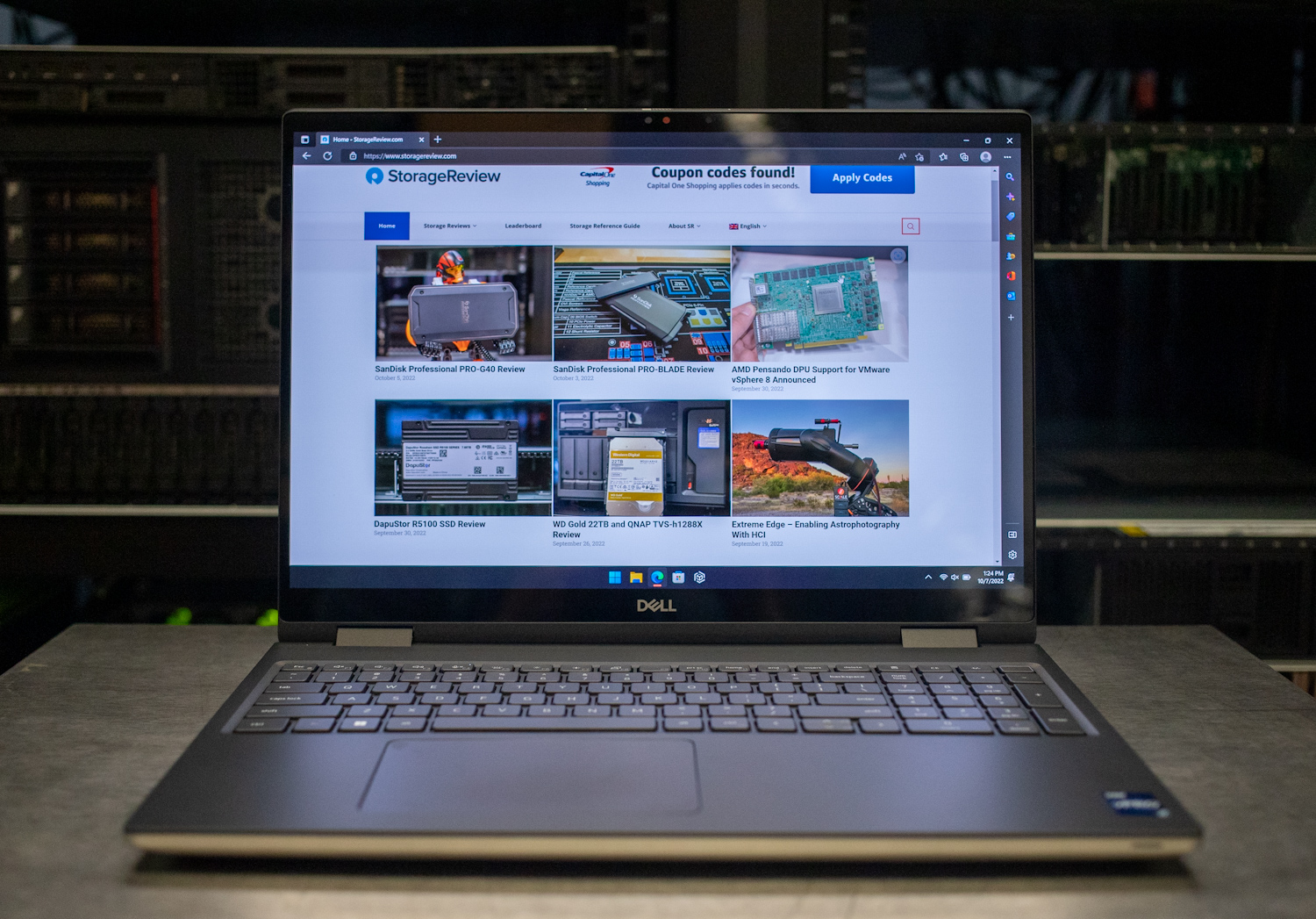 The Precision 7670 is on a higher performance level than previous-generation workstations because of the Intel Core HX-class processor. This chip has a 55-watt processor base power, up from the 45 watts of Intel’s traditional desktop-replacement H-class chips. Dell has had to implement more advanced cooling to handle this chip.

The Precision 7670 also differentiates itself from past Dell mobile workstations with CAMM memory support up to 128GB. (Hit that link for our write-up.) It’s also available with traditional SODIMMs, but those configurations have a 64GB memory ceiling (2x 32GB modules).

Graphics scale from integrated Intel graphics to the NVIDIA RTX A5500 16GB. For those using professional apps, the Precision 7670 has Independent Software Vendor (ISV) certifications. (See the app list.) These certifications are important for industries where accuracy is paramount.

This laptop’s hardware security features are numerous, including TPM 2.0, an optional FIPS fingerprint reader, and encrypted storage drives. It even has chassis intrusion and battery removal detection and other features to prevent tampering. Extensive management features and OOB systems management come from Dell’s Command software suite.

The Precision 7670’s full specifications are as follows:

The handsome aluminum chassis is what Dell calls Titan Gray. The build is exceptionally strong; no part of the chassis flexes under pressure, and the lid is impressively stiff. Build quality of this nature is expected (and always appreciated) on premium mobile workstations.

Our review model has the top-shelf OLED display option, with a UHD (3840×2400) resolution. It boasts a productive anti-glare surface and dazzles with a rated 500-nit brightness. Dell rates it for 100% DCI-P3 color gamut coverage. This display is suitable for color-sensitive work if calibrated. The FHD (1920×1080) camera above the display has a privacy shutter and infrared support for biometric logins. You can also log in using the fingerprint reader (with optional FIPS certification). 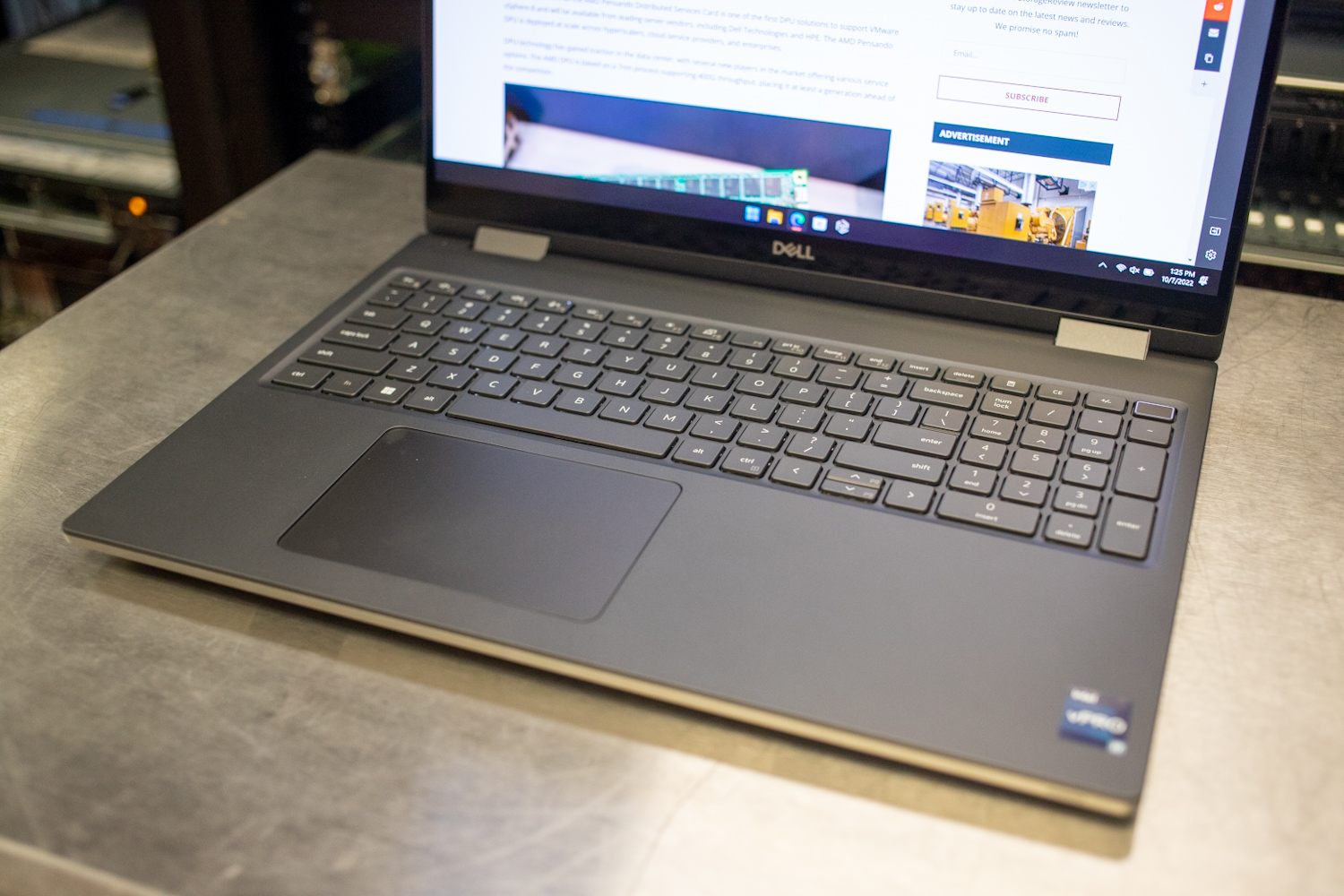 Not all 16-inch laptops squeeze in a numeric keypad, let alone a full-size one, but the Precision 7670 does so without a problem. The only layout oddity is the arrow key cluster, which is forced into the main keyboard area. The half-height up and down and full-size right and left keys lead to missed keystrokes; I’d prefer the left and right keys to be half-height, too. Otherwise, the keyboard offers a pleasant typing feel.

White backlighting makes for good contrast in the dark. Below, the full-size buttonless touchpad is nicely sized. The Precision 7670 foregoes the eraser-head pointing stick in the center of the keyboard that was often found on past Precision mobile workstations. 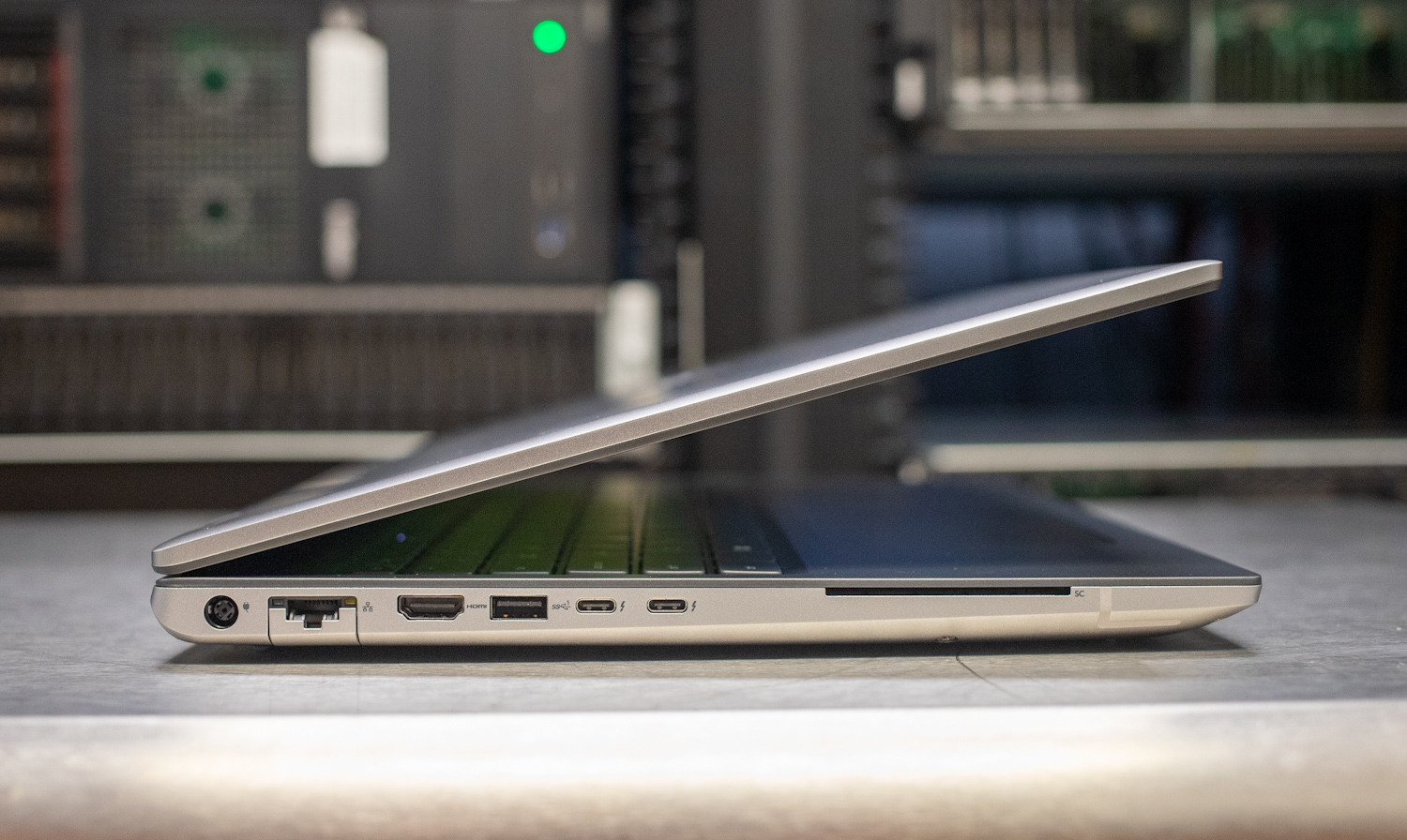 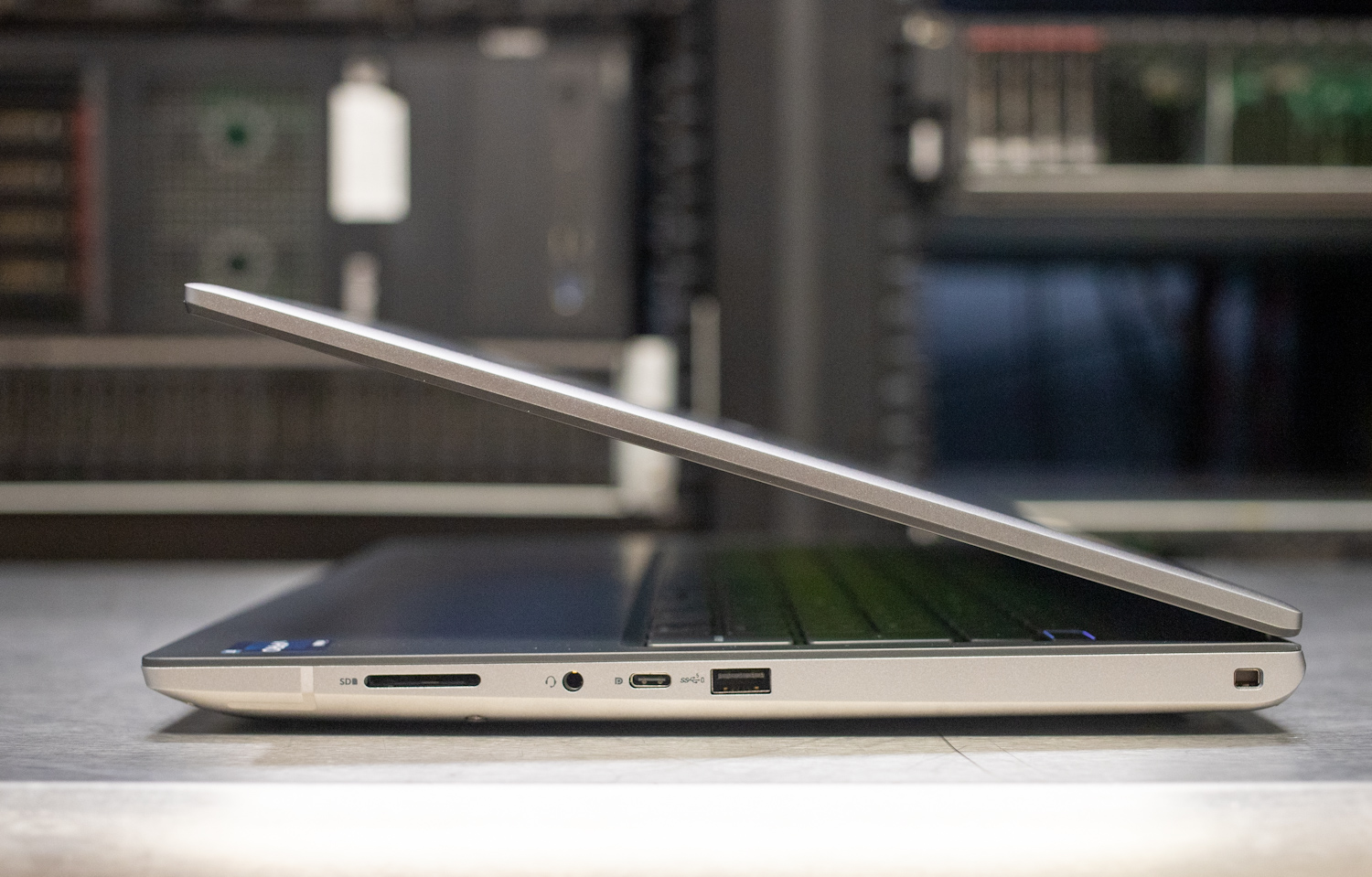 The Precision 7670 has good upgrade potential. Removing the bottom panel gives you access to the battery, storage, memory, and wireless card. One M.2 2280 Gen 4 slot is centered and the other is left of the battery. When equipped with an NVIDIA RTX A2000 graphics card like our unit, the Precision 7670 does not come with a third M.2 slot. 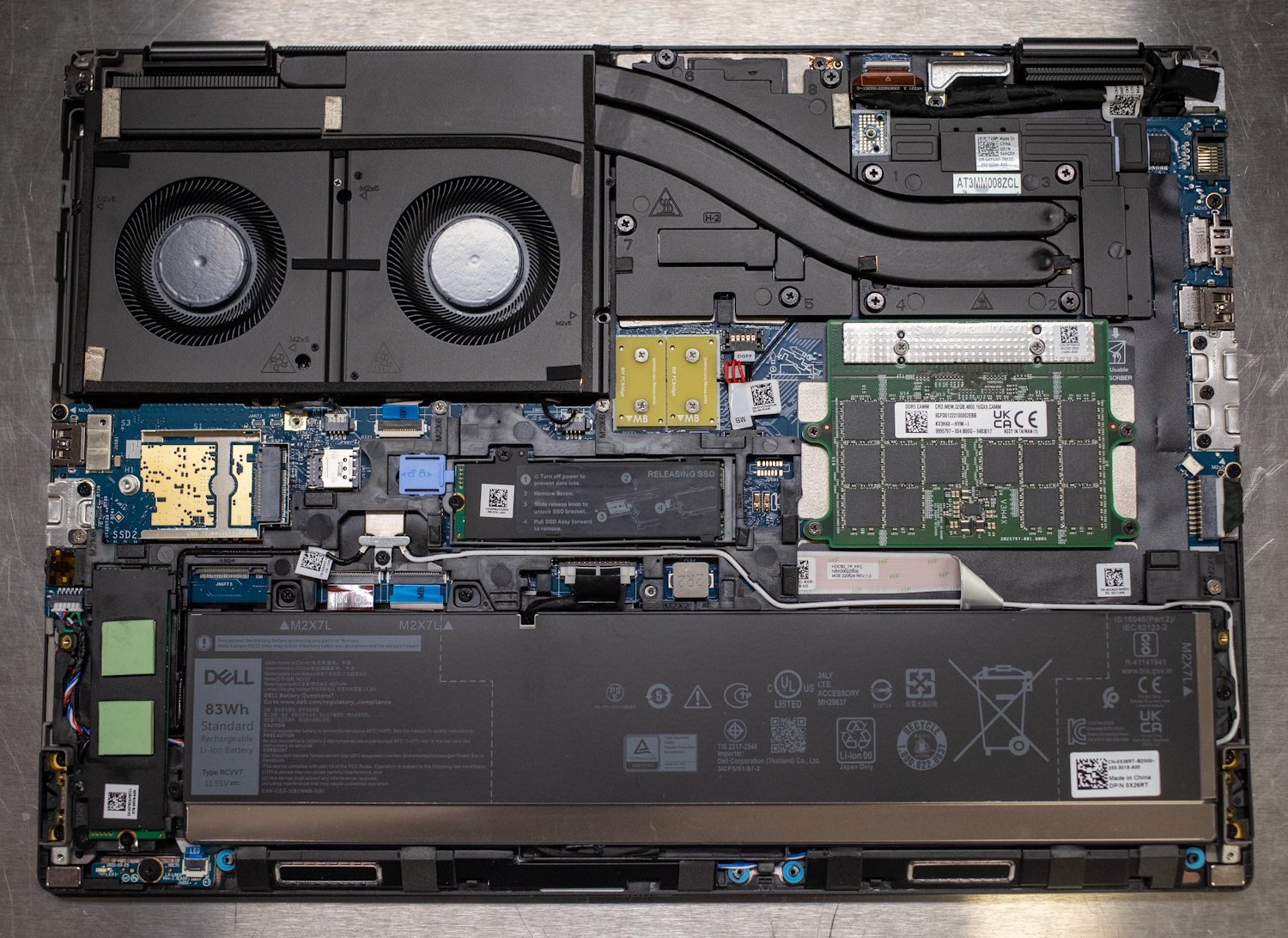 This Precision 7670 has Dell CAMM memory, which is one big piece. It allows this laptop to support 128GB of RAM, double the amount it supports with SODIMMs (64GB). See our in-depth article on the upcoming CAMM standard. Here’s what the module looks like removed. 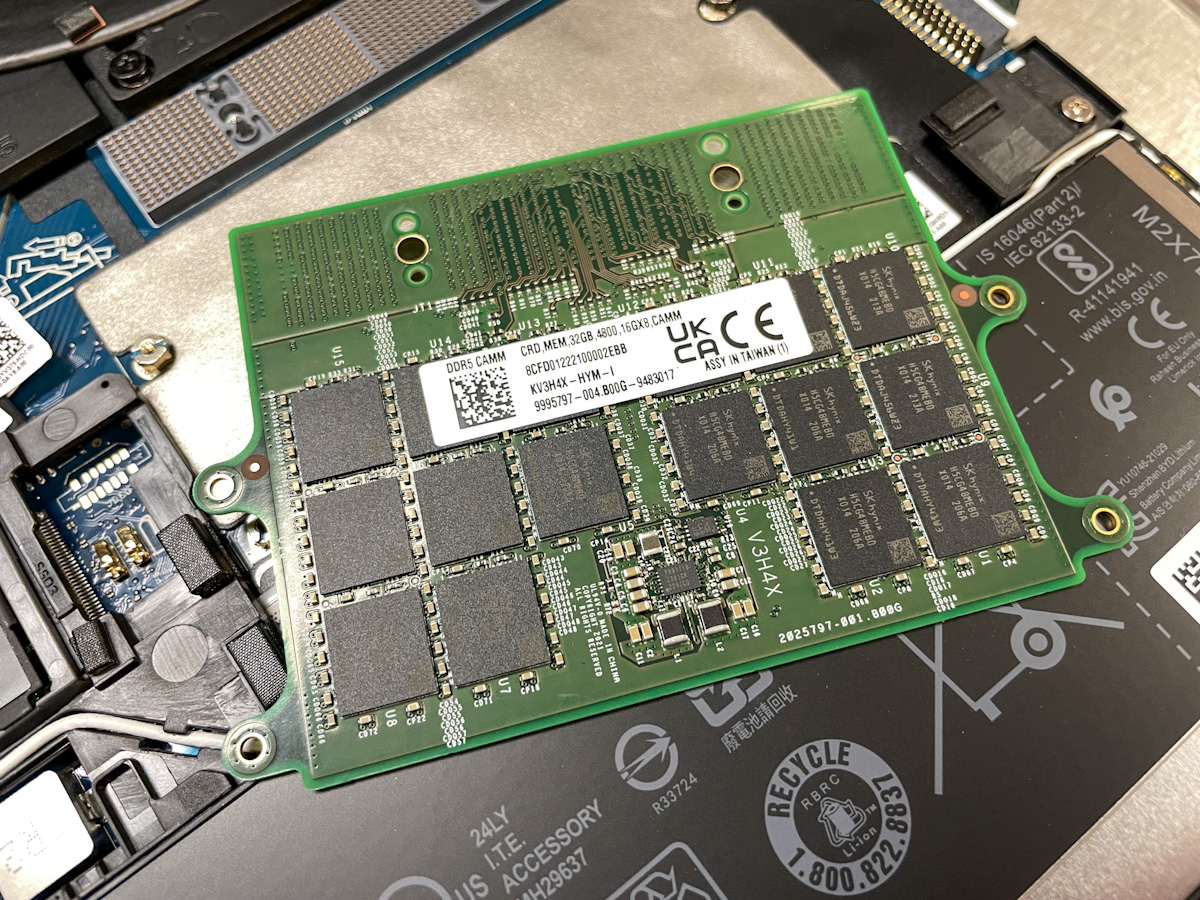 You can see the compression connector on the module’s bottom. 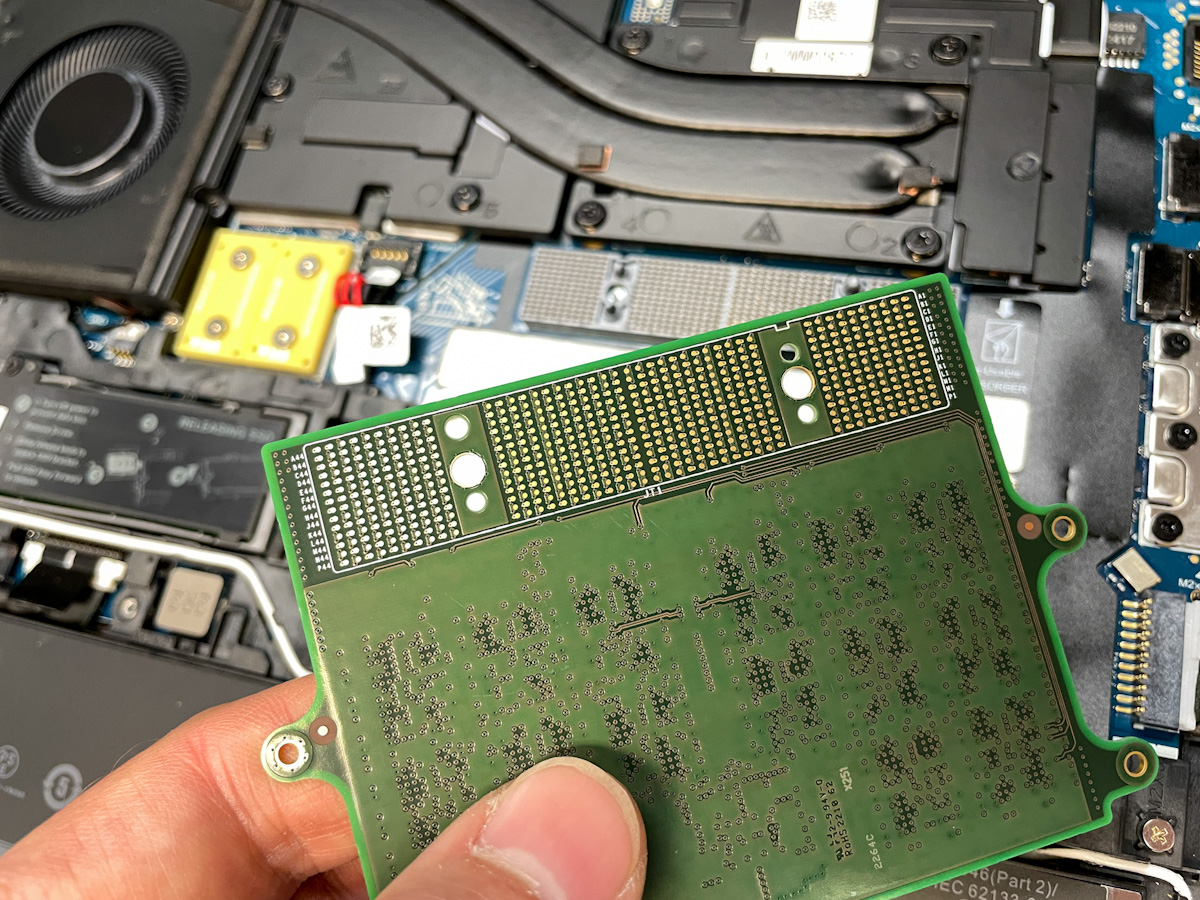 Our Precision 7670 review unit is configured as follows:

The Lenovo ThinkPad P16 directly competes with the Precision 7670, offering Intel Core HX-class processors and similar features. I configured it at $3,203 on Lenovo.com, which is much less than the Precision 7670, but these are enterprise-grade laptops typically bought in bulk; the prices quoted here are the individual unit prices. Enterprises will get more competitive pricing.

Our first test is SPECviewperf 2020, the worldwide standard for measuring graphics performance of professional applications under the OpenGL and Direct X application programming interfaces. The viewsets (or benchmarks) represent graphics content and behavior from actual applications, without having to install the applications themselves. The newest version of this benchmark went through major updates late last year, including new viewsets taken from traces of the latest versions of 3ds Max, Catia, Maya, and Solidworks applications. In addition, they added support within all viewsets for both 2K and 4K resolution displays. The Precision 7670 dominated this testing; its 8GB variant of the RTX A2000 and faster CPU likely gave it the edge over the ZBook’s previous-generation CPU and 4GB RTX A2000.

The Precision 7670 continued showing much stronger performance than the ZBook. Only in GeneralOps did the ZBook perform slightly better.

The Precision 7670 led the ZBook in every test. As before, this is likely because of its faster CPU and beefier graphics card.

Another 3D benchmark we will be looking at is LuxMark, an OpenCL GPU benchmarking utility. The Precision 7670 continued its dominant lead over the ZBook.

Next, we look OctaneBench, a benchmarking utility for OctaneRender, which is another 3D renderer with RTX support that is similar to V-Ray. We didn’t run this test on the ZBook Power G8, so only the Precision 7670’s results are shown.

Next up is Blender, an open-source 3D modeling application. This benchmark was run using the Blender Benchmark utility. NVIDIA OptiX was the chosen render method. The score is in samples per minute, with higher being better. Likewise, we only ran this test on the Precision 7670.

We have also started running 7-Zip’s built-in memory benchmark on laptops. This test responds well to faster memory with lower latencies. As we only started running this test recently, the results below are only for the Precision 7670.

The Precision 7670 uniquely brings Dell’s CAMM memory into play. It supports 128GB of memory thanks to that upcoming standard, whereas most 16-inch laptops using SODIMMs only support 64GB. It also offers two or three M.2 Gen 4 storage drives with available RAID and impresses with its aluminum build, 16:10 OLED display, ample port selection, and quality input devices. Overall, the Precision 7670 gets our recommendation for a high-end 16-inch mobile workstation.