In response to the demand for ultra-thin notebook computing, the SSD industry at large has started transitioning to, or at least is offering additional SKUs, focused around the 7mm form factor. Memoright announced the FTM Slim in January, a 7mm client SSD featuring synchronous NAND, SandForce SF-2200 controller and SATA 6 Gb/s interface to deliver a reported 550 MB/s reads and 500 MB/s writes. For small form factor computing, such speeds are welcome, given with miniaturization, we’re used to giving up on performance.

In response to the demand for ultra-thin notebook computing, the SSD industry at large has started transitioning to, or at least is offering additional SKUs, focused around the 7mm form factor. Memoright announced the FTM Slim in January, a 7mm client SSD featuring synchronous NAND, SandForce SF-2200 controller and SATA 6 Gb/s interface to deliver a reported 550 MB/s reads and 500 MB/s writes. For small form factor computing, such speeds are welcome, given with miniaturization, we’re used to giving up on performance.

The FTM Plus Slim builds on Memoright’s portfolio of SSD’s which includes client, enterprise and industrial variations. The FTM Plus Slim, and the more rotund 9.5mm FTM Plus, sit squarely in the mainstream client SSD market. While the focus may be on the client, Memoright has included plenty of their enterprise features with built-in power management features that include voltage-stabilizing circuits which protects the drive from electric irregularities and electrostatic discharge. The FTM Plus also uses this technology to finish drive writes before shutting down due to loss of power.

Memoright offers the FTM Plus and Slim in 60GB, 120GB, 240GB and 480GB capacities. While not generally available in retail, interested parties may contact Memoright directly to find a reseller in their area. 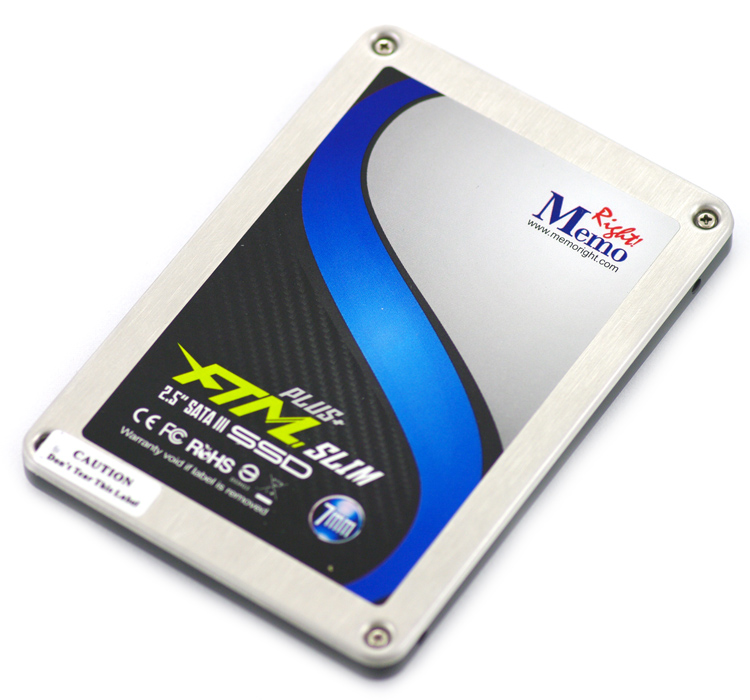 The Memoright FTM Plus Slim uses an all-metal case, featuring a cast alloy body and a stamped metal top cover. Compared to many SSDs on the market that use plastic body segments, this gives the FTM Plus Slim a very solid and rugged feel. Considering that the target market for this slim SSD is made up of thin and lightweight systems which can and will flex under certain circumstances, protecting the drive is an important consideration. 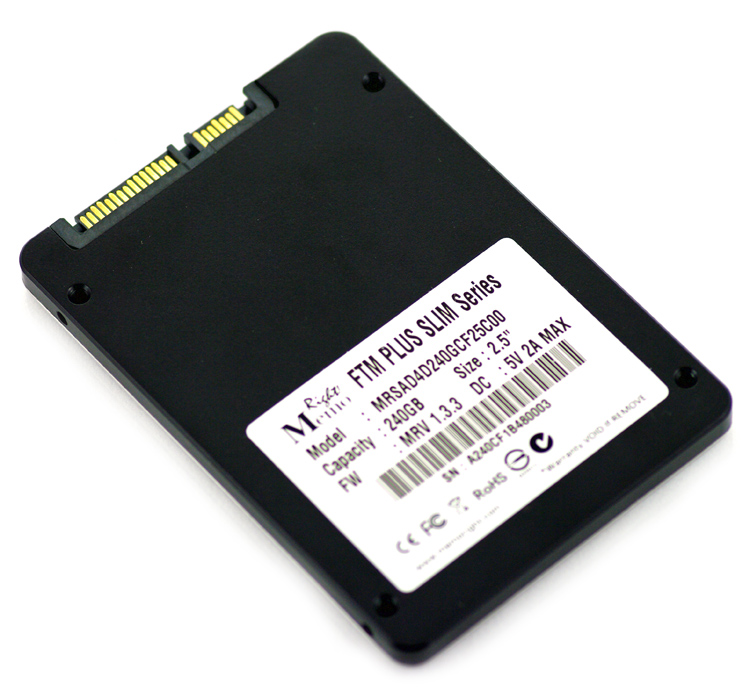 The side profile of the drive shows the smaller 7mm z-height. This size of drive is required for Intel Ultrabooks, and can also be found in many systems on the market today such as the Lenovo ThinkPad X220.

The front of the drive is rather basic, with a standard SATA power and data connection. No service pins are needed for updating the drive, as everything is handled through a software client.

To help users manage their SSD, Memoright includes two software tools. The first is a speed gauge that shows remaining drive life, using SMART data to create a useful SSD-life gauge. The second software package gives users a simple secure erase tool, something that comes in handy from time to time. While not the most robust software package available to SSD owners, it’s something, and more than many manufacturers provide. 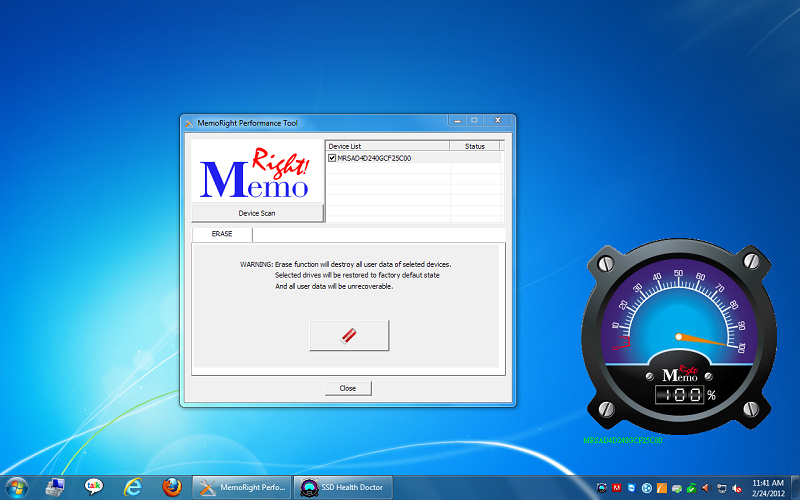 The Memoright FTM Plus Slim is easy to take apart after breaking a warranty voiding sticker. With no user serviceable parts inside, there is no reason a buyer should ever need to open their SSD. The top cover is removed by unscrewing four small Phillips head screws at the corners. With the cover lifted away, you can see the back of the circuit board. To lift the PCB out of the bottom half of the case, you need to remove another five remaining screws that hold it in place.

The heart of the Memoright FTM Plus Slim is a SandForce SF-2281 processor using sixteen 16GB Micron Synchronous NAND pieces for storage. 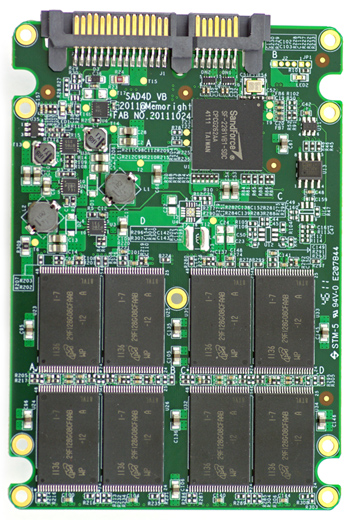 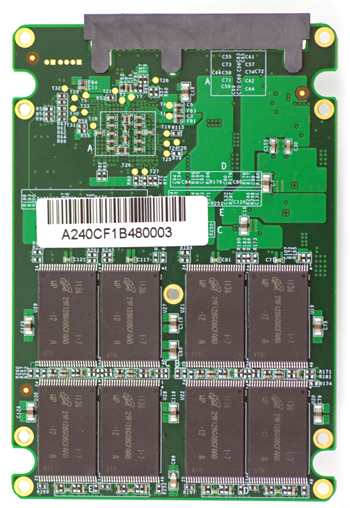 You can also see the beefier power regulation components on the circuit board, which look more at home on an enterprise-grade SSD than they do a consumer product. These should help suppress most power blips incoming to the drive, under under most conditions, especially with a notebook that has its own battery, the drive should never seen to fully utilize.

For the 240GB FTM Plus Slim capacity, Memoright lists a peak read speed of 550MB/s and a write speed of 500MB/s. To put these claims to the test, we used our 2MB sequential transfer test in IOMeter.

The Memoright FTM Plus Slim surprised us off the bat, coming in with faster sequential read and write speeds from both compressible and incompressible data than the Intel SSD 520. 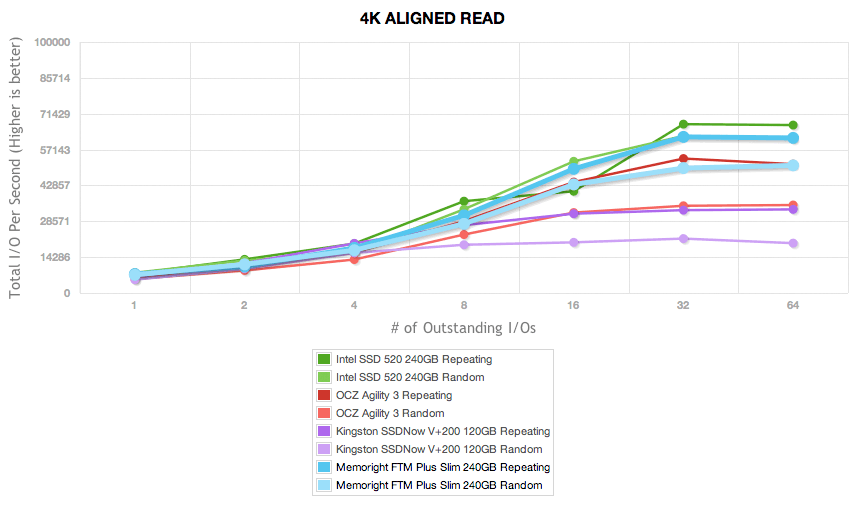 Under a higher load the Memoright FTM Plus Slim started to slip against the Intel SSD 520 at higher queue depths. 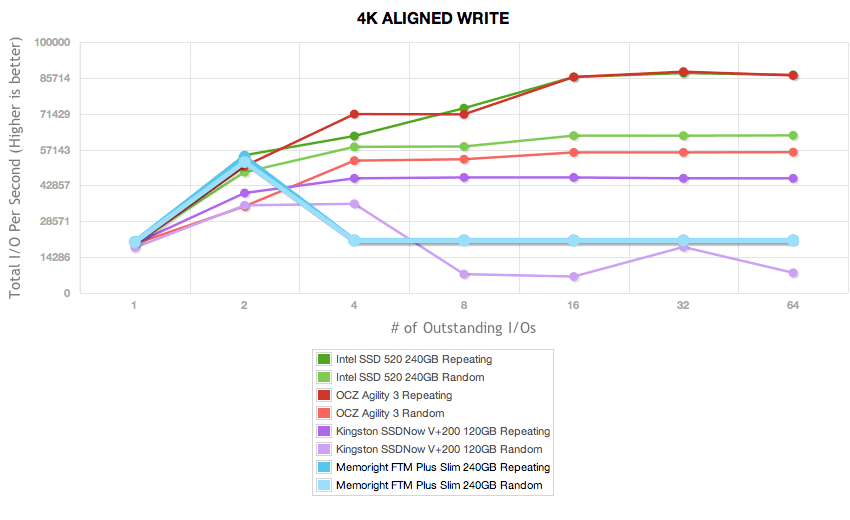 Under short 4K write workload used to measure the speed in 30 second intervals for each new queue depth, the FTM Plus Slim spiked at 54,000 IOPS and then leveled off at 21,000 IOPS for the remaining duration of the test.

In our 4K write latency test, which measures access times at a queue depth of 1, the Memoright FTM Plus Slim scored well with average response times of 0.0487ms with incompressible data and 0.0491ms with compressible data. Peak latency times were also very good, measuring 34.14ms and 34.22ms for randomized and repeating respectively. 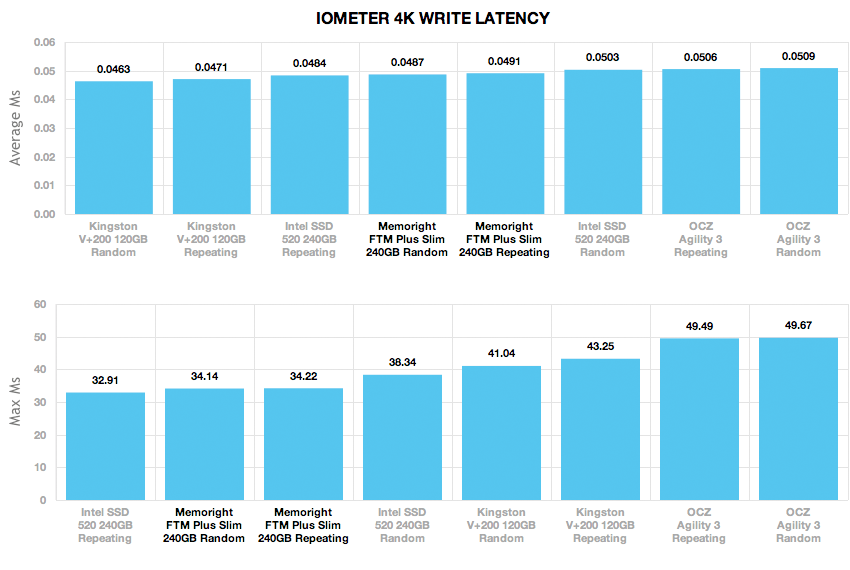 Using CrystalDiskMark with randomized data, we noted similar read and write speeds as what we found with our incompressible IOMeter testing. 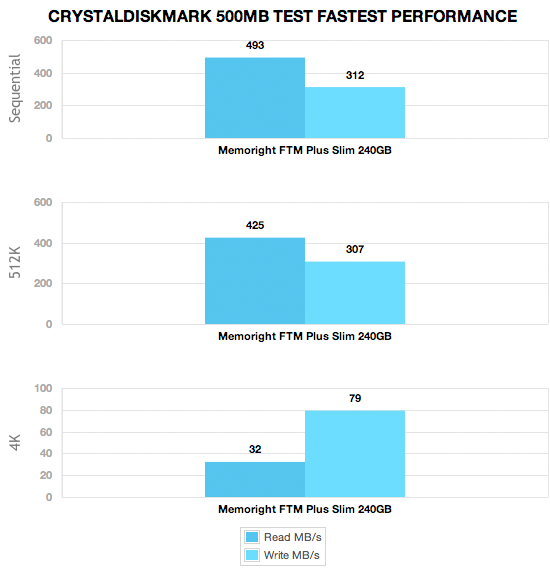 Our last group of consumer IOMeter synthetic benchmarks looks at mixed-load server profiles including Database, Workstation, File Server, and Webserver. In this group the Memoright FTM Plus Slim performed very well, only being outpaced by the Intel SSD 520 at higher queue depths. 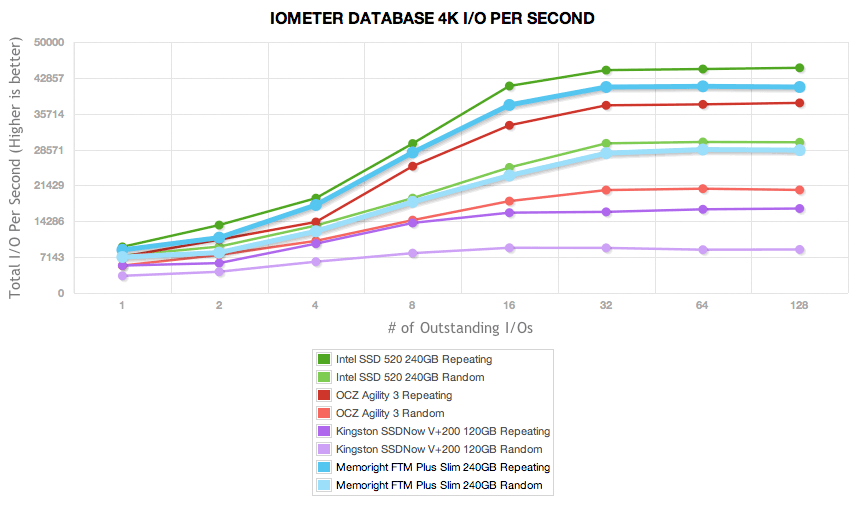 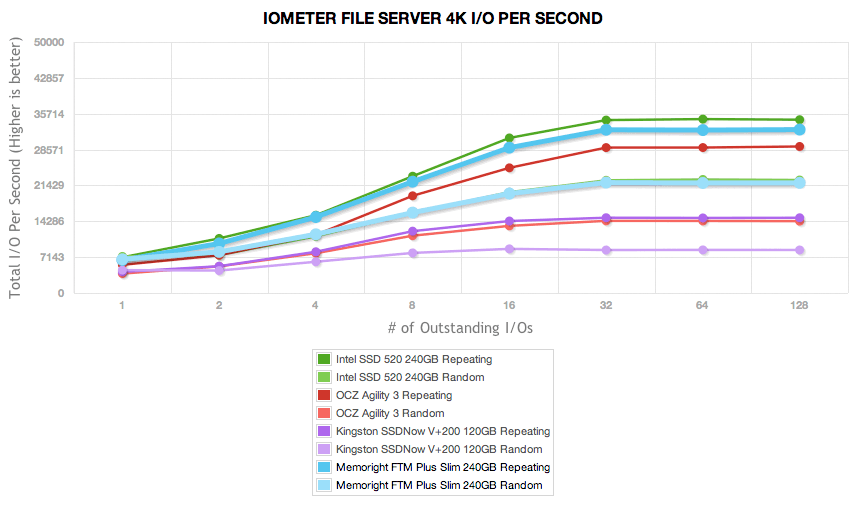 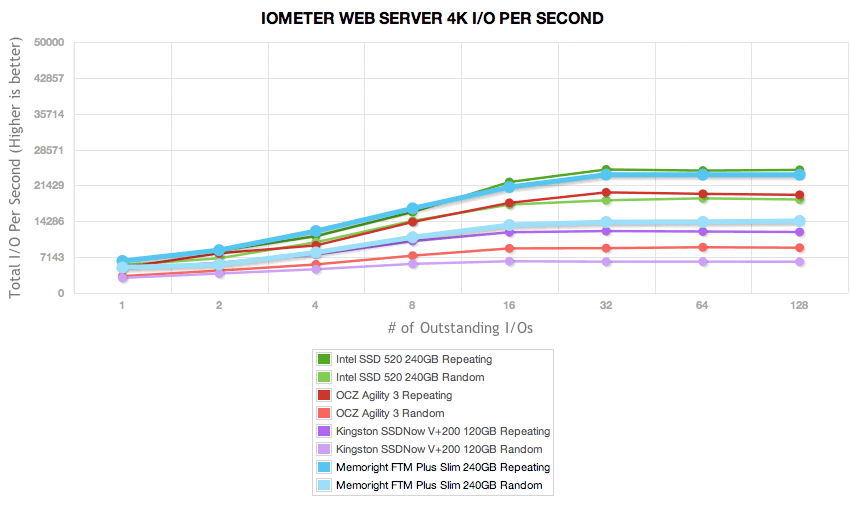 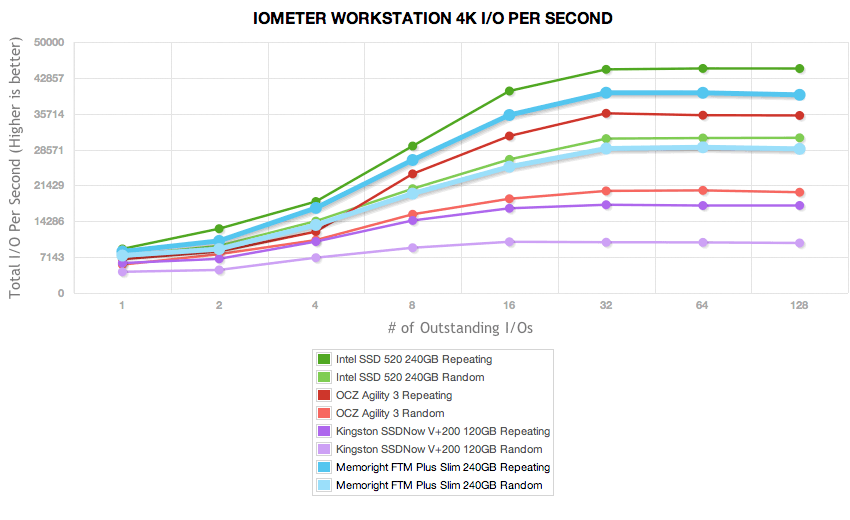 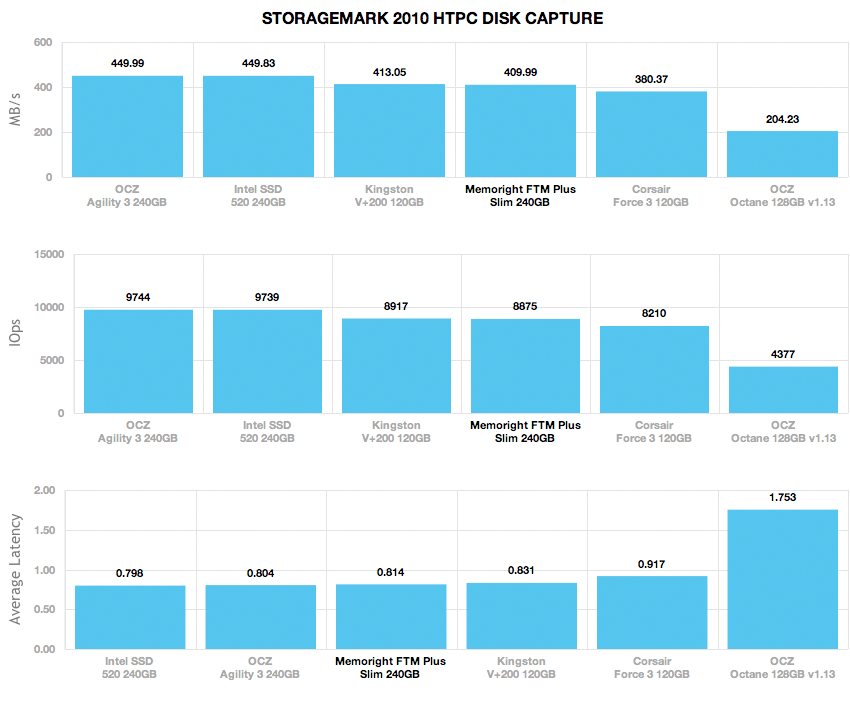 In our HTPC scenario the Memoright FTM Plus Slim measured an average speed of 410MB/s ove the duration of our trace, compared to 449MB/s from the Intel SSD 520 and OCZ Agility 3. 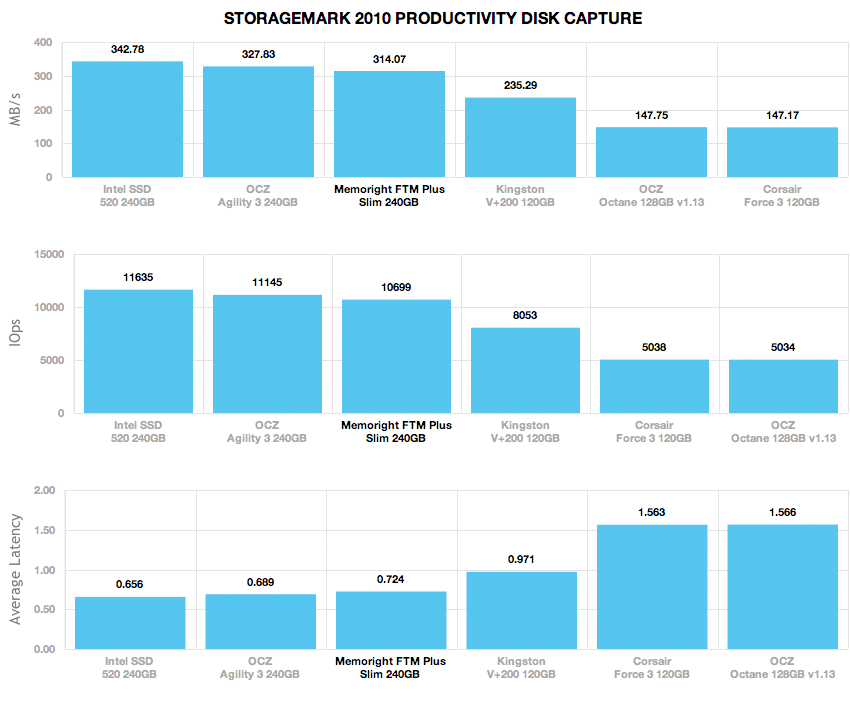 In our productivity trace the FTM Plus Slim measured 314MB/s average, compared to 342MB/s from the Intel SSD 520 or 327MB/s from the OCZ Agility 3. 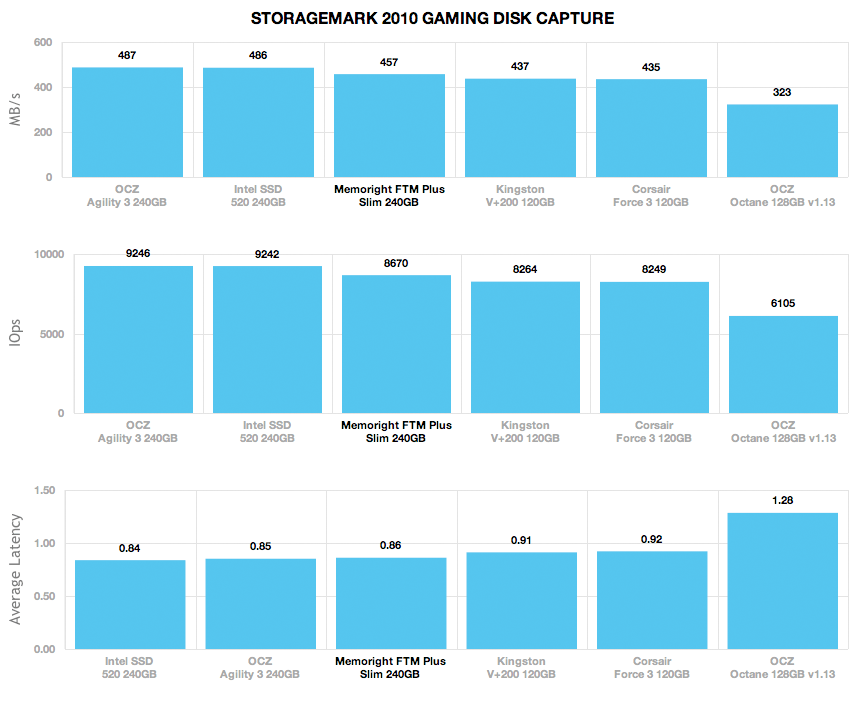 In the read-heavy Gaming trace the Memoright FTM Plus Slim measured an average speed of 457MB/s over the duration of the test.

For a mainstream SandForce SSD, the Memoright FTM Plus Slim did well across the board. In some cases it actually bested the Intel 520, which previously reigned supreme with the Vertex 3 Max IOPS in most of our benchmarks. The FTM Plus posted industry leading scores in our 2MB and 4K random and repeating tests with repeating data. The FTM Plus Slim also performed well in our traces, although not as chart smashing as it did in our synthetic benchmarks. On the power front, measurements came in light with the drive sipping only 0.65 watts at idle, great for its Ultrabook target market.

The FTM Plus Slim gave back some of those gains when it comes to sustained random writes, falling well behind other same-capacity SandForce drives in the 4K random write tests where performance leveled off at 21,000 IOPS a minute after the test began. For a short period of time, it did burst up to 54,000 IOPS though.

While billed as a client drive, it’s most likely that the FTM Plus Slim will find use inside workstations within the enterprise. With Memoright’s additional power protection, users with critical data that demand high integrity can feel good about the drive’s behavior with odd power fluxuations or in the event of unexpected shutdown. For extreme computing, there’s even a waterproof option, great for those submersible scientific types. Overall in the 7mm tall SSD market, the Memoright FTM Plus Slim packs a lot of punch in a small package.

The Memoright FTM Plus Slim offers very good performance in a client drive, while coupling power management features that are generally only seen in enterprise grade SSDs. The net result is a drive that should excel in workstation uses and other light enterprise duty.