Late last year, NETGEAR rolled out its new Orbi Pro WiFi 6 tri-band mesh router system. While it may not have been the first, the original Orbi made a big splash years back with its satellites that expanded coverage. This was seen as an innovative way for businesses (as well as home users) to add WiFi throughout without hard wiring in access points. WiFi needs have increased with more and more IoT devices and NETGEAR has responded with the release of the Orbi Pro WiFi 6.

Late last year, NETGEAR rolled out its new Orbi Pro WiFi 6 tri-band mesh router system. While it may not have been the first, the original Orbi made a big splash years back with its satellites that expanded coverage. This was seen as an innovative way for businesses (as well as home users) to add WiFi throughout without hard wiring in access points. WiFi needs have increased with more and more IoT devices and NETGEAR has responded with the release of the Orbi Pro WiFi 6. 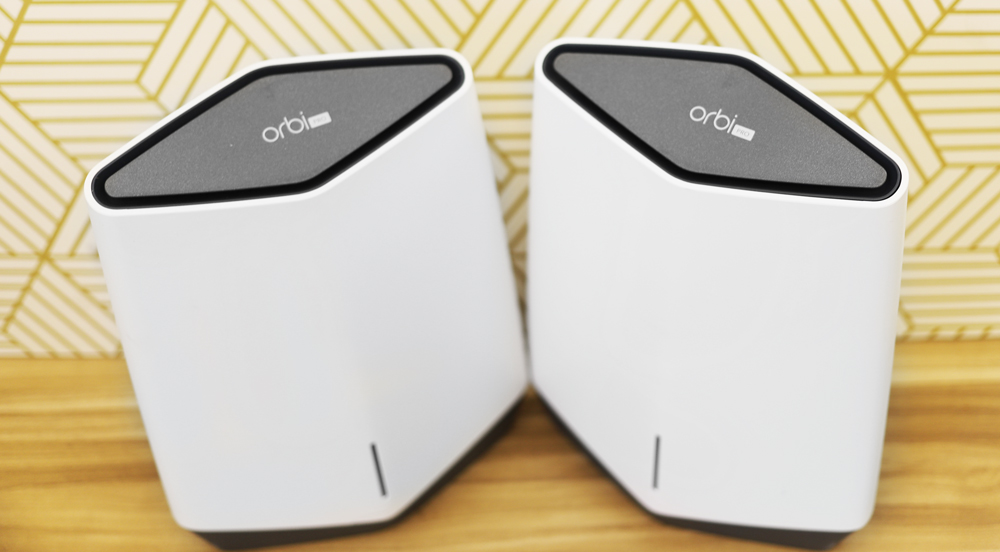 What Does Orbi Pro WiFi 6 Bring To The Table?

Let’s touch on WiFi 6 first. According to the company, WiFi 6 100% faster though this is based on theoretical throughput. Actual speeds of devices can vary wildly for a multitude of reasons. The company claims that WiFi 6 does allow up to four times as many devices connected to the same network as WiFi 5. This is becoming more and more important as smart devices are finding their way into every aspect of our lives both at home and at work. WiFi 6 offers lower latency and is said to improve the battery life of compatible devices. One of the more important aspects is that WiFi 6 is backward compatible with WiFi 5 devices. No need to keep an old network or upgrade to newer devices right away.

Now let’s tie this in with the new Orbi. The mesh coverage nature of the Orbi Pro WiFi 6 expands coverage and eliminates dead zones. When employees and customers are in a business leveraging the network, this will prevent them from dropping connection as they move away from the router. The new Orbi comes with a 2.5Gbps Ethernet port for multi-gig connectivity. NETGEAR also talks about security which matters a lot in a shared WiFi area. This security is achieved through separate networks and clients with VLAN-SSID tie-in.

Aside from the above, the Orbi is known to be able to set up and manage very easily. I set up my home Orbi four years ago in just a matter of minutes. The Orbi Pro WiFi 6 is managed through NETGEAR Insight and we’ll get more into that later on.

Right off the bat, we see a couple of issues. For one, they are using theoretical speed numbers instead of real numbers they’ve gotten through testing. Though we see this from time to time, it is not something one would expect from a larger vendor like NETGEAR. Another issue is the claim of four times as many devices covered, but not in reference to what. A little deeper digging led us to a bit less vague 100+ devices. The 2.5Gbps port on the router is for WAN only, providing faster Internet Speed but losing out on the faster-wired connection to things like some of the modern NAS that support 2.5. Two 2.5G ports base station/satellite would have solved that issue.

The price is also a bit of an issue. The MSRP for the router and one satellite is $770. Compared to something like the eero Pro 6 that is $600 for a base station and two satellites. However, the Orbi Pro 6 covers the same square footage and makes more security claims. The Orbi Pro 6 also offers more ports.

The Orbi Pro WiFi 6 can be picked up today for $630 for the router and one satellite.

The overall build and design are similar to the WiFi 5 version. It is still a bit bulky which was a complaint the first go around. In a business environment, this is less of an issue. The Router and satellite are very similar in design still, in fact, they are a bit harder to tell apart than the previous version. The devices are a bit more angled and not as soft, with the indicator lights in the front. Size-wise they are fairly large and require standalone placement, where other flat designs may get away with stacking or staying more discrete in placement. 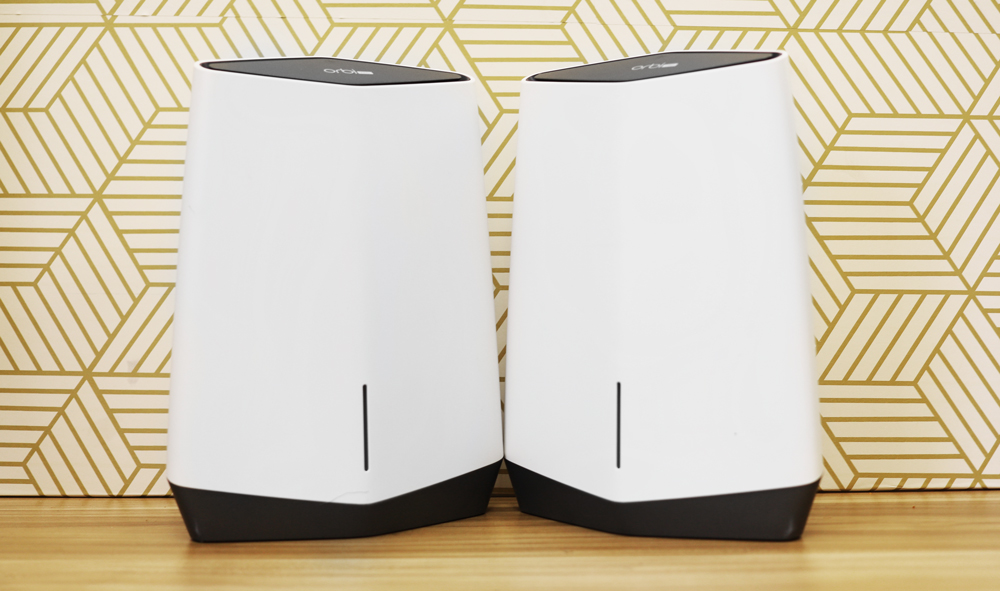 Flipping them around to the back is where one can clearly see a difference… if one looks close enough. On the router, there is a yellow mark on the 2.5Gbps port for where one would connect their Internet into the router. Aside from that, there are four other ports, five on the satellite, then a reset button, and a power outlet. 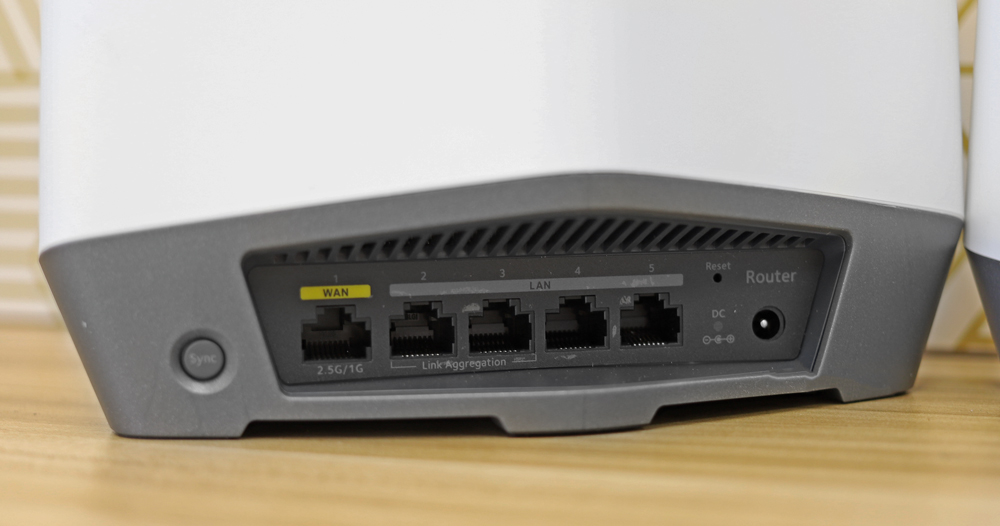 The indicator light on the front is a big improvement in my opinion as I don’t have to stand over the Orbi and look into it to see what is wrong. The previous pro version was fine if it was dark, but in my house, all the WiFi issues happen during the day, when everyone is doing something on the internet. Still the same color pattern: White pulse while syncing, Blue when good, Amber when satellite connection is not as strong as it could be, and Magenta when something is wrong.

The initial Orbi I set up was stupid easy, this time around it was stupid, or maybe I was stupid. Instead of the Orbi app, the Orbi Pro WiFi 6 uses the NETGEAR Insight app, which makes sense as this is geared toward SMB and would use management for SMB and up. This app can be downloaded from the Apple App Store or Google Play. Once downloaded, you need to sign in to your NETGEAR account or set one up if you don’t have one. So far so good.

The router needs to be plugged into both power and internet in the yellow port. From here, you can either scan the network with the App or just pick up the router and scan the QR code on the bottom. First try, no luck, but this isn’t abnormal with anything that has a QR code.

The second attempt connected the router. From here you need to flip the router up again and get the temporary WiFi username and password written on the bottom and set up the WiFi.

After that setup of the router is complete and you need to add a satellite. This is where there was a bit more of a struggle with the setup. So far we are about 5 minutes into getting it ready. I placed the router downstairs in our conference room and the satellite in the upstairs lab. This should have been the recommended 15 feet (4.5 meters) apart. The router could not connect. I disconnected the power to the satellite and tried again, still nada. Next was a reset of the satellite with still no luck. Thinking I may be too close to the router and misjudging the distance through the floor, I moved the satellite farther away, under our Social Media Manager’s desk so she can stub her toe on it. Still, it didn’t want to connect. After cursing the WiFi gods, I saw that the router needed a firmware update. I clicked on this.

Immediately it wanted me to be sure that I wanted to update, yes, I was.

I checked a few times to see how long this would take, but other things came up and I stopped looking only to discover about 30 minutes later that it had finished the update and had found the satellite and integrated it into its coverage. It would probably be best if there is a firmware update available, to just do it and save yourself some time and frustration.

From here you can rename your network and change your password, add VLANs, set up a guest network, an employee network, and an IoT network. You can also do things like filter content and see how many devices are connected to your network(s).

The NETGEAR Orbi Pro WiFi 6 is a tri-band mesh router system. Users can add satellites to expand coverage throughout their business without hardwiring access points. The new Orbi offers WiFi 6 coverage with faster speeds and more devices being able to be connected. On top of that, the router has four 1GbE ports (unfortunately you lose the 2.5GbE port to the Internet only on the base station) and the satellites have one 2.5GbE port and four 1GbE ports giving you a hardwired experience away from the main router. The ability to set up multiple networks and VLANs adds to the network’s overall strength.

The setup was a bit harder than it should have been but overall, not that difficult. From the cost perspective, this unit is expensive compared to other units that do similar work. Unless the business is all about the simple rollout of a WiFi network, there is the router access point angle that can be used for around the same price. The claims on speed and the devices that can be connected are a bit bombastic. On the one hand, it is hard for NETGEAR to say you can hit a certain speed as there are variables beyond their control in the setup, but surely they know the upper limit of devices that can connect.

If simplicity and security is your top concern setting up the business network, Orbi Pro WiFi 6 tri-band mesh router system is the right choice. If cost is a concern there are several other options that do more or less the same on the network side of things at lower costs.

LucidLink Filespaces: How it Works