The Netgear ReadyNAS line of SOHO and small business NAS systems offers a robust set of management features, recently enhanced by Netgear’s video surveillance offering. The surveillance feature can be enabled via license on current ReadyNAS units, or can be bought in a package complete with ReadyNAS, networking gear and IP video cameras. The system supports up tp 16 cameras per ReadyNAS and provides the end user with web-based management and monitoring tools, along with tools for remote and mobile monitoring via iOS, Android and BlackBerry devices.

The Netgear ReadyNAS line of SOHO and small business NAS systems offers a robust set of management features, recently enhanced by Netgear’s video surveillance offering. The surveillance feature can be enabled via license on current ReadyNAS units, or can be bought in a package complete with ReadyNAS, networking gear and IP video cameras. The system supports up tp 16 cameras per ReadyNAS and provides the end user with web-based management and monitoring tools, along with tools for remote and mobile monitoring via iOS, Android and BlackBerry devices. 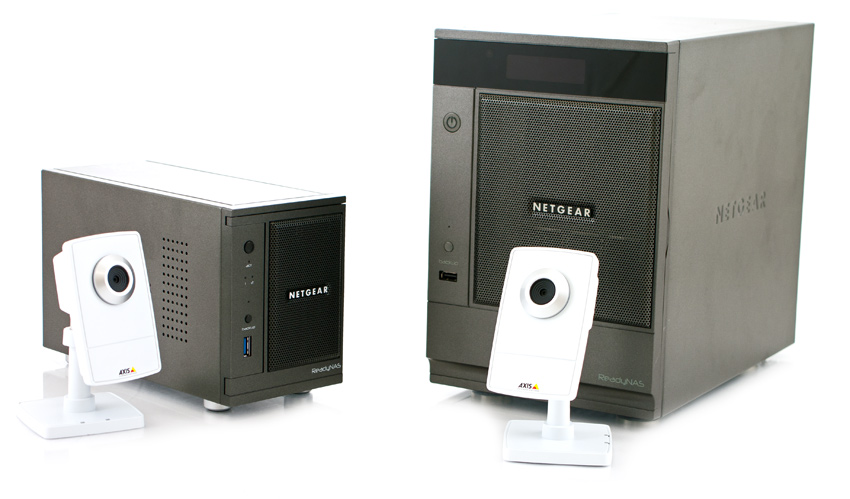 For businesses looking to add video surveillance for compliance, security or other legal reasons, the NAS and video camera combination provides a pretty compelling value proposition. Long gone are the days of VCR video banks; with large hard drives and smarter video management techniques, it’s reasonable to keep quite a few active camera streams saved to disk, moving to an archive storage array for long term storage. The key is simplicity, most small businesses don’t have the time or technical expertise to manage complicated systems, nor do they have budget for proprietary video-only systems. Those reasons make the ReadyNAS an interesting choice then, as setup, configuration and ongoing management are relatively simple.

Netgear offers the video surveillance licenses in packages of one, two or four with suggested pricing of $95, $170 and $300 respectively. Our review consists of a ReadyNAS, Netgear switching, twp Axis M1011-W cameras and two video camera surveillance license.

The overall setup of the security camera environment is pretty easy to get going and depending on the cameras chosen, the installation can be very creative. Netgear supplied us with two Axis M1011-W cameras in our review kit support wireless connectivity, although not PoE. This means while the installation doesn’t need a wired network connection routed to it, you still need an AC power connection. In our building we currently use Netgear equipment for our wireless and wired Ethernet backend. The equipment used in this review to support the ReadyNAS Surveillance kit include the Netgear ProSafe WNDAP660 Access Point as well as the ProSafe Plus JGS524E 24-port 1GbE switch. 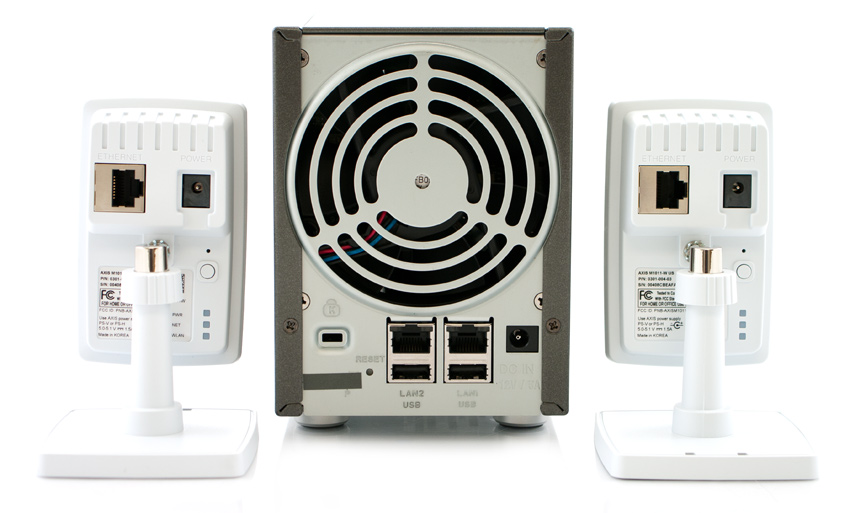 Out of the box users need to attach each camera to the network with a wired connection for setup. The camera is assigned an IP by your DHCP server, and from there you can access an on-board web server for configuration. One handy feature of the Axis M1011-W camera is it clones its wired MAC address to the wireless device, so you can easily assign a static IP while its plugged in, which later gets assigned to the wireless device when it attaches to your network. Once each camera was visible on our building network, we switched gears to the Netgear ReadyNAS environment. 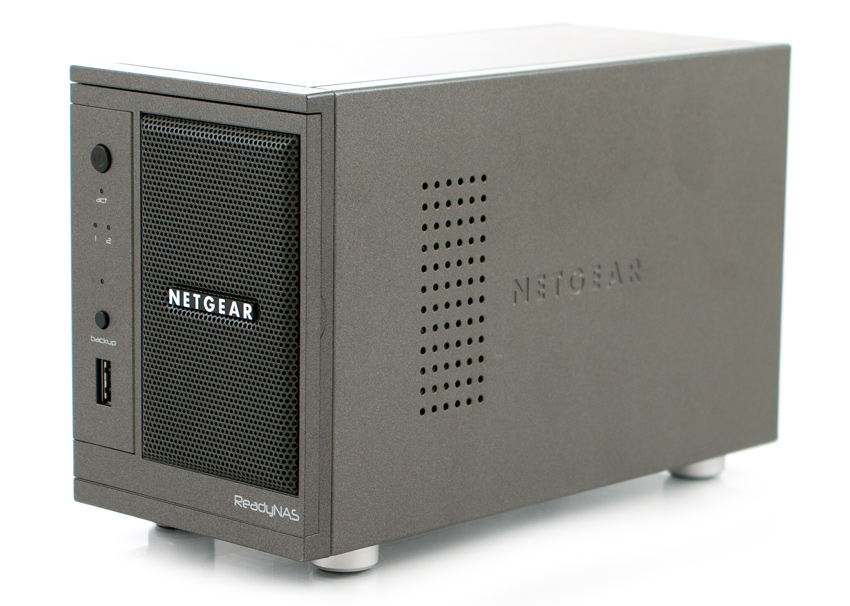 As an add-on package for all ReadyNAS products, Netgear offers the ReadyNAS Surveillance package. Netgear supplied us with a 2-bay ReadyNAS Ultra 2 Plus, although the software is designed for any ReadyNAS system. This software installs with a single file and then stays running in the background on the NAS to record from and manage security cameras on your network. 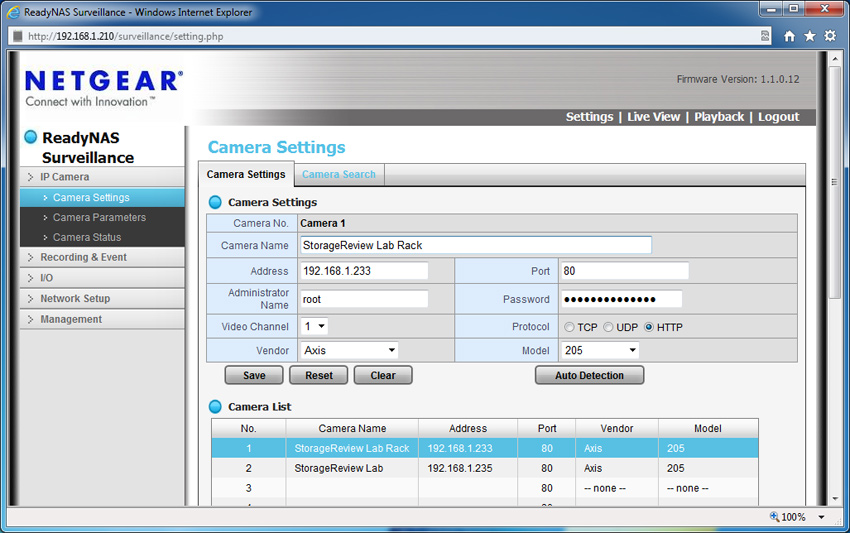 The setup in this stage is also very easy, with the first step including finding your wireless (or wired) network camera, entering its credentials, and telling the ReadyNAS what IP address it has. With that information as well as knowing the camera vendor, the Surveillance package handles the rest of the configuration and immediately allows streaming and recording from the cameras.

Using the Netgear ReadyNAS Surveillance on a day to day basis, we positioned the two wireless cameras in our Enterprise Test Lab. With one camera aimed at our two 42U Eaton S-Series racks and one on our test bench, we were able to record activity taking place through motion activation. The camera interface can be accessed in multiple ways, including an web browser, an iOS client for both iPhone and iPad, as well as a Windows client. 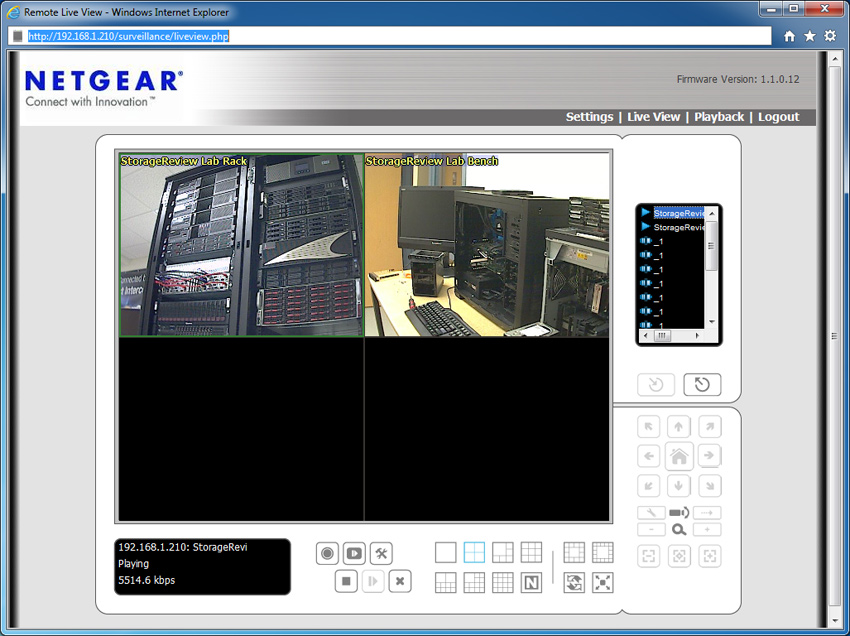 The software is geared to interface with multiple cameras with easy monitoring of multiple camera streams at the same time. Depending on the activity taking place, you can select a single feed to watch, or select a wide range of viewing configurations. The interface also supports advanced camera features such as pan, tilt, and zoom for camera models that support it. Netgear also offers an iOS app for both iPhones and iPads which allows viewing of live camera feeds. This level of mobility is one of the benefits of an IP-based system, where you don’t need to be tied to one physical location to view the camera feeds. 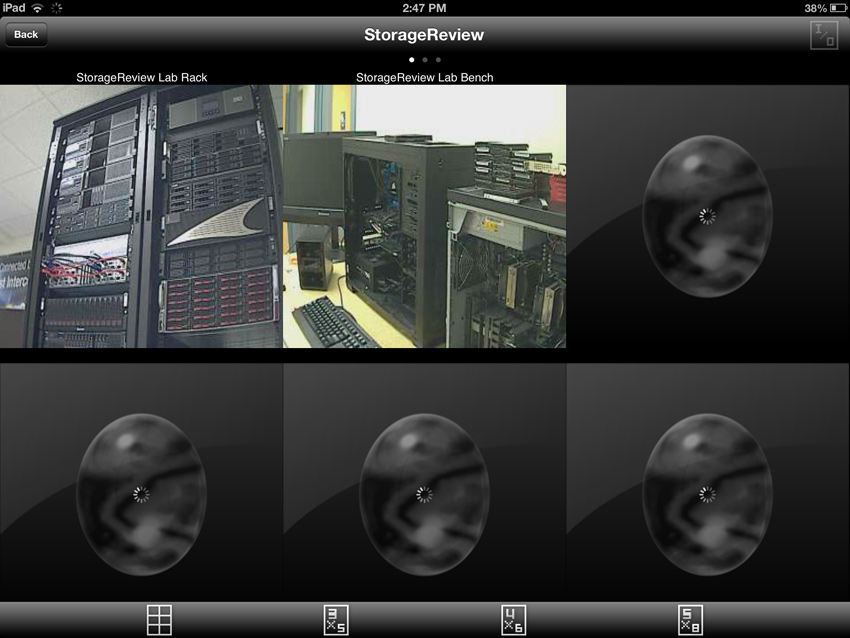 One of the main benefits of bringing together IP cameras and a NAS storage device such as the Netgear ReadyNAS is the large on-board storage to record video. This means business no longer need to cycle through tapes on a daily basis and data retention and backup is simplified using normal utilities. The ReadyNAS Surveillance package allows viewing of live streams, but also works in the background to record video on all cameras connected. Depending on requirements, the software allows constant recording, recording via schedule, or just recording when motion is detected. In our lab we used the latter option, recording when movement takes place in the camera’s field of view near our server racks or near our test bench. Captured below is the activity during the installation of our Eaton 9PX UPS which we recently reviewed. 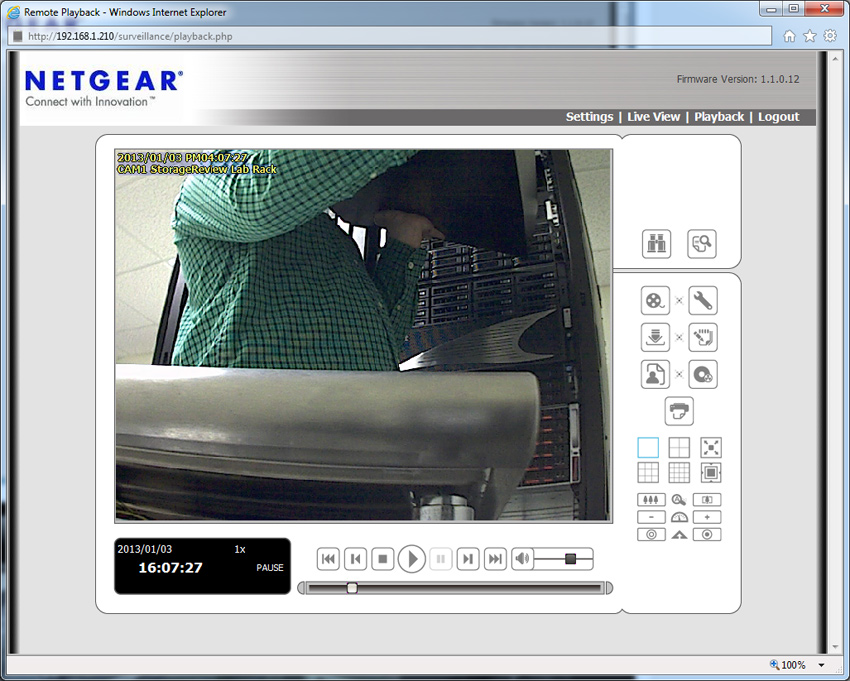 Video surveillance is an increasingly popular feature that’s being bundled with NAS units for good reason. In this case at least the configuration is simple and the interface is easy to use be it at the PC, iPad or other device. With the wireless Axis IP cameras we were online in minutes, something that’s important to many small businesses and even home users who are contemplating adding video for security or compliance reasons. The Netgear ReadyNAS platform is also compatible with over 1,000 different cameras, giving users a ton of choice to select the right cameras for the job – be it wireless units like the Axis cameras we tested with, or something that support power over Ethernet or some other specialized use case.

The software interface got the job done and by supporting viewing and playback over a standard web browser, users don’t need to worry about setting up individual systems just to access the camera feeds. For buyers interested in mobility, Netgear’s ReadyNAS Surveillance iOS app worked very well in our use, easily streaming the feeds from our different camera locations. Compared to traditional systems that require a central viewing point that all the cameras feed into, going virtual removes that constraint and makes things much more flexible.

The Netgear ReadyNAS surveillance add-on provides easy setup and use of up to 16 video cameras per system. For organizations who need video coverage for whatever reason, the Netgear solution is a breeze to deploy and compatible with most IP cameras on the market today.