OCZ continues its trend to build on past acquisitions of innovative controller technology, system-on-chip talent, and storage IP portfolios with the new Vector 150 SSD series launch, designed specifically for the enthusiast. With OCZ’s new ultra-thin 2.5-inch 7mm form factor SSD line, it can fit into virtually any notebook. It also features next generation 19nm MLC NAND flash, proprietary in-house OCZ built controller and firmware designed for superior mixed workload performance, and increased write endurance and reliability due to its advanced suite of flash management tools. OCZ’s Vector 150 SSD line brings burst sequential reads and writes of 550MB/s and 530MB/s to the table, along with random read and write IOPS of 95,000 and 90,000 respectively which is pretty much in line with the quoted performance of the prior-gen Vector. Additionally, it comes bundled with a 3.5” adapter as well as Acronis Cloning Software.

OCZ continues its trend to build on past acquisitions of innovative controller technology, system-on-chip talent, and storage IP portfolios with the new Vector 150 SSD series launch, designed specifically for the enthusiast. With OCZ’s new ultra-thin 2.5-inch 7mm form factor SSD line, it can fit into virtually any notebook. It also features next generation 19nm MLC NAND flash, proprietary in-house OCZ built controller and firmware designed for superior mixed workload performance, and increased write endurance and reliability due to its advanced suite of flash management tools. OCZ’s Vector 150 SSD line brings burst sequential reads and writes of 550MB/s and 530MB/s to the table, along with random read and write IOPS of 95,000 and 90,000 respectively which is pretty much in line with the quoted performance of the prior-gen Vector. Additionally, it comes bundled with a 3.5” adapter as well as Acronis Cloning Software.

In the past, OCZ has oscillated between controllers using SandForce with Vertex 2, 3 and 3.20 and a Marvell controller with Vertex 4. However in 2011, OCZ started to take a hold of their own destiny by acquiring Indilinx as well as some of PLX’s design team. These investments have certainly paid off as the teams brought with them the Barefoot 3 controller and firmware in addition to other valuable storage-centric IP. OCZ was able to implement their first in-house controller into the OCZ Vector using a specially designed Barefoot 3 M00 (BF3-M00). OCZ is again utilizing their own Barefoot 3 M00 controller and firmware in the OCZ Vector 150 Series. Not only does this allow OCZ greater control over pricing, but also performance, and improved reliability and support.

OCZ includes cloning software in the package, along with a 3.5″ mounting bracket for desktop users. The Vector 150 carries a five-year warranty, which matches other high-end SSDs. From an endurance perspective, the drive supports an impressive 91TB of writes over the five-year window, 2.5X more than the previous Vector SSD. The new drive also supports AES-256 encryption, where the original Vector did not.

The Vector 150 uses virtually the same enclosure as its predecessor, from the 7mm form factor to the quality of components used. The only difference is that it adds the 150 branding to the Vector logo located on the top of the enclosure. This form factor will soon be the norm as ultraportable computing demands smaller storage components. 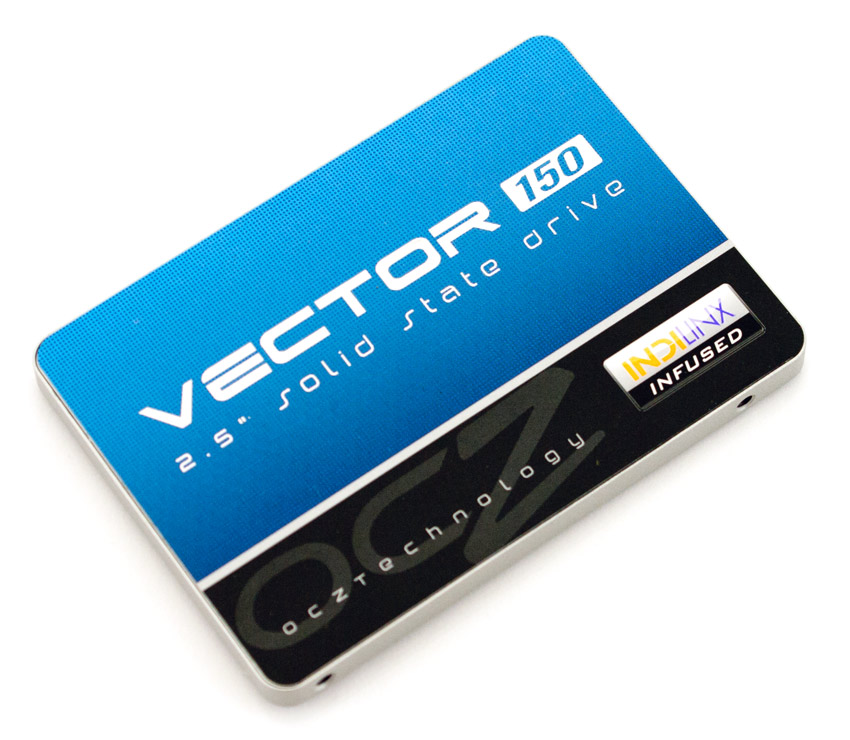 The casing itself is high quality and designed to shed heat into the host system with it’s a sleek, all-metal alloy design. The thermal benefits to this type of enclosure can aid drive longevity and the impressive design can help differentiate in such a competitive market. 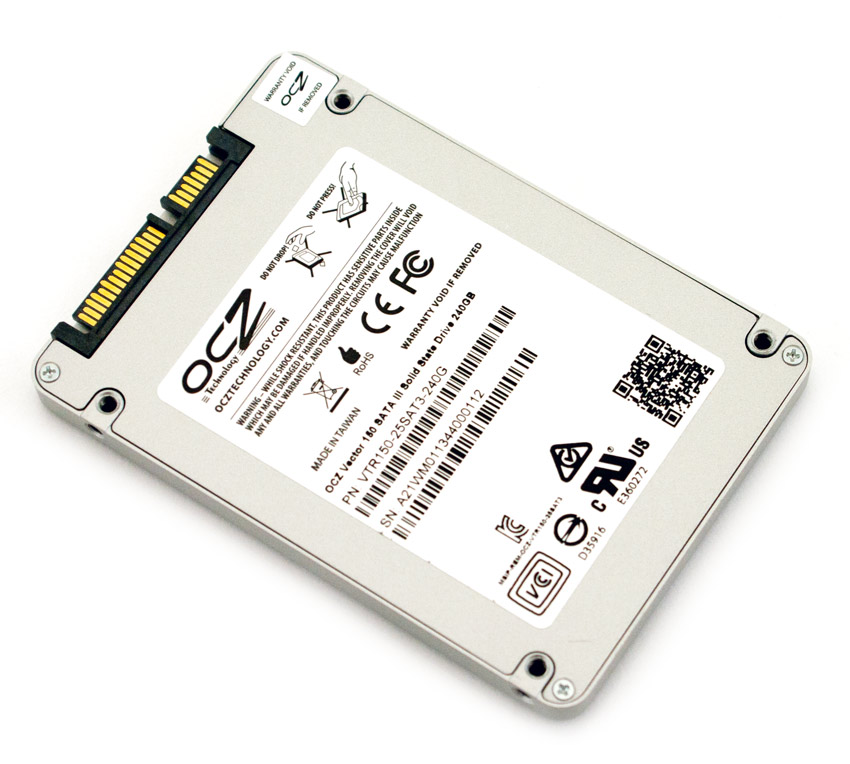 With its 7mm 2.5-inch form-factor, the OCZ Vector 150 can be installed in virtually any platform; from an ultraportable notebook to even embedded solutions and flash arrays that utilize consumer SSDs. The front of the SSD has a standard SATA power and data interface, with all service and firmware upgrade functions handled through the OCZ Toolbox. 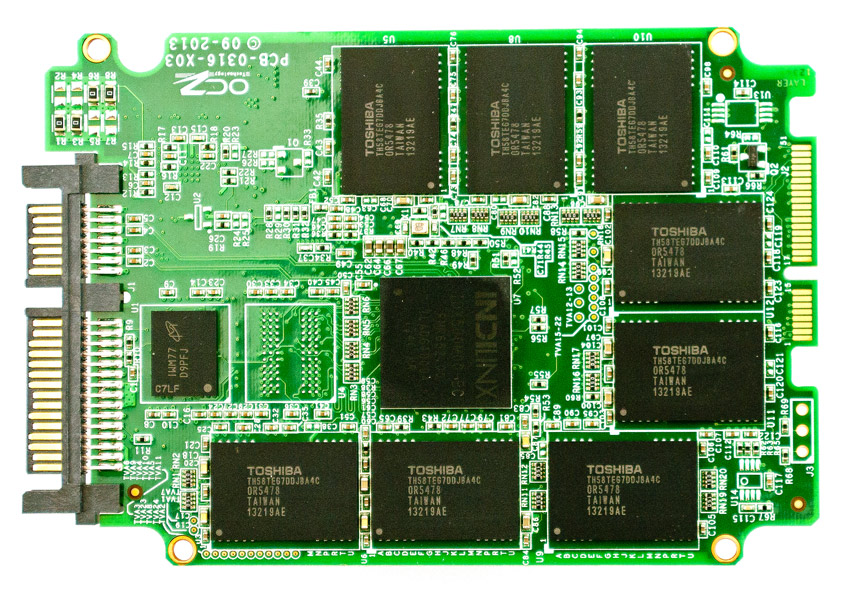 To open, simply remove the four small Phillips head screws from the four corners of the bottom cover. Next, carefully pry up the cover, which is held on partially by a thermal pad OCZ uses to dissipate heat off of the controller into the body of the case. With the cover removed, you can see the OCZ Indilinx Barefoot 3 controller at the heart of the Vector 150 SSD. 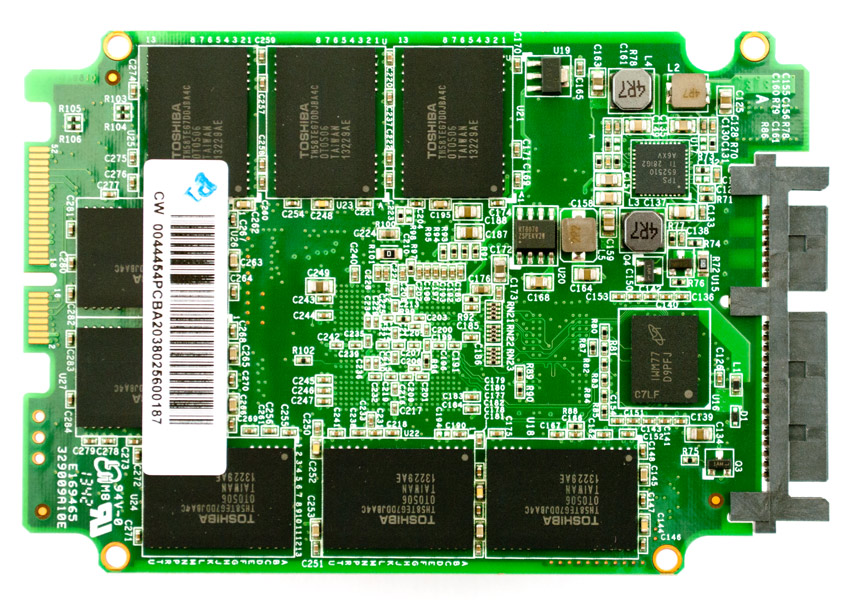 The 240GB OCZ Vector utilizes sixteen pieces of Toshiba 16GB MLC NAND, which is divided between the top and bottom sides of the circuit board.

Switching to smaller 4K random transfers, the Vector 150 240GB measured 6,128 IOPS read activity and 20,671 IOPS write activity, which ranked last and upper middle of the pack respectively. Its 120GB brethren performed better, especially in the write column where it scored a blistering 20,812 IOPS, which was the fastest write speed. 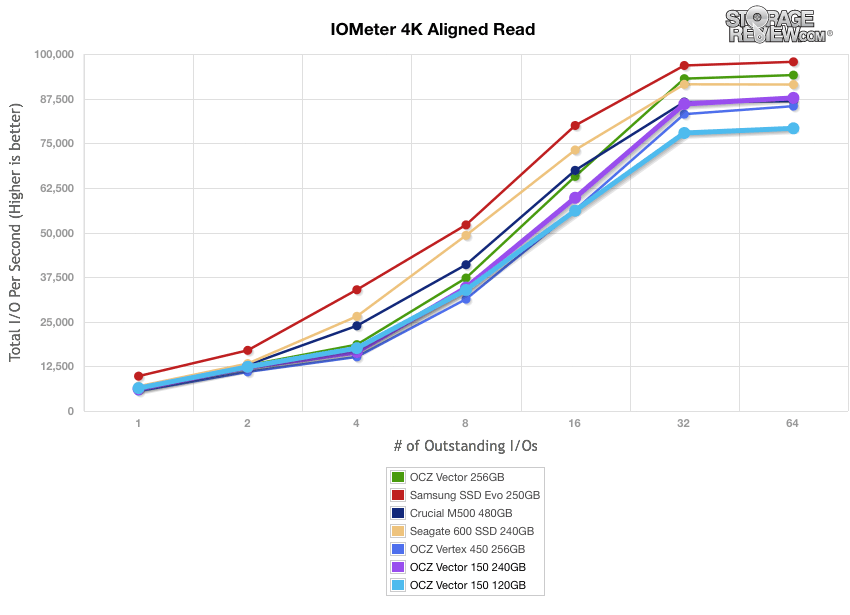 Shifting focus to write activity, the Vector 150 240GB still couldn’t out-perform the 120GB model, but still ranked towards the upper middle of the pack measuring 20,530 IOPS at QD1 and peaking at just over 82,406 IOPS at QD64. 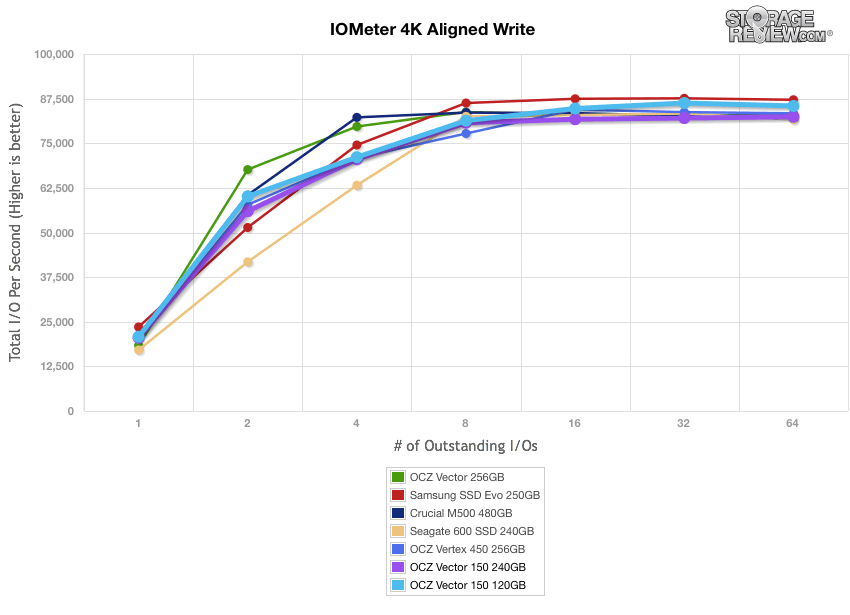 Comparing average write latency between each mainstream consumer SSD, the Vector 150 ranked at the top of the pack with a time of 0.048ms but with an ultra-high peak latency of 332.39ms. 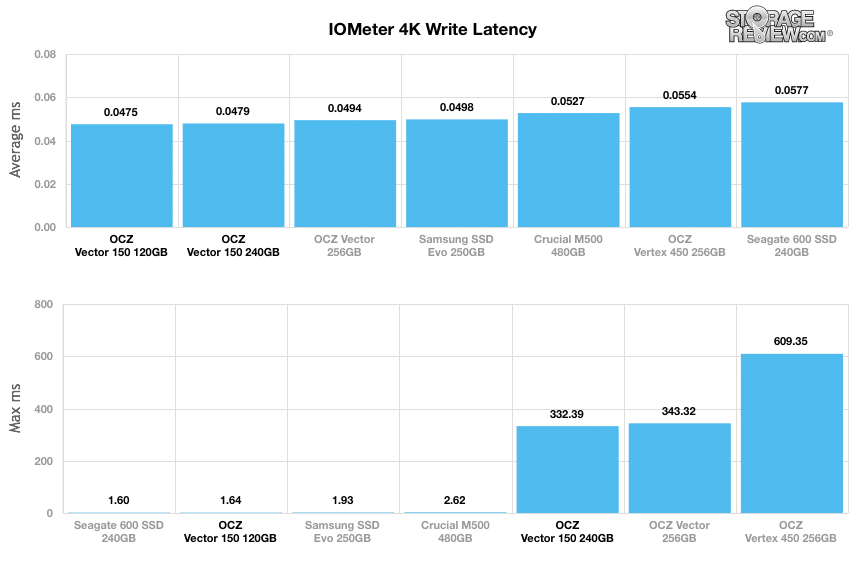 Our last series of synthetic benchmarks compare the hard drives in a series of server mixed-workloads with a queue depth of ranging from 1 to 128. Each of our server profile tests has a strong preference towards read activity, ranging from 67% read with our database profile to 100% read in our web server profile. In all of our mixed workloads, the Vector 150 240GB ranked near the top of the pack with the exception of the web server profile, this time outperforming the 120GB model in every category.

The first is our database profile; with a 67% read and 33% write workload mix primarily centered on 8K transfer sizes. In the test, the Vector 150 240GB outperformed all of the drives in the terminal by Q128, though it did perform at the lower end of the pack in Q1. 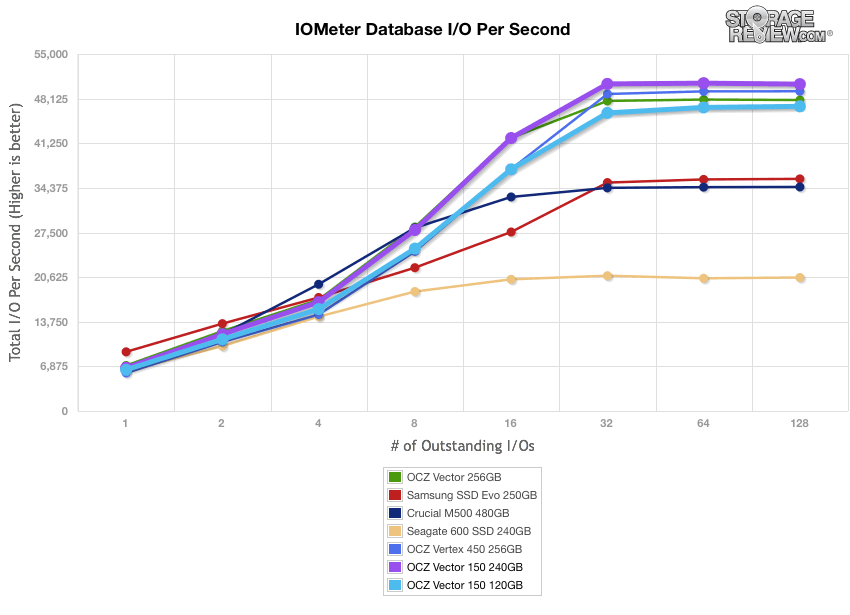 The next profile looks at a file server, with 80% read and 20% write workload spread out over multiple transfer sizes ranging from 512-byte to 64KB. The Vector 150 240GB delivered QD1 throughput near the middle of the pack but made its way to the top by Q128, only trailing the Vector 256GB. 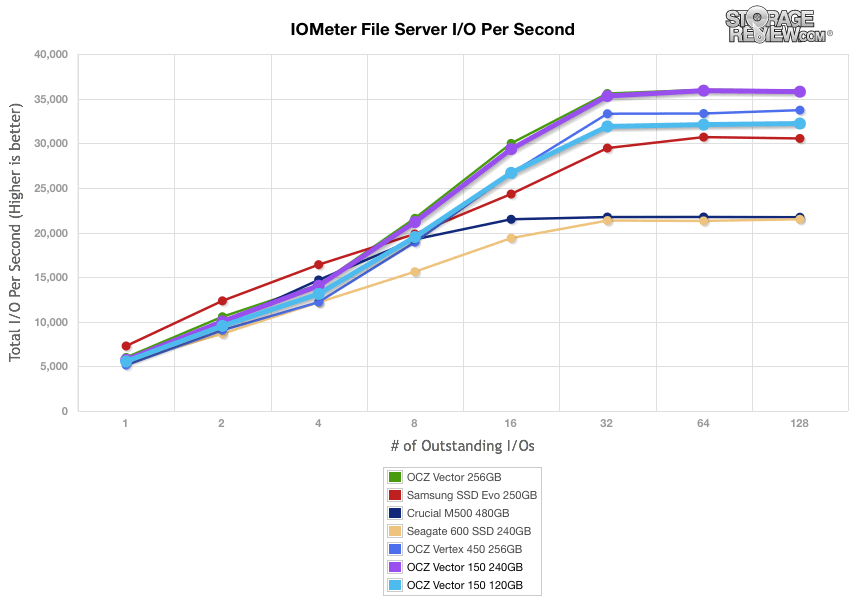 Our web server profile is read-only with a spread of transfer sizes from 512-byte to 512KB. The Vector 150 240GB drive provided performance right in the middle. 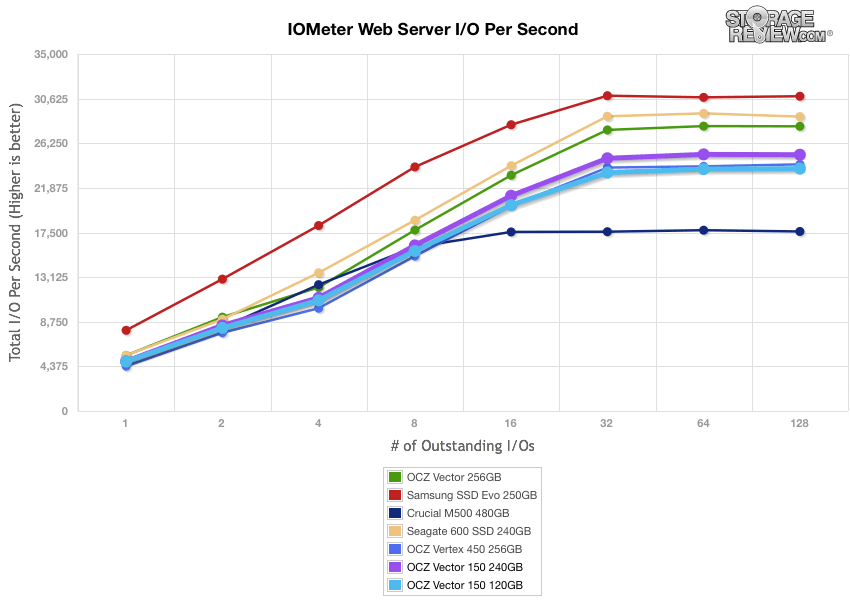 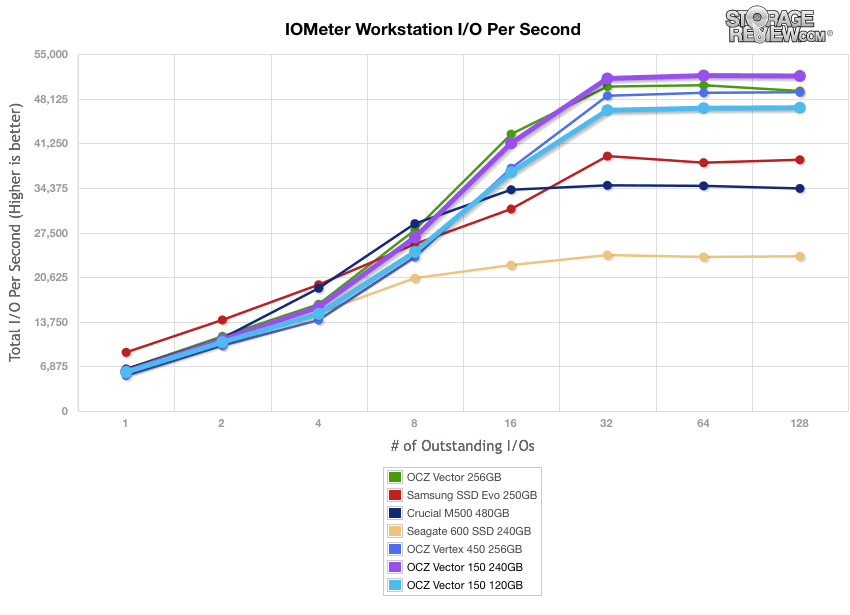 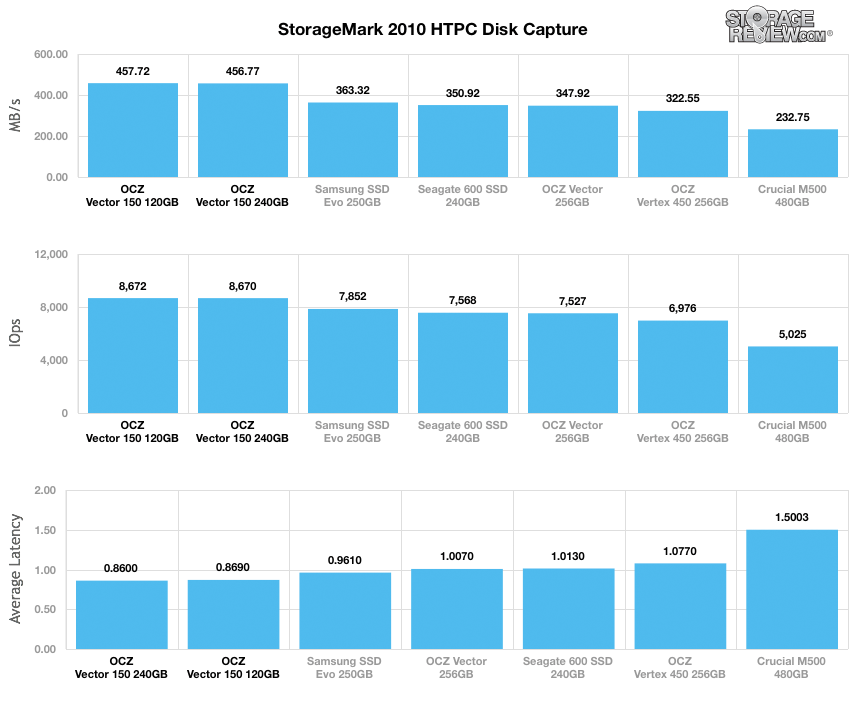 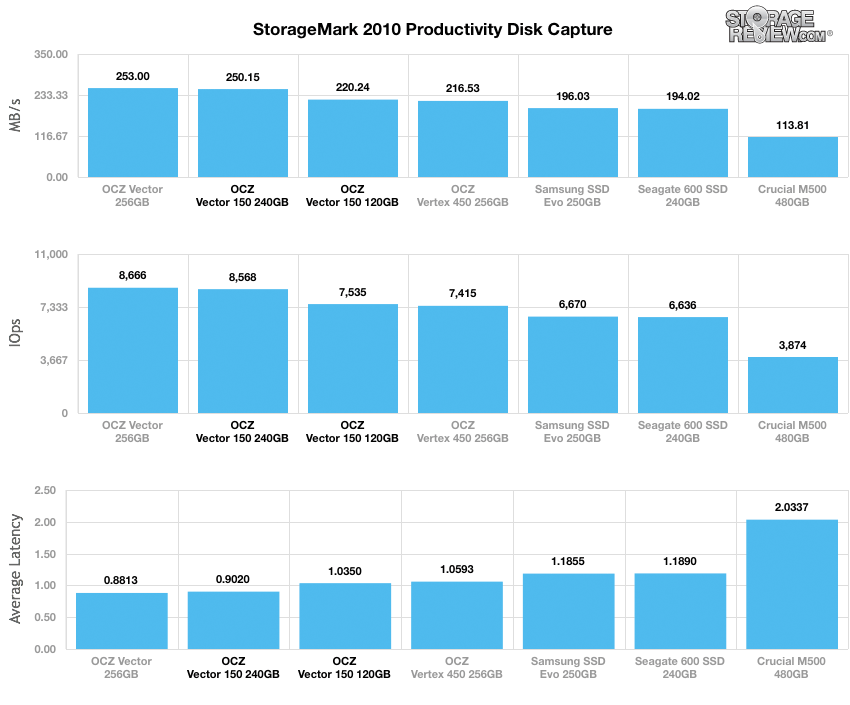 In our Productivity trace, the Vector 150 240GB registered 250.2MB/s, which was just behind the Vector 256GB for first place. 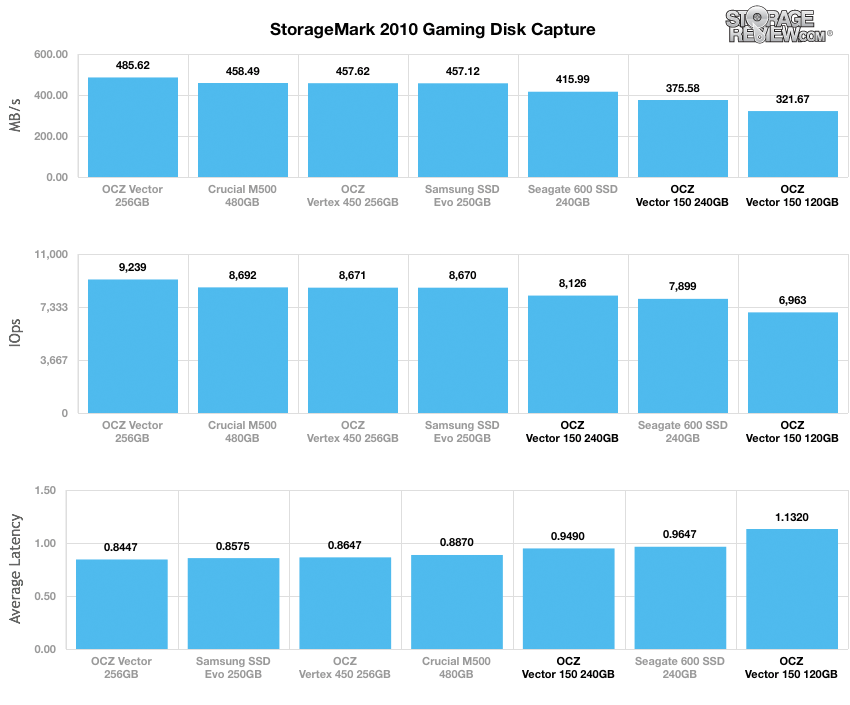 In our tests, we measured idle power consumption from the Vector 150 240GB at 0.61W and 2.97W during sequential write activity, which was the second-lowest overall total. The 120GB unit had the lowest consumption, with an idle power at 0.59W and write activity at 2.71W.

The OCZ Vector 150 line is a progressive addition to OCZ’s family of SSDs. The Barefoot 3 controller gives OCZ a much-needed support and reliability advantage that will help the drive differentiate itself in a space that is dominated by SandForce and Marvell-powered drives. The endurance level of the new Vector 150 series, rated at 50GB/day, is also impressive and the inclusion of AES-256 encryption should open more sales opportunities. Of course the drive is quite the performer as well, boasting throughput that is impressive from a 240GB drive; it will be interesting to see how the 480GB capacity stacks up.

As far as pricing goes, the new Vector 150 series is in the upper to middle echelon compared to the other SSDs we compared in our tests, with the 240GB model going for a street price of $239.99. The 240GB Crucial M500 goes for $155 while the SanDisk Extreme and Samsung 840 EVO go for $300 and $175 respectively. This is a new drive though and sales, coupons and drive age will eventually drive pricing down. And the Vector 150 has two more years of warranty than the EVO for instance, and much higher write endurance.

The OCZ Vector 150 is highlighted by its class-leading performance in our File Server, Database, and Workstation mixed workloads. In Web Server, however, it came in the middle of the pack, as it’s clearly tuned for mixed workloads, not heavy reads. Measuring single workloads, the Vector 150 drives were top performers in 2MB sequential read speeds, and remained competitive in 4K random write speeds. The Vector 150 120GB clocked in at a 20,812 IOPS at QD1, which was the fastest in this category. In our real-world traces, performance slipped in the gaming and productivity traces in comparison to the competition, with the Vector 150 coming in last and middle of the pack respectively. Their brethren, the OCZ Vector 256GB, was the top performer here. Overall, the OCZ Vector 150 proved itself to be a worthy competitor in many of our consumer workloads in the pack of top-performing consumer SSDs.

With its solid overall performance, the OCZ Vector 150 is a worthy addition to the OCZ lineup. What really makes the drive pop though is its endurance. Supporting 91TBW and five year warranty, the Vector 150 offers perhaps the most well rounded feature set available in a consumer facing SSD.