The WD Black 4TB desktop hard drive is the latest high-capacity, high-performance drive from WD. The 4TB Black isn’t entirely new of course, WD has been shipping a drive in this configuration for over a year. The prior 4TB model, WD4001FAEX, was a big step up at the time as it doubled the capacity of the 2TB Caviar Black and topped throughput by 12%. This time around, the WD4003FZEX doesn’t get WD any higher capacity, but it does boast some aggressive performance claims. WD figures performance gains of anywhere between 26%-48% depending on the capacity thanks to an improved dual-core processor and other controller and firmware improvements.

The WD Black 4TB desktop hard drive is the latest high-capacity, high-performance drive from WD. The 4TB Black isn’t entirely new of course, WD has been shipping a drive in this configuration for over a year. The prior 4TB model, WD4001FAEX, was a big step up at the time as it doubled the capacity of the 2TB Caviar Black and topped throughput by 12%. This time around, the WD4003FZEX doesn’t get WD any higher capacity, but it does boast some aggressive performance claims. WD figures performance gains of anywhere between 26%-48% depending on the capacity thanks to an improved dual-core processor and other controller and firmware improvements. The WD Black 4TB has a SATA 6 Gb/s interface, 64MB cache, and is spread across five 800GB platters. In addition to the controller update, WD drives improved performance thanks to their Dynamic Cache Technology, which increases the HDD’s performance by improving caching algorithms in real time as well as optimizing the cache allocation between reads and writes. As a result, the drive automatically allocates more cache for read data, which reduces data congestion and increases overall performance.

The updated WD Black family comes in capacities of 1TB, 2TB, 3TB and 4TB and ships with a class-leading five-year warranty. The 4GB model goes for a street price of $279.99.

Western Digital follows a very common design practice with all of their consumer and enterprise hard drives and is virtually identical to its predecessor, which was released earlier this year. The consumer oriented WD Black 4TB has a WD-standard product label, with the only difference signifying each product series besides the model number is the black insignia at the bottom of the sticker.

The WD Black 4TB is a standard 3.5″ hard drive based on a SATA 6Gbps interface. Here, we see the standard practice of Western Digital to place the heat-producing components in contact with the body of the drive. This allows things like the controller, RAM, and motor driver to dispense heat into the body, which acts as a large heat sink. Additionally, Western Digital makes use of a foam pad placed in between the drive and circuit board to help absorb vibration. 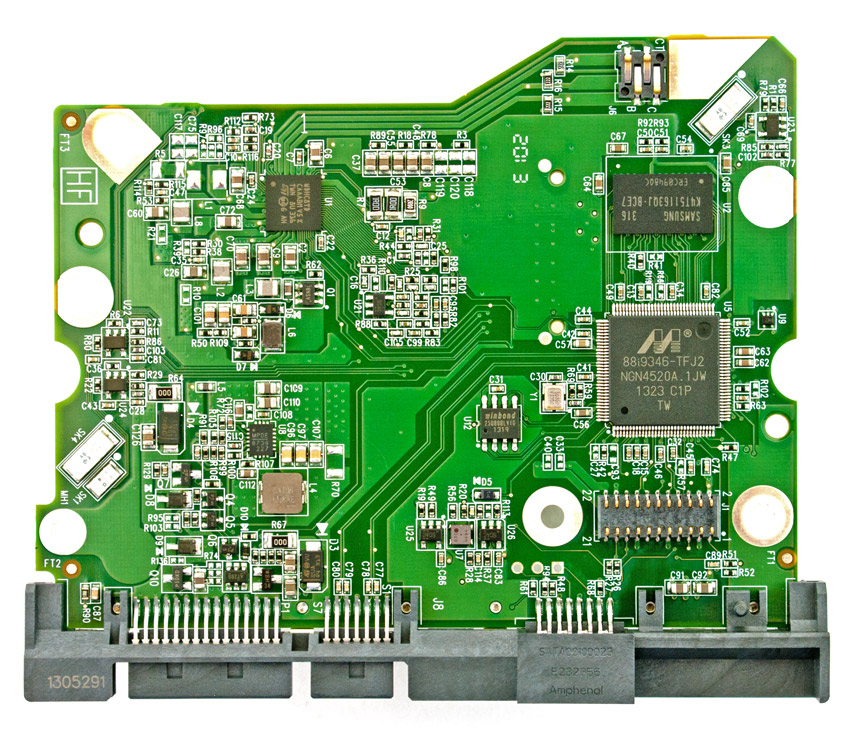 The circuit board includes a Marvell 88i9346-TFJ2 controller chip, as well as 64MB of DDR2 RAM from Samsung.

Our hard drive benchmark process preconditions each drive with the same workload the device will be tested with under a heavy load of 16 threads with an outstanding queue of 16 per thread, and then tested in set intervals in multiple thread/queue depth profiles to show performance under light and heavy usage. Since hard drives reach their rated performance level very quickly, we only graph out the main sections of each test.

In our first workload we look at the performance of each 4TB hard drive with a 100% random 4K write or 100% 4K read workload. In this test, the new WD Black lead the pack with blistering transfer speeds measuring 140 IOPS read and 224 IOPS write.

Comparing max latency, the new WD Black dipped slightly to second place in the read column, with a peak write latency of 2,608ms and a peak read latency of 4956ms. The Hitachi Deskstar landed the best max read latency with 4,773ms.

Comparing 4K read and write latency standard deviation, the new WD Black was back at the top with its consistent performance.

Switching to our 8K 70/30 mixed workload, we measure performance from a low load of 2T/2Q (QD4 effective) up to 16T/16Q (QD256 effective). In this setting, the new WD Black is once again the top performer with the second place Hitachi Deskstar 7K4000 trailing by large amount. One of the bigger differences between the top two drives and the others is that while the new WD Black and Deskstar saw a larger boost as queue depth increased per thread-count, the other plateaued. 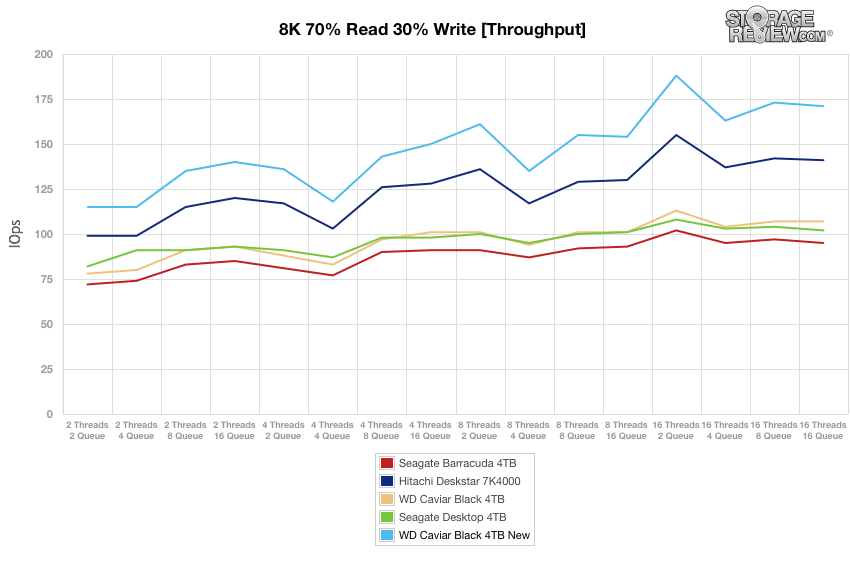 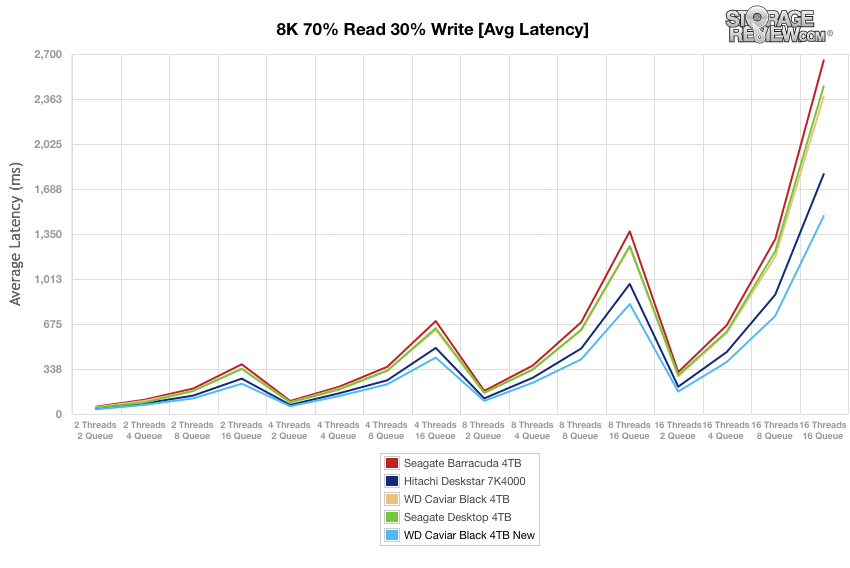 Comparing max latency between each 4TB hard drive, the new WD Black had lower peak response times than all of its comparables except at 16T/2Q point where it went slightly above Seagate Barracuda and Desktop HDs. With lower peak response times than all of its comparables in our 8K 70/30 workload, it also had better latency consistency, though the Deskstar trails closely behind. 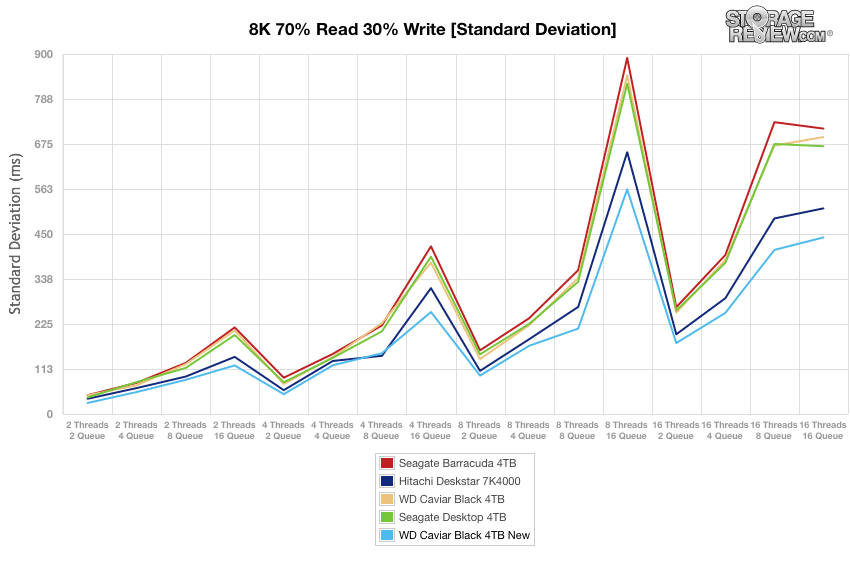 Comparing the sequential performance of each hard drive in a 128K sequential workload, the new WD Black once again led the pack with speeds measuring 186.7MB/s read and a near identical 186.7MB/s write. Its predecessor came in last with a read and write speed of 153.0MB/s and 145.1MB/s respectively.

Our next mixed workload measures the performance of each hard drive in our traditional File Server profile with a transfer size ranging from 512b to 64K. Over the entire range of thread/queue loads, the new WD Black was the top performer by a significant margin, which scaled from 94 IOPS at 2T/2Q to 126 IOPS at 16T/16Q, versus the old model which scaled from 66 IOPS to 86 IOPS. 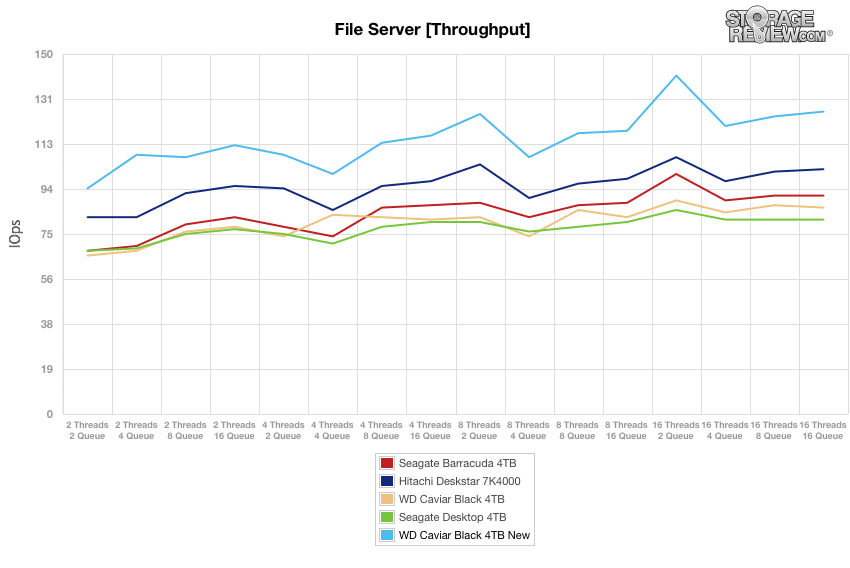 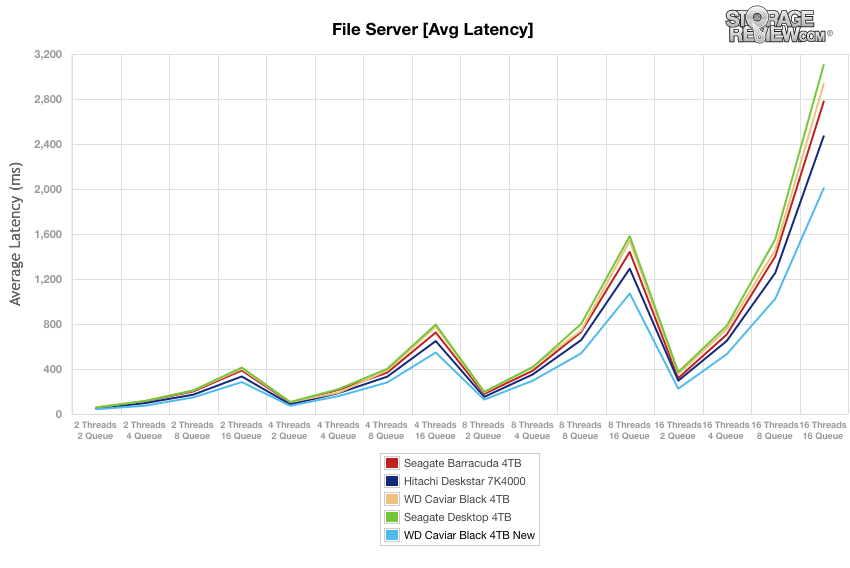 Across the spectrum of applied loads, the new WD Black was able to suppress its peak response times significantly better than the old WD Black, which had the highest peak latency in the group by far. The rest of the comparables faired very well, as they were all around the same latency throughout the range. 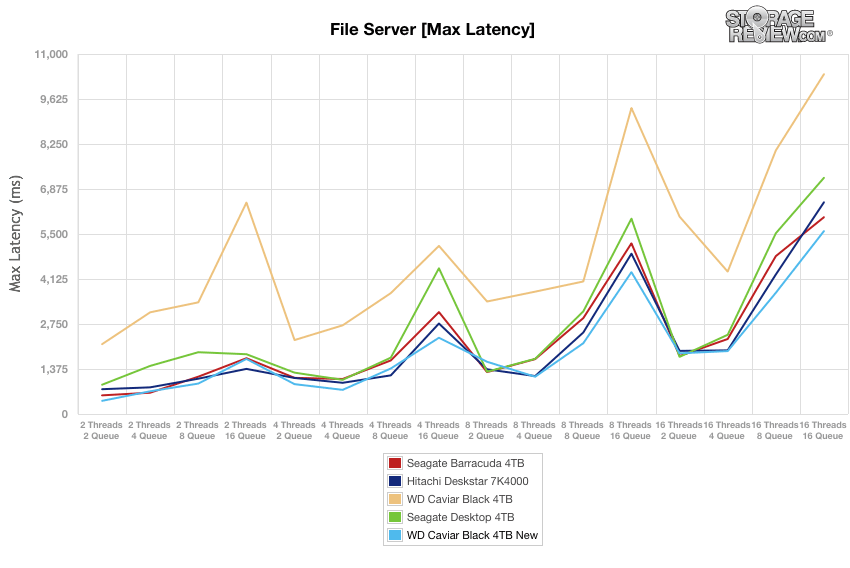 Switching our view to latency consistency in our File Server workload, the new WD Black came in at the top of the consumer 4TB hard drive pack. 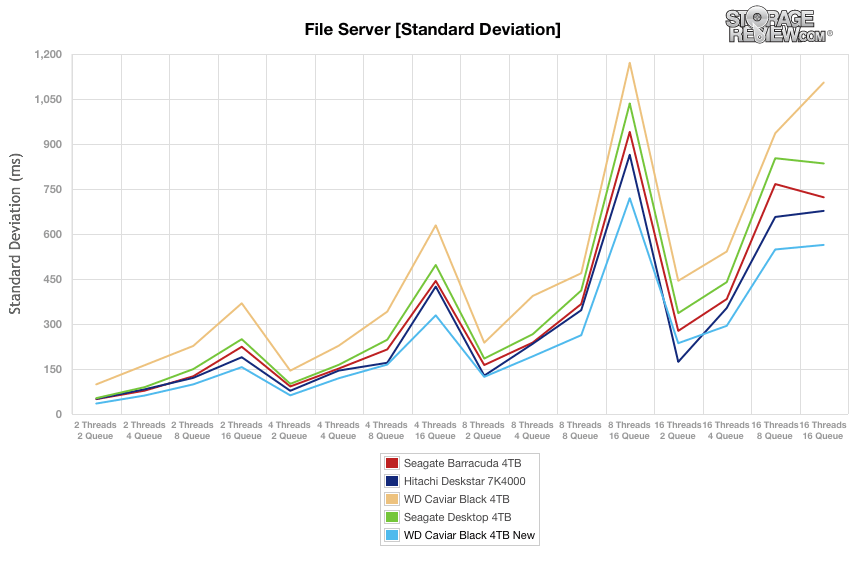 Our last mixed workload measures performance in our Web Server profile, which includes transfer sizes of 512b to 512K in a completely read-only pattern. With this 100% read activity, the new WD Black came in on top once again, with transfer speeds ranging from 104 IOPS at 2T/2Q to 134 IOPS at 16T/16Q, whereas the old WD Black model only scaled from 57 IOPS to 63IOPS. 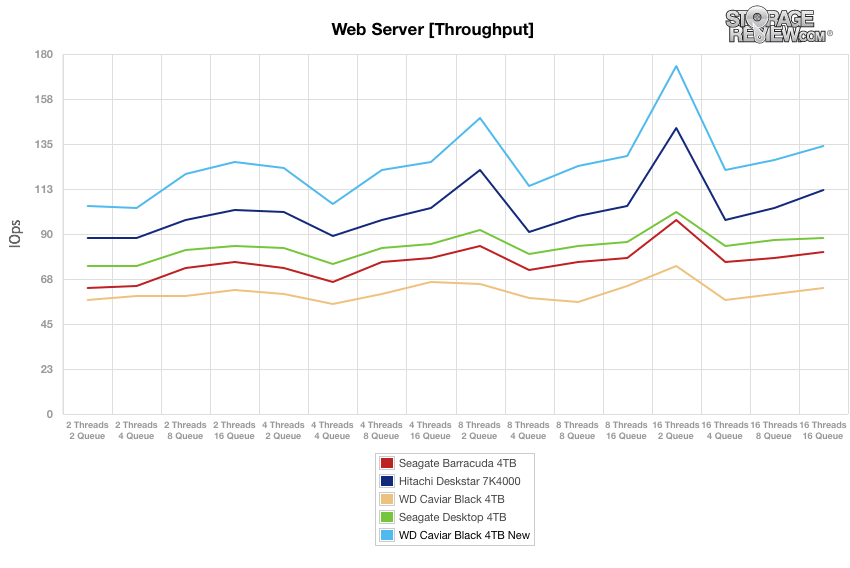 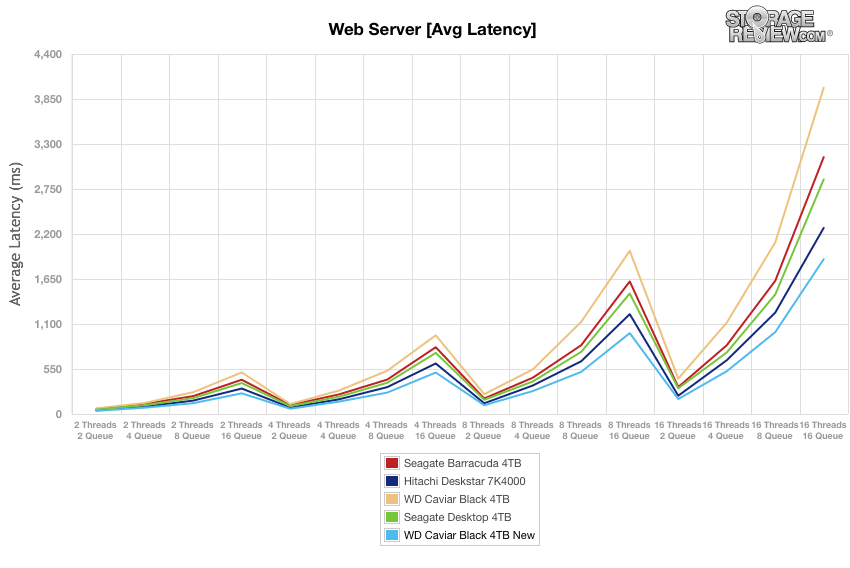 Looking at max latency in our Web Server profile, we see that the new WD Black was right at the top of the pack up until the very end of the range where it fell short to the Hitachi 7K4000. The new WD black maintained its top performance in terms of latency in our standard deviation test, with latency consistency ranked just behind the Deskstar 7K4000. 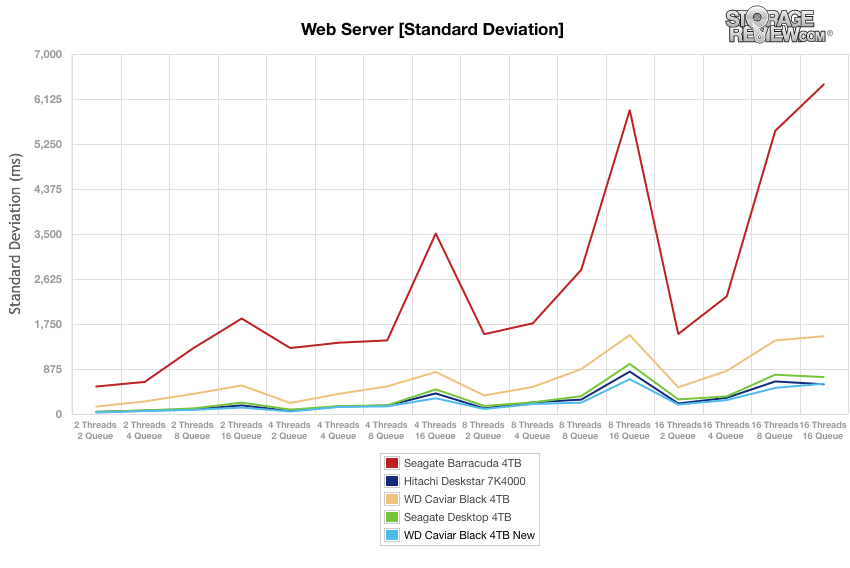 The new WD Black ships in 1TB, 2TB, 3TB, and 4TB capacities and is the company’s updated offering in their high-performance, high-capacity line. The WD Black provides users with a reasonable power consumption option, as quoted power figures hit the 8W in typical idle operation and around 9W for an overall average. Beyond that, the drive features blistering speeds of 171MB/s of sustained throughput with great average latency response times. The new WD Caviar Black is by in large one of the fastest 3.5″ HDDs on the market today with its target users generally being those looking for the most explosive performance available in an HDD, without giving up capacity. Along with its top-in-class performance, the new WD drive also features Vibration Control Technology, or VCT, which allows the platters to adapt to any mounting problems or vibration conditions. As a result, this increases reliability, accuracy, and performance over time.

In our tests, we found the new WD Black Caviar 4TB performed significantly better overall compared to the other 7,200RPM hard drives with the exception of the Hitachi 7K4000, which kept pace in a few categories. In mixed workloads, the new WD Black was frequently at the top of the pack by quite a large margin–especially when it came to throughput–with sequential read transfer performance clocking in at 20MB/s higher than the closest HDD. The updated WD Black HDDs promised higher performance of up to 48 percent, better accuracy, stronger reliability and a greater efficiency; it delivered just that, making this a highly recommended HDD.