The Toshiba TransMemory USB 3.0 flash drive is built for mainstream consumers looking for an affordable solidly built portable drive with reasonable transfer speeds. This Toshiba USB drive is their smallest USB offering and is not positioned as a performance drive but rather as a progressively faster drive than those based on USB 2.0 — Toshiba quotes speeds at 70MB/s read and 10MB/s write.

The Toshiba TransMemory USB 3.0 flash drive is built for mainstream consumers looking for an affordable solidly built portable drive with reasonable transfer speeds. This Toshiba USB drive is their smallest USB offering and is not positioned as a performance drive but rather as a progressively faster drive than those based on USB 2.0 — Toshiba quotes speeds at 70MB/s read and 10MB/s write. 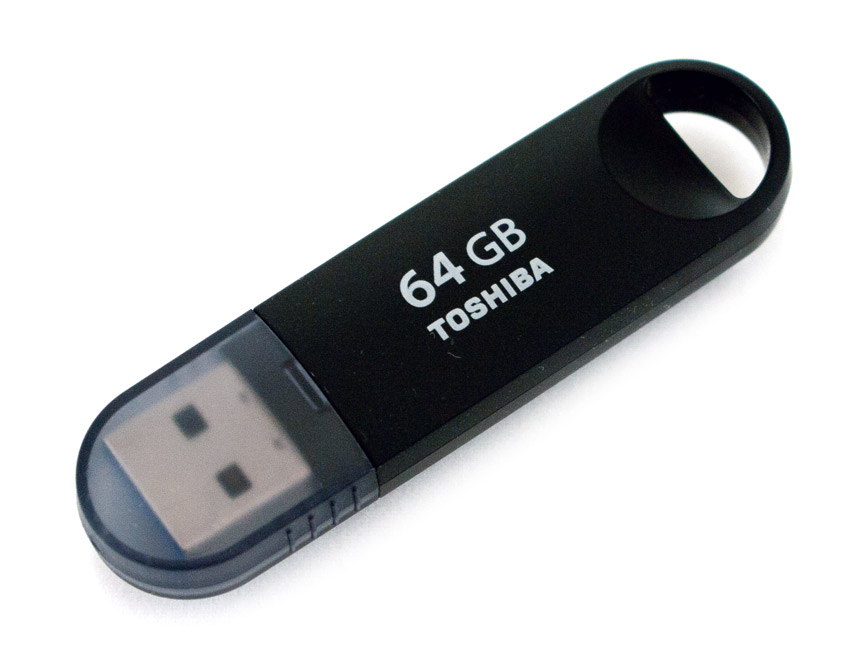 It’s important to note that just because it has a 3.0 label on the box, doesn’t mean that the drive will boast blistering speeds that USB 3.0 is capable of, which is the case with this particular drive. This isn’t necessarily a bad thing however, as many people are simply looking for an affordable drive that has faster transfer speeds than that of USB 2.0. The Toshiba TransMemory certainly delivers on that with a brand that consumers trust and believe will be around long-term to back the drive's warranty.

The Toshiba TransMemory is available in the following capacities and street pricings; 16GB for $20, 32GB for $33, and 64GB for $60. All capacity versions are close to, or on par with the $1/GB threshold, include downloadable security software with password protection, and ship with five-year warranties. Our review unit is the 64GB capacity.

The body of the Toshiba TransMemory USB is an all plastic and is has a nice sturdy build to it. There was also no flex to the device when we put pressure on it. Unfortunately, the Toshiba USB drive has a cap and there is no place to attach it to on the drive once the cap is removed. At this price point we would have preferred that it use a retractable connector, or at least offer a place to store the cap when the drive is in use so it's not lost. 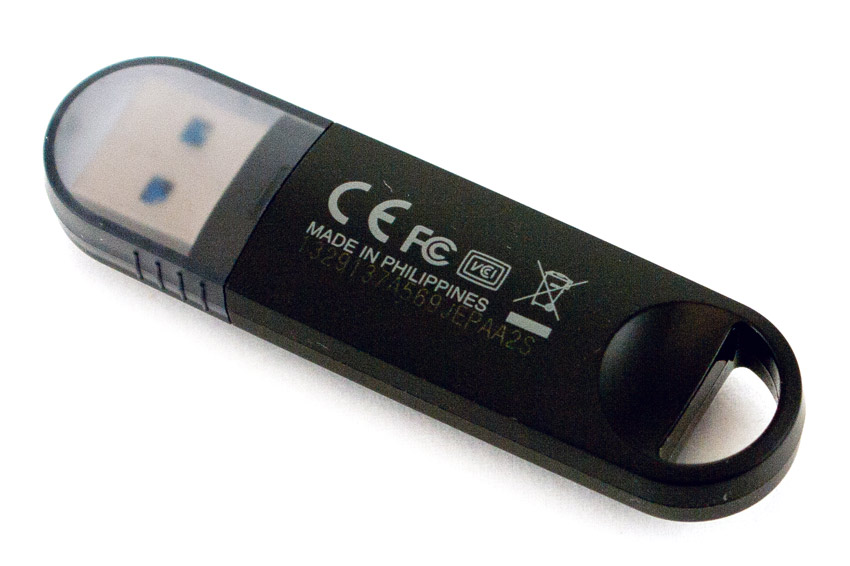 Once the transparent cap has been removed, it reveals the USB 3.0 connector with the classic blue color, distinguishing it from the standard 2.0 USB devices. Toshiba's TransMemory flash drive weighs in at just 0.26oz, making it an extremely light USB flash drive. It measures 0.69 inches thick, 2.56 inches long, and 0.36 inches in height. 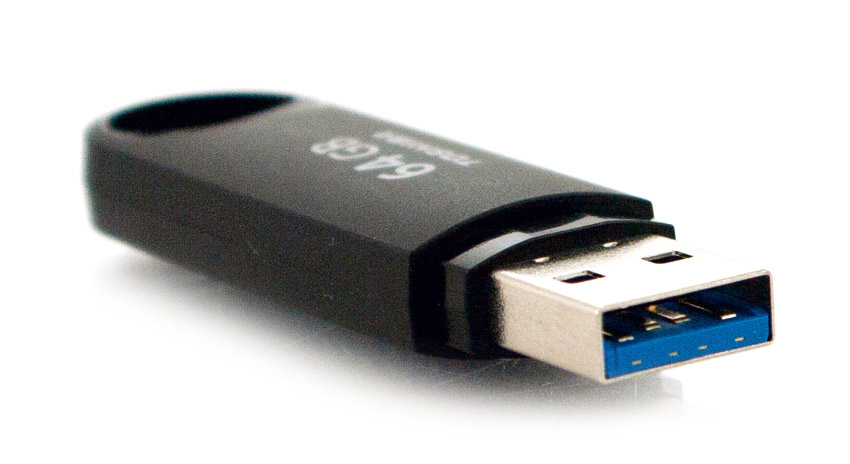 On the front side is Toshiba’s company logo as well as the capacity of the USB drive in light grey; this contrasts nicely to the black enclosure. Located at the rear-end is a small hook for a lanyard or for attachment onto a key ring. It is worth noting that the hook is built into the case enclosure, making it sturdier than some other designs that attach a lanyard hook to the enclosure. A modest design element for sure, but for those who will put the drive on a key ring or some such, the benefit is important.

In this review, we include the following comparables from our database of USB flash drive reviews:

Using our Consumer Testing Platform, we measured sequential read/write speeds and random read/write speeds. The Supersonic Rage is a midrange product from Patriot, while the Boost XT is their lower-end USB 3.0 offering.

Using our Consumer Testing Platform, we measured transfer speeds from the Toshiba TransMemory with IOMeter. In the sequential read speed column, it measured 101.75MB/s, while write activity hit 31.93MB/s. The Patriot Supersonic Boost XT was the top performer as far as read goes, which clocked in at 115.3MB/s read and 48.4MB/s write. The Patriot Supersonic Rage XT posted sequential read speeds of 109.6MB/s while taking first place in the write column with activity hitting 93.4MB/s.

Switching to random large-block transfers, the Toshiba TransMemory reached speeds of 80.71MB/s read but fell short with 2.11MB/s write; this drop in write performance is expected though in a drive of this class. As for the Patriot Supersonic Boost XT 's benchmarks, it boasted read and write speeds 112.0MB/s and 3.8MB/s respectively. The Rage XT showed reads of 105.5MB/s and, like the others, clocked in a much slower random writes with 4.4MB/s.

The performance results behaved as predicted. Both the Boost XT and Rage XT are positioned as more as performance USB 3.0 drives; Toshiba's messaging around the TransMemory is more mainstream. Either way, the Toshiba drive held up well then against other same-class drives. It is worth noting however that pricing is as much a part of the buying decision as performance. The current class-leader in that combination is the SanDisk Extreme which isn't much more expensive than the Toshiba offering; but is much faster across the board. The Toshiba drive is just hitting the market now though and street prices should fall, which would increase its value-proposition for the mainstream buyer.

The Toshiba TransMemory USB 3.0 is a solid, compact flash drive that doesn’t flex when pressure is applied. It is designed for the mainstream consumer, with quoted speeds of 70MB/s read and 10MB/s write for all capacities offered. The drive comes with downloadable security software with password protection created folders, which is a nice touch for those who need it. Toshiba’s TransMemory USB 3.0 Flash Drive is available in capacities of 16GB for $20, 32GB for $33, and 64GB for $60 (street prices at time of this review). Comparatively, the Patriot Supersonic Boost XT 64GB goes for a noticeably cheaper street price of $50 and the Patriot Rage XT 64GB is listed at $64. The SanDisk Extreme, which outclasses all USB drives in terms of performance per dollar, retails at $70 for the 64GB capacity.

When testing the Toshiba flash drive, we found that it in fact over-delivered in performance, which was surprising because of how much it was under-quoted by Toshiba. Sequential speed results were 101.75MB/s read and 31.93MB/s write. Random results showed a respectable of 80.71MB/s but a crawling 2.11MB/s write. Even so, depending on pricing in retail, the drive is still well made, does very well enough with its sequential workload, and is a light and super-compact travel partner for mainstream use cases.

If you’re looking for a compact USB 3.0 flash drive with transfer speeds not being the deciding factor, the solidly built Toshiba TransMemory USB 3.0 is a good solution when price points are in its favor.