The core components and firmware deliver impressive quoted throughput, delivering burst reads up to 550 MB/s and writes of 525 MB/s along with random 4K read of up to 60,000 IOPS and random 4K writes up to 60,000 IOPS. The drive isn’t all about performance though, beyond the enterprise grade controller, NAND components and firmware, OWC also offers power fail protection via what they call Paratus Power Technology. The power protection is provided by KEMET Organic Tantalum Capacitors (KO-CAP), which allows the controller to filter and regulate incoming power, and flush data in transit to NAND safely in the event of power loss.

The Mercury Enterprise Pro 6G uses a standard 9.5mm, 2.5″ form factor with SATA 6Gb/s interface, making it easy to deploy into servers, workstations and the like. For varied usage scenarios from boot drive to tiering and caching, OWC offers the drive in 50GB, 100GB, 200GB and 400GB capacities with over provisioning up to 28%. The drives are sold through OWC’s website and carry retail prices of $629, $720, $1080 and $1800 respectively. Incidentally, OWC is one of the few enterprise drive manufacturers who publish single drive pricing for their SSDs. 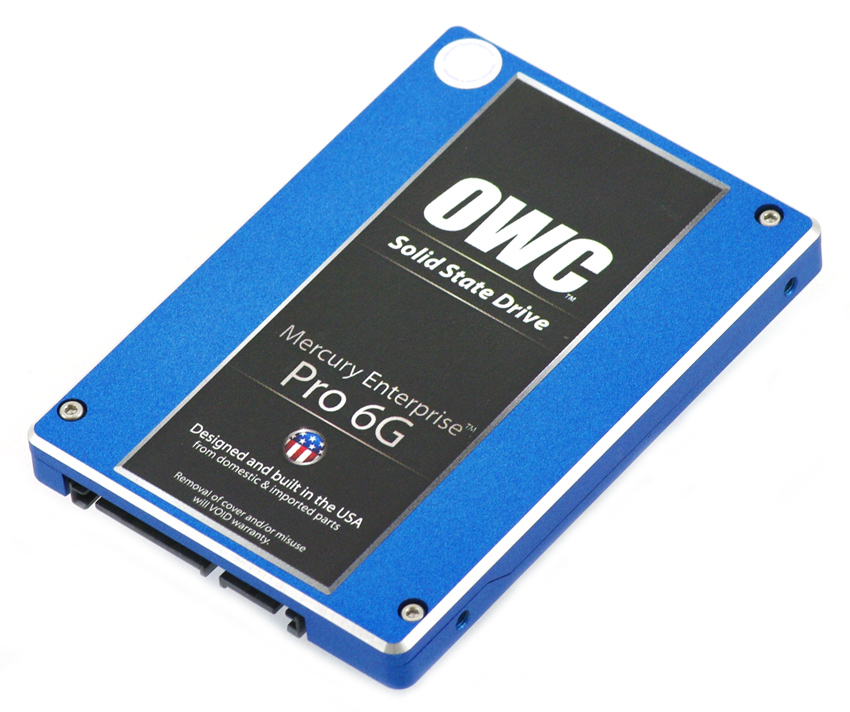 OWC stays true to their consumer SSD roots with the design of the Mercury Enterprise Pro 6G SSD. The body is an all-metal design, painted metallic blue, with a machined edge circling the top of the drive. OWC also makes sure to use the label to point out their drives are designed and built in the USA, which is pretty rare these days in the tech market. 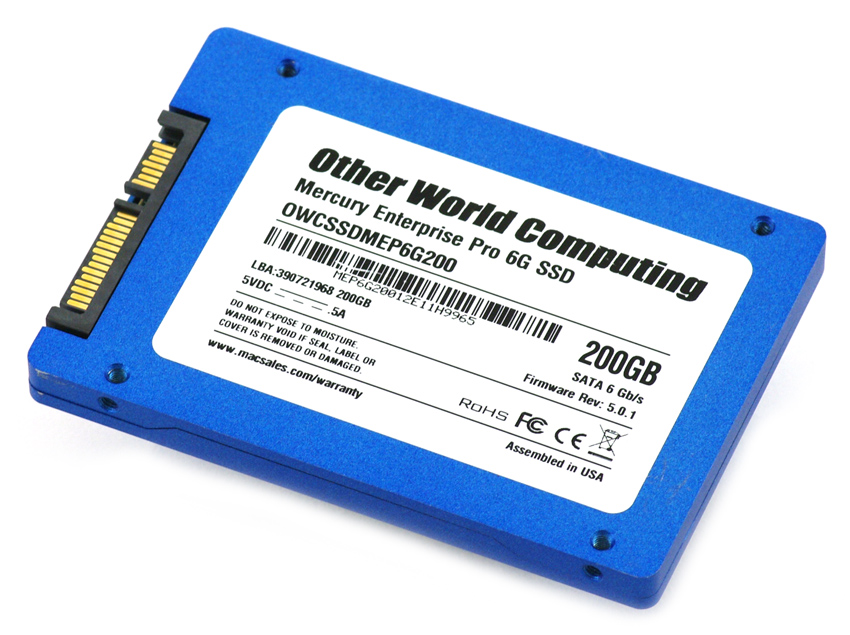 The bottom of the drive includes detailed information about the drive, including the serial number, model number, firmware revision, and drive size specifics. Also visible are the standard lower mounting holes for drive trays. The side of the drive is rather basic apart from a clean beveled edge that adds a bit of glitz and glamour to the Enterprise SSD. On the front the OWC Mercury Enterprise Pro 6G has the SATA power and data connection, with no service pins visible. Overall the look and feel of the new 6G is very impressive. Not that looks matter a great deal when it comes to selecting an SSD, but there’s something to be said for a case design that’s sturdy and visually appealing.

With the covers removed from the Mercury Enterprise Pro 6G, we see the LSI SandForce SF-2582 processor combined with sixteen 16GB Toshiba eMLC Toggle Synchronous NAND. No thermal pads were present in the case, although we didn’t run into any performance throttling issues during our long-term endurance testing in a high air-flow server drive bay.

The LSI SandForce SF-2582, which doesn’t require a additional SDRAM buffer, and has an operating temperature of up to 70C in a commercial environment. The controller also supports AES-128/256 and TCG Encryption. The 24nm eMLC NAND used on this drive is rated for 10,000 P/E or Program-Erase cycles, although at the time of this review, there were no published TBW figures for this model. 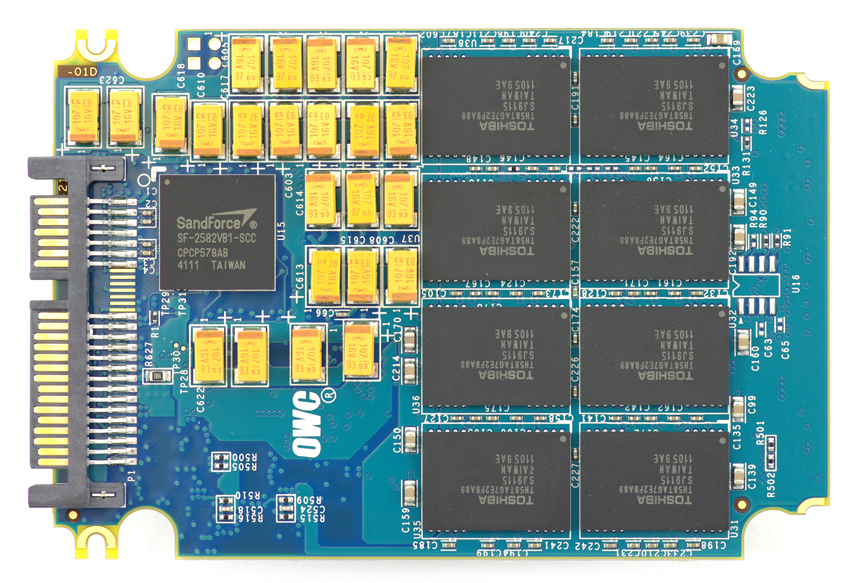 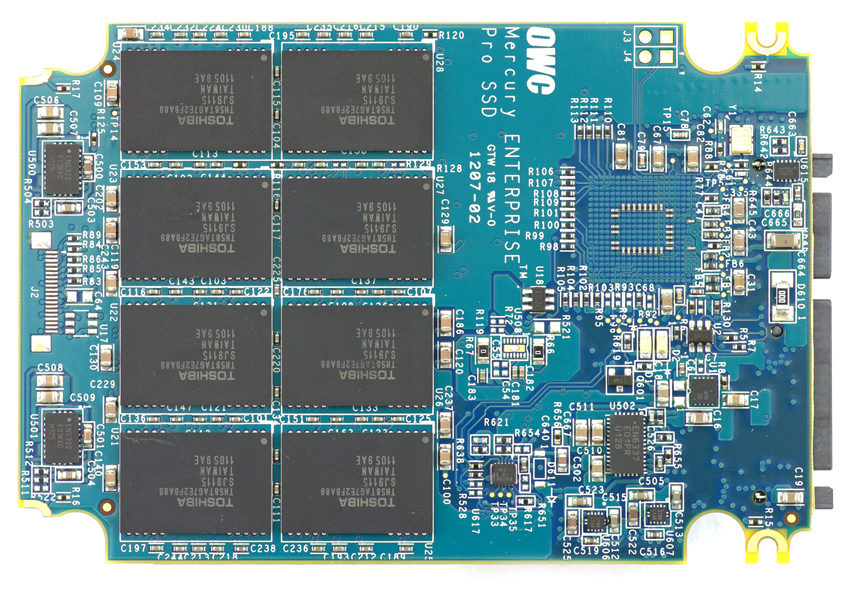 Another feature found inside the OWC Mercury Enterprise Pro 6G is what OWC calls Paratus Power Technology. This power-fail protection, supported by 24 KEMET Organic Tantalum Capacitors (KO-CAP), allows the controller to filter and regulate incoming power, with the ability to detect an eminent power failure and flush data in transit to NAND safely. Without on-board SDRAM the SSD has very little data not being actively written to NAND, meaning longer hold-up times associated with super-capacitors (as well as their higher failure rates) are not needed. The 24 100uF capacitors offer a total capacitance of 0.0024F. 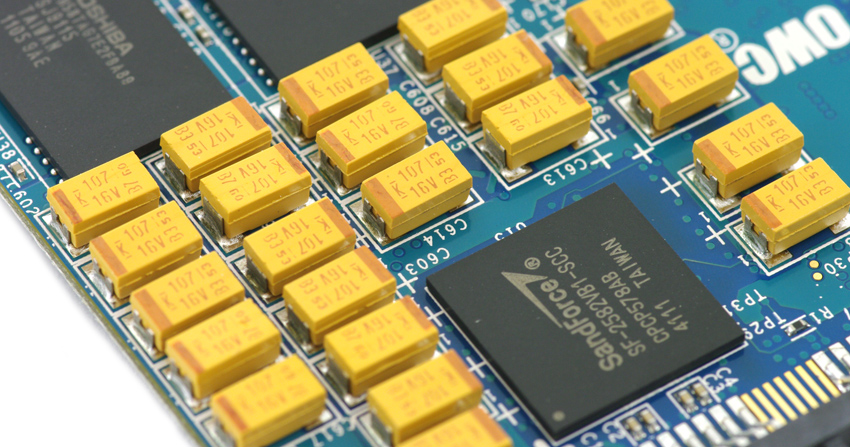 Our first test looks at the speed in a sequential write environment with large block transfers. This particular test uses a 2MB transfer size with IOMeter, with 4k sector alignment and measures performance with a queue depth of 4. OWC lists maximum sustained burst read speed of 550MB/s and a write speed of 525MB/s for their 200GB Mercury Enterprise Pro 6G . Since this test measures steady-state performance, instead of burst figures for equal comparison across all enterprise drives in a constant workload environment, our measurements will be under the advertised amount since they represent a different longer activity instead of a momentary or burst recording.

In our large-block sequential transfer test we measured a read speed of 490MB/s and a steady-state write speed of 200MB/s. These values come up under the SMART XceedIOPS2, although the differing NAND types (24nm vs 32nm) are likely a key reason.

In our large-block random transfer test the Mercury Enterprise Pro 6G maintained a read speed of 485MB/s with steady-state write speeds measuring 63MB/s. These ranked middle of the pack of the eMLC-based SSDs we have previously reviewed.

Switching to even smaller random access transfer size of 4K, we get closer to the packet size that might be found in a heavy random access environment such as a server setting with multiple VMs accessing the same array. In the first test we look at expanded 4K read performance and how it scales from a queue depth of 1 to a maximum of 64. 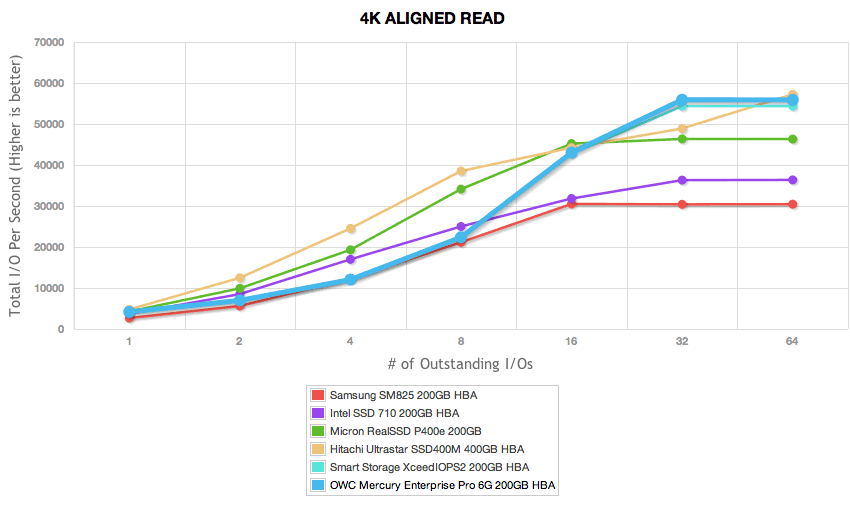 The SandForce SF-2582 processor inside the Mercury Enterprise Pro 6G performed very well in our expanded 4K random read test, with a peak speed of 55,913 I/O at a queue depth of 32.

Our next test looks at 4K random write performance at a static queue depth of 32 and results are recorded and averaged once the drives have reached steady-state. While IOPS performance is a good metric to measure steady-state performance, another key area of interest is around average and peak latency. Higher peak latency figures can mean certain requests can backed up under heavy continuous access. 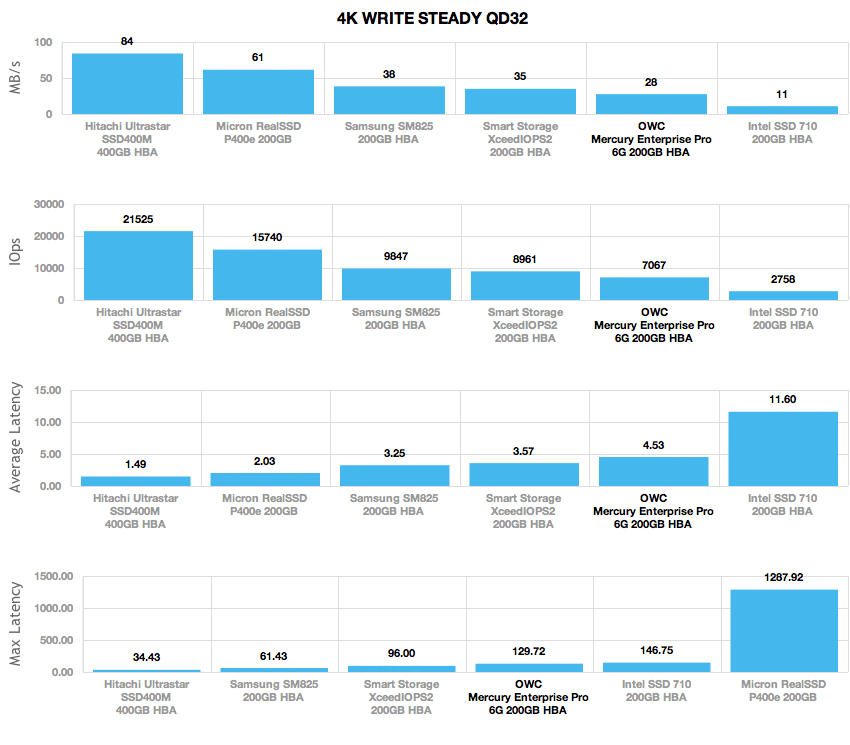 Under a continuous workload, the Mercury Enterprise Pro 6G maintained a steady-state 4K random speed of 7,067 IOPS with an average speed of 28MB/s. Average latency during this test measured 4.53ms with peak latency during our test topping at 129.72ms. 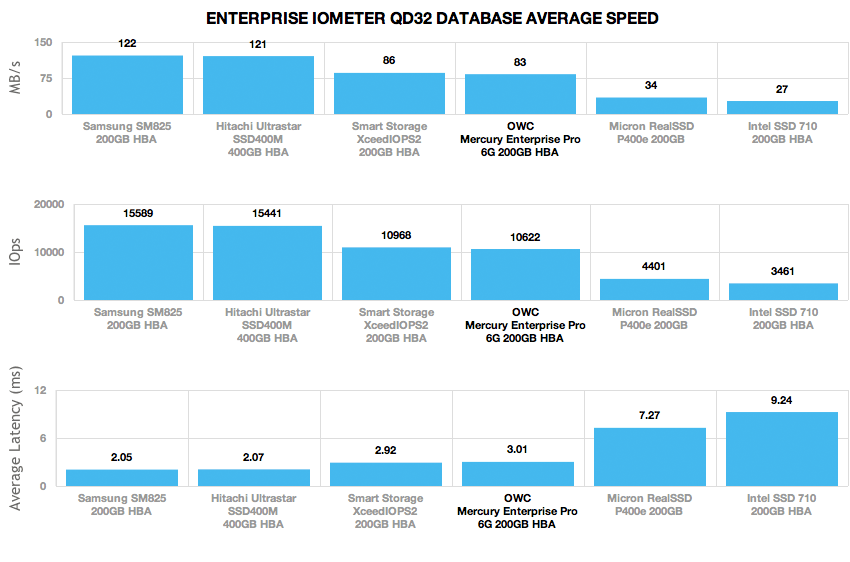 The OWC Mercury Enterprise Pro 6G maintained a steady-state speed of 10,662 IOPS or 83MB/s in our Database profile test. This ranked toward the middle of the other high-performance eMLC models, above the eMLC-equipped Intel SSD 710 and the entry-enterprise MLC-based Micron P400e. 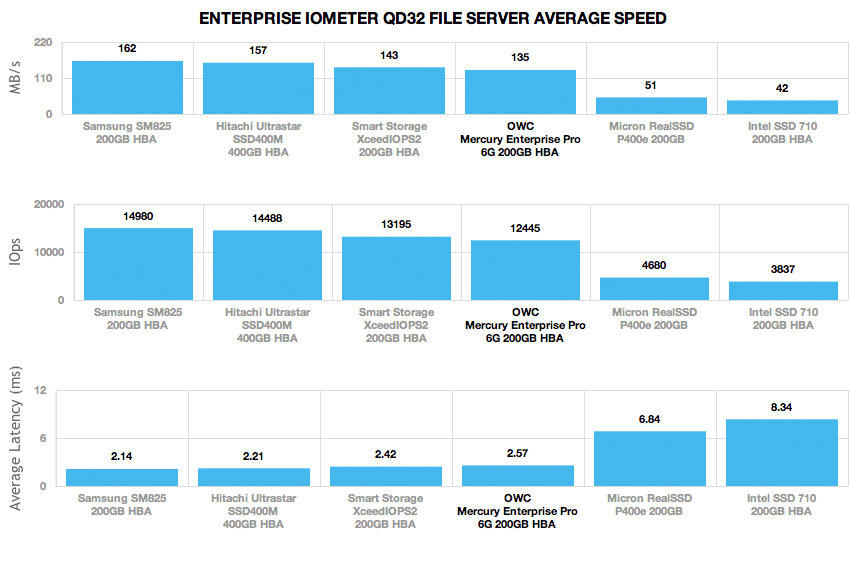 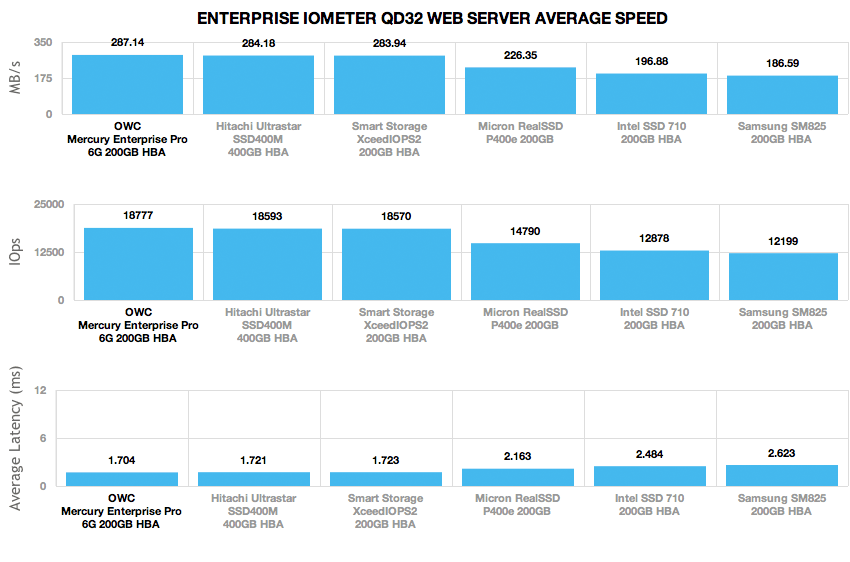 In a read-only environment, the OWC Mercury Enterprise Pro 6G moved to the front of the pack with a steady-state speed of 18,777 IOPS or 287MB/s. 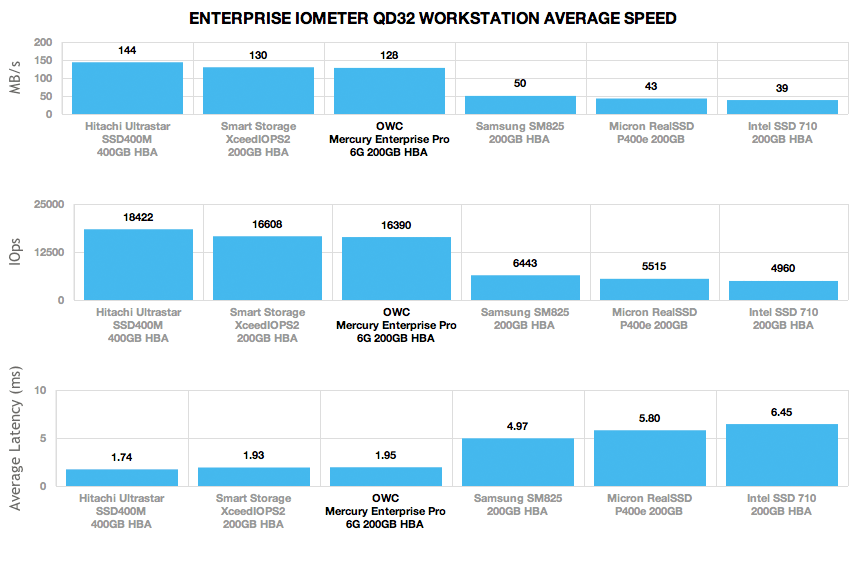 In a workstation environment the Mercury Enterprise Pro 6G ranked 3rd among the eMLC enterprise-grade SSDs we have reviewed, coming in below the Ultrastar SSD400M and Smart XceedIOPS2 and well above the Samsung SM825, Micron P400e or Intel SSD 710 with speed of 16,390 IOPS or 128MB/s. 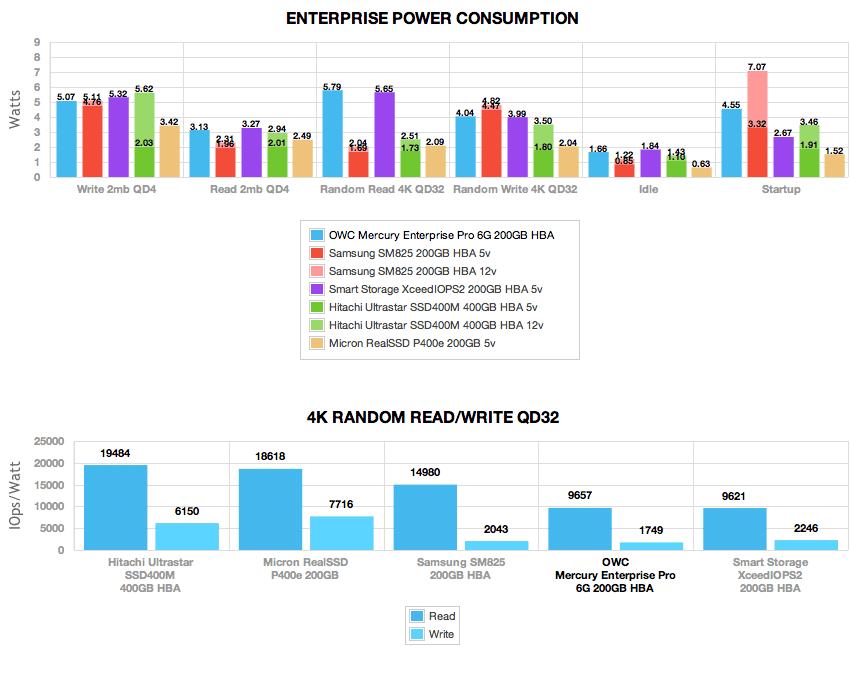 OWC boldly plants their flag in the entry and mainstream enterprise markets with the Mercury Enterprise Pro 6G SSD. The SSD includes an LSI SandForce SF-2582 processor combined with Toshiba eMLC NAND, then OWC takes it up a notch with an industry leading seven year warranty. Sure, some users may blow through the endurance numbers before that window, but even so, knowing that OWC has that level of confidence and backing of the drive is comforting to many buyers. Adding to that level of comfort are enterprise-grade features such as OWC’s Paratus Power Technology that protects data in the event of a power interruption through use of an array of discrete capacitors.

Turning to performance, the OWC Mercury Enterprise Pro 6G posted exceptional results in our Webserver profile, owning the top spot ahead of the Smart Storage Systems XceedIOPS2 and Hitachi Ultrastar SSD400M. In workloads with write activity, the Enterprise Pro 6G ranked middle of the pack, trailing the XceedIOPS2 by only a small margin. With a great deal of NAND and processor similarities with the Smart Systems SSD, it really comes down to the generation of Toshiba eMLC flash used and firmware differences. OWC went with newer 24nm NAND while Smart Storage Systems stuck with older 32nm, although with unique firmware numbering it’s hard to tell if they are both using the same base SandForce firmware.

Beside the Intel SSD 710, the OWC Mercury Enterprise Pro 6G is the only eMLC-equipped SSD we have reviewed that does not use thermal pads to dissipate heat from the circuit board into the outside metal case. While it didn’t present performance problems in our testing, we felt it worth noting. It’s not uncommon to see thermal pads omitted in entry enterprise SSDs which are aimed at read-heavy workloads, albeit those are generally equipped with standard MLC NAND with that type of activity in mind. In a write-heavy environment though, addressing thermals is a big deal. Thankfully OWC’s power-fail protection method uses discrete capacitors, with a temperature rating in excess of 100C, so stress from heat should be less of an issue with this drive. There’s also the seven year warranty coverage should the hardware have any issues.

The OWC Mercury Enterprise Pro 6G offers the best performance in our Webserver benchmark of any eMLC SSD to date and isn’t far behind on the other three profiles. Aside from enterprise components throughout OWC also includes discrete capacitors for power-fail protection and the industry’s longest warranty of seven years. With a wide range of capacity options, the Enterprise Pro 6G will happily crank away for years delivering top-tier performance in both entry and mainstream enterprise duties.