After Patriot’s two-year hiatus from the SSD industry, the company has finally put themselves right back in the thick of things with the release of the Patriot Ignite SSD, which is designed for a variety of use cases inside notebooks and PCs including gaming and content creation. Their switch to solely focusing on flash media and memory products was mostly due to their minimal success with their previous SSD products, including the Patriot Pyro, Blaze, and Torch drives. These kinds of setbacks are common, as smaller companies need to offer something unique or anything else to differentiate themselves from the storage titans. That being said, the Patriot Ignite has been equipped with the new Phison S10 controller, quoting maximum sequential read and write speeds up to 560MB/s and 545MB/s, respectively, using a SATA III 6.0 Gb/s interface.

After Patriot’s two-year hiatus from the SSD industry, the company has finally put themselves right back in the thick of things with the release of the Patriot Ignite SSD, which is designed for a variety of use cases inside notebooks and PCs including gaming and content creation. Their switch to solely focusing on flash media and memory products was mostly due to their minimal success with their previous SSD products, including the Patriot Pyro, Blaze, and Torch drives. These kinds of setbacks are common, as smaller companies need to offer something unique or anything else to differentiate themselves from the storage titans. That being said, the Patriot Ignite has been equipped with the new Phison S10 controller, quoting maximum sequential read and write speeds up to 560MB/s and 545MB/s, respectively, using a SATA III 6.0 Gb/s interface. 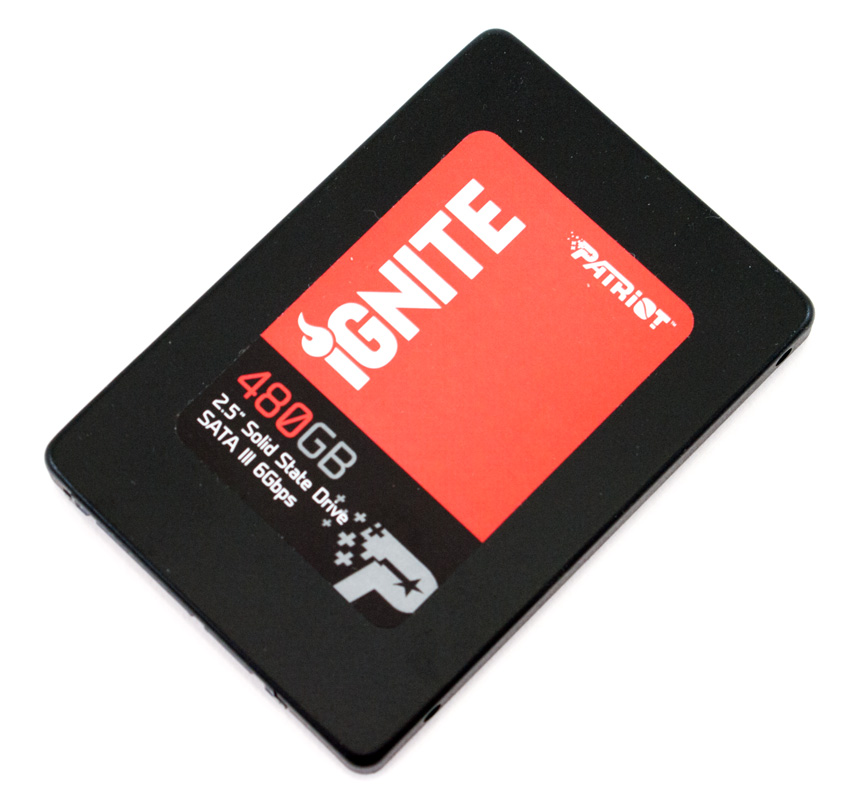 The Patriot Ignite includes intelligent advanced wear-leveling and ECC recovery at 115bits/2KB. In addition, the Phison controller has End-to-End data path Protection (ETEP), an enterprise-like feature that protects the entire data path. The Ignite also has Advanced Garbage Collection and Advanced Wear-Leveling, the former which manages used data blocks to help increase SSD performance and endurance while the latter is comprised of intelligent static and dynamic Wear-Leveling, enabling even distribution of flash wear-out. In addition to its ETEP feature, the Phison controller uses SmartFlush technology to store the in-flight data on the cache (volatile memory) ensures that it is safely transferred onto the NAND memory (non-volatile).

The Patriot Ignite SSDs uses the same design as other Patriot drives, such as the Blaze and Ignite, which use an all-black metal chassis. On the front of the SSD is a red and black sticker with the product name, capacity size, and company branding. It also indicates that it is a 2.5’ Solid State Drive with SATA III 6Gps, allowing it fit in new notebooks and Ultrabooks that require the 7mm design.  Overall, this is a nicely designed drive and it feels fairly rugged when handled. 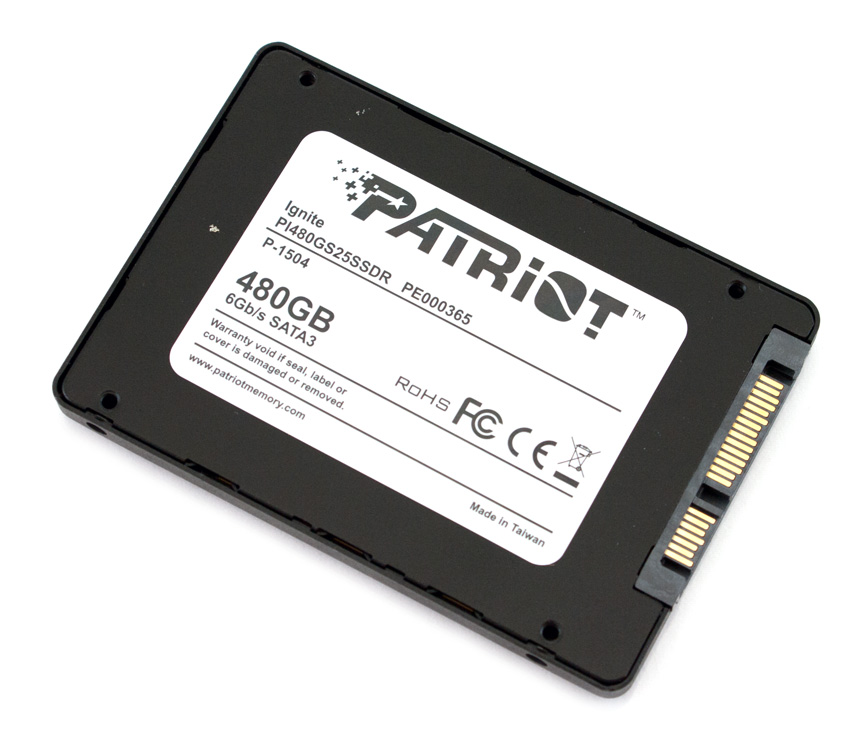 The backside of the Patriot Ignite shows all the information users need to know, including serial numbers, model, barcode, and PNs. 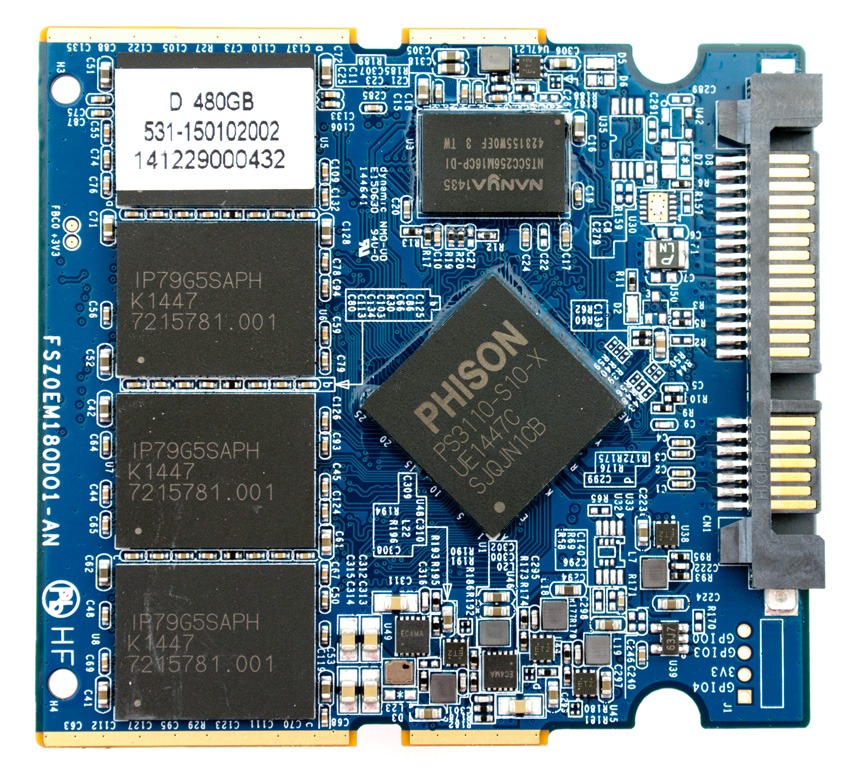 As is standard among SSDs, each side profile of the Patriot Ignite has two screw holes, allowing the drive to be easily mounted. To open up the drive, simply remove all four screws located on each corner of the front panel. 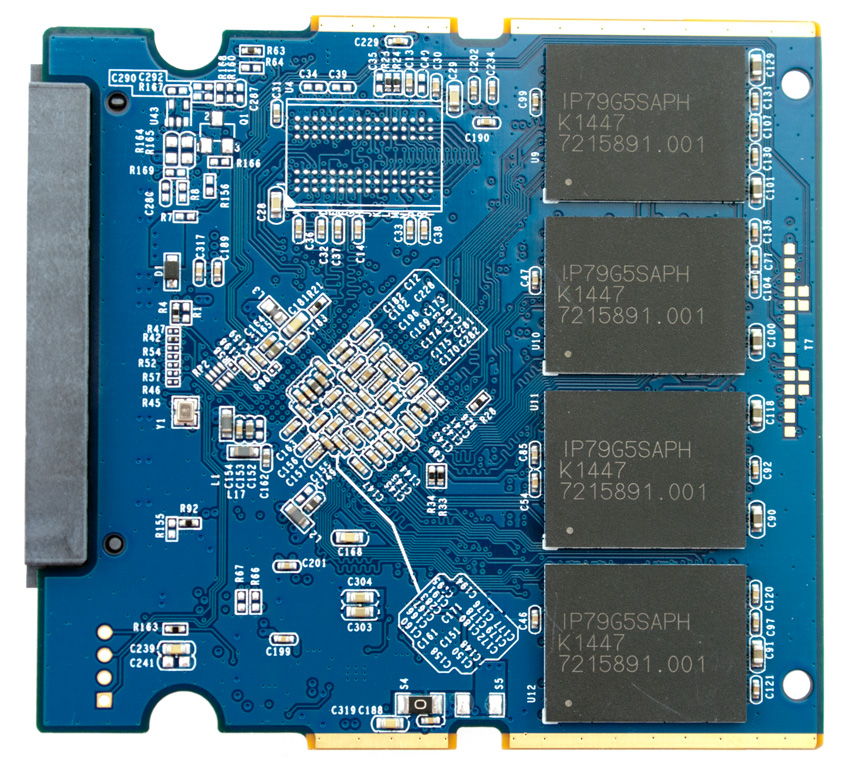 The Patriot Ignite utilizes a Phison S10 Series controller, which is located on the front of the board next to a DRAM chip and four NAND packages. When turned over, you will see the remaining four NAND packages in perfect alignment.

All consumer SSD benchmarks are conducted with the StorageReview HP Z620 Workstation. We compared the Patriot Ignite to following drives:

Our first test measures 2MB sequential performance, where the Ignite 480GB posted a mediocre 471.73MB/s read and a very poor 146.01MB/s. These results placed the Patriot drive at the bottom of our leader boards.

Moving to our 2MB random transfer performance, the Ignite performed a noticeably better, posting read and write activity at 465.41MB/s and a leading 482.07MB/s, respectively. The top read performer here was the Crucial MX200 500GB, which posted 493.37MB/s.

When switching to smaller 4K random transfers, we measured Ignite with only 27.35MB/s read and 107.22MB/s write, placing it at the bottom of the pack again. Unsurprisingly, the Samsung 850 EVO 250GB was the top performer here with 38.44MB/s in read activity.

When comparing 4K latency between each mainstream consumer SSD, the Patriot Ignite placed at bottom of the pack in average latency (0.0362ms) though it had the best peak latency at only 1.244ms, which was noticeably better than the second place Corsair drive, which had 1.76ms. 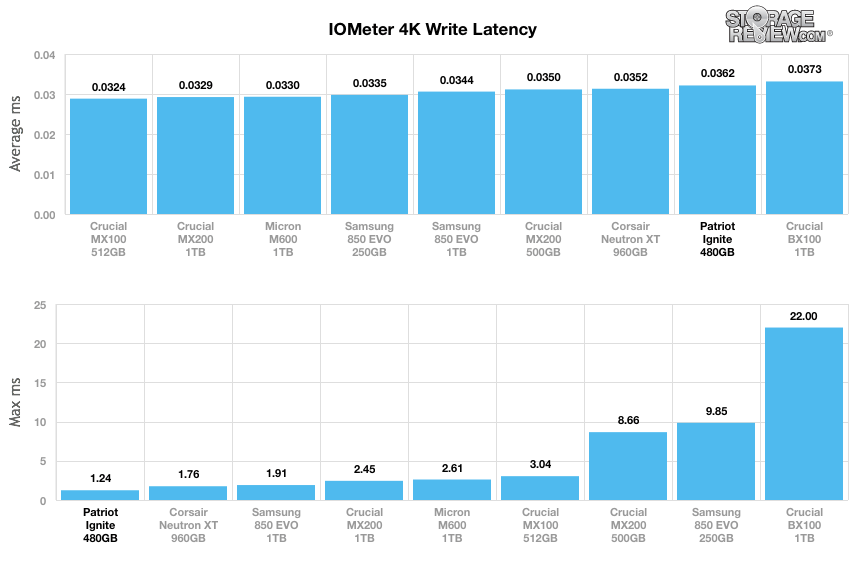 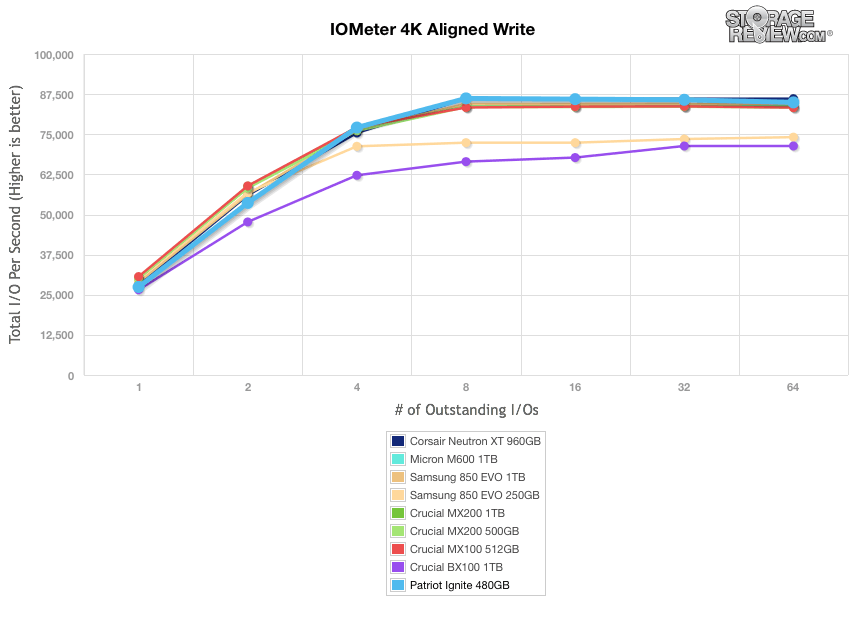 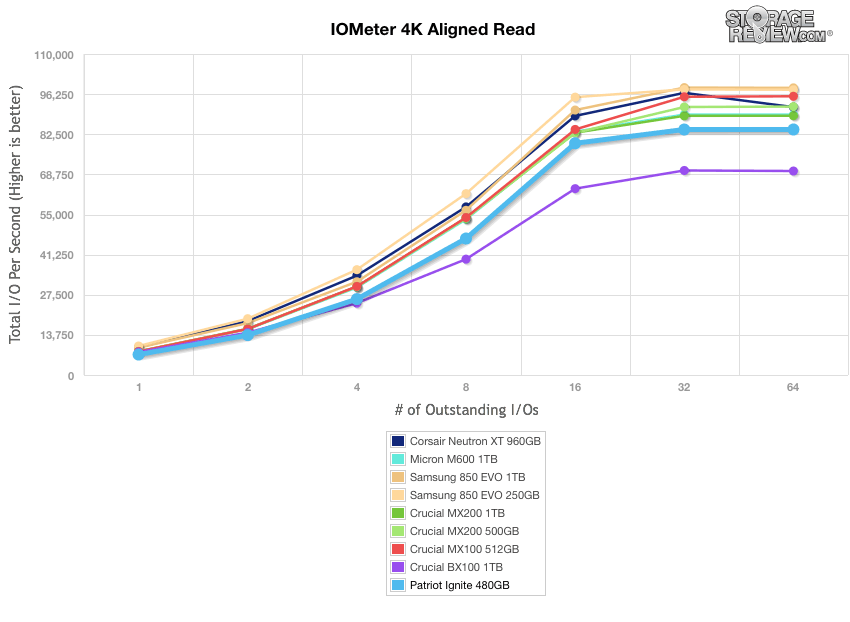 Our last series of synthetic benchmarks compare the hard drives in a series of server mixed-workloads with a queue depth of ranging from 1 to 128. Each of our server profile tests has a strong preference towards read activity, ranging from 67% read with our database profile to 100% read in our web server profile. Here, the Patriot Ignite placed at near the bottom of the leaderboard in every category.

Our first scenario is our database profile, which consists of a 67% read and 33% write workload mix primarily centered on 8K transfer sizes. Here, the Ignite posted a QD1 of 6,743.83 IOPS with only 12,524.53 IOPS at in the terminal queue. This placed it last among the consumer SSDs (barely increasing in IOPS after the 4QD) by a significant margin alongside the Corsair drive. 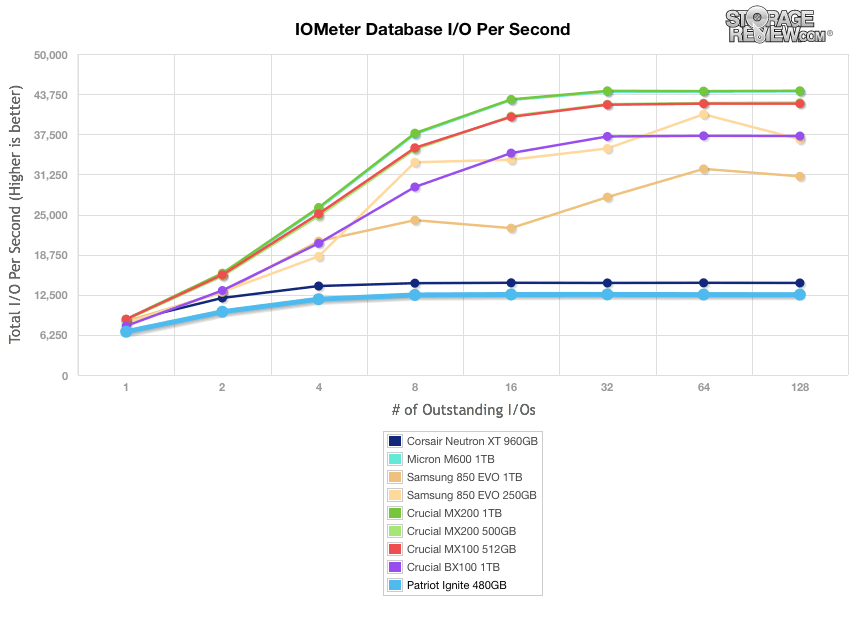 In our file server profile, with 80% read and 20% write workload spread out over multiple transfer sizes ranging from 512-byte to 64KB, we measured the Ignite with a QD1 throughput of 5,278.60 IOPS while 64QD reached 12,152.24 IOPS, which placed it last on our leaderboard. 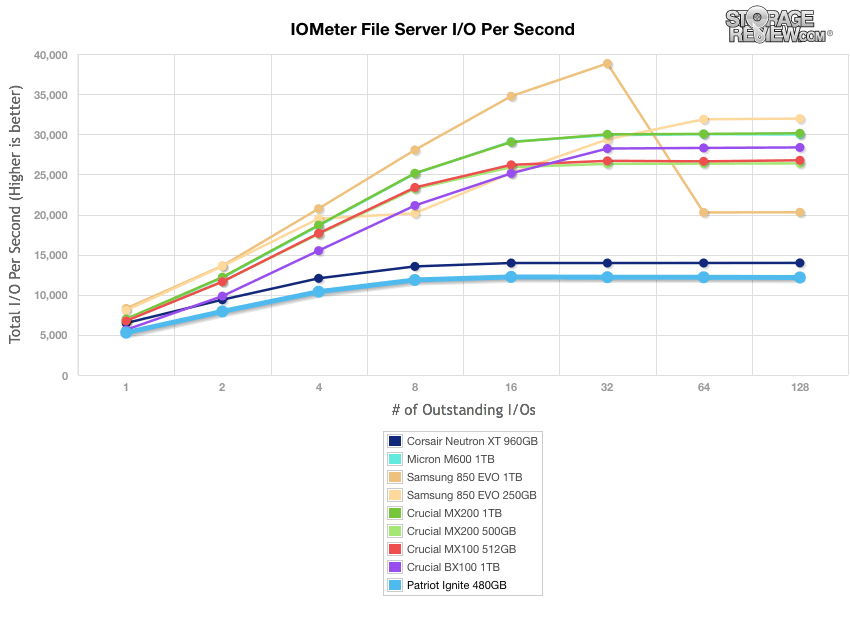 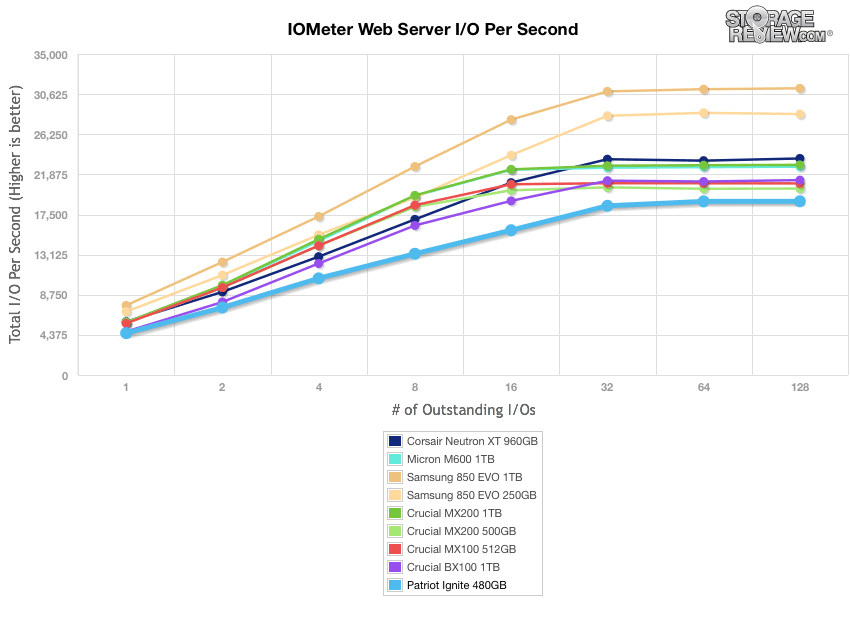 The last profile looks at workstation activity, with a 20% write and 80% read mixture using 8K transfers. Here, the Ignite had poor results again alongside the Corsair SSD, with a range of 6,234.70 IOPS to 14,897.72 IOPS 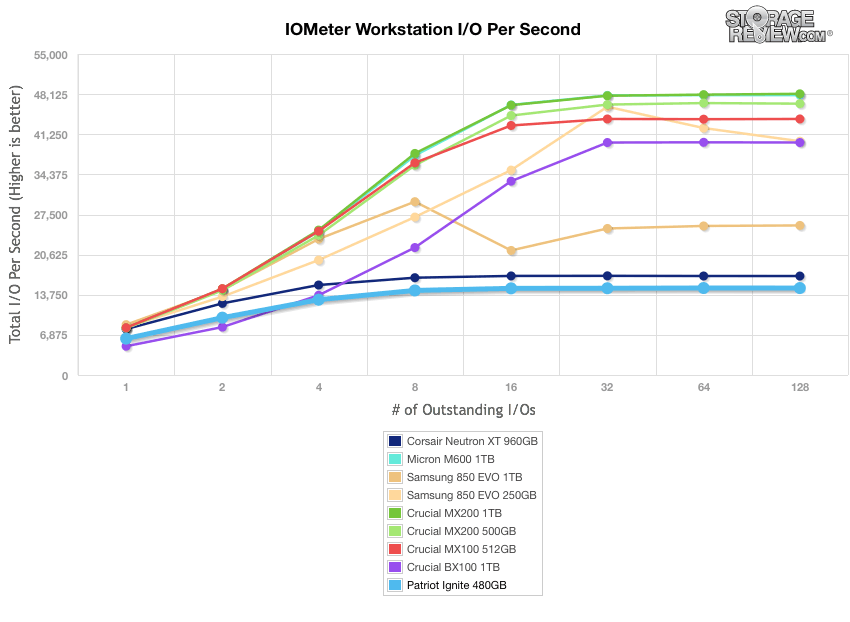 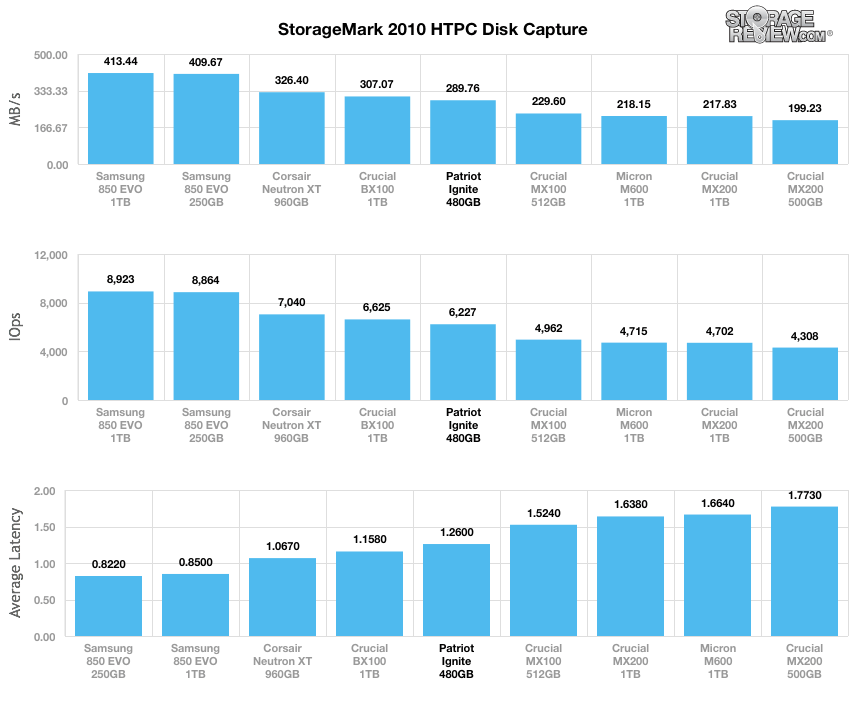 During our Productivity trace, results told a similar story with results from the Ignite SSD that placed it in the middle part of our leaderboard with 127.91MB/s, an IOPS of 4,350.09, and an average latency of 1.818ms. 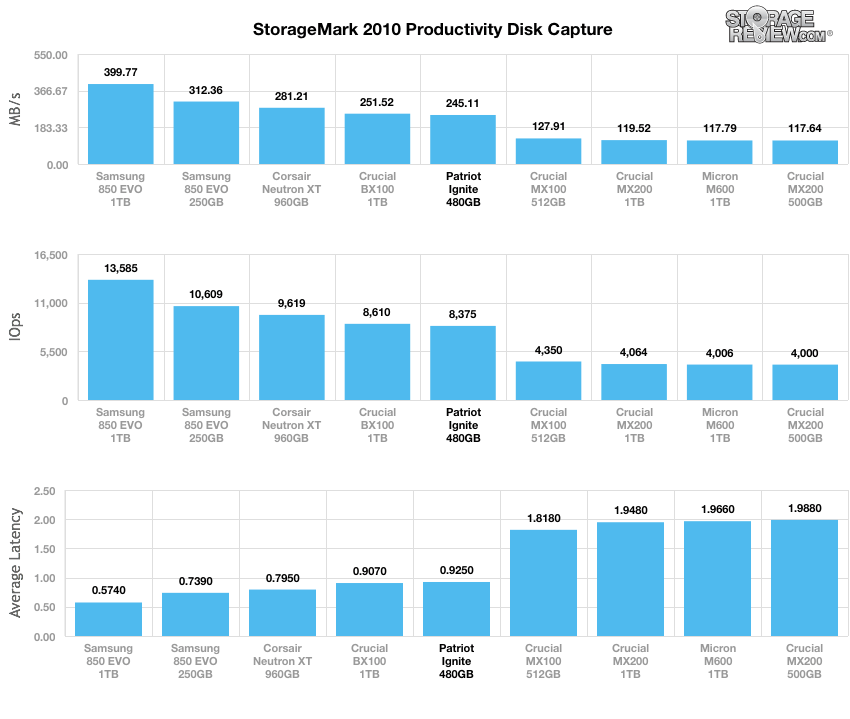 In our read-intensive Gaming trace, the Ignite slowed down considerably with only 354.54MB/s, 6694.24 IOPS, and 1.135ms in average latency. These gaming benchmarks were likely the slowest we’ve seen in recent memory. 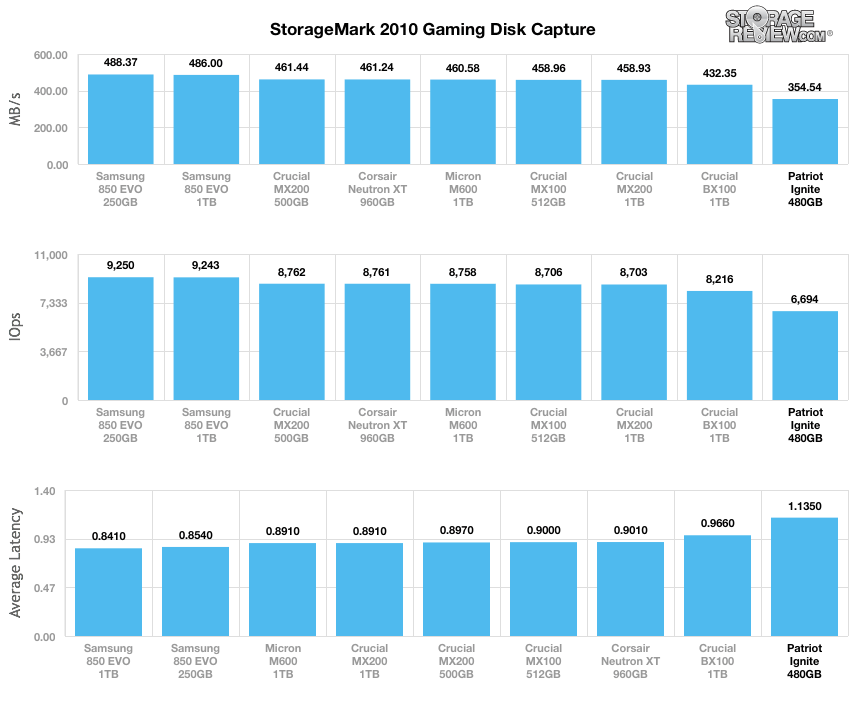 During our power consumption tests, we recorded excellent idle values from the Ignite with 0.388 watts. Its maximum power consumption, however, was a bit above average, which was measured during reading activity with 4.87 watts.

Patriot’s return to the solid-state drive industry after a two-year break was undoubtedly a bit disappointing, as the Ignite drive showed some issues when we put it through the gauntlet of our performance tests. The Patriot Ignite does include some useful functionality with its Phison controller though, including ECC recovery and End-to-End data path Protection. In addition, its Advanced Garbage Collection (which manages used data blocks to help increase SSD performance and endurance) and Advanced Wear-Leveling (an intelligent static and dynamic Wear-Leveling feature, enabling even distribution of flash wear-out) adds value and peace of mind to this drive. The Phison controller also uses SmartFlush technology, which stores the in-flight data on the cache (volatile memory) to ensure that it is safely transferred onto the NAND memory (non-volatile).

As far as the details of its performance, we certainly expected much more from Patriot’s re-entry into the SSD market, as it severely lacked in most of our benchmark profiles. During our 2MB sequential tests, we measured the Patriot drive with a very mediocre 471.73MB/s read alongside a very slow write activity at 146MB/s, which was more than half the speed than the next fastest SSD. The Patriot drive, however, performed much better in our random transfer benchmark of the same file size, posting read and write activity at 465.41MB/s and a leading 482.07MB/s, respectively. When moving to our 4K benchmarks, the only bright spot was the drive’s performance in our 100% write activity workload (scaling from 1QD to 64QD), which measured up to 84,925.20 IOPS during our terminal queue depth. All other 4K profiles saw the Ignite drive near the bottom of our leaderboards as was the case during our server mixed-workloads. The Ignite’s performance did pick up during our consumer real-world benchmarks, as it placed in the middle of the pack in the HTCP and Productivity traces; however, the drive was last place by a significant margin in our Gaming profile.

When it comes down to it, Patriot will likely continue where it left off in having trouble finding ground in the SSD industry. Both capacities also seem a bit too expensive for what the drive is actually capable of performance-wise. For example, the superior Samsung EVO 850 (500GB) goes for roughly $189, while the Patriot Ignite (480GB) has a street price of approximately $200 on Amazon. Patriot really needs to lower this price if they want to stand any chance against the flood of quality, inexpensive solid state drives that are already out there from the big names that own their own fabs. If Patriot does indeed find a way to drive down the cost, the Ignite line may find a niche, especially since they are equipped with some pretty decent reliability features coupled with very low idle power consumption.

Overall the Ignite SSD was a bit of a letdown. However, if Patriot finds a way to lower the price tag below its array of competitors, the Ignite may have potential in finding a demographic that is more motivated by cost than anything else.