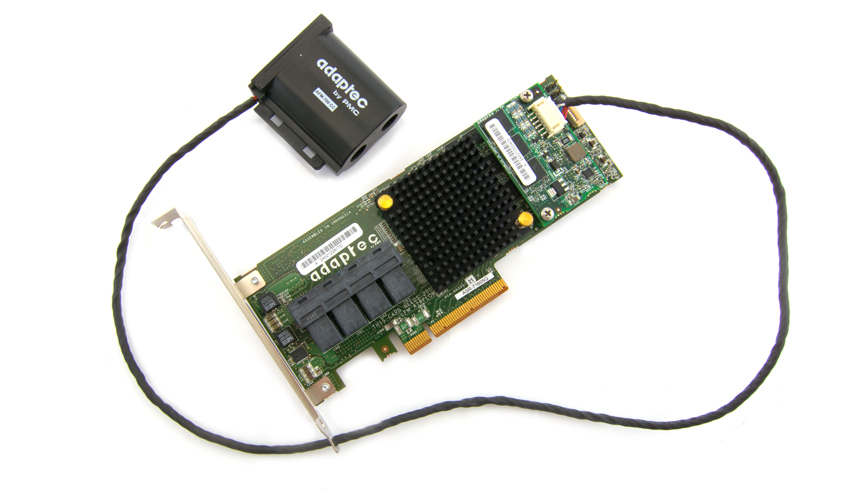 Storage technology is always improving. The current reigning champion is the solid state drive. As pricing continue to fall and capacity continue to climb more and more users find SSDs to be the choice when setting up future datacenters. As much performance as an SSD can throw at a given task, there are still applications out there and more and more being created that need even faster performance than what an SSD can achieve. Organizations are looking for a new tier of memory to give mission critical applications a safety net for their data. This new tier is what PMC is calling the “era of Storage Class Memory.”

The NV1600 Flashtec NVRAM family is aimed to bridge the gap between memory and storage. Mission critical data would be kept on non-volatile memory to help assure that data isn’t loss in the event of a system failure. The NV1600 would be ideal for use as a write cache to deliver super low latency response times, persistent cache for fast cache rebuild, persistent shared memory for scale-out cluster systems, high-performance journaling for write ahead logging, and for a 64-bit addressable persistent meta data memory region.

The NV1604 Flashtec NVRAM is a HHHL PCIe 3.0 add-in card. The device is mainly an exposed circuit board. At the bottom is the PCIe interface. The middle of the device has a heat sink. There are two LED indicator lights near the front to show supercapacitor and activity and one near the back to show power. 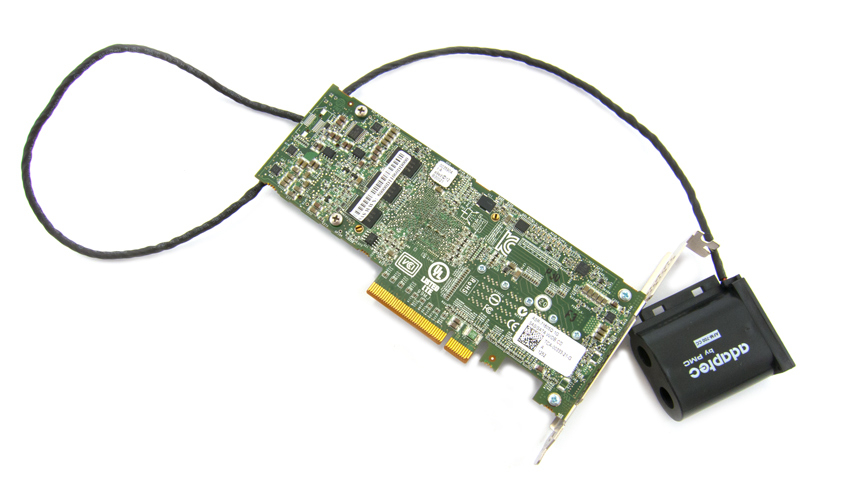 The device also comes with a supercapacitor connected to a port near the front of the card.

Currently we do not have other NVRAM products to compare the NV1600 with. We will be comparing the NV1600 with PCIe AIC form factor SSDs that were all high performers. This won’t be an apple-to-apple comparison as NVRAM is incredibly fast but small capacity whereas PCIe SSDs are 'fast' but much higher working capacities. This is more for showing the type of speeds the NV1600 can produce compared to the next closest technology. Comparables for this review are:

Our Enterprise Synthetic Workload Analysis includes two profiles based on real-world tasks. These profiles have been developed to make it easier to compare to our past benchmarks as well as widely-published values such as max 4k read and write speed and 8k 70/30, which is commonly used for enterprise hardware.

Average latency paints a similar picture as the NV1600 took top spot again with a read latency of 0.24ms and a write latency tremendously faster than all the other devise at 0.20ms, again over three times faster than the Huawei.

With max latency the NV1600 takes the top spot in read speed with 1.64ms five times faster than the next closest, the FlashMAX II. Surprisingly the NV1600 came in second on write speeds at 8.64ms to Mangstor with its write latency of 8.13ms.

Standard deviation saw the NV1600 take second in read latency with a result of 0.163ms (the P420m came in first with 0.089ms though the MX6300 and the Fusion ioDrive2 Duo were both close with the leaders. The NV1600 did come in first in write latency with a speed of 0.090ms or five and a half times faster than the next closest, the MX6300.

Once the drives are preconditioned, the 8k 70/30 throughput benchmark varies workload intensity from 2 threads and 2 queue up to 16 threads and queue of 16. Once again the NV1600 dominated the throughput performance test. The NV1600 started off at 241,592 IOPS, almost ten times higher than the other drives before peaking at 720,463 IOPS. As one can see, none of the other devices even came close. 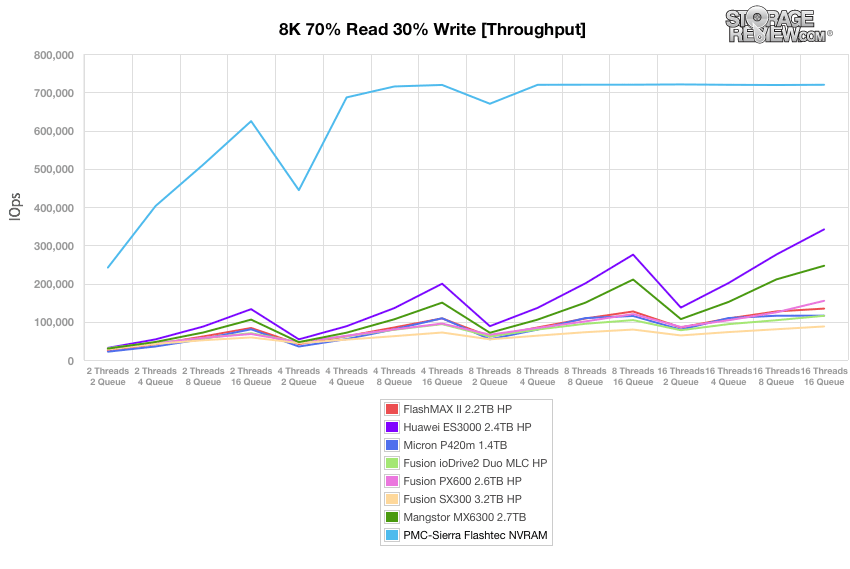 Average latency is another instance of the NV1600 dominating the testing. Throughout our test the NV1600 gave average latencies of less than a 0.1 of a ms, only going over twice-to 0.17ms both times. Once again, not one of the other drives even came close as all of them ran above 0.1ms throughout. 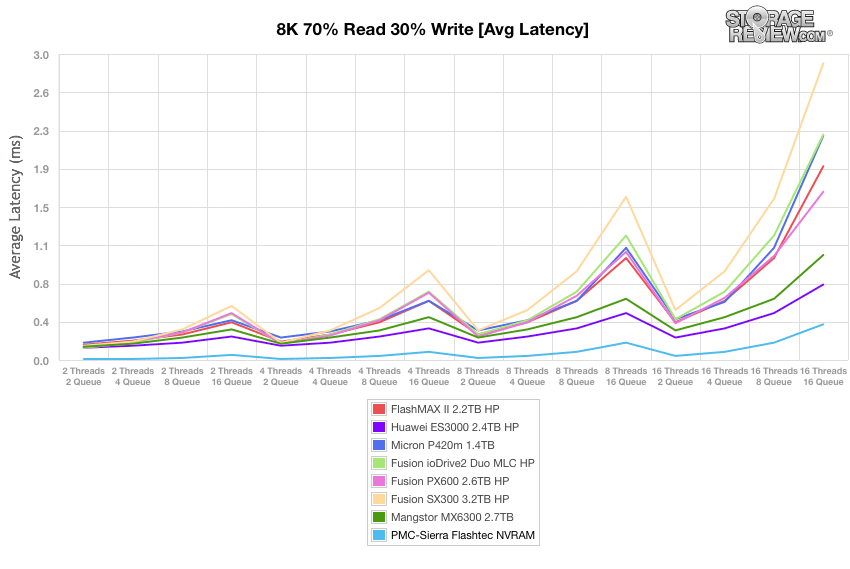 Max latency saw good performance from the NV1600 especially in the terminal depth, however it did have higher latency than some of the other devices throughout testing. 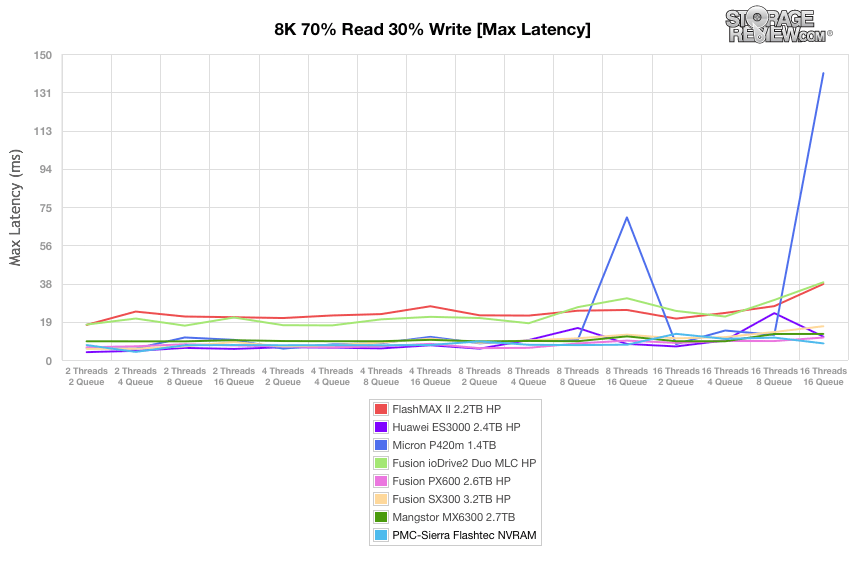 Standard deviation saw the NV1600 regain its throne and give the lowest latency performance as well as the most consistent performance. 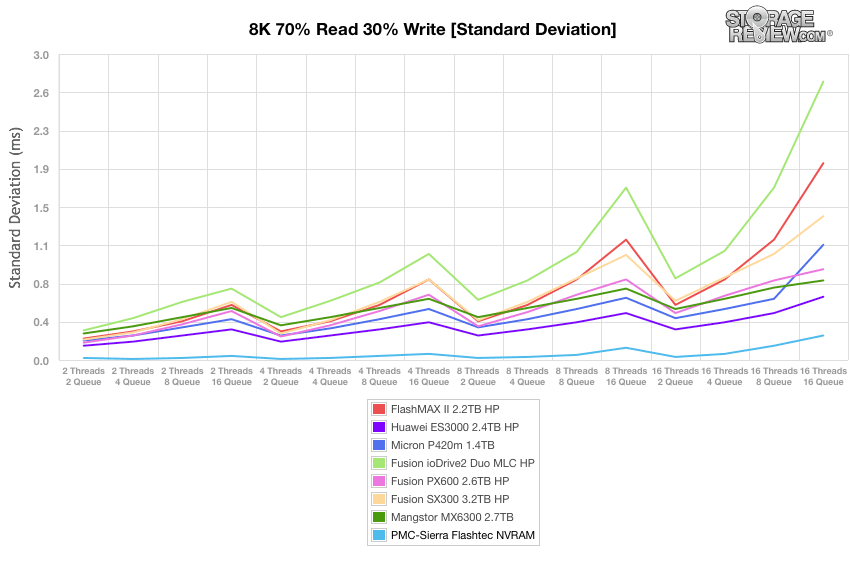 The new NV1600 Flashtec family from PMC is designed to be a new tier of storage that sits between memory and storage. The family is non-volatile memory drives that use NVMe interface through PCIe. The drives deliver extremely high performance and sub-microsecond latency as well as near unlimited endurance. Currently the drives are offered in three capacities, 4GB, 8GB, and 16GB. The new family of drives is aimed at Storage System OEMs and Cloud Applications and Service Providers.

Looking at performance, the NV1600 gave us the highest throughput numbers we’ve seen thus far from a single device with a 4k throughput of 1,080,500 IOPS read and 1,247,600 IOPS write, and our 8k 70/30 throughput saw a peak of 720,463 IOPS. With average latency on both sets of tests the NV1600 again took the lead with no real competition from the other devices. The only time we saw the NV1600 not take the top spot was in some of our max latency tests where other drives slightly edged it out, though the NV1600 still delivered great performance here as well.

The PMC NV1600 Flashtec family delivers record setting performance as it defines itself as a new tier of storage.