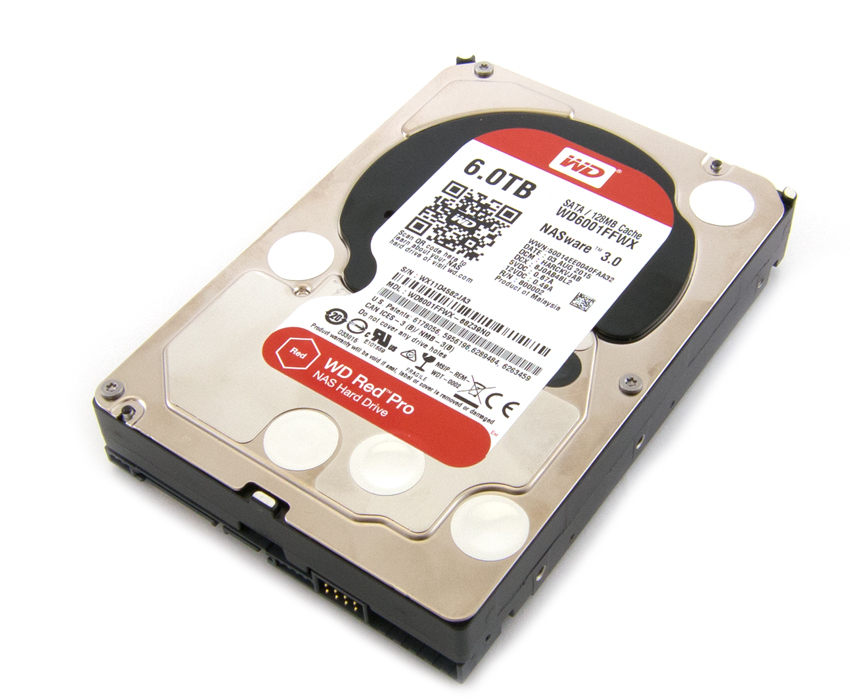 The WD 6TB Red Pro is aimed at organizations that need generous amounts of capacity in their larger NAS devices. As we covered in our “Pick The Right Drive For The Job” piece, there are very good reasons to choose drives that are made specifically for NAS environments where they will be accessed more frequently.  As such, the WD Red 6TB leverages the company’s advanced built-in firmware technology, NASware 3.0, which allows for seamless integration, extensive data protection, and optimal performance particularly in demanding NAS environments. Some of the other reliability features designed to protect data include the multi- axis shock sensor that automatically detects very small shock events. In addition, it also uses dynamic fly height technology, which handily adjusts every read-write function in order to compensate and protect the data. 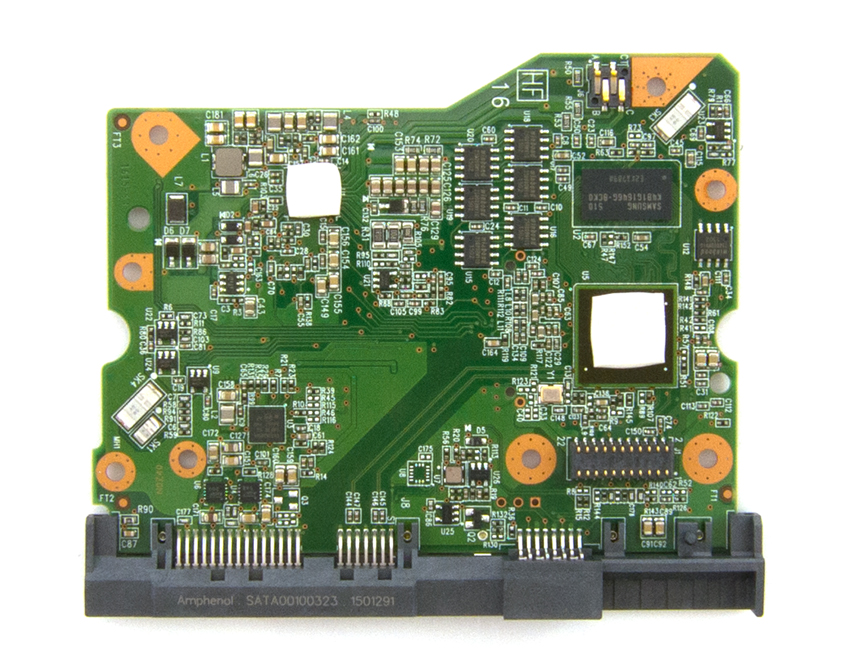 Backed by a 5-year warranty, the WD Red Pro HDD comes in capacities of 6TB, 5TB, 4TB, 3TB and 2TB, which allow it to address a variety of use cases.

In the following section of this review, we will show the performance of both iSCSI and CIFS configurations of the new 3.5″ WD Red Pro 6TB HDDs. WD supplied StorageReview with 8 samples of their new HDDs, which we configured in RAID10 in our Synology DiskStation DS1815+.

We will compare it to the WD Red 6TB (non-Pro) model from the WD line.

Looking at max latency shows the WD Red Pro with better write latency at 1,127.1ms, though reads were slower than the non-Pro model, which boasted 894.9ms (compared to the Pro’s 945.6ms).

The WD Red 6TB drive posted 1,792.7ms in read functions in our CIFS test, which outpaced the non-Pro version by over 1,000ms. In write latency, however, the WD Red showed the best results with 1,677.8ms.

Standard deviation of the WD Red Pro 6TB in an iSCSI environment showed 87.645ms read and 127.90ms write to demonstrate its consistency. This was a great improvement on the non-Pro model, which measured 279.93ms write and 103.49ms read.

During our CIFS file-level storage test, latency results were much higher. The WD Pro model posted 362.69ms read and 135.75ms write while the non-Pro drive had a significantly slower 755.84ms read and a 158.81ms write.

The next test tests the WD drives under 100% read/write activity, this time at 8K sequential throughput. In iSCSI, the WD Pro boasted its top read performance of 28,110 IOPS; however, its write speeds were significantly lower than the non-Pro model, which boasted 24,439 IOPS write (vs. the Pros 13,713 IOPS).

Our next test shifts focus from a pure 4K random read or write scenario to a mixed 8K 70/30 workload where we will show how performance scales in a setting from 2T/2Q up to 16T/16Q. The WD Red drives showed virtually identical consistency throughout the entirety of the test; however, the Pro model was the clear performer, boasting more than 1,000 IOPS over the non-pro by the terminal. 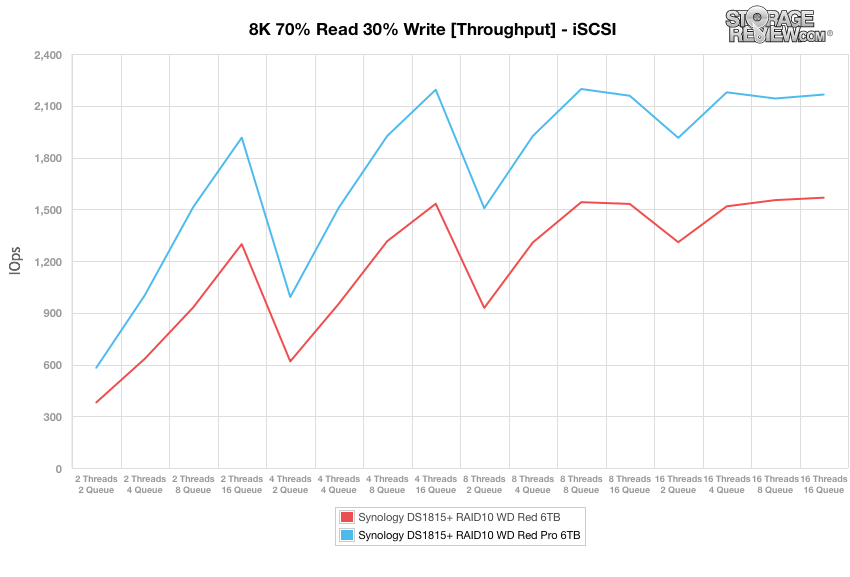 Looking at throughput in CIFS, though the drives boasted significantly less IOPS, it showed a much more consistent level of performance. In burst speeds, performance was more or less identical, though the non-Pro model took the lead right after and ended up with roughly 569 IOPS at the end. 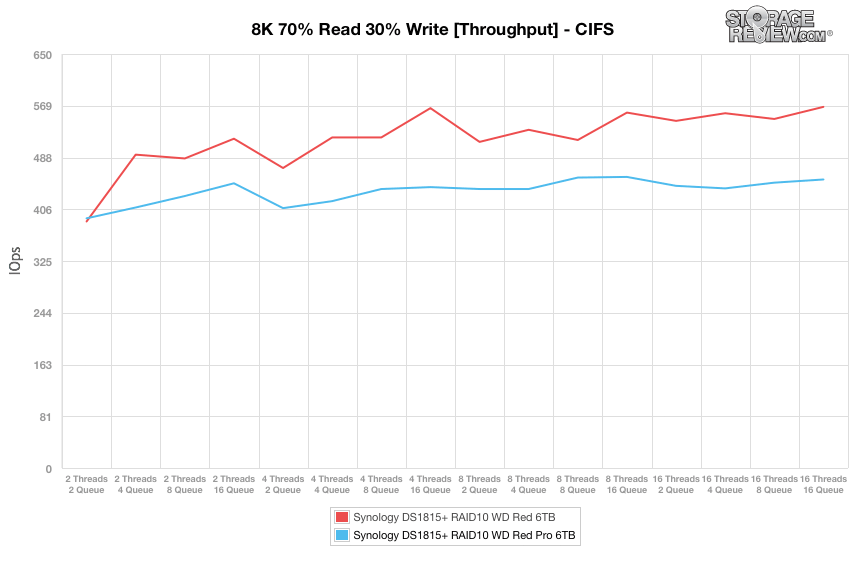 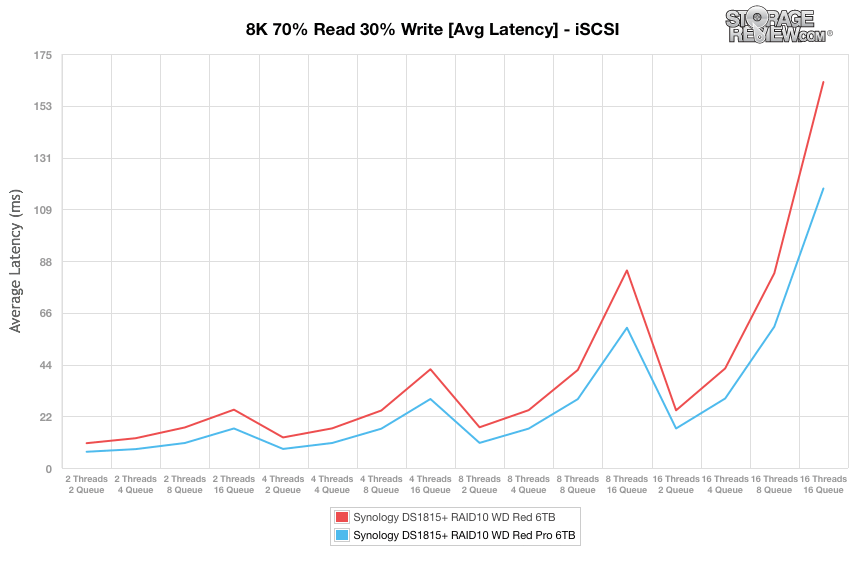 When looking at average latency during our CIFS test, results were also near identical (even more so) with the non-Pro model edging out the WD Red Pro with just over 50ms in the terminal queue depths. 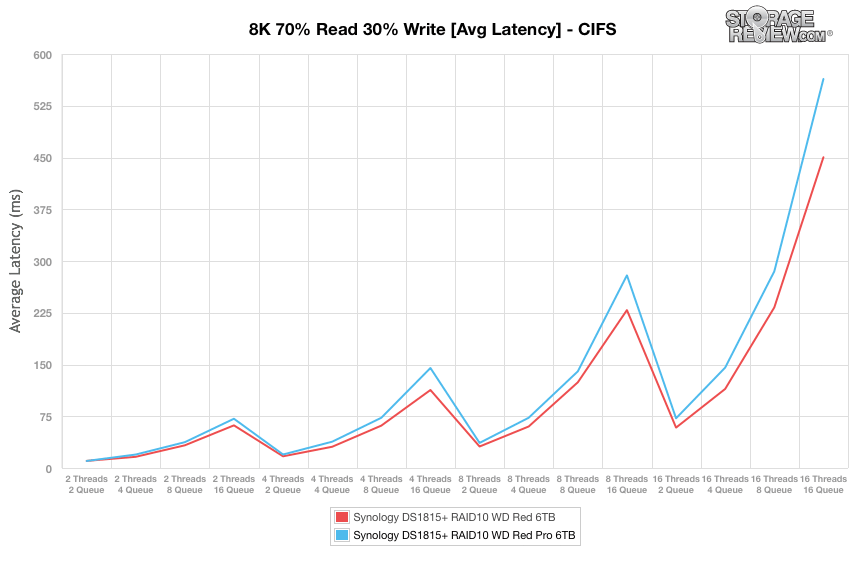 Moving to max latency (iSCSI), both drives showed inconsistent results; however, the Pro-model had a lower latency throughout the majority of the test with approximately 1,300ms in peak latency. 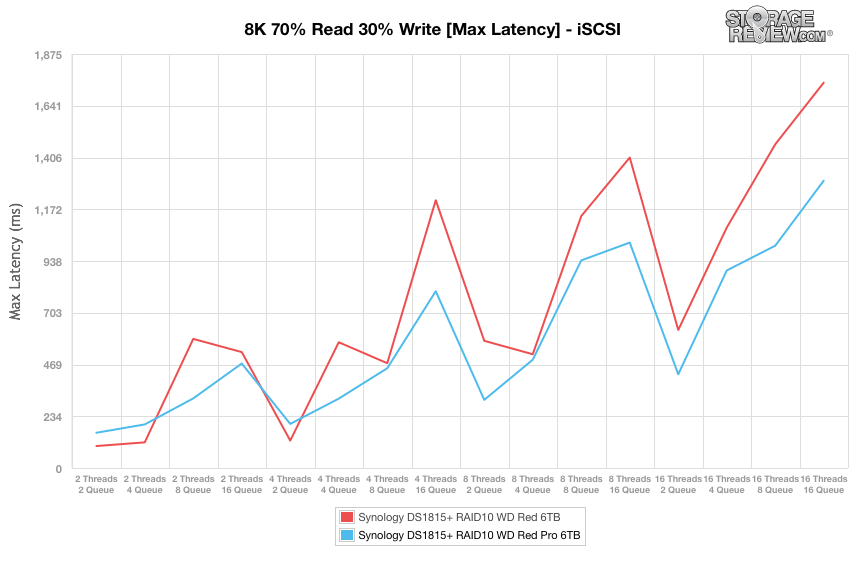 In CIFS, results were also fairly inconsistent across the board; though the performance discrepancy was much more pronounce between the two drives. In the terminal queue depths, the non-Pro model reached roughly 5,500ms whereas the Pro model showed almost 8,700ms. 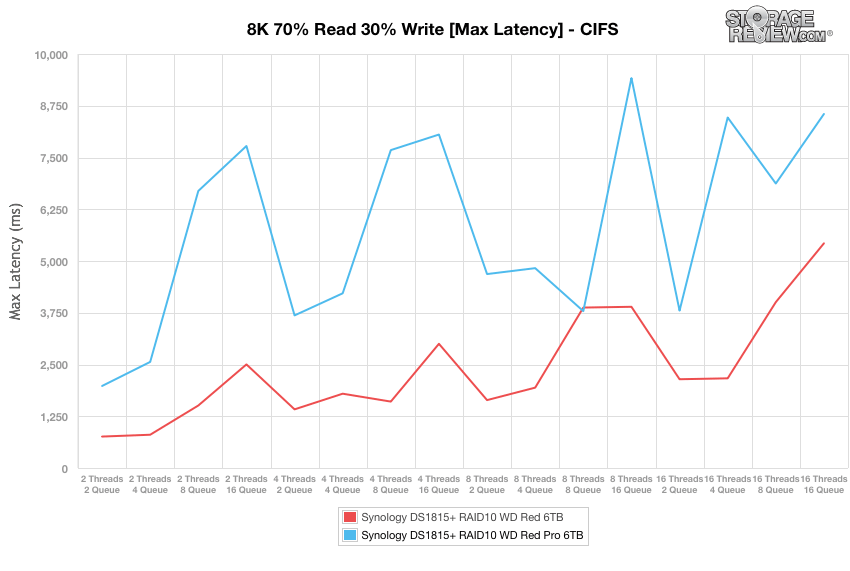 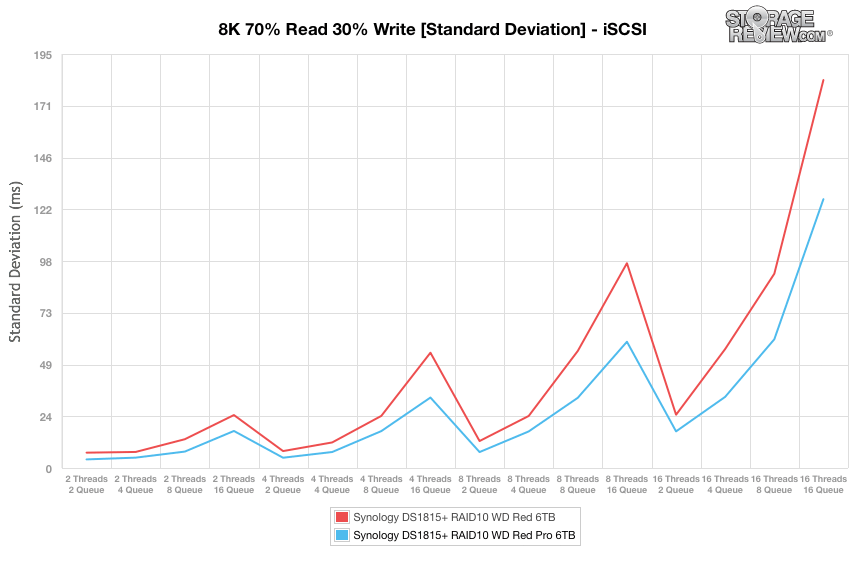 Results were a little bit closer in standard deviation during our CIFS file-level storage test, as performance went back and forth in the second half of our queue depths. By the end, the WD Pro had the better performance with just under 438ms in latency (compared to the non-Pro’s ~480ms). 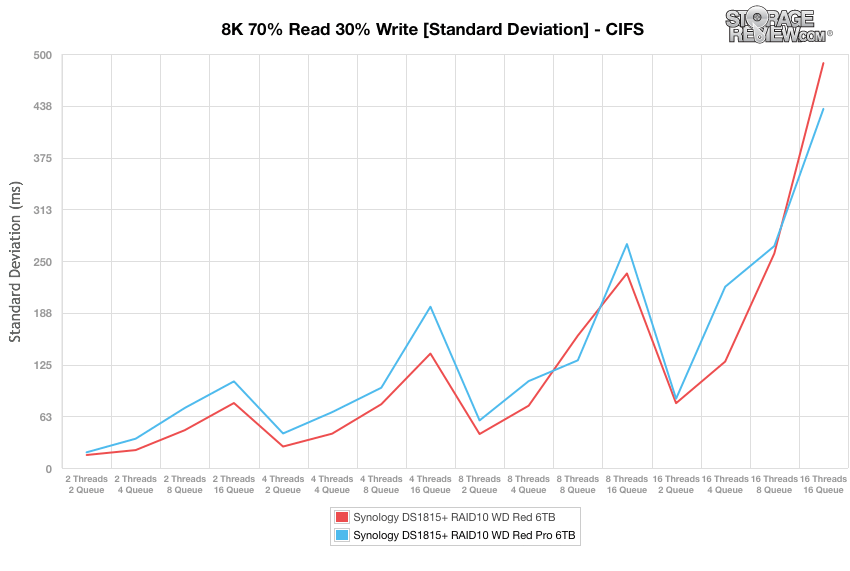 Our last test looks at large-block sequential performance. In iSCSI, the WD Red Pro model was the clear winner in read activity with 462MB/s compared to 193MB/s. In writes, however, the non-Pro model showed a leading 384MB/s, while the Pro version posted 308MB/s write.

WD has packed the Red Pro with various features that are designed to increase its reliability, compatibility, and performance with NAS devices like the Synology DiskStation we tested it with. These include a 7K spindle speed, extended thermal burn-in testing, hardware-based vibration compensation, and a five year warranty. In addition, the Red Pro drives feature NASware version 3.0, WD’s hard drive firmware designed specifically for NAS solutions.

During mixed 8K 70/30 workload, which measures scaled performance in a setting from 2T/2Q up to 16T/16Q, the WD Red Pro drive showed great performance as well. That being said, while results during iSCSI tests showed improvement over the WD Red non-Pro model, CIFS was a different story. Here, the WD Red had better results; sometimes by a significant margin, such as with max latency. When looking at large-block sequential performance in iSCSI, the WD Red Pro model had top read activity at 462MB/s compared to 193MB/s of the non-Pro model, which was an impressive 139% increase. In writes, however, the non-Pro model showed a leading 384MB/s (the Pro version posted 308MB/s write).

Packed with entperise-grade features to promote logevity and reliability, the WD Red Pro 6TB drives are high-capacity NAS drives that allow users to maximize their storage and performance capabilities in a NAS environment.