Designed for home and SOHO users, the QNAP TS-451+ is a 4-bay, high-performance NAS compatible with the latest QTS 4.2 interface. The TS-451+ can scale up to 12 drives (which amounts to a respectable 72TB in raw storage) using the QNAP UX-800P expansion enclosures, making it ideal for data backup, file synchronization and sharing, remote access and multimedia applications. It also has the ability to create a secure private cloud for quick and efficient data access.

Designed for home and SOHO users, the QNAP TS-451+ is a 4-bay, high-performance NAS compatible with the latest QTS 4.2 interface. The TS-451+ can scale up to 12 drives (which amounts to a respectable 72TB in raw storage) using the QNAP UX-800P expansion enclosures, making it ideal for data backup, file synchronization and sharing, remote access and multimedia applications. It also has the ability to create a secure private cloud for quick and efficient data access. 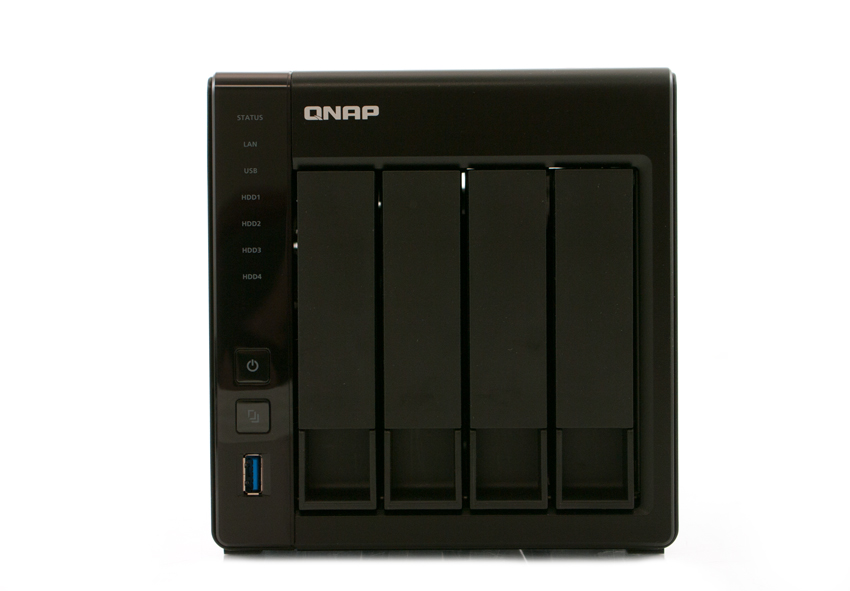 At the heart of the TS-451+ is the 64-bit Intel Celeron quad-core 2.0GHz processor and is available in a 2GB (TS-451+-2G) and 8GB (TS-451+-8G) DDR3L RAM models. Coupling this with dual gigabit LAN ports allows QNAP to quote their NAS to deliver upwards of 225MB/s in both read and write speeds via port trunking mode. In addition the TS-451+ automatically increases the processor’s clock rate from 2.0GHz to 2.42GHz during CPU-intensive tasks, which is handy for media professionals. When using AES 256-bit volume and folder encryption, transfer speeds can reach up to 204MB/s, allowing for decent performance all the while ensuring the safety of sensitive data.

Using QNAP’s QvPC Technology, the TS-451+ can also be used as a cost-effective PC with just a keyboard, mouse and HDMI monitor. Users will have direct access to any stored data and will have the ability to run multiple applications using Windows/Linux/UNIX/Android-based VMs, browse the Internet, monitor live surveillance feeds from IP cameras, and more.

The ruggedly built QNAP TS-451+ has an all-metal frame with a sleek look. The NAS is branded with the company logo at the top left and is comprised of a tower form factor with a black plastic chassis cover. The front of the NAS gives access to the four hotswappable drive bays. On the left side of the NAS are the LED Indicators including the Status, LAN, USB, and four HDD LEDs. 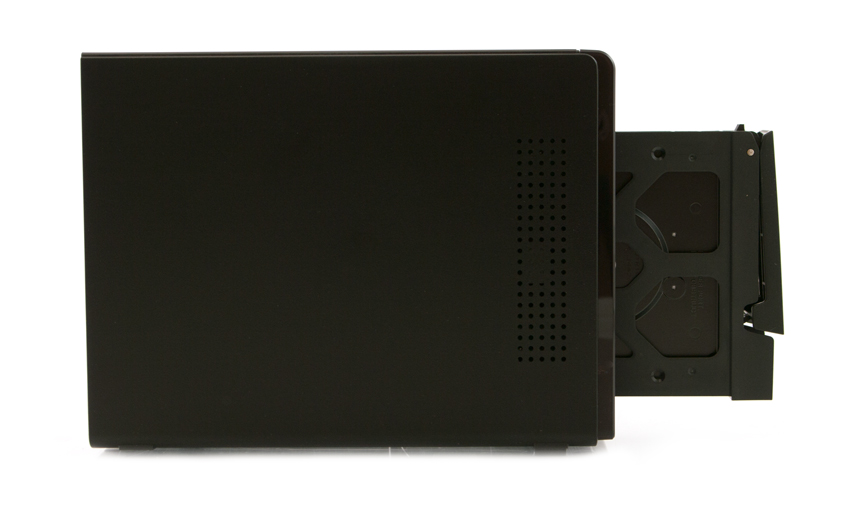 At the bottom left are the Power and USB Auto Copy buttons and a USB 3.0 port. 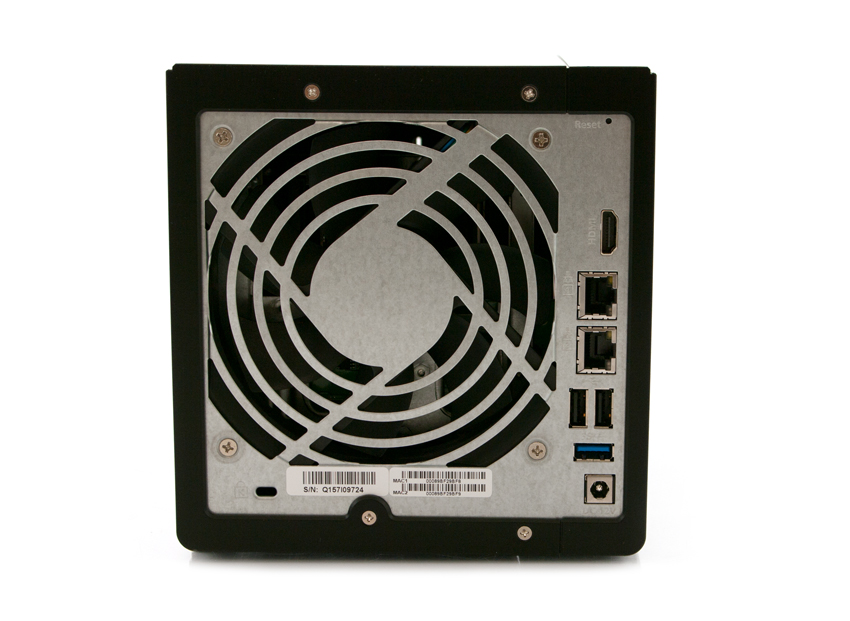 The back panel is host to a large fan that takes up the vast majority of the real estate. Also present is the HDMI port, dual gigabit LAN ports, two USB 2.0 and one USB 3.0 ports, and the Power port.

We tested both CIFS and iSCSI TS-451+ performance using RAID 10 configurations using the WD Red NASware 3.0 6TB drives, which we will be comparing it to QNAP’s TVS-463 NAS solution using the same drive type and configuration.

Our standard StorageReview Enterprise Test Lab regimen runs the device through its paces with a battery of varying performance levels and throughput activity workloads. This includes:

Our first benchmark measures the performance of random 4k transfers comprised of 100% write and 100% read activity. Here, the TS-451+ posted its best read throughput of 1,528 IOPS during the iSCSI test, while CIFS showed the best write performance with 1,724 IOPS (which had a much lower read throughput of 283 IOPS). In comparison, the results of the TS-451+ were slightly edged out by the TVS-463.

The maximum latency showed top performance of the TS-451+ during the iSCSI block-level test with 2,561.1ms read and a leading 515.9ms in writes.

When looking at our standard deviation readings of the 4k test, the TS-451+ boasted some good performance under iSCSI connectivity with 129.91ms read and 118.09ms write.

The next test again puts the drives under 100% read/write activity, this time at 8K sequential throughput. Here, the TS-451+ showed boasted its top read and write performance under iSCSI with 28,669 IOPS read and a near identical 28,667 IOPS write.

Compared to the fixed 16 thread, 16 queue max workload we performed in the 100% 4k write test, our mixed workload profiles scale the performance across a wide range of thread/queue combinations. In these tests, we span workload intensity from 2 threads and 2 queue up to 16 threads and 16 queue. Looking at throughout, the TS-451+ and the TVS-463 showed neck and neck performance with the iSCSI connectivity until the end where the latter pulled away; however, CIFS certainly showed that it was the most consistent performance of all configurations and NAS devices. 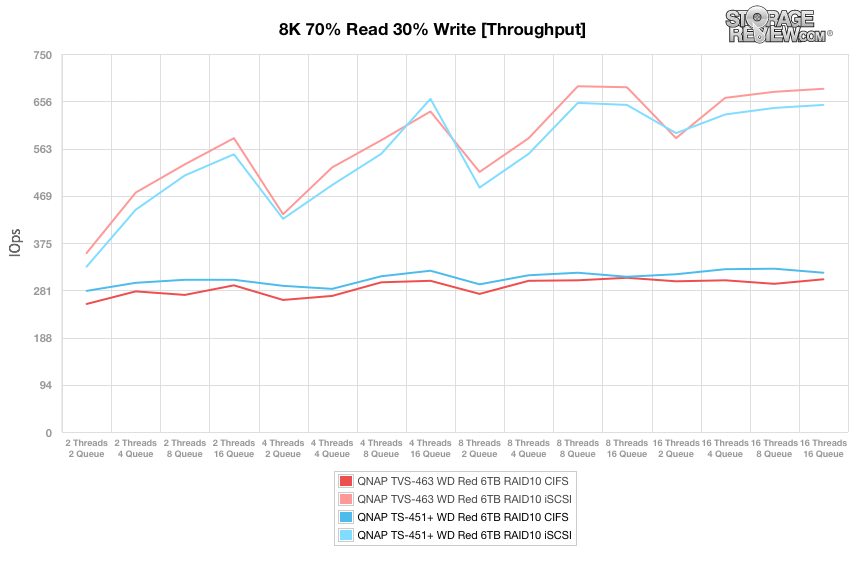 With average response times, we see near identical performance between each NAS device and their respective connectivity. The iSCSI block-level test showed the best performance for both NAS solutions, with the TS-451+ peaking at just over 400ms at 8T/16Q. 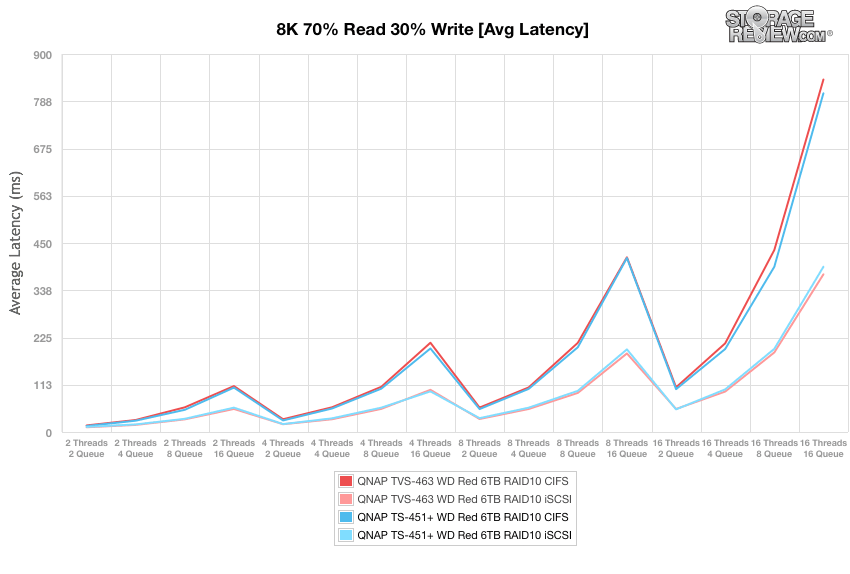 Looking at max latencies showed inconsistent results across the board. The TS-451+ had the best overall performance when leveraging iSCSI with the Samsung drives. Generally speaking the best performing NAS was the TS-451+ via iSCSI, which peaked at around 3,650ms in the terminal. 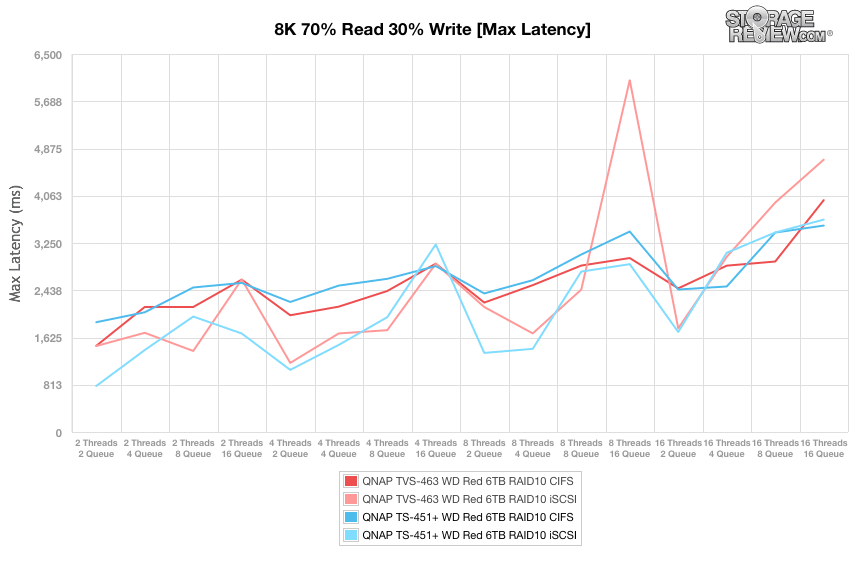 Standard deviation gave us very similar results to average latency, with both QNAP NAS models posting their best performance during the iSCSI block-level test with near identical latency. 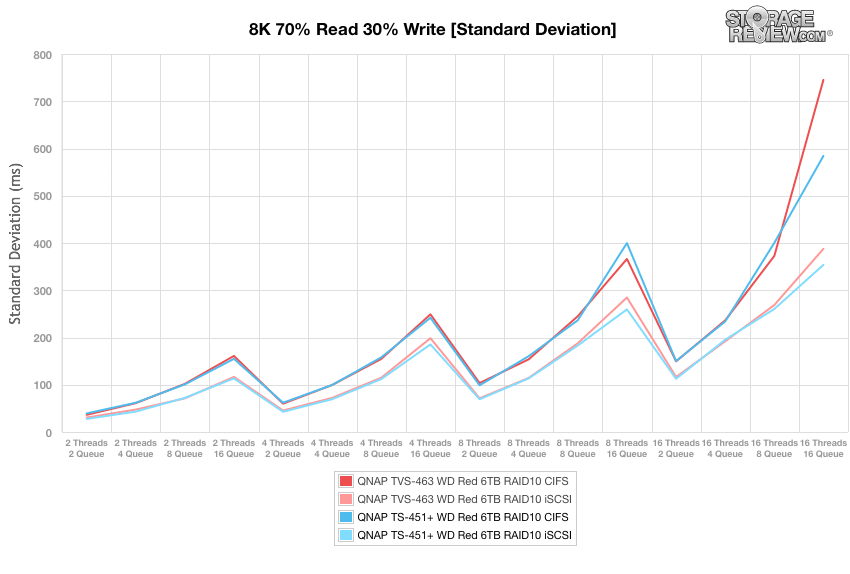 Our last workload in our small NAS Synthetic Workload testing consists of the 128k test, which is a large block sequential test that shows the highest sequential transfer speed. When looking at the 128k performance of 100% write and 100% read activity, the TS-451+ boasted very similar results in both iSCSI and CIFS with a top read speed of 231MB/s (CIFS) and a top write speed of 231MB/s (iSCSI). That being said, both speeds were significantly lower than the TVS-463, which boasted well over four times the speed in reads.

The QNAP TS-451+ is an affordable (yet versatile) 4-bay tower NAS powered by 64-bit Intel Celeron quad-core 2.0GHz processor and 4GB of energy-efficient DDR3L RAM, which is expandable up to 8GB. Its total raw storage capacity is capable of reaching up to 72TB with the ability to scale up to 12 drives when leveraging the QNAP UX-800P expansion enclosures. It also comes equipped with a variety of useful connectivity options including, 4 USB ports (two USB 2.0 and two USB 3.0), one HDMI ports, all of which allow users to use the NAS as a PC when leveraging QNAP’s QvPC Technology. It’s quick and easy: simply plug in a monitor via HDMI, and the keyboard, and mouse through USB, and you can use the NAS via HybridDesk Station. This is very handy for people with use cases such as surveillance or for those who just want to browse the web. In addition, it’s compatibility with QTS 4.2 provides a powerful NAS user interface with a plethora of useful multimedia, storage, virtualization and data security features.

To measure its performance, we tested both CIFS and iSCSI protocols using RAID 10 configurations leveraging the WD Red NASware 3.0 6TB hard disk drives. For our 4k tests, we saw throughput as high as 1,528 IOPS read during the iSCSI test, while CIFS showed the best write performance at 1,724 IOPS. When looking at average latency the TS-451+ showed 167.51ms read and 149.58ms write (iSCSI), which was just behind the TVS-463’s 162.04ms read and 165.31ms write.

Our sequential 8k test showed a top read and write performance under iSCSI with 28,669 IOPS read and a virtually identical 28,667 IOPS write. Lastly, our large block sequential benchmarks showed maximum read speeds of 231MB/s (CIFS) and a top write speeds of 231MB/s (iSCSI). Overall, this is a very versatile and scalable NAS solution that boasted some pretty good performance especially during our block-level iSCSI tests despite just using HDDs.

Catered towards home and small offices, the QNAP TS-451+ is an affordable and versatile 4-bay tower NAS that offers users plenty of power, useful functionality, and QTS 4.2 compatibility.