QNAP Systems is continuing to expand its QuTS hero line with the QNAP TS-h2490FU NAS. This 2U, rackmount NAS is more performance-oriented with a second-gen AMD EPYC CPU and all NVMe flash storage. Being a “hero” NAS, it is ZFS-based, that while lending itself to more enterprise features, it tends to pull overall performance down. Today we’ll look at how a ZFS-based system does with higher-performance storage after a recent review of QuTS on SATA drives.

QNAP Systems is continuing to expand its QuTS hero line with the QNAP TS-h2490FU NAS. This 2U, rackmount NAS is more performance-oriented with a second-gen AMD EPYC CPU and all NVMe flash storage. Being a “hero” NAS, it is ZFS-based, that while lending itself to more enterprise features, it tends to pull overall performance down. Today we’ll look at how a ZFS-based system does with higher-performance storage after a recent review of QuTS on SATA drives. 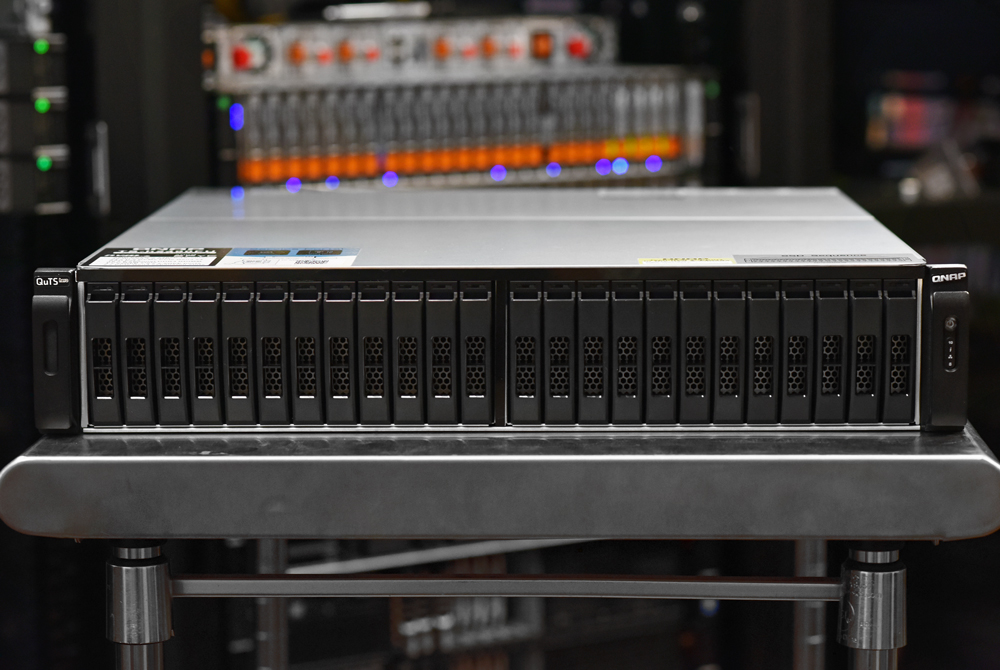 Speaking of components, the hardware of the QNAP TS-h2490FU including an AMD EPYC 7302P (16-core) processor, up to 256GB of DDR4 ECC memory (depending on model), and 24 NVMe SSDs. The NAS can be configured with up to four 25GbE ports. There are also five PCIe expansion slots for adding other connectivity, storage, or other accessories. This hardware, QNAP claims performance numbers of 472K IOPS read and 205K IOPS write with very low latency common with NVMe storage. With sequential work, the NAS claims 14GB/s read and 10.5GB/s write with deduplication off.

As we stated previously, QuTS hero is a combination of the app-based QTS with a 128-bit ZFS file system. QuTS hero is aimed specifically at the QNAP business line of NAS. The OS comes with inline deduplication, inline compression, and inline compaction to help better utilize storage resources. The ZFS nature of the OS allows for self-healing to better boost reliability and maintaining data integrity. While conventional RAID configurations are supported, QuTS hero also supports RAIDZ.

The QNAP TS-h2490FU is a 2U, rackmount NAS. Across the front of the device are the 24 2.5” drive bays. At the top of each bay are LED indicator lights. Off to the right are the power button as well as indicator LEDs for 10 Gigabit Ethernet, System staus, 2.5 Gigabit Ethernet, and the expansion unit, if used. 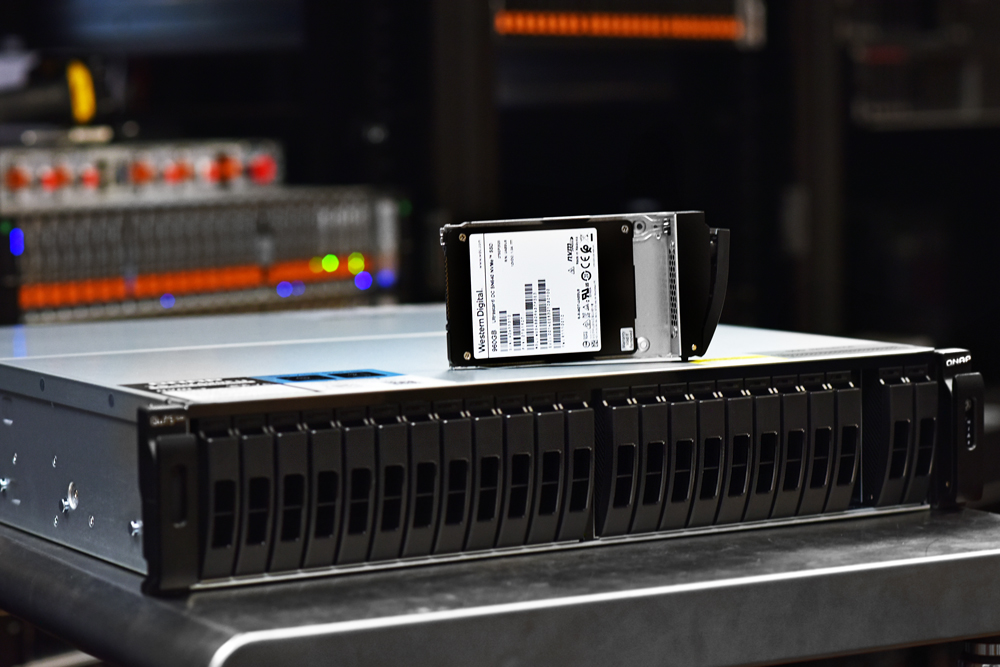 The rear of the devices is largely taken up by ventilation. Depending on the setup, on the left, there are four 25GbE SFP28 Ethernet ports. On the bottom left are two USB 3.2 Gen1 Type-A ports, a power button, and a reset button. Following along on the bottom we see a Com port, two 2.5GbE Ethernet ports, three PCIe expansion slots, and two PSUs on the right. 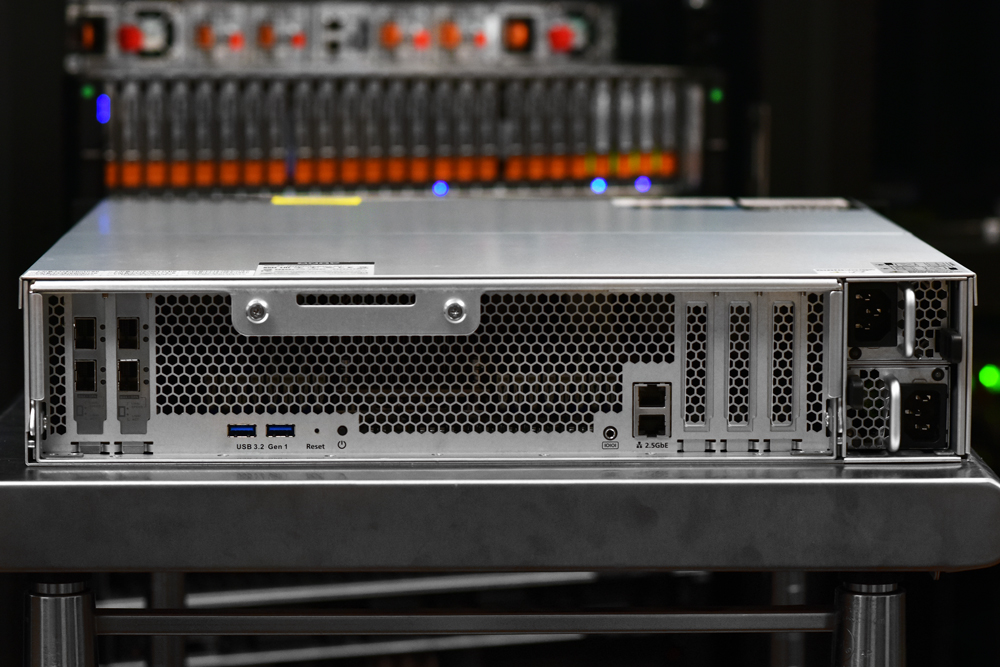 Opening up the NAS we see the AMD EPYC CPU near the rear. We can access more PCIe slots as well. 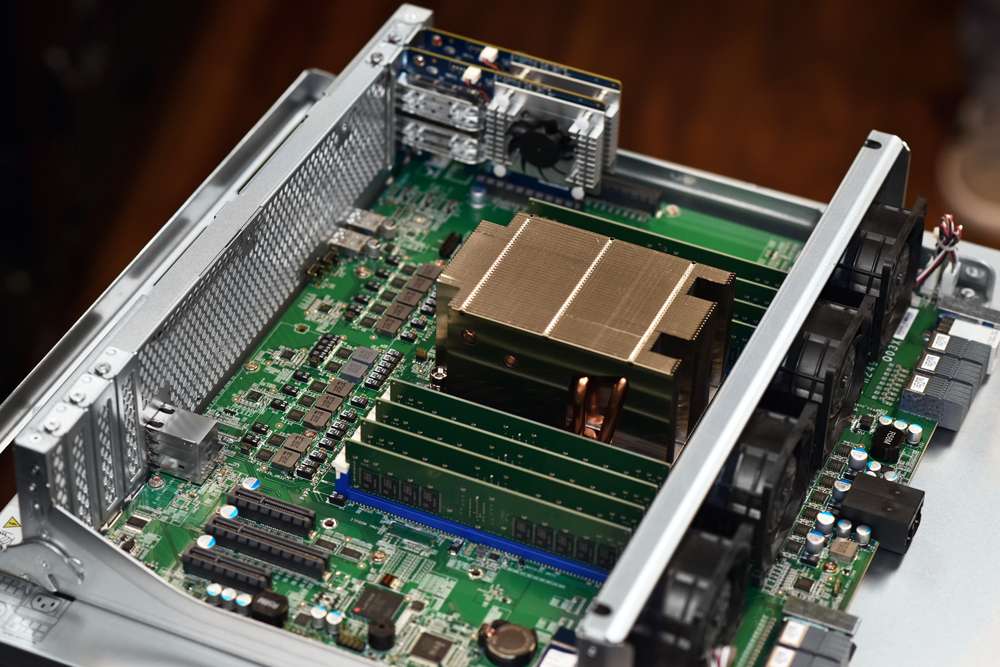 The ZFS-based QuTS hero operating system is designed specifically for QNAP’s business line of NAS solutions, highlighted by its combination of the app-based QTS with a 128-bit ZFS file system. This allows QNAP to offer flexible storage management as well as inline deduplication, inline compression, and inline compaction. This helps to provide more effective use of storage resources while promoting self-healing to increase reliability and maintain data integrity.

For example, QuTS hero supports near-limitless snapshots (up to 65,535 snapshots for iSCSI LUN) and shared folders. Moreover, its use of copy-on-write technology makes snapshots extremely fast and will not affect ongoing data transmission. 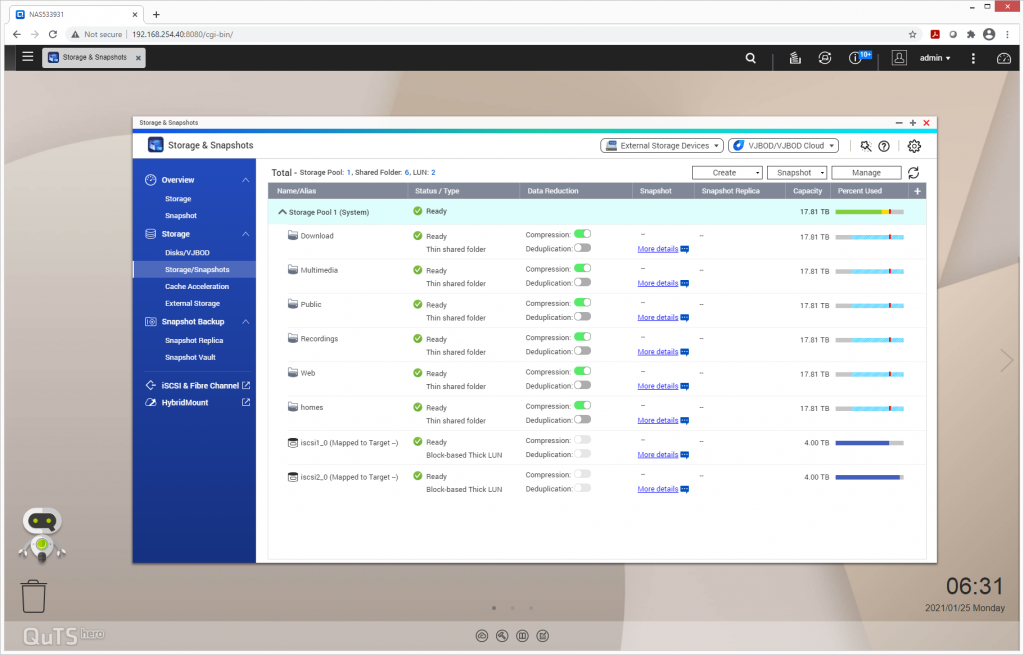 We tested the QNAP TS-h2490FU using a RAID50 configuration, populating the system with 24x WDC Ultrastar DC SN640 NVMe SSDs (960GB). In networking, we ultimately leveraged 10GbE through the four SFP+ ports in the rear. We couldn’t get the NICs to establish a 25GbE connection to our Dell Z9100 switch and fanout cables, while it did negotiate and connect when routed through 10GbE cables. In practice though while this may limit peak sequential workloads, it won’t have an impact on mixed workloads that operate well under that threshold.

With the Sysbench OLTP, we saw an aggregate score of 3,174 TPS for 4VMs.

With Sysbench average latency, the QNAP TS-h2490FU recorded an aggregate score of 40.31µs for 4VMs.

For our worst-case scenario latency (99th percentile) the QNAP TS-h2490FU had an aggregate score of 480.35µs for 4VMs.

For random 4K write, the server began 18K IOPS with 407μs, remaining with this latency until a little bit after the 10K IOPS mark, where it gradually reached over 35,000µs while peaking at 20,913 IOPS.

The QNAP TS-h2490FU is the latest addition to the company’s QuTS hero line. Sporting a 2U form factor, QNAP states that it is designed more for performance, as it is highlighted by its AMD EPYC 7302P (16-core) processor and all NVMe-flash storage. In addition, this enterprise-grade NAS uses the newer ZFS-based OS (which provides users with inline deduplication, inline compression, and inline compaction), and features up to a generous 256GB of RAM, 24 NVMe SSD bays, and onboard 25GbE SFP28 and 2.5GbE RJ45 connectivity. Users can also leverage the five PCIe expansion slots to further expand the capabilities of the TS-h2490FU, including additional connectivity, storage, and other accessories.

For performance, we ran our Enterprise Synthetic Workload Analysis and tested the TS-h2490FU in a RAID50 configuration, populating the system with 24x 960GB WD Ultrastar DC SN640 NVMe SSDs. First up is was our Application Workload Analysis, where we saw an aggregate of 96.5µs at 2VMs and 272µs at 4VMs for SQL Server average latency. With Sysbench, we saw transactional aggregate scores for 4VMs give us 3,174 TPS, while average latency and worst-case scenarios aggregate scores recorded 40.31µs and 480.34µs, respectively.

Overall, the performance was somewhat uneven at times for a 24 NVMe storage configuration, as the TS-h2490FU seemed to have a bit of trouble reaching higher numbers during our tests. With the assortment of 24 NVMe SSDs, we had expected to see higher random transfer numbers and mixed workloads, but this is an area where we’ve seen limitations from ZFS-based platforms in the past. That said, it’s nice to see a QNAP system that supports an all-NVMe build and it’s certainly a good direction for the company (we at StorageReview definitely prefer NVMe as a primary system). In addition, ZFS and QuTS hero allow QNAP to deliver more data integrity and more enterprise-style features, including advanced block-based data reduction technologies and efficient snapshots.