For the ultimate road warrior or remote worker, two items generally dictate where you can work, internet access and power. With many phone plans now including some form of data tethering package, that leaves power availability as a core challenge for people on the road or trail. Enter in the Orico Power Station and 100W Solar Panel though and anywhere with sunlight becomes an option. In this review, we look at the 150 watt Portable Power Station paired up with the 100W solar panel kit to see how well they work with a Lenovo ThinkPad and cell phone.

For the ultimate road warrior or remote worker, two items generally dictate where you can work, internet access and power. With many phone plans now including some form of data tethering package, that leaves power availability as a core challenge for people on the road or trail. Enter in the Orico Power Station and 100W Solar Panel though and anywhere with sunlight becomes an option. In this review, we look at the 150 watt Portable Power Station paired up with the 100W solar panel kit to see how well they work with a Lenovo ThinkPad and cell phone. 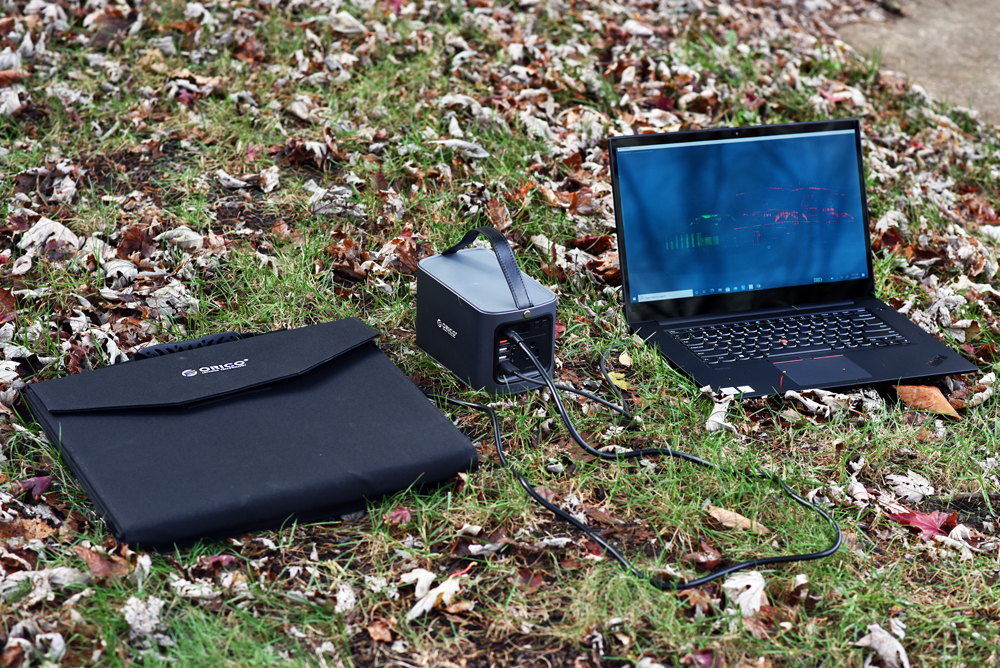 Orico has a ton of accessories targeting the WFH professional, including docking stations, SSD enclosures, and storage accessories. While many USB power banks are generally targeted towards cell phones and tablets, this one caught our eye offering power capabilities strong enough to handle mobile workstations. The icing on the cake though is users are able to quickly top off the Power Station using AC line power, or solar power. It even includes a LED light if the power drops. 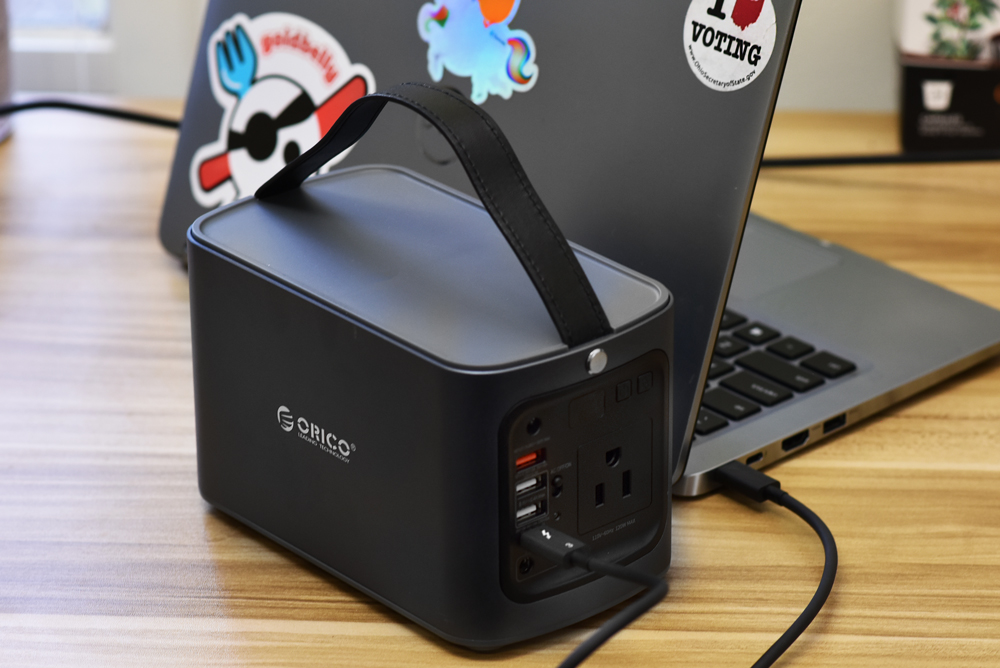 In our testing, we used a few devices from our lab including a Lenovo ThinkPad X1 Extreme, iPhone, and iPad. The Power Station is nearly universal with three USB-A ports, USB-C, and an AC power port to cover pretty much any device in its power range. It also includes two 12V DC power output jacks which you could use adapters with to charger or power other devices. This approach gives the power station some flexibility as well as some added efficiency benefits since if you don’t need the AC inverter portion, you are able to switch it on and off individually. There is always some efficiency loss going from DC to AC (and back to DC with power bricks) but being able to skip that step helps.

In our mobile testing, we had no trouble powering multiple devices at once, which was made possible through the numerous ports on the front. The USB-C power being rated for 60-watts of power delivery charged our notebook, although with the ThinkPad preferring its higher-output AC adapter we did get a “slow charger” warning. This is the same message which we’d find using a generic docking station as well. In our case though being able to power the notebook was the main advantage. For our lower-power devices, the USB-A ports offered fast charging capabilities. Using a USB power meter, we measured charging rates in excess of 10 watts to our iOS devices, with the main port supporting up to 18 watts out depending on the device.

Charging the Power Station is handled in many ways, including a supplied AC adapter or car AC power cable, as well as DC-power in from solar panels. With the power jack supporting up to 30 watts in, we measured about 36 watts of power draw from the supplied power adapter while the Power Station was getting topped off. When paired up with the Solar Panel kit, you’re limited to a 30W charging rate, since the bullet connector it uses as output would be the limiting factor. It should be noted that the Solar Panel Kit is designed for larger power needs, and can charge the Power Station and other devices at the same time. 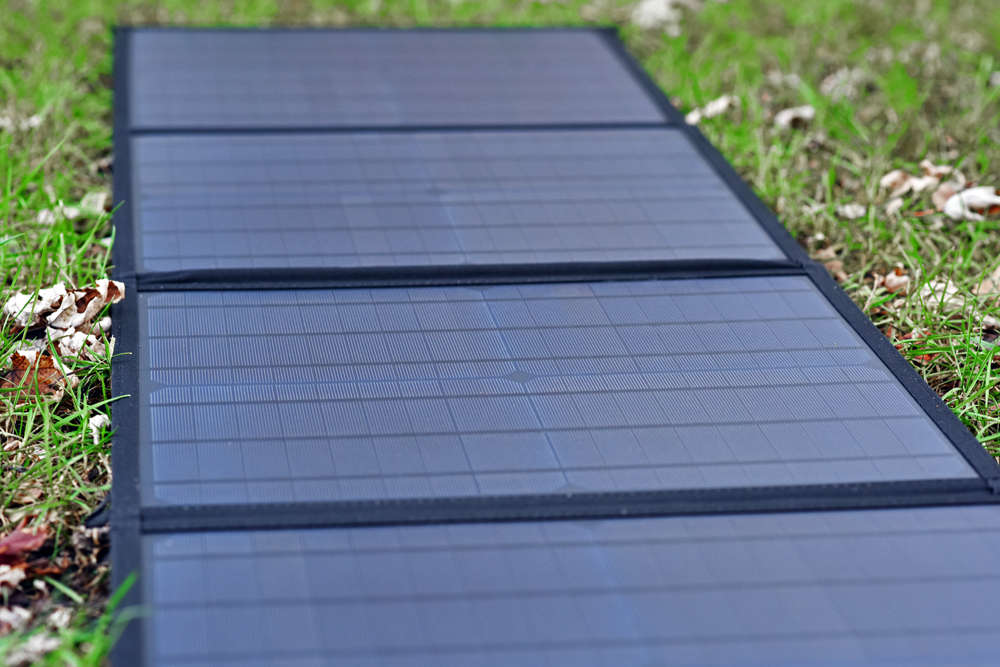 The Solar Panel kit is a good partner for the Power Station, although it’s not tied specifically to it entirely. It’s built with near-universal support of many devices, with USB-A power ports built-in, as well as a DC-output jack that can be adapted to different needs. This includes a bullet jack for things like the Power Station as well as locking solar-specific MC4 connectors used across many industry devices. With a good amount of sunlight, this allows you to charge a few devices at a time.

With many tests really limited to the power demands of your specific equipment, the amount of sunlight you have available, and even the angle of your location to the sun, your mileage will vary. The Power Station itself is rated at 160Wh, although there will be some efficiency differences based on how it is being leveraged. You will get more power from it using the DC-outputs for example than if you are only using its 120V AC power inverter.

We found it had plenty of power to keep our mobile devices topped off out in the field, and the solar panels worked to keep the Power Station charged. On a day with some rolling clouds and an average temperature floating in the low 30s, we brought the Power Station up from a 50% charge to a 63% charge in about 2 hours. The first hour the needle didn’t really change much as it was more cloudy, with the bulk charge happening as soon as full sunshine kicked in.

Overall the Orico Power Station and Foldable Solar Panel Charger offered a good mix for the ultimate road warrior. The Power Station was able to power a wide range of electronics (and bigger stuff with the 150W inverter) as needed and offered many charging options. If need to charge it from a car, in a home, at a gas station, or even out in the middle of a field there are options to charge it. Obviously, the most stable and consistent method is from a steady power source such as the AC adapter or car adapter, but sometimes you can’t be that picky.