The QNAP TVS-h1288x NAS is a recent addition to the company’s QuTS hero line of ZFS-based devices. ZFS allows for better data integrity and several enterprise features. The TVS-h1288x NAS uses an Intel Xeon W CPU, 14 total drive bays, and a vast array of options when it comes to expansion and connectivity.

The QNAP TVS-h1288x NAS is a recent addition to the company’s QuTS hero line of ZFS-based devices. ZFS allows for better data integrity and several enterprise features. The TVS-h1288x NAS uses an Intel Xeon W CPU, 14 total drive bays, and a vast array of options when it comes to expansion and connectivity. 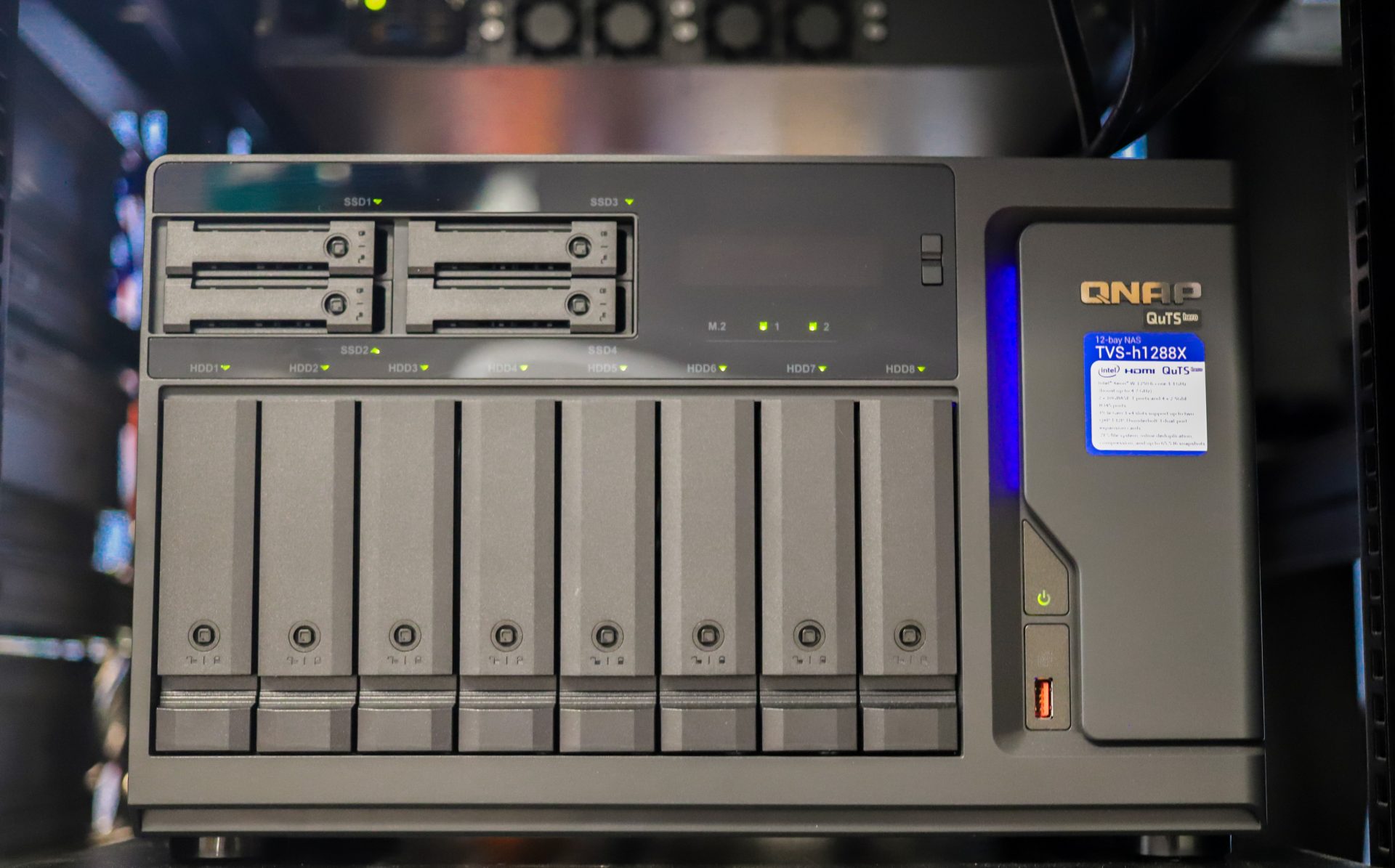 Let’s look at the hardware on this guy first. As mentioned, the NAS leverages an Intel Xeon W CPU giving it six cores and support for up to two QNAP QXP-T32P Thunderbolt 3 PCIe expansion cards for a total of four Thunderbolt 3 ports. This is great for fast file transfers from devices that support Thunderbolt 3, which is most of the newer computers.

The QNAP TVS-h1288x can support up to 128GB of ECC DDR4 RAM, though 16GB is more common. The ability to toss in extra RAM is critical for use cases that are going to leverage more of the enterprise features, like virtualization. For connectivity, the NAS has built-in 10GbE and 2.5GbE (though 5 and 25 can be added through expansion slots). 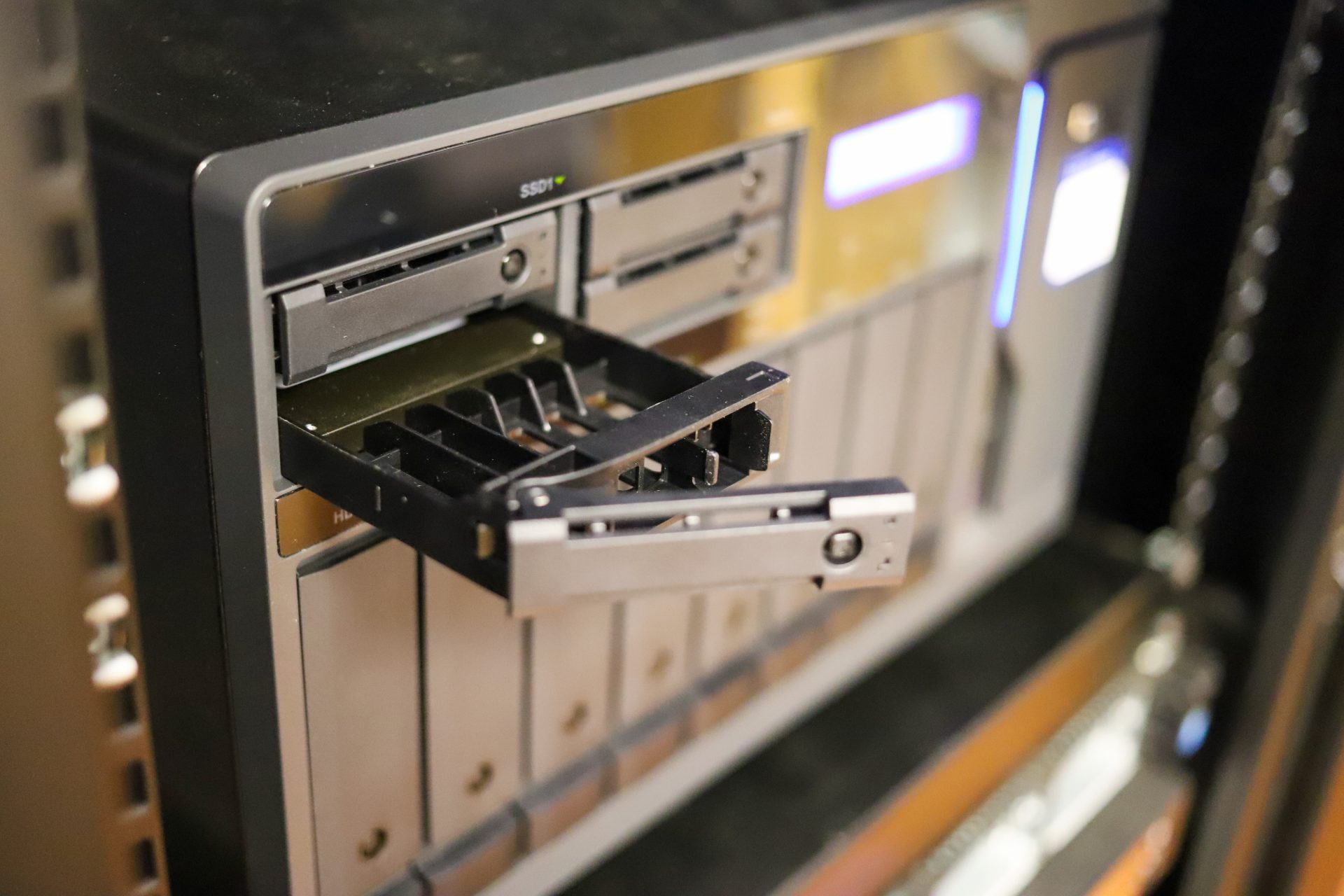 The TVS-h1288x has lots of options when it comes to storage as well. On the front of the NAS, there are 12 hot-swappable bays (4x 2.5″ and 8x 3.5″). All the front bays are SATA. For those looking to see a bump in storage performance, there are two NVMe M.2 slots on the side (under the cover) of the NAS. These slots can be used for caching, tiering, or for a high-performance volume.

There is also a 4K HDMI output and the NAS supports hardware decoding and real-time transcoding. This means HD content on the NAS can be viewed on a high-quality screen.

Most of the larger tower QNAP NAS units have similar builds. The QNAP TVS-h1288x is no exception. Across the bottom of the front are the eight 3.5″ bays for your high-capacity storage. The upper left has the four 2.5″ bays. The right side above the larger bays has an LCD screen for manually working on settings. The far-right has branding/model number, a power button, and a USB 3.2 Gen2 port. 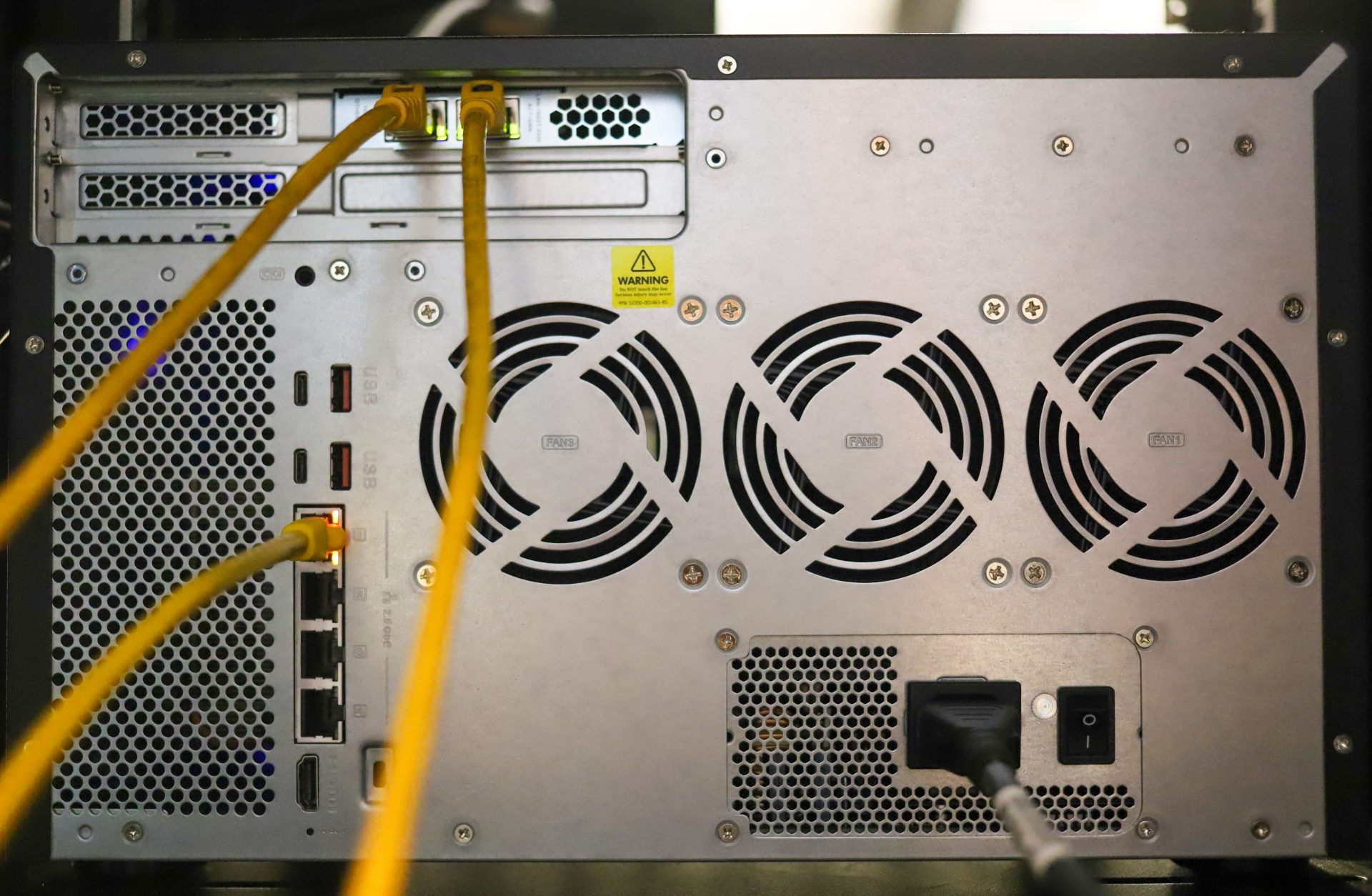 The rear is mainly taken up by the three fans for cooling. Below the fans are the power connection and the PSU on/off switch. The top left corner has the two PCIe Gen3 x4 expansion slots. Right next to them are the two 10GBASE-T Ethernet ports. Beneath those ports are the Audio in and out ports, followed by the rest of the USB ports, followed by four 2.5GbE ports, and the HDMI output. 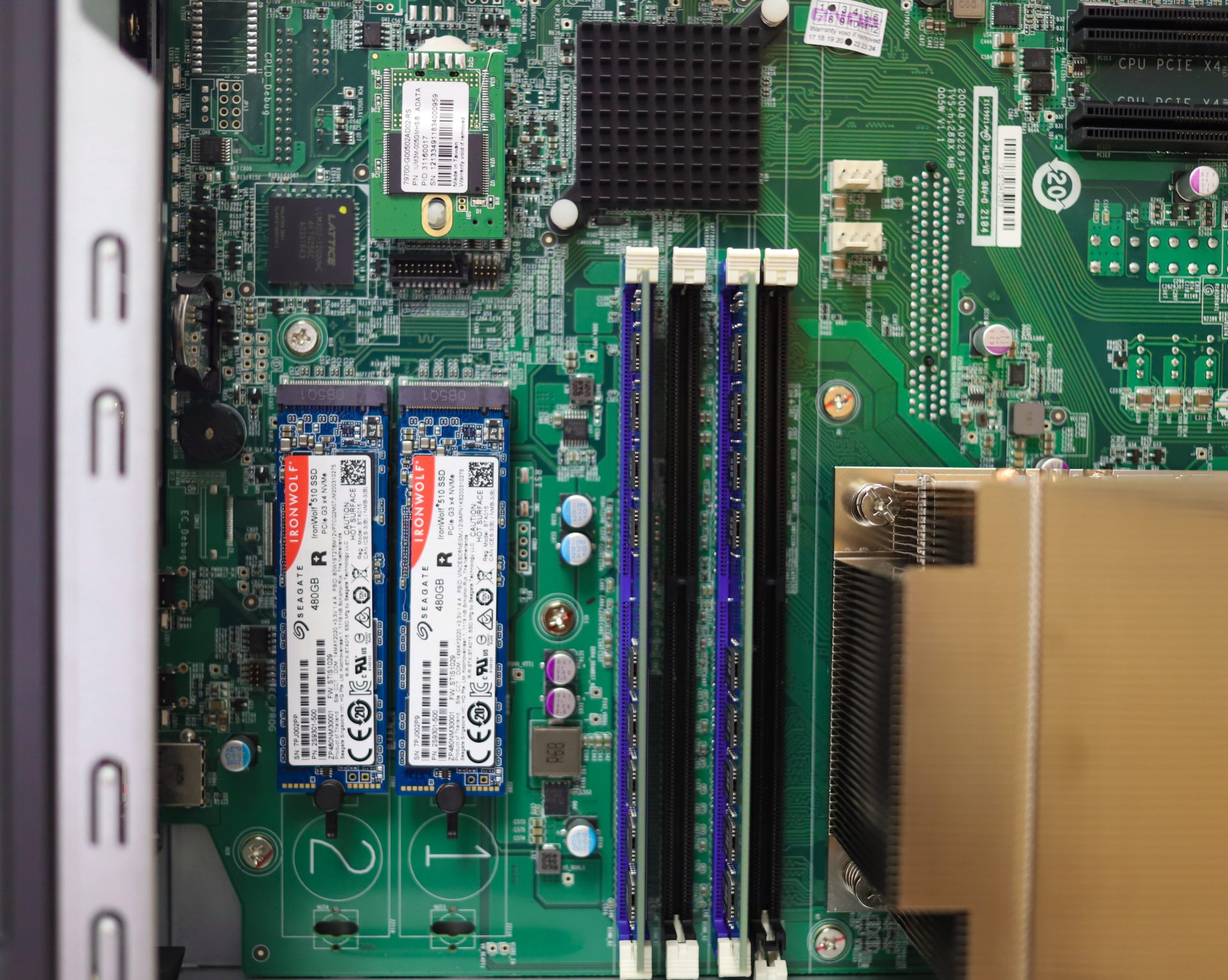 Lifting the cover off we can see the CPU covered by a heatsink. Next to that are the DIMM slots. And near the front are the two M.2 slots. As mentioned, this NAS leverages the QuTS hero operating system versus the regular QTS. While the two OSs aren’t terribly different, we did go into a bit more depth when we first review a hero system here. There should only be a mild learning curve between the two.

To test the QNAP TVS-h1288X we configured it using eight WD Red 14TB HDDs in a RAID6 storage pool. The filesystem for the SMB shares had compression and deduplication off and used a 32K block size. The 4 iSCSI LUNs were configured the same way, with a 32K block size and compression and deduplication turned off. For the footprint of each test, SMB tests leverage 4 25GB files placed inside the shares, while iSCSI tests utilize 4 25GB LUNs. For our testing, we configured the QNAP TVS-h1288x  in RAID6 in both iSCSI and SMB using an HDD configuration using the following drives:

Compared to the fixed 16 thread, 16 queue max workload we performed in the 100% 4K write test, our mixed workload profiles scale the performance across a wide range of thread/queue combinations. In these tests, we span workload intensity from 2 thread/2 queue up to 16 thread/16 queue. With throughput, we saw iSCSI slightly higher with a range of 418 IOPS to 2,199 IOPS. For SMB we saw a range of 384 IOPS to 2,060 IOPS. 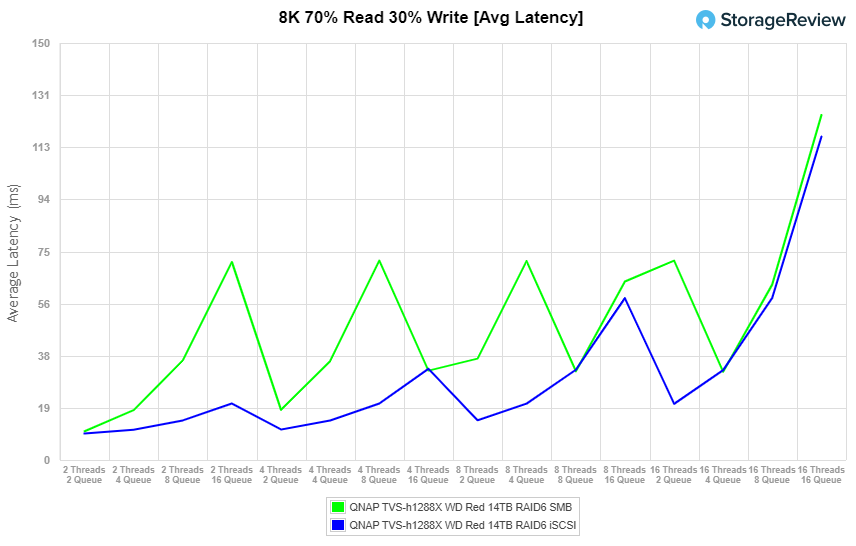 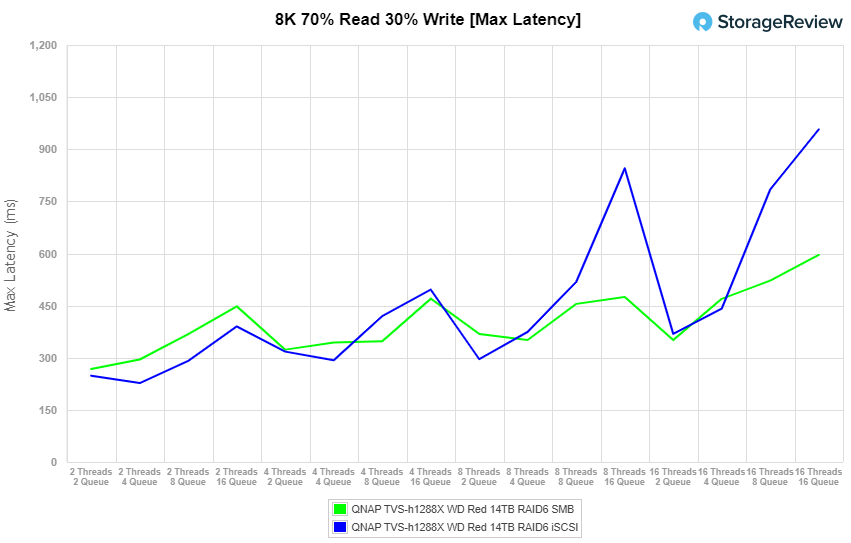 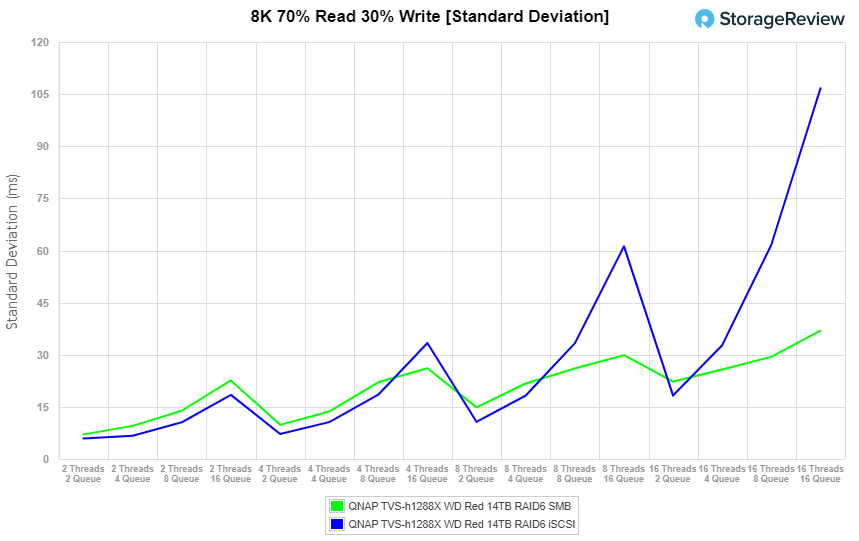 The QNAP TVS-h1288x is a tower NAS with 12 bays on the front for plenty of storage. The little “h” indicates that this is a QuTS hero version of the NAS, meaning that it leverages ZFS and the enterprise features that come with ZFS. The NAS uses an Intel Xeon W processor and can support up to 128GB of DDR4 RAM and 10GbE connectivity for optimum performance. The NAS has a creative professional bent with support for Thunderbolt 3 ports and a 4K HDMI output.

The QNAP TVS-h1288x leverages the QuTS hero operating system to provide creative professionals and small businesses with a ton of options when it comes to their storage. The NAS has plenty of performance options as well, though it did really well in our benchmarks as shipped. Overall QNAP continues to be one of the most flexible NAS solutions around, the NVMe M.2 bays are the most usable (cache/tier/volume) in the category for instance. The TVS-h1288x hits an excellent mix of features and configurability making it one of our favorites in this price range.